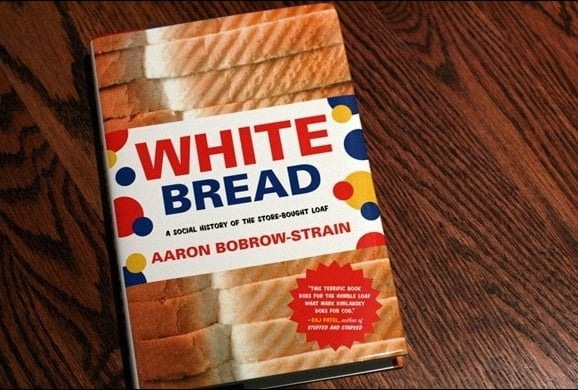 I have something a bit different for you all this afternoon, just to mix things up — a book review! 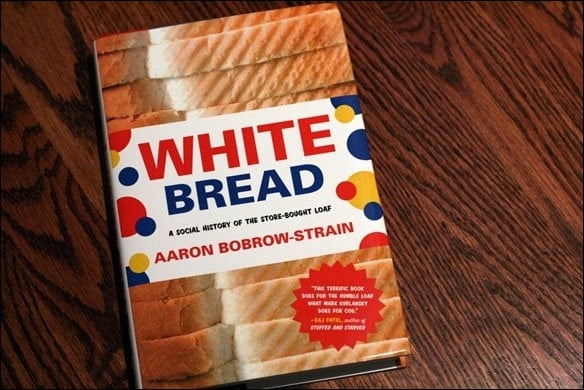 I don’t usually do book reviews because I’m so busy with grad school, but when I got an email about reviewing White Bread: A Social History of the Store-Bought Loaf, the former undergrad Sociology major in me was intrigued. I’ve been working my way through the book over the past month or so (I always try to read for pleasure for at least 15 minutes before I go to bed every night — such a nice way to unwind!), and I’m so glad I gave it a chance. I haven’t quite finished the book yet, but so far I’ve found it fascinating. 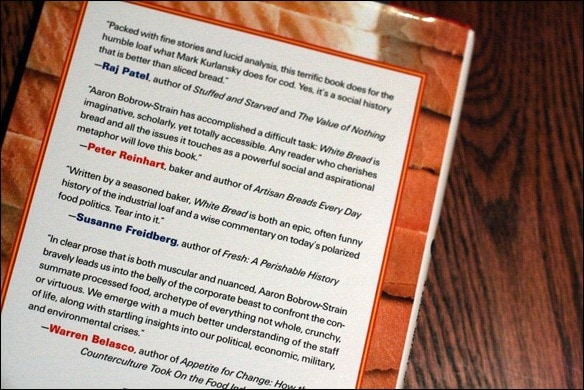 If you love books like “Fast Food Nation” and anything written by Michael Pollan, you will love this book. It’s a fascinating look at the social history of our nation through bread.

Here’s a brief version of the write up from Amazon:

How did white bread, once an icon of American progress, become “white trash”? In this lively history of bakers, dietary crusaders, and social reformers, Aaron Bobrow-Strain shows us that what we think about the humble, puffy loaf says a lot about who we are and what we want our society to look like.

White Bread teaches us that when Americans debate what one should eat, they are also wrestling with larger questions of race, class, immigration, and gender. As Bobrow-Strain traces the story of bread, from the first factory loaf to the latest gourmet pain au levain, he shows how efforts to champion “good food” reflect dreams of a better society–even as they reinforce stark social hierarchies. Given that open disdain for “unhealthy” eaters and discrimination on the basis of eating habits grow increasingly acceptable, White Bread is a timely and important examination of what we talk about when we talk about food.

To make this book review a bit more fun, I asked the book’s author, Aaron Bobrow-Strain, to share a guest post with some homemade bread baking tips, since he’s an avid baker himself. Without further ado — enjoy! 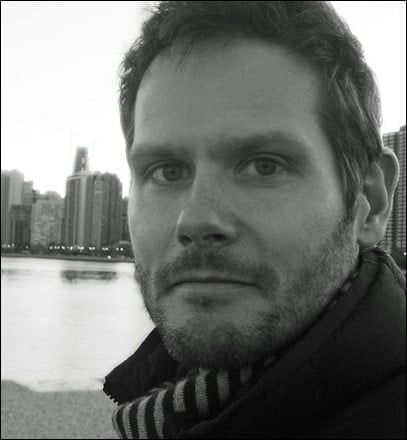 A terrible thing happened to bread baking advice around 1915. Swept up in a culture obsessed with experts and technological perfection, cookbook writers, home-ec teachers, and food columnists expunged all references to art, instinct, and craft from their work. In their minds, baking was a tricky, time-consuming feat of chemistry and engineering, best left to lab-coated scientists in gleaming factories.

For reasons I explore in my book, generations of Americans embraced this idea, and still do. Some of us may substitute “hipster artisanal bakers” for “lab-coated scientists,” but the basic idea is the same: home baking is hard, maybe impossible–certainly for someone juggling endless responsibilities and a busy schedule.

My book shows that our ideas about bread and baking tell us a lot about who we are as a nation, how we understand progress, how we envision America’s role in the world, what we believe counts as responsible citizenship, and, ultimately, how we relate to each other across our differences. But I’m also a baker, and I like to encourage others in that direction. So, here is my number one rule of thumb for people who have wanted to bake European-style artisan breads, but haven’t taken the plunge:

Artisan Bread Is More Flexible and Forgiving Than You Think

Baking artisan bread takes a lot of time–formulas for making richly flavored European breads out of minimal ingredients (flour, water, yeast, and salt) call for long, slow fermentation (sometimes as much as 18 hours). But, for most of that time, the sugar magic of Saccharomyces cerevisiae (baking yeast) does all the work. You can be doing other things.

More importantly, the timing of bread baking is far more pliant than most recipes suggest–even ones purporting to be “easy” or “everyday.” You can fit artisanal bread baking into the nooks and crannies of your busy schedule. Just remember one thing: temperature. Warmer temperatures speed up fermentation, cooler temperatures slow it down. This knowledge gives you considerable control over when the “busy” parts of baking happen.

Here’s an example: I like to bake bread on Saturday–my more-or-less free day. A couple weeks ago I mistimed things and had to take my son to a soccer game at exactly the time when I was supposed to be proofing and then baking my loaves. No problem. I shaped the loaves and stuck them in the refrigerator, slowing their rise dramatically. When I returned from the game, I just picked up where I had left off. The result was some of the best tasting bread I had made in a while (many professional bakers deliberately “retard” their dough in a special refrigerator to promote flavor development). Had I thought ahead, I could also have achieved a similar effect by using colder water at the start, or allowing the dough to do its first rise in a cooler spot.

Using the same rule, you can speed up fermentation, if needed. Industrial bakeries love this. They ferment dough in sweltering, miniature tropical rainforest environments to churn out fluffy loaves fast. A simple homemade “proofing box” can achieve similar results: just place a big plastic storage tub over your dough along with a pan of boiled water. It creates a hot steamy environment that promotes speedier rising. Warning: speeding up fermentation is great for loaves that get their deliciousness from sweeteners, spices, herbs, etc. If you are trying to eke rich nutty flavor out of flour, water, yeast, and salt, you are better off with slow fermentation.

Even if none of those strategies work, just remember that no matter how much you mess up the timing of the recipe, your results are still homemade and delicious. Last week I had a meeting on Saturday (how ridiculous is that?), and I thought I was prepared: I had mixed my dough with ice cold water and stuck it in a cool place to proof. But I wasn’t prepared for the meeting to go two hours over. When I got home, the loaves were beyond over-proofed and I hadn’t even pre-heated the oven. I baked them anyway. They collapsed.

Instead of lofty, bursting domes of golden French pain au levain, my loaves looked like French berets run over by a bus. But they tasted good, and, thanks to the extra-wet dough recipe I had used, were still full of bright shiny holes. I called them ciabattas and no one knew the difference.

Aaron Bobrow-Strain is the author of White Bread: A Social History of the Store-Bought Loaf (Beacon 2012). His writing has also appeared in Gastronomica and The Believer.

Do you guys bake your own bread at home? I bake quick breads a lot, but have still never gotten up the courage to try my hand at yeast bread. Someday. 🙂 Any favorite recipes to share? 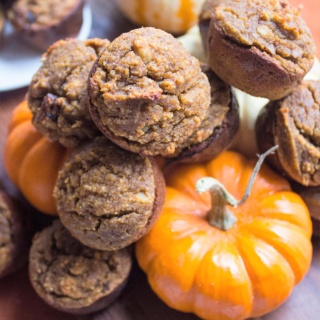 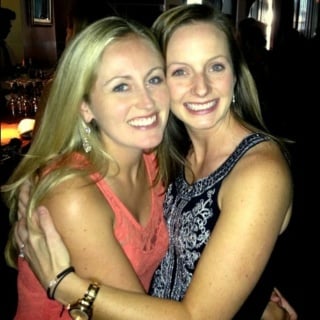 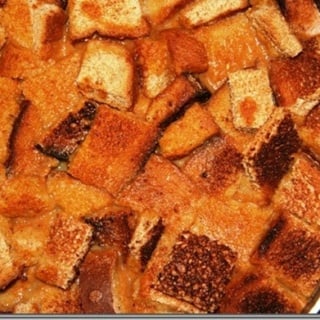