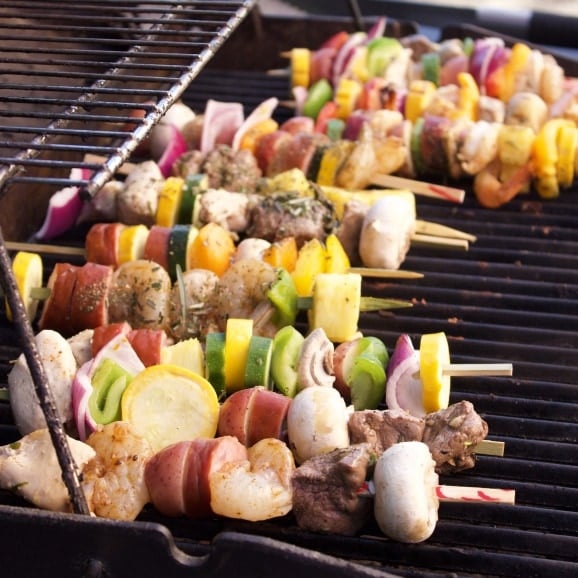 Thank you to OLD BAY for sponsoring this post!

Hi guys! I’m back with one final Outer Banks beach vacation recap, this time all about our big group dinner featuring create your own kabobs! 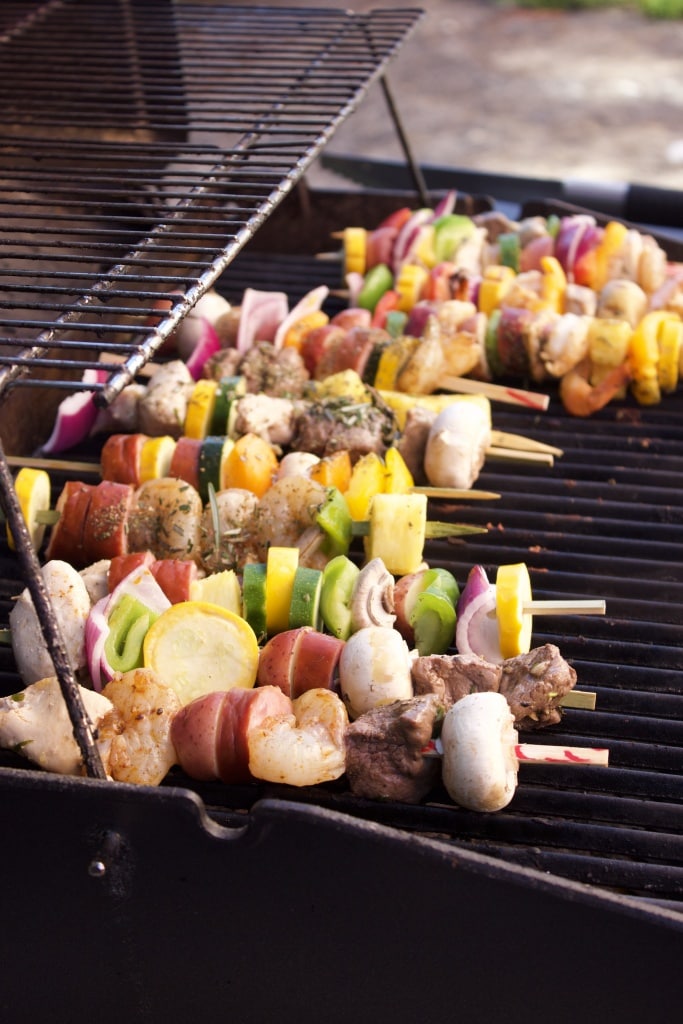 We go to the beach with Matt’s family and a big group of family friends for a week every summer. One night every year, my father-in-law, who is a big foodie and a great cook, hosts a massive group dinner for everyone. He plans for the event for months, and we all eagerly wait to hear what the theme will be. In the past, we’ve been treated to some delicious feasts, including made to order pasta night, a fish fry, seafood paella (so pretty!), and a Mexican fiesta with make your own tacos and margaritas.

This year’s theme was Create Your Own Kabob night – creative and so fun! 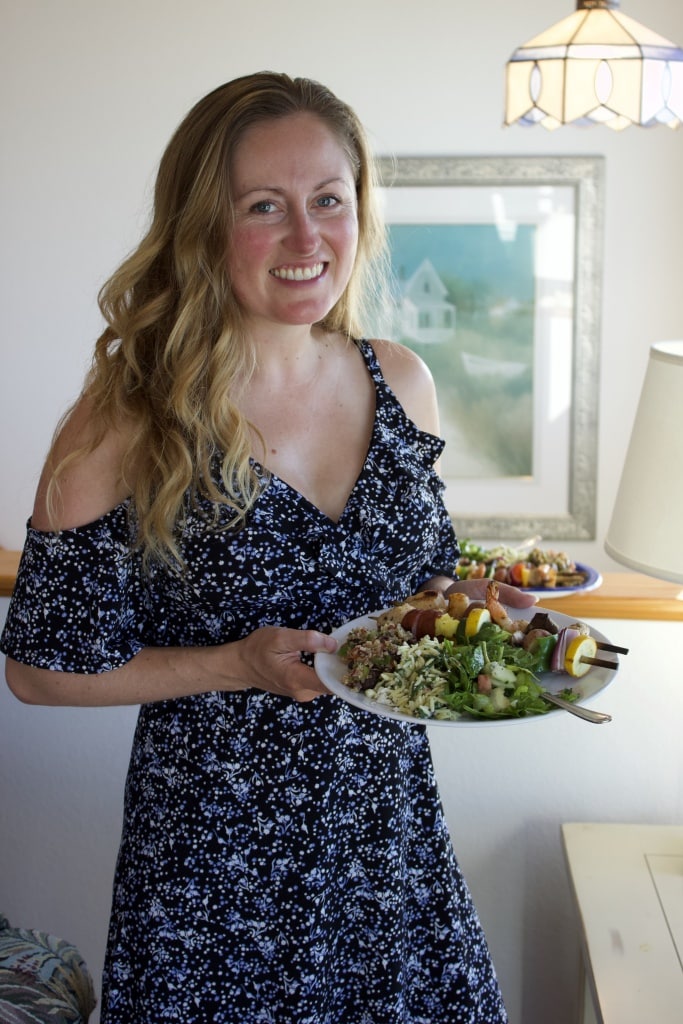 The added twist that made the meal even more unique was that the food (and the drink!) were spiced up with the inclusion of OLD BAY! I’ve always been a fan of OLD BAY – the smell of the delicious seasoning just screams “summer” to me, and I love that it originated close by along the Chesapeake Bay. Knowing that OLD BAY is the perfect addition to beachy food gatherings, I reached out to my father-in-law to see if we could come up with some ways to incorporate OLD BAY into make your own kabob night at the beach. He was all about it – more than up for the challenge! Especially since this sweet apron was involved. 😉 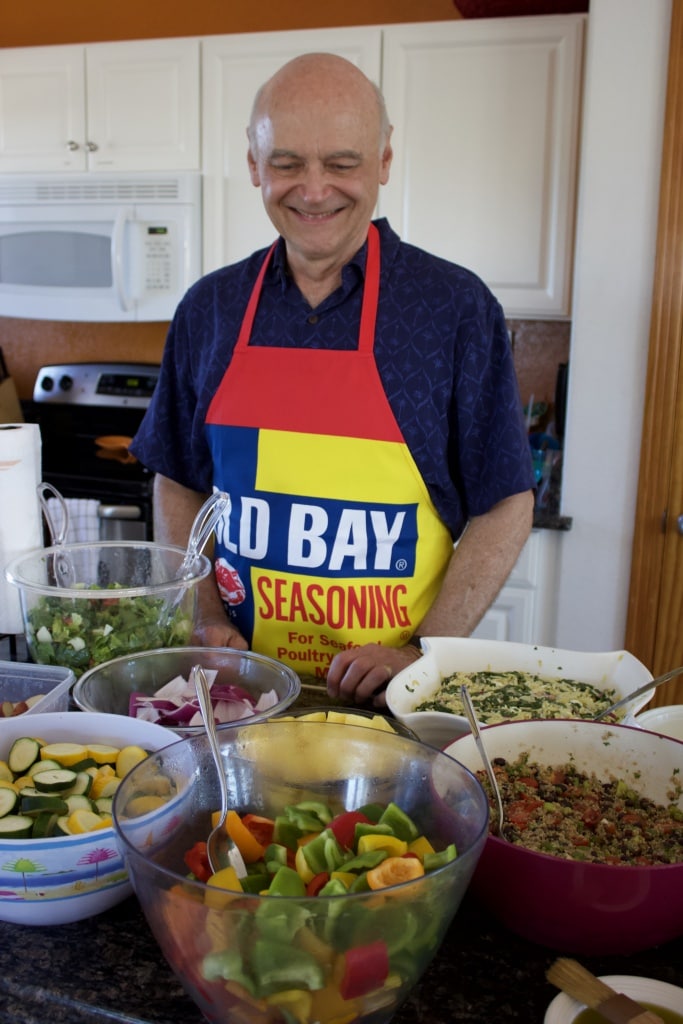 To kick off the festivities, we had OLD BAY lemonade! There was also liquor in case anyone wanted to turn it into a cocktail. 😉 The glass rims were wet with juice from a lemon wedge, and then they were dipped into a mixture of sugar and OLD BAY. A twist on the classic salted margarita glass rim! (Sidenote: my brother-in-law is a photographer based in NYC – as well as an actor and a fitness instructor… he wears many hats – and he had fun working with me to stage and shoot some of the pictures in this post. A team effort – thanks for your help, Drew!) 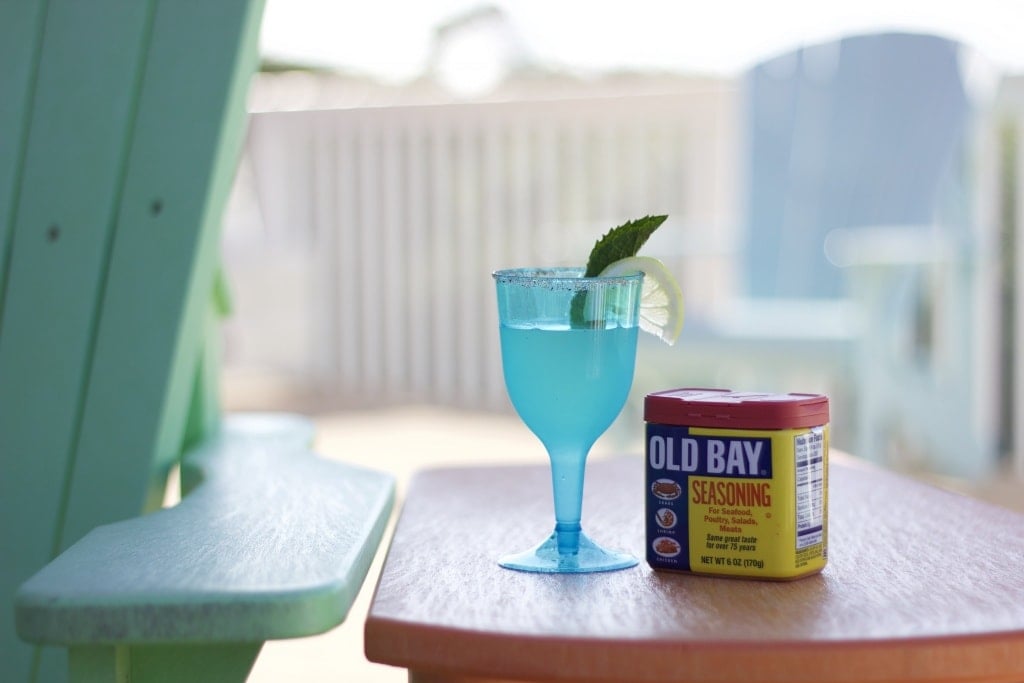 For those who were more interested in beer, we had OLD BAY koozies. They were quite the hit – even Riese was into them. 😉 p.s. How cute is her watermelon dress?! I got it at a yard sale for $3 – total win. 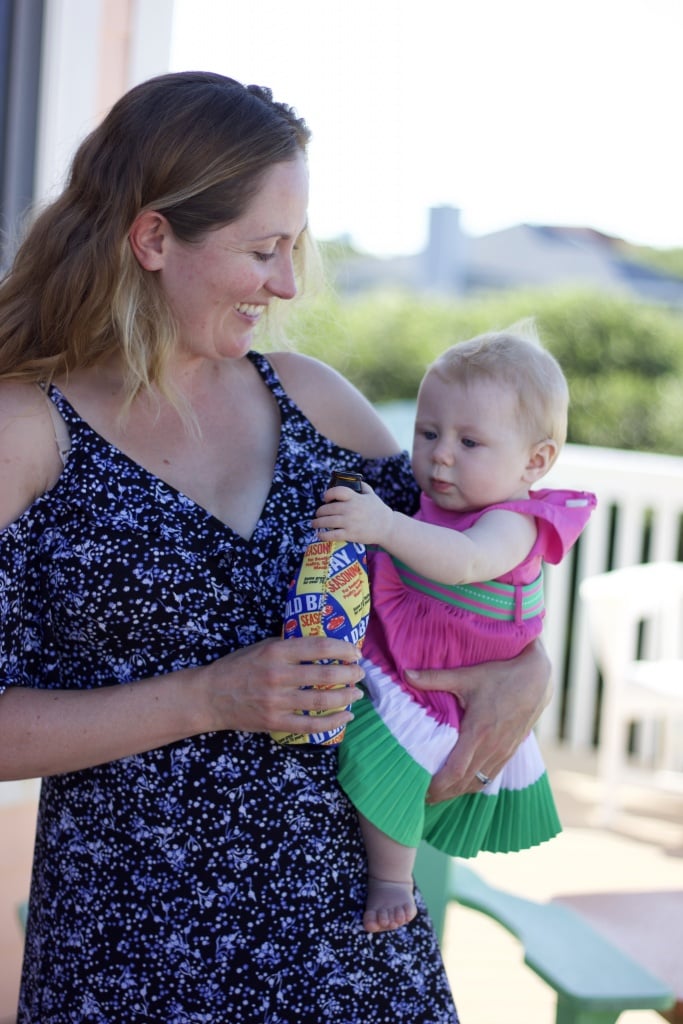 While everyone enjoyed their drinks, they also started putting together their kabobs! My father-in-law had a big spread of kabob layering options ready for everyone to choose from.

For the kabobs, we had: 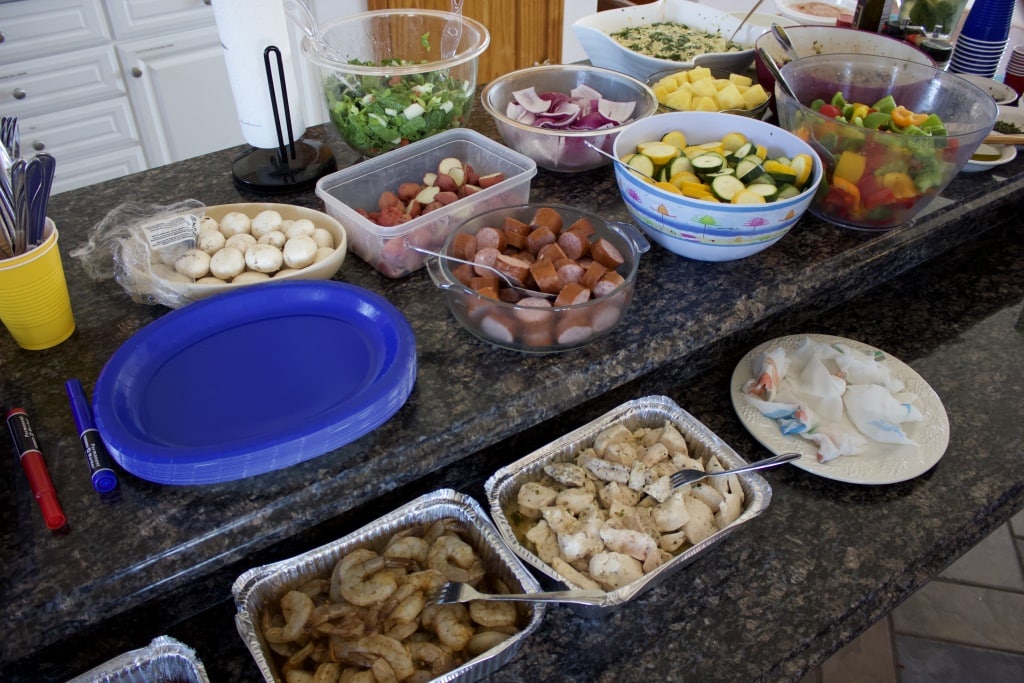 There were also some side salads to round out the meal: a Greek salad, a delicious lemony orzo spinach salad, and an OLD BAY-infused quinoa salad (this recipe minus the salt and red pepper flakes and plus 1/2 tablespoon of OLD BAY). 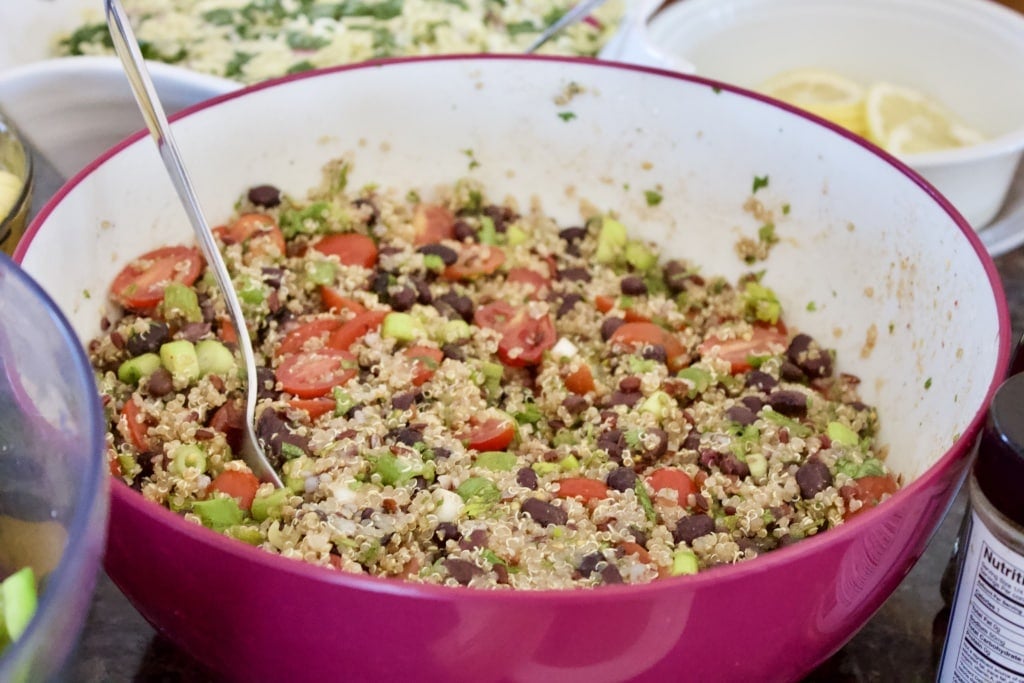 In addition to the quinoa salad, OLD BAY was featured in the protein offerings – specifically the shrimp and the chicken. For the shrimp, here is the rough recipe for the marinade that my father-in-law used. He let the shrimp sit in the marinade for about an hour before it was go time.

For the chicken and steak, he used the recipes from this Food Network post – the dijon-rosemary steak and the citrus-tarragon chicken. He did the steak as the recipe called for, but for the chicken he left out the salt and pepper and instead added 1 tablespoon of OLD BAY. 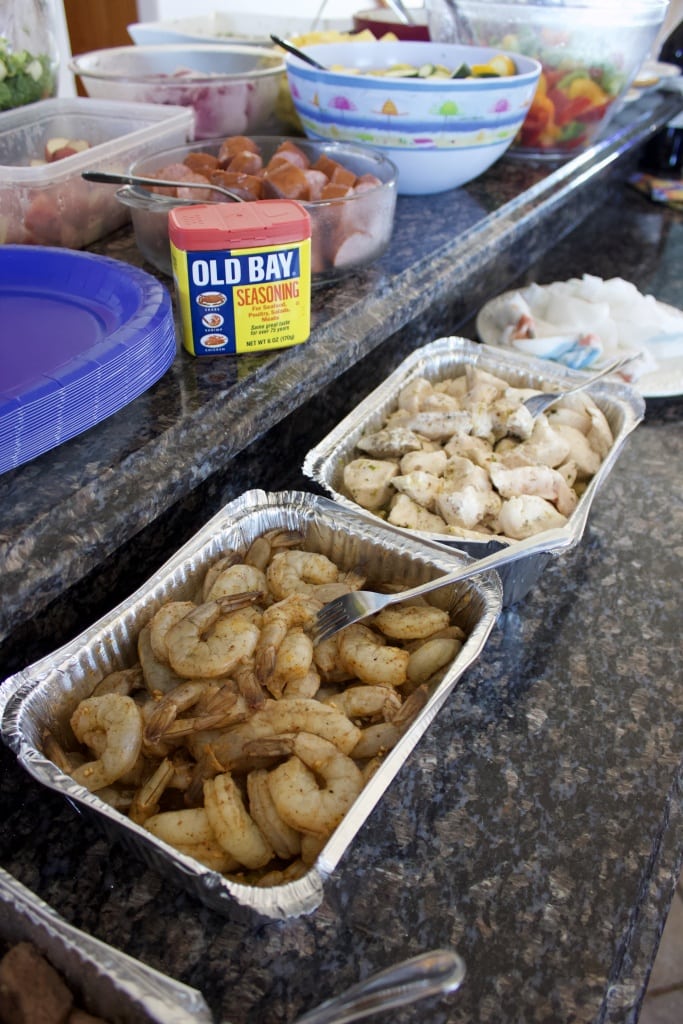 One thing that I thought was really smart was that my father-in-law pre-cooked the meat (except for the shrimp, since it’s so quick cooking). He used a sous vide method to pre-cook it all, but you could also use a grill, bake the meat, or pan sear it! Having the meat already fully cooked meant that a) no one was handling raw meat, and b) the kabob grilling was really fast because it was just to add some heat and flavor and to soften the veggies vs. to fully cook the meat. If you want to do a sous vide approach (here’s a great overview/more info about cooking sous vide) like he did, you cook the meat first without the marinade, then add the marinade in once it is cooked. It sat in the marinade for 2-3 hours. If you want to pre-cook the meat using the stove or a grill, marinate first as per the original recipe.

Everyone quickly got to work building their kabob creations! I loved how colorful and varied they were. 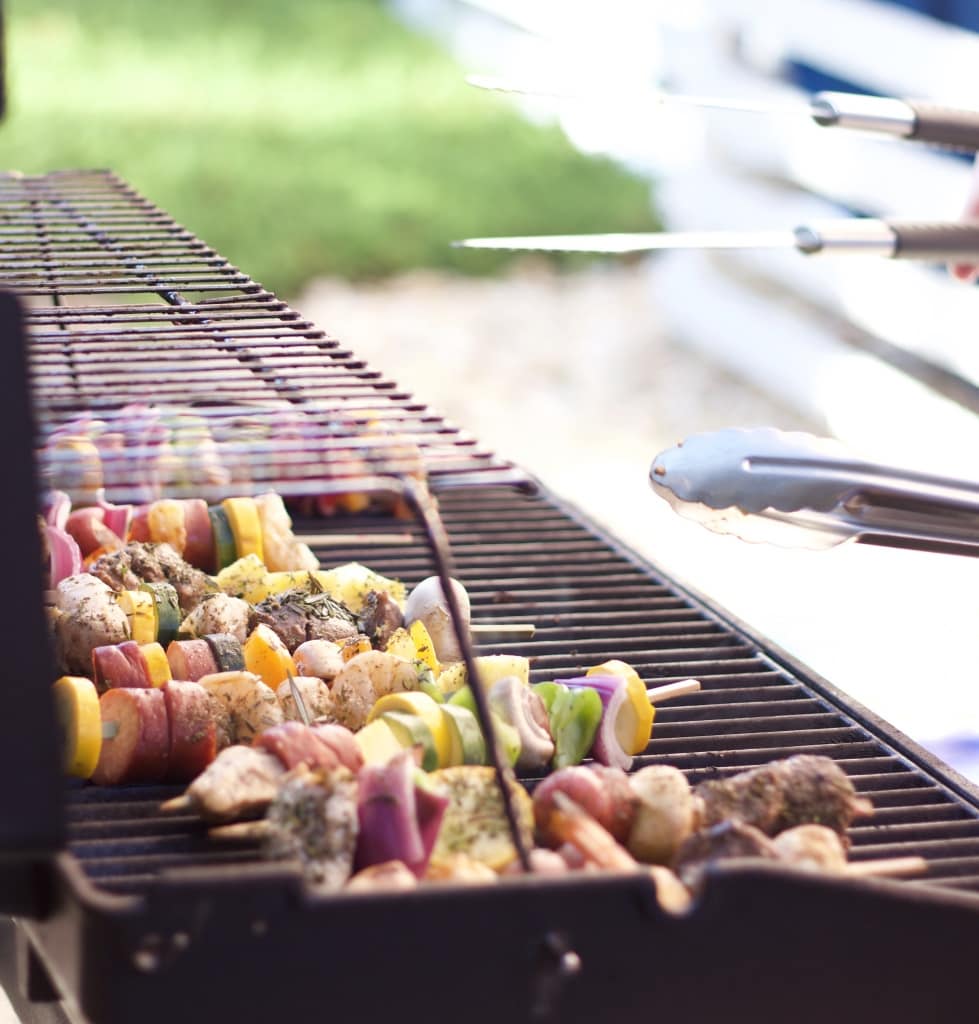 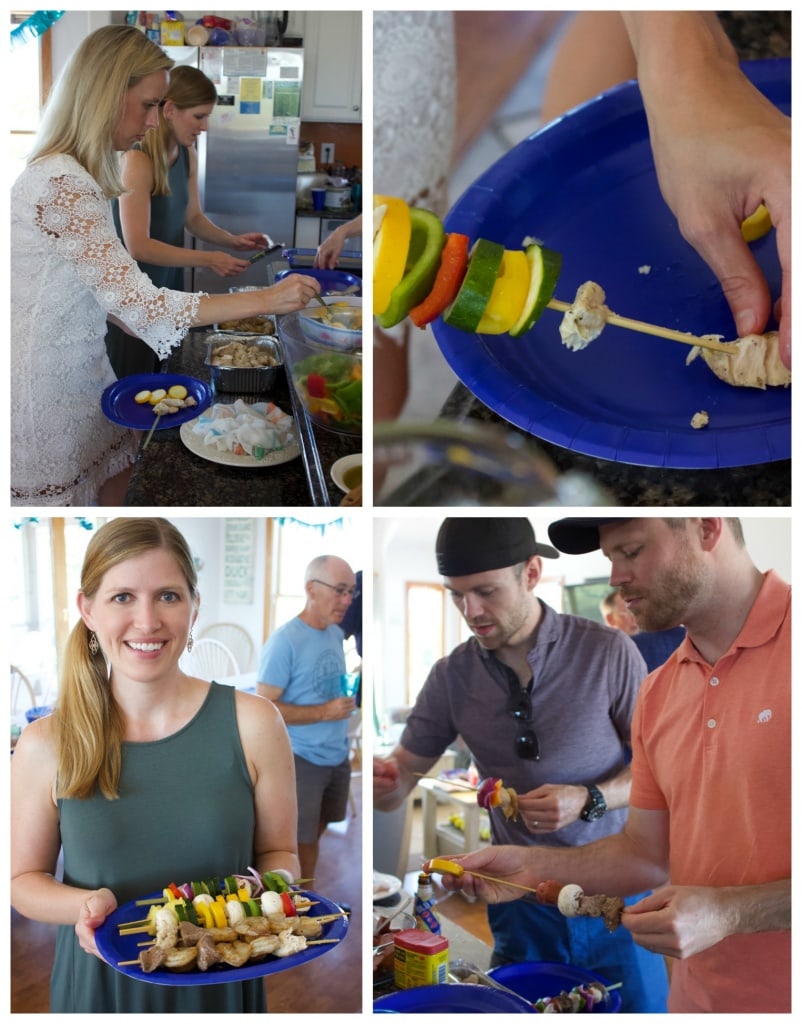 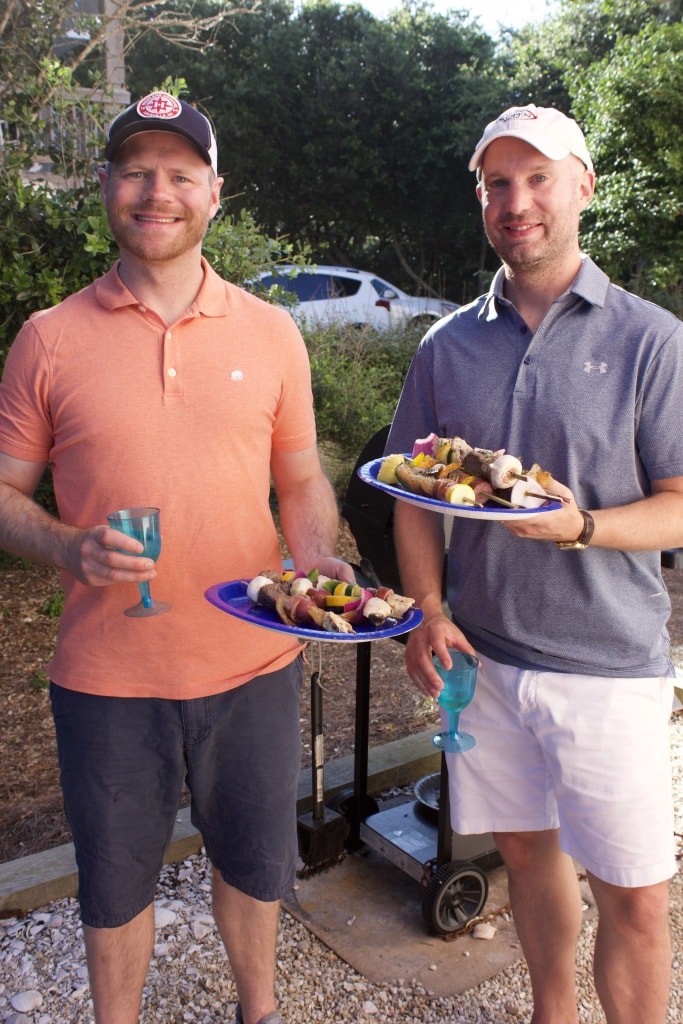 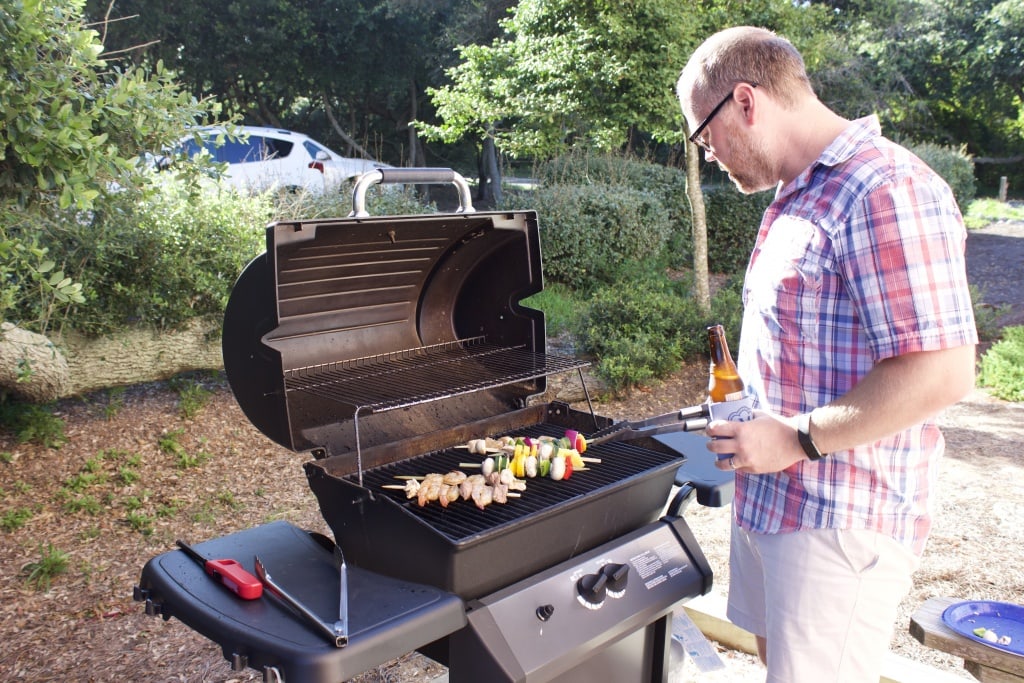 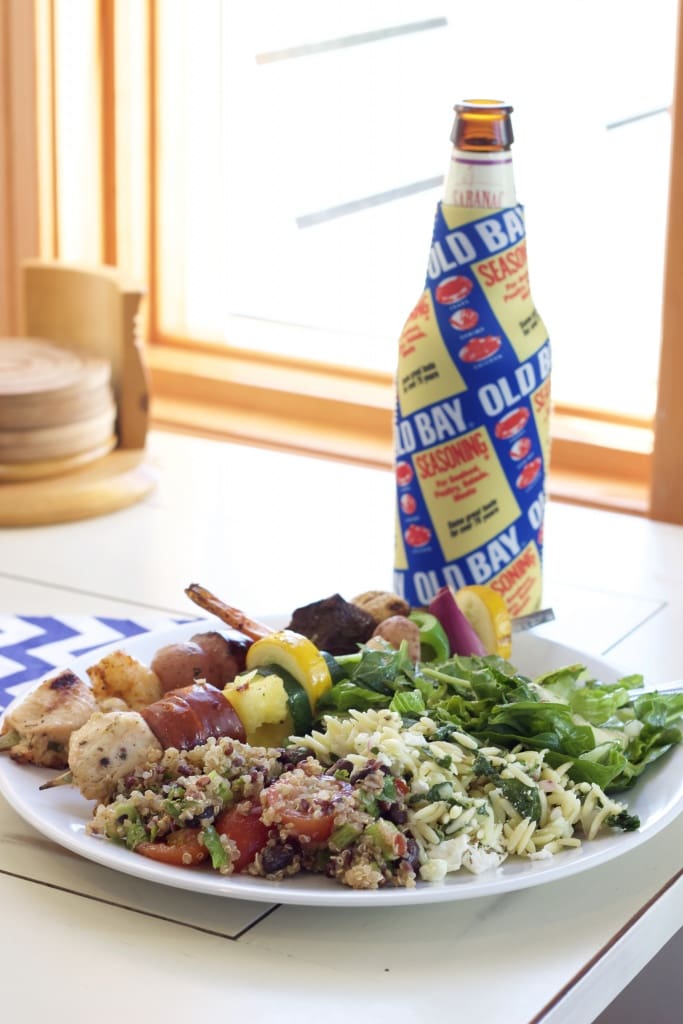 Such a fun and delicious evening! 10/10, would OLD BAY kabob again. 🙂 Thanks to OLD BAY for being the inspiration behind bringing our family and friends together for a yummy meal at the beach this year! 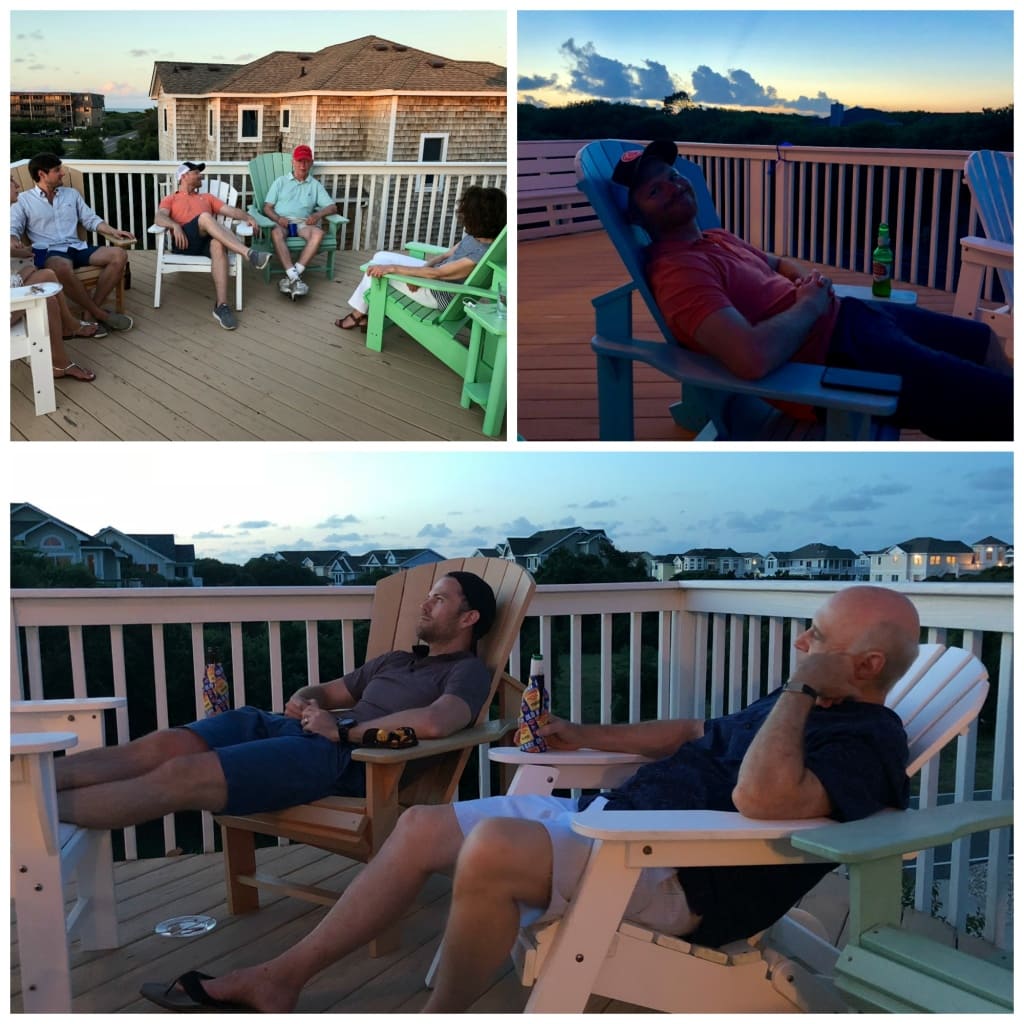 Want to get in on the action and enter to win a season’s supply of OLD BAY seasoning and fun swag like the apron and koozies in this post? Share a photo on Instagram using the hashtag #OLDBAYOurWay by August 17, featuring how you celebrate summer together with friends, family, and OLD BAY. For more details and to officially enter, click here.

What your favorite way to use OLD BAY seasoning? 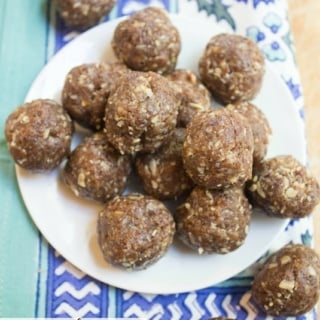 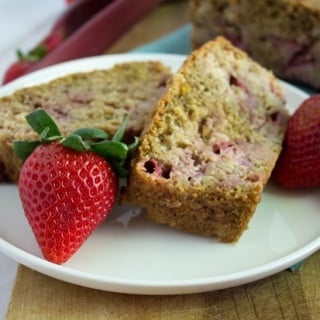 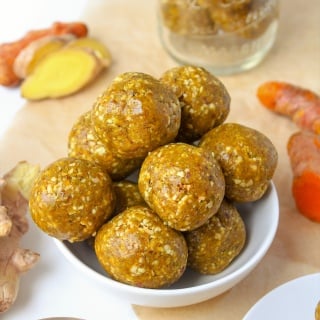 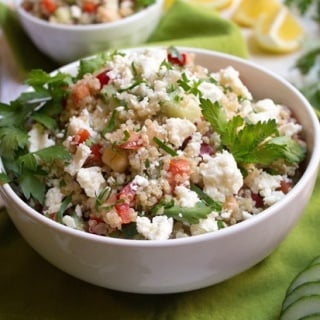