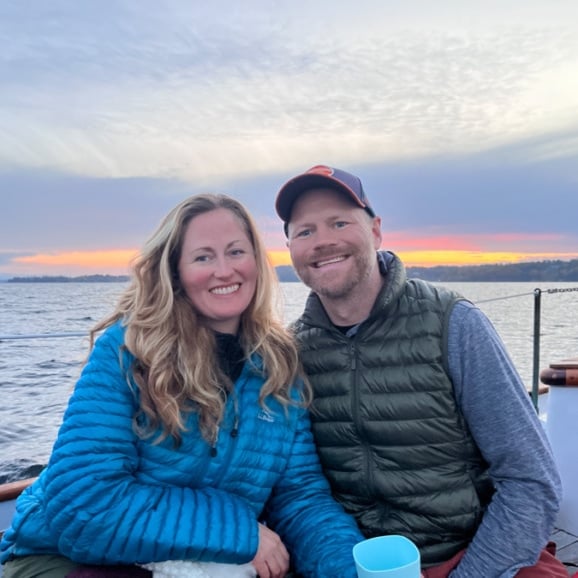 I’m back with my final 10 year anniversary trip recap! This one is all about the last day of our trip, during which we actually drove south a couple hours and spent the day in Camden, Maine.

In case you’re wondering, it turns out Camden is super adorable, and right on the water. 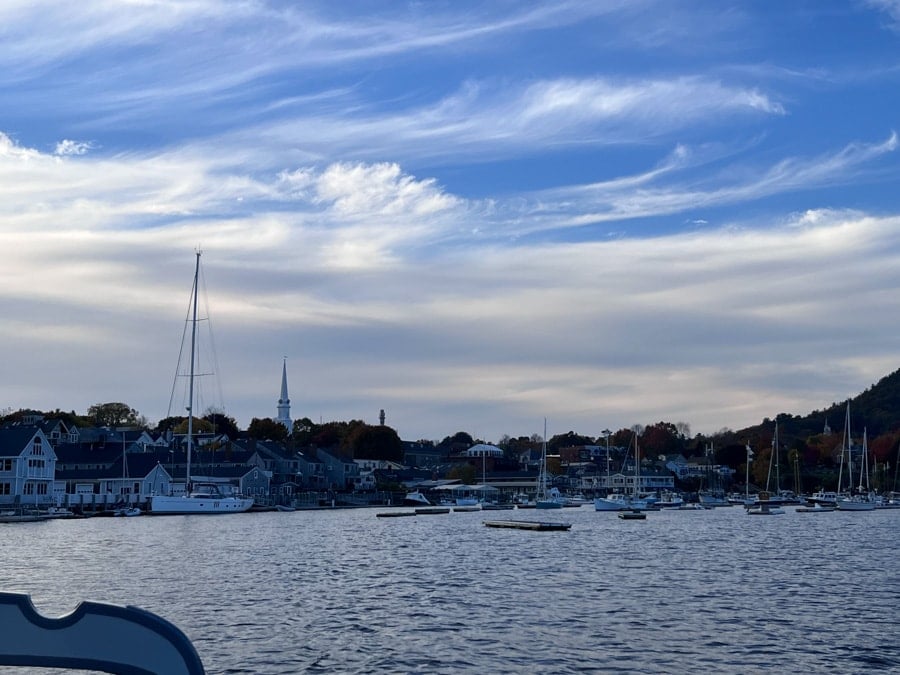 If you missed the previous Maine anniversary trip recap posts, check those out first:

As soon as we decided that we were going up to Maine for our anniversary trip, I knew I wanted to make sure to meet up with my college friend Lu (that’s her nickname – real name is Laura) and her husband Connor, who live down near Portland.

They were originally going to come up our way for a hike in Acadia, but when Matt and I arrived we saw signs everywhere for a marathon happening in and around Acadia on the day we planned to meet up. Probably not the best day to try to navigate the park or to be driving around the area, we decided!

We decided to meet up in Camden, Maine, instead, which was roughly in the middle between our locations, and which was home to Camden Hills State Park, so we could still do some hiking. Perfect!

Matt and I had breakfast at our hotel and then drove about 2 hours south along the coast to meet them. I was so excited to see them! Last time we hung out was their wedding in summer 2019. <3 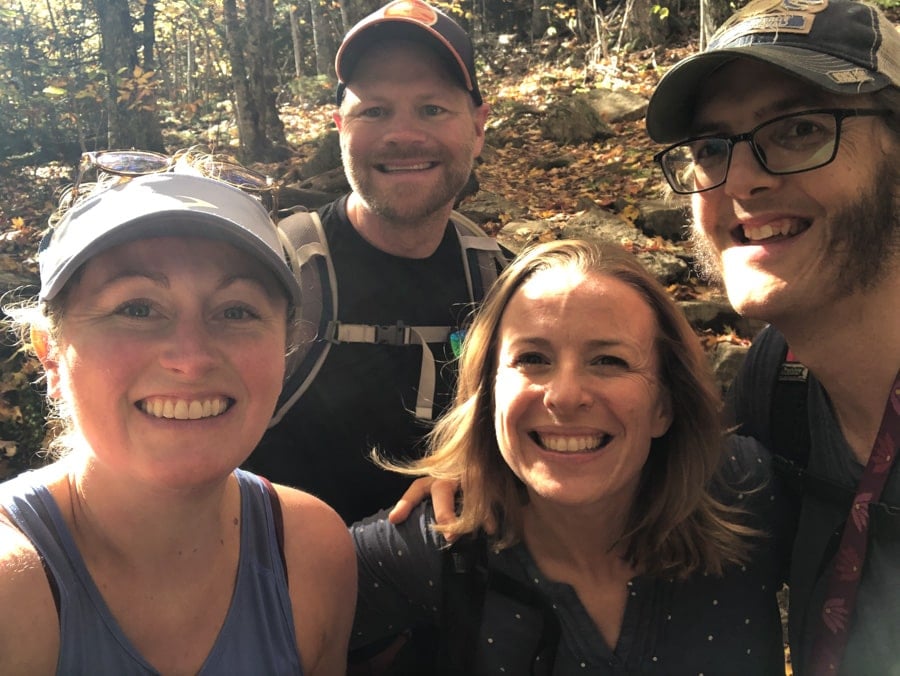 We had an absolutely gorgeous day for a hike – the sky was super blue and the fall colors were in full force. Amazing! 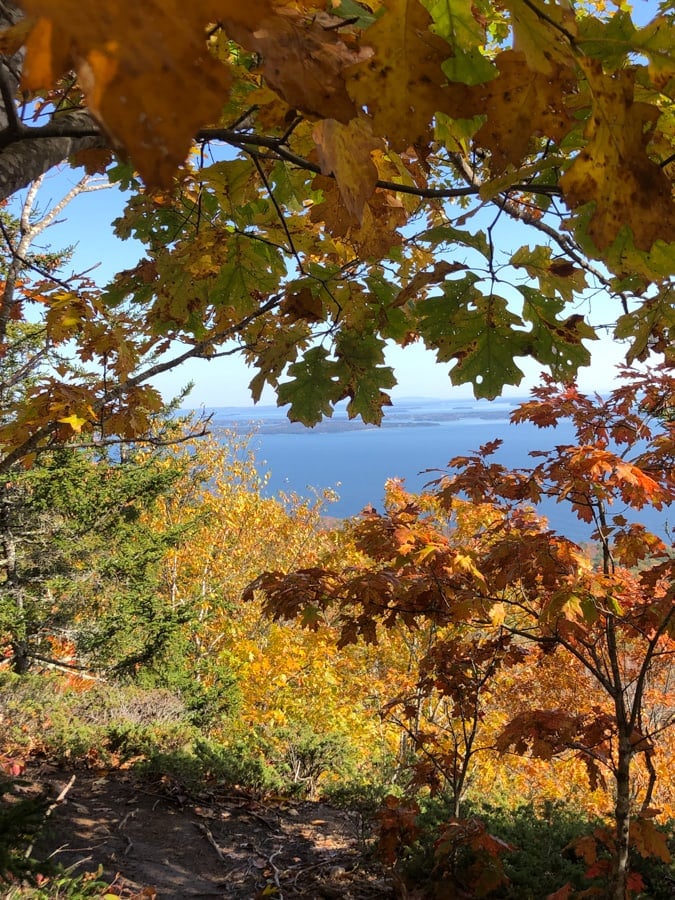 We started on the Adams Lookout Trail, and I think also looped around onto some other trails (the guys were in charge and I was just along for the ride, so I didn’t pay a ton of attention to directions).

It was a decent sized park – we were able to hike around for a few hours!

Matt and Connor were mostly ahead and Lu and I took our time as it was quite steep in some parts. Plus, we were busy chatting away the whole time. We aren’t great at keeping in touch virtually but whenever we are together it’s like no time at all has passed! 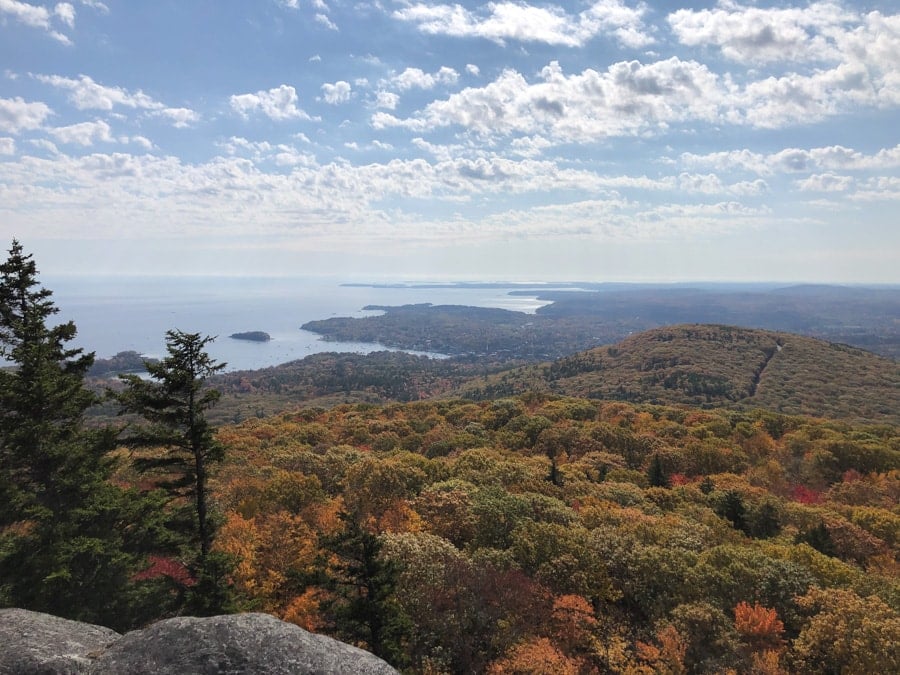 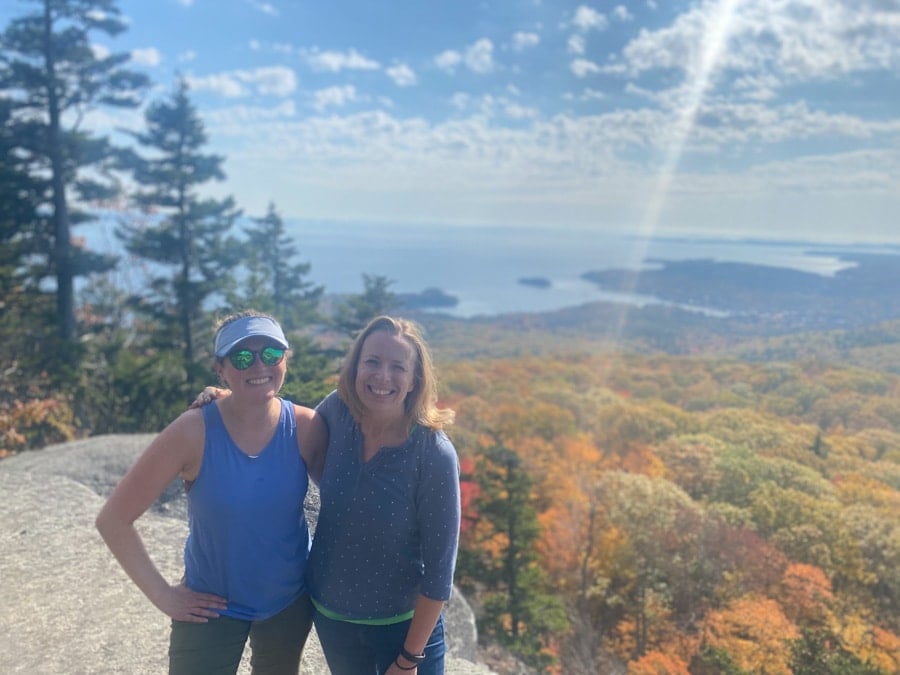 Lu and Connor were nice enough to pack us all a picnic lunch for the hike, and it was really yummy. Delicious bread topped with hummus, roasted veggies, and pickles!

I would not have thought to add the pickles and it was a very solid addition. 🙂 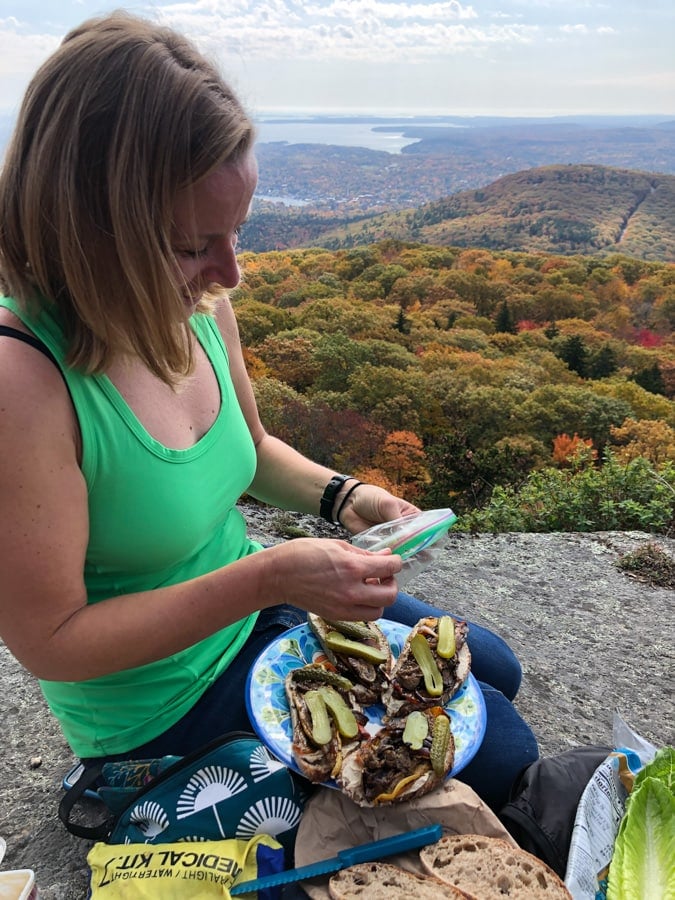 We also had some carrots, apples, and cookies. Yum, yum! 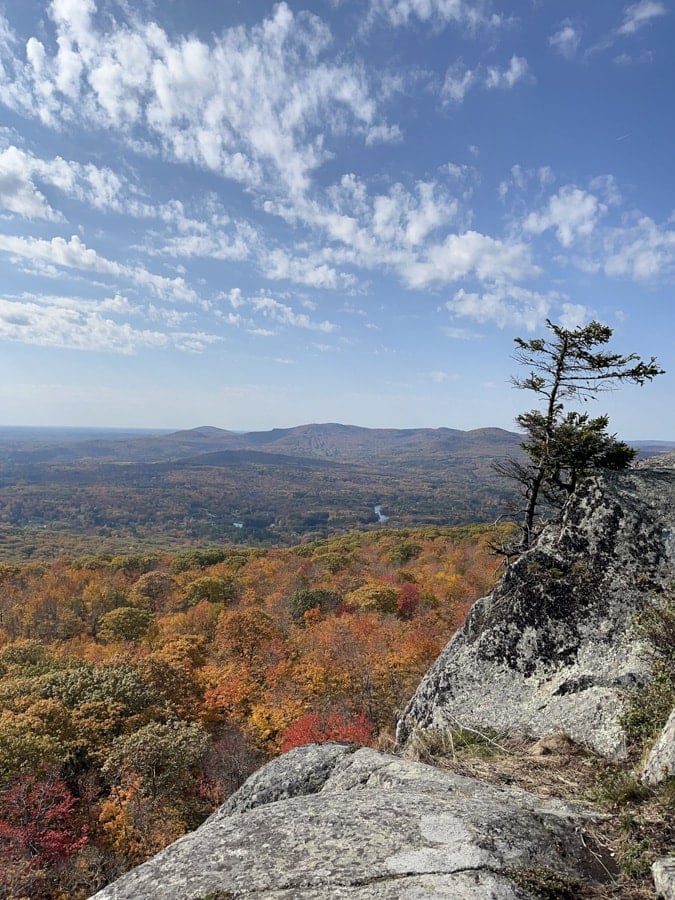 Lu and Connor had their dog, Addy, with them – isn’t she cute? She’s the sweetest dog, I love her so much. She’s a good little hiker, too! 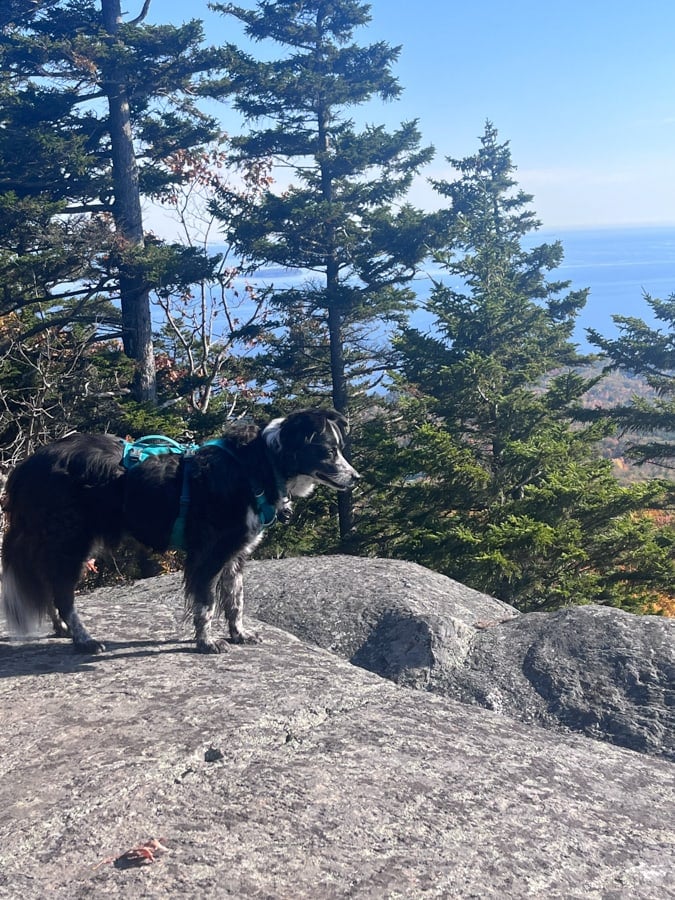 You can see her below in a stream, like, “you coming, slow pokes?” 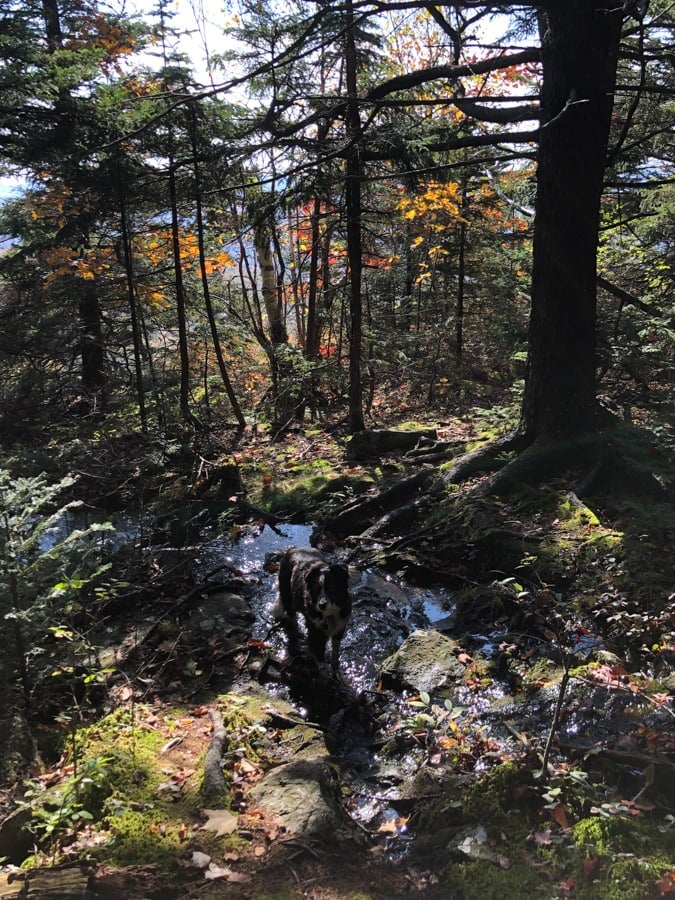 We ended up hiking over to the Mt. Megunticook Summit and then making our way back down. 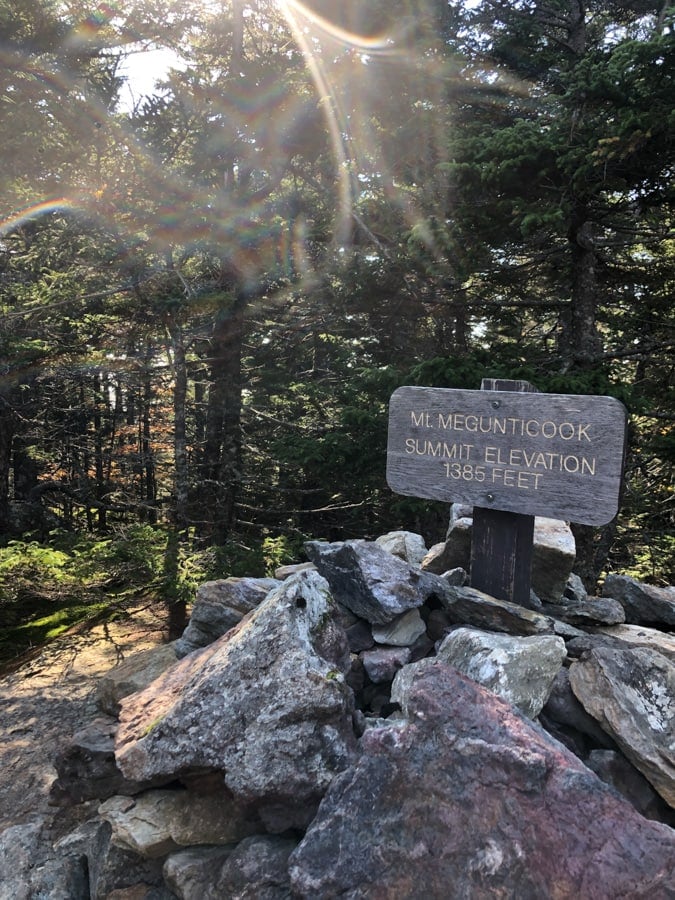 Before leaving the park, we grabbed the car and drove up to the top of Mount Battie (where there is a parking area) to check out the view from up there.

Also gorgeous, but similar to the views from our hike! And a little crowded, though not too bad. 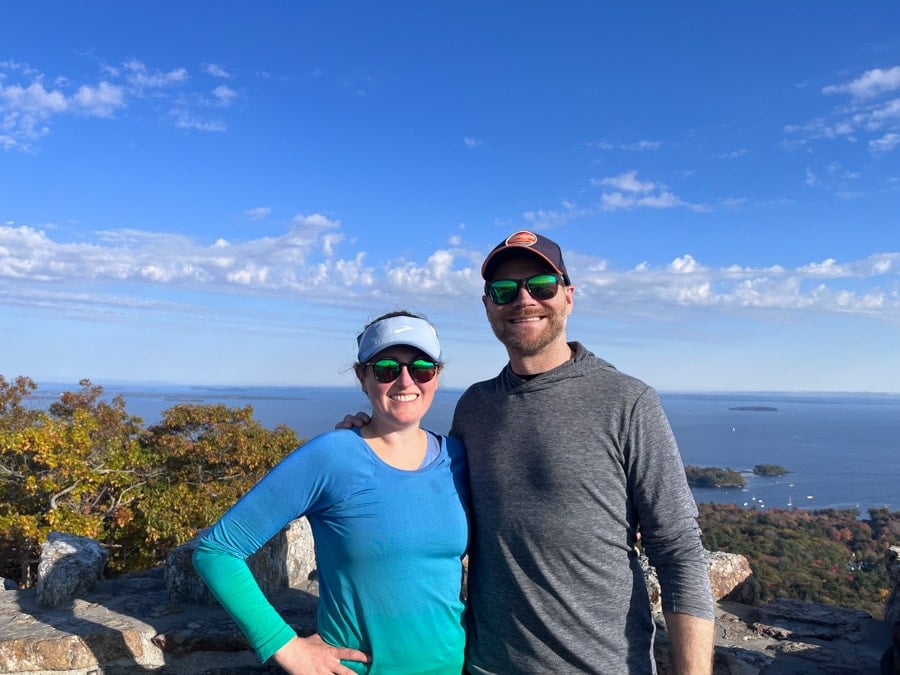 Take me back to this weather and these views! 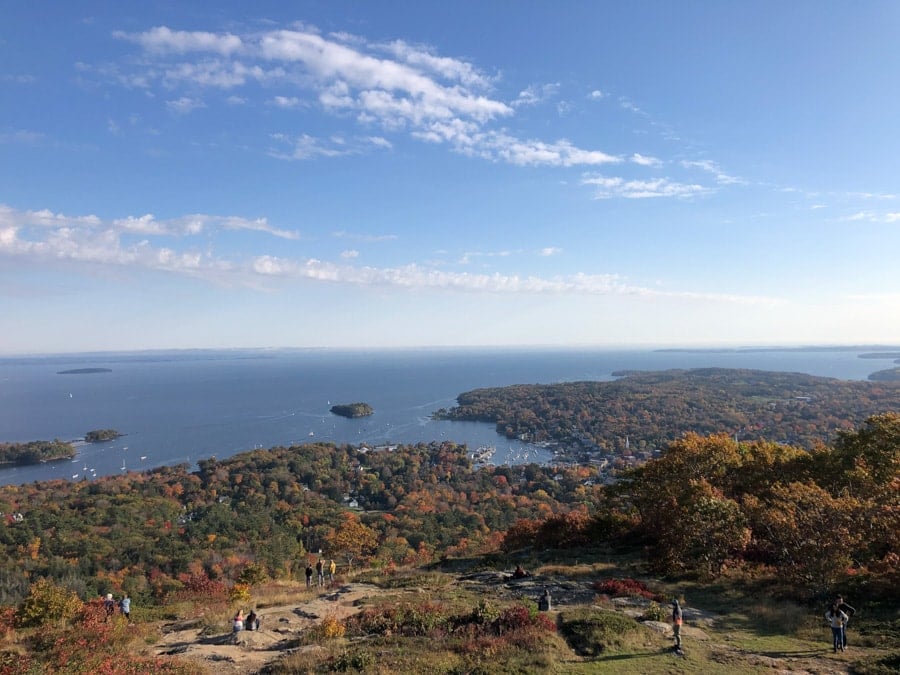 After our hike, we had an extra special treat: a sunset sailboat ride! We decided on a whim earlier in the day to book a sailboat (with someone to sail it for us) and boy am I glad we did. It was SO fun!

Addy the dog even came along for the ride. 🙂 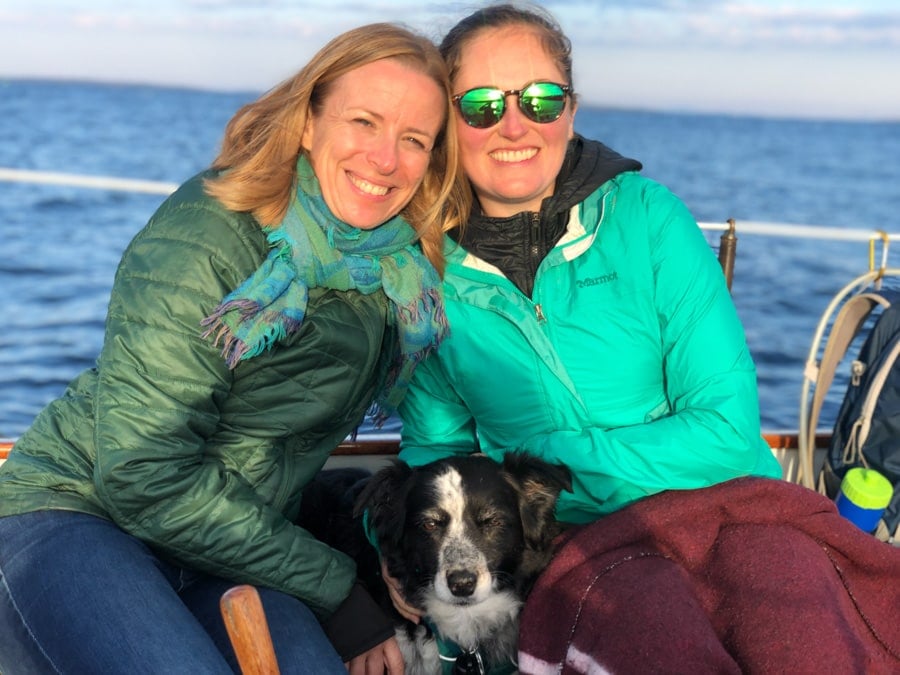 There were a bunch of boat options, but most of the other boats were either booked up or accommodated a large group; the one we ended up with (via Sail Camden) was a small boat and so it was just the 4 of us plus our sailor. Perfect!

Here was our boat: 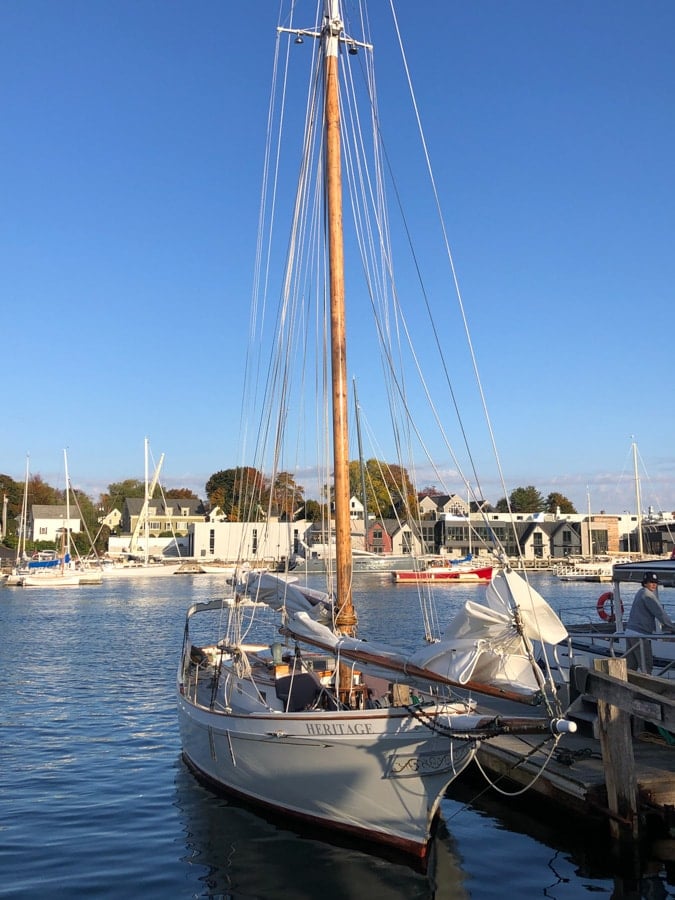 And we’re off! Farewell for now, Camden! 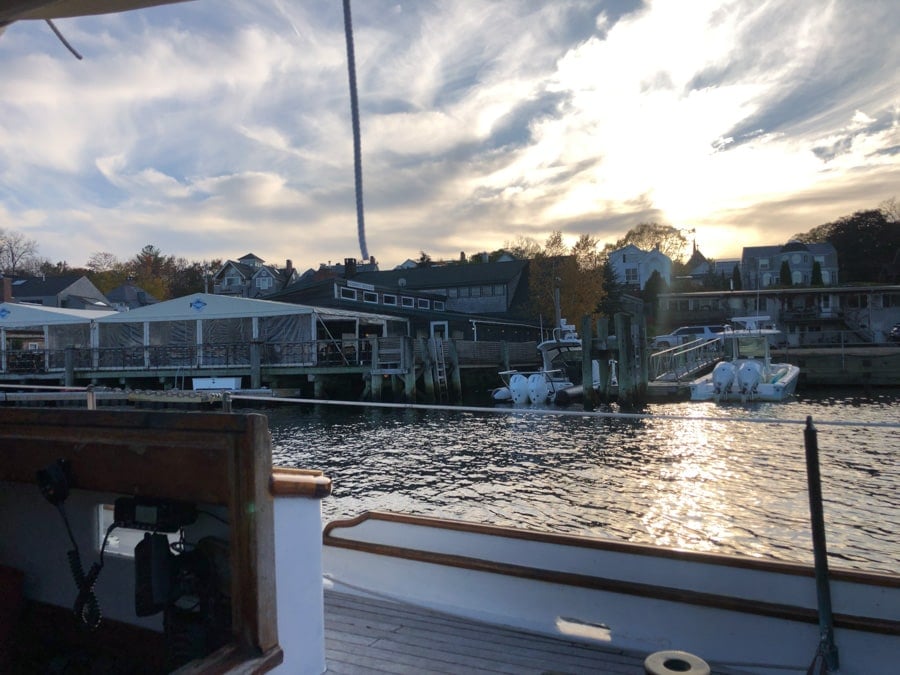 We were told we were allowed to bring along some food and drinks for the adventure, so we brought a baguette, some cheese, and some prosciutto (for me and Matt – Lu and Connor are vegetarians), plus a couple bottles of rose wine to share.

We had such a blast hanging out and chatting and taking in the views. It did get chilly out there as the sun went down and with the breeze, but thankfully Connor wasn’t cold and lent me his coat, and they had blankets on the boat for us to use, too! 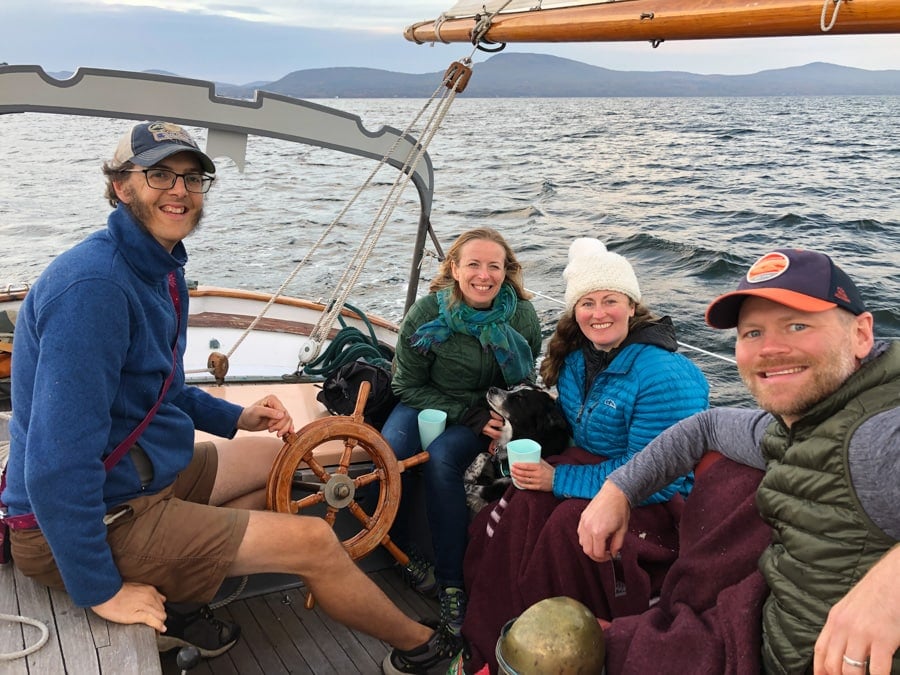 We were out on the boat for a couple hours and it was such a lovely way to cap off our time together. 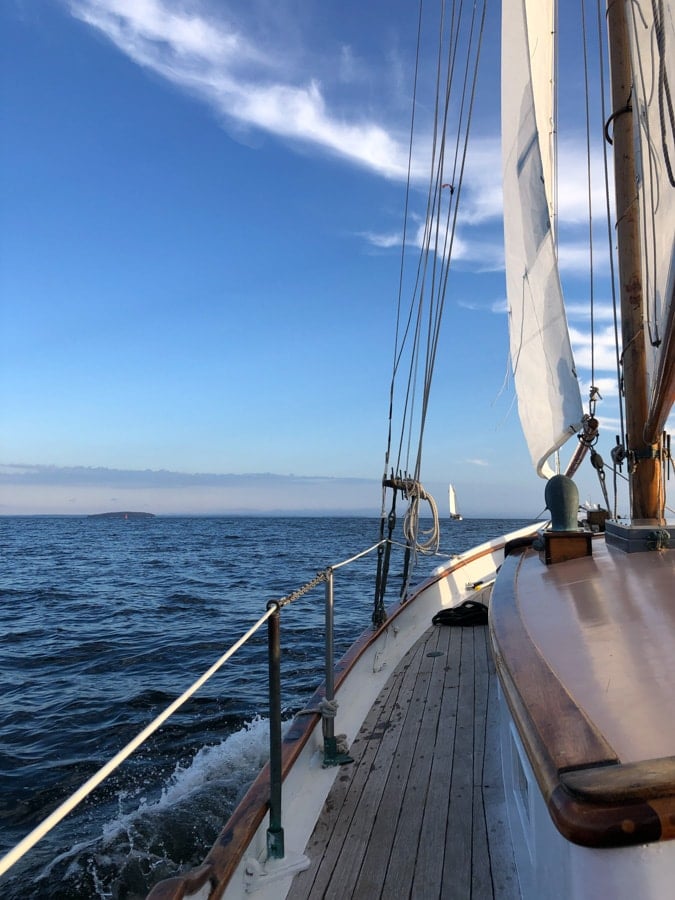 As the sun started to set it got even more gorgeous! Lighthouse + sailboat view = hard to beat, right? 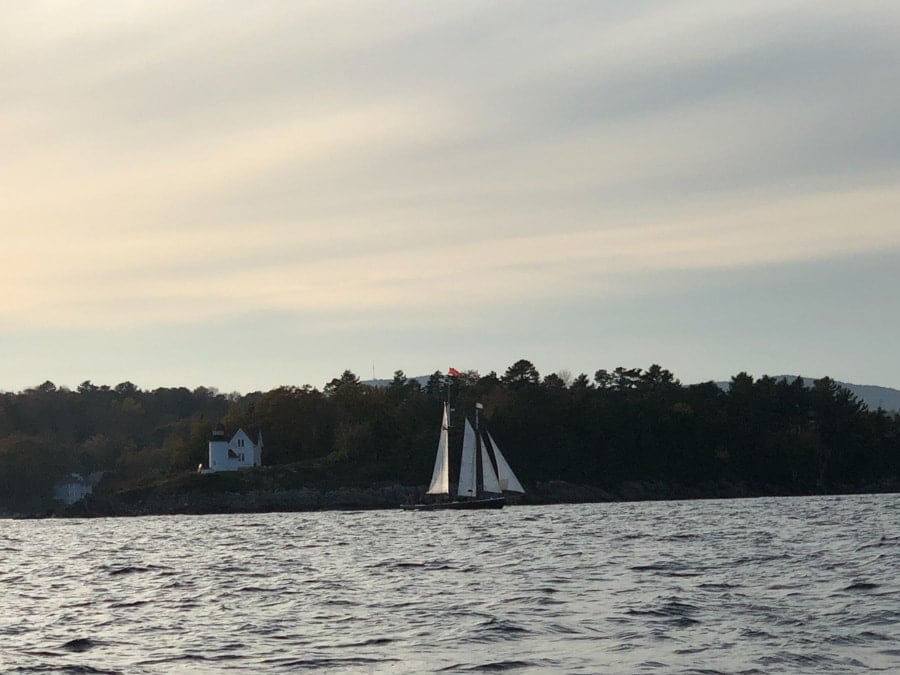 I took a lot of sunset pictures, so here they are for your viewing pleasure. 🙂 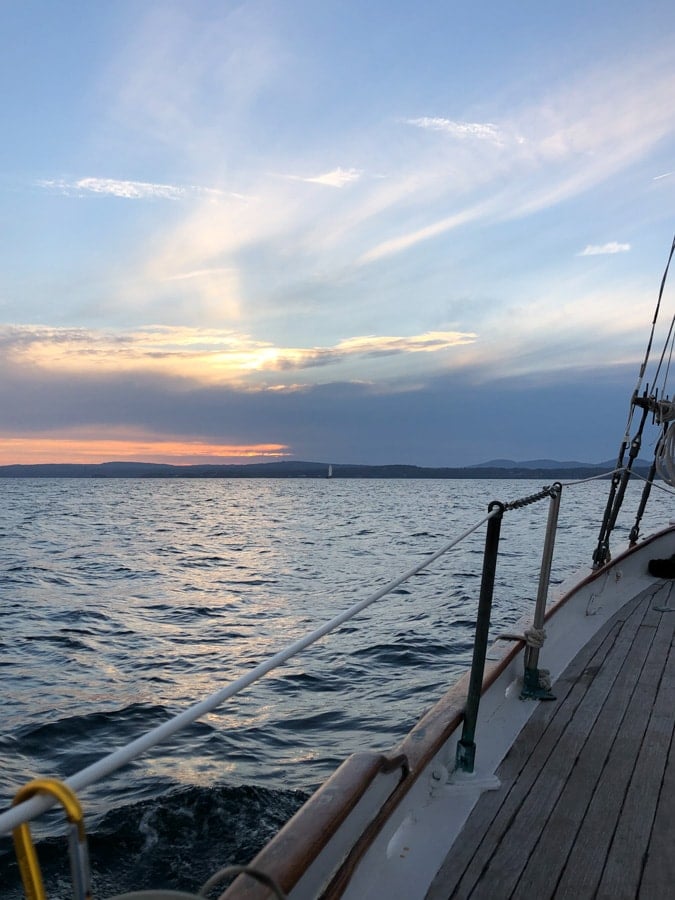 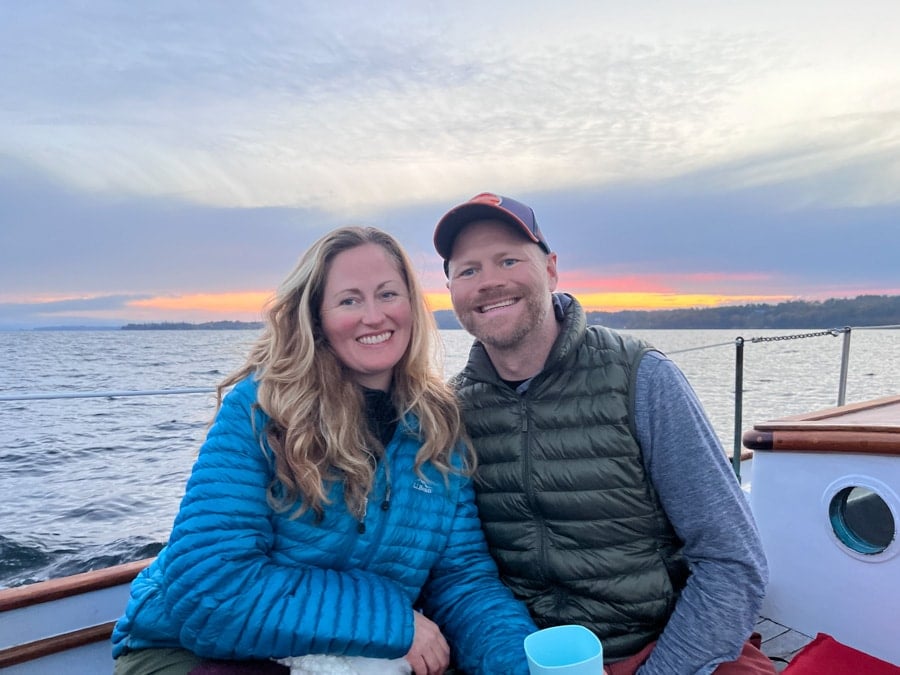 This one with the lighthouse is my favorite! I love how the sky was almost purple. 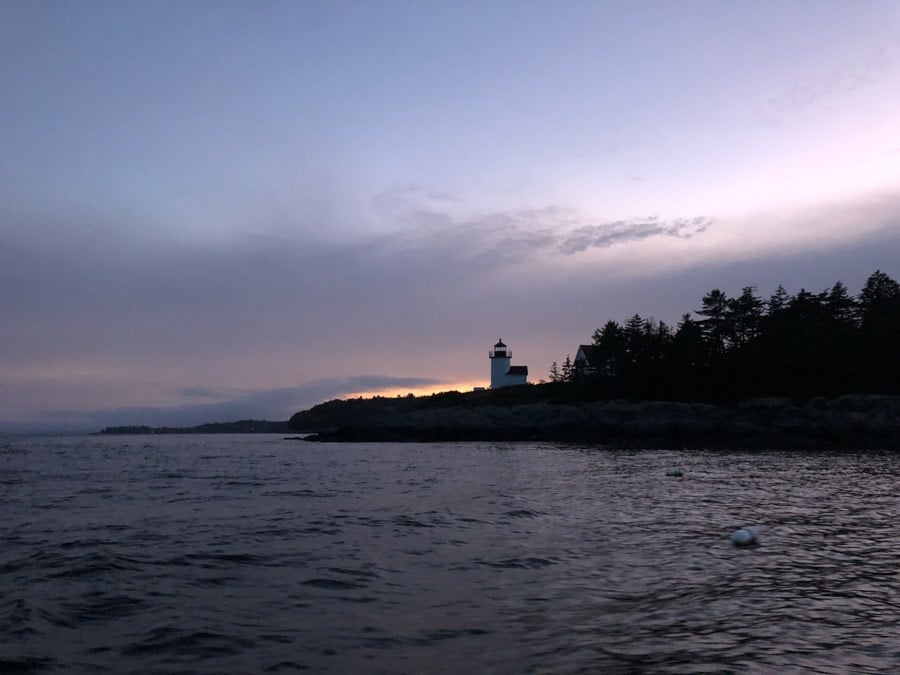 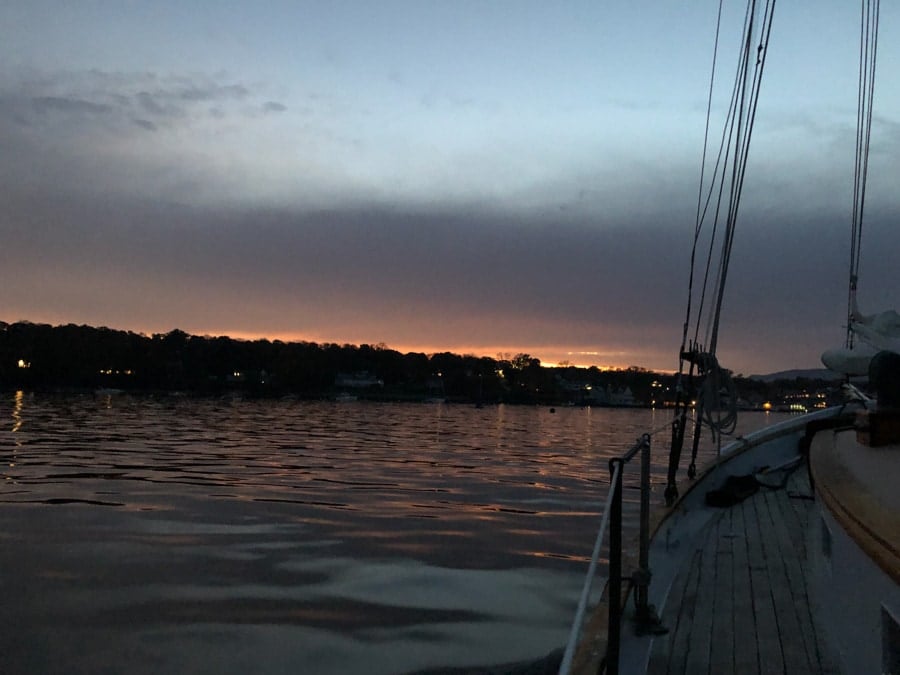 The sun was was just about fully down by the time we started pulling back in to the Camden harbor. 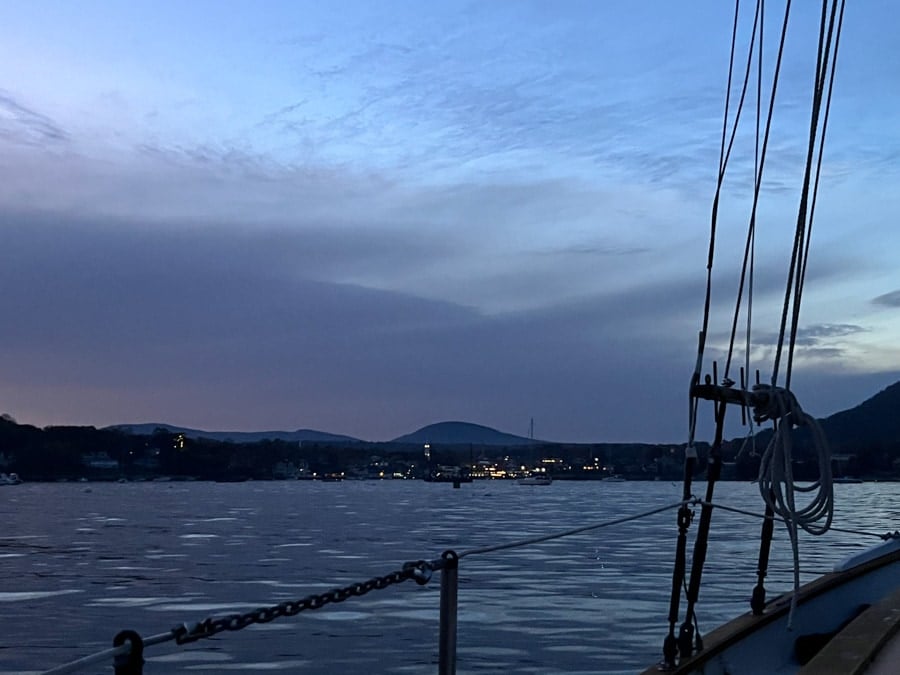 This came out a little blurry, but still pretty! 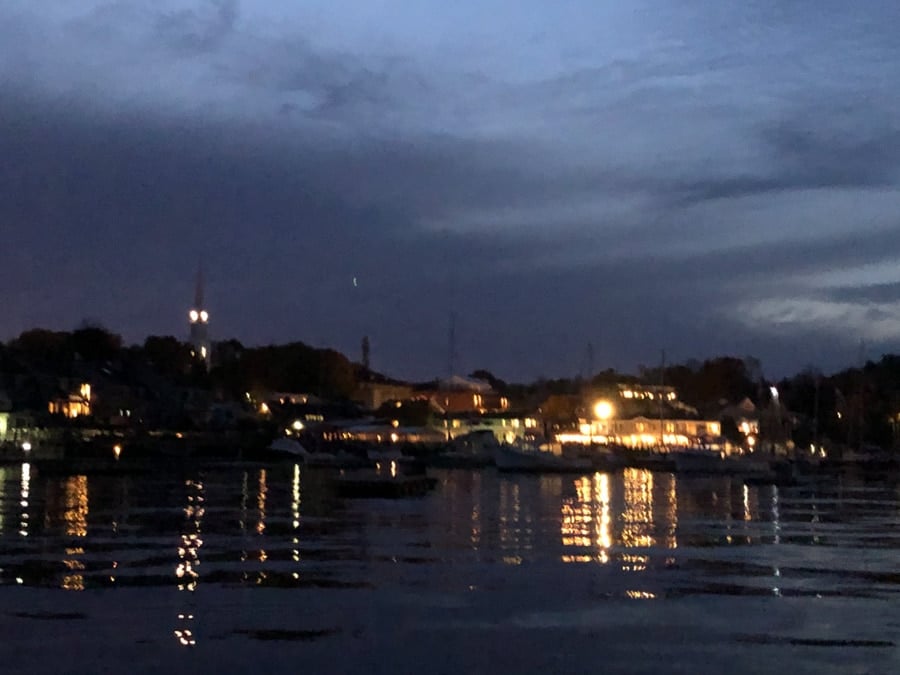 After hopping off the boat, our final outing together was dinner at Blaze Brewing which was right in the harbor area.

When in Maine… eat lobster rolls! 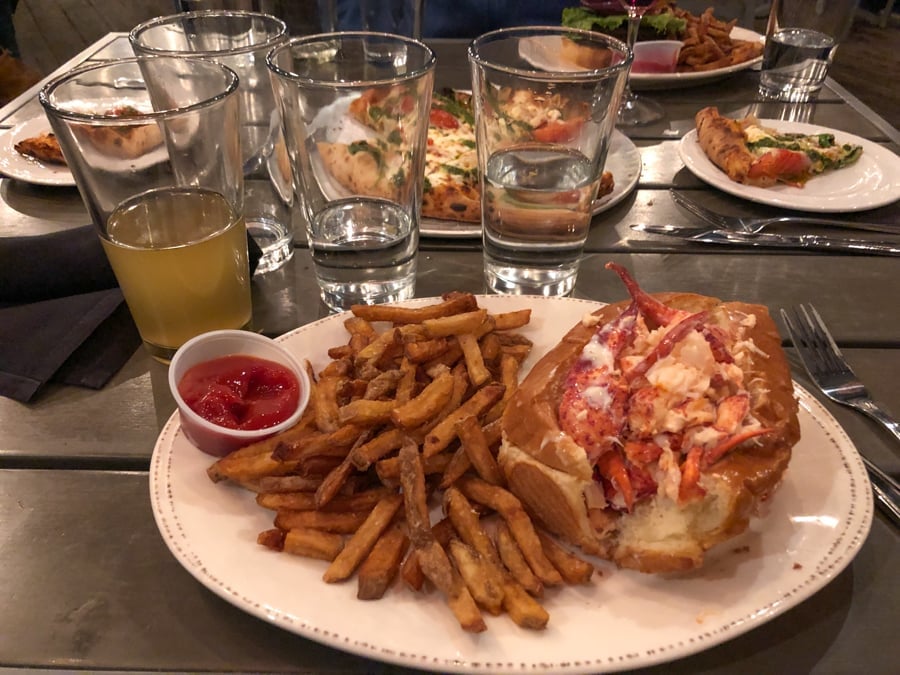 Miss you already, Lu and Connor! Thank you for such a fun day. 🙂 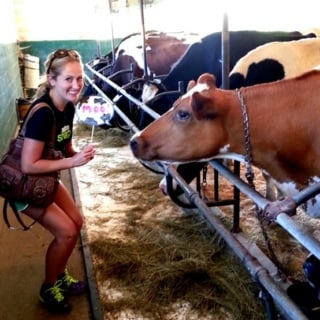 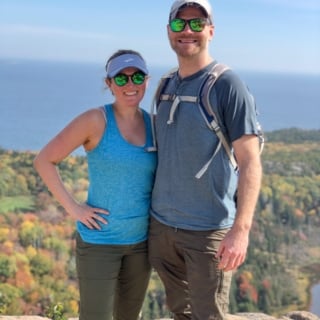 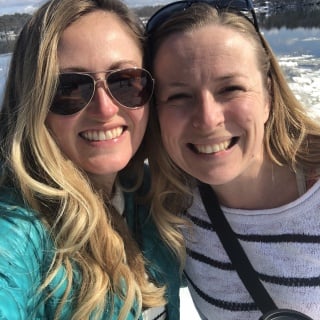 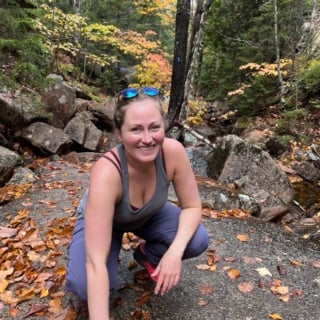