For Everyone Who Says They Can’t.

Hello, friends! It’s time for a little inspiration on this rainy Wednesday.

As part of my Brooks Run Happy Ambassadorship this year, I was given the opportunity to interview one of their Brooks I.D. members. “I.D.", in this case, stands for “Inspire Daily.” The group is made up of over 2,000 members who are active in their running communities and share a passion for the Brooks brand. They are runners, coaches, mentors, and leaders. Some of them are the leading runners in their towns, and some of them might be holding down the back of the pack. But all of them have one big thing in common – they work hard to achieve personal running goals, pushing their own limits and encouraging others to do the same along the way. I’m honored to say that I was actually a Brooks I.D. member myself back in 2009 and 2010!

For this interview, I chose a Brooks I.D. member named Jeff Le. 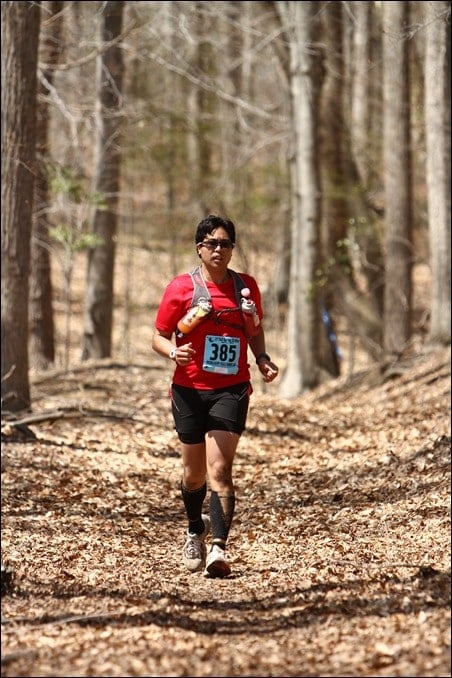 Jeff was most certainly not always a runner. Just a few years ago, he was 290 pounds and could barely run a block; his transition to running was so inspiring that I knew you guys would love to hear more, too. He’s since lost 160 pounds, is now an avid runner and seasoned ultra marathoner, and he even had a Runner’s World article written about him.

I asked Jeff to do a little Q&A for you guys and I hope you find his story as inspiring as I did! And if you think it’s too late for you – I hope this will convince you that it’s not. 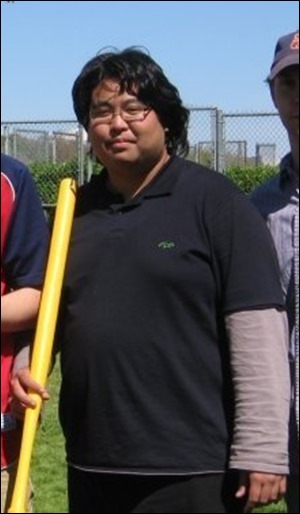 Tell me more about your weight loss journey. What inspired you to get fit?

I remember in March 2008 going into the doc’s office. I had told him that I had struggled to breathe going up stairs. I asked him what I could do for it. If there were pills or something I could take. I was 25 at the time and I felt like I would live forever. The doc looked me square in the face and told me that I would be lucky to live to be 40 at this rate. It shocked me. And another nail in the coffin that was my life that month.

In March, I had a terrible breakup, serious health concerns along with that relapse of malaria (contracted from my work trip in 2004 in West Africa), and my dad’s best friend died from cancer. He was more of a father figure for me than my own dad. Losing him was the toughest thing I’ve dealt with. He had inspired my international work and also reminded me to push outside my comfort zone if I was going to achieve anything. When he passed, I decided that I would turn my life around and raise money for cancer. And maybe do something I never thought I could do. Like run a marathon. 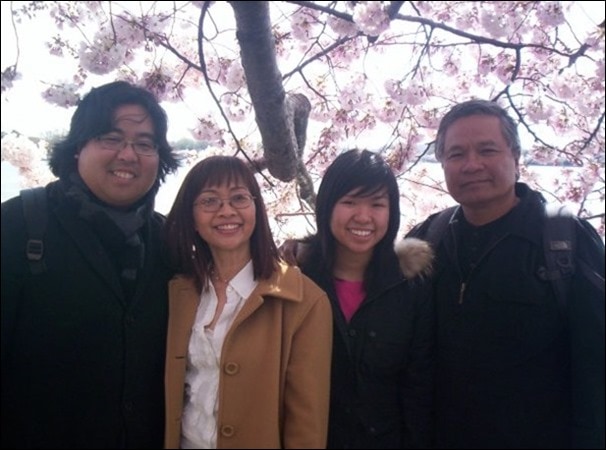 What was the hardest part of your weight loss journey? What made you stick with it and not give up?

The decision to commit myself to lose weight at 290 pounds in was something that terrified me. At my first day at the gym on April 1, 5 minutes into a treadmill run, I threw up on the girl next to me. April 2 is what I consider my anniversary with running. But also the day of my life reset. Going back to the gym at the same place at the same time with the same folks around was the toughest moment on the journey. All the marathons and later ultras were much easier than battling the anxiety on that treadmill.

But I survived day 2 without hurling on someone and continued. I stuck with it by holding myself accountable. I would hang up a pair of "aspirational" pants on the wall – a pair of jeans that were one size smaller than what I had current been wearing. I started with a size 46. And then slowly began knocking the weight off in bursts. With each size shift, friends would donate clothes to me over the next six months. I made it to a size 32 and 160 pounds in time for the October 2008 Marine Corps Marathon (MCM).

I thought about how I had to suffer to get to my goals and accomplish the things I had always wanted. I needed to pay my dues as I had wasted my health after all those years.

Finishing my first marathon in 3:42 in front of friends who had flown all across the country to see me run for the first time was an amazing feeling. To keep on track, I hid from friends for six months just to focus on my diet and health. So when they saw me on the course, they were in complete shock. And my mom’s face – lots of emotional disbelief. When I was coming towards the finish line, they announced my finish and talked about all the money we had raised for cancer. I had devoted miles for everyone who supported the cause and I don’t think I ever thought I would see complete strangers smile the way they did for me. 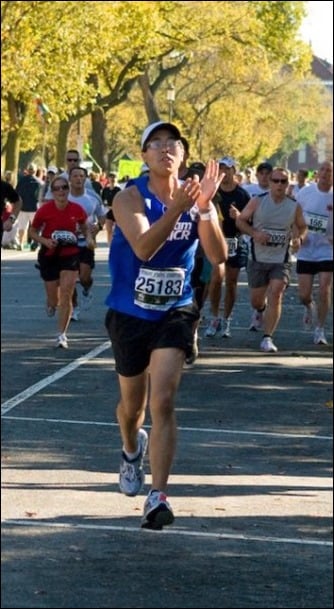 The other two big moments were qualifying for Boston in my home state of California after only running for 19 months, and having friends come to watch me finish my first 50 miler and 100k after being told I would never run the same after a massive knee injury.

Was there one specific moment where you knew everything you’d done to get healthy was completely worth it?

When my mom kept walking by me back and forth because she couldn’t recognize me. I called her phone and she said, I know you’re my son but you look nothing like him.

And probably when I handed my dad’s best friend’s son the amount of money raised in his honor at the post-race brunch.

What would you tell someone who thinks it’s too late for them to turn their lives around and get healthy?

I would simply talk about how it’s never too late. My mother tells me as motivation that life is like walking through a dark tunnel. You walk and walk until you are the light. It’s either the exit and the outdoors. Or another train.

You have to take that leap of faith. And we can’t give up. Others are counting on us.

What would you tell someone who thinks they can’t run?

I would tell them that it’s all mental. But you need to put in some time slowly. Start with what inspires you and think about that. For me, I write down a name for every mile for each run. It reminds me that we’re never alone. Running gets this weird loner reputation but it really is a community to embrace. Like life there are up and downs. But you can’t let it prevent you from starting. 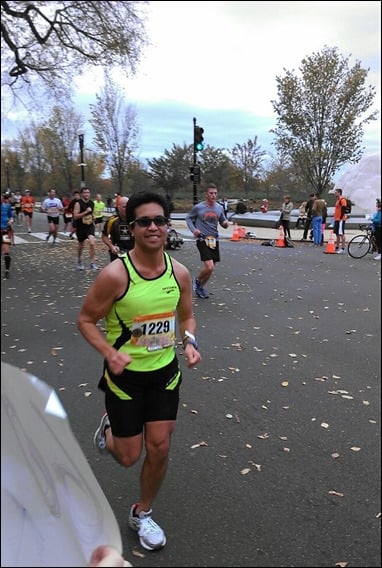 What inspires you to stay fit now and not return to where you once were?

To prevent a relapse, I have two things I look at every morning. First, a note with goals to run a sub 3 hour marathon and to finish a 100 miler. Second, a note from my dad’s best friend that says, "Don’t quit on your dreams or they win."

When I served in Afghanistan, I kept all the letters from strangers who supported my Boston training. I hung their notes all over my treadmill runs. It kept me going in hard times.

What are your biggest tips for brand new runners?

Feel your body. Don’t just hammer every time. Be patient. It’s a long view you’re after. Not a quick fix. Run out the negatives and take in the positives. It’s ok to have doubts but you need to focus on the daily achievements. That’s how we best the despair.

Join a running club – super supportive and a wealth of knowledge. Go with a friend! Strength in numbers. Sign up for races to keep you accountable and motivated. Keep your biggest fans in the loop. They’re your community. Have faith that you’re putting in the good work and it’ll get you to the finish. Training is way tougher than finishing a race. The race is a celebration of your hard work. Enjoy your special day! 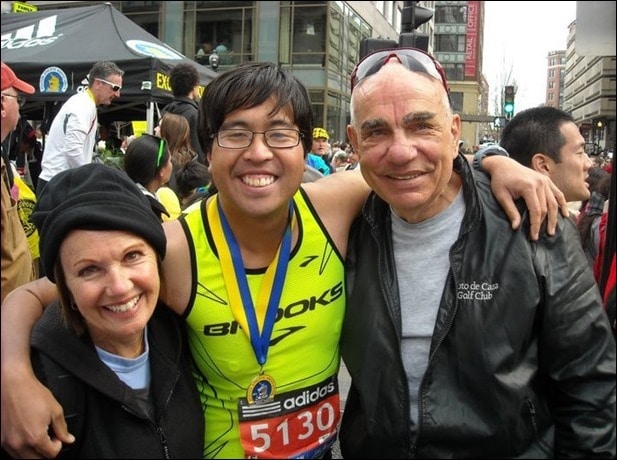 Thank you to Jeff for sharing his story! Conducting this interview got me really pumped to start training for my first full marathon – my plan actually starts this week! More on that to come soon, I promise. 🙂

If you’re a runner, how did you get started? And if you want to become one… tell me how you’ll start! Here’s a post all about how I started running, written on the eve of my second half marathon.

Have a great day, everyone, and enjoy the 4th of July holiday tomorrow! I’ll be taking the day off to enjoy the festivities as I’m sure most of you will be taking a break from your computers, too. Have fun and I’ll see you on Friday with a holiday recap! 🙂

p.s. I just drew the winner of my Reebok giveaway — I’ll contact them directly and pass their info on to Reebok for their gift card. Thank you so much to everyone who entered! 🙂 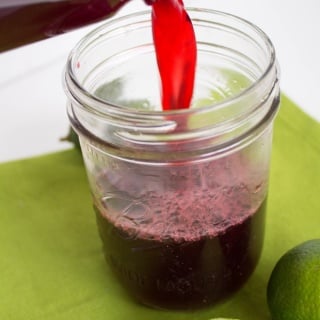 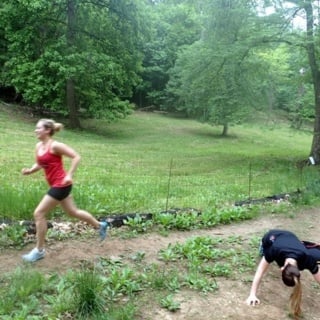 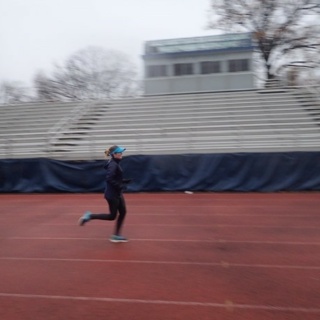 Back in DC: Soggy Track Workout