Hey friends! Matt and I are back in DC after a fun weekend on Long Island! 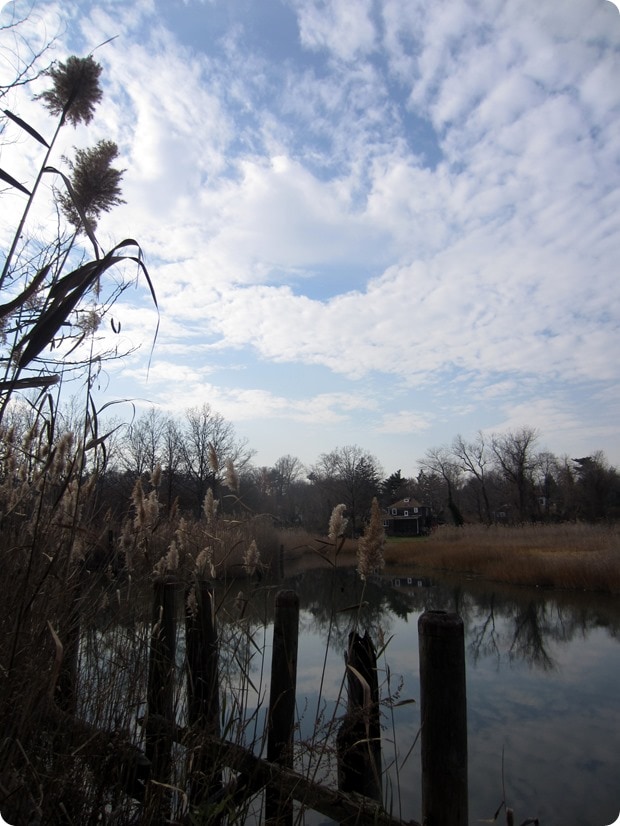 We were in Great Neck, New York for the wedding of one of Matt’s good friends from Pittsburgh; they were roommates in DC with some others after college, too, so our whole DC crew was in attendance, which was awesome.

The festivities began on Friday! Matt and I took the train out from NYC and met up with the rest of the group. Some of our crew was going to the rehearsal dinner, so we all met up first for a drink, then a smaller group of us split off to go get dinner on our own. Here I am with my college friends Sarah and Megan, who are both married to Matt’s good friends. 🙂 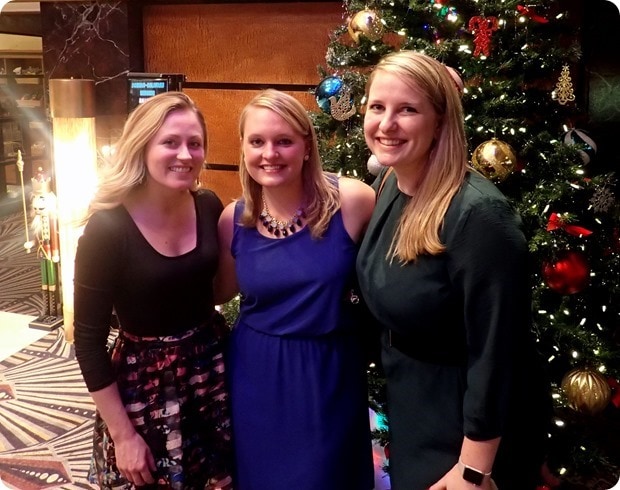 We (with the addition of our gentlemen) all went to dinner at an Italian place nearby called Il Bacco. 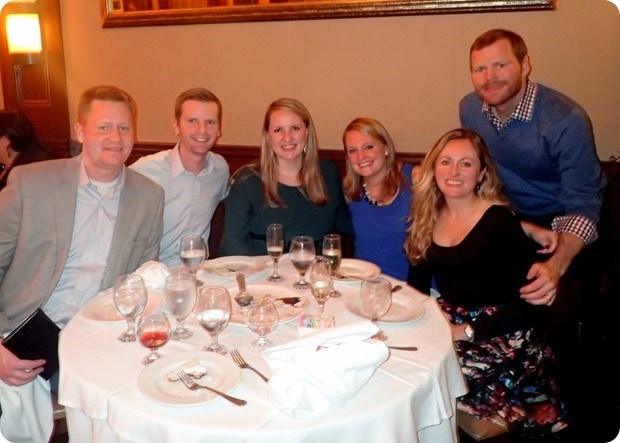 It was such a blast – good food, good wine, good friends! They brought out some really good cheese, bread, and olives for us to snack on at first, and then I had a chicken dish with artichokes and mushrooms as my main course. Bad photo but it was delish! 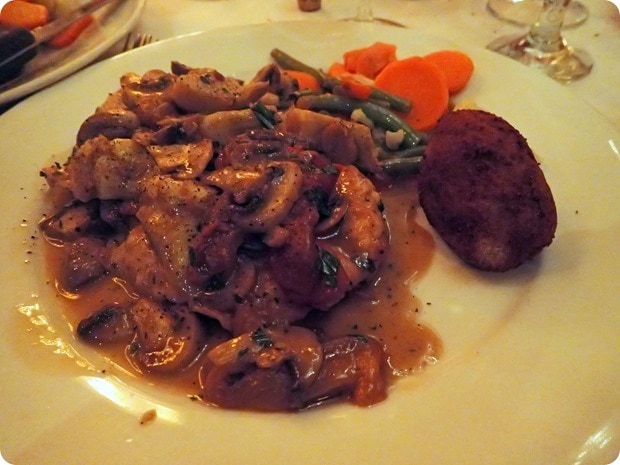 For dessert, we all shared the most amazing thing I’ve ever eaten: nutella pizza. Yes – it was as good as it sounds. The nutella was stuffed inside, and that’s cannoli cream on top, which was to die for. Omg. 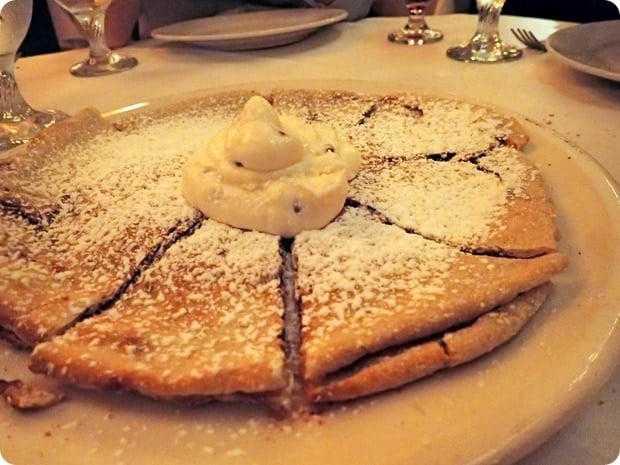 After dinner, we headed to a nearby bar to continue the party, where I discovered this really fun new to me thing: Kom-brew-cha! Basically kombucha (which I love) with a higher alcohol content (2%). It tasted good, but it was INSANELY fizzy. Too fizzy. Not sure if it was just the one I got or if it’s all like that? Either way, fun to try it. 🙂 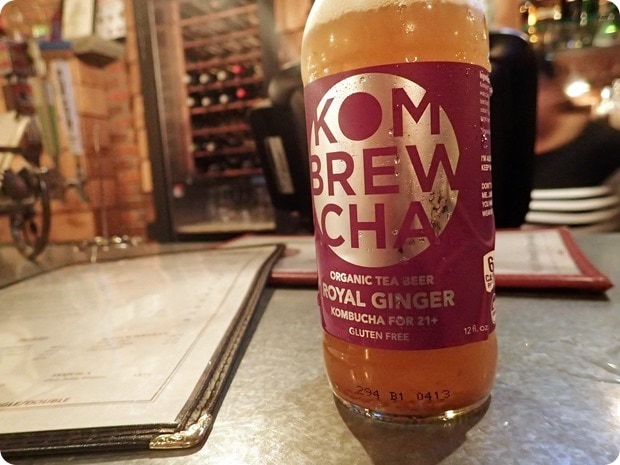 On Saturday morning, Matt and I slept in, then met up with our friend Tom for a run around Great Neck! 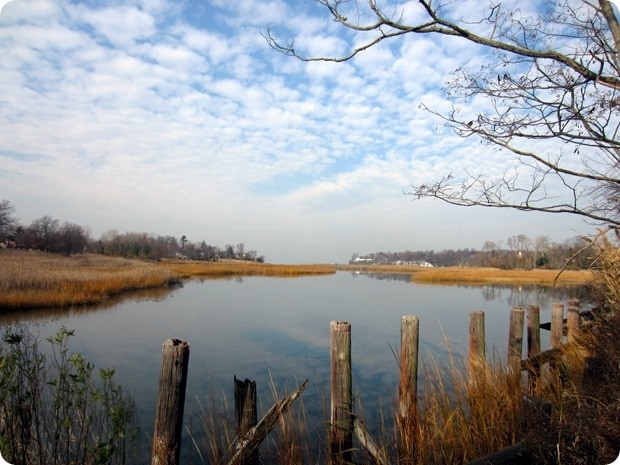 We ran through some neighborhoods and also found this cool tiny trail with nice views of the water. 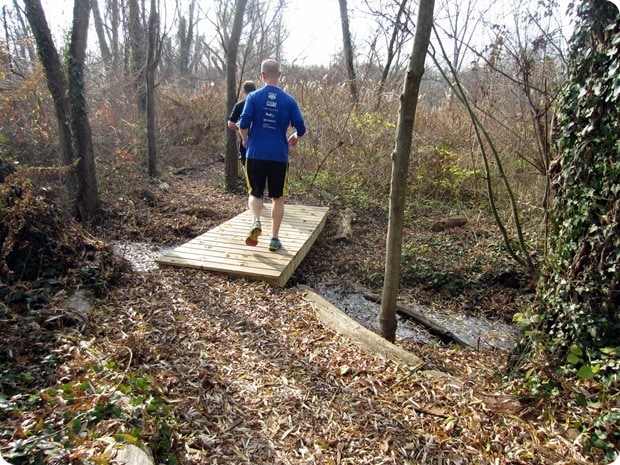 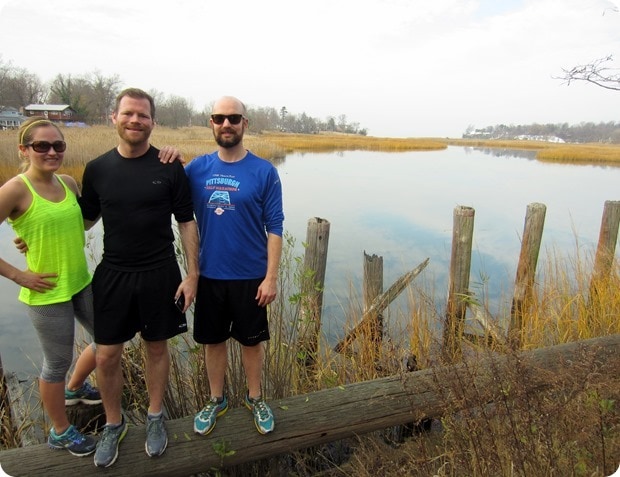 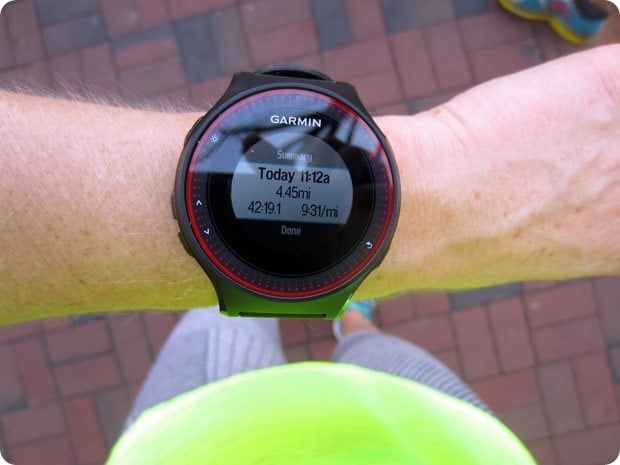 After our run, we saw someone outside our hotel holding a green juice; he told us it was from a place called Bee Organic, right around the corner, so we strolled over there for a little post-run juice action.

We all got the “super defender” – kale, carrot, orange, ginger. Great combo! 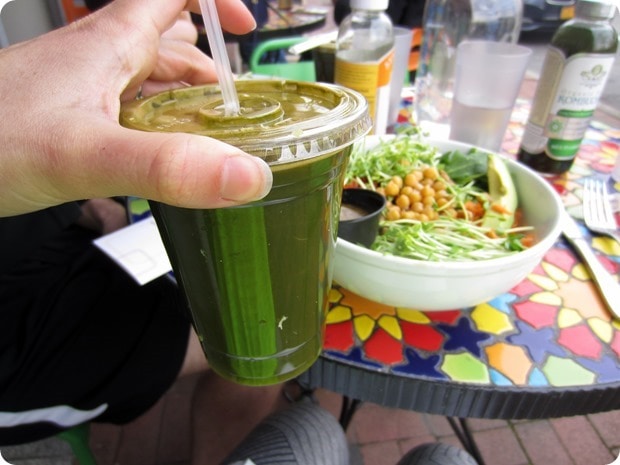 Tom had to rush off to get ready for lunch with the other groomsmen, and Matt and I decided to stay at Bee Organic to eat. A refreshing salad sounded good to me – I got the “buddha bowl” which was arugula, cabbage, carrots, tomato, sprouts, chickpeas, cucumber, avocado, and walnuts. Topped with a balsamic vinaigrette! And I stole some of Matt’s goat cheese from his salad. 🙂 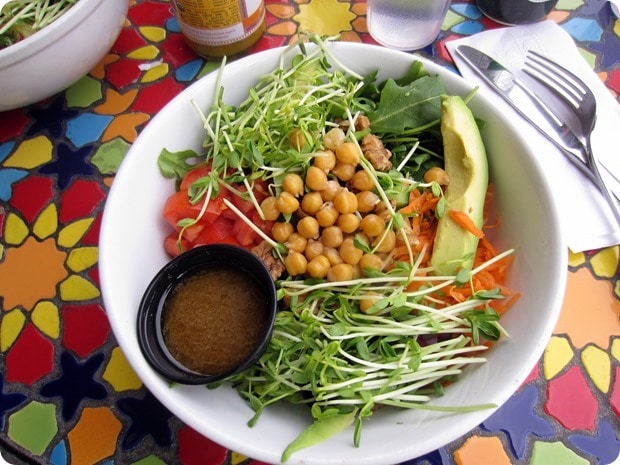 And because I need carbs to be satisfied by a meal, I got us a side of bread, too. 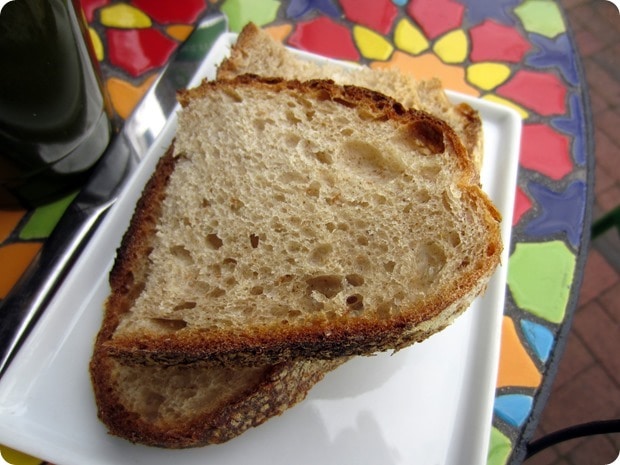 The rest of the afternoon was spent resting up and primping! The wedding was black tie, so a few of the other ladies and I decided to get our hair done beforehand at a nearby blow dry bar. I love having my hair dried for me – such a treat! The other girls all went curly, but since I usually wear my hair curly/wavy, I went straight with a little curl at the very end.

All dolled up! I got a new dress for the occasion. 🙂 It’s this one from Macy’s. 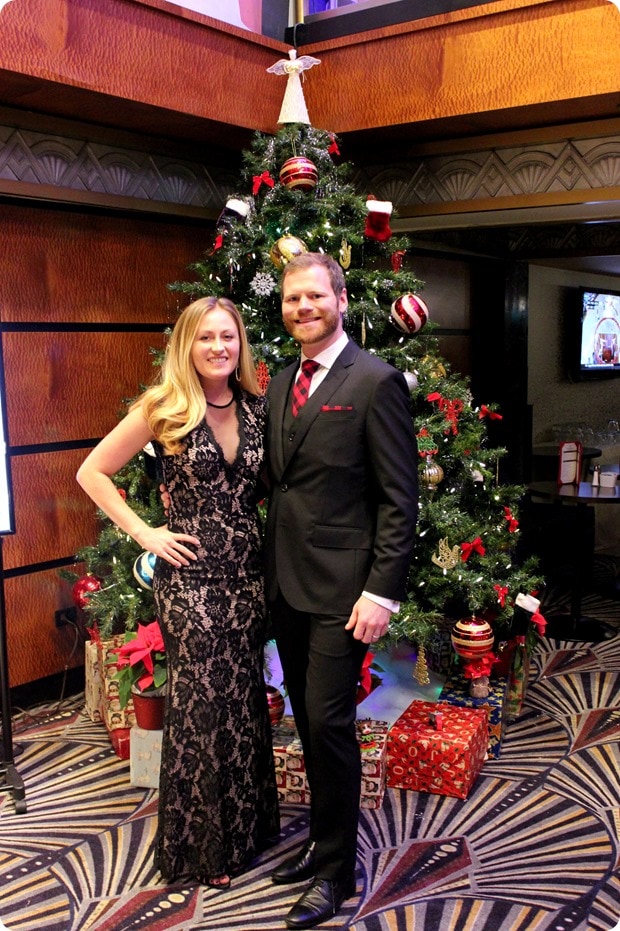 I liked the back of the dress – fun keyhole shape! 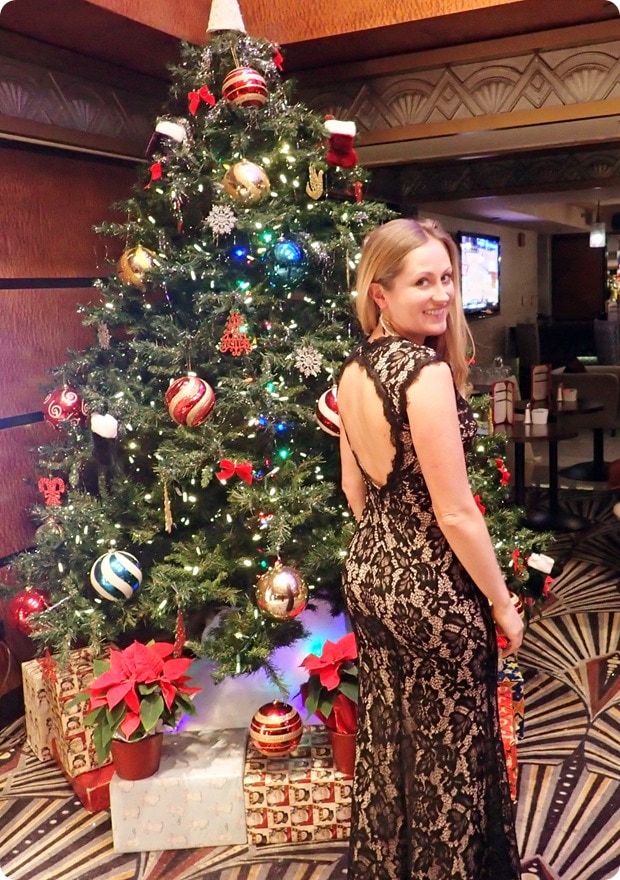 With the whole gang (minus those in the wedding party): 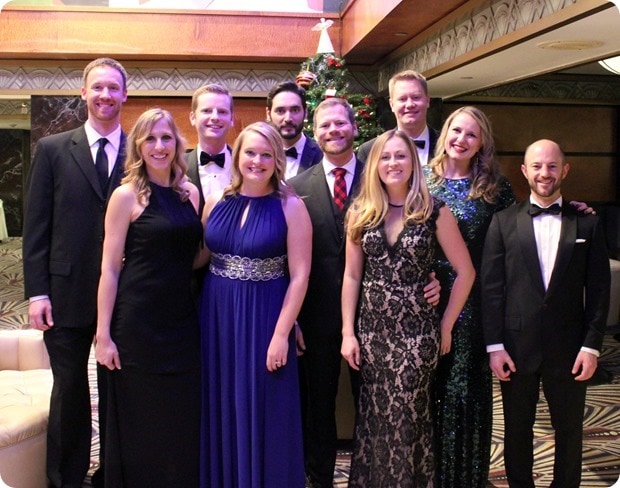 As for the wedding, it was wonderful! I took almost no photos because I was too busy dancing up a storm – their wedding band was probably the best I’ve EVER experienced – huge and SO good! What a blast. 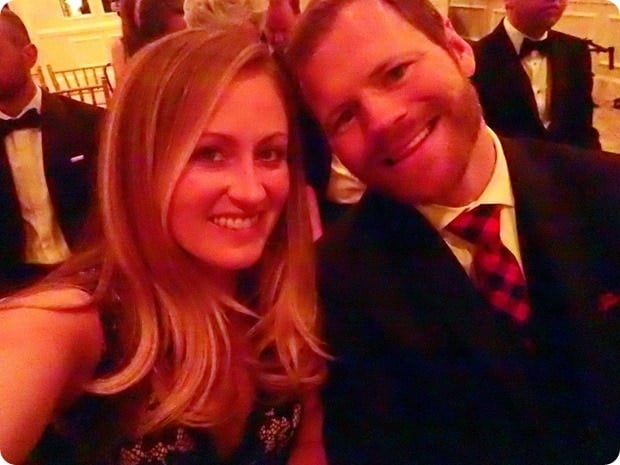 The decorations were stunning, too – aren’t these centerpieces beautiful? 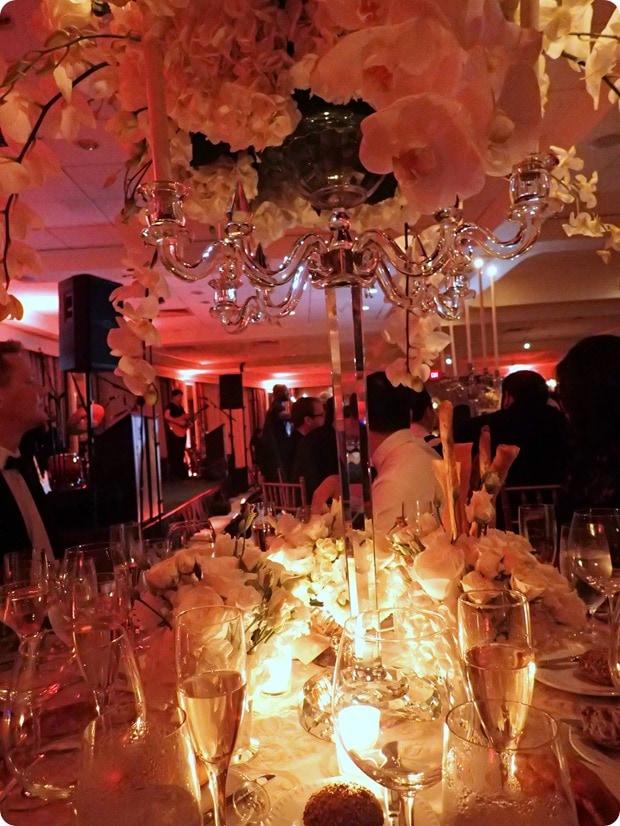 A big congratulations to Lee and Allie! 🙂

After dancing the night away, Matt and I slept in again on Sunday before heading to the farewell brunch. We didn’t have a train back to DC until later on in the day, so we spent the afternoon wandering around Great Neck. It was REALLY nice out – so warm! We decided some more greens were in order and headed back to Bee Organic for salads, which we ate in a nearby park. I had the same thing as the day before but with the addition of feta! 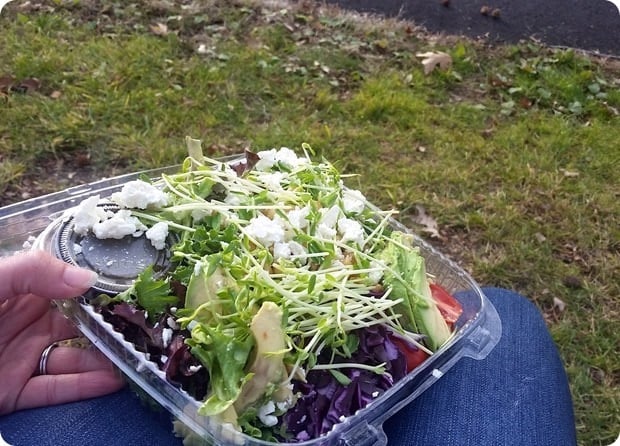 Matt also got some pizza a little while later – because, when in New York, you eat pizza! I stole a slice. 🙂 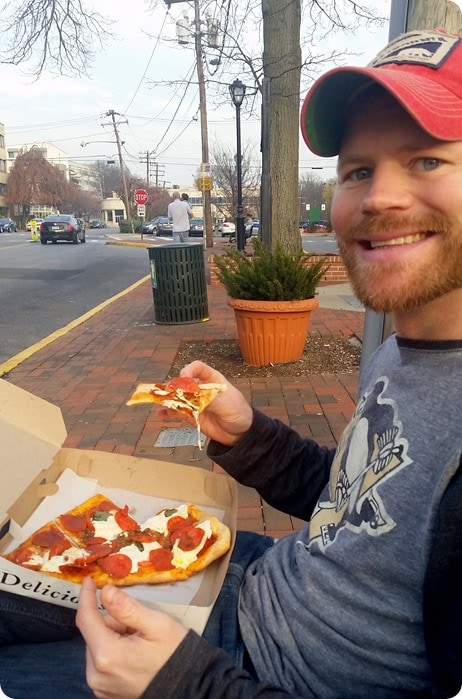 The rest of the day was spent on the train! Penn Station is always a kind of stressful hot mess, but once you’re on the train it’s so much better than driving or flying. I wrote this blog post on the train, in fact – nice to go into the workweek feeling caught up already (I tackled my inbox while on the train, too)! Since we weren’t getting into Union Station in DC until about 8:30, I was smart and ordered dinner to go at Bee Organic before leaving Great Neck – I didn’t get a picture because I was sitting next to a random person on the train (it was PACKED so Matt and I had to sit separately), but it was a really good veggie chili atop brown rice with avocado. Yum, yum! Way better than train station food. 🙂

So there you have it! Such a fun weekend – and a fun couple days in NYC last week, too! It’s nice be home, though, as always. 🙂 Have a great day, my friends! 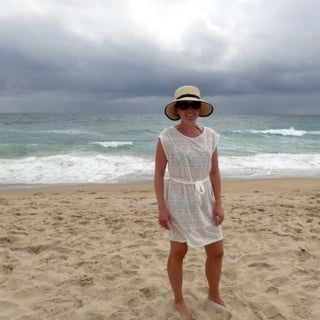 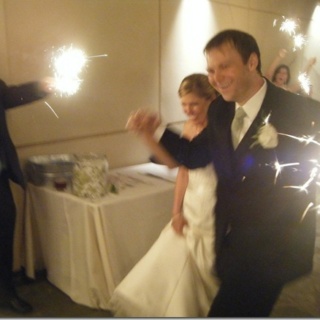 I now pronounce you… 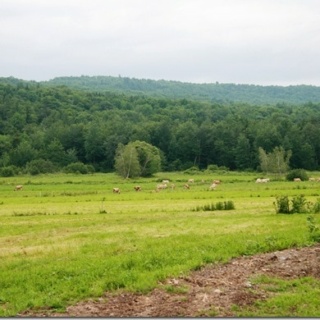 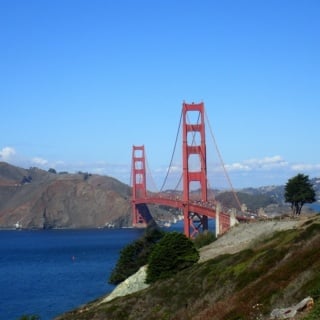