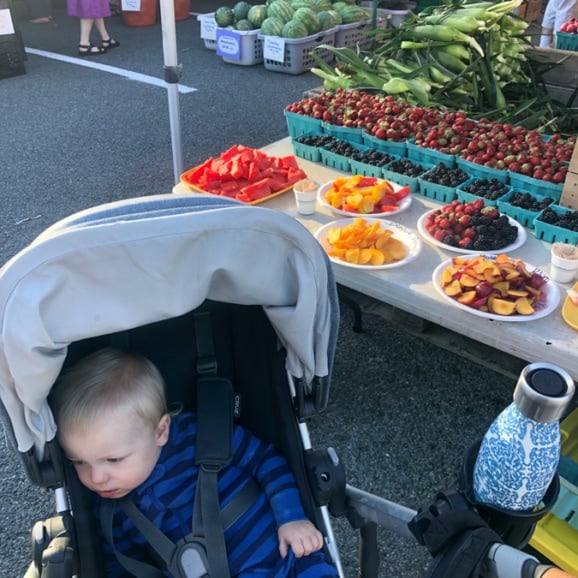 Hello there! This past weekend, Wes and I were home solo. Here’s a recap!

Matt had a concert (Dispatch and OAR – ah, college memories!) he wanted to go to with a bunch of friends up in Pittsburgh area (where his parents live) last night, and Matt’s older brother and his two older boys (Riese’s cousins) were going to be up there, too, so it made sense for the two of them to go and enjoy a long weekend!

They left Friday afternoon and they will be back later this evening (Tuesday).

I was sad to miss out on the socializing, but I’ve been traveling so much lately and long road trips with Wes are not super fun, so I decided we would stay home. It felt like the right call!

Wes is 14+ months now and he is a BUSY guy who rarely stops moving.

He’s happiest outside, adventuring and climbing things, so I was super happy when we ended up having some really gorgeous weather this past weekend – finally, the crazy heat broke! 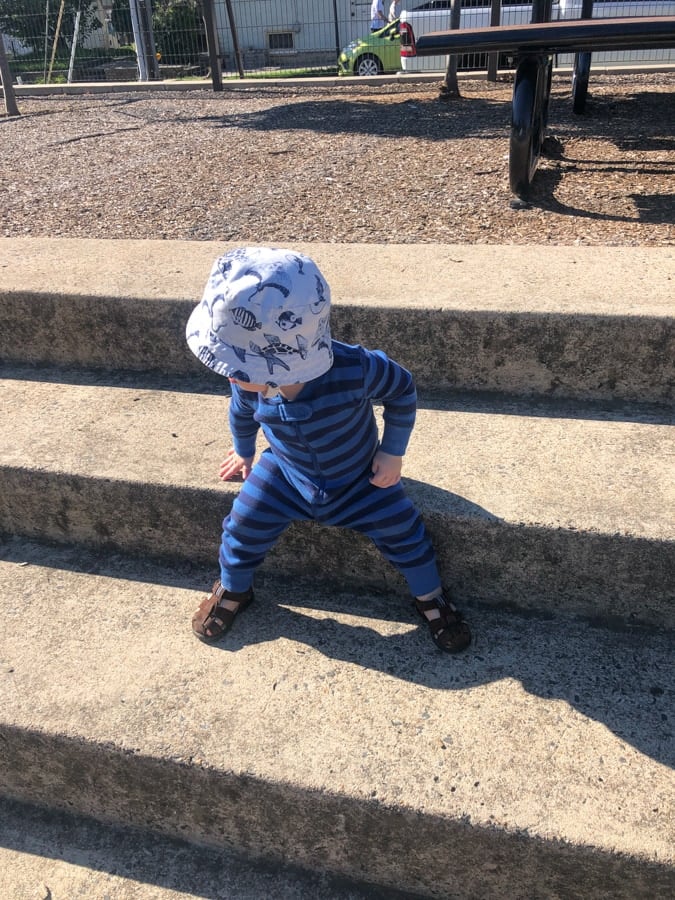 Since he started walking at 9.5 months, he’s super steady on his feet now and can pretty much run already. He’s trying to figure out jumping but hasn’t quite gotten there yet!

He LOVES stairs – he wants to climb up and down them for ages practicing. He never wants a helping hand, he always wants to do it all himself. My big little man!

The big update is that we just switched Wes to one nap (instead of two) a couple weeks ago. It felt like it was time – he was starting to do one really long nap and then not really wanting to go down for the second, and the second one was also getting quite late so then his bedtime would be late, too.

I’m THRILLED to be on a one nap schedule. It just gives us so much more flexibility to be able to get out and do things, and I love that his schedule is predictable and consistent now, too.

We are still figuring out the right amount of daytime sleep and time for him to be awake before bedtime, but we are getting there. We are doing a noon nap now (we moved back by 30 minutes every few days to slowly get him there), regardless of what time he wakes up in the morning.

So far he’s been taking really epic naps – 3 hours usually – but I think it’s a little more than he needs because he’s been hard to get down at night and waking up super early in the morning (oof).

So, we are going to experiment with cutting his nap at 2.5 hours, and then giving him a longer wake window before bedtime – likely 5 hours. We’ll see! Any tips welcome. 🙂 I’d love for him to not be waking up at 5:30 anymore…

Anyway, on to the weekend recap!

I forgot to take photos Friday evening, but I think we went for a walk in the late afternoon/early evening, and then had leftovers for dinner – a variation of my Saucy, Quick Chicken recipe – Wes is a big fan.

I have been out of the habit of watching TV – usually I end up reading before bed and Matt will watch some TV – but I discovered one of my favorite mindless shows (“Never Have I Ever” on Netflix – so cute and entertaining) had a new season out, so I made myself some popcorn and pounded through a few episodes before bed!

I definitely notice I don’t sleep quite as well when I watch TV right before bed vs. read in bed for awhile to wind down… but the show was so fun I had a hard time turning it off!

Wes was up at 5:45 on Saturday and I was majorly regretting my later than usual evening of TV, but oh well. At least it was a beautiful morning!

We had a simple breakfast of some of my Microwave Banana Oatmeal, and then headed out bright and early to take a walk over to the coffee shop for a latte for me and a breakfast burrito for us to share a little later, then walked to the farmer’s market! 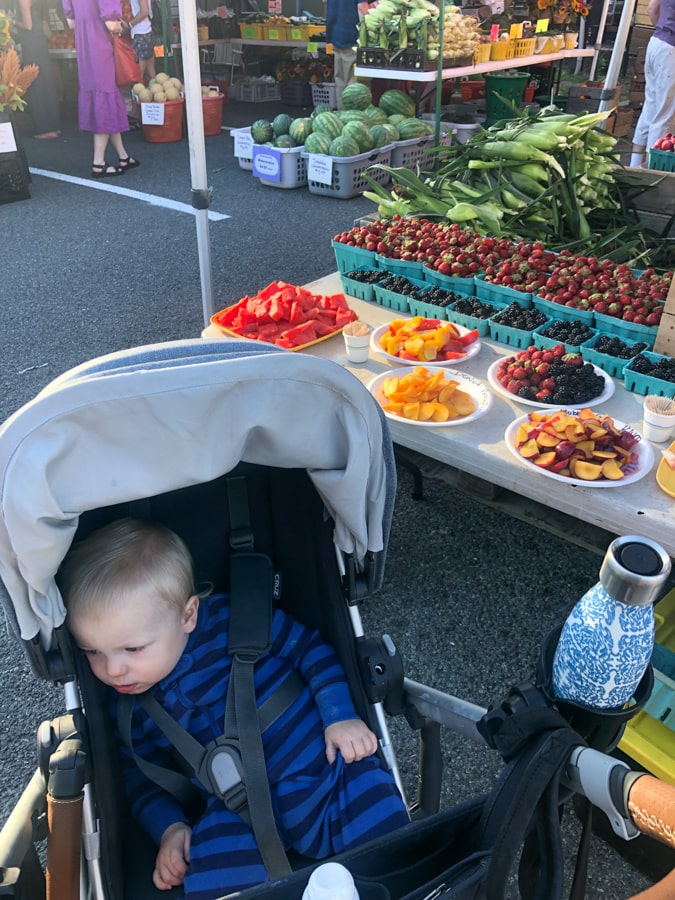 All the produce right now is gorgeous – especially the peaches! I bought a whole slew of them and they have been super delicious.

It was nice to actually make it to the farmer’s market for the first time in awhile – with him on the two nap schedule, he was usually going down for a nap around 9:30, so it didn’t leave a lot of morning time especially if Riese slept a little later (she’s usually up around 7 or 7:30ish these days).

After the farmer’s market, we headed to a nearby park to share our breakfast burrito – it has eggs, sausage, cheese, roasted red peppers, and spinach, and Wes and I both love it!

He’s quite picky about food at the moment but if he doesn’t eat enough he won’t sleep well, so if I find something he’ll actually eat a lot of I’m thrilled. 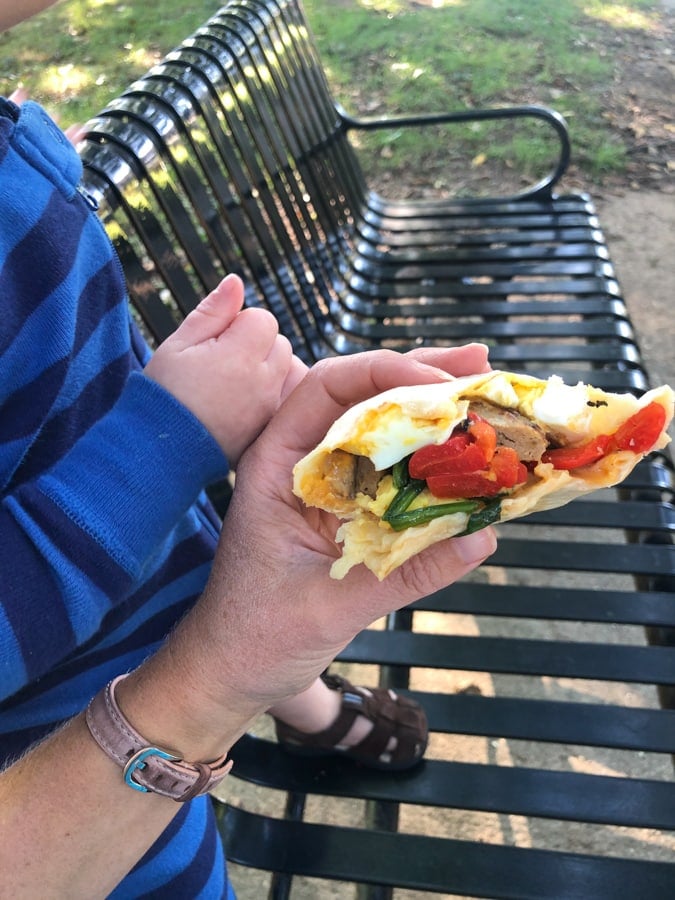 After the burrito we wandered around a bit, but he kept trying to walk up onto people’s porches or right into the road (and then having a tantrum when I tried to stop him), so I decided we needed some fences in our life – back into the stroller he went, and then we walked over to the playground instead!

We had fun there for about an hour, then headed home. It was only 10am but felt much later, ha.

We bumbled around a bit playing – Wes is really into tossing all our tea bags all over the place: 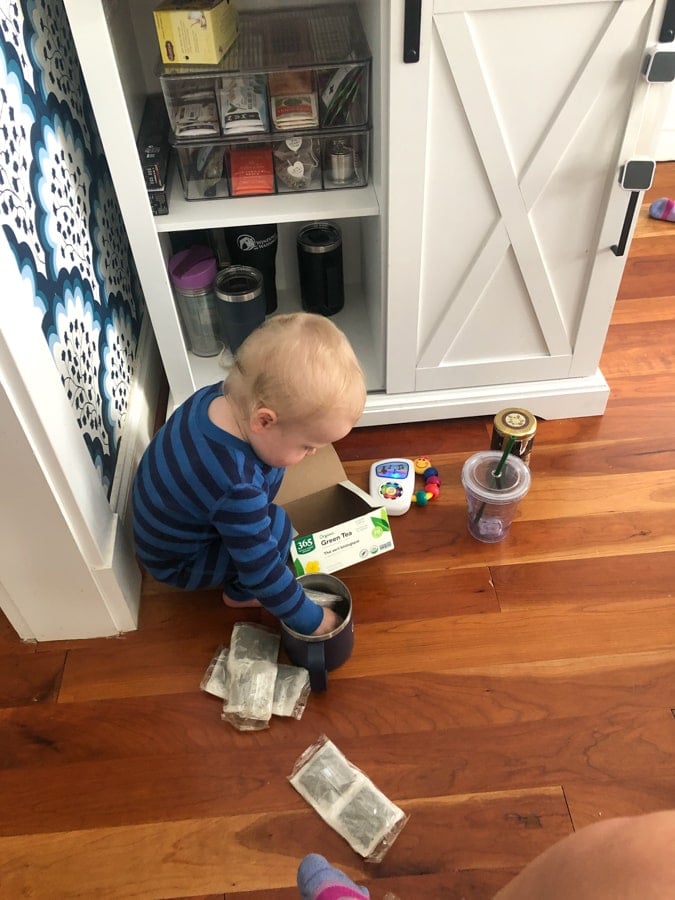 And then he had some more leftover breakfast burrito for lunch plus a peach and some peas, and I had a simple salad I forgot to get a picture of. Plus a peach as well!

He took an epic nap – from 12 to 3 – and after his nap we had a quick snack, then drove to my parent’s place to have some company for the rest of the afternoon + dinner.

I am fine doing our own thing in the morning, but by the 4 to 7 p.m. range I’m usually feeling a bit lonely and ready for some adult company, and a change of scenery!

My parents and I took Freyja the dog (yes, they still have her unless they are traveling – my dad loves her SO much I think it would break his heart to give her back to us at this point! they first took her at the start of the pandemic to “ride out the pandemic with a walking buddy”, but clearly that went on longer than anyone planned) for a walk with Wes in the stroller, then played at their house for a bit.

For dinner my mom made us my Salmon with Lemon Mustard Dill Sauce – yum, my fave! 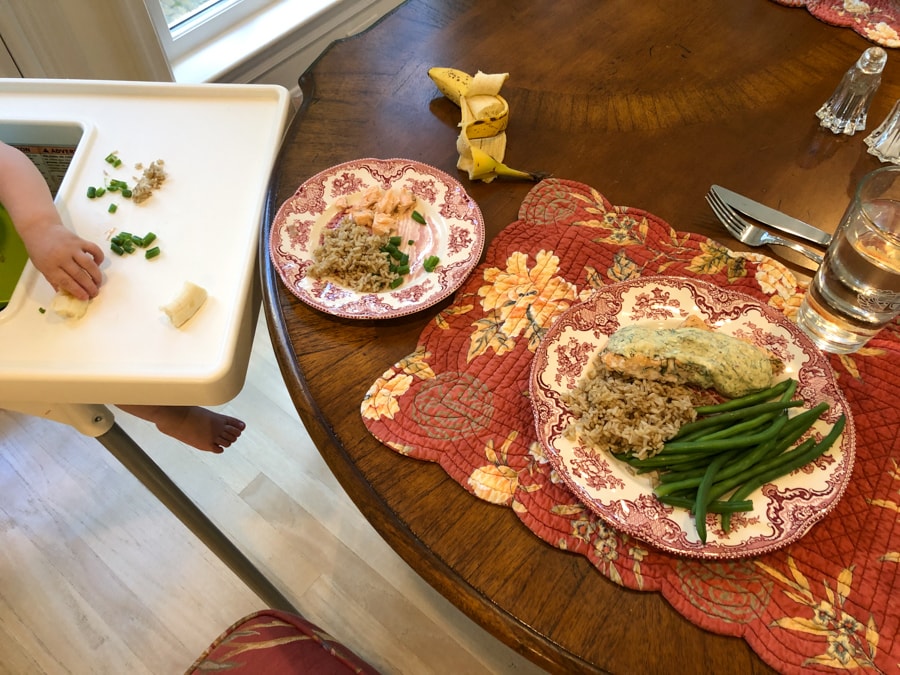 Wes used to love salmon but he’s been refusing it lately, so he had string beans, rice, and a banana instead, and Freyja was thrilled to get his salmon discards (his didn’t have sauce on it) that got tossed on the floor before I could stop him. Oh well!

I brought him home, got him to bed, and then watched more of my TV show. Wes took awhile to settle and I had to go in once to calm him around 8:30, but he finally went down.

Oof, Wes was up at 3:30am screaming so I gave him a bottle, and then he was up at 6 for the day. I think his nap was too long the day before… whoops.

Either way, I’m tired and not loving it, but here we are.

We shared an Ezekiel cinnamon raisin English muffin with almond butter and hemp seeds and another farmer’s market peach for an easy breakfast. 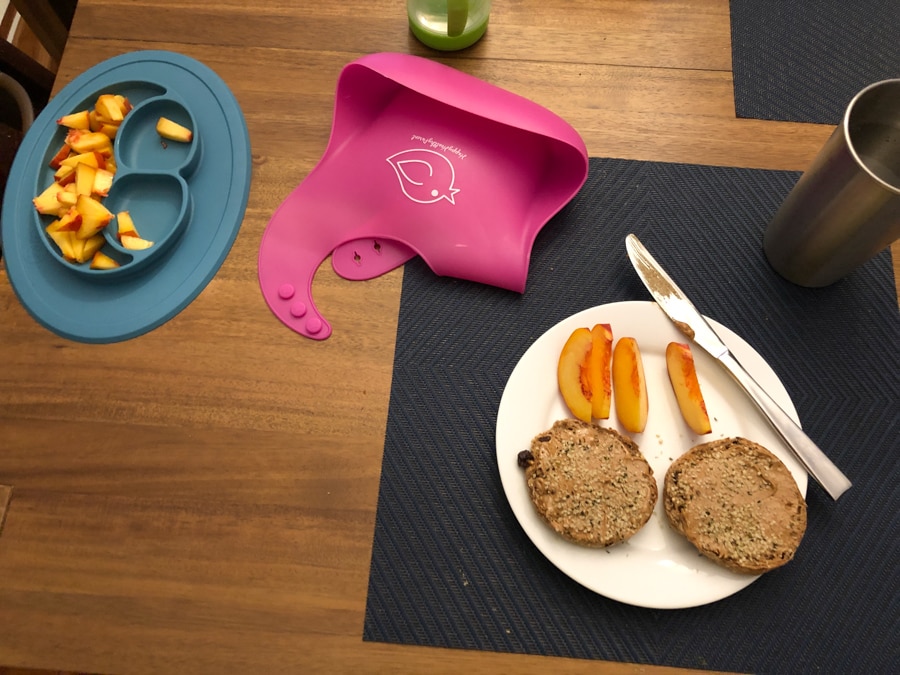 He was more interested in the peach than the English muffin (I gave him little bites of mine, so it’s not on his plate), so I ended up sprinkling hemp seeds on his peach as well to get him a little extra staying power.

After we ate, played a little, got dressed, and it was out the door to walk to the coffee shop again! Another beautiful morning – hooray! 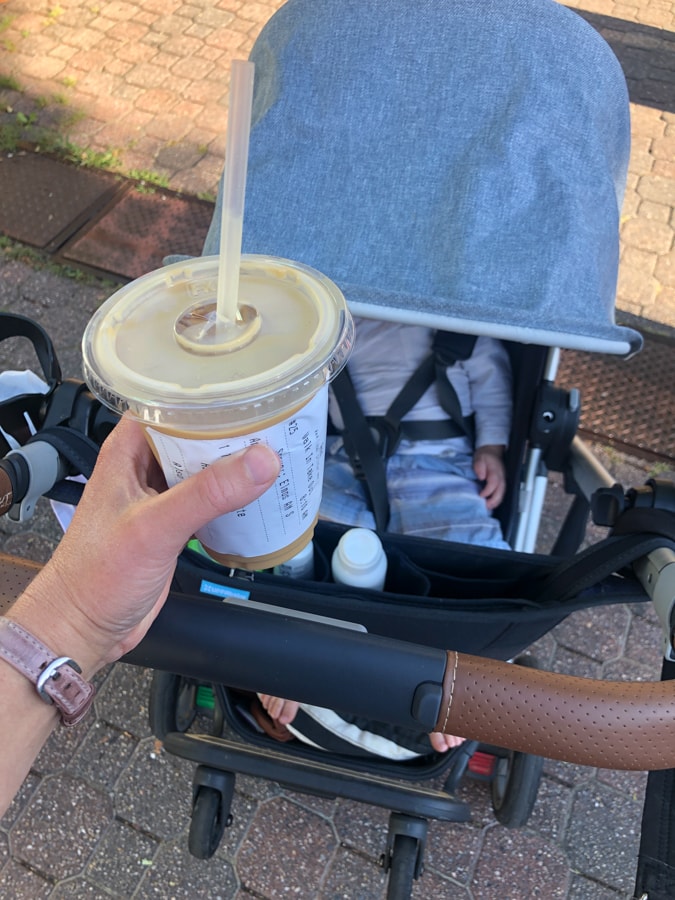 We took a short walk while I talked to Matt + Riese on the phone, then headed to the playground again.

Since it was early (about 8:30 by the time we got there) we pretty much had the place to ourselves! 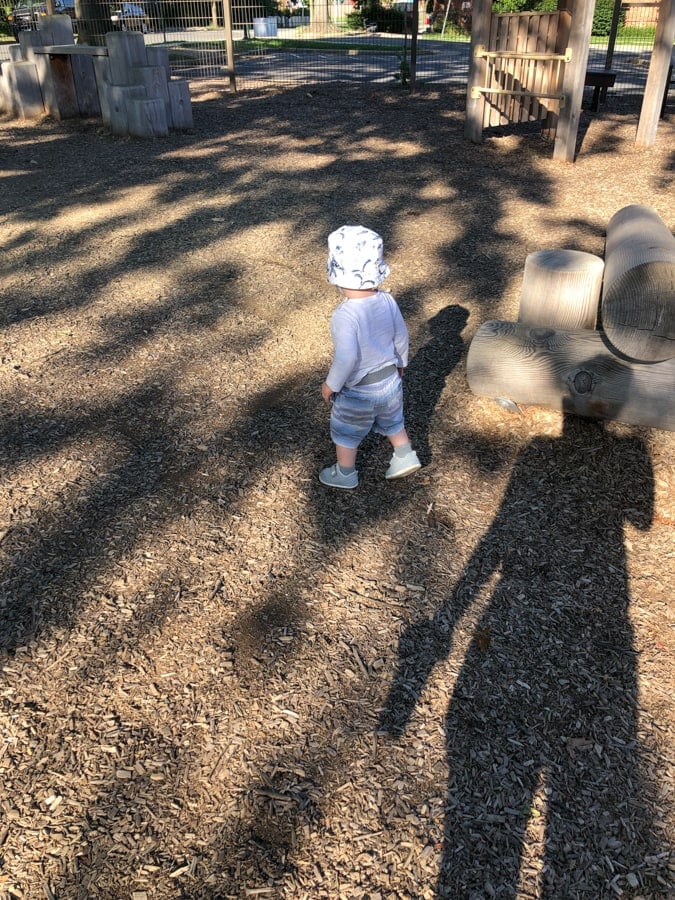 Wes was super into climbing things and doing some of the little balance beam type stuff – adventurous little guy! He doesn’t have any words yet – guessing he has been too busy with the physical stuff to do both?

Although he did just start singing “Twinkle, Twinkle, Little Star” to himself – not with words but just sound. It’s SO cute! He loves music.

We stopped for a snack around 9 – he likes these South Block snack balls and so do I! 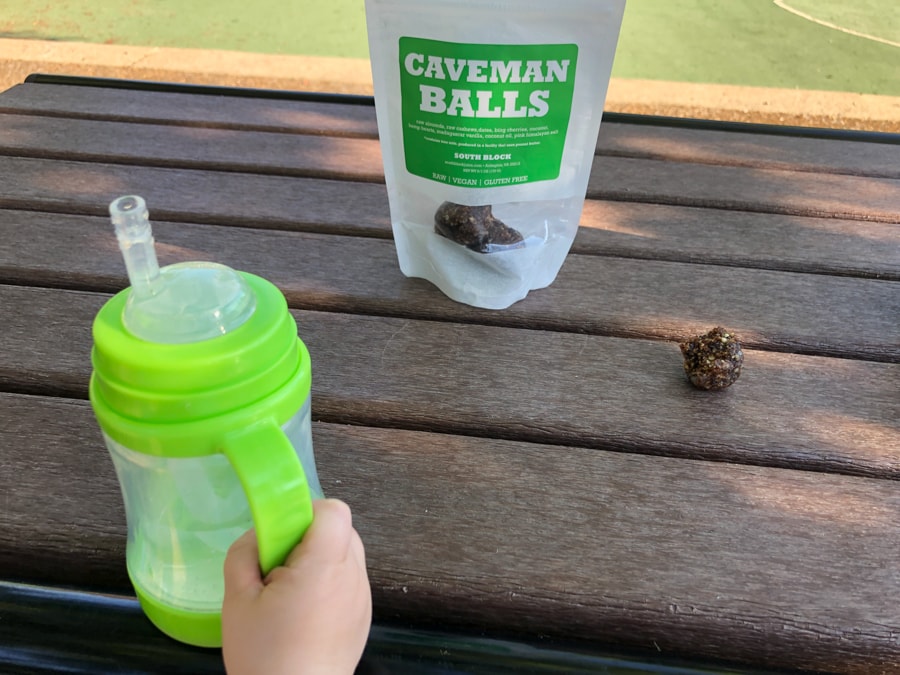 We headed home around 9:45 because I actually had a sitter coming at 10 so I could go to yoga + lunch with my friend Jen.

I was on the fence about doing this because I felt guilty but in the end I decided everyone would benefit from me having a refreshing break, so I went for it. The sitter that came is our date night sitter, so Wes is very familiar with her!

Yoga felt really good (we went to my local fave, Mind the Mat in Del Ray), and my friend and I grabbed lunch at Stomping Ground after. I love their salad with roasted chicken, feta, farro, and dried cherries – so good! 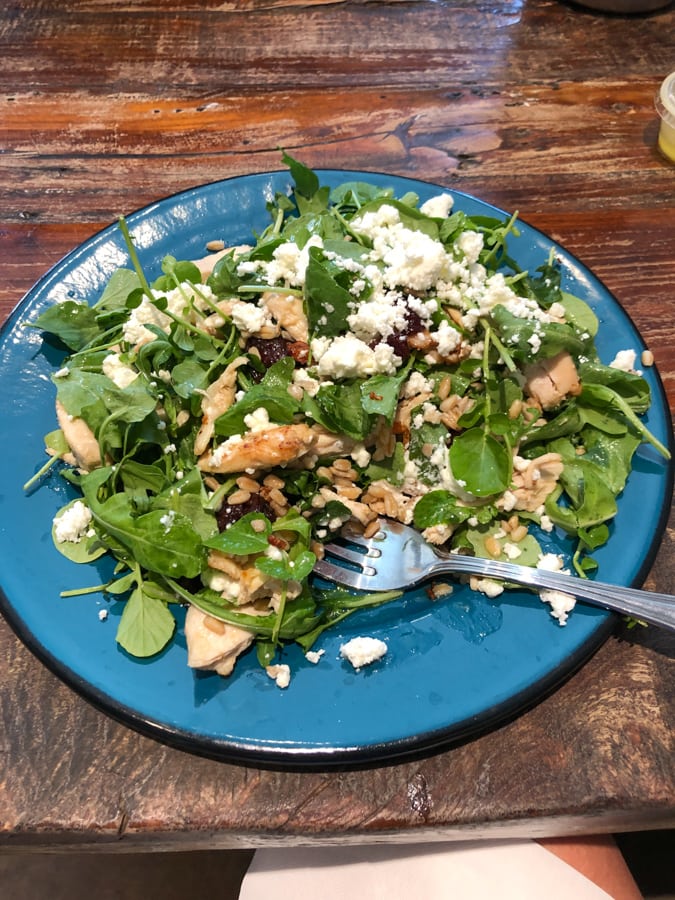 I was back home by 12:45, and Wes was down for his nap so I showered and relaxed until he was up around 3.

Post-nap we had a snack, then played for awhile before walking over to a neighbor friend’s house for a play date with their 2 year old.

Their son was feeling shy/grumpy and not interested in a playdate, but thankfully Wes was happy bumbling around their yard. We just stayed for a little while, but it was nice to have some brief adult interaction!

Back at home, we shared some chicken tacos for dinner – these had leftover cooked chicken, guacamole, a pre-chopped slaw mix with some lime juice, black beans, and a few chopped raw mushrooms. Plus some chili garlic cholula sauce.

They were quite good and easy to throw together! Wes was only interested in the chicken and guac, so I gave him some leftover pancakes from Friday morning as well to make sure he got enough food. 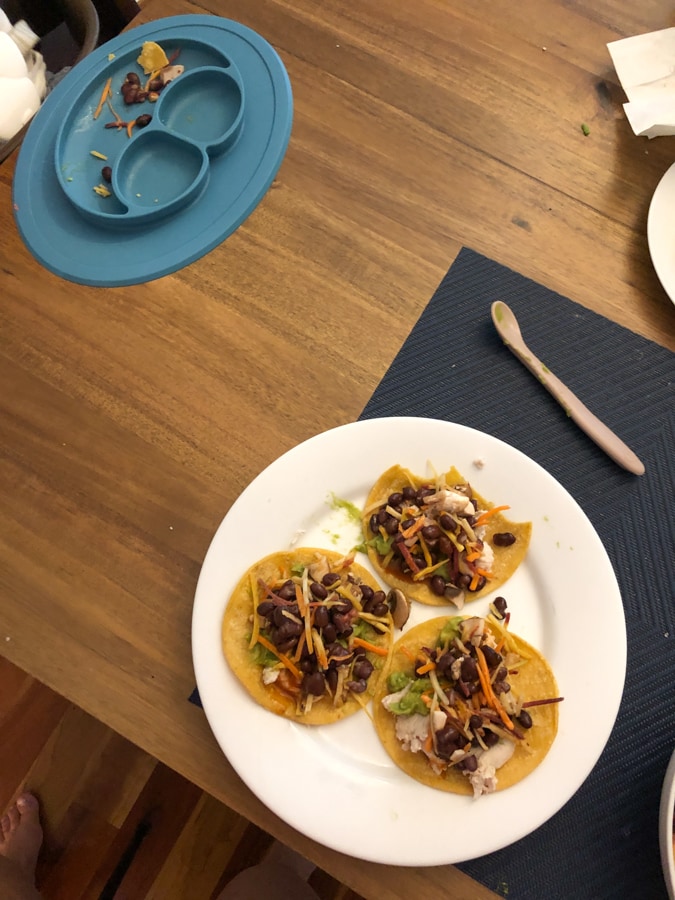 Against my better judgement, after getting Wes down for bedtime I stayed up and watched the last couple episodes of my show… which I majorly regretted at midnight when Wes woke up screaming and I had to go in and give him a bottle.

He has a little cold right now and maybe is also getting some new teeth? Who knows, his sleep isn’t normally THIS rocky anymore these days…

He was up for the day at 6 again yesterday (Monday), so I was definitely feeling pretty rough come morning. But I rallied as on Mondays we have a babysitter come so I can work!

I hope you had a nice weekend – see you back here on Friday with some Things I’m Loving Lately! 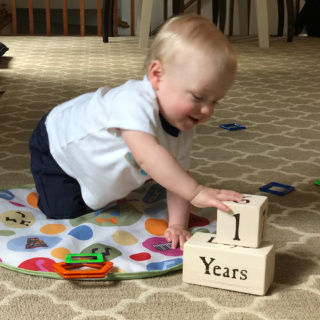 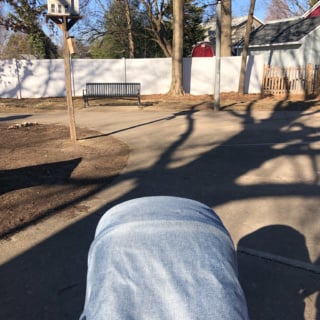 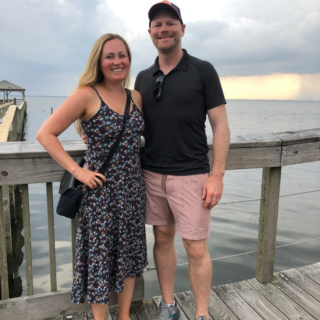 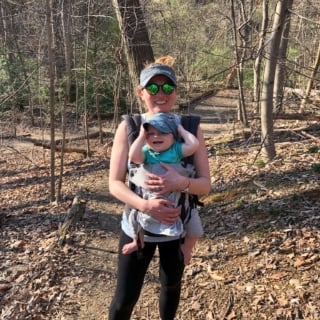