Adventures in Aspen + Tips on Flying with Toddlers

Right after Christmas, Matt, Riese, and I flew out to Aspen to spend a week hitting the slopes with my family!

If you follow me on Instagram, you know that trying to get to Aspen was a full 2 day odyssey/hot mess that involved multiple cancelled flights, lots of time to kill in airports, zero naps for Riese, a random unplanned overnight in Denver, and an eventual 5 hour car drive from Denver to Aspen the next night instead of flying there from Chicago (our layover en route from DC). Oh, and lost luggage for 3 days… 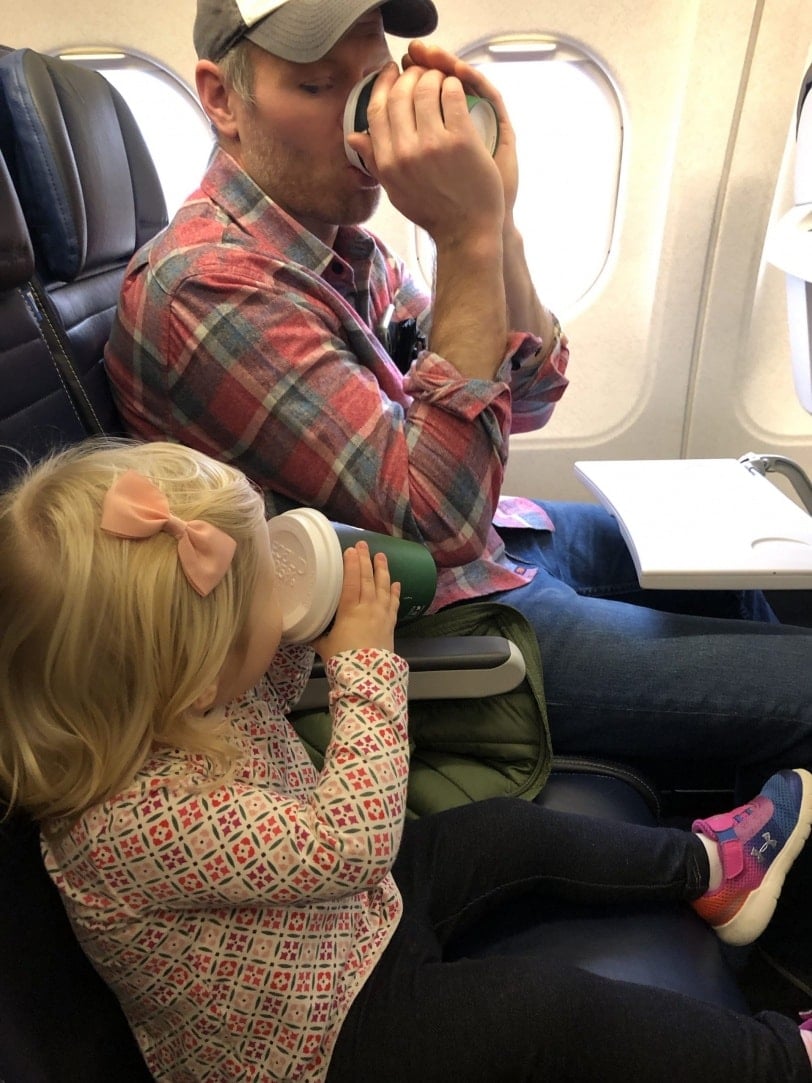 We were supposed to get to Aspen on early on Friday afternoon… instead we arrived super late on Saturday night. These views were very welcomed and worth the hot mess to finally get there! 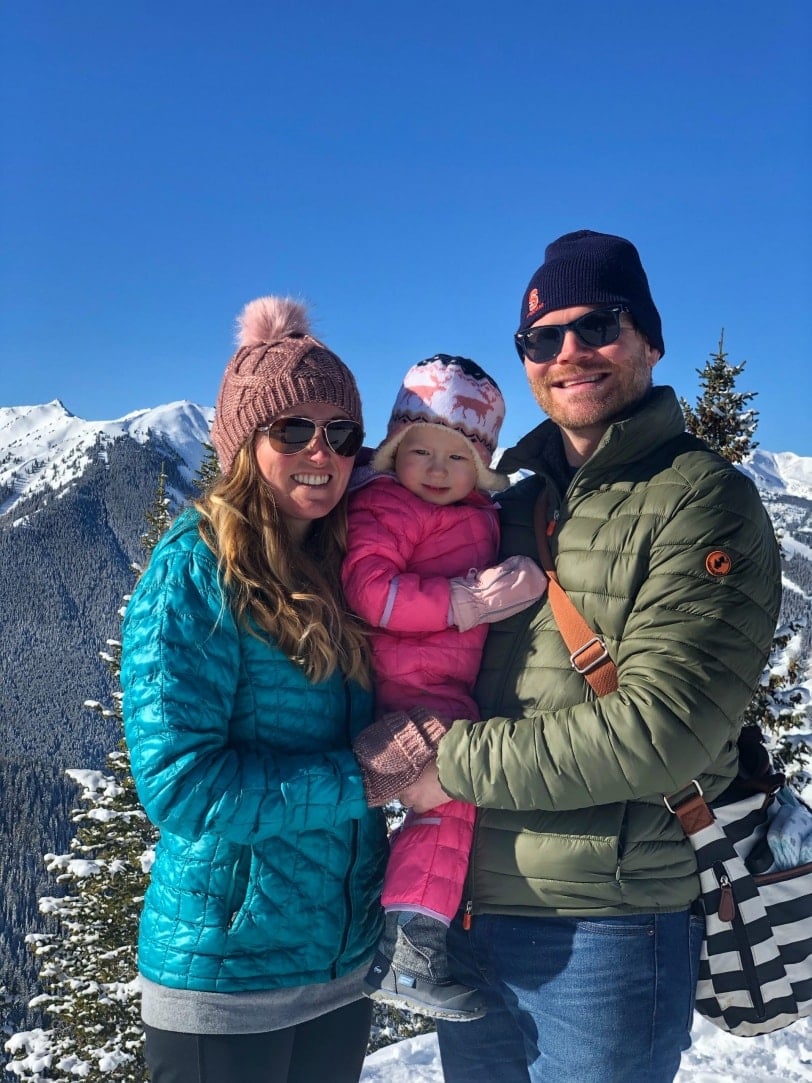 The main thing to do in Aspen in the winter is ski, of course, and the slopes did not disappoint. I had only been out west to ski once before (on a trip to Breckenridge in 2015 with grad school friends), so I was pumped for some beautiful mountain views and powder! 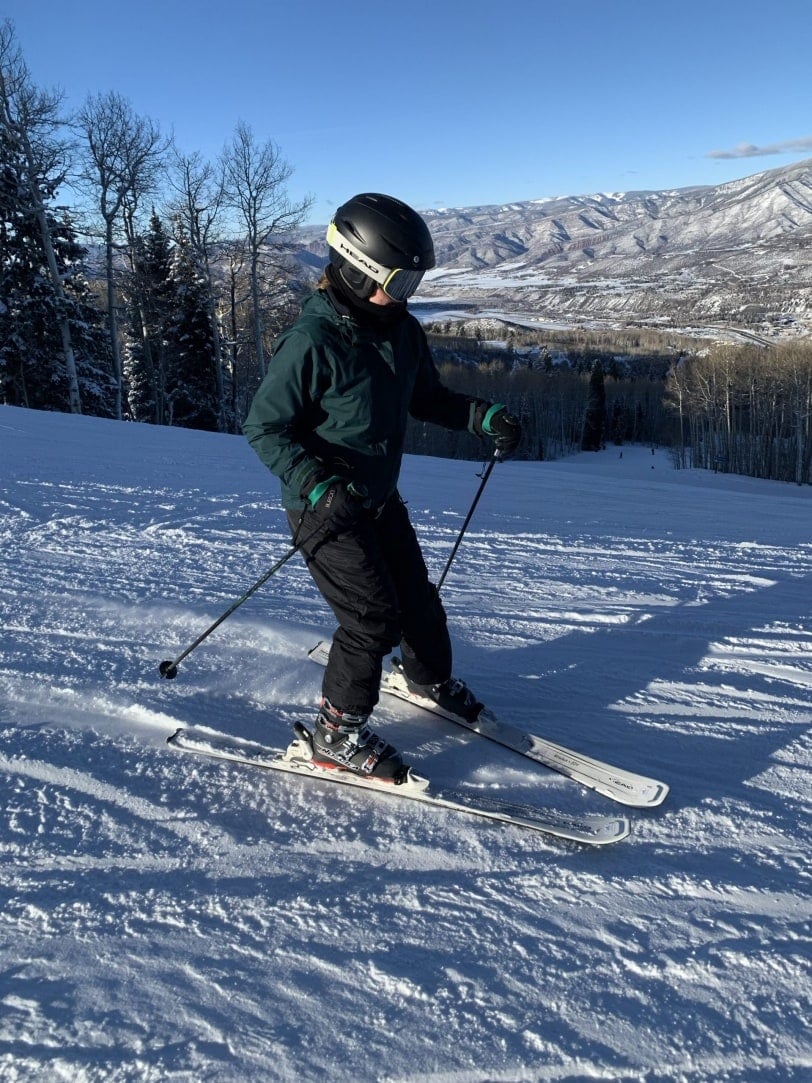 Unfortunately the mountain we were staying on (Aspen Mountain) was too advanced for me to ski, but Buttermilk Mountain was about a 10/15 minute shuttle away and it was lovely – lots of super long, meandering green + easier blue runs with amazing views to boot.

Conditions were good, too, thanks to all the snow that fell while we were trying to get to Aspen – and also mid-week!

Matt and I mostly traded off skiing – he usually went out early with my family to ski the harder slopes while I hung out with Riese, and then I went later in the day – but we did get to go together twice thanks to my mom babysitting over naptime – thanks, mom! 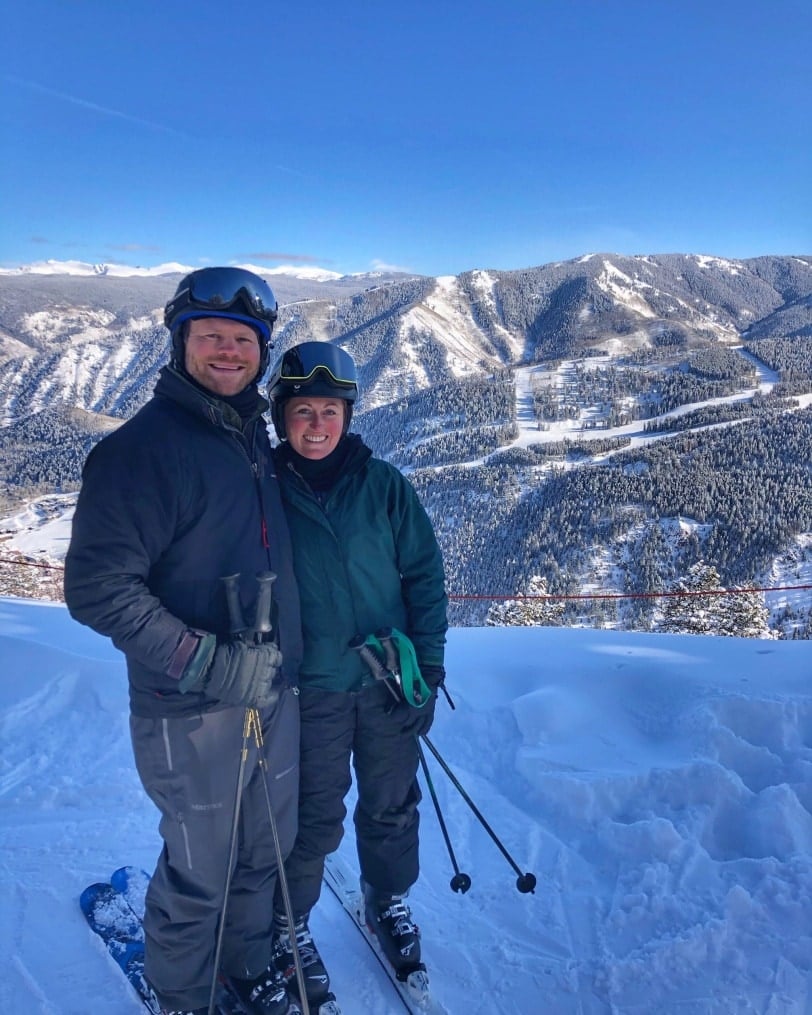 The last time we went skiing was 3 years ago, right before I got pregnant with Riese, so it took my legs a little while to get back into it, but once I got more confident I had a lot of fun out there. I felt a little left out that I couldn’t ski with the others on the mountain we were staying on, so that was a bummer, but the other mountain was great and an easy trip! I only ended up skiing 3 times but that felt just about right – it always kills my legs!

Besides skiing, I had one other snowy adventure – one day during naptime while Matt rested with Riese after a morning of skiing, I took the gondola to the top of Aspen mountain to go snowshoeing!

The views up there are insane, you guys. 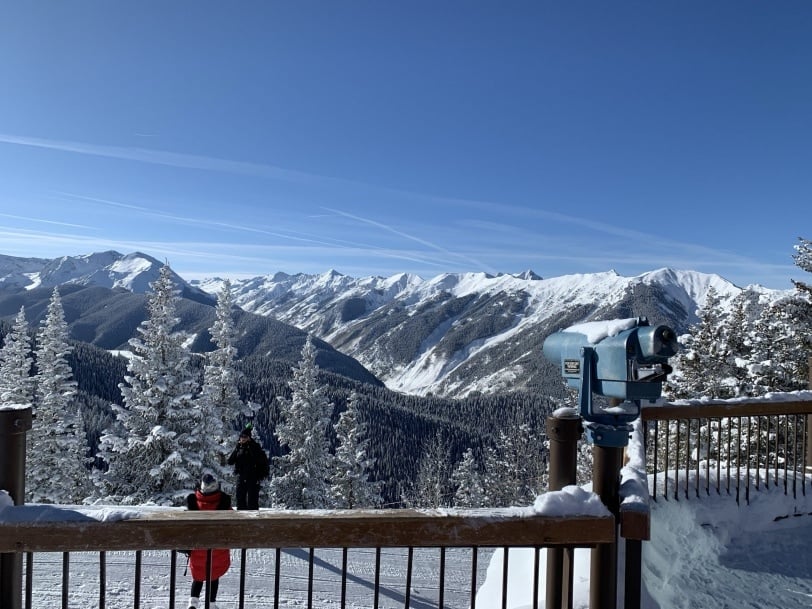 I joined one of the official snowshoeing group tours, and while it was a lot more standing around and listening to the guide talk (which was interesting, but I was cold and wanted to keep moving) than I had hoped, it was still crazy beautiful.

We went on the other side of the mountain, the one that doesn’t have any ski slopes, and the snow was really deep – the snowshoes were definitely necessary! 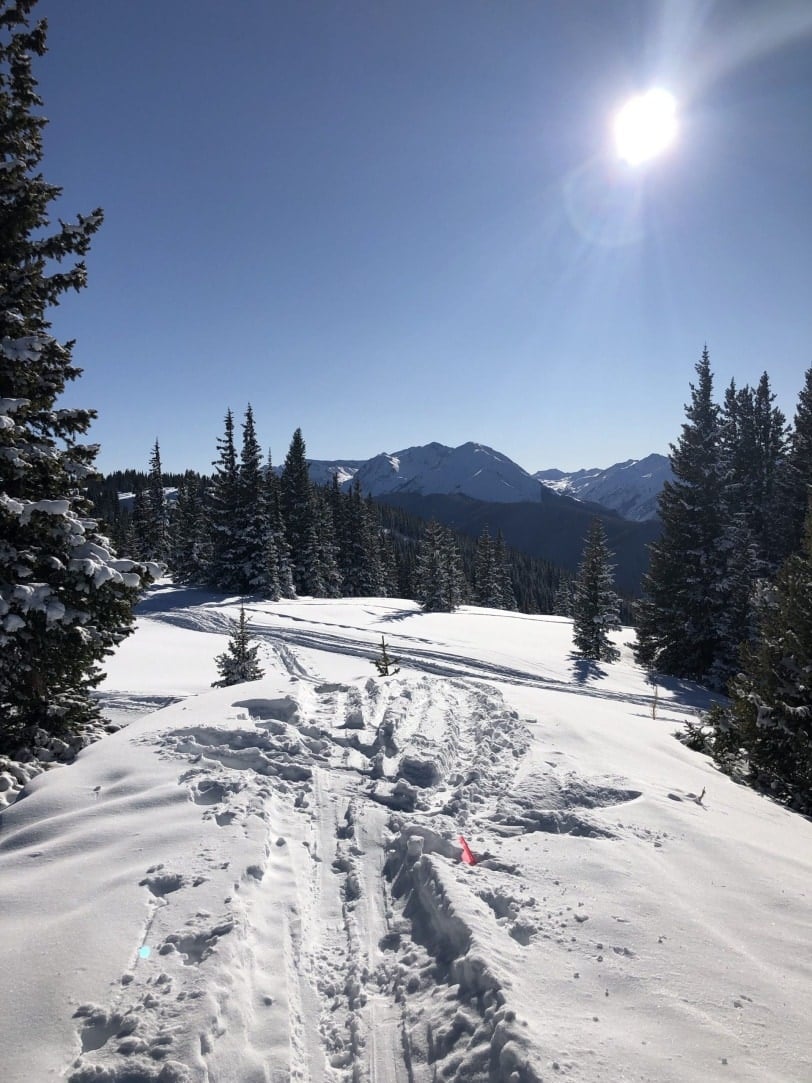 I couldn’t get enough of the views! 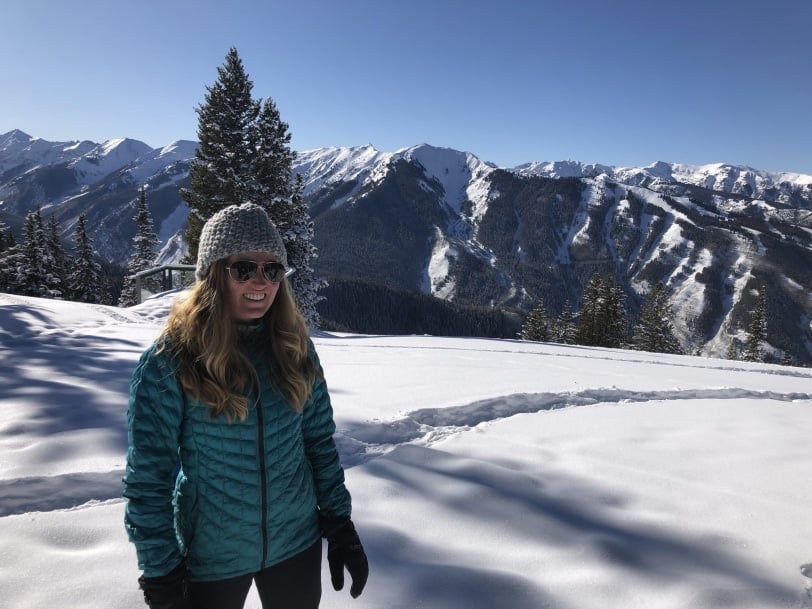 We took Riese up the gondola to see the views on the top of Aspen Mountain one clear, sunny day as well – she was into it and didn’t seem at all phased by the heights! 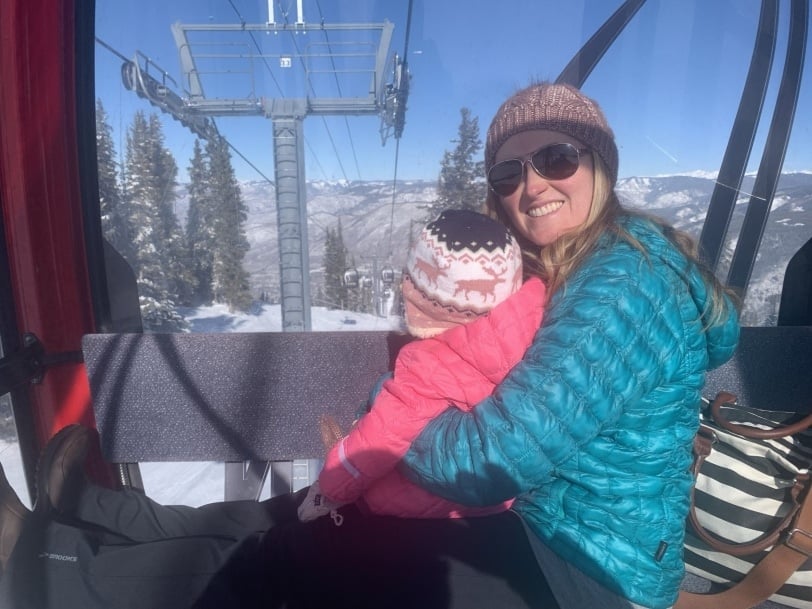 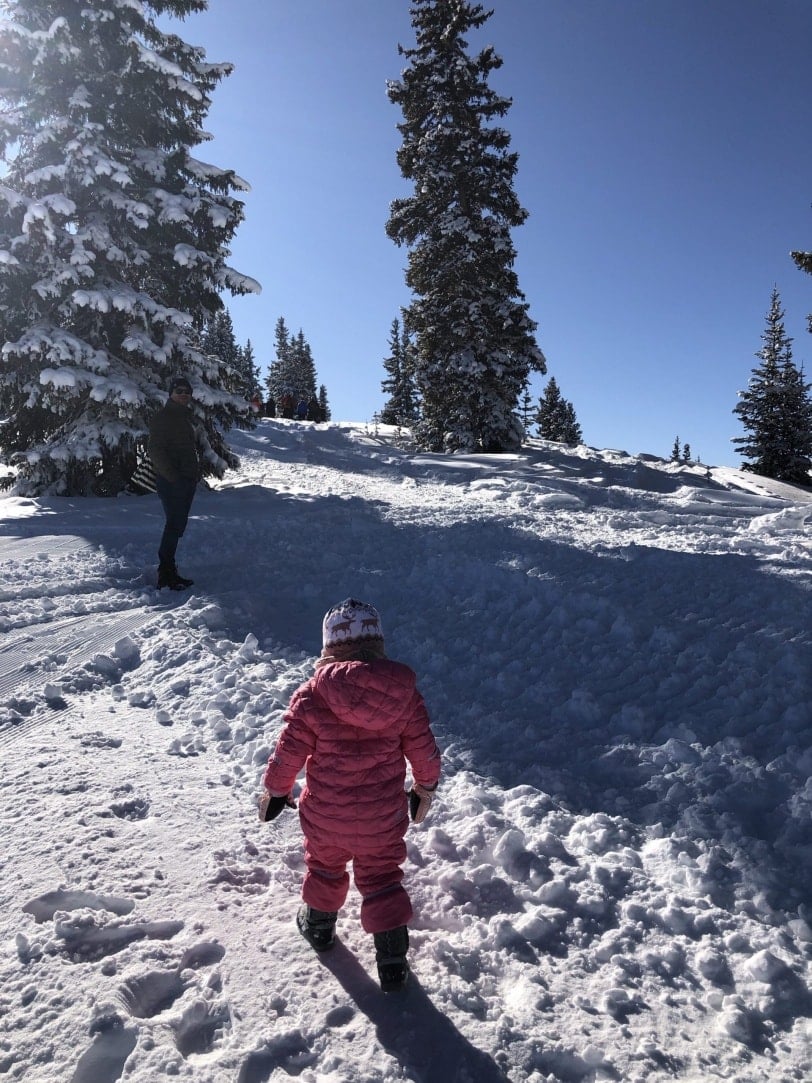 We had lunch with Riese at the lodge on the top of the mountain by the gondola that day – the food options were surprisingly varied and delicious! Matt, Riese, and I shared some pork pho, a really yummy salad, and an orange. 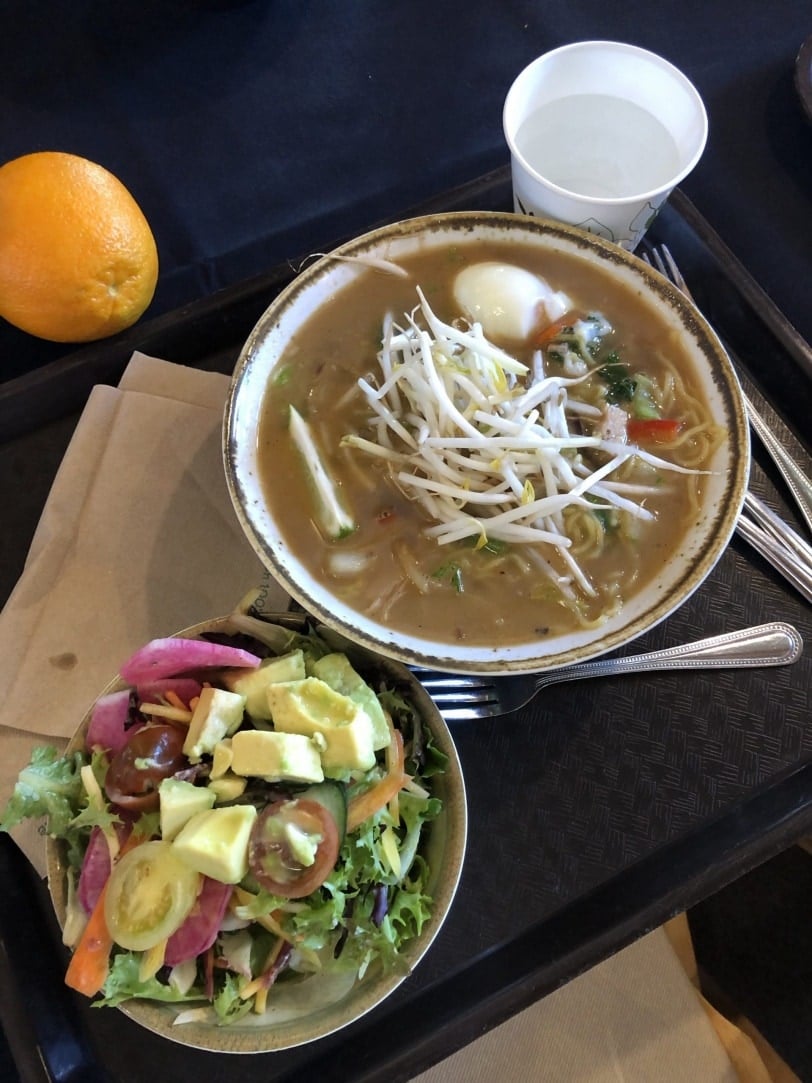 The food at the lodge on Buttermilk Mountain was great, too – I was only up there one day at lunchtime but some chicken, white bean, and kale soup, cornbread, and salad hit the spot! We had a lot of super delicious (but heavy) dinners while in Aspen – lots of steak – so I was craving lighter lunches. 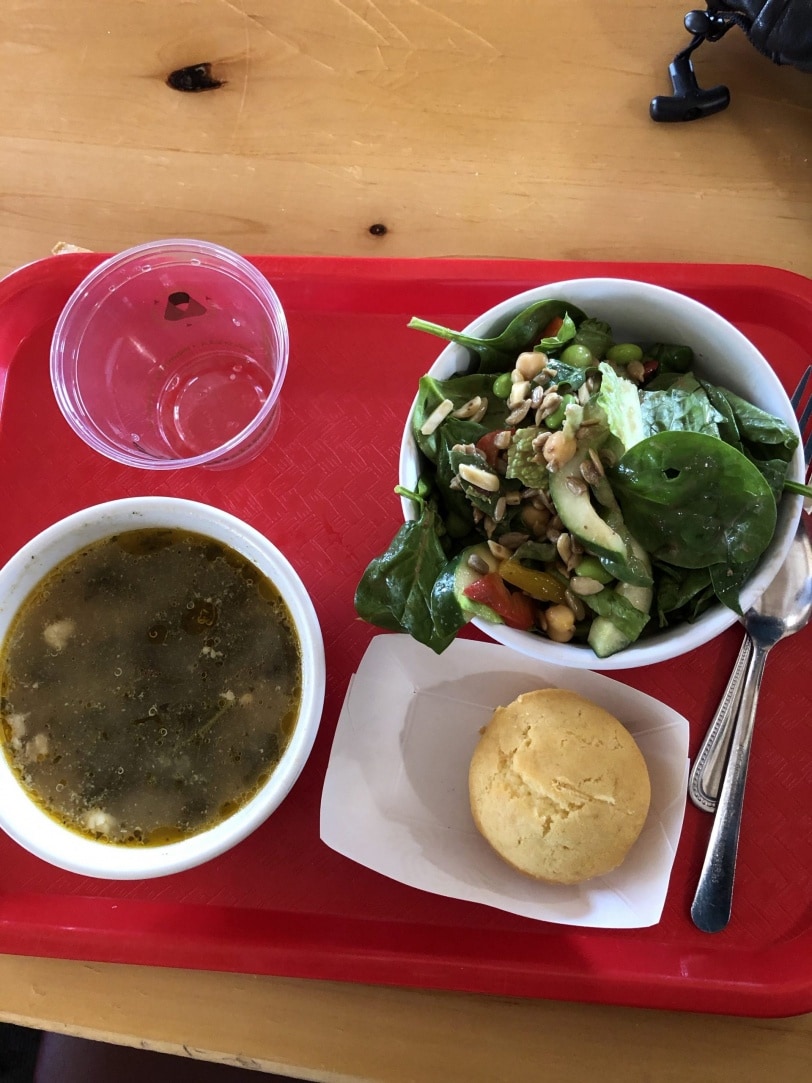 I actually didn’t get many dinner food photos – it was pretty dim in the restaurants we went to and I wanted to just relax and enjoy, but Aspen’s food scene is legit (but pricey)… we had some really amazing meals with my family.

If you’re in town and looking for a cheap/easy/fast dinner option, check out Big Wraps (sooo good and they had breakfast wraps that were great too) and the NY Pizza spot – both super low key and affordable. 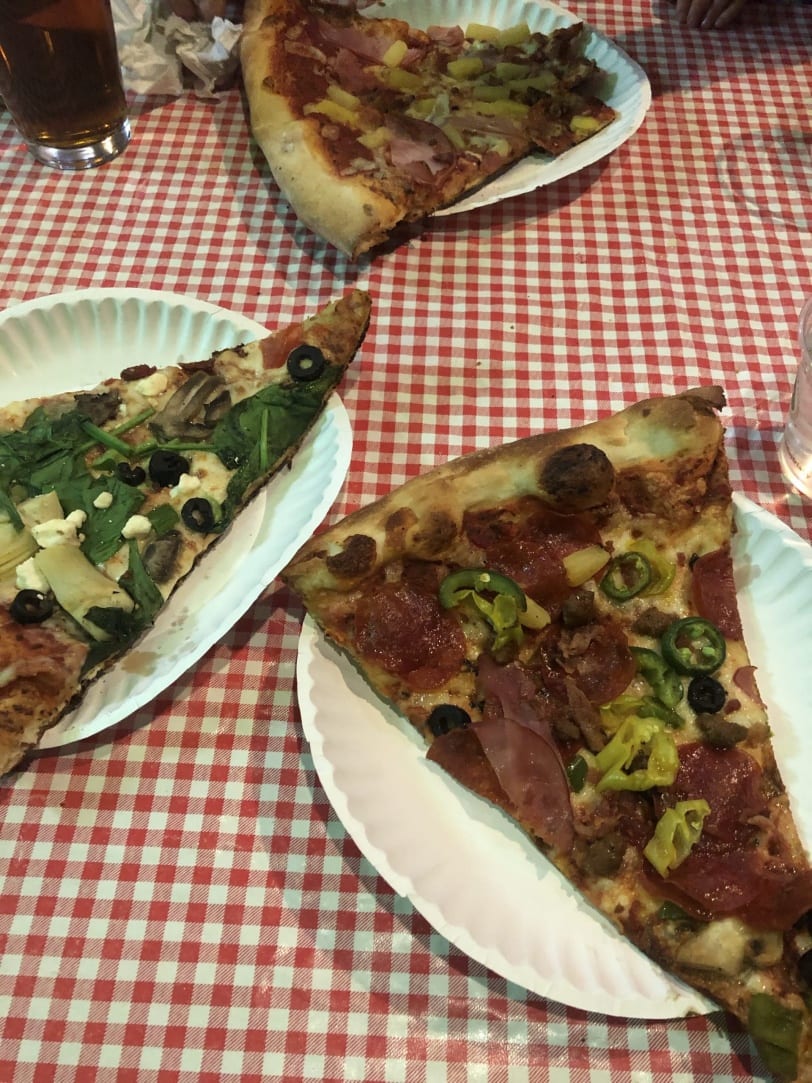 The town of Aspen was really cute and I loved how walkable everything was. It was so pretty with all the Christmas decorations still up, too! If you’re in town with a kid, be sure to check out the library – Riese loved their play area! 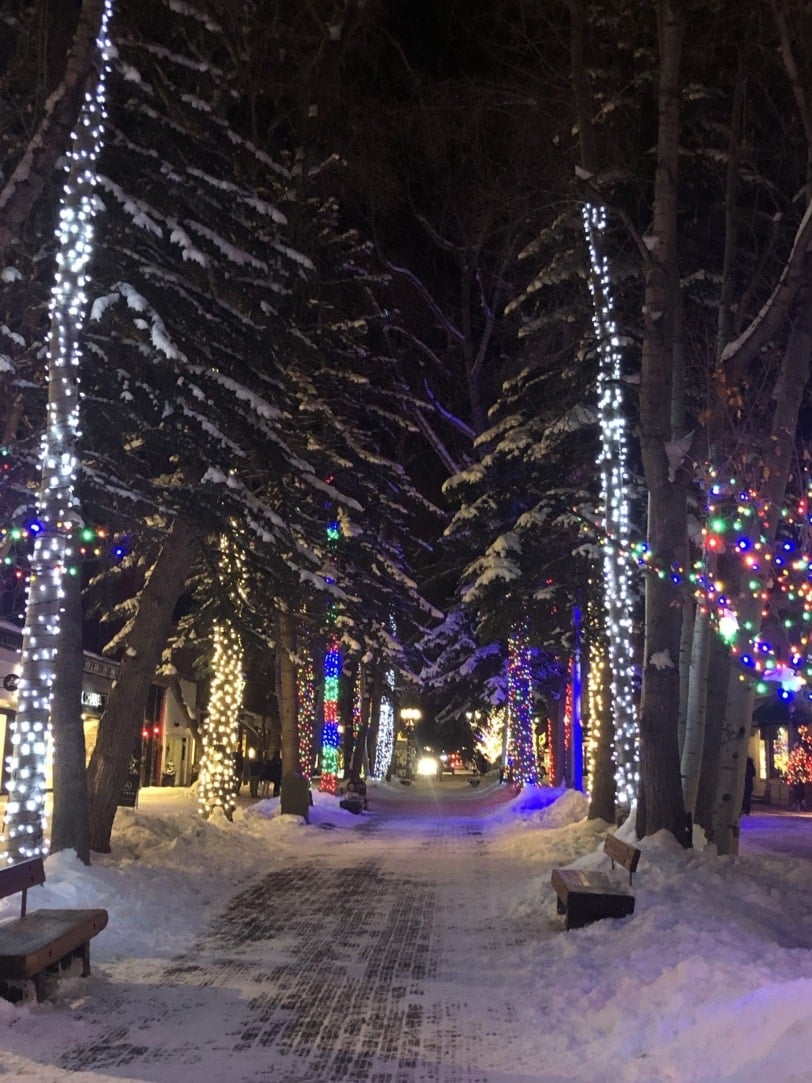 On New Year’s Eve they shot off fireworks over the slopes at both 8 p.m. and midnight – we caught the 8 p.m. early bird show with Riese and she was absolutely fascinated. It was so beautiful! 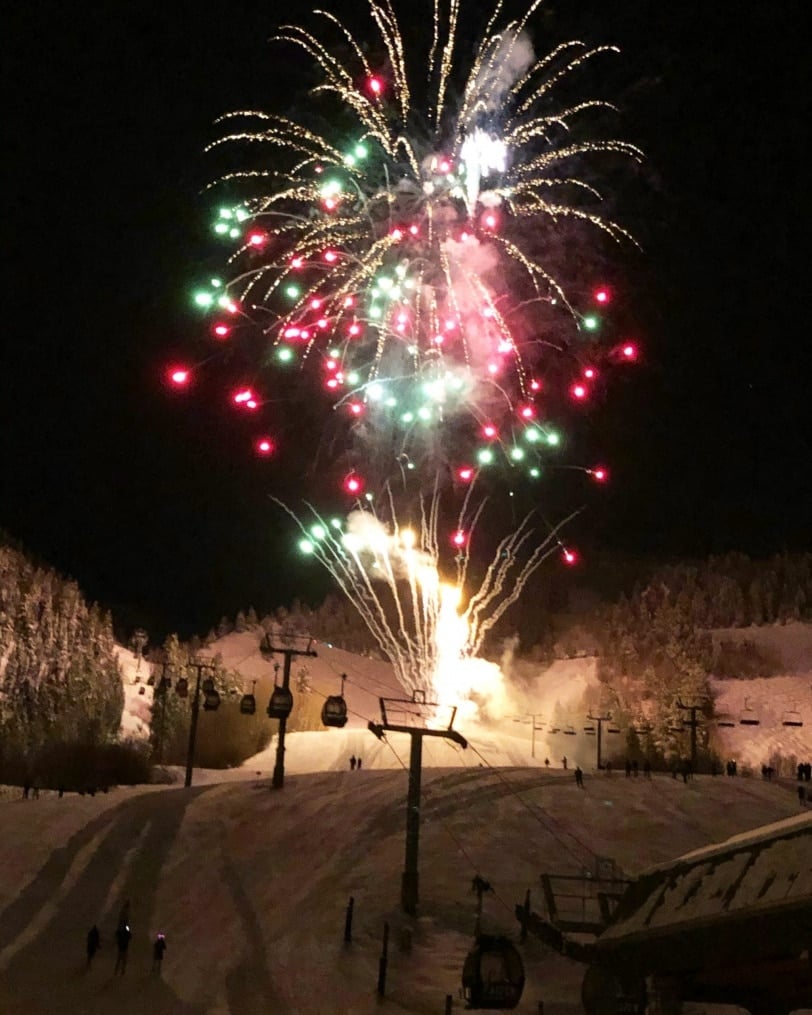 Other highlights from the week included a few fitness classes!

First up was a yoga class at O2, which was recommended by an Instagram follower. It was a lovely class and had the most amazing mountain views from the studio, and although it wasn’t cheap (a drop in was $30) it was definitely worth it as a treat: 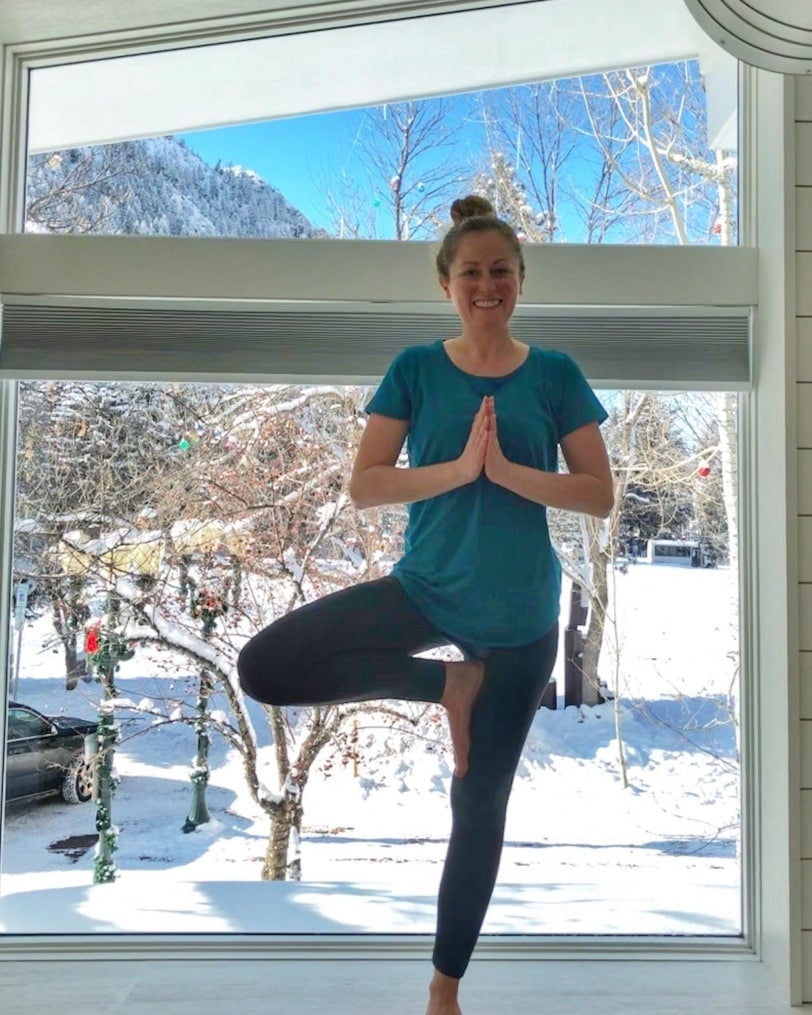 The other two classes I went to were via ClassPass (<- affiliate link for $40 off) – I love that you can use your account to attend fitness classes in any city, super convenient!

I checked out Aspen Shakti one day for a vinyasa yoga class that was lovely – the studio was really pretty and the instructor led a really nice, creative flow: 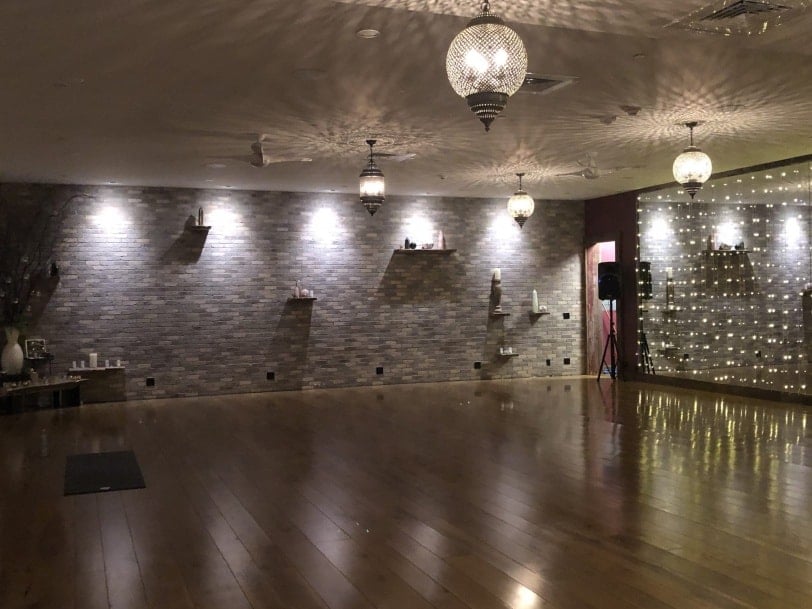 And then early the morning we left Aspen, I got up and out to get in some movement before sitting in airports all day via a HIIT boot camp class at Ritual Aspen. I didn’t get any pictures but it was AWESOMEEEE and led by a guy named Joe, so if you find yourself in the area check it out. I was so sore – it was tough, especially since I haven’t been doing a lot of strength training lately!

I will leave you with a few travel tips for those of you that have toddlers (these are mostly tips that we didn’t do/learned the hard way and I want to make sure you don’t make the same mistakes, ha): 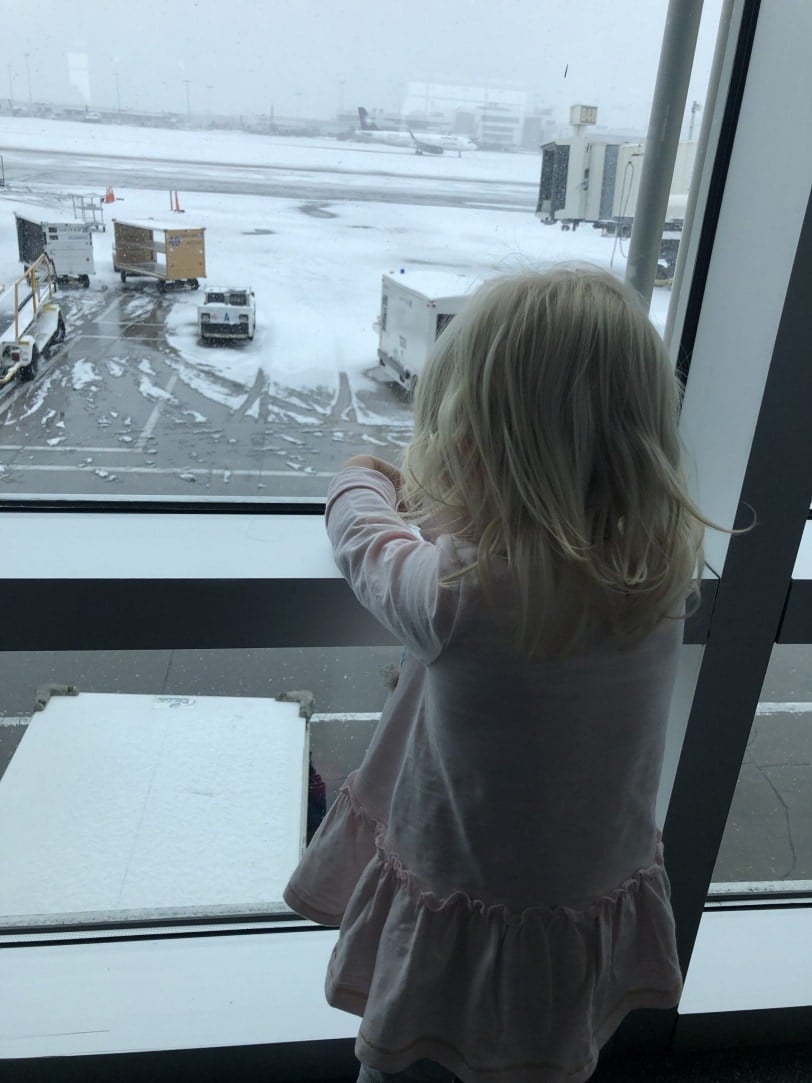 Have a great day and I’ll see you guys back here on Friday with some food + fitness from the week! Aspen was a lot of fun, and we were so grateful to have gotten to go on such a cool adventure, but it’s been pretty nice to get home and back into a routine. 🙂 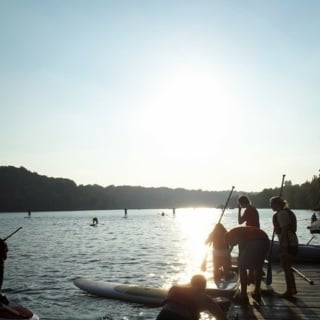 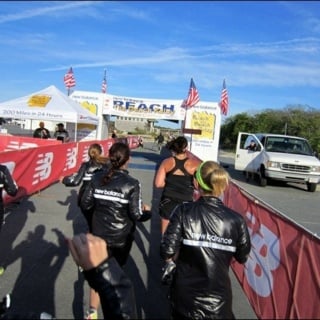 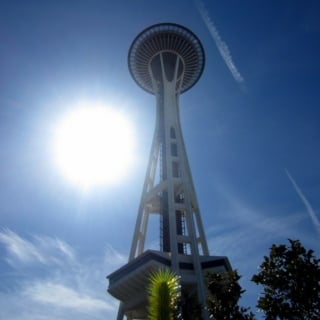 What to Do & Where to Eat in Seattle

Eating & Biking Our Way Through Austin