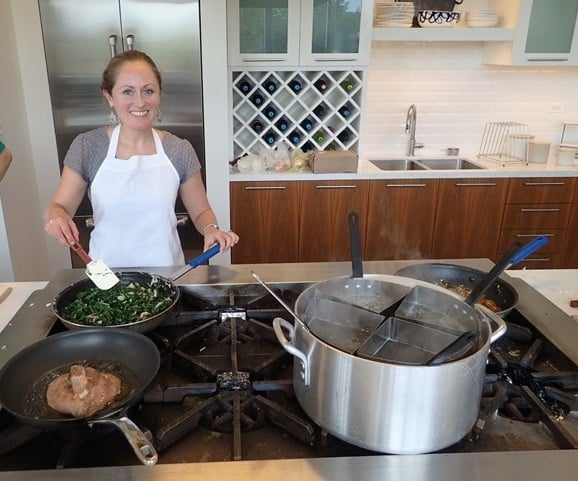 Adventures in Urban Farming and Cooking with Barilla

As you guys may have seen on Instagram, I spent Monday and Tuesday on a fun quick overnight trip in Chicago with Barilla. I was at their headquarters with some fellow Registered Dietitians to learn more about pasta nutrition and their company’s history and recent initiatives. We also got to do a fun cooking challenge in their (gorgeous and huge) kitchen! 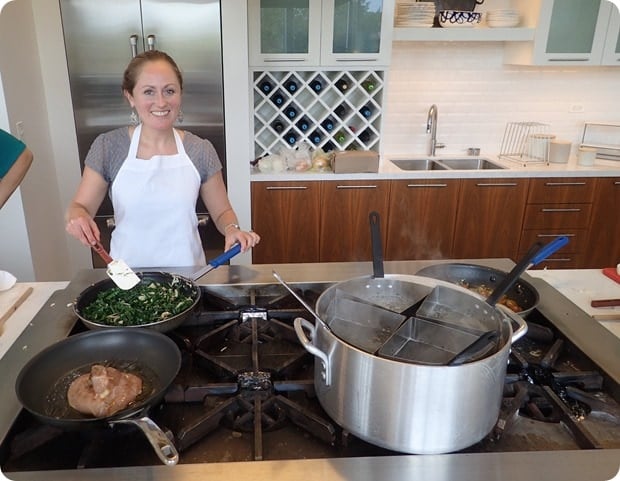 A big thank you to Barilla for having me, for covering my trip expenses, and for sponsoring this post.

The trip began on Monday afternoon in Chicago with a hands-on experience at an urban farm run by Growing Power, which is an amazing national nonprofit organization that Barilla supports locally. Growing Power provides communities with access to healthy, high quality, and affordable food, as well as training and job opportunities. They have a few urban farms in Chicago, and we visited their Grant Park farm. So cool to see this thriving right in the middle of the city! 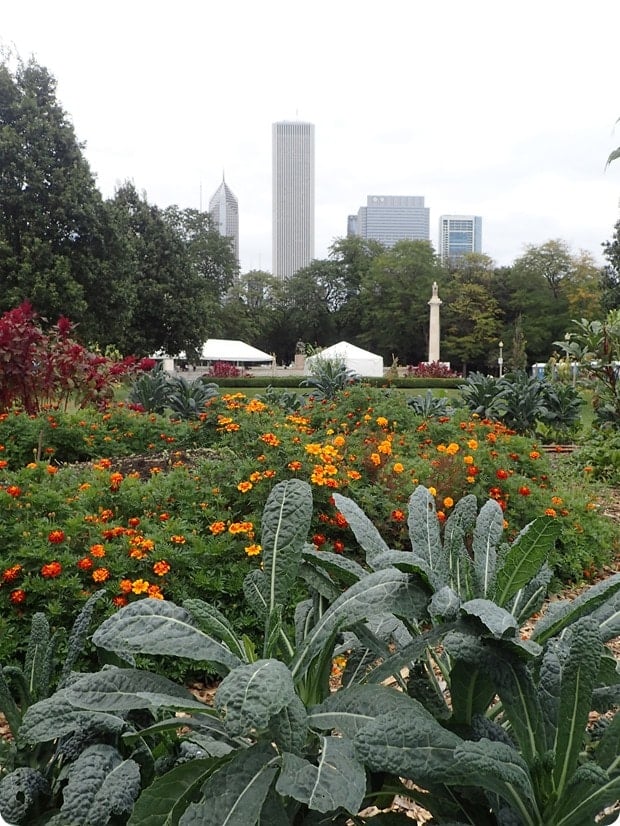 Those red plants below are amaranth – I had no idea it looked like that! 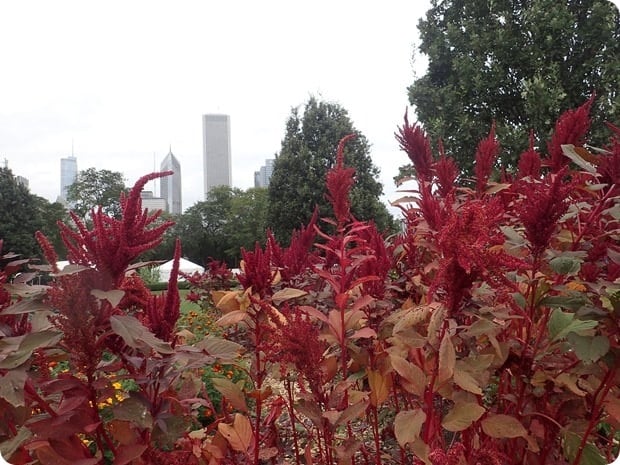 It was interesting to talk to some of the staff on site – most of them have been working there for many years, starting as part of the “youth corps”. The youth corps is a paid program for kids (starting at age 14) that, via an apprenticeship, teaches them about nutrition and trains them in valuable skills like how to garden, cook, and compost. Many of them transition to full time staff members later in life! One of them, when asked why he likes working at Growing Power and what he has learned, said it has taught him a lot about problem solving and how to work with others. He’s also really proud of getting kids excited about veggies and healthy food! Remember when I taught kid’s cooking classes via a community organization as part of my dietetic internship back in 2011? It’s so true that getting kids involved in the growing and cooking process makes them MUCH more likely to try new foods! (See also: How to Get Kids Excited About Healthy Food)

Growing Power also runs a cool mobile veggie market out of an old renovated bus (just one now, but two more are in the works) painted by a local artist. It brings affordable fresh produce (and cooking demos and nutrition education) to areas of the city that need it; they partner with local organizations to get the word out about it and hand out schedules so people know where to find it when. In addition to the cheap prices, they also accept food assistance program vouchers. 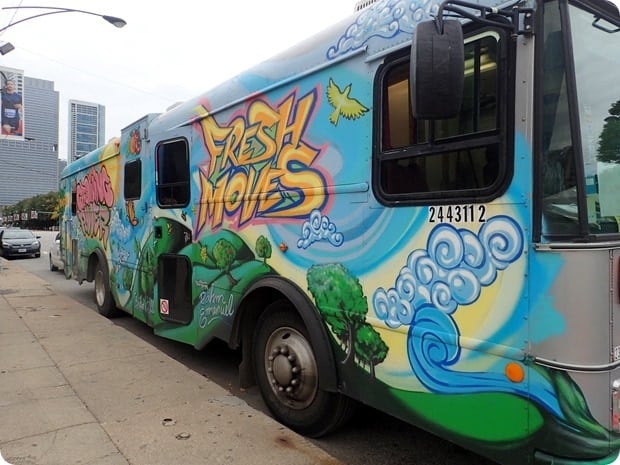 Here’s the inside! It’s an old renovated city bus – neat. 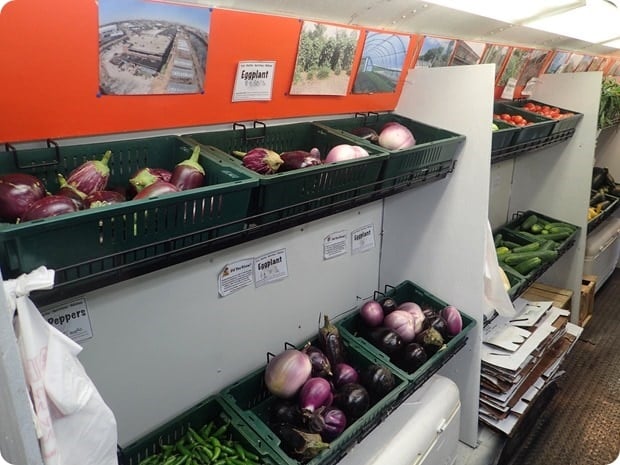 Biggest zucchini ever! Any produce they don’t sell gets donated or composted, but they said they usually sell a lot of it. 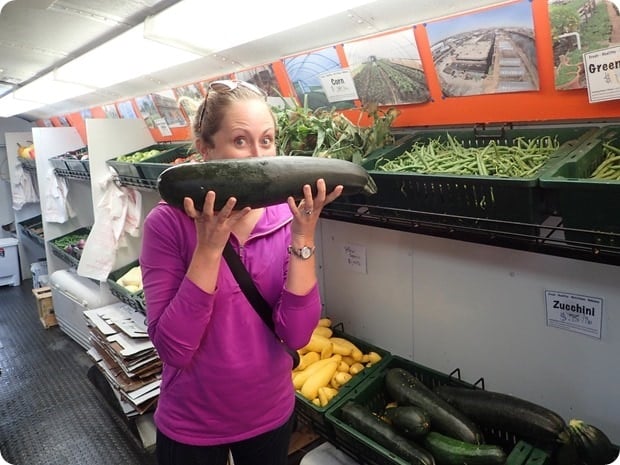 Barilla donates pasta for the vans – if you buy $5 worth of produce you get a box of pasta for free. 🙂 They also have recipe print outs available featuring the pasta and produce for customers to take with them, and have been working on creating some prepared “grab and go” healthy meals that people can buy for cheap, too. 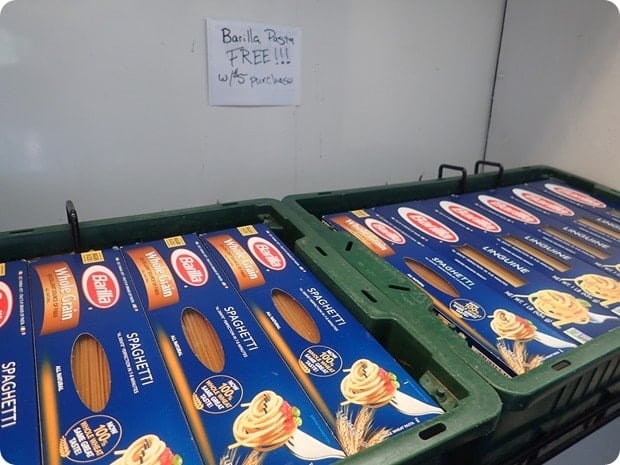 After learning more about Growing Power, we were put to work! We spent a couple hours helping them prep their gardens for the change in season. My group harvested basil and planted some new lettuce – fun! 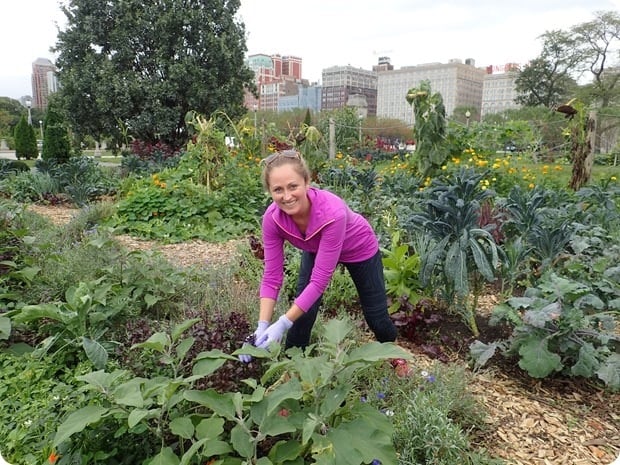 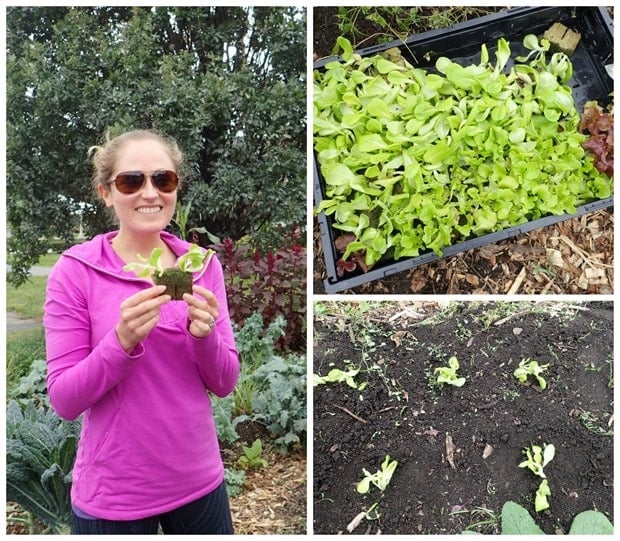 On Monday night we were treated to a delicious dinner at Piccolo Sogno, a popular Italian restaurant in Chicago. I didn’t get any food photos because the lighting was so dim, but I had the wild boar pasta dish for my entrée, which was delicious! I almost ordered the salmon but I always have salmon so I thought I should mix it up – glad I did! 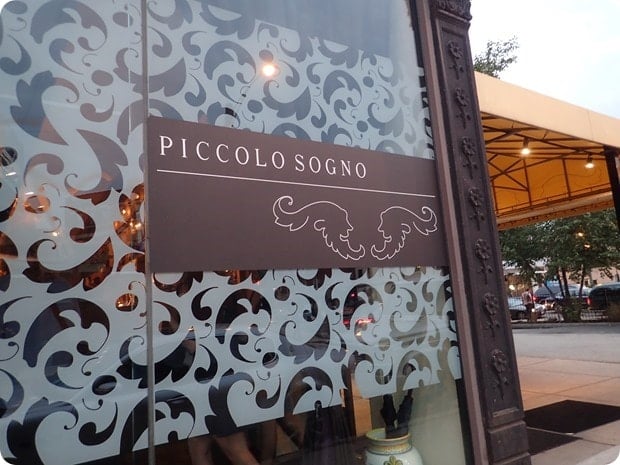 On Tuesday morning, I was hoping to get in a fun Chicago run before we left for the day’s activities, but our start time was 6:45 a.m. – yikes! We were at dinner until about 10 on Monday and I decided sleep was more important. Guess I’ll have to see the sights there via my running shoes another time! 🙂

We spent all of Tuesday at the Barilla headquarters, which is about an hour outside of downtown Chicago. Here I am with a few of the other dietitian attendees – from left: Melissa Joy Dobbins, Jen Haugen, and Jenna Braddock. I sat next to Jen on the bus ride out and we had a lot of fun chatting – check out her new book “The Mom’s Guide to a Nourishing Garden”! 🙂 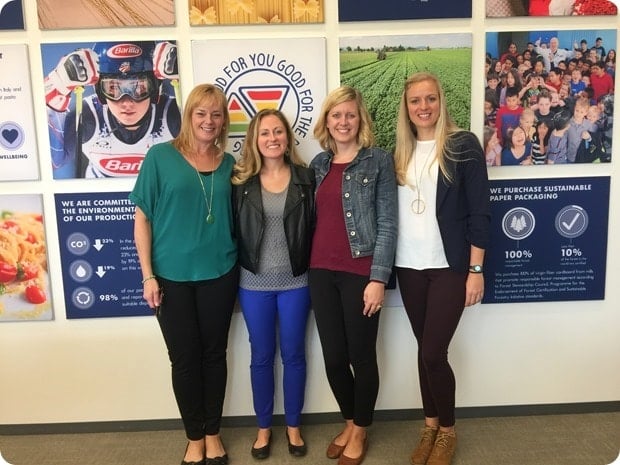 It was cool to hear more about Barilla’s history straight from their staff – everyone was obviously very passionate about their jobs! We learned a lot about pasta nutrition, too, including some things I didn’t know.

After learning all about pasta nutrition, we enjoyed a cooking demo from Barilla’s executive chef Lorenzo Boni, who is from Bologna, Italy, and first joined Barilla in 1999 at their headquarters in Parma, Italy before transferring to their Chicago office in 2003. He had a lovely Italian accent. 🙂 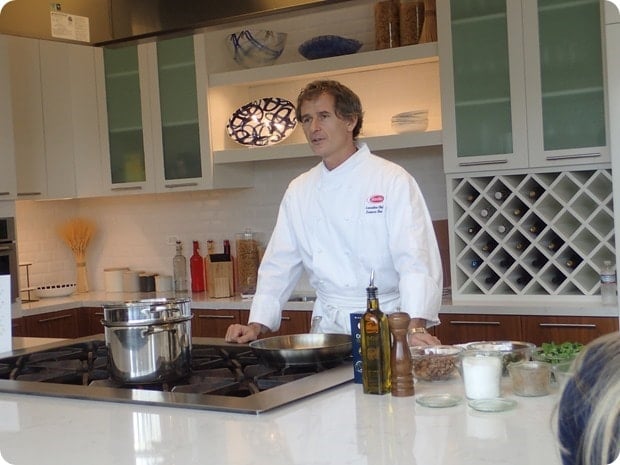 Lorenzo walked us through how to make an awesome pasta dish. His #1 tip: cook the pasta a few minutes less than the recipe calls for, and finish it off in the skillet with the rest of your ingredients as well as a little of the pasta cooking water. This helps meld the flavors better than just mixing it last minute. Interesting! 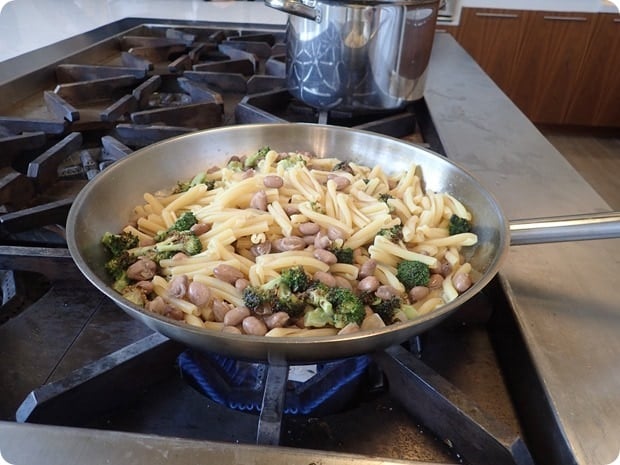 We put our newfound skills to the test with a fun cooking challenge! We were put into teams of four and given a variation of this pasta recipe builder to use as a reference. My group decided on the following ingredients: 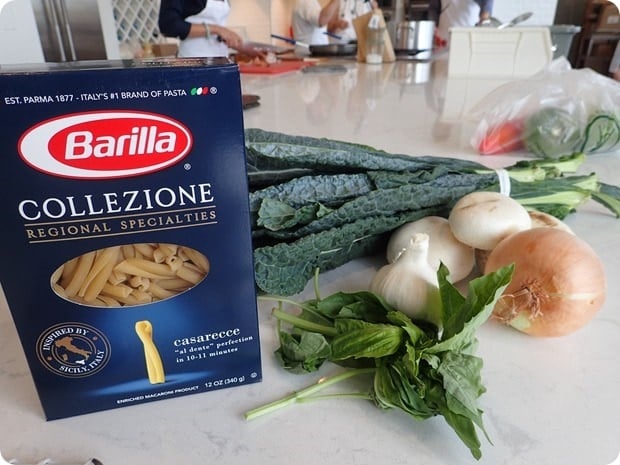 My group was fun because all of us are free form cookers in that we don’t love measuring things! Perfect that we were all in the same group. 😉 We got, um, “creative” with the measurements and just winged it – cooking at its finest! 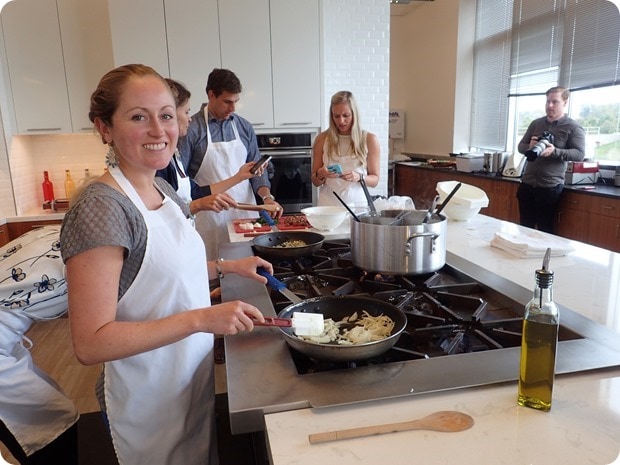 We started the onions and the garlic in the pan with some olive oil until the onions were soft, then added the mushrooms and, a couple minutes later, the (mass quantities of) kale. Meanwhile, we cooked the chicken in another pan and had the pasta boiling. 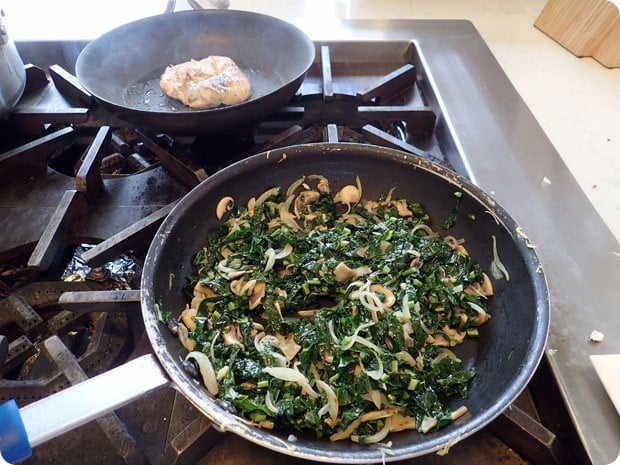 We took Lorenzo’s advice and finished off our pasta in the pan with the rest of the ingredients. Totally doing this at home – it comes out really well!

All ready to eat! 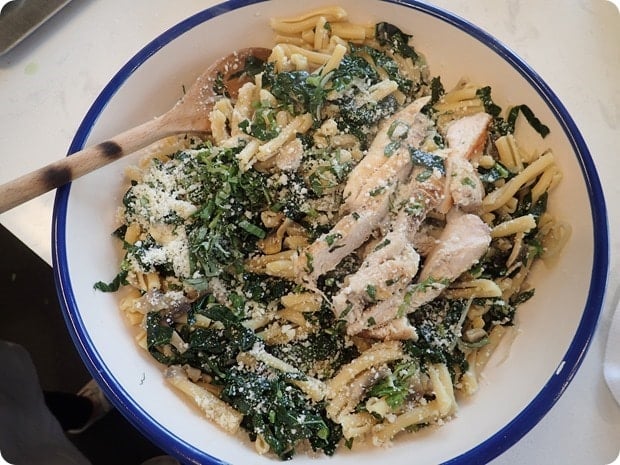 Here I am with chef Lorenzo and my cooking challenge team – from left: Melissa Joy Dobbins, Kristina LaRue, Marie Molde, and me! 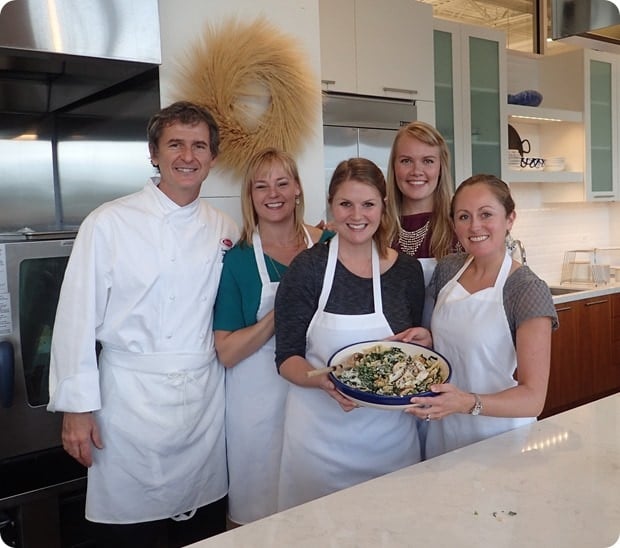 We enjoyed everyone’s cooking creations for lunch, along with some gorgeous roasted cauliflower and salads! p.s. Our recipe tied for 1st place from Chef Lorenzo – sweet! 🙂 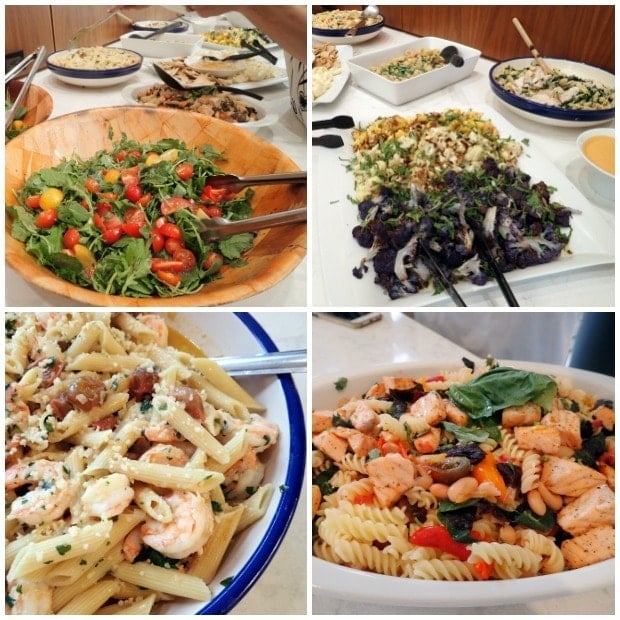 My plate – a little of everything! Besides my own creation, my other fave was a vegan and gluten free creation from one of the other teams made with canned beans and gluten free pasta. It was super creamy and delicious – apparently they used the liquid from the can of beans to thicken it up! Genius! 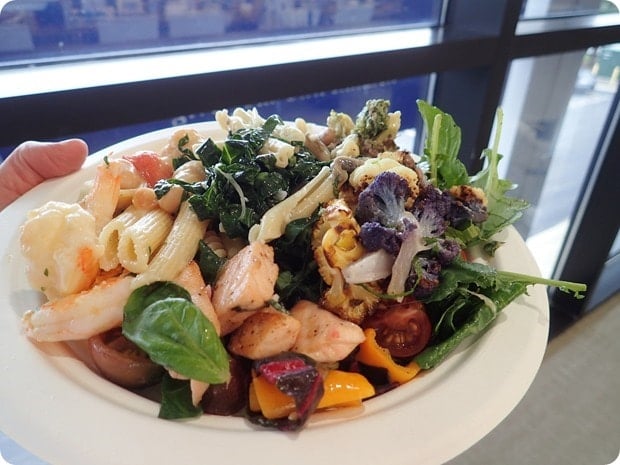 Thank you again to Barilla for having me for this fun and informative trip!

What’s your favorite pasta recipe? A lot of clients come to me feeling guilty or bad about eating pasta – don’t feel guilty about eating something delicious, my friends! The key is just to balance that pasta with some great veggie volume, protein, and fat, so it’s satisfying. So for example if you usually have a big plain bowl of pasta, try replacing half that pasta with veggies (and add some protein, like beans, chicken, or shrimp). You’ll be eating the same volume of food but it will be much more satisfying and nutrient packed. 🙂

Here are a few of my favorite easy pasta recipes from over the years: 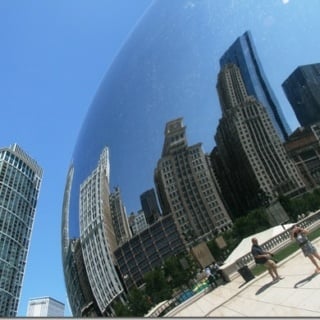 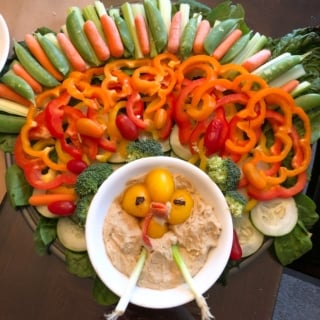 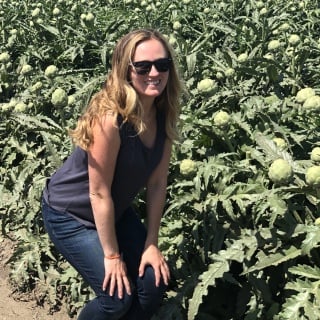 Adventures in Food and Farming 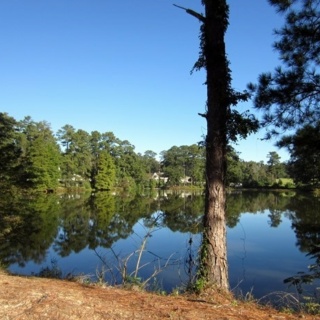