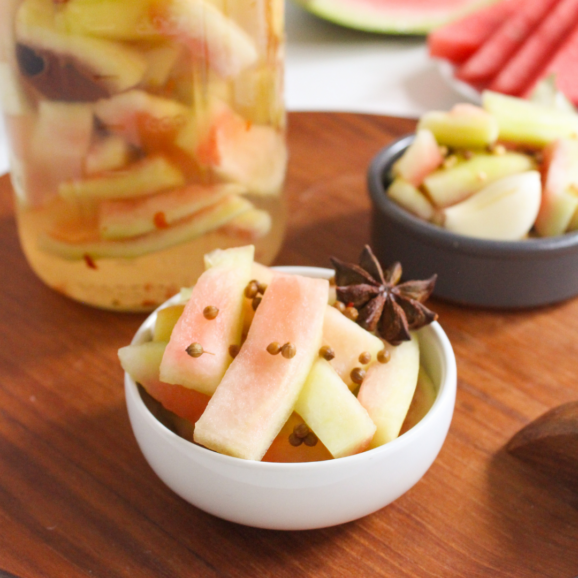 Introducing your new favorite snack and topping all in one: fermented watermelon rind pickles!

The next time you enjoy some watermelon, do yourself (and the planet – less waste!) a favor and be sure to save the rind so you can give this yummy recipe a shot. Fermentation is easier than it sounds, I promise.

In addition to helpful fermentation tips, I’m also sharing two different flavor/spice variations to enjoy: a sweeter version with cinnamon, anise, and ginger, and a savory version with mustard seeds, bay leaves, and garlic. Let’s get to it!

Thank you to my friends at The Watermelon Board for sponsoring this post. 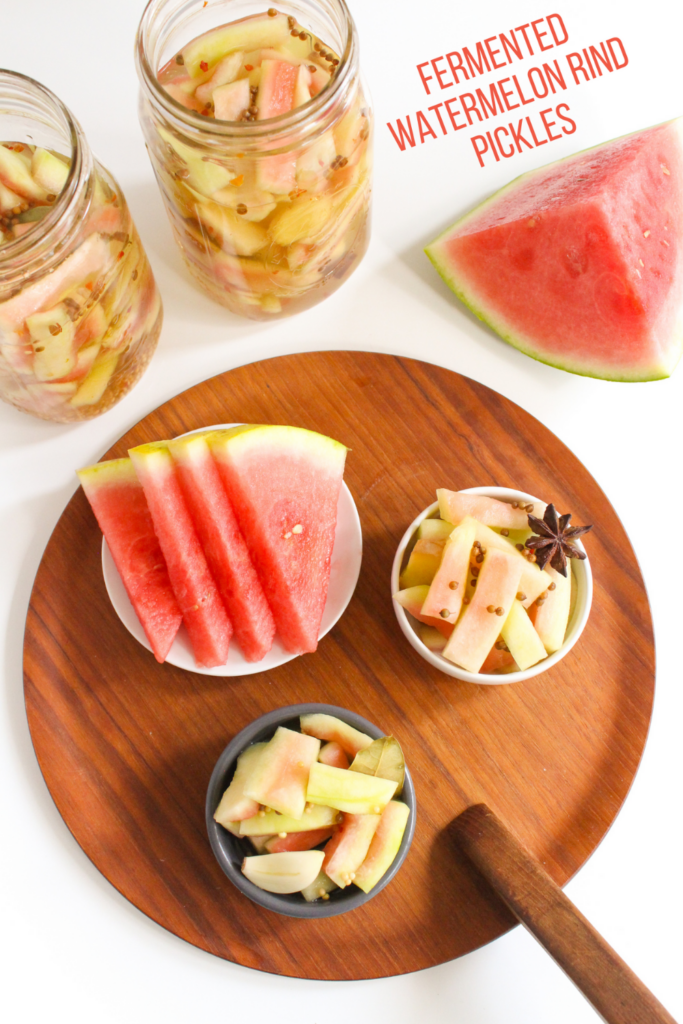 Did you know that watermelon rind is edible? And not only that, it’s quite tasty, too! It’s crisp and hydrating with a mild flavor.

It’s similar to cucumber in texture, and there are tons of great ways to use it – like coleslaw, tzatziki, and gazpacho, for example! And don’t forget watermelon rind salad.

These watermelon rind pickles are salty, briny, sour, crunchy, and a little spicy – the perfect condiment in my eyes.

They’re delicious as a snack or appetizer on their own, or as a topping/accompaniment to all sorts of dishes: tacos, sandwiches, salads, wraps, on a cheese/charcuterie board, etc. They’d also be a perfect addition to your picnic basket this summer!

I love the texture, too; it’s a lot like fermented cucumber, but watermelon rind actually holds its texture a little better when fermented. (Cucumbers tend to get mushy faster.)

At their simplest, these “pickles” (that aren’t actually pickled, as this is a fermentation recipe – more on that later) could be made with just watermelon rind, salt, and water. But I included two options for spice additions – one sweeter, one more savory!

Watermelon rind is wonderfully crunchy and has a great texture for fermenting or pickling.

Not only does it absorb flavors well, but it also stands up well when fermented. It doesn’t get mushy or fall apart as easily as some other fruits/veggies – even cucumbers, which are traditionally used for pickles.

Plus, this is the perfect way to use up leftover watermelon rind after you’ve enjoyed the juicy watermelon flesh. Gotta love a no-waste recipe! 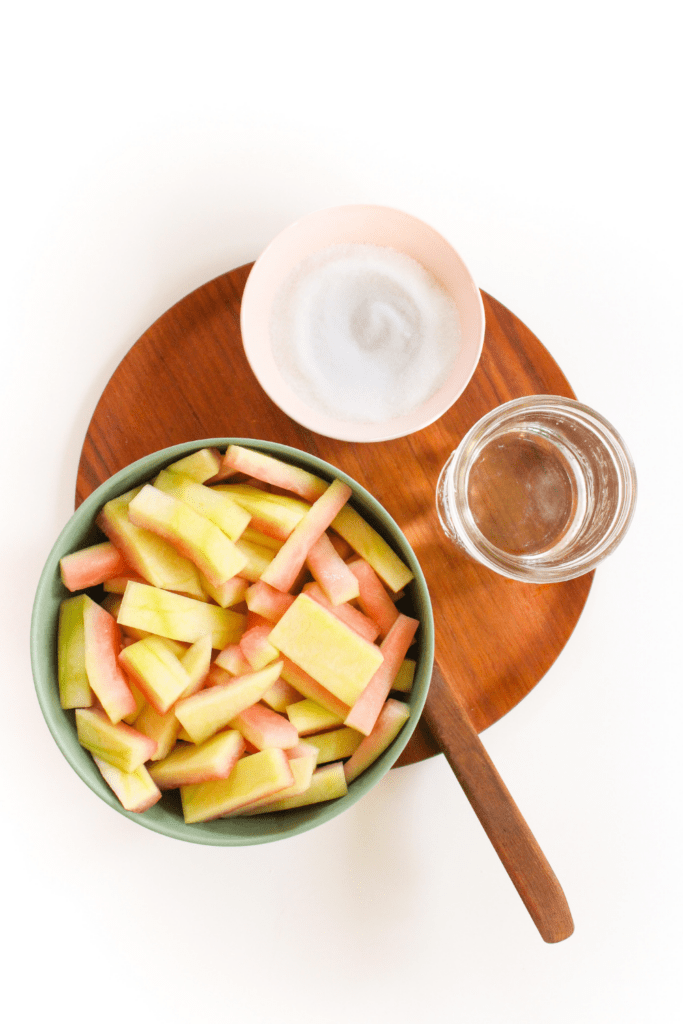 At a basic metabolic level, fermentation is a process where organic substances are broken down by enzymes.

When it comes to food (and watermelon rind) specifically, fermentation breaks down carbohydrates into alcohol or organic acids – which is where that tasty, tangy flavor comes from!

As an example, foods that are commonly lacto-fermented (the method we’re using here) include sauerkraut, kimchi, and sourdough bread. (Things like kombucha, some yogurts, and beer and alcohol use different forms of fermentation, such as yeast.)

I am calling this recipe watermelon rind “pickles,” but that’s just to show what they taste like; they are fermented, not pickled. The main difference between pickling and fermenting is the presence of probiotics (“good” bacteria) with fermentation.

Fermentation uses natural bacteria from the vegetables to achieve the desired flavor, whereas pickling uses an acidic substance (often vinegar) instead. With fermenting, you get that flavor from a natural chemical reaction. You get tons of health benefits from fermented foods, too!

If you’d rather go the pickled route, check out this pickled watermelon rind recipe instead!

In this case, we’re soaking the watermelon rind in a salty brine for a specific amount of time. This eliminates bad bacteria, while allowing “good” bacteria (the kind that are important for gut health) to prosper.

When this occurs, the solution becomes more acidic, furthering the fermentation process. You can read more about how lacto-fermentation works here. 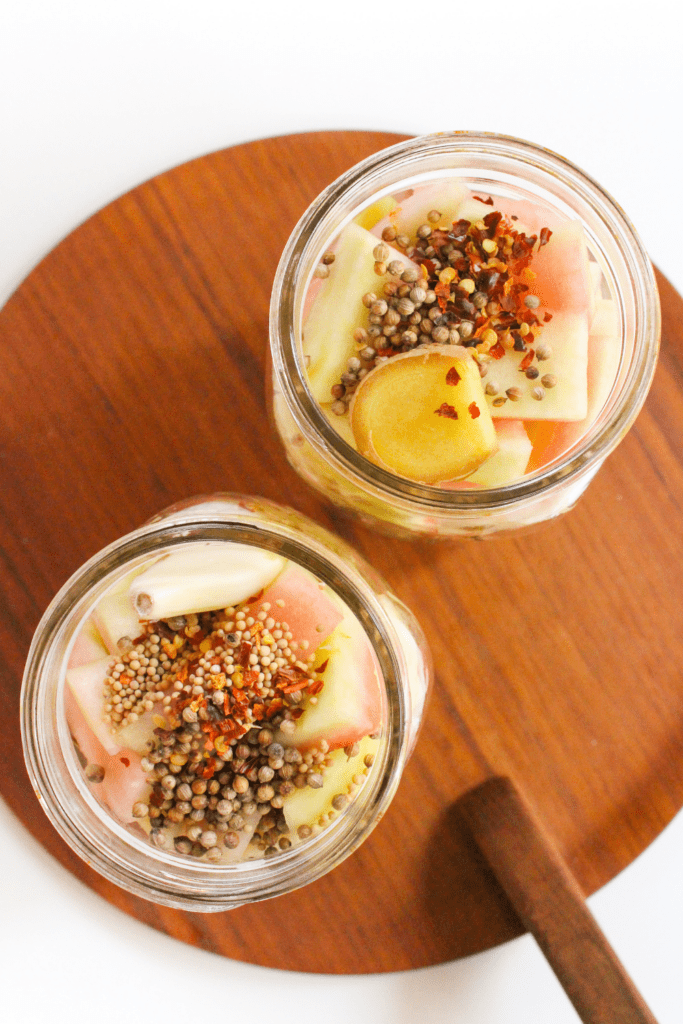 You don’t need anything more than mason jars to make these watermelon rind pickles, but certain items can be useful to make things a bit easier!

I recommend using fermentation lids (which go on top of the jars), because they allow gas to escape the jar without allowing bugs and debris to fall in.

Using a fermentation lid will eliminate the need to remember to open the jars once a day to release built-up gas (and therefore reduce the risk of exploding ferments!). These flat-top ones and ones with water are both great.

Glass weights and springs (they come with the flat-top lids I linked above) are also helpful for keeping your fermenting fruits/veggies submerged in the brine. The glass weights work best for jars that are quart-sized and smaller, while the springs work better for half-gallon jars.

In the quart jars, the springs gradually expand and push the rinds way down to the bottom of the jar rather than just below the top of the brine. It still totally works, but just pushes down with a lot more pressure than the glass weights.

If you’re using a wide-mouth jar for fermenting, you can also drop in a small 4-oz jar as a glass weight. 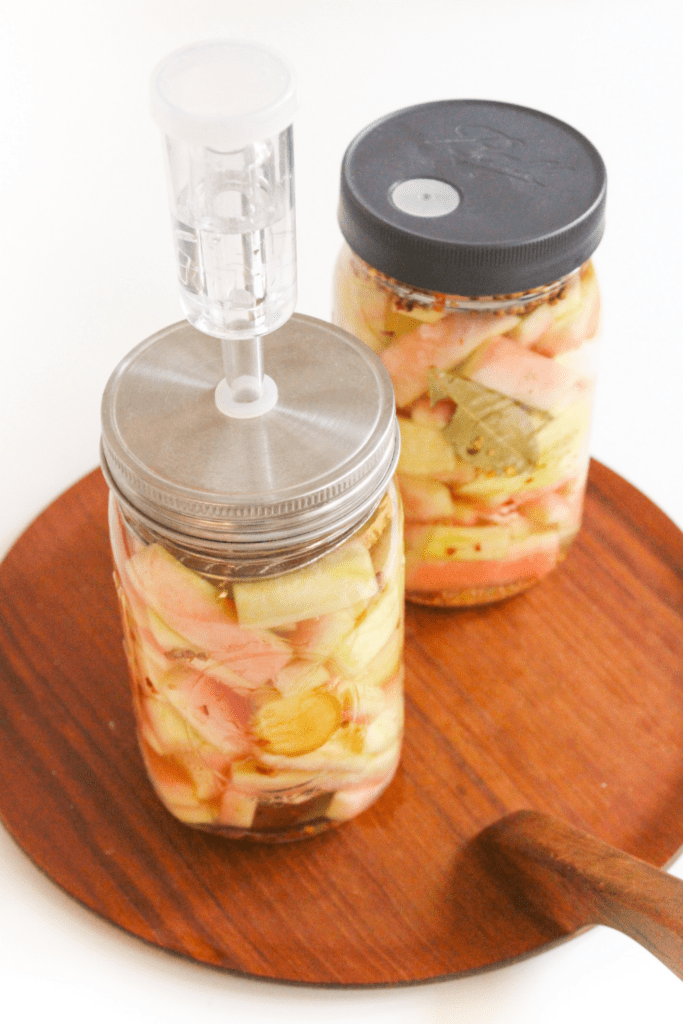 Here are the base ingredients you’ll need here:

If you want to try the sweeter, ginger-spiced version, here are the other ingredients you’ll need: 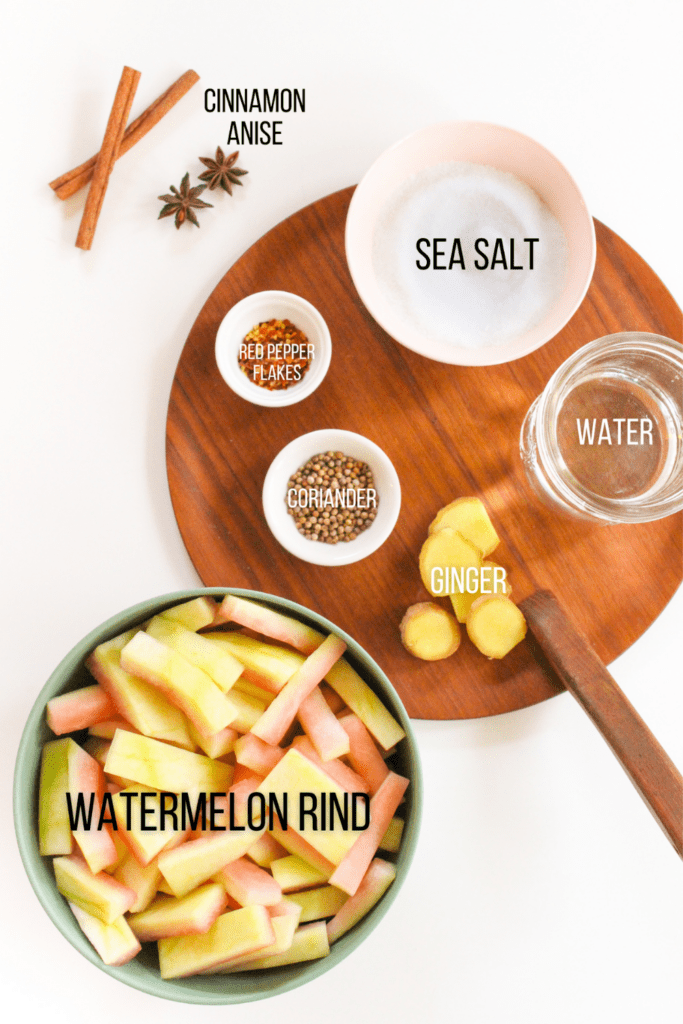 These ginger-spiced pickles have a really nice ginger-anise flavor that I think would go super well with pork or chicken. Imagine a Chinese five-spiced pork chop topped with chopped watermelon rind pickles – yum!

They’re still salty/savory despite having some “sweeter” spices, so they’d work well with sweet-savory applications like a lot of Asian dishes.

And for the savory version, you’ll need: 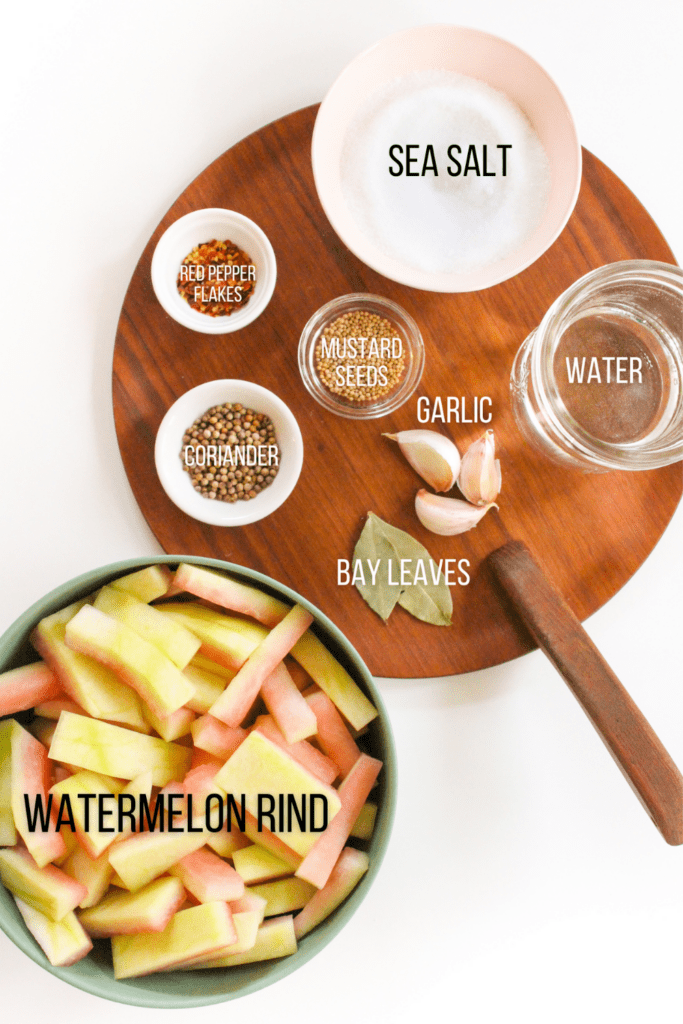 These garlic-spiced pickles taste more like your classic cucumber pickle, thanks to the garlic and mustard seeds. They’d be great on a BBQ plate for summer cookouts!

How to Ferment Watermelon Rinds

Start by removing the flesh and outer green rind from your watermelon rind. Slice it into 1-inch chunks or spears. 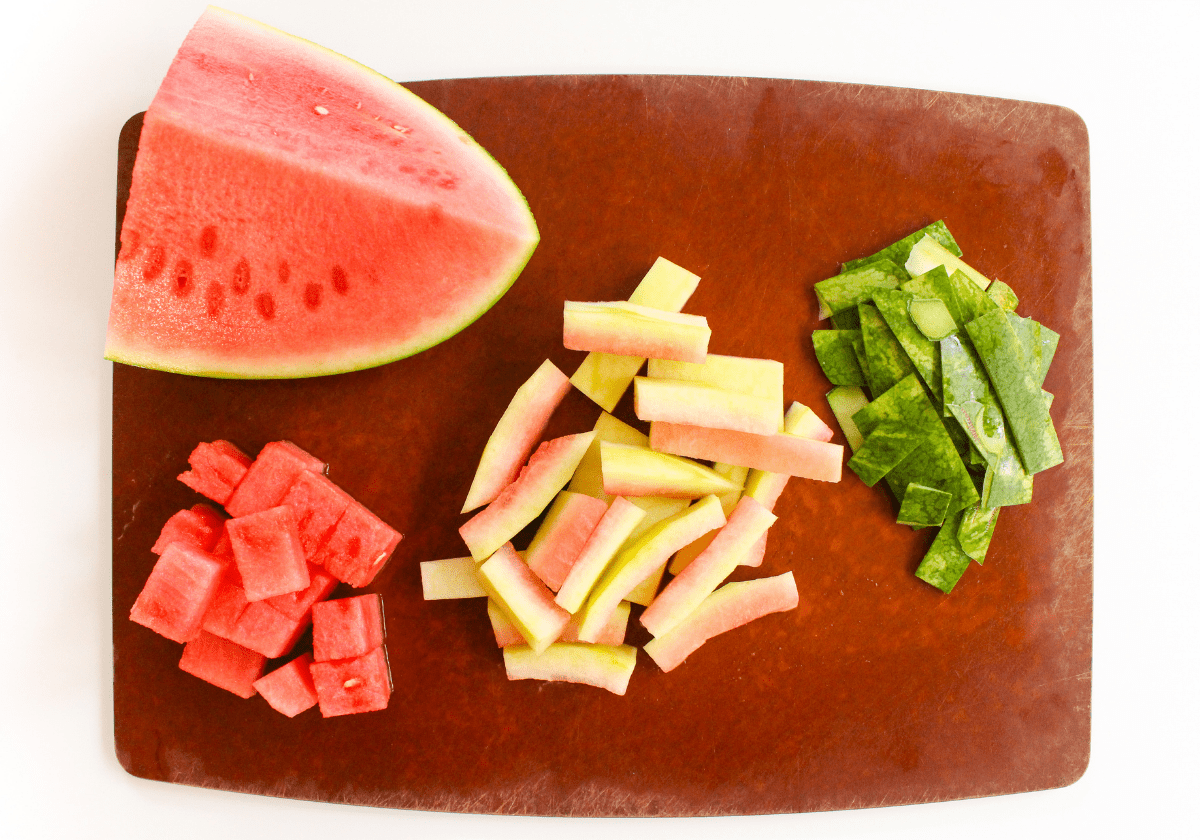 Next, place the rinds in a quart-sized mason jar. Add the spices you’re using at this point (see full recipes below).

Separately, combine the water and (non-iodized) sea salt in a large bowl or jar and whisk or shake to dissolve the salt. This is your brine.

Pour this mixture over the watermelon rind. Be sure to leave a little space at the top of the jar.

If the rind doesn’t stay submerged in the brine, add a spring or fermentation weight to keep it down (see the Fermentation Equipment section above for details). Cover the jar with a mason jar lid or fermentation lid.

Place the jar in a cool, dry place – away from direct sunlight – for 2-4 days. (If you’re using a regular jar lid, be sure to open the lid once a day to allow gas to escape). 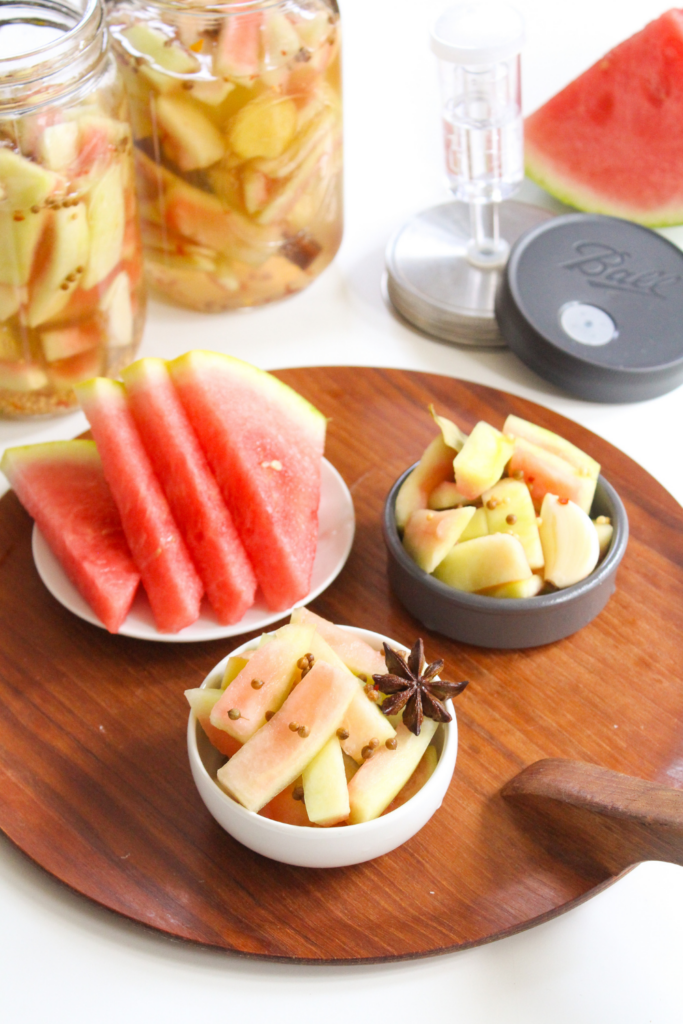 After 2 days, taste the pickles and see if they’re sour/tangy enough for you. If not, leave them fermenting longer.

Once they’re ready, place the jarred rind pickles in the fridge and enjoy! (If using a fermentation lid, switch that out for a regular lid at this point).

They can be stored in the refrigerator for up to 3 months.

I hope you get a chance to try this fermented watermelon rind. The result is super flavorful and will elevate any dish. Enjoy!

Looking for more delicious watermelon rind recipes? Check these out:

For the base recipe: 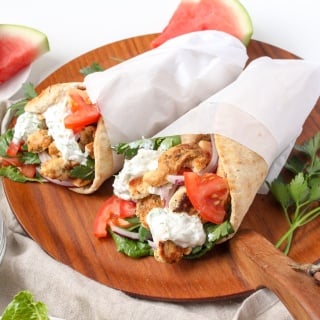 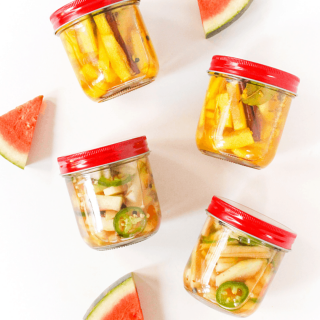 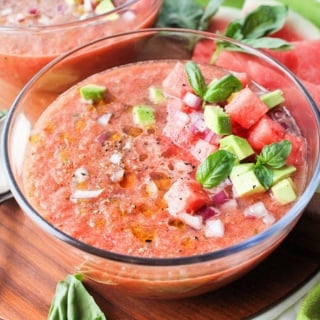