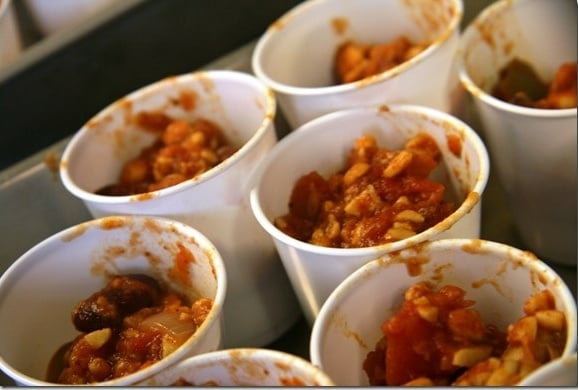 Good morning from rainy North Carolina! It was massively storming last night — woke me up! Oh, well… at least if it’s rainy I won’t be sad I’m stuck inside in class all day 🙂

Speaking of class — last night in Food Science was fun, as always! 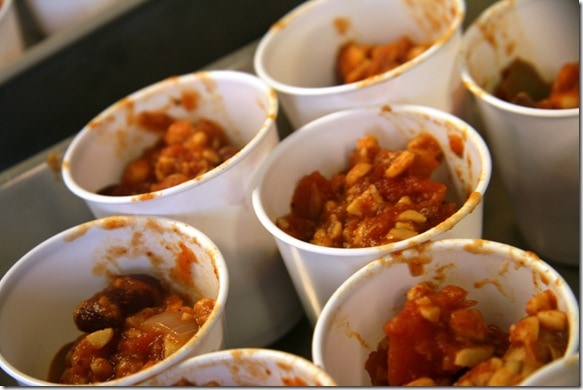 Last night’s adventure was our group project — each four groups had to pick an original recipe, then modify it in some way (including using a soy product) to decrease the calories from fat to less than 30%. It was fun seeing what other groups came up with! 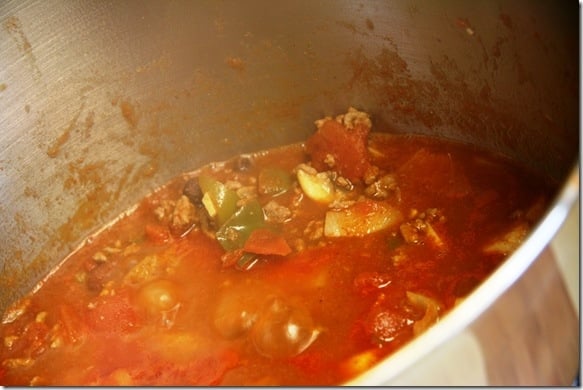 And our modified recipe was Tempeh Chili! Tempeh is mashed soybeans, like tofu, but it has a much heartier texture. We were originally thinking of making tofu chili, but decided the tempeh would create a better texture, more similar to beef. We were right! 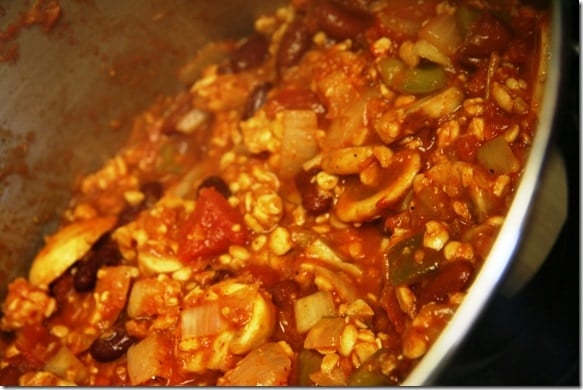 The tempeh chili was delicious — a lot of people liked it better than the beef! To make it, we followed the beef chili recipe exactly, except that we used tempeh instead of beef. No other changes were made. 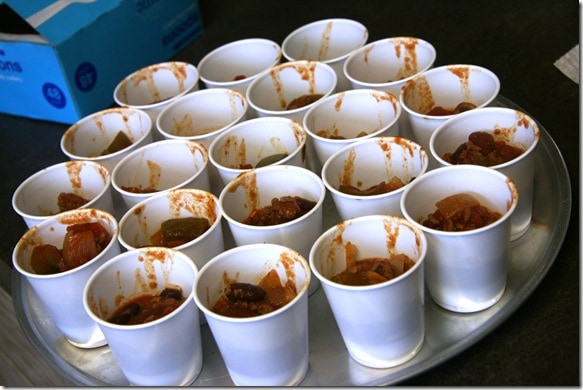 When each group was done with their before and after recipes, we all tasted them! Each group had to create an analysis tool for everyone to use to rate their recipes. We had everyone taste both the beef and the tempeh chili and fill out a sheet rating the taste, texture, flavor, aroma, etc. 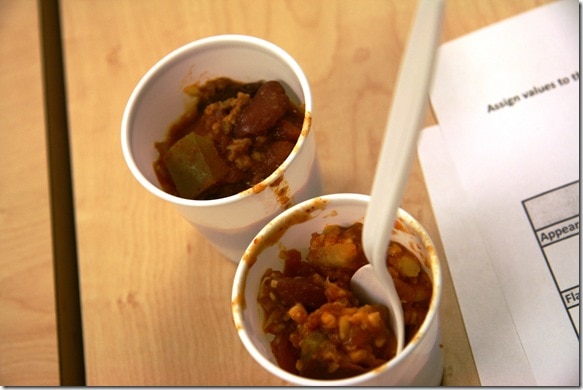 One of the other groups made stuffed peppers — both a Paula Deen recipe and a healthified version with lower fat cheese, fat free sour cream, a soy meat instead of beef, etc. 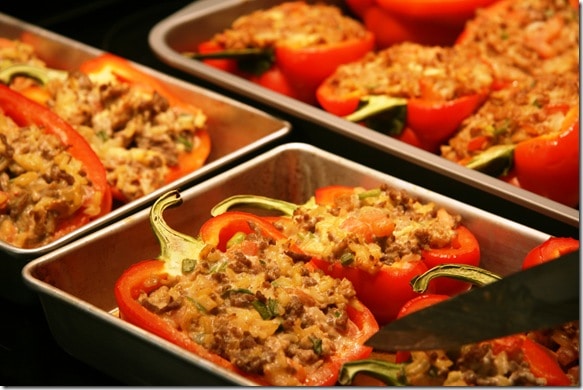 Yum! I liked both of these — but probably the modified a bit better… the original was SO rich! 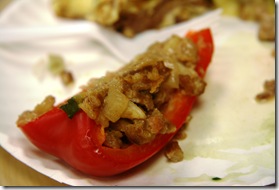 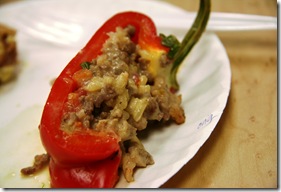 And another group made a sort of egg casserole — the first with lots of full fat cheese, milk, etc., and the second with lower fat cheese, more veggies, cottage cheese, and soy milk. 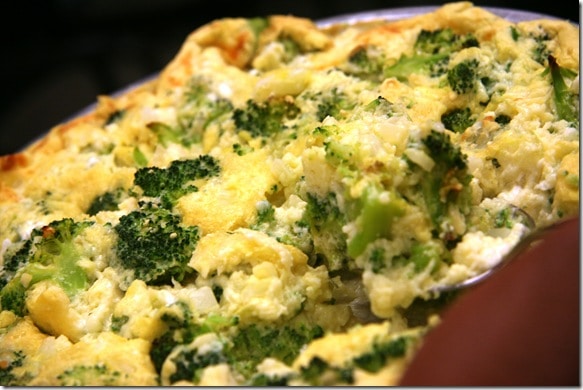 I have to say I liked the original better of this one — their modified recipe using soy milk came out kind of sweet tasting because of the soy… skim milk would have been better!

(Original on left — modified on right) 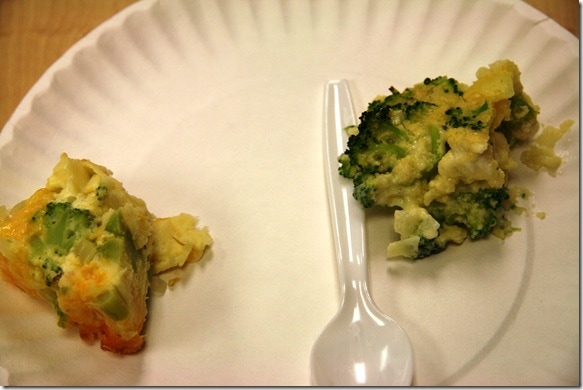 The last group made a chocolate Ã©clair cake! 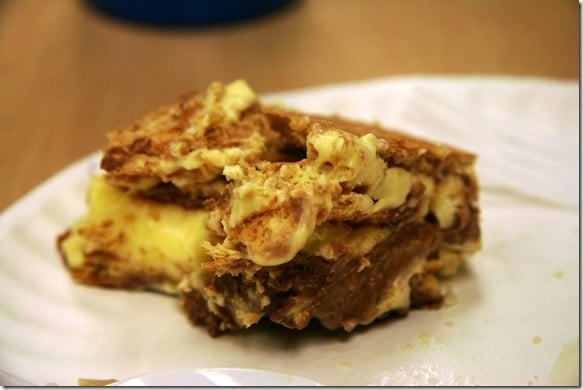 The modified version came out a bit too runny and TOO sweet though, surprisingly — I think because they used banana and soy milk in addition to all the sugar? (modified is in the background) 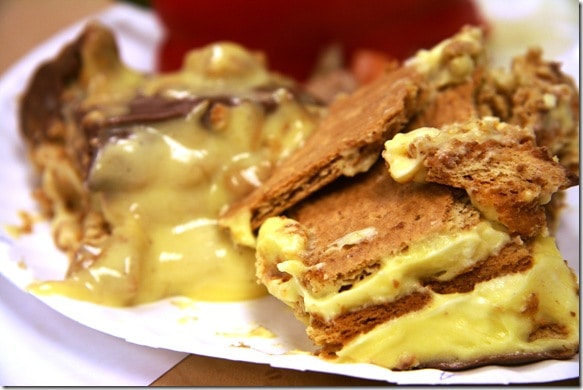 What a fun class! Interesting to see how the changes they made affected the taste, texture, etc.

Have you ever “healthified” a recipe? Did it work? Feel free to share links to your favorite revamped recipes in the comments 🙂 As you all know, I’m a huge fan of healthifying recipes — pretty much everything on my blog is some version of it! I’m particularly proud of my non-calorie bomb or sugar coma but still delicious muffins 🙂

I’m off to school — have a wonderful day! 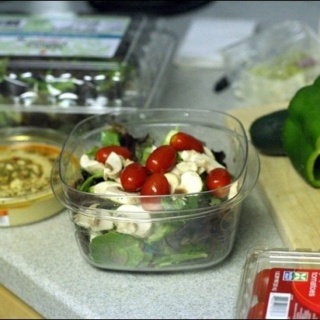 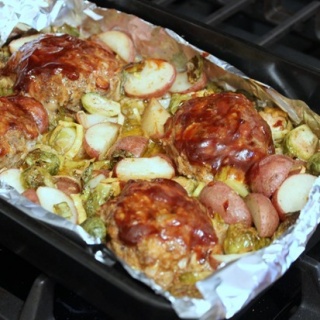 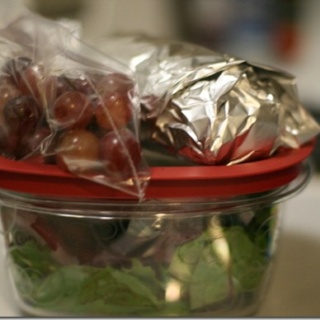 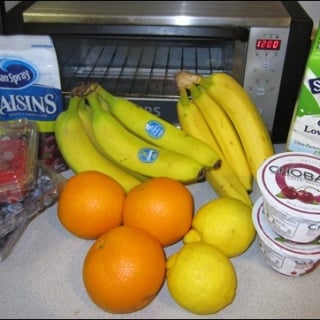 Do You Multitask at Meal Times?