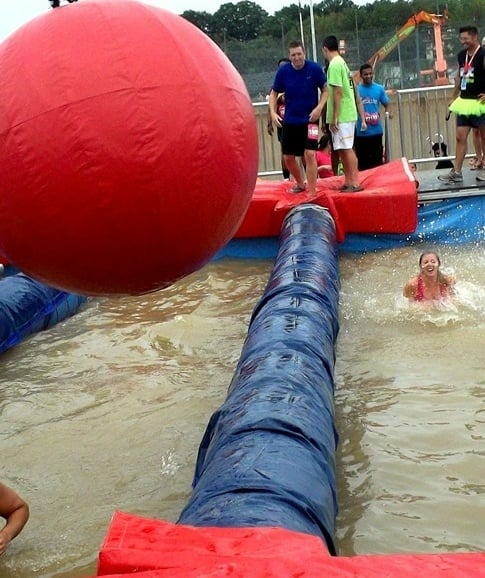 On Saturday morning, Matt and I and a group of friends participated in the fun ROC Race here in DC. What does “ROC” stand for, you ask? Why, “Ridiculous Obstacle Challenge” of course! 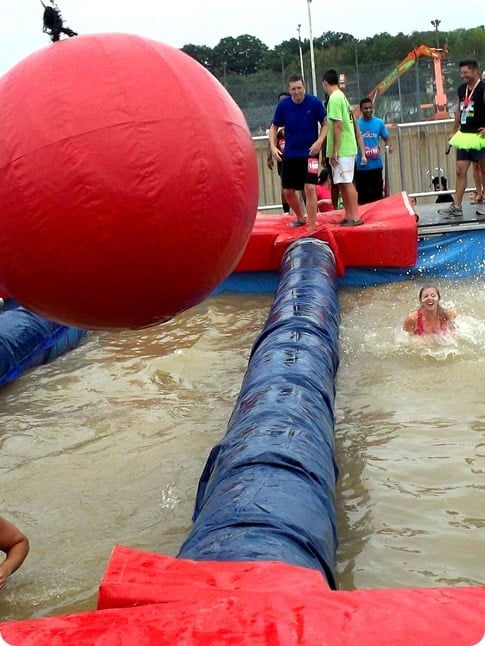 That’s my high school friend Hilary in the water above! 🙂

I think you guys know very well by now that I love ridiculous/wacky races. As you can see on my race recap page, I’ve done quite a few mud runs, a nighttime glow in the dark run, and an overnight relay. So when I heard about the ROC Race coming to DC, I knew I needed in on the fun.

ROC Race was basically a combination of a mud run obstacle race (but minus the mud), a water park, and a kid’s birthday party. Sound awesome? It was. I mean, check out this “finish line” – it was a giant inflatable water slide! 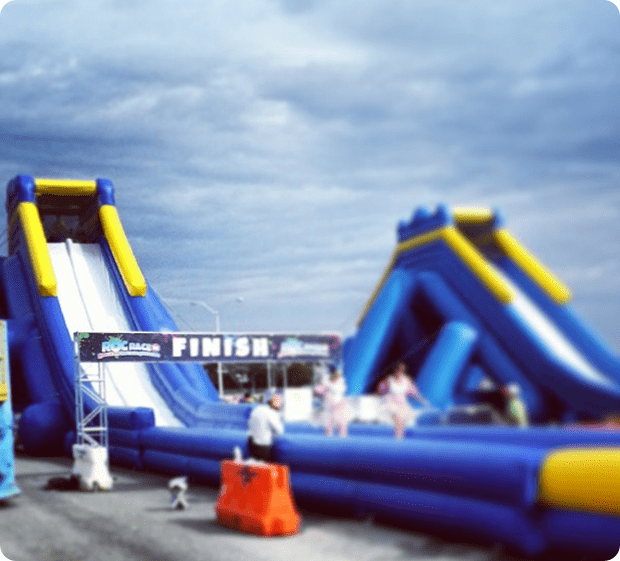 The race had starting times beginning in the early morning and going through late afternoon; you signed up for either morning or afternoon and then a wave time was assigned to you later. We ended up with 10:30 a.m. Perfect – not too early, not too late.

The starting area was a bit of a hot mess – there was a HUGE line and no one seemed to be regulating who was supposed to start when. We were probably waiting in line at least 45 minutes before we started, which was kind of lame. Hopefully next time they will section off areas for each wave start time so it’s better organized. 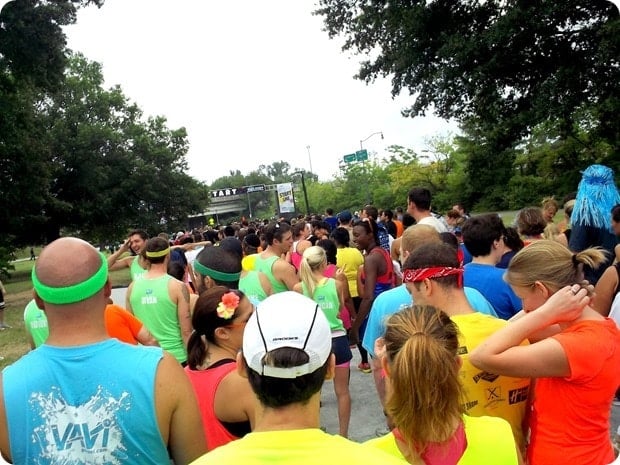 We finally made it to the front around 11. Let’s do this! 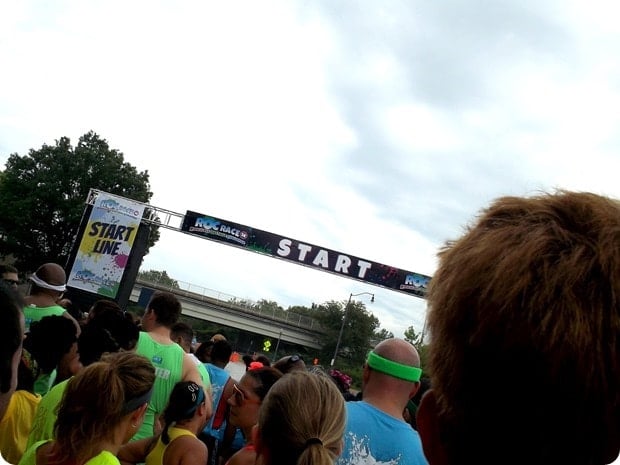 The ROC Race is a 5k, and in DC, it was set up in a big paved area next to RFK Stadium. This meant that the running section was all big loops around the area on the pavement, which I wasn’t thrilled about. If this race had had a better organized start and was on a trail/in the woods or somewhere more interesting like most obstacle races, it would have been perfect. But that’s all I have to complain about, because the rest of the race was awesome! 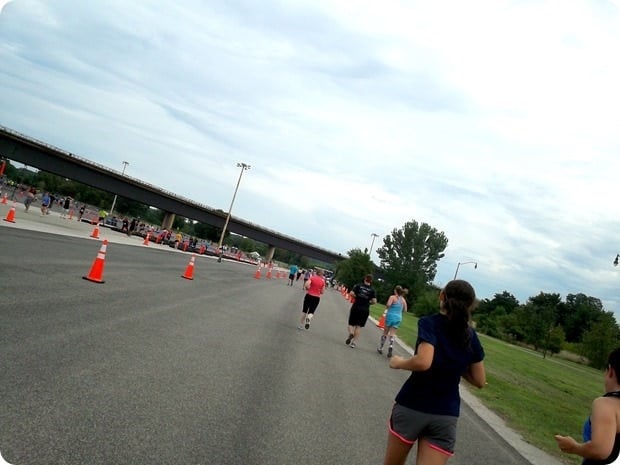 The first obstacle was some standard small walls to climb over. Next up was some fun monkey bars! 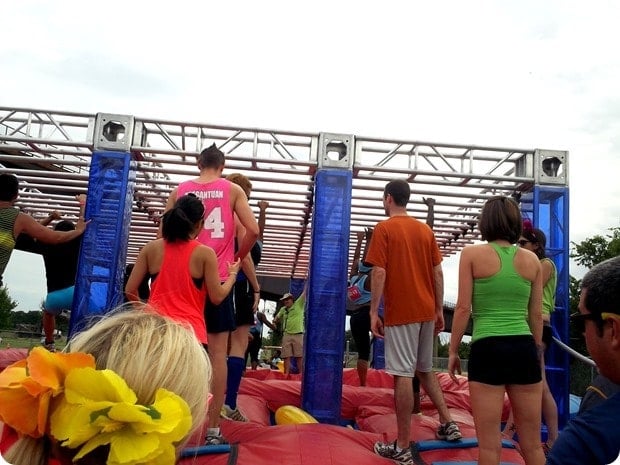 I was so proud of myself – I made it all the way across without falling! I haven’t been able to do that on monkey bars in years. Thanks, CrossFit. 😉 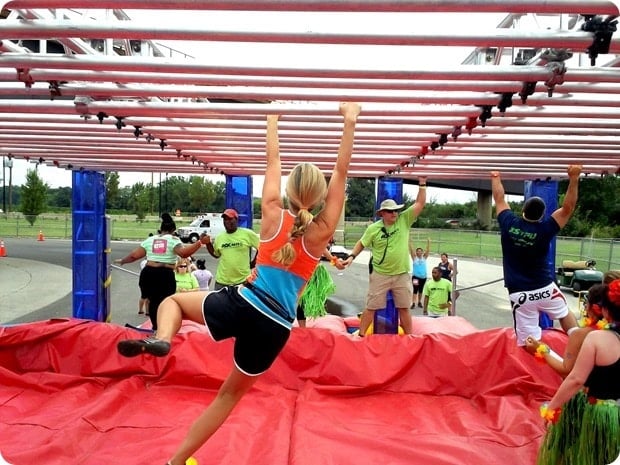 Soon after we had a tightrope walk: 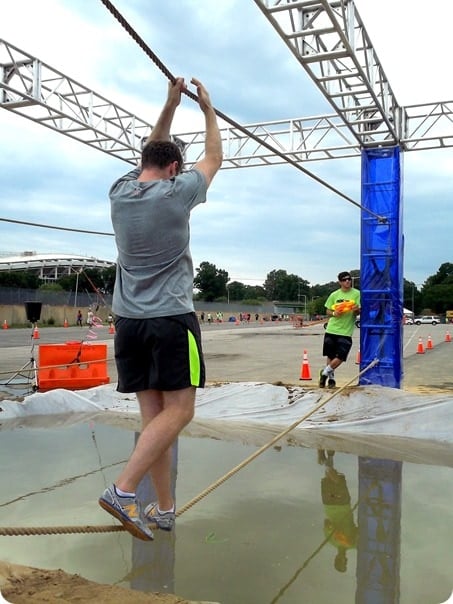 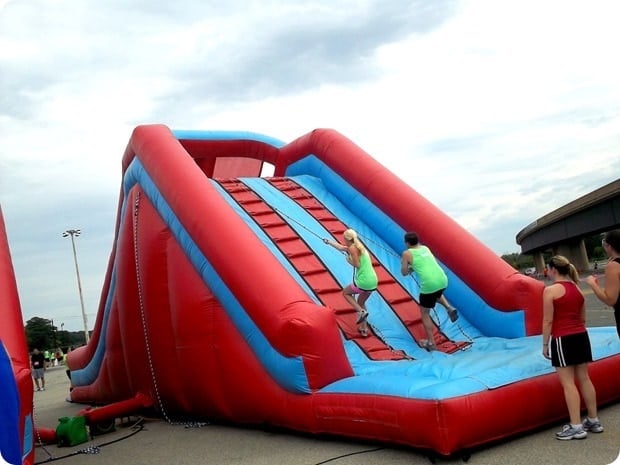 And some tires to hop through:

A huge inflatable bouncy obstacle to hop through (loved this!): 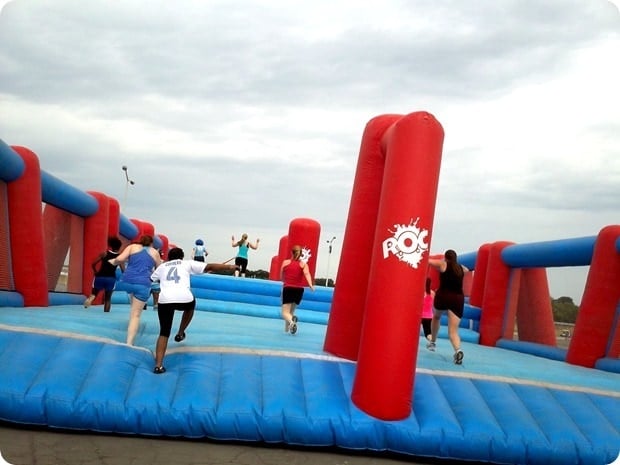 And then came the real fun. 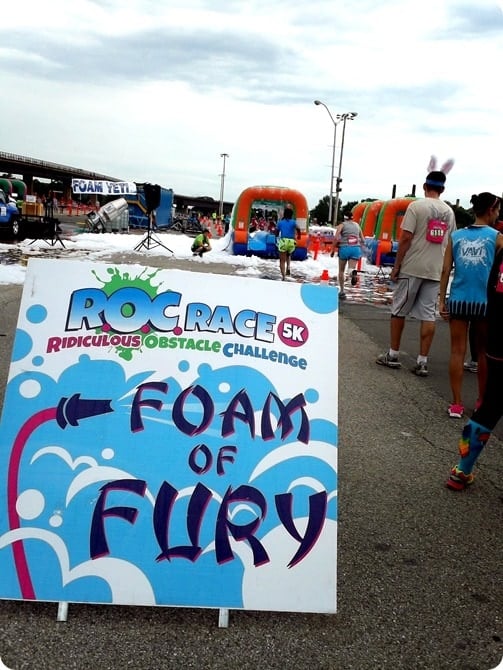 FOAM OF FURY!!!! This was so fun – you sprinted towards it and then dove headfirst into one side of the inflatable thing, which had soapy foam and water being sprayed into it. If you were fast enough you could fly through to the other side and fall out into a little pool of water! Matt made it all the way through, I made it about 3/4 of the way before I lost momentum. 🙂 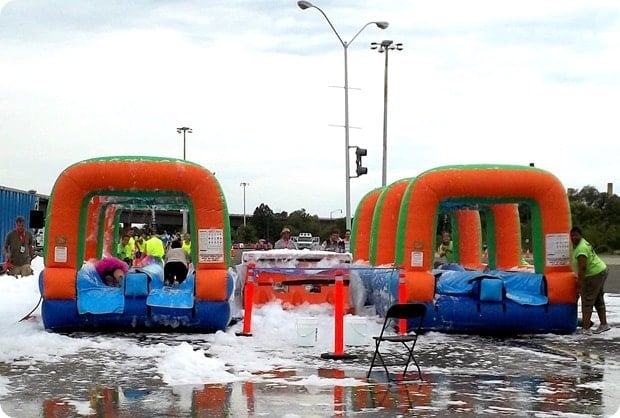 After the foam, we tackled a rope swing:

And then came another awesome water slide type obstacle – again, you ran forward and launched yourself into this! I made it all the way to the end this time! 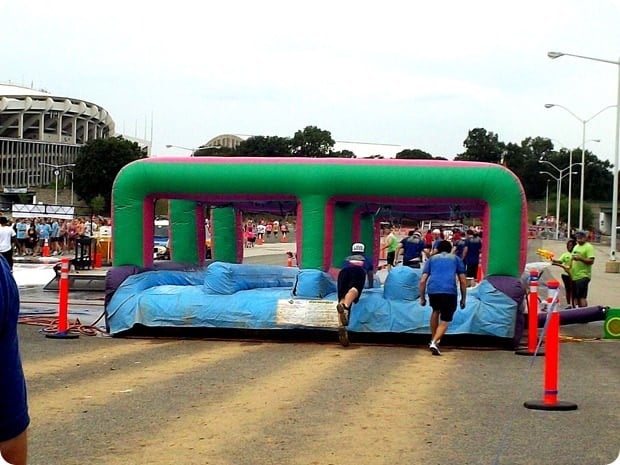 Next came what can only be described as the greatest obstacle ever. 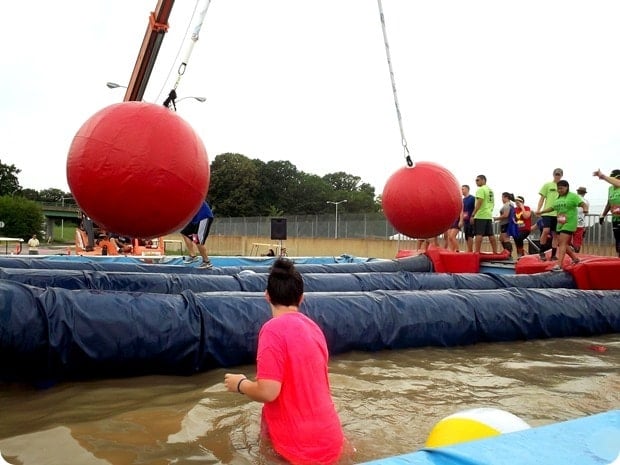 The challenge was to run across these slippery bridges without falling in, but these was a twist: there were two huge red balls rotating around trying to knock you off. 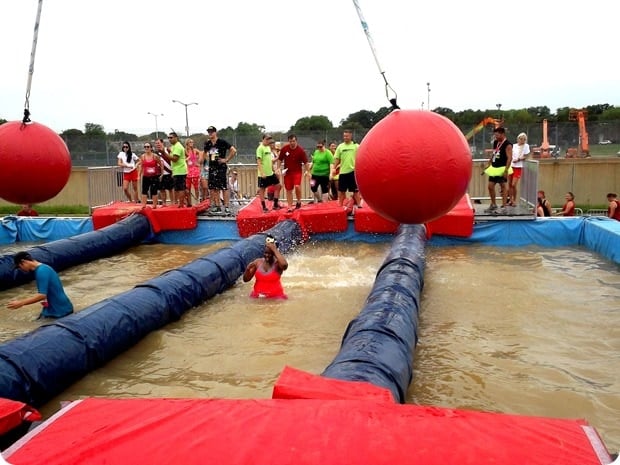 There was quite a long line for this obstacle, but it was so hilarious to watch everyone attempt to make it across! There were some really epic wipeouts – the audience (aka everyone waiting for their turn) got really into it and would cheer people on and burst into applause for those who actually made it. The most applause went to those who were either able to dive under one of the balls or push it away without falling off. 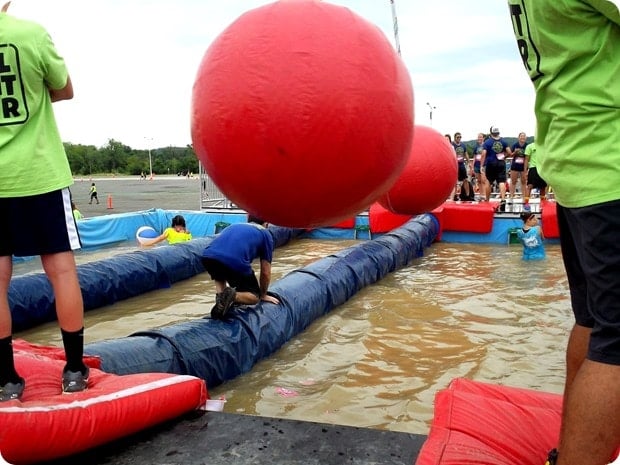 Matt was a pro – he made it across without falling in! Me, not so much. 😉 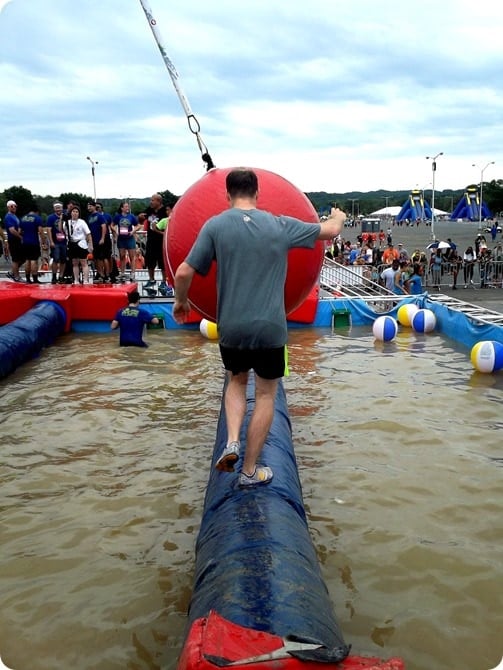 I want this obstacle in our backyard – what a blast! Matt and I hung out watching the action while we waited for our friends to come through, and then all of us headed towards the finish together.

Ready for the sliding finale! 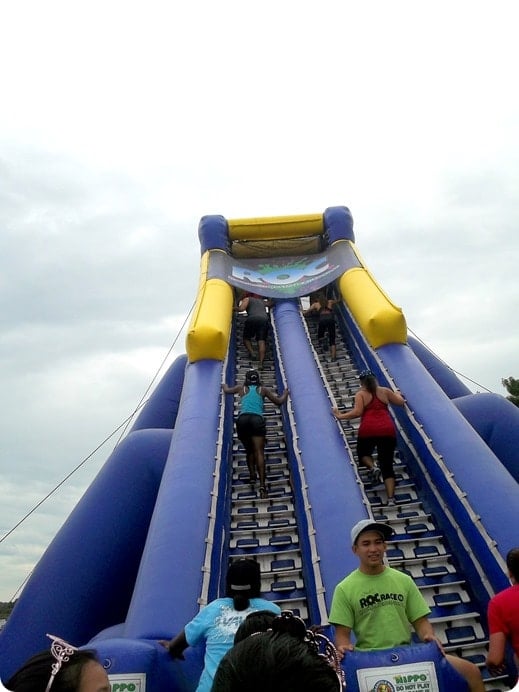 I snagged this picture from the top just before sliding down. It was a serious water slide – pretty high and steep! I loved it. 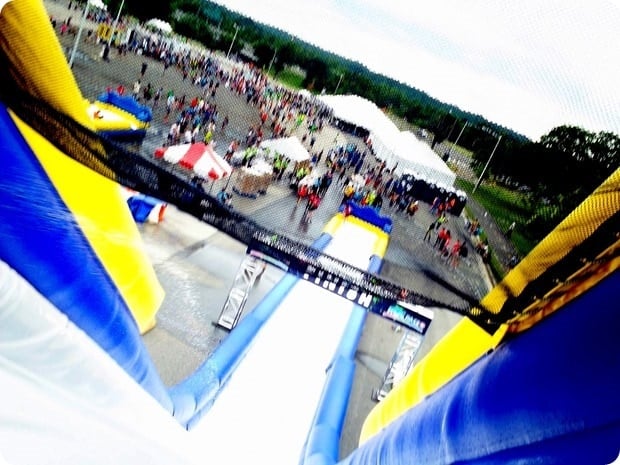 What a fun way to spend a morning. We all had a blast! 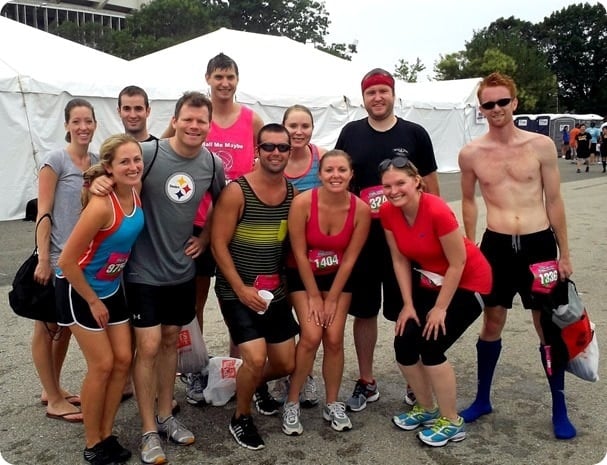 I hope more races start incorporating water park-esque obstacles – that was so much fun. A big thank you to ROC Race for offering me and Matt free bibs in exchange for sharing our thoughts on the race!

I’ll be back tomorrow to share a recap of the rest of our weekend adventures. 🙂 I hope you all had a great weekend, too! 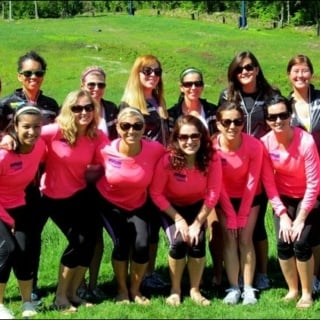 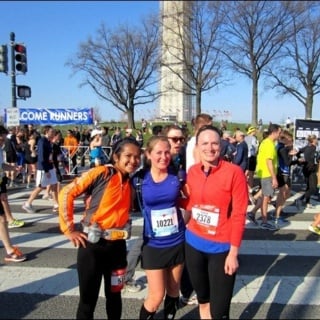 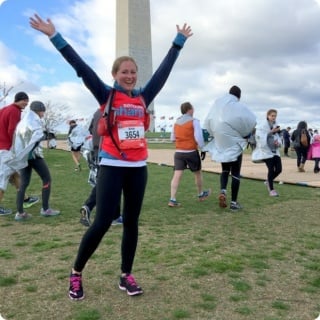 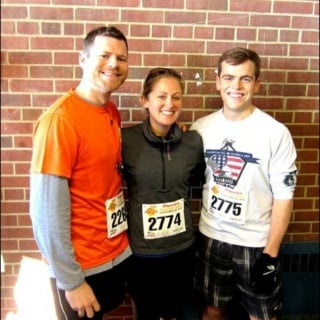