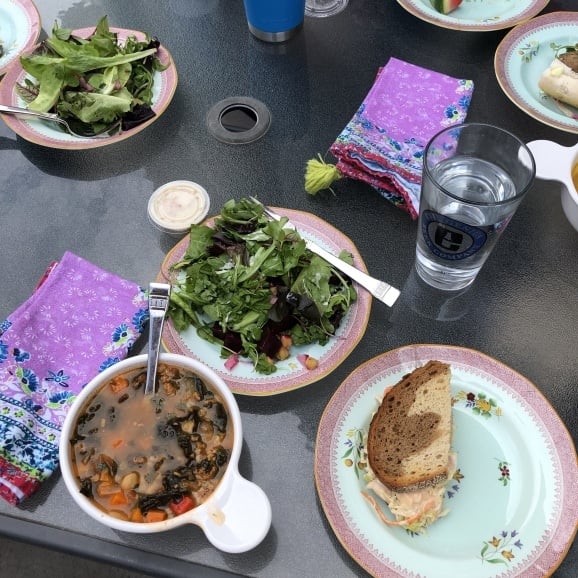 We are back in DC after a fun weekend in Philly!

Matt, Riese, and I were in Philadelphia visiting one of my best friends from college, Turner, and her husband and two little ones – a boy around Riese’s age and a girl who is almost 4.

We drove up on Saturday morning and arrived in time for an early lunch – soup, salads, and sandwiches we picked up from a really cute spot called Good Spoon Soupery that’s a short walk from their house in Fishtown area of Philadelphia. 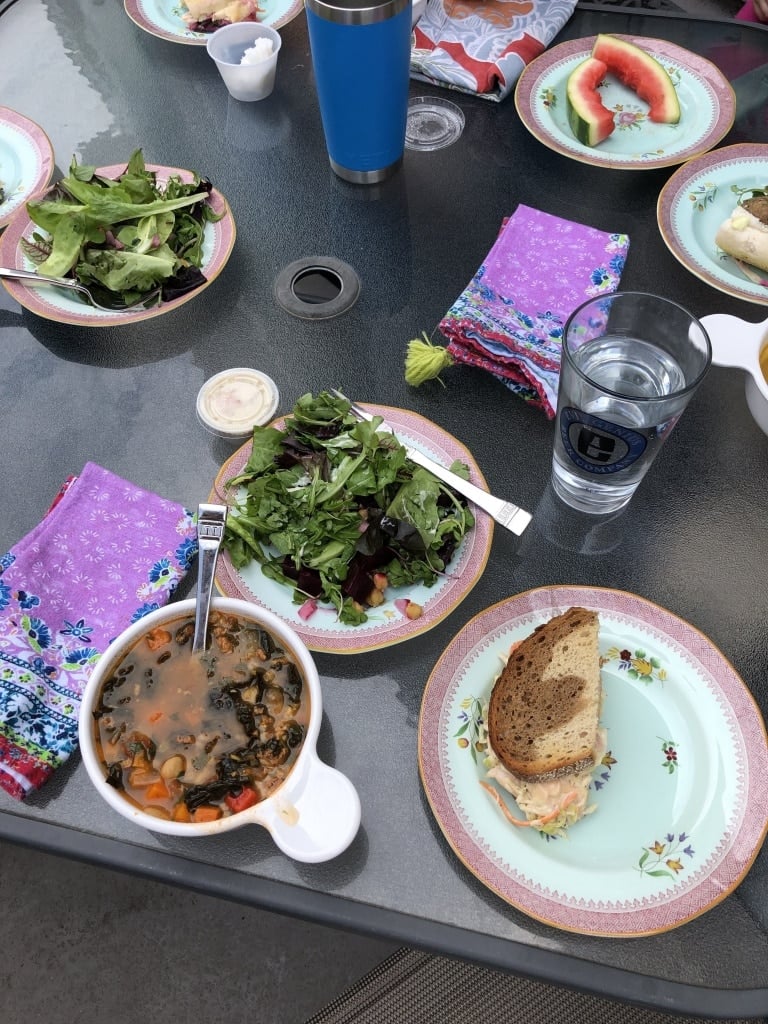 Matt and I shared “the Rachel”, which was roasted turkey, melted Swiss cheese, coleslaw, and Russian dressing on marble rye bread. The bread was especially delicious! We also shared a salad (local greens with roasted beets, chickpeas, pickled onion and honey tahini vinaigrette) and soup (chorizo, farro, chickpea, and kale).

The weather was gorgeous so after their son Ezra woke up from his nap (Riese fell asleep in the car 20 minutes before we arrived and then refused to go back down after lunch – oh well), we all walked to a nearby playground.

Our little adventurer loved it! 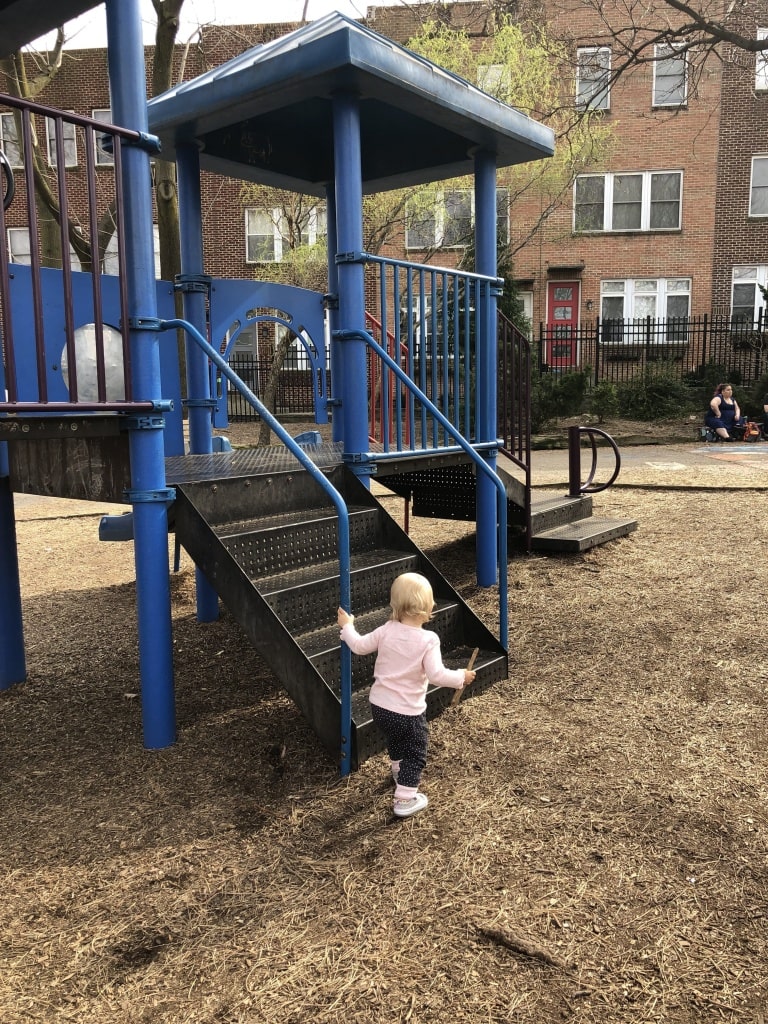 We headed back to the house and got the kids some dinner, and Matt and I got Riese to bed before the babysitter Turner and Will hired arrived – parent’s night out, woo!! 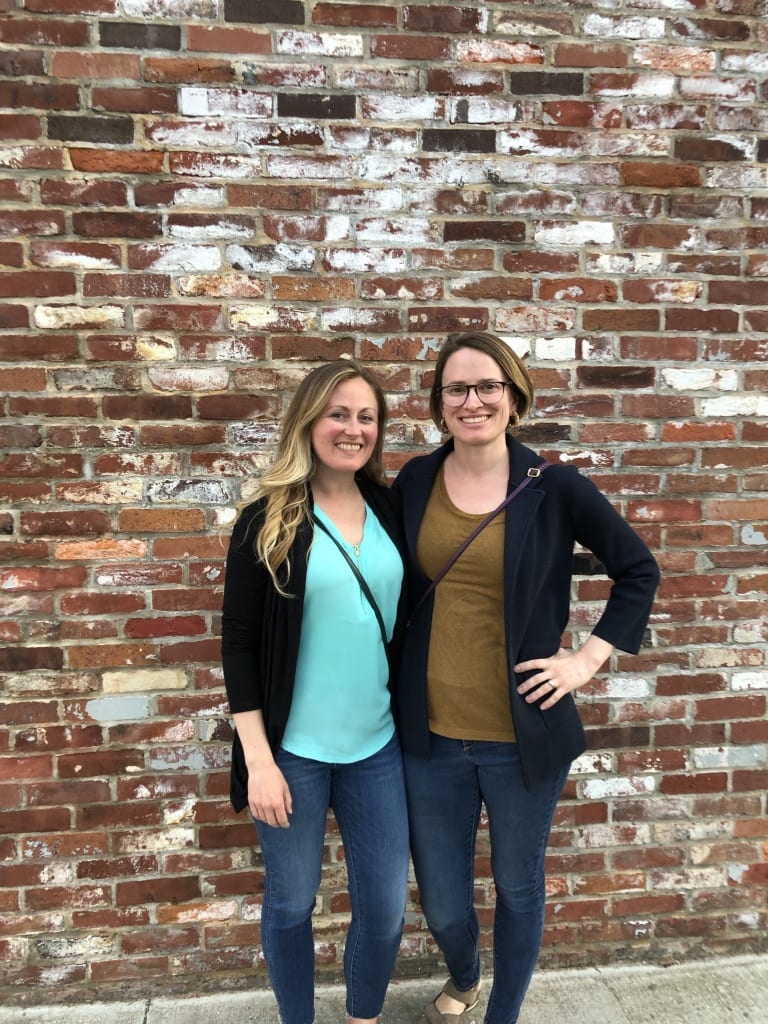 We had a little time before our dinner reservation so we walked over to a cool spot called Fete Sau for a drink first. Since it was so nice out it was PACKED – they had a big outdoor area and fun cocktails, too. It also smelled like amazing BBQ… will have to come back sometime for dinner!

I got the “What’s Up Fishtown?” which was aviation gin, carrot juice, and ginger. Fun combo! 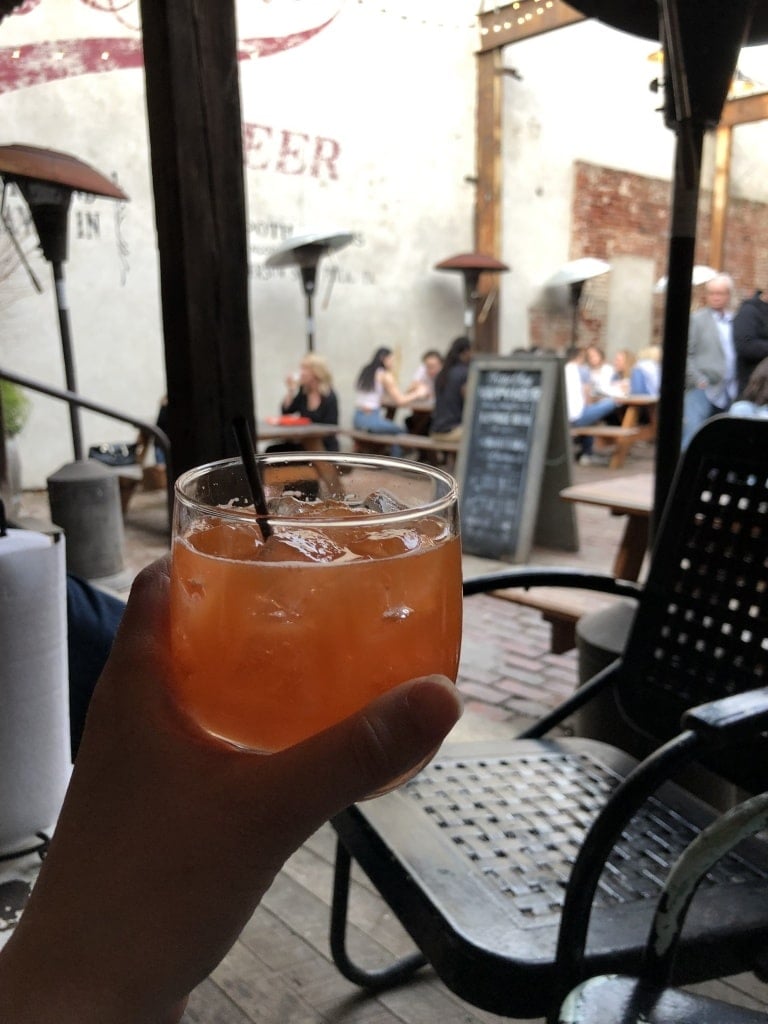 For dinner, we walked over to a spot called Kensington Quarters.

I started with a sparkling red, which is my new favorite thing and my answer to when I want bubbles but also red wine. 😉 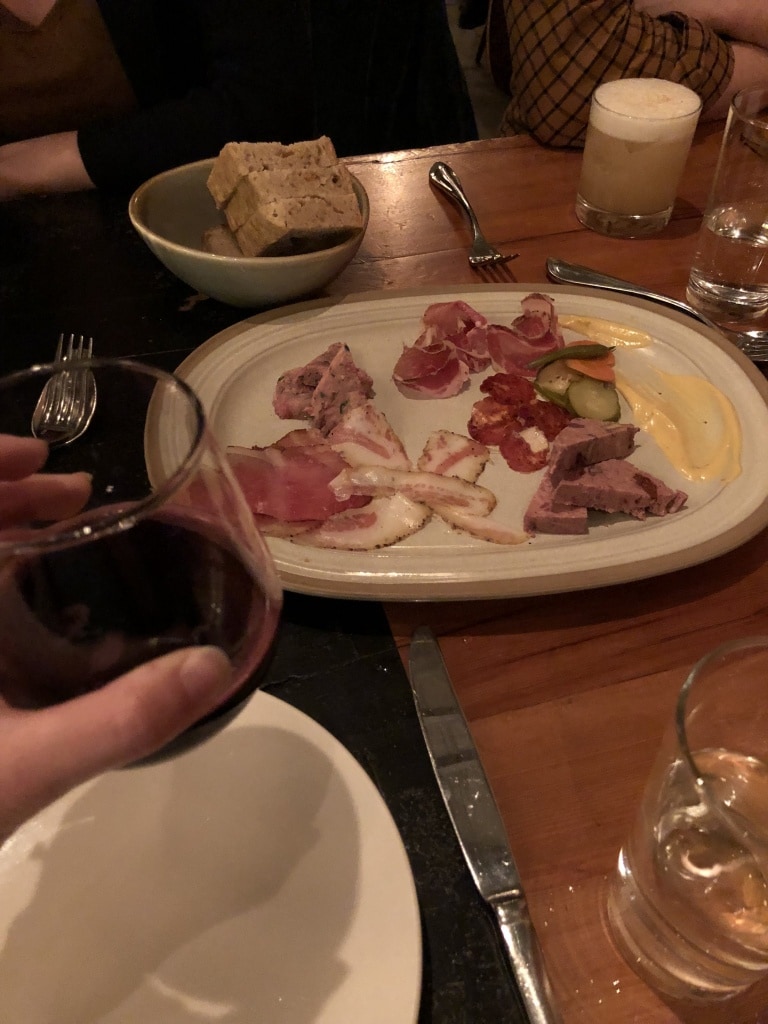 Enjoyed with some charcuterie and really good bread – soft but with a hard salty crust, mmmm.

All of us decided to try their sampler option where they just bring out a bunch of their most popular dishes for us all to share – that way we didn’t have to decide what to order, and we could each try a bit of everything! 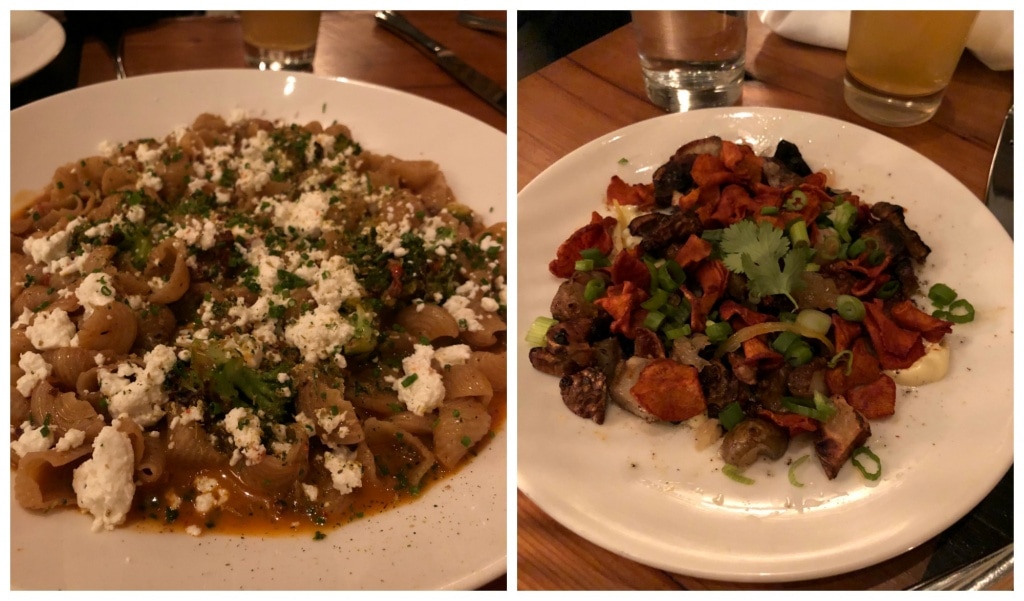 Everything was REALLY good. Although by the time this massive platter of meat and more sides came out I was already full from the earlier dishes – rookie mistake! 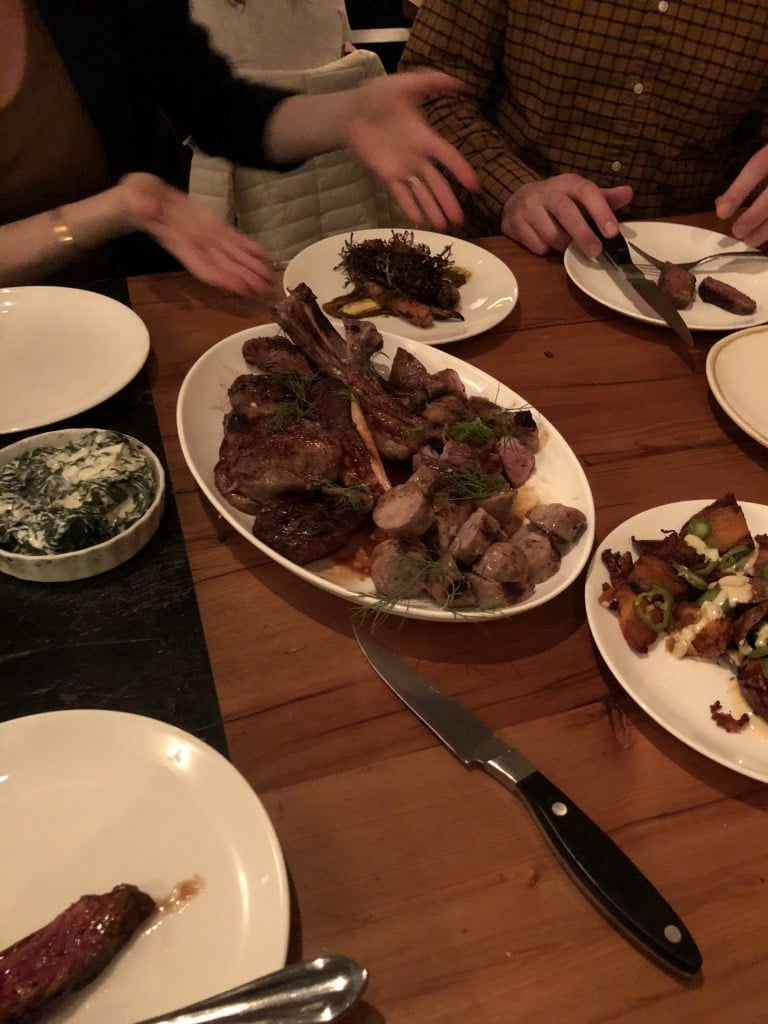 For the last bit of the evening, we walked over to a mutual friend’s place who had a fun backyard fire pit going. It was the perfect night for it and a nice way to close out the night!

Riese was up earlier than usual Sunday morning and we were all a bit sluggish from the big night out, but we pulled it together because we had fun workout plans!

First up: Turner and I headed out for a run date! (Once we were back, Turner’s husband Will and Matt went off to a boot camp class Will likes.) 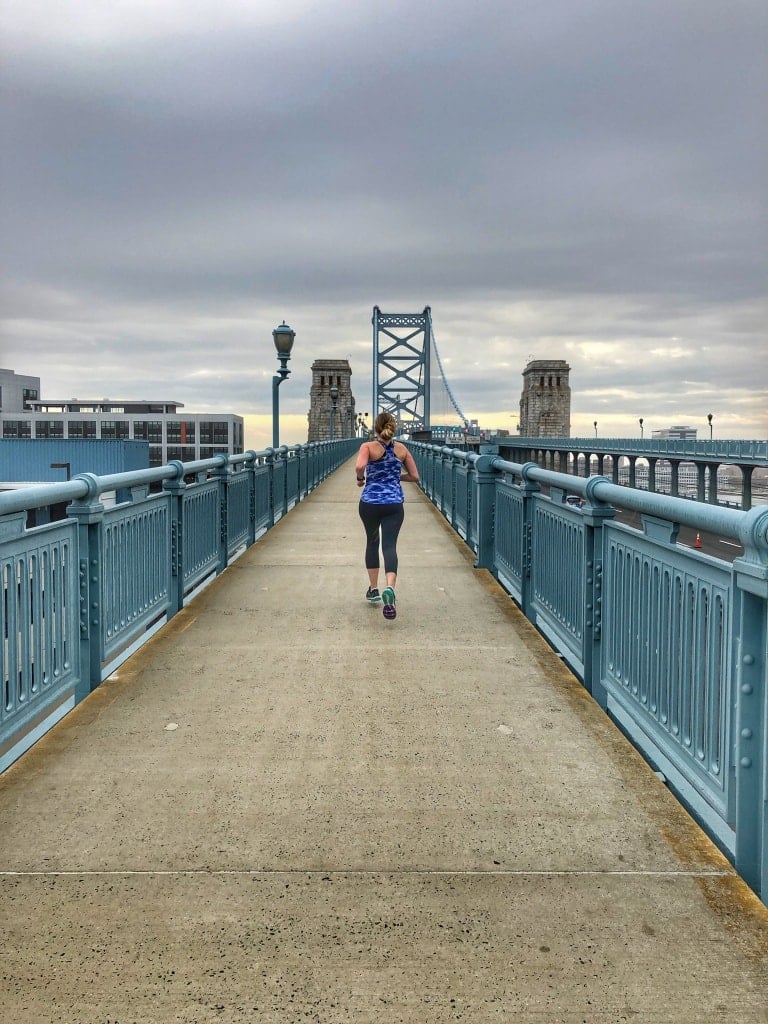 Turner and I ran around the city a bit and then a little ways up the Benjamin Franklin Bridge to check out the views. 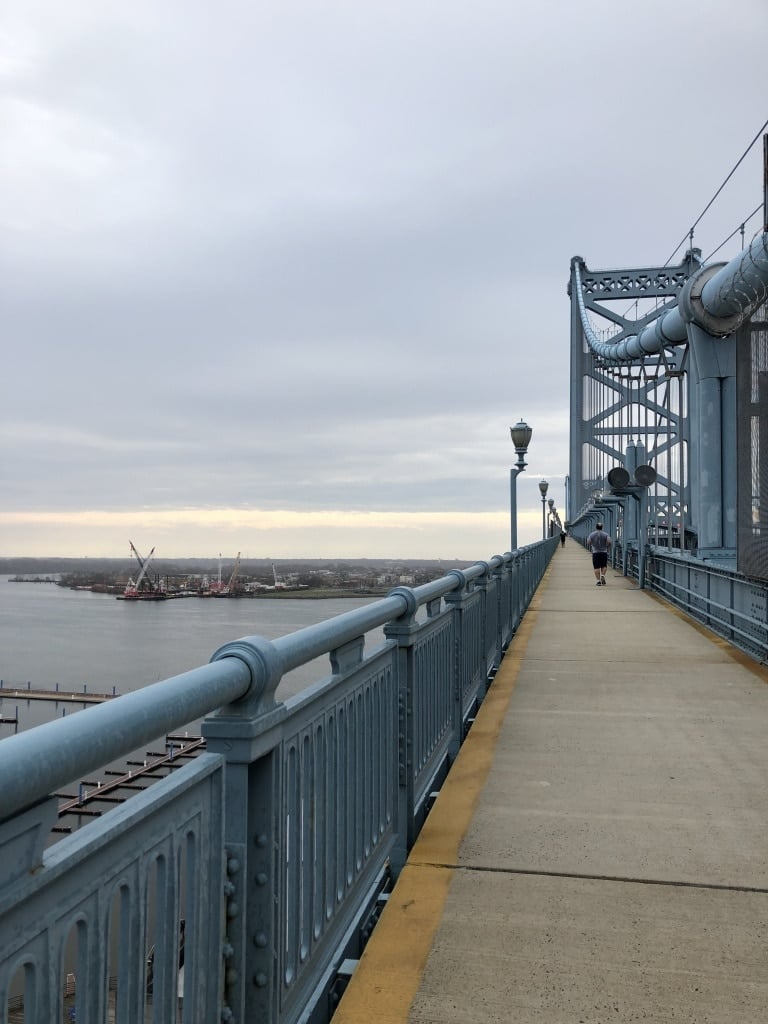 My stomach was not feeling super awesome on this run, but it was still fun to get out and explore a bit and have some one-on-one time with Turner. 🙂 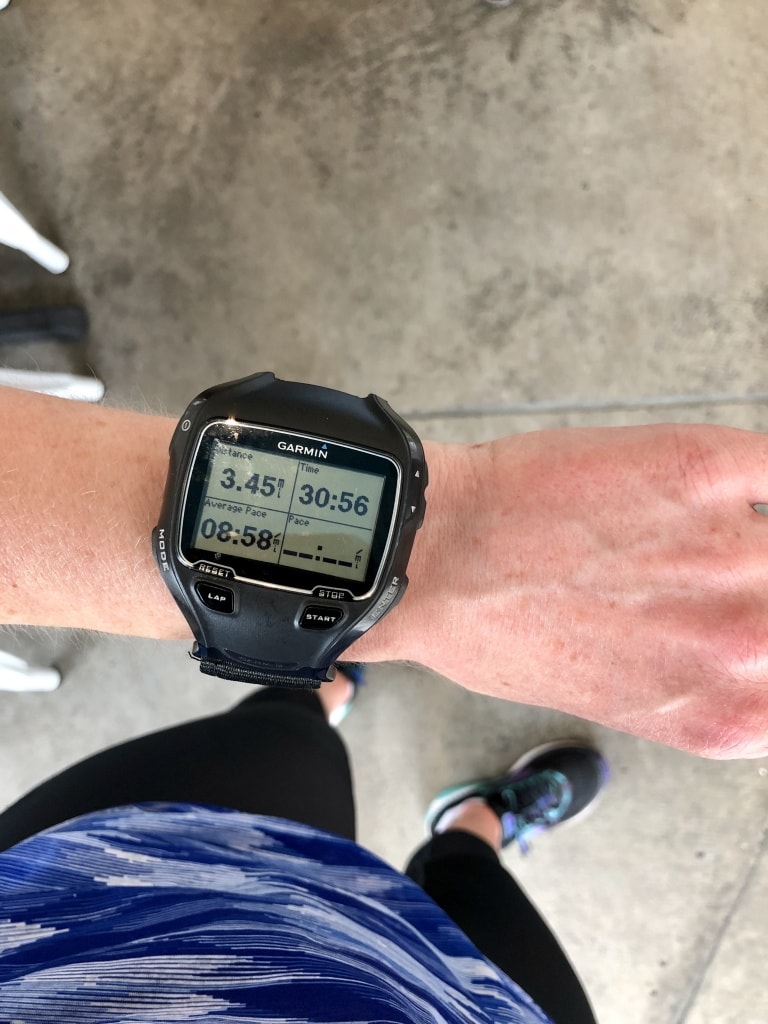 We finished our run at Cake Life near to pick up some quiches and coffee for everyone to enjoy back at the house. Their baked goods looked so good! 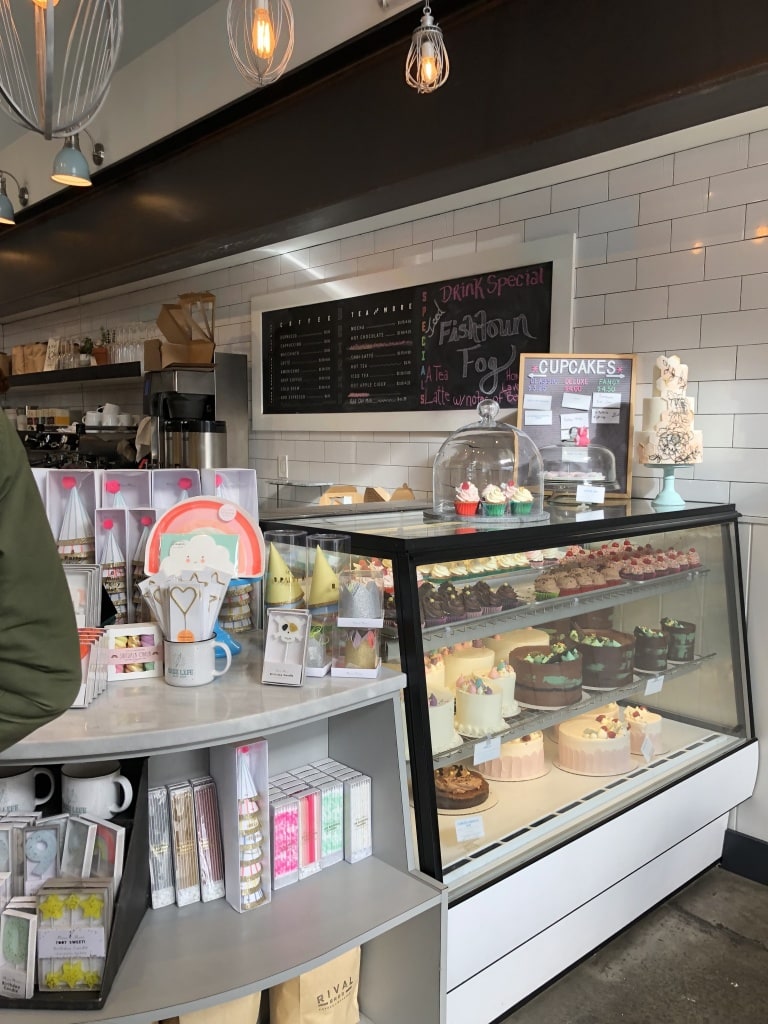 And the quiche was amazing too – one had white cheddar, kale, caramelized onion, and bacon, and the other had pickled onion, parmesan, kale, and tomato. 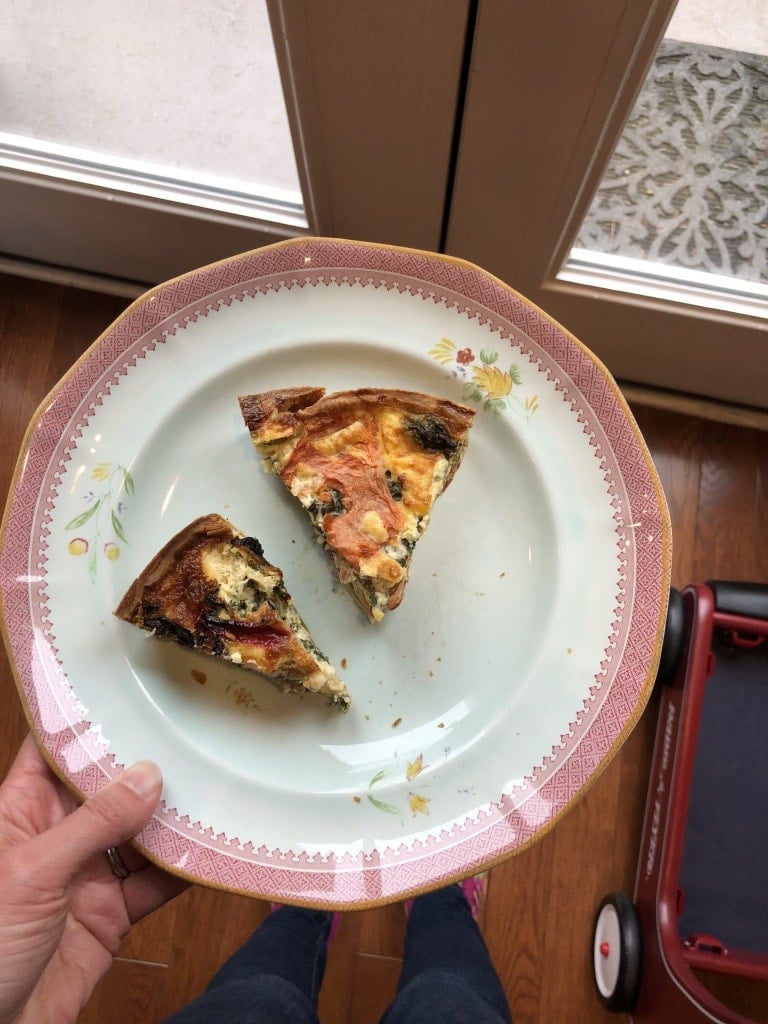 For the return trip, we were smarter and left at nap time (around noon) and Riese fell asleep pretty much immediately. She woke up about an hour into the drive but was in relatively good spirits the rest of the way.

We got home in time to spend the afternoon at the playground with Riese, and then for dinner we wanted something easy but nourishing so I grabbed some leftover Moroccan Chicken Stew (<- recipe) from the freezer. 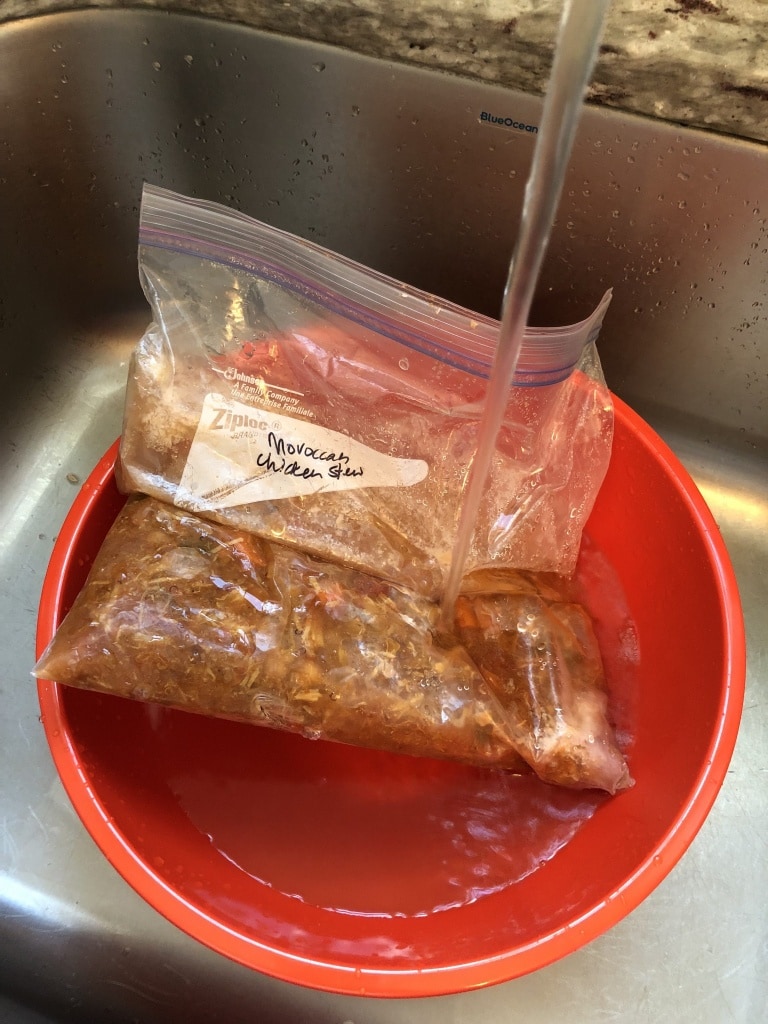 We let it defrost in a bowl of warm water while we were at the park, then once we were back and Riese was down I snacked on some veggies while getting it reheated. 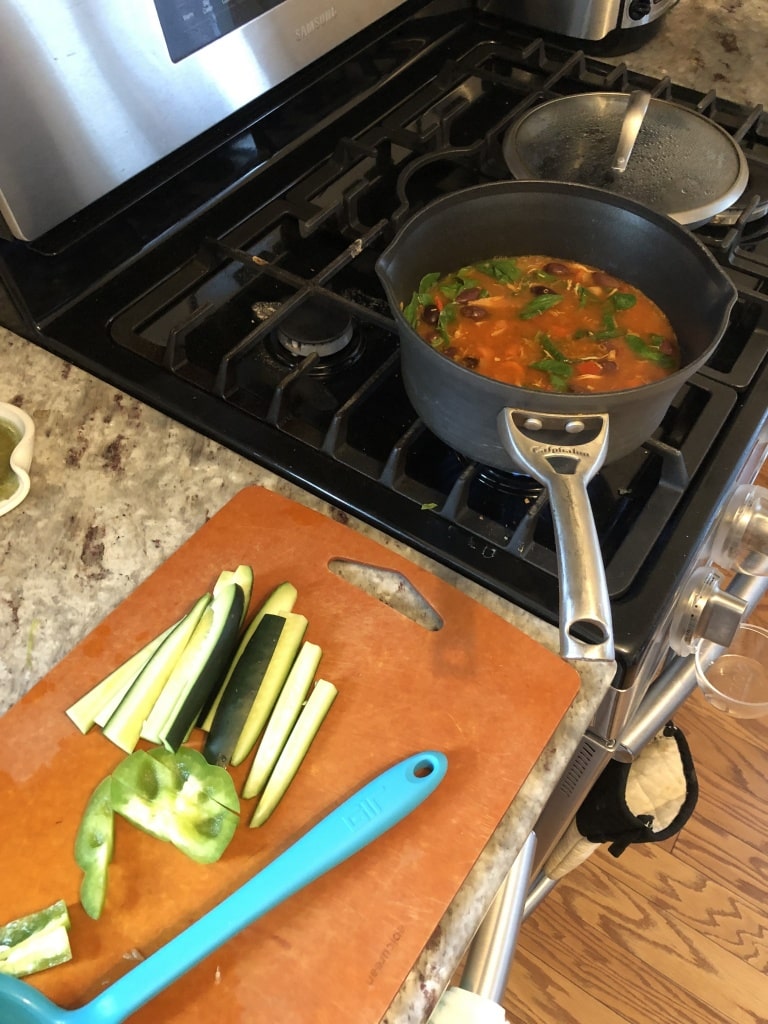 Yum! I added a little water so it was more soup-y which was what I was craving. Plus some fresh spinach that wilted down nicely, and some olives!

Hit the spot. I also had some crackers and cheese which are not pictured. 🙂 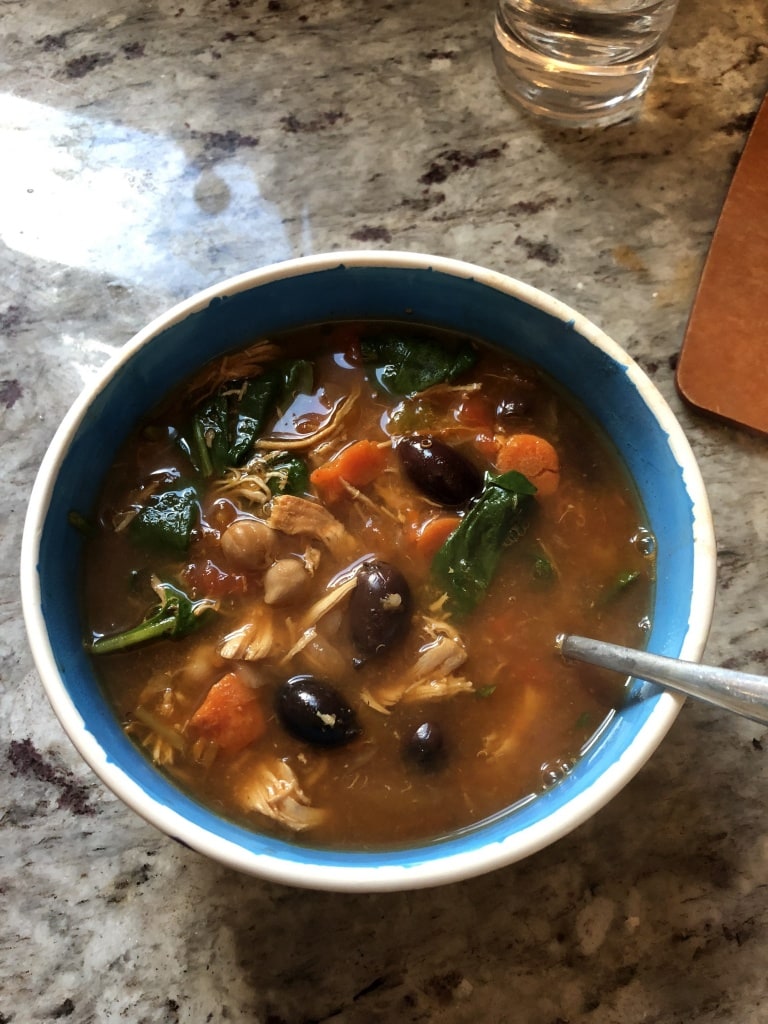 We spent the rest of the night getting some work done so we had a head start on the week.

And that’s a wrap!

Such a fun weekend with good friends. Thanks again for having us, Turner and Will! Until next time. 🙂 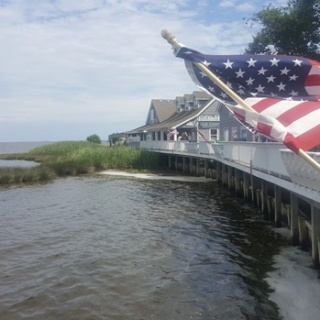 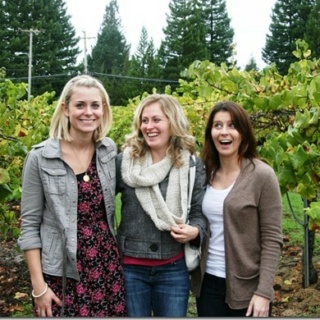 Wine Tasting the Day Away 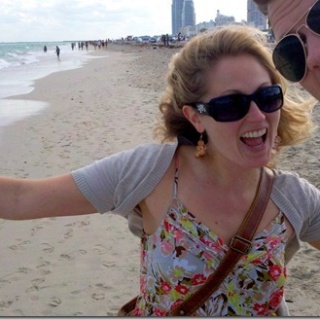 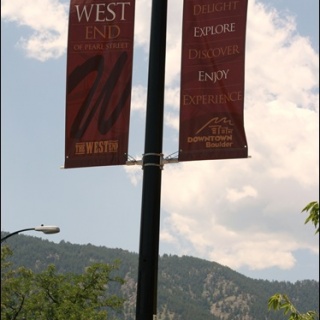