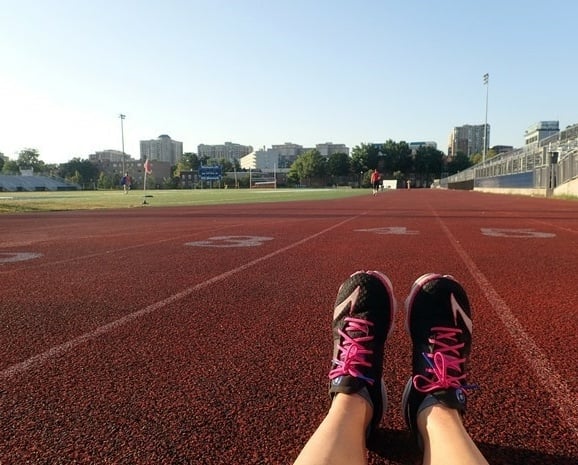 Hey guys! Summer is back once again – it’s been a hot week over here! Come on fall, where are you…?!

Tuesday morning wasn’t quite as hot yet, though – which was good because I was out at the track! 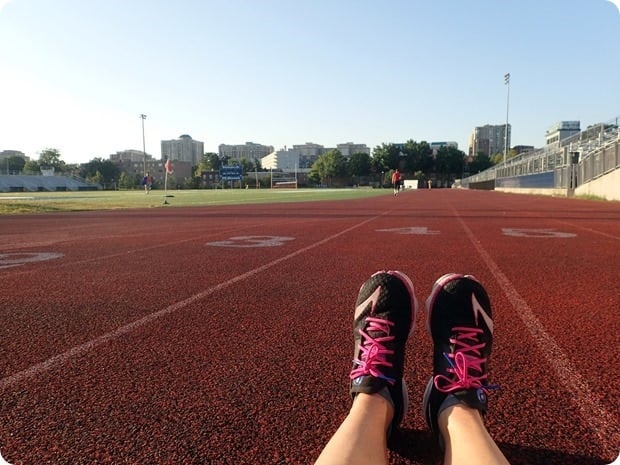 We had a longer interval tempo workout on the docket – three 2000’s (5 laps around the track – 1.25 miles) with 1 to 2 minutes rest in between. Pace was mid threshold – nothing too crazy but not easy either. I felt tired for this one (we got back from Colorado at like 10 p.m. on Monday night) but my track buddy Diane was there so she helped get me through it without wimping out on pace because I wanted to keep up with her so we could chat a bit. 🙂 They had us add on a few strides/shorter sprints at the end, too. As usual, my watch just includes the workout portion, not the warm up and cool down jog. Probably did 5 miles total! 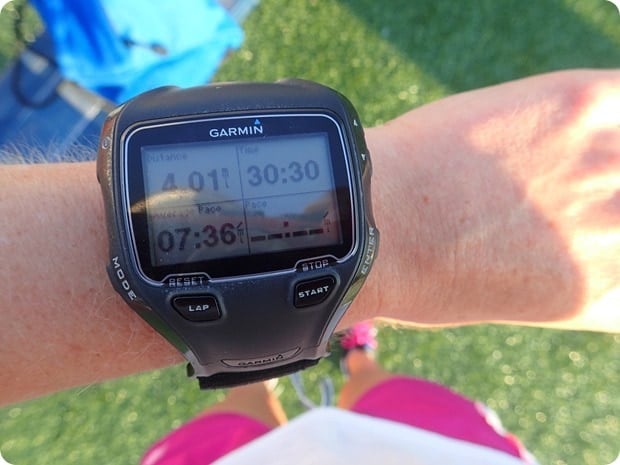 Also – a few weeks ago on my 16 mile training run with my track buddy Paul he was telling me about how he ran the Marine Corps Marathon in both 1997 and 2015. He found his old medal from the 90’s the other day and was laughing about how much running medals have changed over the years. So much more fancy bling nowadays! I told him to bring them to the track sometime to show me – and he brought them Tuesday. Cool, right? The 1997 medal is so small compared to last year’s! 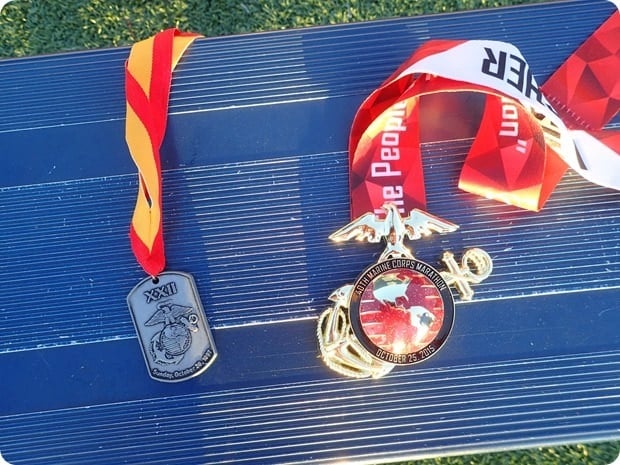 By the way, for those of you who are also running the Marine Corps Marathon – did you hear they are changing the course some and keeping the starting line open a bit longer due to the fact that metro won’t open up early for the runners? Bummer!

One last thing for my runner readers – here’s a stretch to try at home if you have a stretchy band and something you can attach it to (it was hooked around a beam in our basement). Paul from Capital Energy Training had me do this move in our mobility/stretching session yesterday and I thought it was a good one to share! I was especially tight from sitting on planes over the weekend – and from hiking – so this felt good! 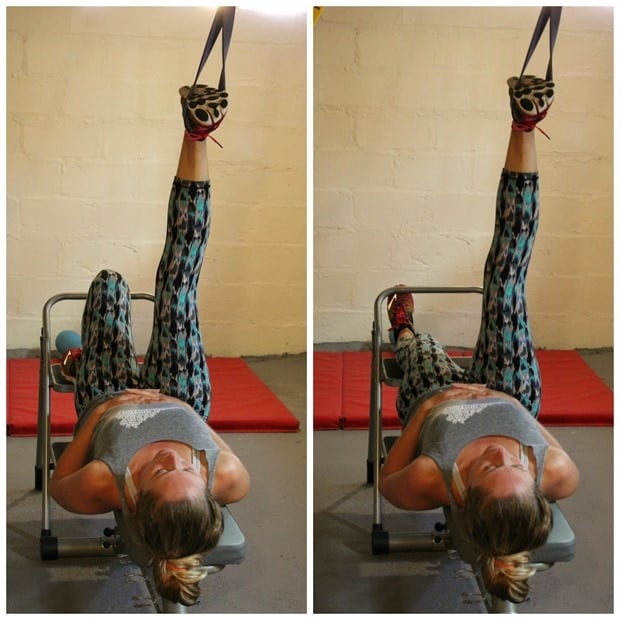 Just fit the band around the heel of your shoe. Your other leg can either be bent with your foot on the floor (as mine is on the left) or down straight (like mine is on the right – this deepens the stretch).

As for this morning’s workout, I checked out a new place in Clarendon with Chelsea and her fiance Fabio! (Matt sadly didn’t join us because he has a soccer game tonight, and he had his session with Paul last night so that would have been a lot!) It’s called Madabolic – it’s a franchise – and they offer 1 hour HIIT/interval workouts. Since this is their first week they are offering free classes all week so people can check it out. Sounded good to us! We hit up their 6:30 a.m. class today. 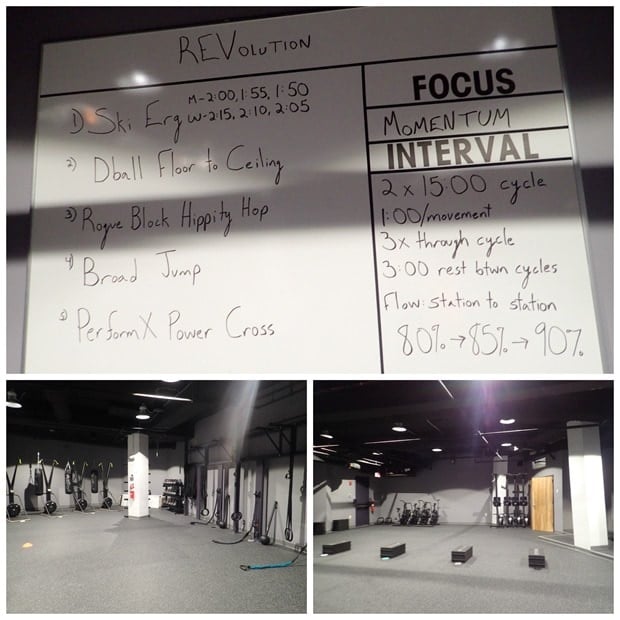 Today’s workout had us do a short warm up, then two 15 minute rounds of intervals with 5 different stations. It was a good workout – kind of CrossFit-ish. We wished the second 15 minute round had us doing different moves (rather than the same thing again), but overall it was a great workout and had some good variety. We’re hoping they get on ClassPass because if so, we’ll be back often  for sure! If you’re local and into boot camps, check it out this week while it’s still free! 🙂

On the food front, I’ve been getting back to my usual favorites: my flour free breakfast pancake never fails. Those are sprouted watermelon seeds on top – and you can see a bit of the juice on the side of the plate, but I put some frozen wild blueberries under the pancake (they melted nicely from the hot pancake) too. Plus a latte, of course! 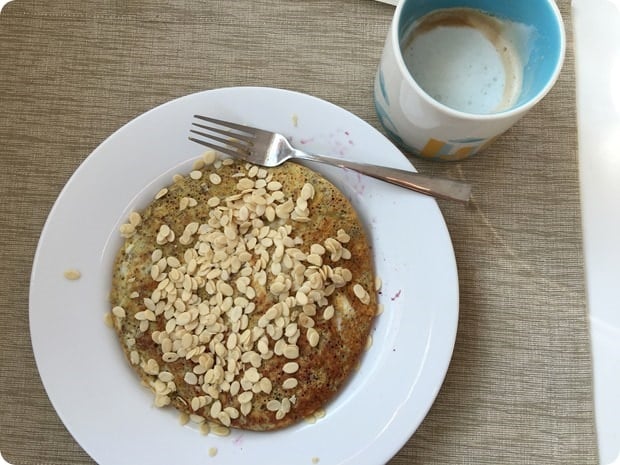 I’ve also been really into roasted cauliflower lately. Especially when it’s this pretty purple cauliflower! Coat with a little oil (we used garlic olive oil which was especially good), salt, and pepper and roast at 425 for 15 minutes. Perfect! 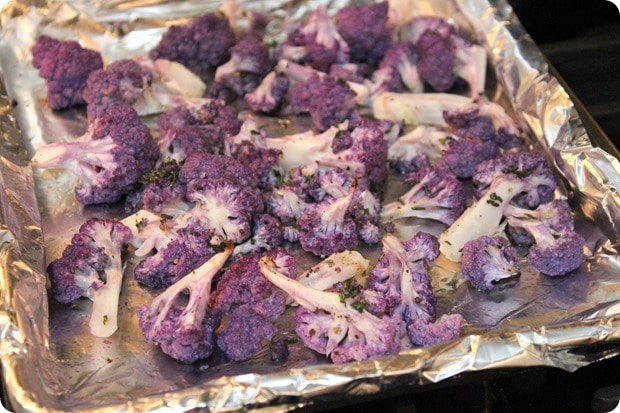 And speaking of veggies: one of my super old favorite recipes on the blog, Lemon Garlic String Beans, got a little photo update! Love that recipe – makes such an easy and delicious side. Check it out! 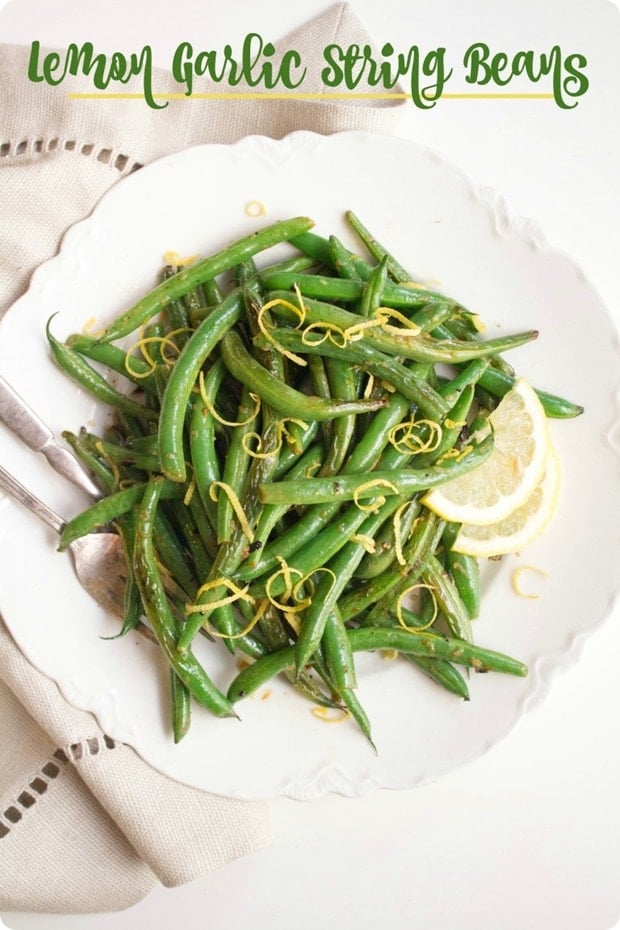 Also: I’m still obsessed with Glen’s Garden Market in Dupont. My friend Karen and I had another dinner date there this week – it’s the best! So fresh. 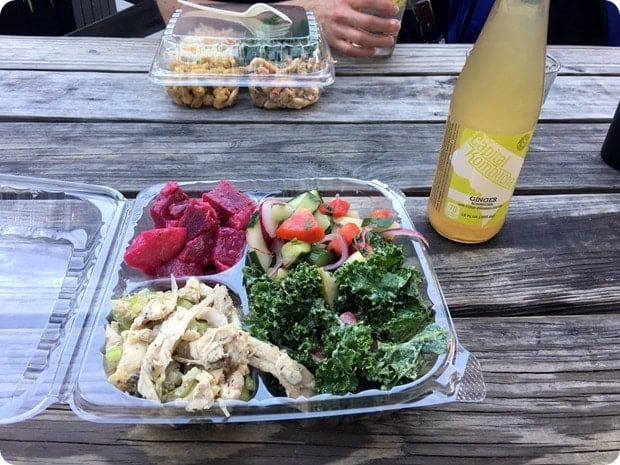 I’ve got a busy day of AnnetheRD client calls ahead – back to it! Have a good one, my friends! Also, I’ll be tackling my long run (18 miles, gah) tomorrow morning – it’s looking like it will be HOT. Wish me luck! 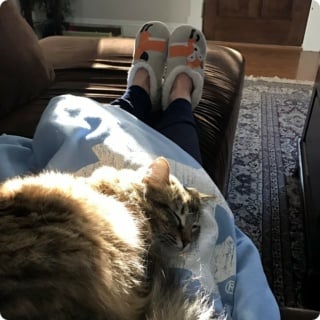 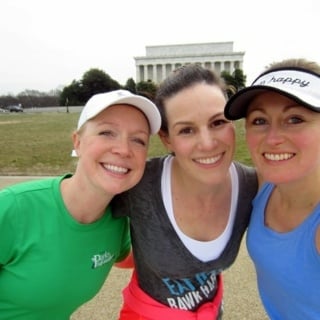 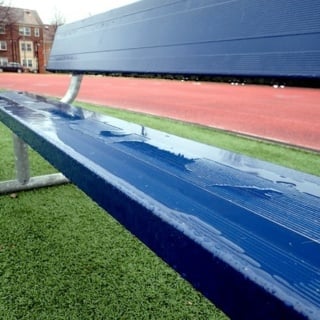 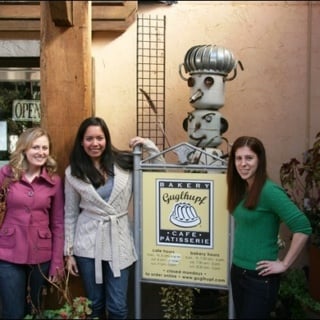 Blogger Meet Up and Stir Fry Saves the Day