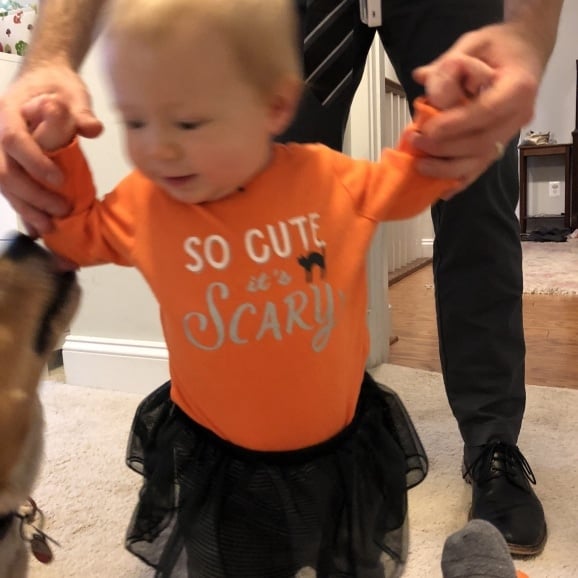 Hi guys! We had a fun Halloween – I hope you did too! 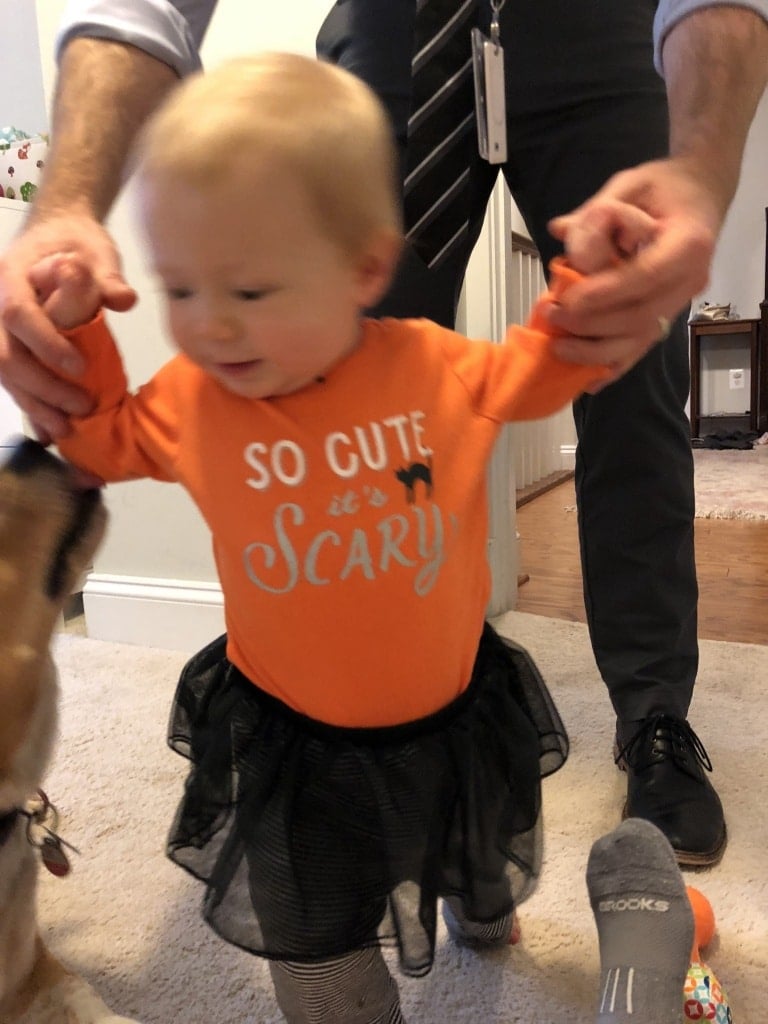 Apparently I missed the memo that everyone dresses their babies in really awesome, over-the-top costumes on Halloween – next year I’m clearly going to need to step up my game! But at least she was comfy. 🙂 Freyja was the real star, anyway – her hot dog costume is always a big hit around the neighborhood! 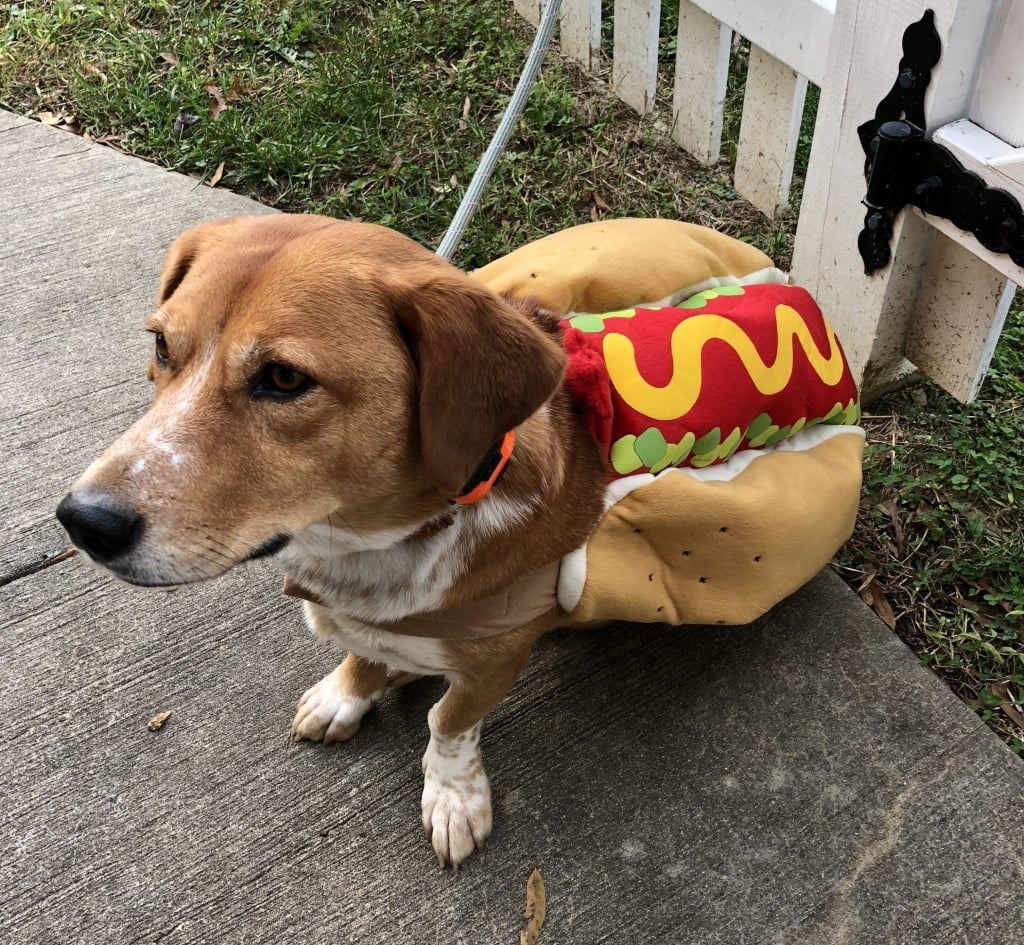 I kept lunch Halloween-themed for Riese – orange and green! She had some peas and butternut squash – I bought both frozen (the squash was pre-cut, too – win) and threw them on the stovetop with some water for a few minutes to heat and soften them up, then added some olive oil and a few shakes of salt-free seasoning to add some fat and flavor before serving. I gave it to her with some sardines for protein – she’s randomly obsessed with sardines! I just give them to her in pieces straight from the container. 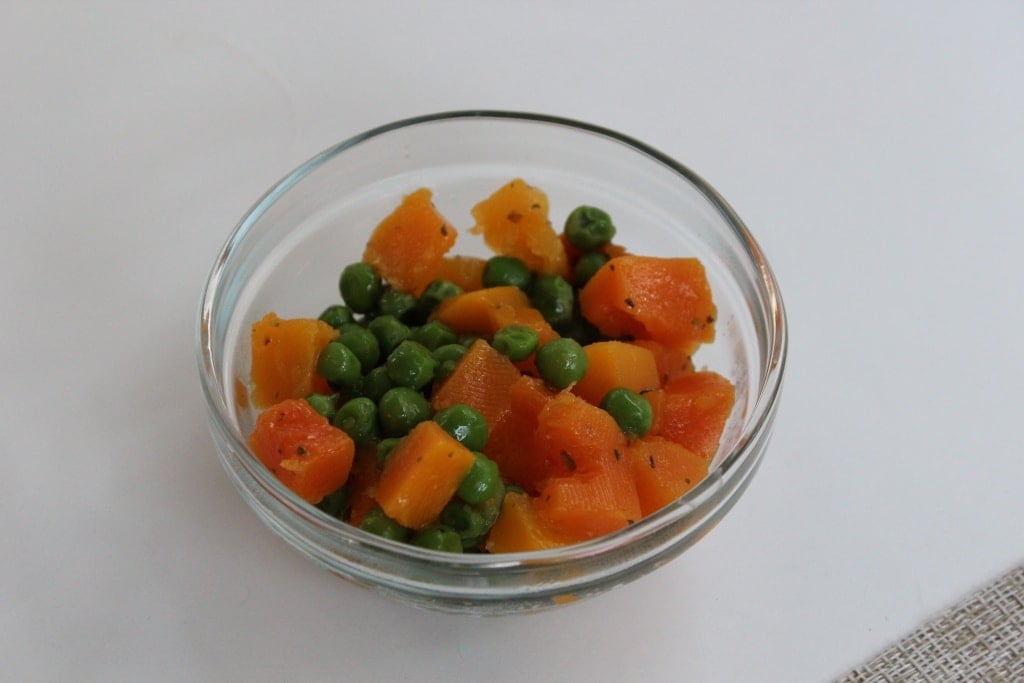 I’ve been using an old shot glass from college to try to teach her how to drink from an open cup – she LOVES it and gets really excited to try to drink from it, but so far the water is mostly going everywhere. We’ll get there! And in the meantime, she loves her straw cup (and I love that the inner cup is glass, not plastic, but that it has a plastic outer so it won’t easily break). 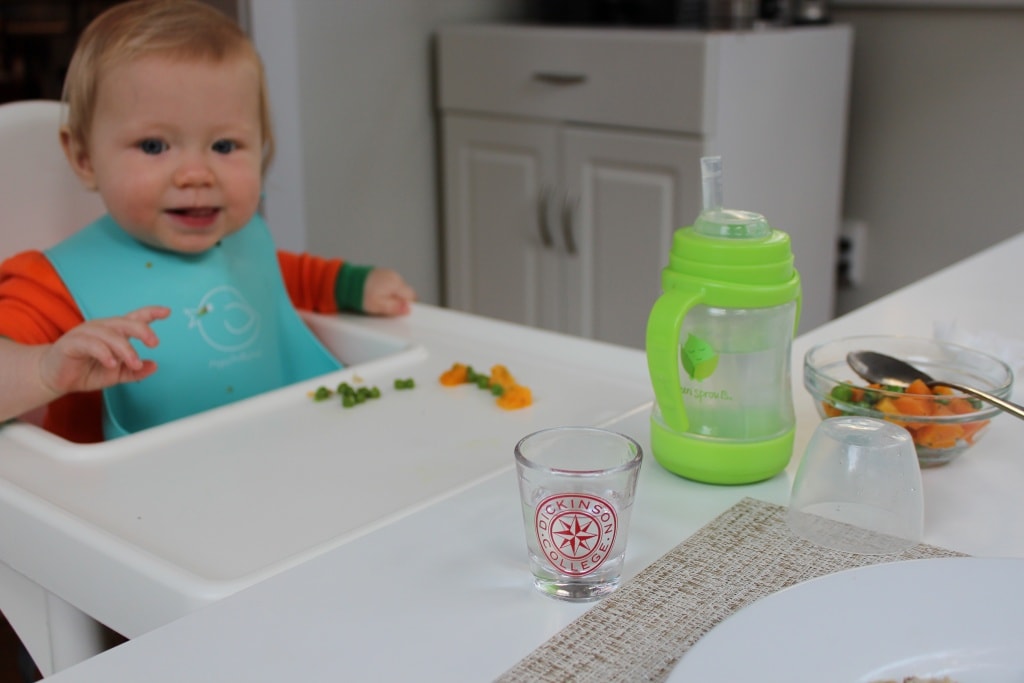 As for my food lately, I’ve been enjoying some leftover soup this week! I defrosted some of the minestrone soup I made on my batch cooking mama and baby playdate a few weeks ago – so nice to have that on hand. I added some leftover quinoa and chickpeas I had lying around, plus a couple other leftover veggies as well. Yum! I’ve had this a few days in a row for lunch… easy and yummy. Usually I ended up adding some crackers and cheese on the side for more fat and crunch as well! 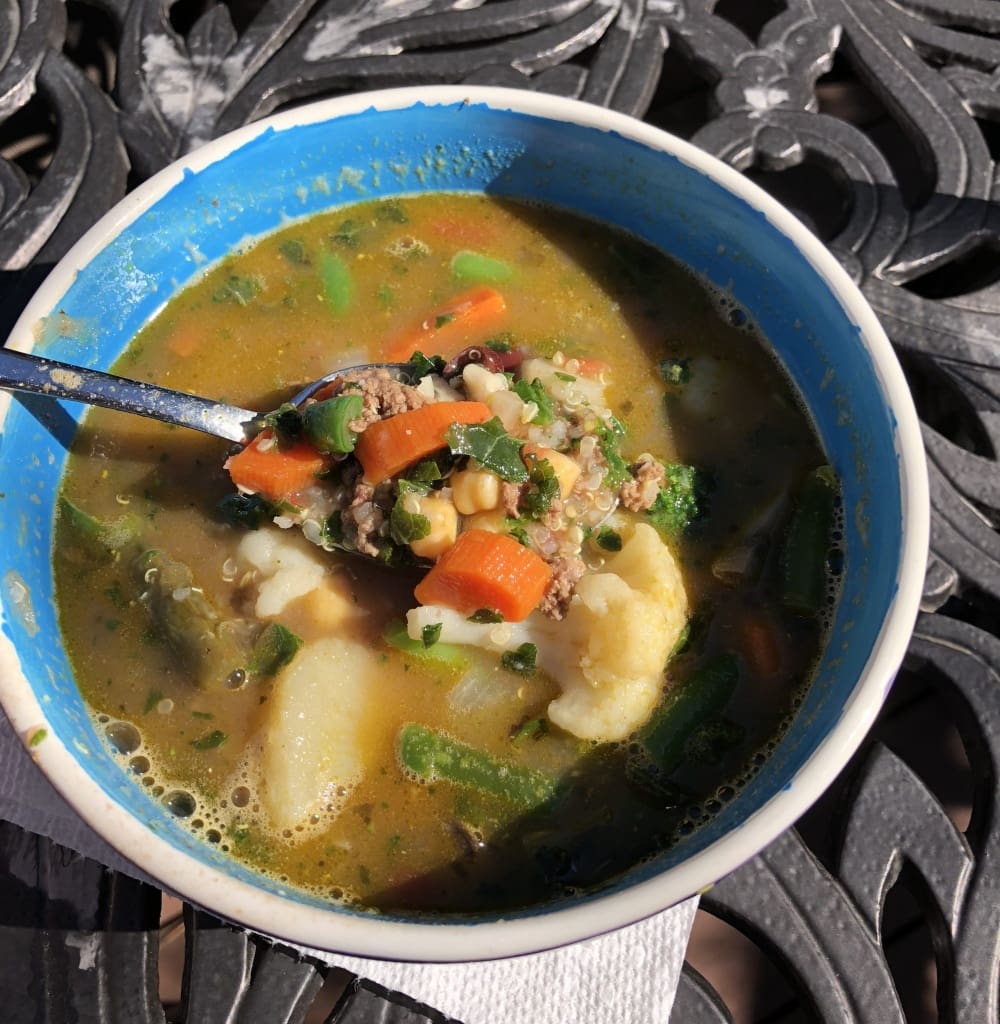 As for yesterday’s lunch, I combined an errand with a social outing and grabbed lunch with fellow blogger Emily at the Whole Foods salad bar before grabbing some groceries (I mostly just wanted one of their organic rotisserie chickens – so perfect for Riese and I love that theirs aren’t super salty). As usual, I got a super random mix of stuff. Their garlicky kale is my favorite, and I loved the edamame quinoa salad too! Plus some chicken and feta and random other veg, and an Honest Tea. 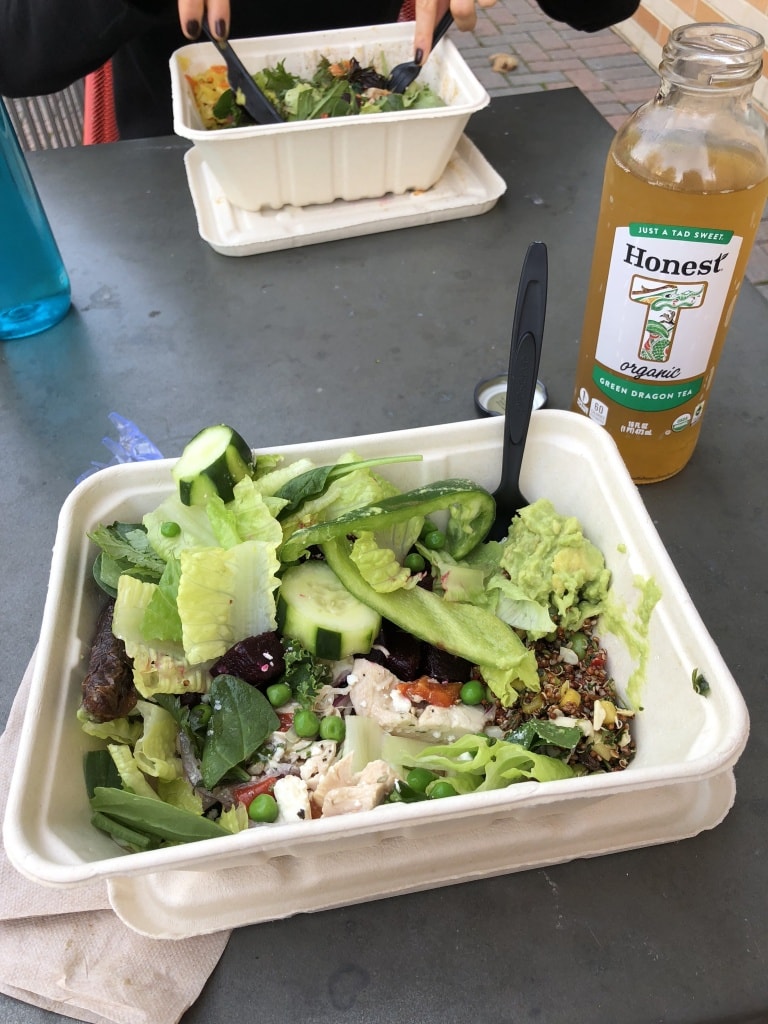 As for dinners this week, on Halloween night we ordered in sushi because we were both tired and didn’t want to cook – hit the spot! And the other nights so far we’ve done our usual Blue Apron thang. One of the Blue Aprons had roasted squash and chicken – I love sheet pan meals (<- recipe ideas), as you guys know! So easy and yummy. 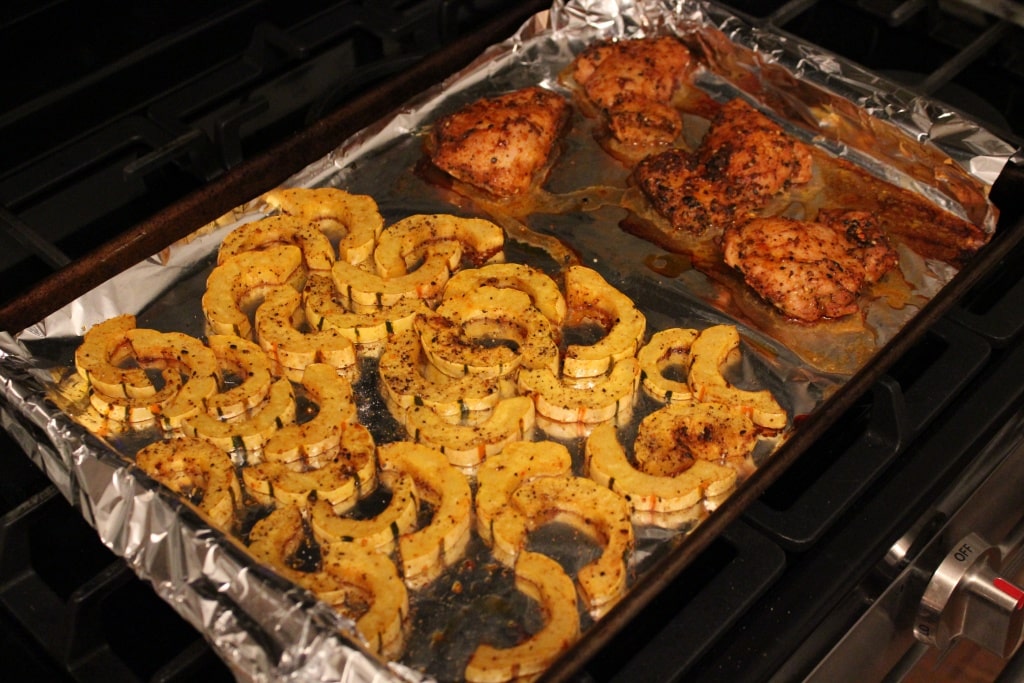 Blue Apron has been doing a grain bowl theme lately and I love it! 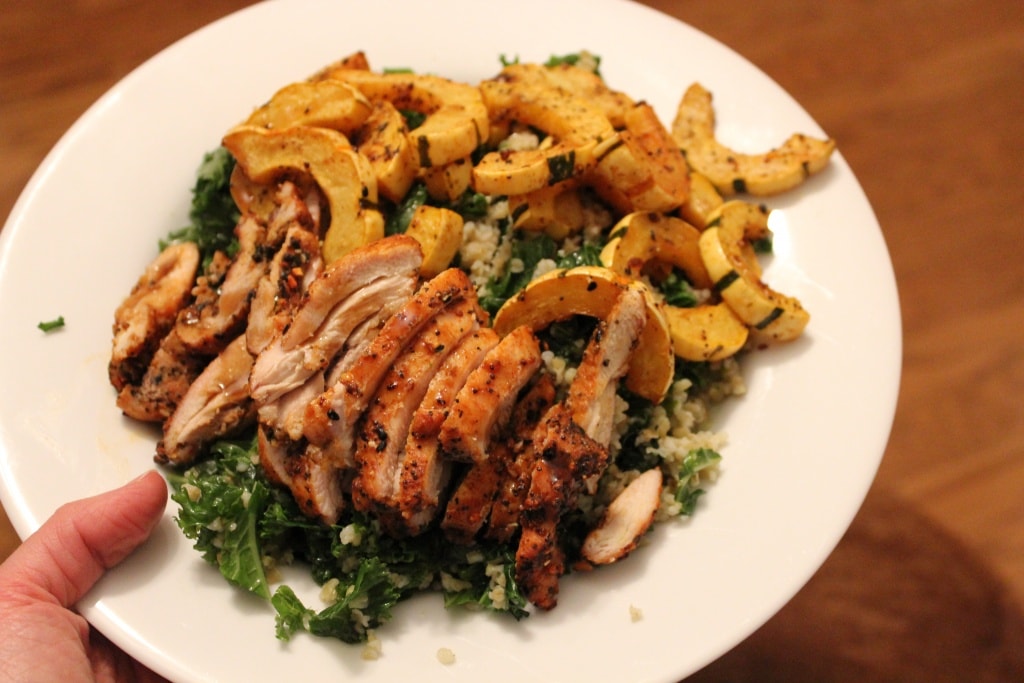 Have a great day and a nice weekend, my friends! 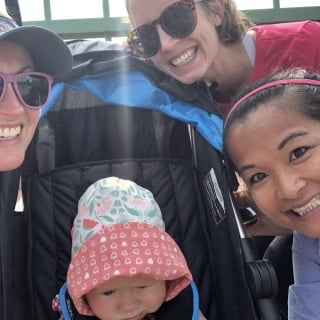 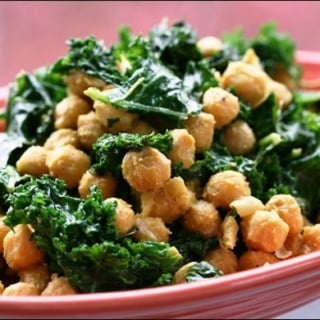 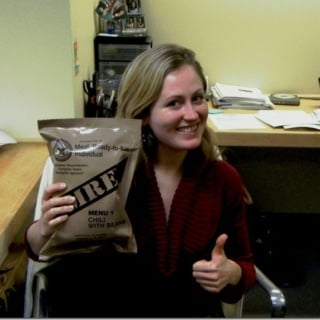 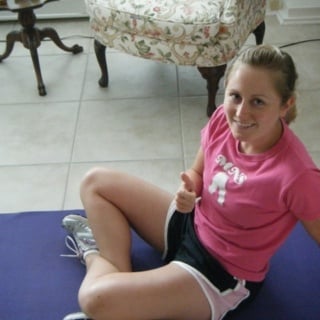