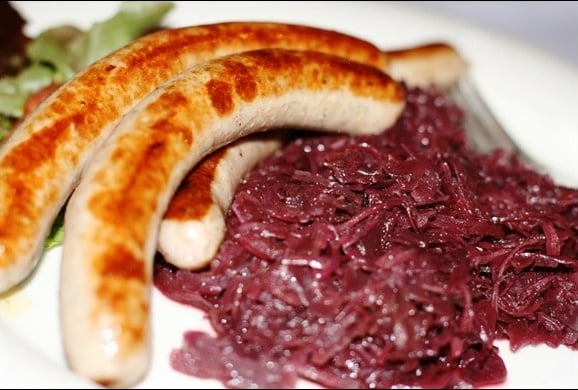 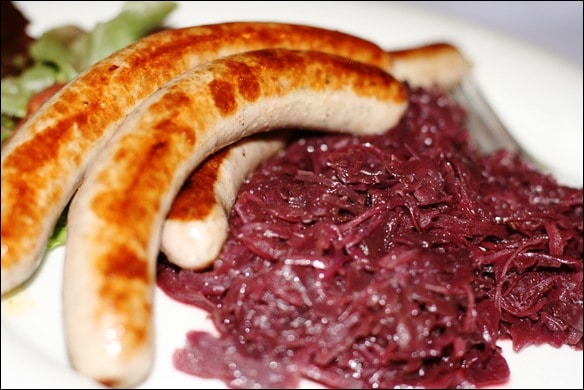 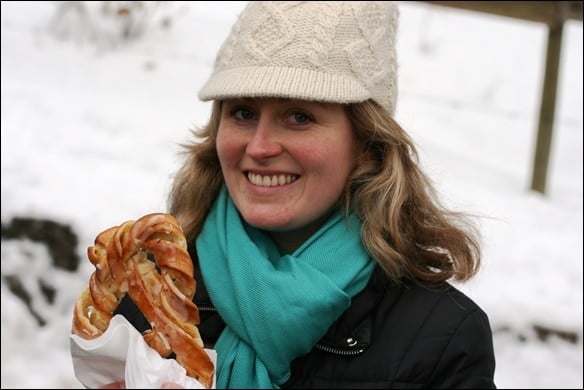 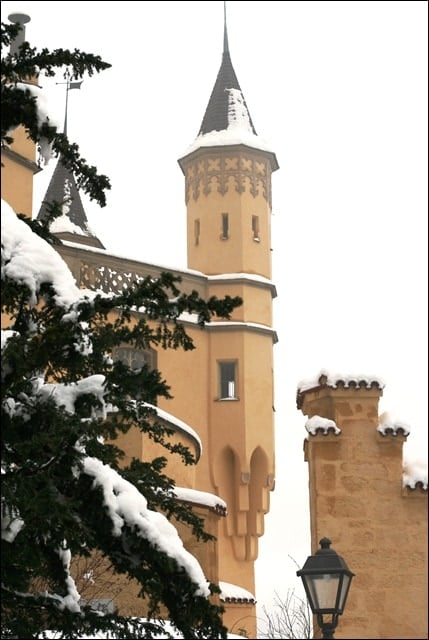 Today, my family drove about an hour away from Garmisch to tour the beautiful Hohenschwangau and Neuschwanstein Castles! 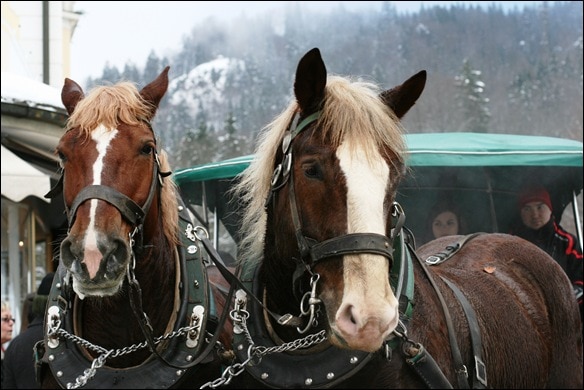 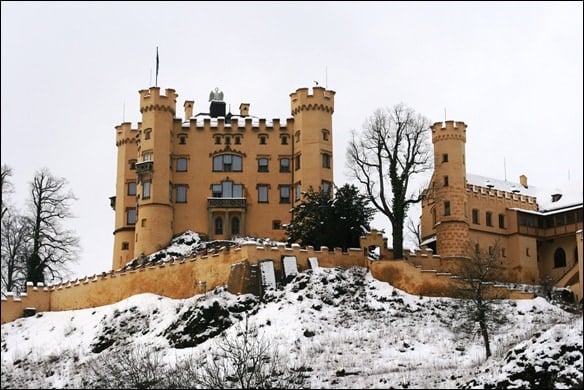 Hohenschwangau Castle or Schloss Hohenschwangau (lit: High Swan County Palace) is a 19th century palace in southern Germany. It was the childhood residence of King Ludwig II of Bavaria and was built by his father, King Maximilian II of Bavaria. It is located in the German village of Schwangau near the town of FÃ¼ssen, part of the county of OstallgÃ¤u in southwestern Bavaria, Germany, very close to the border with Austria.

It was absolutely beautiful! I can’t even imagine how cool it would have been to live in a freaking CASTLE. 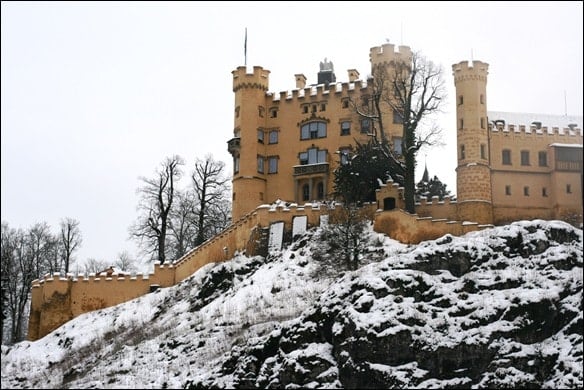 Sadly, no photos were allowed inside, but my favorite was the king’s bedroom, where the ceiling included transparent stars that lit up when a light in the room above was turned on, and a “moon” that could be adjusted based on the real moon to become half, full, a sliver, etc.! So cool. 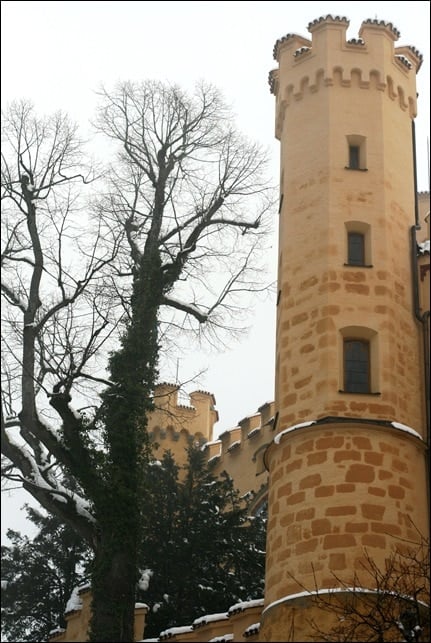 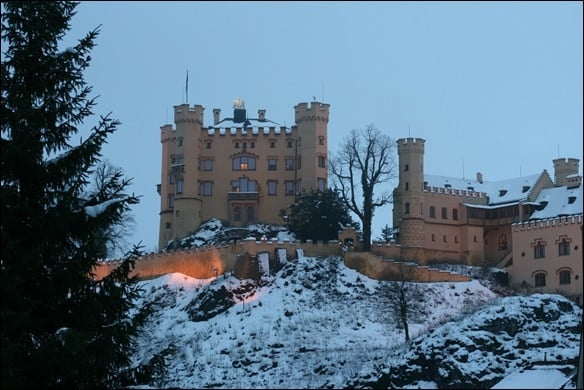 Next, we headed up to Neuschwanstein Castle, built by King Ludwig II himself! You can see his castle from his parent’s place. Weird? 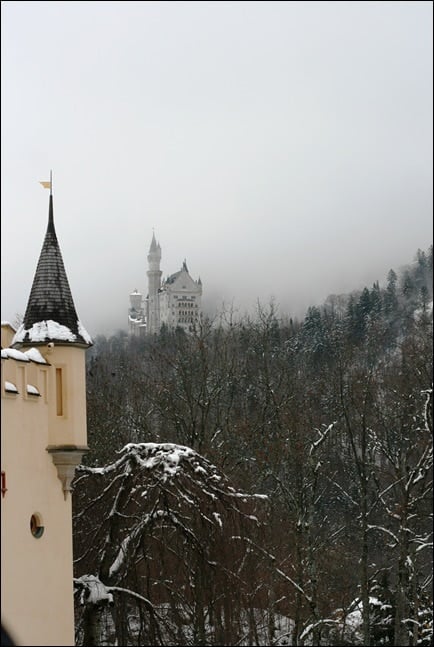 Apparently he wanted to upstage them. I think he succeeded. 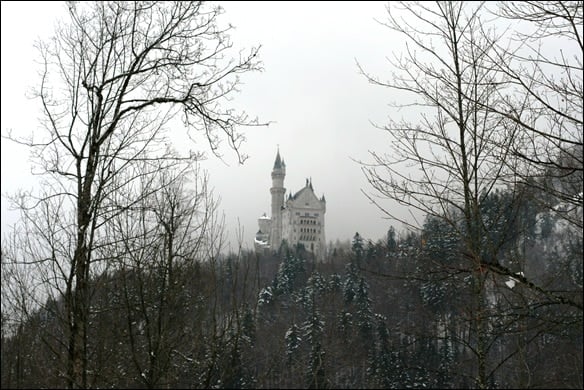 Neuschwanstein (which literally means “New Swan Stone Palace”) is in southwest Bavaria and was commissioned by King Ludwig II as a retreat and an homage to Richard Wagner, a German composer and director known for his operas. The castle is named both for the Swan Knight in one of Wagner’s operas of the time and because Ludwig was obsessed with swans. The castle is liberally decorated with them. 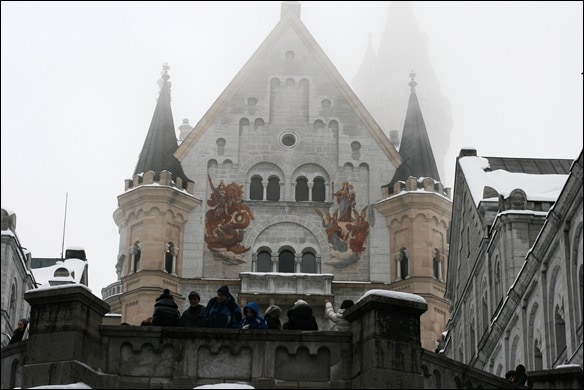 Ludwig II was a little bit crazy. He commissioned a number of fantasy castles like Neuschwanstein to be built, but this is the most famous — and it was never even finished! Only 15 of the planned 200 rooms were finished, because construction on the castle stopped immediately when Ludwig drowned.

Ludwig’s death is a bit of a mystery — on June 9, 1886, a government commission arrived to depose Ludwig, but he had been tipped off by a servant and had police present to protect him. However, on June 12, a second commission arrived, including a psychiatrist called Dr. Gudden who had been part of a panel who helped write a medical report ruling Ludwig insane and unfit to rule, even though they had never met Ludwig. Ludwig was taken to lake nearby. The next day, he asked Dr. Gudden to go for a walk with him. The two set off alone and were later found dead, floating in the water. Ludwig’s death was ruled suicide by drowning, but was never proven and Ludwig’s lungs were free of water according to the autopsy. Most people believe he was murdered by his enemies. Creepy, right? The jury is still out whether it was suicide or homicide. 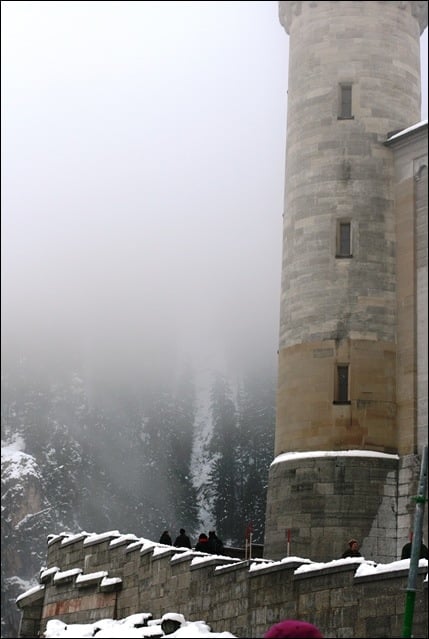 The tour through the castle is so cool and the rooms are very ornate — in particular King Ludwig II’s bedroom! He has an amazing four poster bed with wood carvings on top of it, and he also built his own home theatre, where he brought actors in to perform for him!

Even more awesome/weirder — one of the rooms is a man-made cave, complete with stalactites!

Me & my mom with the castle behind us: 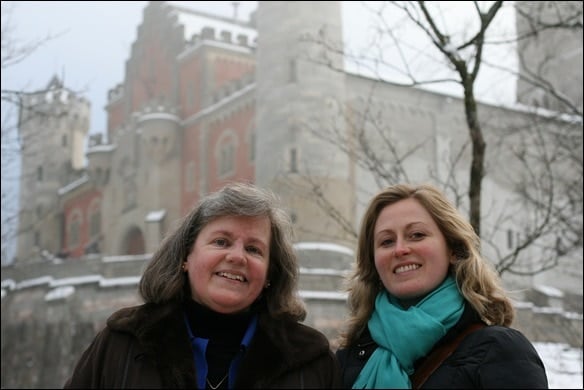 I’ve actually been to Neuschwanstein Castle once before — in May 2009 with my German friend Melli! Melli and I met as random roommates while I was teaching English in Prague and ended up becoming good friends. She headed home to Germany before I left Prague, so I took the bus from Prague to visit her in Stuttgart, Germany, where she’s from! We spent a day at Neuschwanstein and it was amazingly beautiful. There’s this awesome bridge across the way from the castle that gives you the best view ever — I was bummed because it was closed today, given the snow and all. 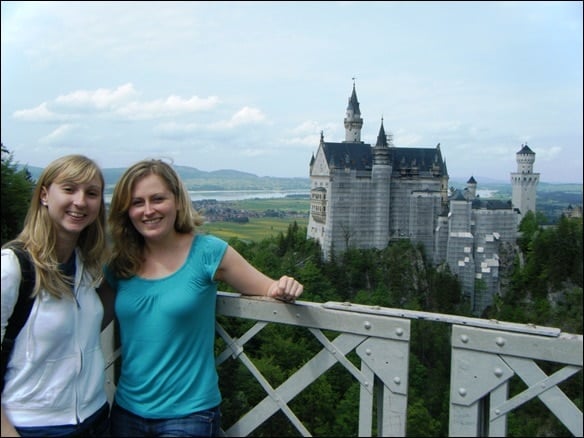 Gorgeous view, right?? (minus the stupid scaffolding — I think it was gone today but I couldn’t tell since we were on the other side of the castle!) 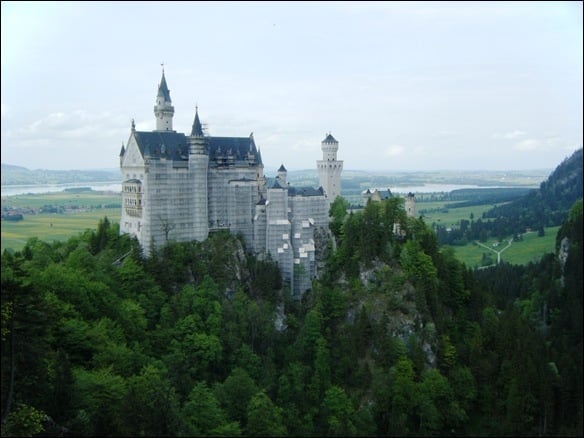 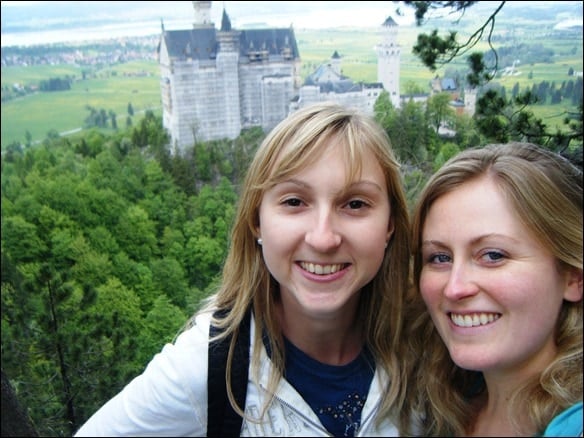 My favorite thing ever, though, was the amazing view from the castle windows. Sadly today it was way too foggy to see anything — but when I was there with Melli, it was incredible. Check it out: 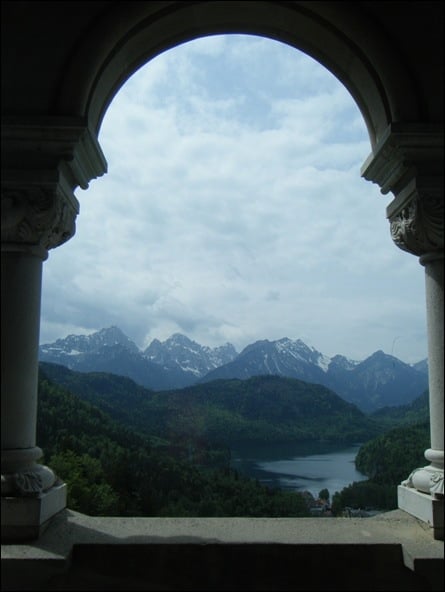 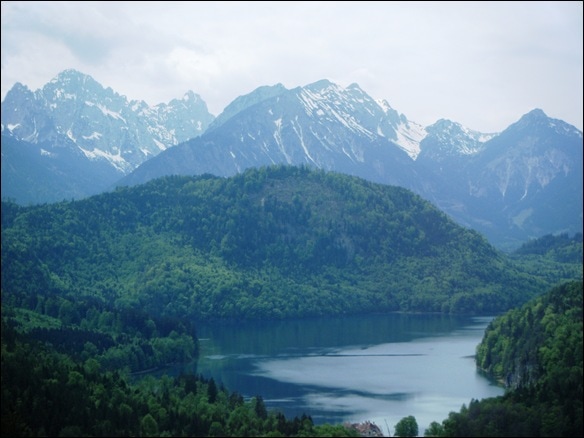 Insane. I think I’d like a summer home here 😉 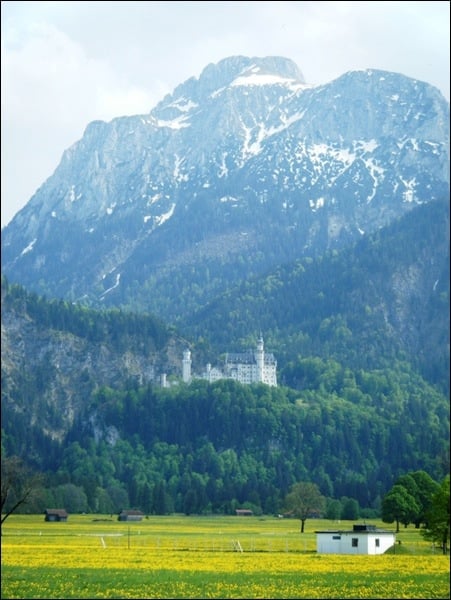 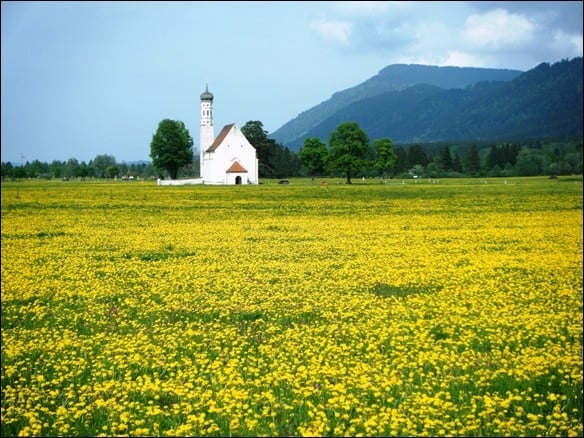 Yeah, Germany is gorgeous in summer. And in other fun news, Melli is coming here to play on the 3rd! The last time I saw her was this May 2009 trip, so I can’t wait 🙂

Anyway! Back to the present. 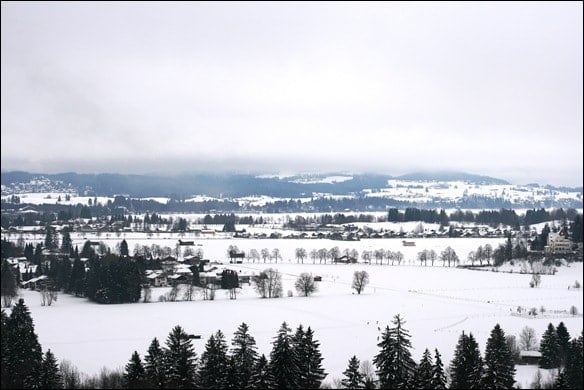 What a fabulous day 🙂 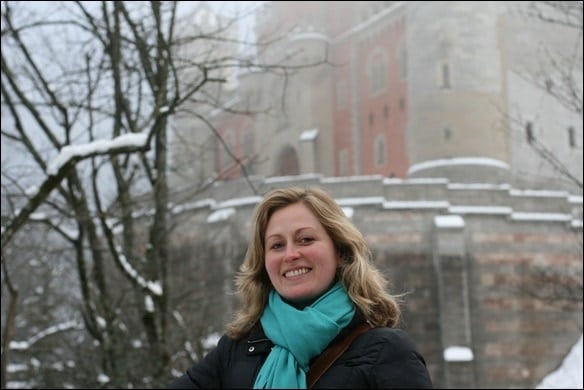 I’m off to bed — I need to get a good night’s rest because I have a fun surprise visitor arriving tomorrow!! Any guesses who? 🙂

p.s. Thanks for all your great feedback on a fANNEtastic logo/tagline! I totally hear you guys on keeping it short and sweet. Now I’m leaning towards “Come for the recipes. Stay for the awesomeness.” or maybe just “awesome” instead of “awesomeness.” What do you guys think? As some of you pointed out, I already have “food, fitness, & health blogger” on the front, so I don’t think I need to include all that in the tagline. 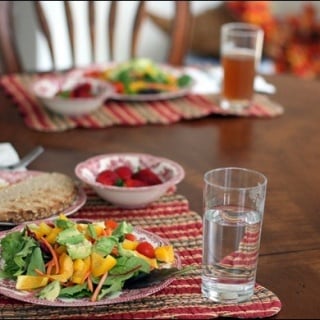 Gearing up for Shenanigans 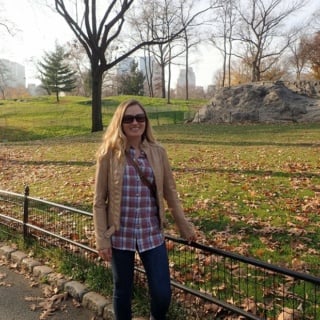 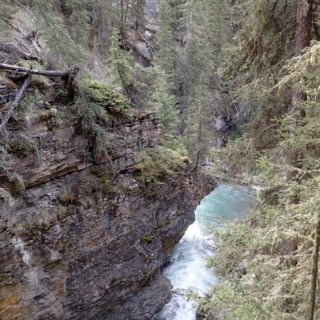