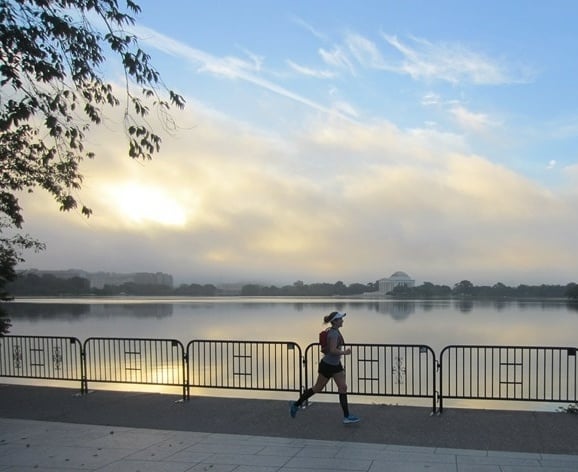 This morning I got in my LAST long run of Marine Corps Marathon training!!! So exciting. The race is in 2 weeks and the weekend before the race I’ll be doing a long hike out in Seattle so I’m counting that as my last long run. 😉 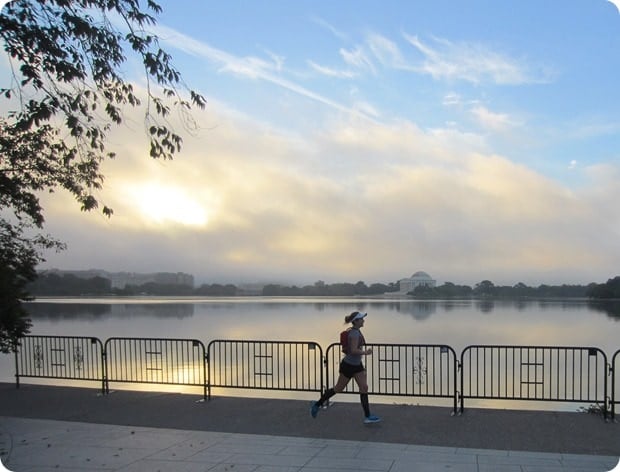 I had to get my long run in early once again this week because tomorrow I’m heading off to FNCE, the big annual Registered Dietitian conference, in Boston! I’ll be doing a couple fun runs around Boston while there but didn’t want to have to worry about a long run, so today it was.

My track coach wanted me to aim for 16 to 18 miles (darn, I thought he might have me go shorter…) with about 6 of those miles at my marathon goal pace. I decided I was going to do 16 because I’m feeling pretty burned out and was also tight on time since I had to get back for a bunch of AnneTheRD calls and meetings this morning. And, I just crushed 22 miles last week. 🙂 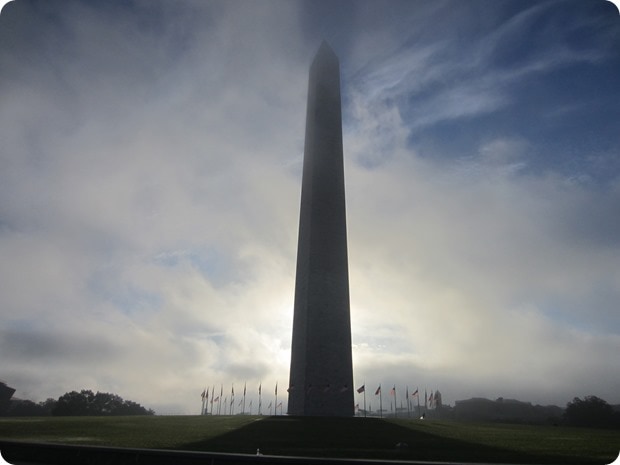 To get in the 16, I started out at Iwo Jima in Arlington, with plans to run the 3 miles to Smithsonian metro to link up with a friend to run 10 miles, and then run the same 3 solo miles back. Having company for part of the run = great!

One thing I love about the running community is that people are so friendly. When I got out of my car at Iwo Jima at 6:30 a.m. to start my run, there was another woman also getting out of her car right by me. It was super dark and foggy out and a bit creepy to be honest. We were both like – “Hi, want to be friends and run together for a few miles? Looks like we’re going the same way and it’s really dark out.” 🙂 So – we did! 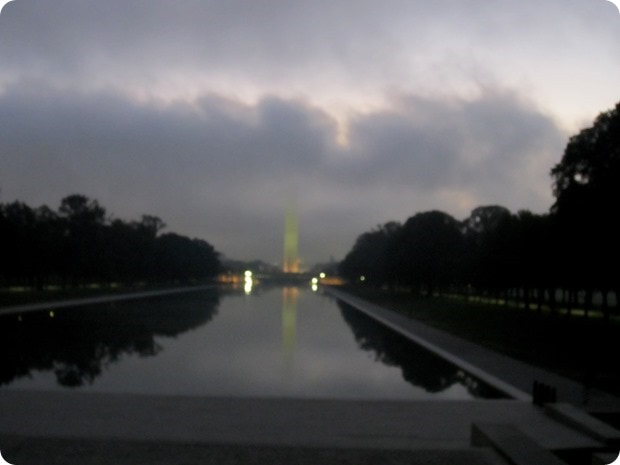 We ended up running 3 miles together and having fun chatting away the whole time. Turns out she’s running the NYC Marathon the weekend after MCM and was out doing a shorter weekday run. If you’re reading, it was fun meeting and chatting with you Kate – thanks for the company! 🙂

At 7a.m. I arrived at Smithsonian metro right on the National Mall to meet up with my friend Ashley – she was coming into the city from Maryland so this was a good in between spot! Ashley is the roommate in San Diego of one of my best friends from grad school; we met when I was out there visiting last year. She’s in DC for a month long rotation for her radiology residency and is also a big runner, so meeting up for a run was the perfect way to hang out. Fun to see her again! 🙂 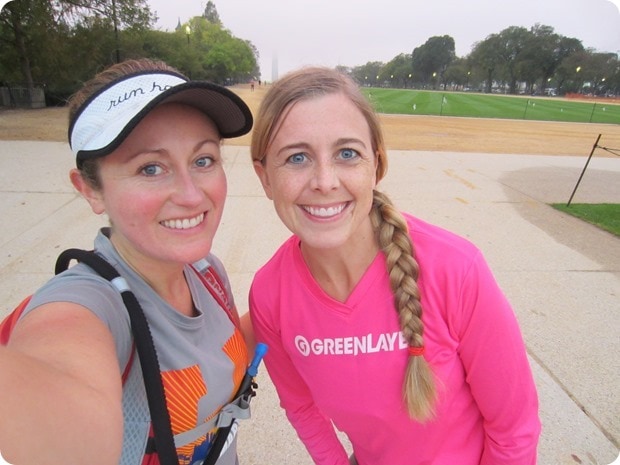 Ashley and I had a great time chatting away while doing a nice and scenic monument tour all around DC. Running around DC so much means I really know my way around by this point, which is convenient for showing visitors the sights via our running shoes! 🙂 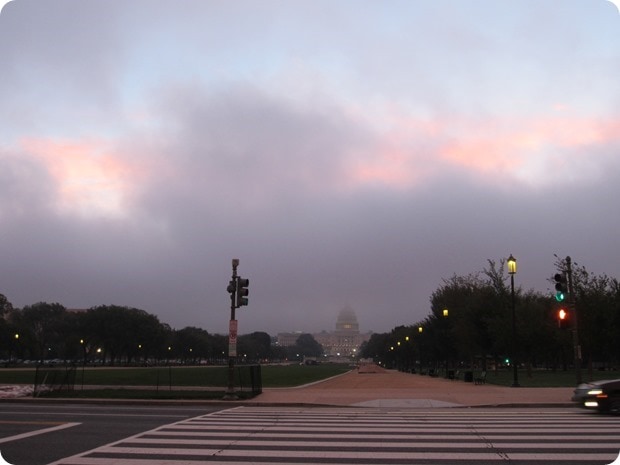 We did two loops around the Capitol and a loop around the tidal basin, with some more mileage added in along the mall and down by the Lincoln Memorial. It was so hazy out – cool looking with the Washington Monument disappearing into the sky! 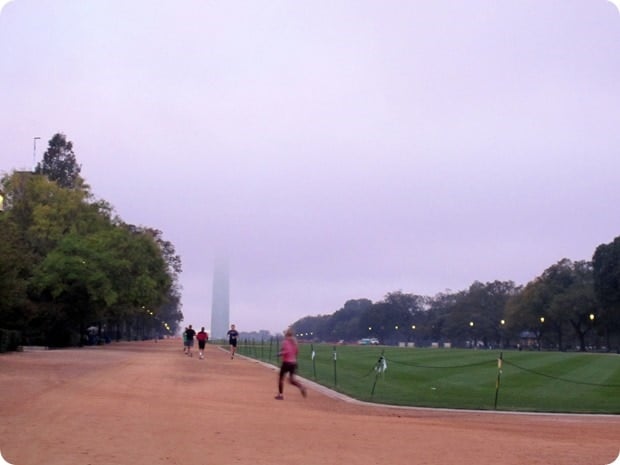 10 miles later I said farewell to Ashley and carried on on my own for the final 3 miles. Thanks for the company, Ashley – it was great seeing you! Enjoy the rest of your time in DC. 🙂

I was supposed to do some marathon goal pace accelerations for part of this run as I mentioned earlier but to be honest I wasn’t feeling up to it – I tried to pick it up a little at the end, and I did a bit, but not as much as I was supposed to. Oh well! My overall pace was still decent for me for a super long run, so I’m cool with it. Pace was a bit all over the place but ranged between 9:05 and 9:40 minute miles. 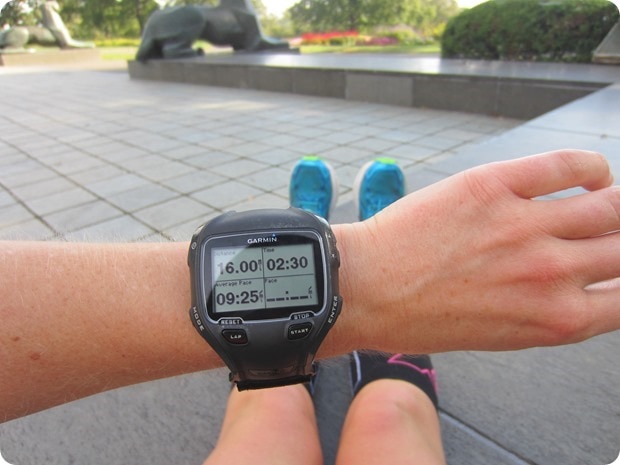 Speaking of marathon goal pacing, I think I’m going to aim for around an 8:55 minute/mile pace, which would have me finishing in 3:54. My main goal is I’d like to beat my Richmond Marathon time of 3:56:48 (a 9:01 average pace). I think I could probably do a bit faster per my training, and given that all my track buddies (who I did a bunch of long runs with, and who I train with on weekdays) just rocked Chicago Marathon with times ranging from 3:49 to 3:52, but MCM is hillier than Chicago, and I also really want to feel good and have a positive race experience. So – I’d rather be more conservative and aim for just under 3:55 vs. trying to be faster and totally crashing and feeling like crap. Anyway – we’ll see. But that’s the plan as of now. 🙂

As for the rest of my workouts this week, on Monday Matt had the day off for the Columbus Day holiday so I took the afternoon off and we went on a nice long bike ride! 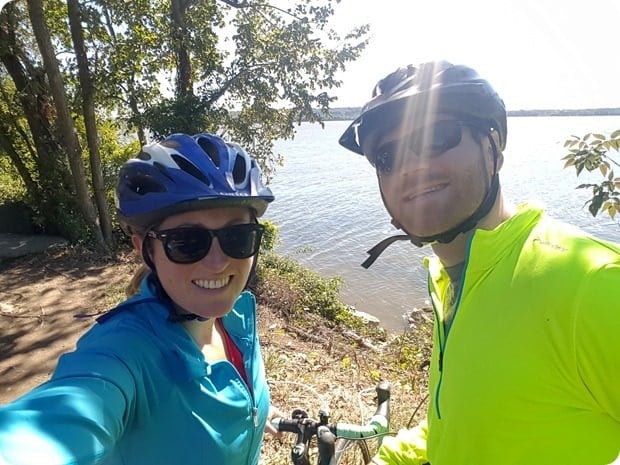 Matt bikes fairly often with his guy friends but I hadn’t taken my bike out in wayyyyy too long. It was absolutely perfect out – 60’s and super sunny – and it was so fun to mix it up from the running! 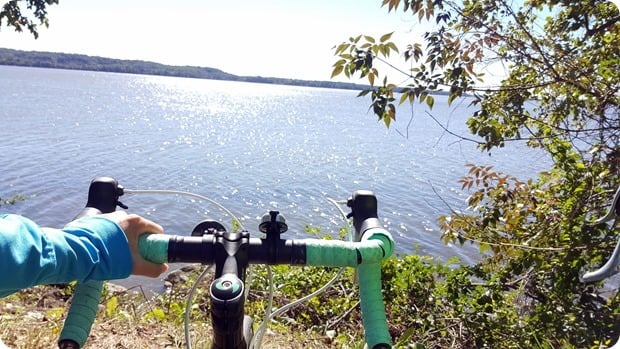 We parked in Old Town Alexandria and then biked the 10 miles down to Mt. Vernon and back for 20 miles total. I don’t usually do this section of the trail (I always run the more northern section) so it was fun to have some different scenery, although I always forget how many tree roots there are under the trail – a bit bumpy on a bike! Things you don’t notice while running… 🙂 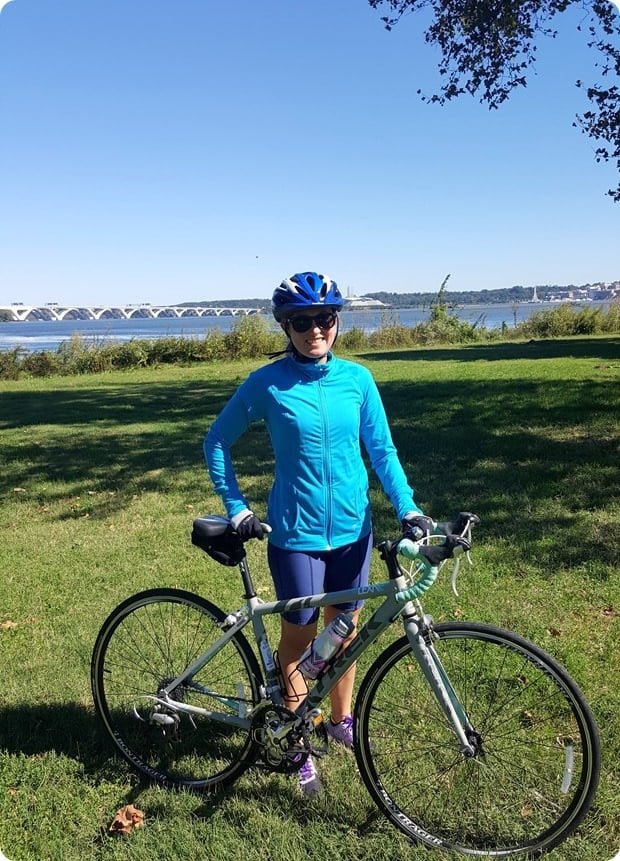 On Tuesday morning, I met up with my track group for a workout. We had 2000’s on the agenda – 5 laps around the track – with 4 of them at a threshold pace and the last lap even faster (5k pace). It was a tough one – I did three rounds + an additional 800 – but I felt GREAT out there thanks to really cold weather and lots of sleep over the weekend. 🙂 I think running in the 40 to 50 degree range is my favorite – felt so good! I did an additional mile warm up and nearly another mile cool down to make it about 6 miles total. 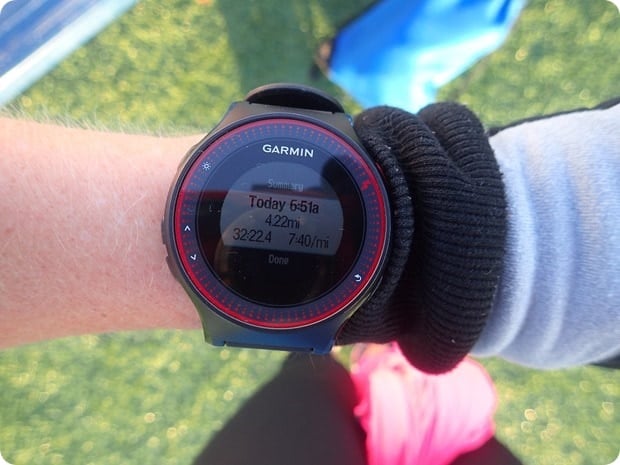 And yesterday, I had a great session with Paul from Capital Energy Training – we focused on some really deep stretching this time which felt good on my tight muscles following the fast track workout the day before – and got me ready for today’s long run!

I will leave you with this morning’s post-long run refuel. Hit the spot! Microwave wilted spinach + avocado + 2 fried eggs + a savory waffle with some strawberries on the side. 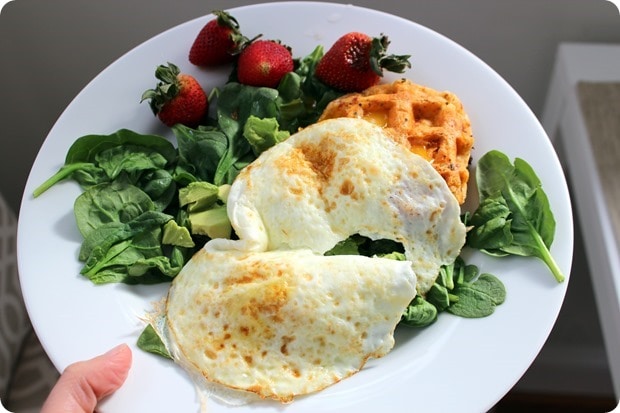 Stay tuned – I’ll be sharing a fun pumpkin recipe round up tomorrow before heading out of town. Have a great day guys!

Fellow fall marathon friends – how is your training finishing out?

p.s. Exactly 4 years ago today Matt and I were getting ready to embark on our greatest adventure yet. <3 Here’s to many more! (photo credit: Taylor & Ben Photography) 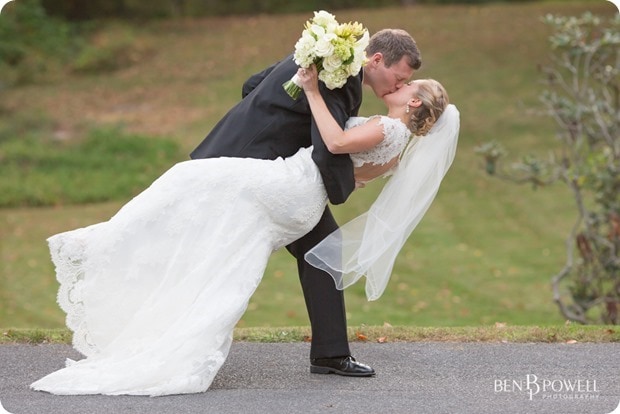 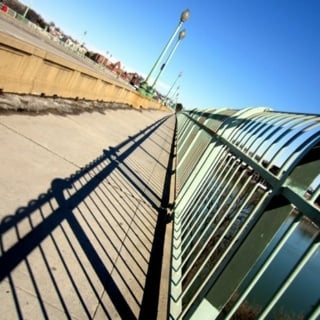 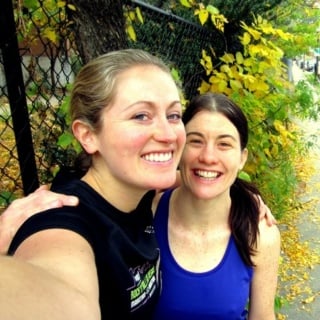 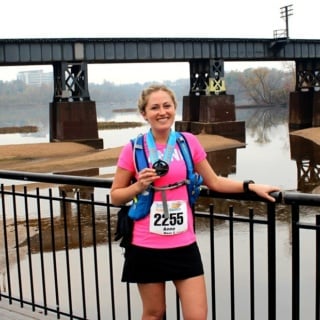 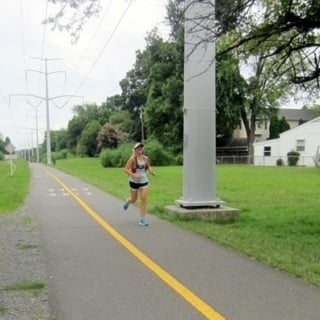