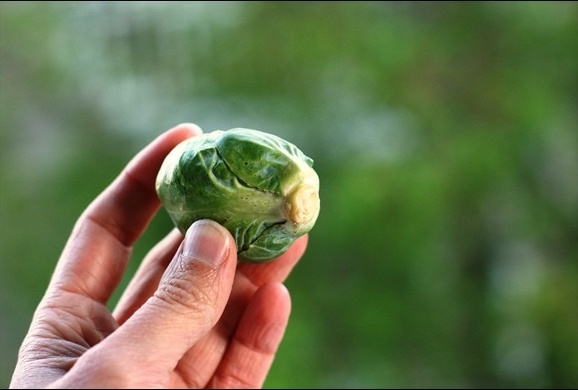 I love that almost no one else knew about slicing Brussels sprouts, either! Here’s to all of us eating delicious sprouts from now on 🙂 I think next time I will also try slicing them in half — a lot of people recommended that, too, both to decrease cooking time and increase the amount of the sprout that gets a nice golden crust! 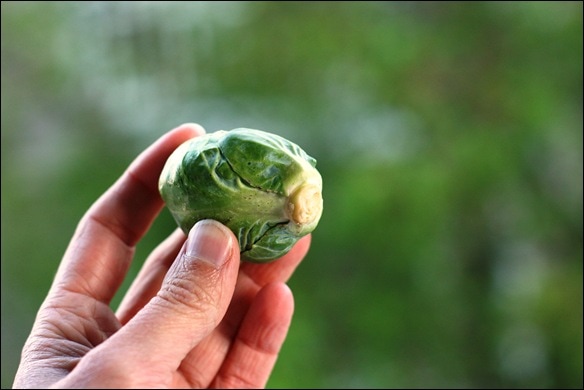 Anyway! I have to share my Tuesday afternoon with all of you! If you’re just tuning in, I’m currently enrolled in UNC’s Masters of Public Health in Nutrition, which will give me all the coursework and internships I need to prepare me to take (and hopefully pass) the Registered Dietitian exam. I’m in my second semester and will be done in December 2012 🙂

As I mentioned earlier, we have internship hours to do as part of our Food Service class, and on Tuesday we were back in the UNC hospital kitchens! Last time we were in there we were making my black bean burgers, and this time we got to help with lunch preparations! Hair nets were back in action again, don’t worry. 😉 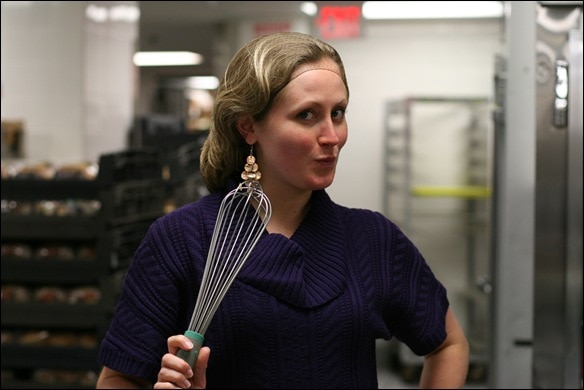 It was really interesting — we were each assigned to a food service employee and got to help them build their patient trays and then bring the trays up to the patients themselves for lunch! UNC has a portable computer entry system that the employees use to input what the patients want to eat, and it spits out a ticket for the employees to use later as a reference. The tickets also include information about any special diet the patient might be on — low sodium, carbohydrate control for diabetics, etc. If they try to input something the patient can’t have (i.e. if they are on a low sodium diet and try to get ham or something), it will kick it out of the system. Pretty cool! I was impressed with the amount of medical jargon that the employees had to know, too. 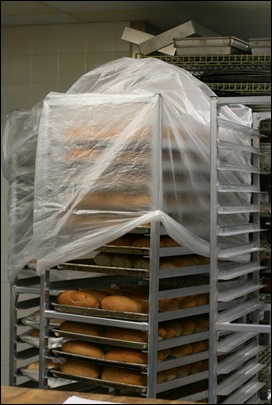 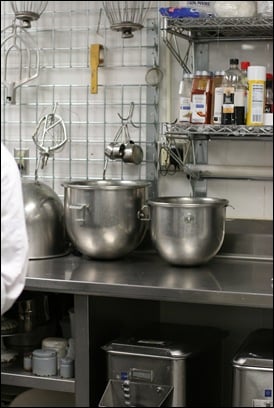 The main plates with hot food on each lunch tray go into a heated base with a cover, which will keep it warm for up to 45 minutes. The rest of the food (drinks, any cold sides they requested, etc.), just go out in the open on the tray. Once all the lunch trays were assembled, we took them up to the patients! Each employee is assigned a specific floor/area, and the carts we were using held about 35 trays. The floor we were on was the one that housed a lot of the really sick patients, so we had to put gloves on every time we went into someone’s room to deliver their lunch, then throw them away before leaving the room and wash our hands when we came out. I felt sad for the people in there… I hope they get better soon 🙁 The lady I was shadowing says she always smiles really big when she walks into their rooms because it just might make their days. How sweet is that?

Once we were done delivering, we got to taste test the food ourselves! Here’s what was on the menu for lunch on Tuesday — BBQ chicken, potatoes, and roasted carrots. 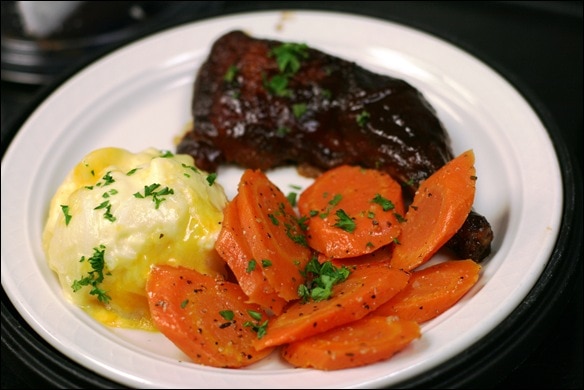 Patients can also order things like sandwiches and salads if they prefer that instead, and there’s a ton of other cold sides, too, like fruit, dessert, etc.

Here’s the “heart healthy” version of the lunch for people whose conditions require it (although I think we should give everyone this version!) — boneless skinless BBQ chicken, lower fat mashed potatoes, and steamed veggies. 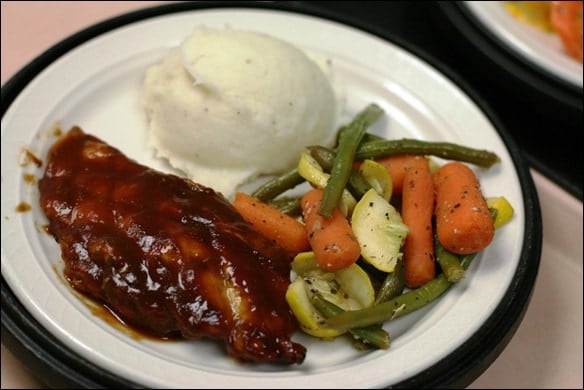 I actually liked the heart healthy chicken better than the regular one! Both were tasty, though.

We also got to try an entirely pureed version of the meal, for patients who are having trouble swallowing or need really soft food. 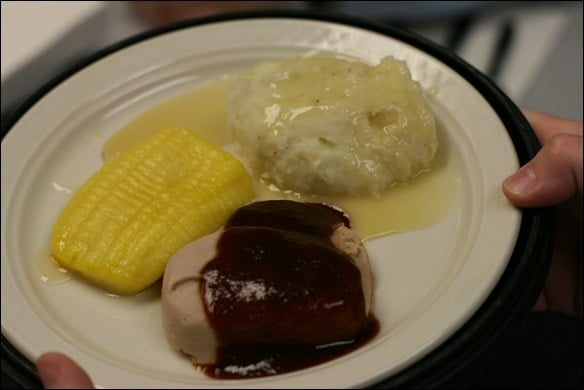 Yes, that is pureed meat!!! It was (not surprisingly) pretty gross and scary, not gonna lie. I just couldn’t handle the weird texture! I think if I had to eat pureed food I would not want meat! But, I get that having a normal looking meal would be comforting to some of the patients. They also had a really soft chopped meat in broth that was way better.

See that corn? It’s pureed, too, and then put into a mold to look more like regular corn! It tasted exactly like sweet creamed corn, which I’m not a fan of, but if you were it would be a great substitute! 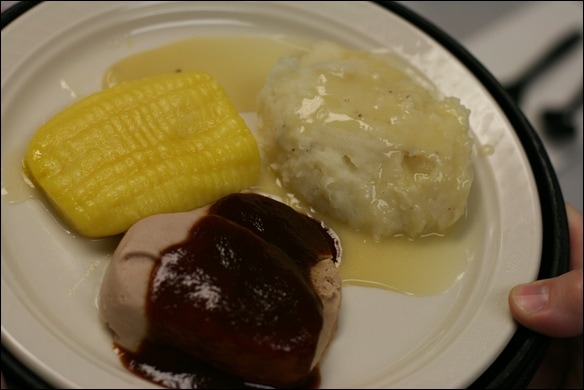 We also got some salad, fruit, etc. I was impressed with the food — UNC is doing a good job 🙂 I think this was my favorite of the internship hours so far because it was so interesting to get some hands on experience both in the kitchen and up on the patient floors!

I’m off to class — have a wonderful day, friends! 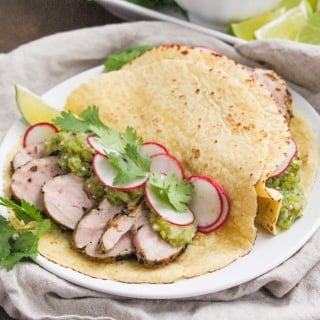 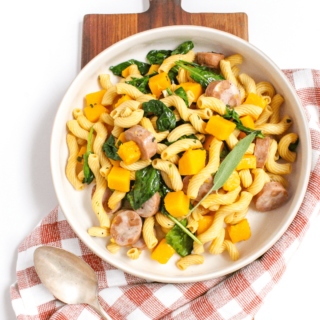 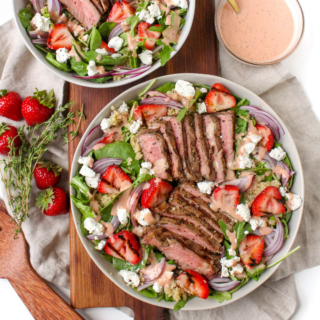 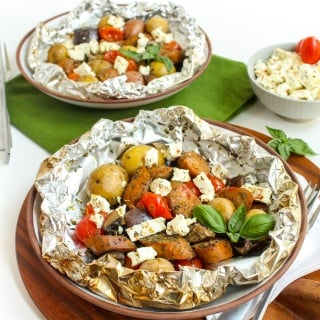