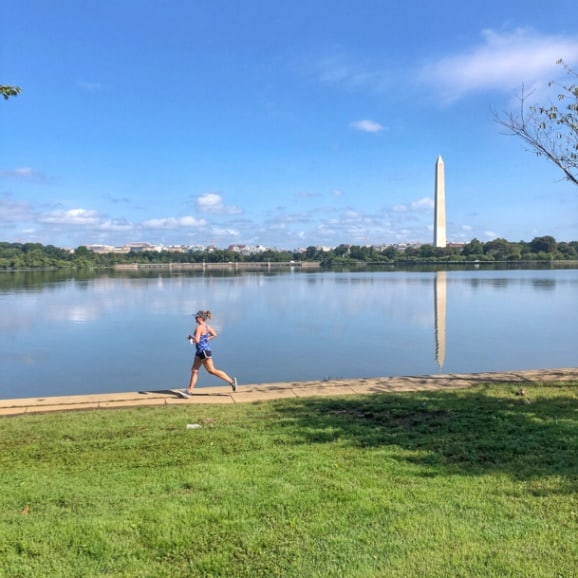 Hi guys! We spent the weekend soaking up the weather – three cheers for fall on its way!

Whenever it’s nice out we always fire up the grill, and this weekend was no exception. 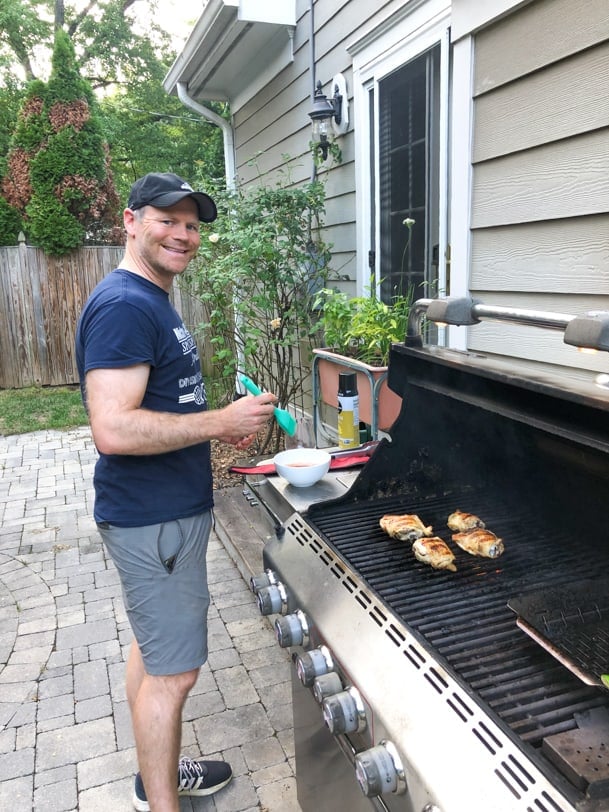 Matt helped me test out a watermelon glazed chicken recipe that I’ll be sharing on the blog in a couple weeks. Stay tuned – it was a really good one! 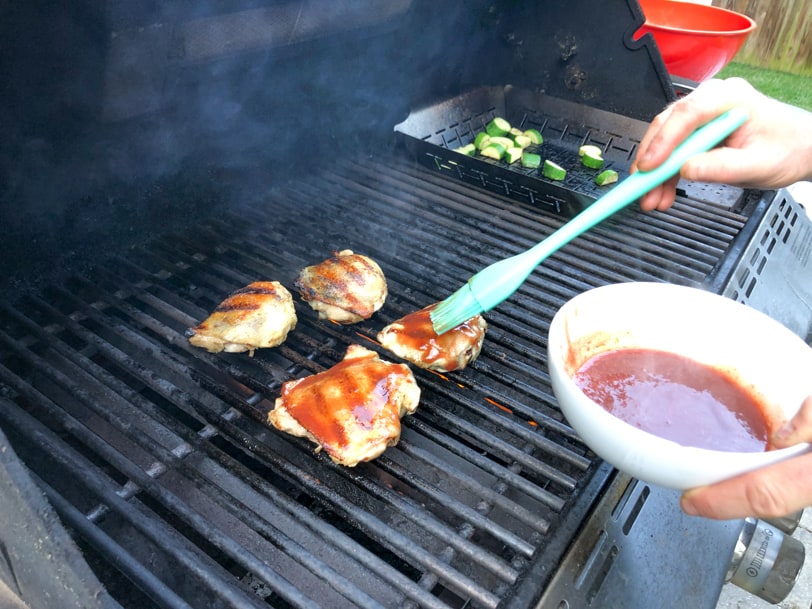 We had it with some grilled zucchini. 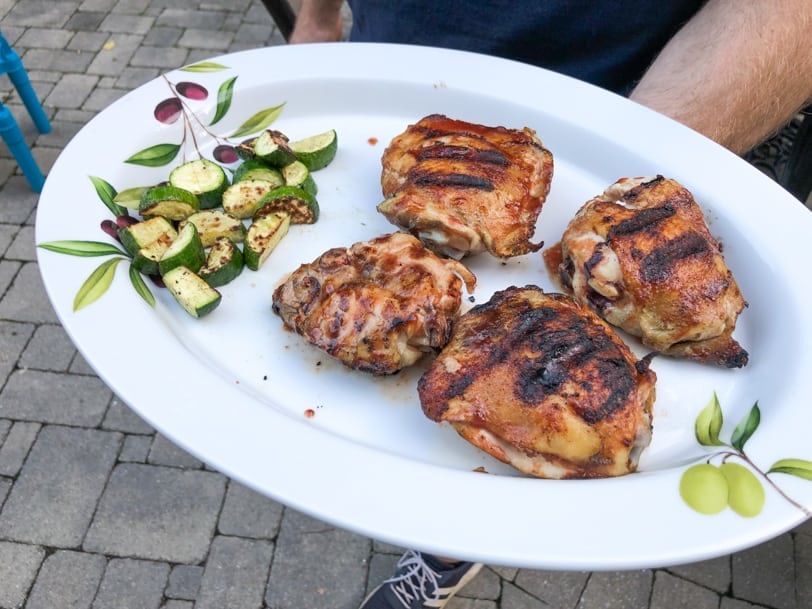 Plus some leftover rice (mixed with some seasonings and diced peppers, onion, string beans, and celery). 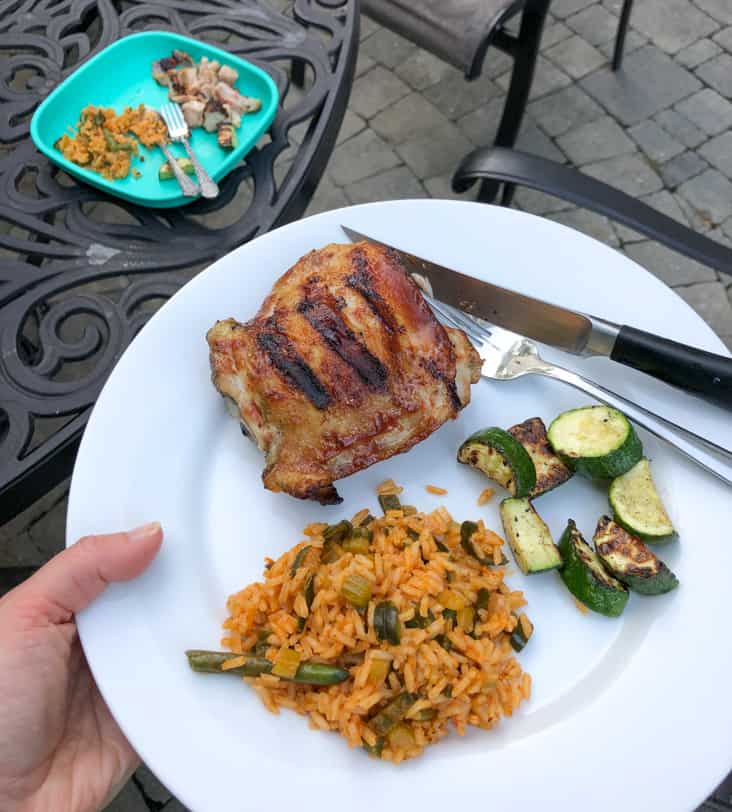 Other recent yummy eats include lots of sandwiches – this one had turkey, cheese, ham, pickles, mustard, and arugula. Plus some oranges, peppers, and cheddar snack mix we bought for Riese but are mostly eating ourselves because it’s so good… 😉 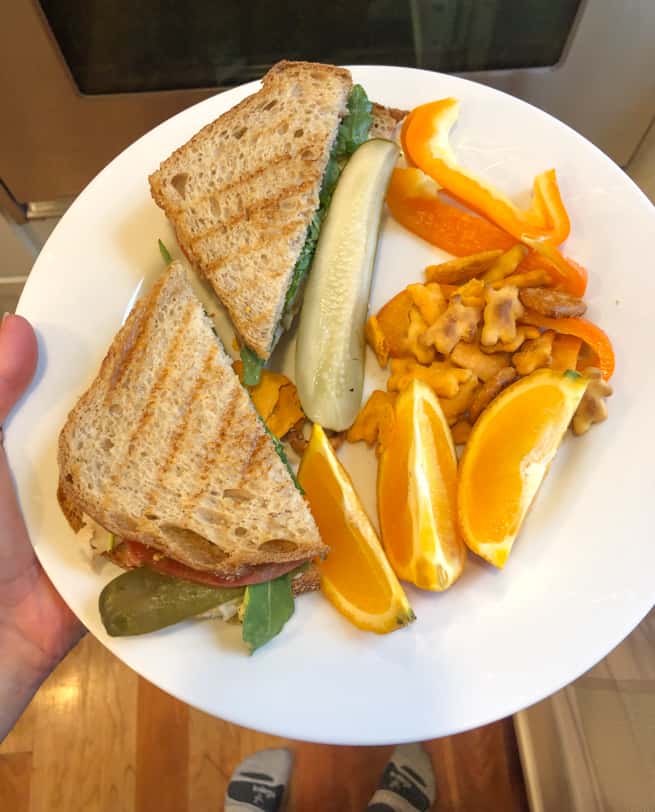 And we are still enjoying our usual favorite breakfast on repeat – an opened faced English muffin with cheese, ham, and fried eggs. 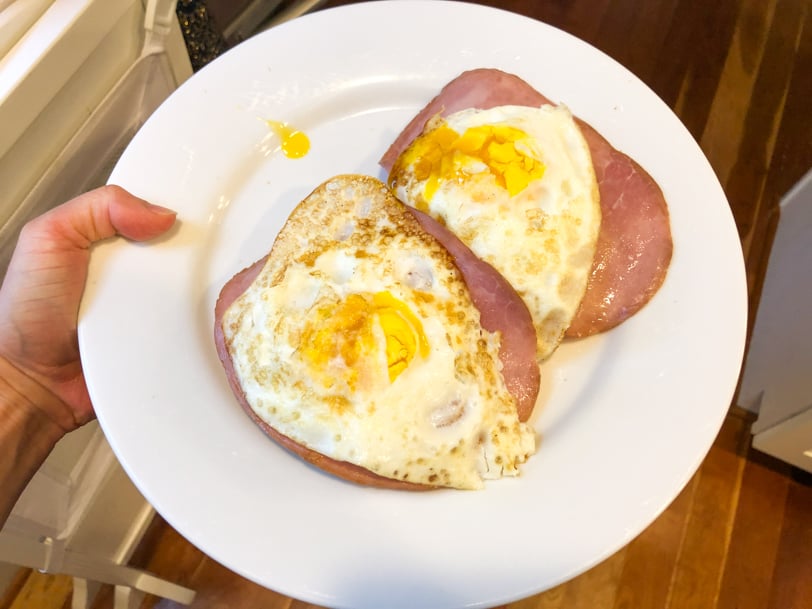 It was actually cool enough on Saturday that I was craving some soup for lunch! (And by cool I mean low 70’s, but it felt cool to me after how hot it has been…)

This was a random chicken noodle soup we had in the pantry but I amped it up with extra leftover grilled chicken, broccoli, and peas. Served with an iced green tea that you can just barely see because, you know, it’s not THAT cold out yet. 😉

Yes, I had hot soup and an iced drink, makes total sense. 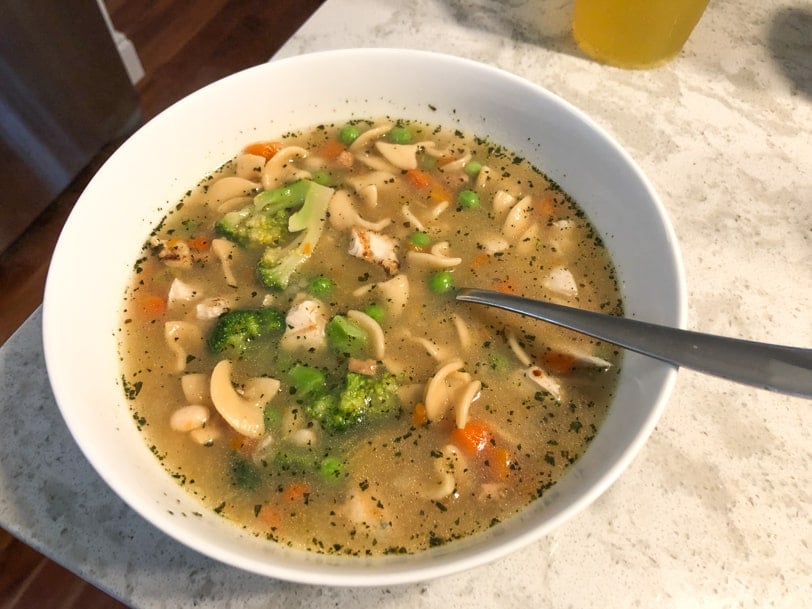 We also had a nice dinner at my parent’s place this weekend – steak with taco salad as usual! 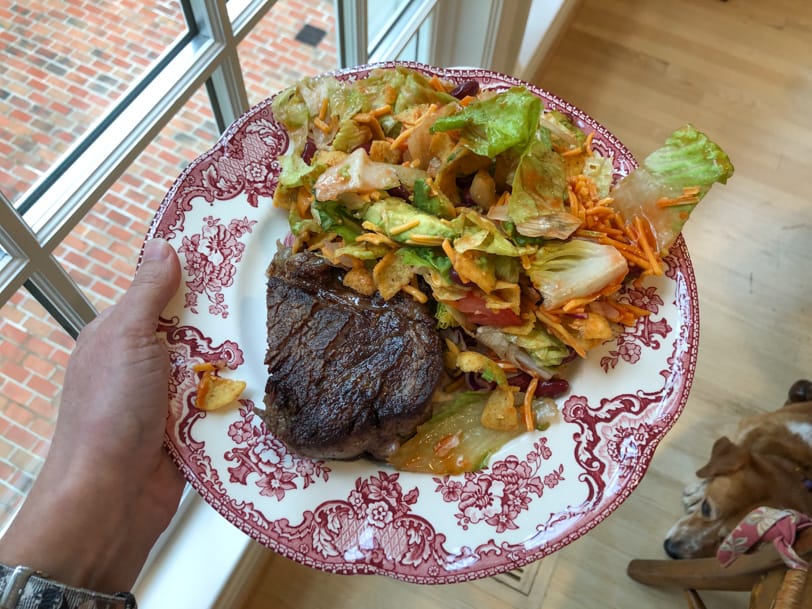 The last big highlight of the weekend was a run yesterday morning! It was absolutely gorgeous out and I ran down in DC proper for the first time since March. 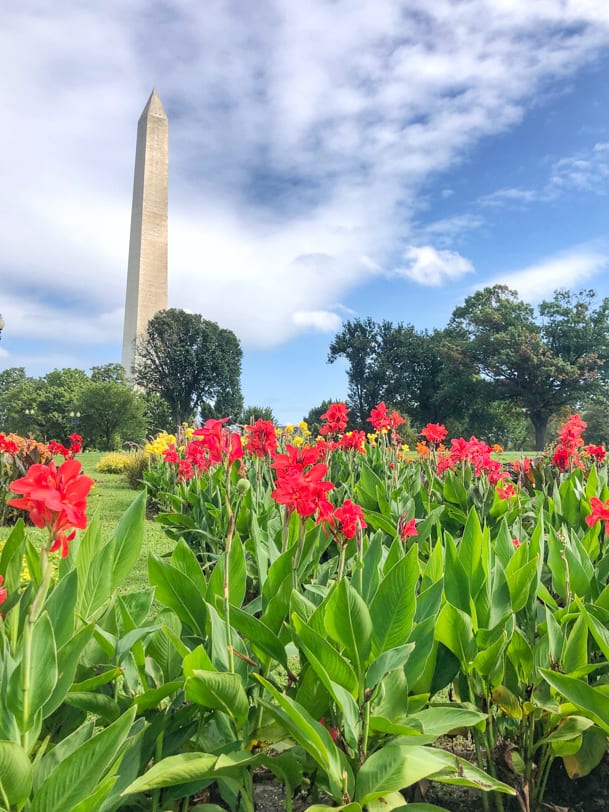 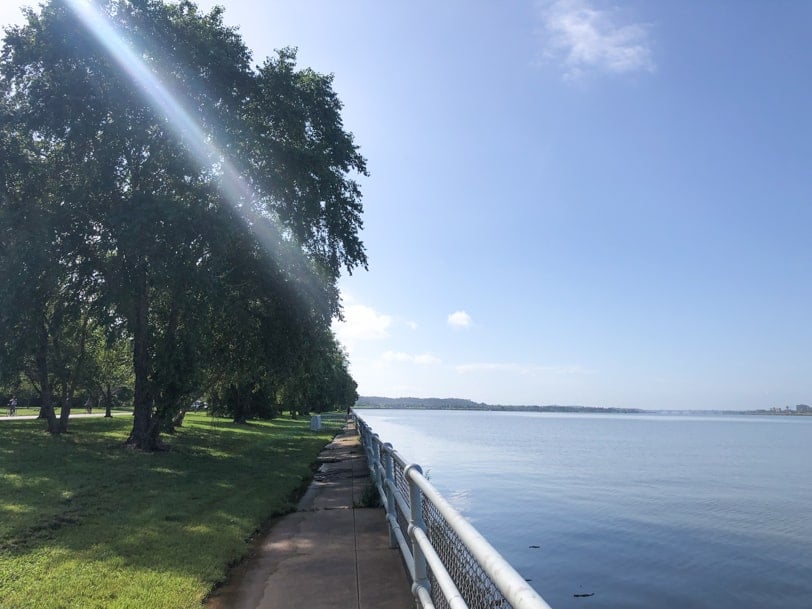 As was the Tidal Basin! 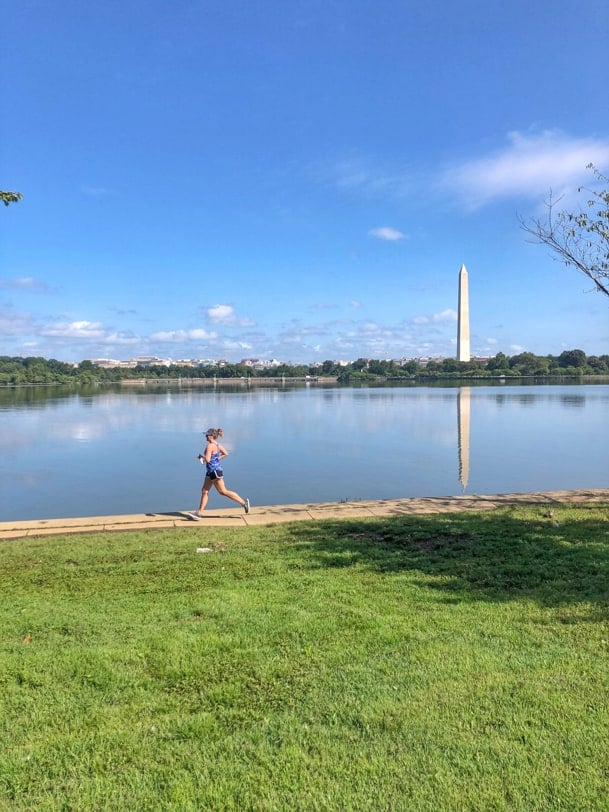 I was running with my friend Kathleen – we hadn’t seen each other in person since March, when we did our final long run (a 10 miler) for the DC Rock ‘n’ Roll Half Marathon that never happened! Womp, womp. 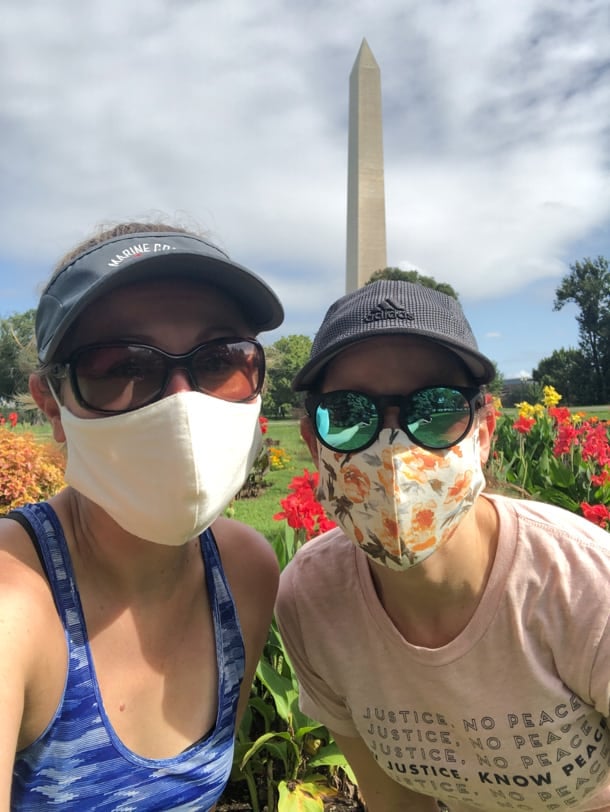 We’ve been doing virtual phone run dates and she also joins for my brother-in-law Drew’s live virtual boot camps every week, so we’ve stayed in touch but it’s no substitute for a real life hang out. So good to catch up with you girl!

We did 3.5 miles and then walked a bit which felt just right. I am definitely not in 10 mile running shape anymore these days, especially after the hot summer with not much running! No in-person running buddy motivation + hot, humid weather = no thanks. 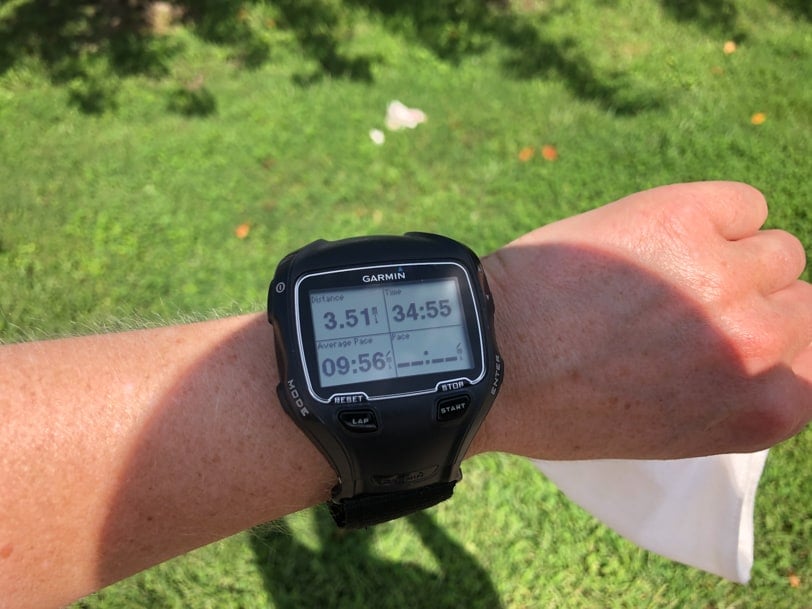 I hope you guys had nice weekends – I’m thinking of those of you out west dealing with the wildfires and hoping you are staying safe. <3 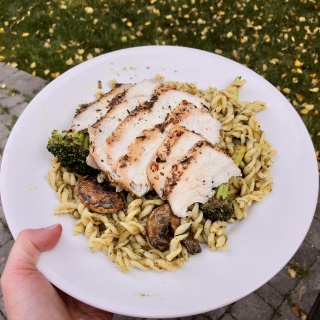 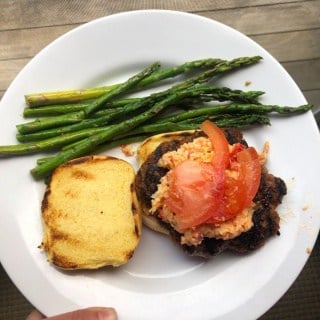 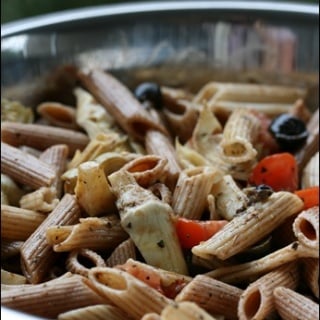