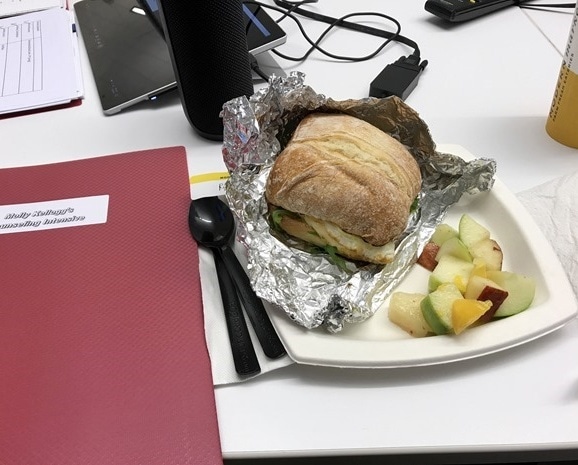 Hi guys! Monday already huh? This weekend was a really short and brief one for us because both Matt and I had to work for a large portion of it. Bummer, but gotta do what you gotta do!

On Friday and Saturday, I spent from 8:30 to 4:30 at an intensive two day counseling skills workshop up in Bethesda, MD. The workshop, hosted by dietitian and therapist Molly Kellogg, was all about using the Motivational Interviewing approach with clients. I’ve been on her email list enjoying her counseling tips for years so when I saw she was hosting one of her workshops here in the DC area, I figured it would be worth the investment! 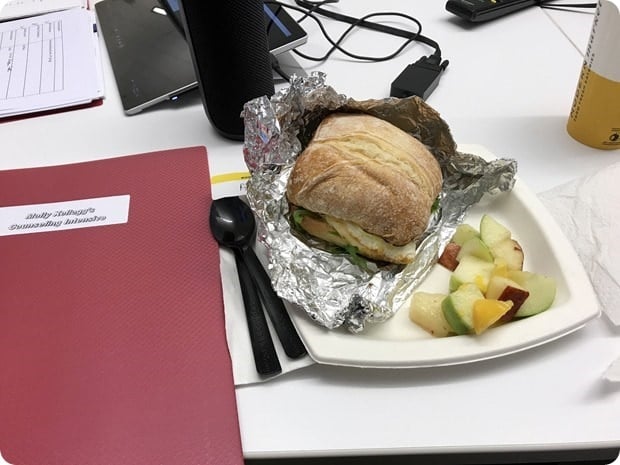 And it was! I already use Motivational Interviewing with my AnneTheRD nutrition private practice clients, but I know it’s helpful to brush up on and strengthen those skills frequently, and this course did just that. It gave me confidence that I’m already doing a lot of things well, and gave me some things to try to see if they make my sessions even stronger. It was also a lot of fun to network with fellow RDs, both local and from elsewhere – I met some cool new people!

We had those delicious egg sandwiches pictured above for breakfast both days of the workshop – the one I selected had egg, cheese, and arugula with a yummy herb sauce. I believe they were from Modern Market! On Friday, we had sandwiches for lunch (meh – I was not really in a sandwich mood – my pregnancy-fueled love affair with sandwiches is officially over, with the exception of breakfast egg sandwiches and egg salad/tuna salad sandwiches on occasion). I was also really craving some veggies and there weren’t really any available – oh well! Not every meal can be awesome and exactly what you want at that time, right? Those purple heirloom potato chips, however, were delicious. Must find these again! 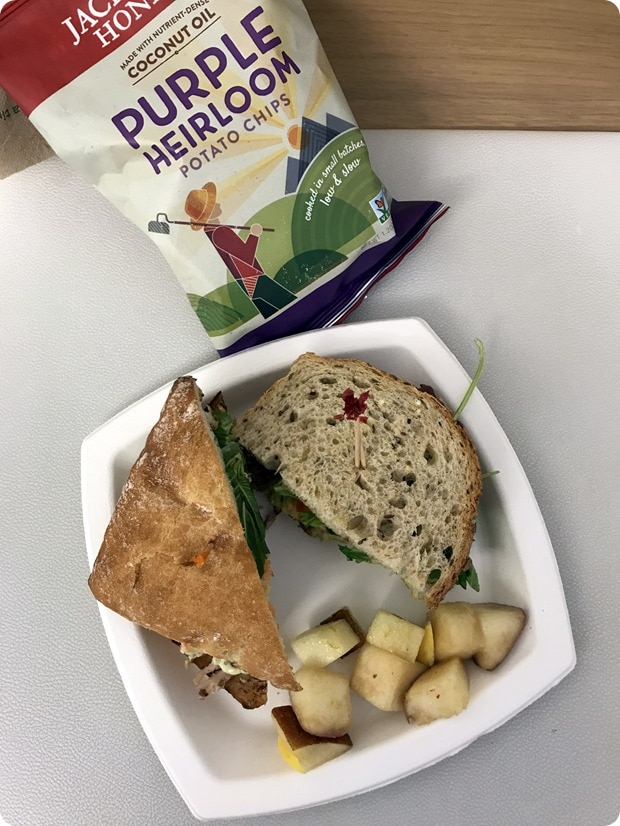 It took me ages to drive home on Friday night (it was POURING rain which didn’t help) and by the time I got back I was so wiped from a long day of being super engaged/checked in that I had some random leftovers for dinner and put myself to bed at 8:45 before Matt was even home from work. Party animal!

On Saturday, our workshop lunch was salads – yay! The one I chose had chicken, quinoa, strawberries, avocado, etc. – it was delicious and just what I wanted. I also got smarter this day and packed some string beans (I’m weird and love snacking on them plain) and carrots with me, just in case there were no veggies again, as well as lots more snack options because the day before I ended up too hungry by the time the workshop ended. In addition to the salad, I had a yummy oatmeal cranberry cookie, which I hadn’t been in the mood for the day before when it was also available, but sounded good this time so I went for it! 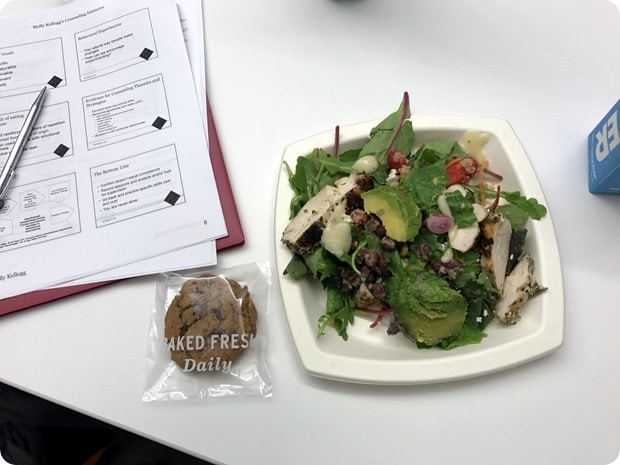 After the workshop closed out I headed to a goodbye party that was happening at a brewery nearby for some friends of ours! I showed up about an hour late and the workshop was nearby the brewery so I just met Matt there. I felt like I hadn’t seen him in ages since we missed each other the night before and that morning, too!

We were at Denizens Brewery in Silver Spring, MD – they had a yummy sounding menu with all sorts of creative salads and bowls, but I was really craving chicken fingers so I went for it. I got a salad on the side but I didn’t really like the dressing, so I ate some of Matt’s instead (he had a yummy kale grain bowl salad) and also shared a big plate of fries with some of the others. One of our friends was like, “Are you taking a photo of those chicken fingers for the blog?!” You better believe it! This blog is about being real, not perfect, my friends. Sometimes you just want chicken fingers and fries for dinner and that’s totally okay! Enjoy them, then move on. 🙂 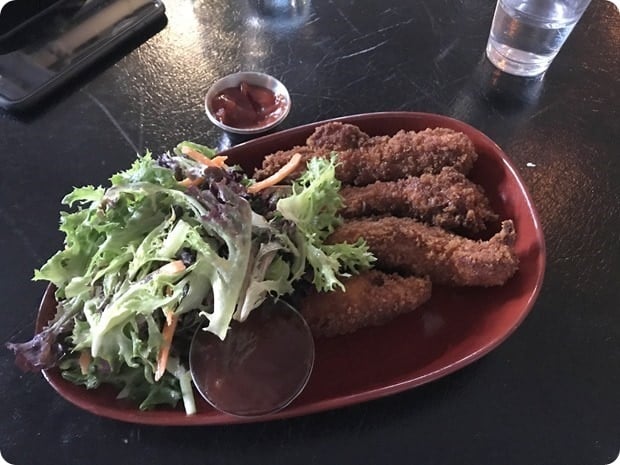 On Sunday, the rain had stopped and left us with gorgeous cool weather! I was up early to let the dogs out and made myself some microwave banana oatmeal to enjoy on the deck while they played. Topped with cottage cheese, berries, and slivered almonds. 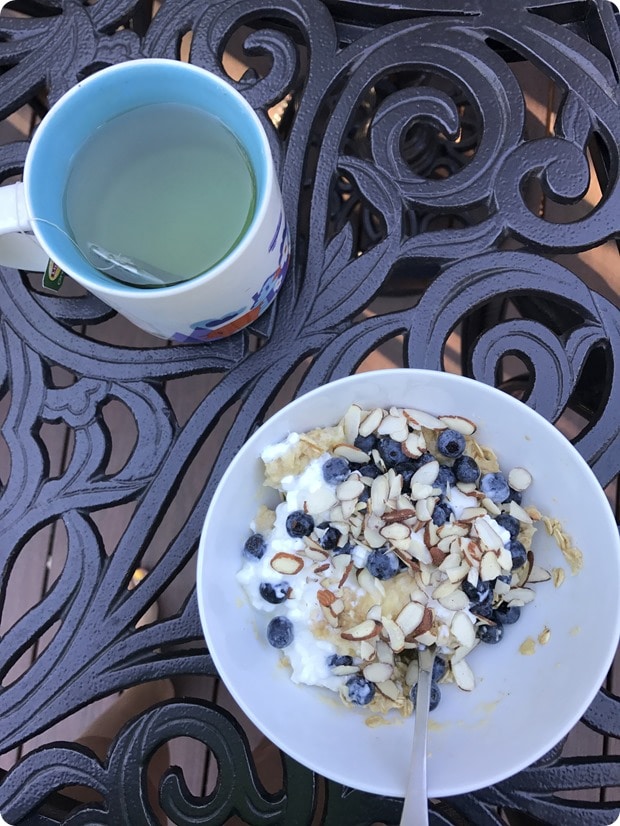 About an hour or so later and I prepared a little tray for the birthday boy! Sunday was Matt’s birthday, and per tradition we get breakfast in bed on our birthdays (and get to sleep in some, too)! He’s never super hungry first thing in the morning so I went with a simple toast (it was a paleo bread – he’s still mostly doing the gluten free thing for now for medical reasons) and some festive berries on top. 🙂 Plus coffee with cinnamon and frothed milk! 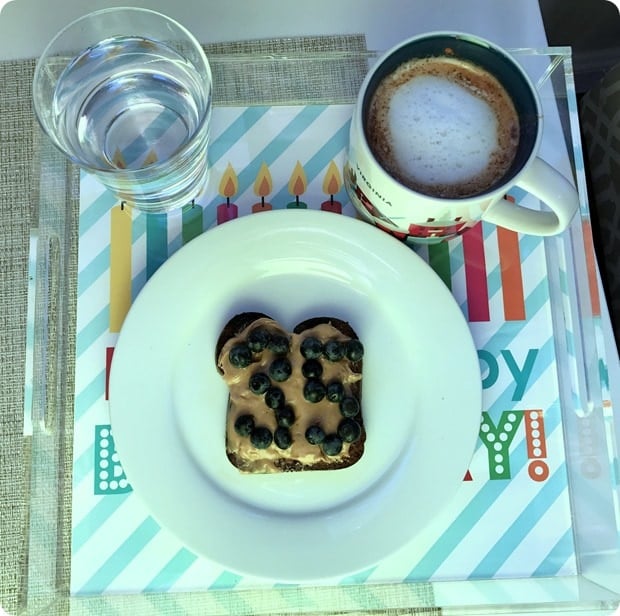 ALSO – while I was making breakfast for him, THIS HAPPENED! 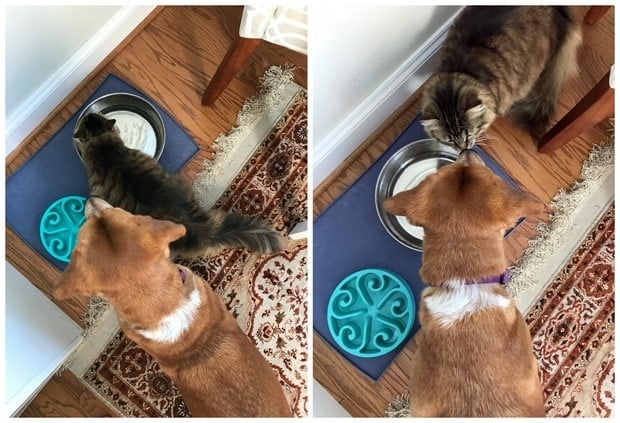 We are officially making some serious progress on the Zara (our cat) and Freyja (our new dog that we adopted from my brother) front! She used to chase her like crazy and get super riled up, but we’ve been working on giving her lots of treats with Zara close by, and having supervised interactions, and it has worked! Zara jumped down to drink out of the dog’s water bowl (she loves doing this for some reason) and Freyja was intrigued but let her do it and just watched. Then, they smelled each other and everyone moved on. Hooray! (Ashe, our puppy, could care less about Zara – she basically ignores her.)

Since it was so nice out, after breakfast Matt requested a birthday hike with me and the dogs, so we hit up one of our favorite Potomac trails nearby in Virginia! 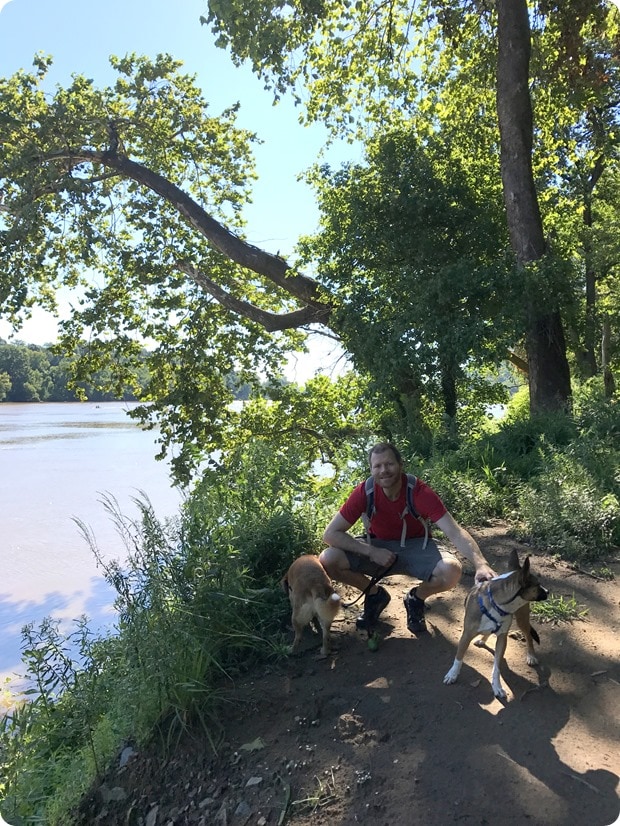 Sooo nice out. We were surprised there weren’t more people out there – maybe because we were out on the earlier side?! 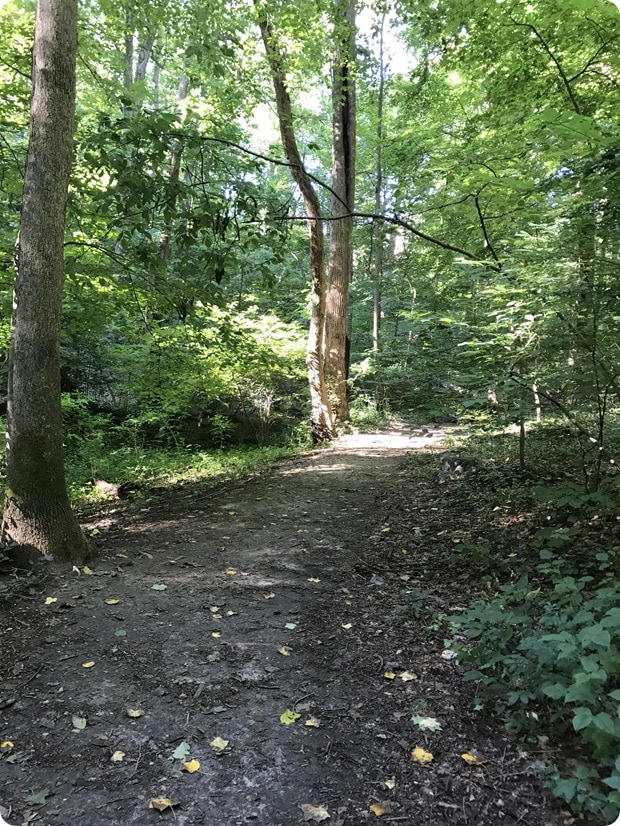 Freyja is obsessed with sitting down in the water – must feel nice and refreshing! 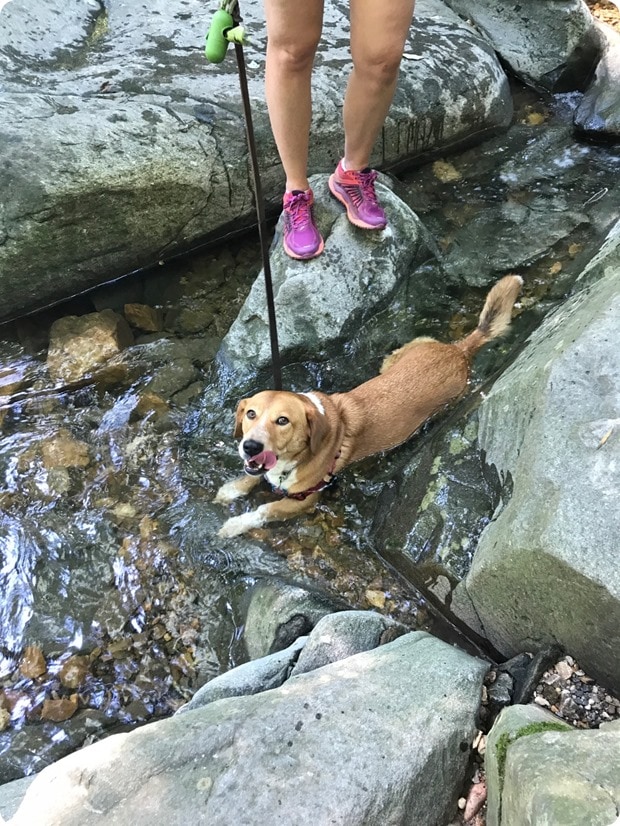 Unfortunately when we got back Matt had to head to the office for the rest of the day – boo! His team has a big deadline today so everyone was working a lot of the weekend (he was working some on Saturday, too, but from home). Bummer to have to work on your birthday!

I was feeling a bit blah yesterday – taking on two dogs (one of whom is a very rambunctious puppy) while dealing with pregnancy hormones has been… a lot, especially since we have had some challenges/misadventures with both of them lately. It’s been especially hard since I haven’t had my #1 stress outlet, running with friends, to rely on to decompress, and I haven’t been able to get as much sleep as I need either since they wake us up a lot. I knew sitting all day on Friday and Saturday and not getting much movement was not helping the stress situation, and my body was feeling REALLY stiff and sore (my hips are starting to ache some now), so I decided to pick myself up and go to the pool for a swim. It ended up feeling really good – I just did the indoor pool since it’s close and easy and we don’t have access to a great outdoor pool with lap lanes (I’ve tried the one public one in the area, but there are kids in the lap lanes horsing around half the time so it’s more stress than it’s worth). I’m feeling less stiff today, so yay! I think it helped. I need to keep swimming in the routine at least once per week – it makes me feel so much better physically as I progress in the pregnancy!

Matt got home in time for a late dinner to close out his birthday celebrations! I made us reservations at Rays the Steaks, one of his local faves for special occasions. All dolled up! 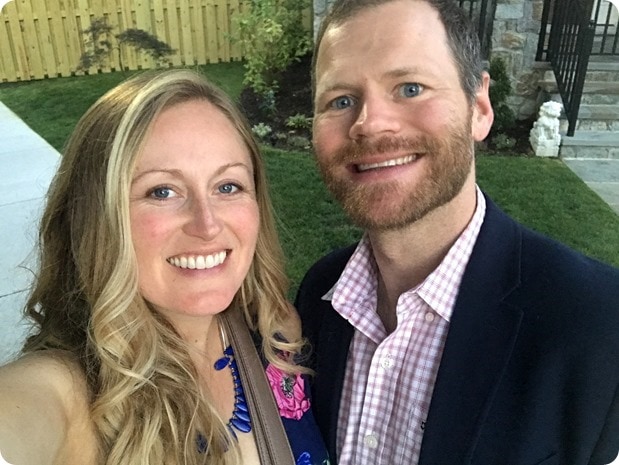 It was delicious! We shared a salad to start as well as the bacon wrapped scallops (the salads were delicious, the scallops were just OK – a bit too salty), and then we both got filet mignon for our main course. We also got some unpictured sauteed mushrooms to put on top – mushrooms are so good with steak! And each steak comes with mashed potatoes and creamed spinach. 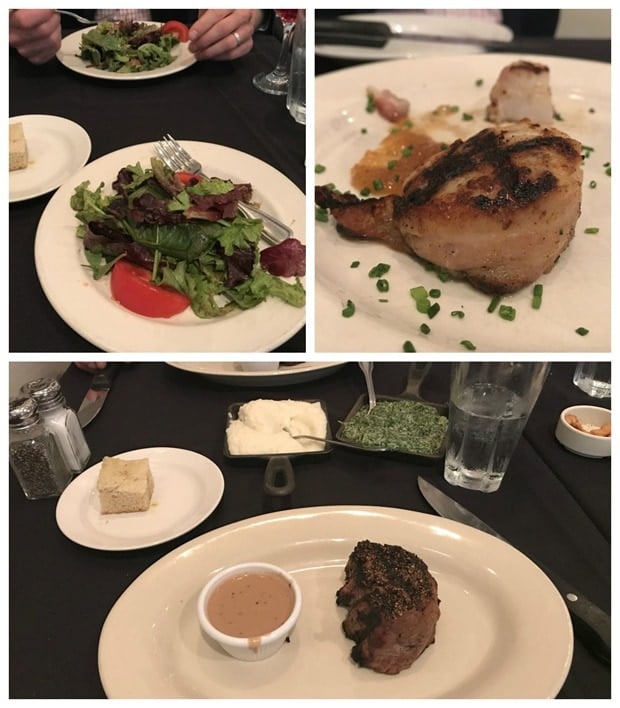 We hadn’t gone out to dinner just the two of us in awhile so it was a really nice treat. 🙂

I’m working downtown today and have a mile long to do list – I got behind on everything on Friday since I was out of the office all day! Better get to it. Have a good one guys! 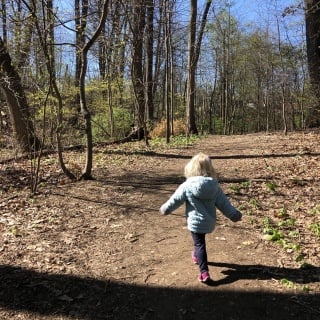 Up and Down Week 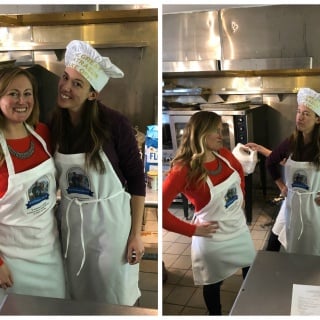 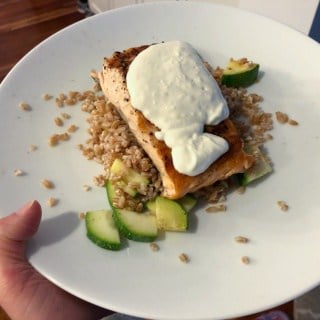 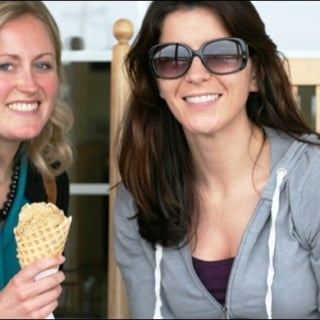