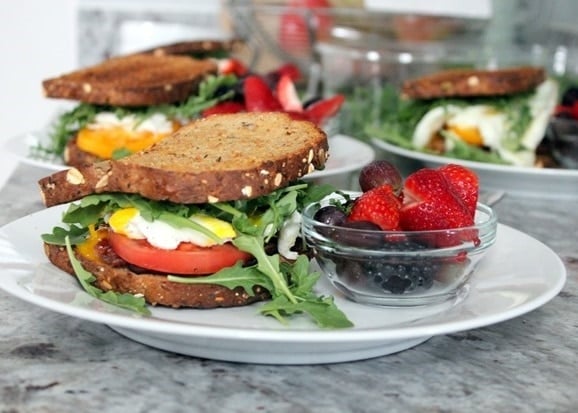 Hi guys! Let’s kick off the weekend recap with some brunch photos, shall we? Matt and I had my grad school friend Steph and her husband Tom over for brunch at our place on Saturday. Matt whipped up some epic BLT egg sandwiches for everyone to enjoy – they were so good.

Plus extra bacon on the side, fruit cups, and mimosas! Party! Compliments to the chef. 🙂 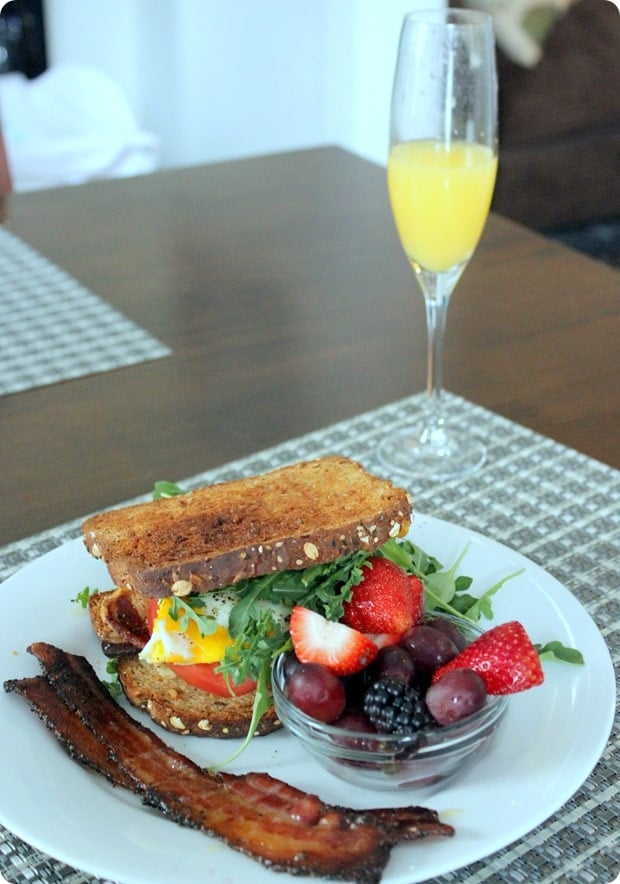 So fun to catch up with our friends! They have a newborn as well – their daughter is 11 weeks old – and we loved meeting her! She enjoyed snoozing in Riese’s Rock ‘n’ Play while we hung out and ate, which worked out well because Riese never uses it – she always wants to be held/in the action.

Other food highlights from the weekend included the return of one of my other favorite breakfasts, which is toast + cottage cheese + smoked salmon + tomato + arugula. It sounds weird, but it’s basically a variation on the standard bagel + cream cheese + lox. Try it! 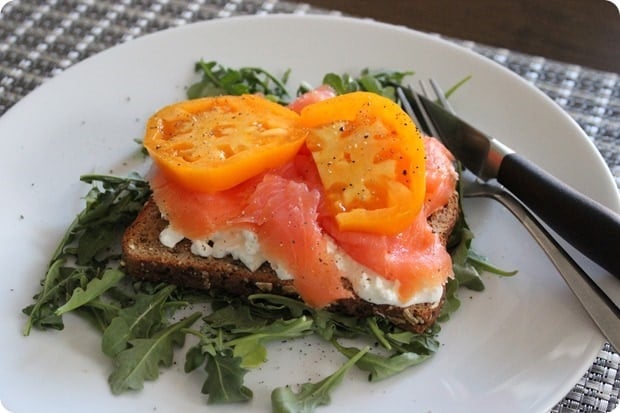 Another yummy meal was a huge piece of leftover pizza (we ordered pizza on Friday night and had a cozy night in) for lunch one day with a bunch of veggie volume on the side. Veggies make all meals more satisfying! 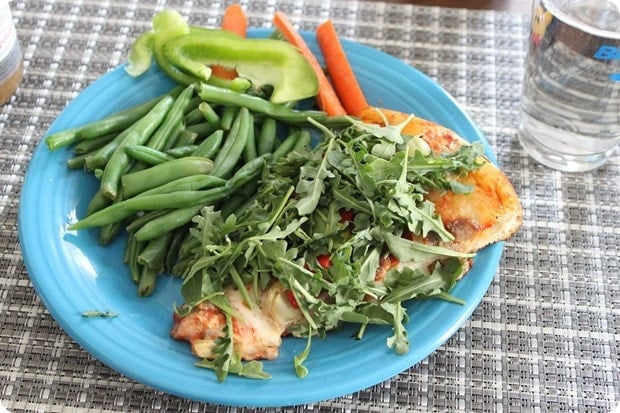 We also had a really good Blue Apron salmon one night – the side was freekeh (young green wheat that has been toasted and cracked – kind of like bulgur wheat) with zucchini, which was a yummy combo. It had a little lemon and olive oil but was pretty simple! Have you guys tried freekeh? 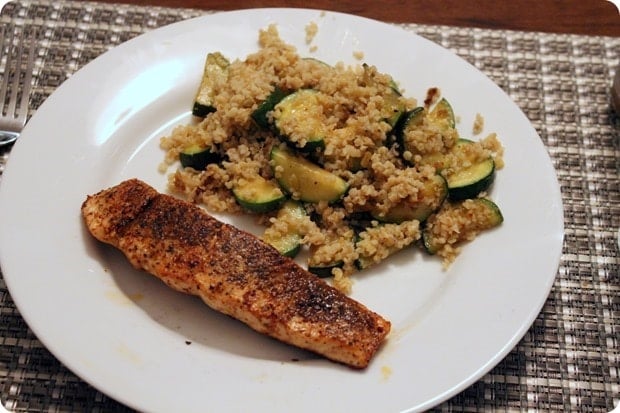 We also got in lots of walks this weekend! The weather was great yesterday so Matt and I took Riese and Freyja the dog out on a nice long afternoon adventure. Riese took in the sights for the first half and then snoozed for awhile – she loves sleeping in the stroller, but only if it’s moving – if we stop for more than a few minutes she almost always wakes up. (In the car, red lights are the WORST… I get so stressed out when we have to stop because she almost always wakes up and starts crying.) 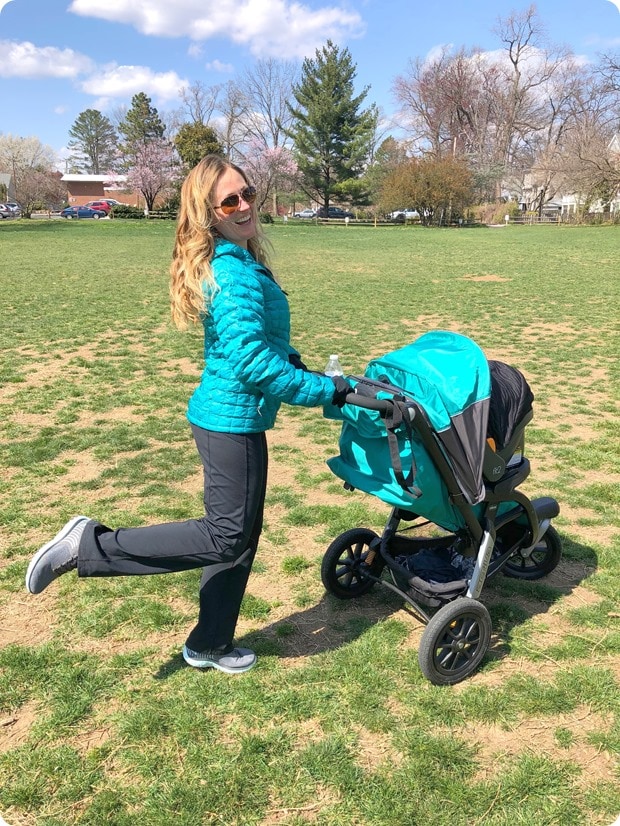 I also had a nice walk on Saturday with Roxanne, my brother’s fiance (yes, they got engaged recently – so exciting!!). She was in town to see some friends so before she headed out on the town she came over to hang out and the two of us took Riese out for a little stroll. It was cold on Saturday so we all bundled up. 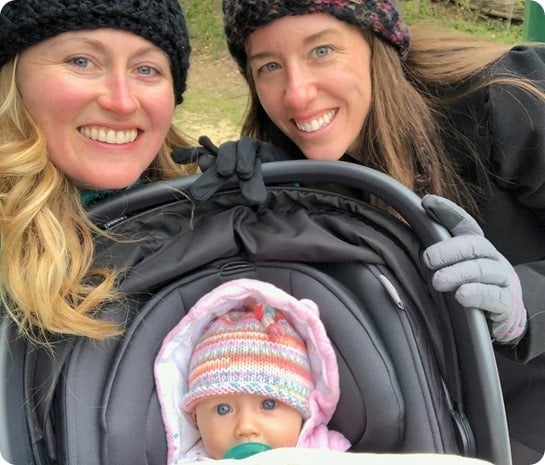 It looks like after today the rest of this week is going to be lovely – hooray for spring! Also, thank you to those of you who recommended getting a sun hat for Riese (apparently sunscreen before about 6 months isn’t recommended, so sun hats are the way to go for now) – in addition to keeping the sun off her face, it’s also insanely cute. Obsessed! I bought her two – this one (pictured below… love that pattern) and another one where the back is soft and stroller-friendly, but the front is more sturdy and won’t flop in her face. 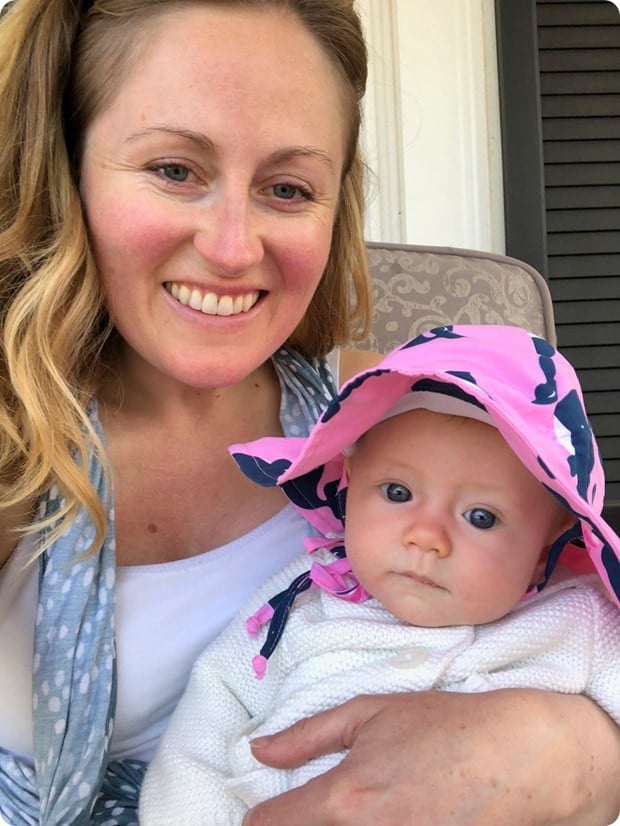 Time to tackle my to do list and hop on the phone for some AnneTheRD nutrition client calls. Have a nice day guys!

p.s. Did any of you run the Cherry Blossom 10 Miler (<- my recap from last year) yesterday? How did it go? This was my first year missing it in awhile… great racing weather for those of you who were out there, and so awesome that the cherry blossoms were actually out during the race this year too! 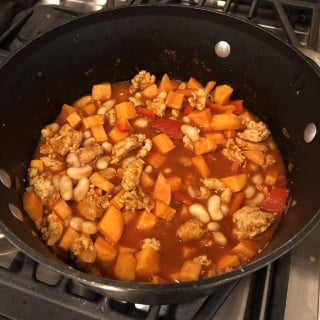 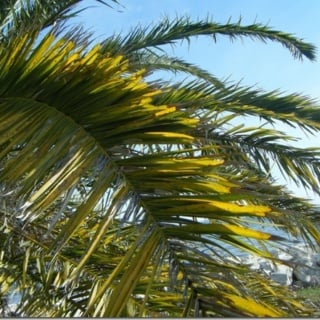 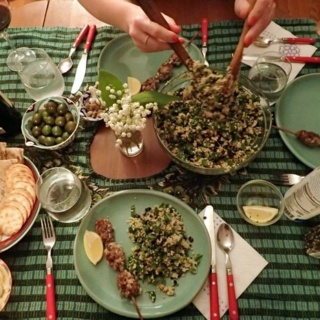 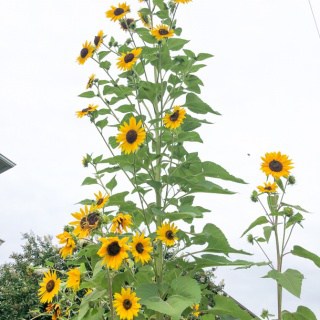