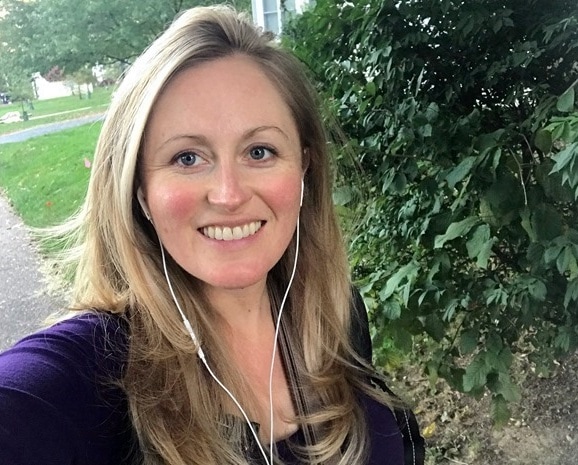 I kicked off the weekend a little early with a Friday afternoon haircut! My hair was out of control and I know that once the baby comes it will be hard to get out for stuff like this for awhile… glad to have it checked off the list, and my head feeling lighter. 🙂 I always put off haircuts forever! 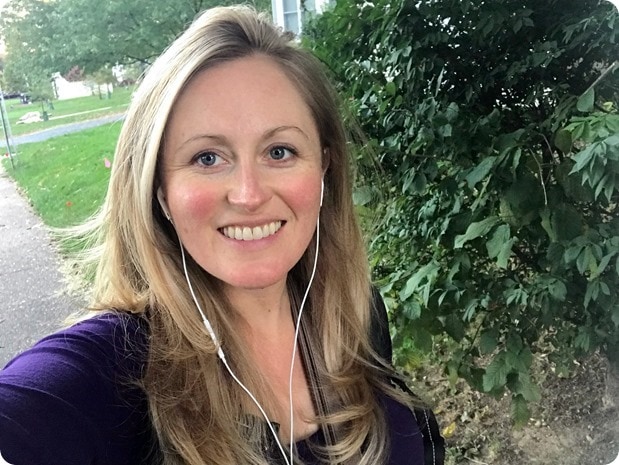 Matt and I grabbed dinner on Friday with my uncle Tim who was in town for work and stuck around an extra couple days to see family! Great to catch up with him over some Thai food – we hit up Sawatdee, our local fave. Matt and I are obsessed with their summer rolls (on left below) – the sauce is amazing. (Remember when Matt and I re-created these at home back in 2010 as part of a blogger challenge?! We look like babies and wow my hair used to be short back then!)

On Saturday fall finally arrived in DC! Hooray!! I always love fall, but the arrival of fall weather this year is especially exciting because it means we are closer to getting to meet our fall baby. 🙂 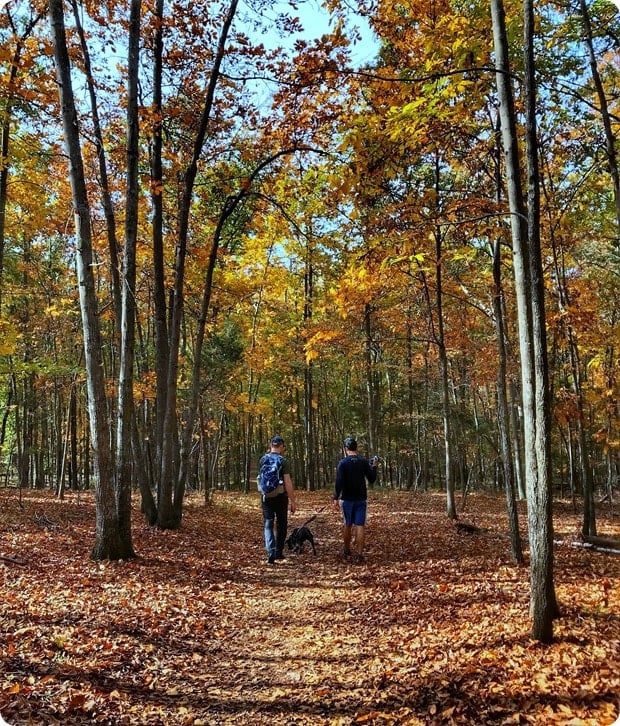 Matt and I met up with our friends Heather and Mike out at Manassas Battlefield Park – there are a ton of trails there and they are dog friendly which is also nice. It was great to catch up with them over some fresh air and movement, and to explore a new spot! The trails were also all pretty flat, which was appreciated at this point in my pregnancy!

We played “spot the bump” 😉 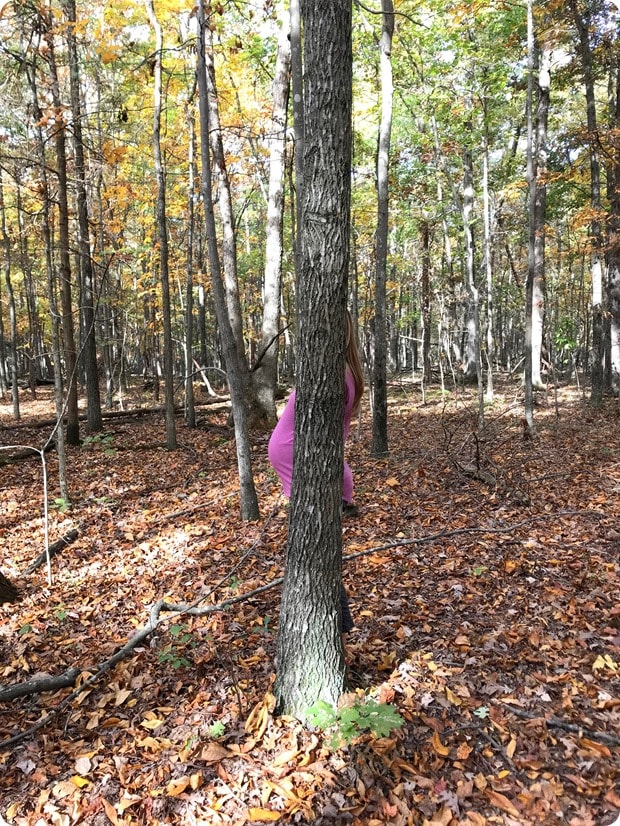 And “bump touch.” 🙂 It has been really fun to share this pregnancy journey with my good friend! Heather is due in January – just 8 weeks behind us! 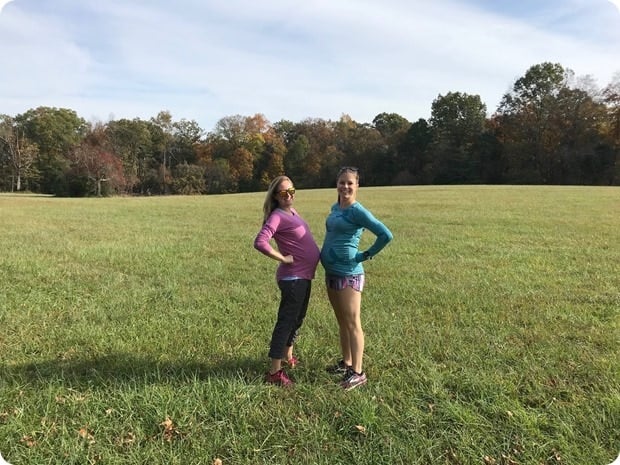 Post-hike Matt and I met up with our friend Shane for some brunch – a cheesy egg and mushroom quesadilla (plus a side of bacon that arrived after I took this photo, and bites of Matt’s french toast) hit the spot: 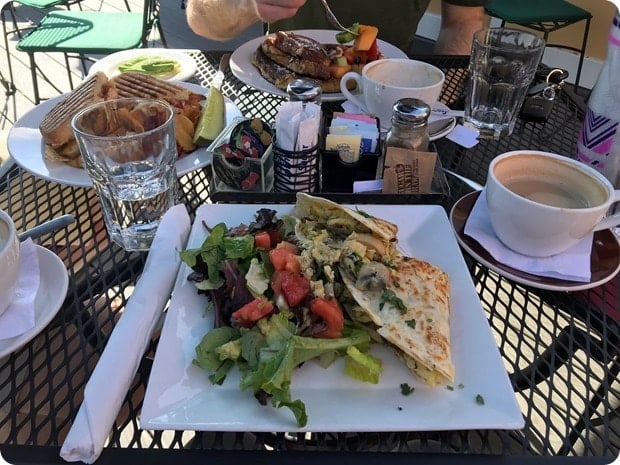 And then we geared up for a fun adventure: carving watermelons! Yes, you read that right – watermelons, not pumpkins! 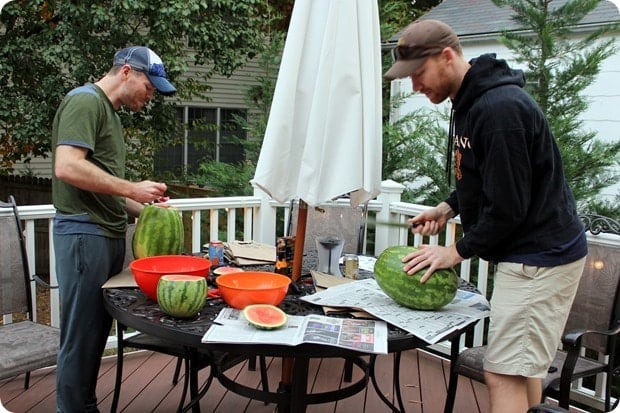 As you guys know, I’m continuing my partnership with the Watermelon Board this year, and they challenged us to mix it up and carve watermelons this year instead of pumpkins. Considering watermelon has been my #1 favorite pregnancy food that has NEVER been off-putting, and that carving a watermelon instead of a pumpkin means you get to eat the delicious inside… clearly we were up for the challenge. 🙂 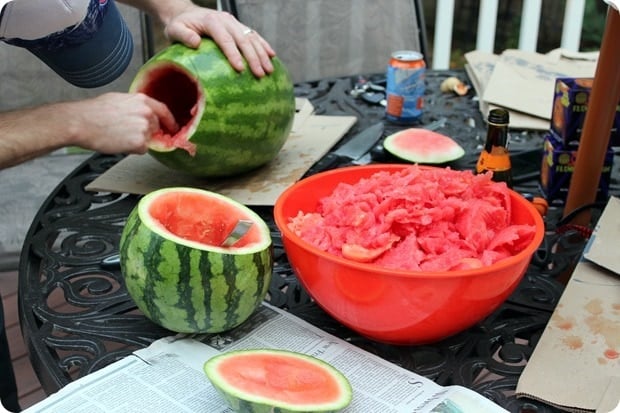 Carving a watermelon was surprisingly easy – you cut off the top like you would a pumpkin, and then use a big spoon or an ice cream scoop to take out the tasty watermelon inside. We put ours in a huge bowl that we could snack on while working and then save for later in the fridge, and we had another big bowl for the juice, which I’ve been enjoying drinking! (Shane preferred to drink his right from the watermelon, as you can see in his photobomb below – lol!) 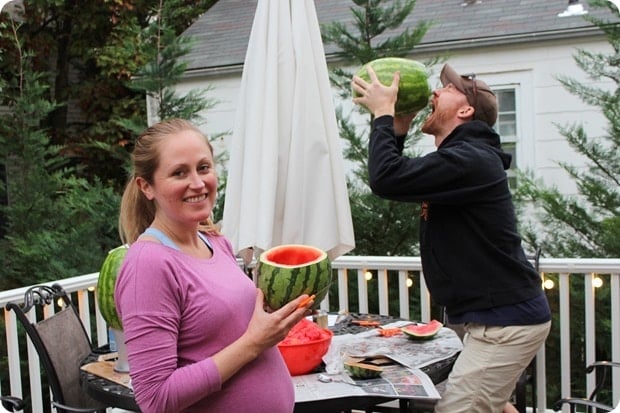 We used a pumpkin carving kit for the carving purposes, but you can also use regular knives. Carving a watermelon was actually easier than a pumpkin – it wasn’t as hard to cut through it! 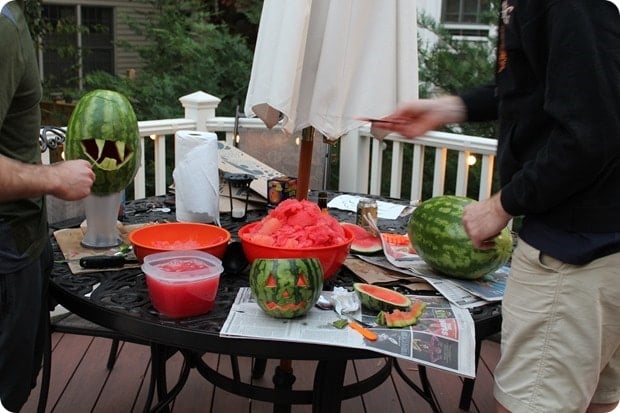 So fun. Rather than using a template we just winged it – I carved a mini watermelon and the guys carved big ones. They came out great! 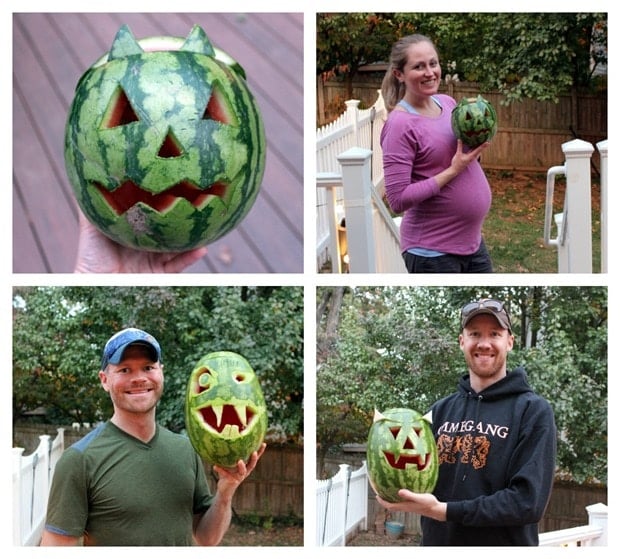 I got the idea for the little ears on mine (held in place with toothpicks) from a fun Facebook live video the Watermelon Board did about how to carve watermelons. 🙂

Matt always gets so creative with stuff like this – isn’t his cool? He skimmed off a bit of the skin which made it look really neat when lit up. 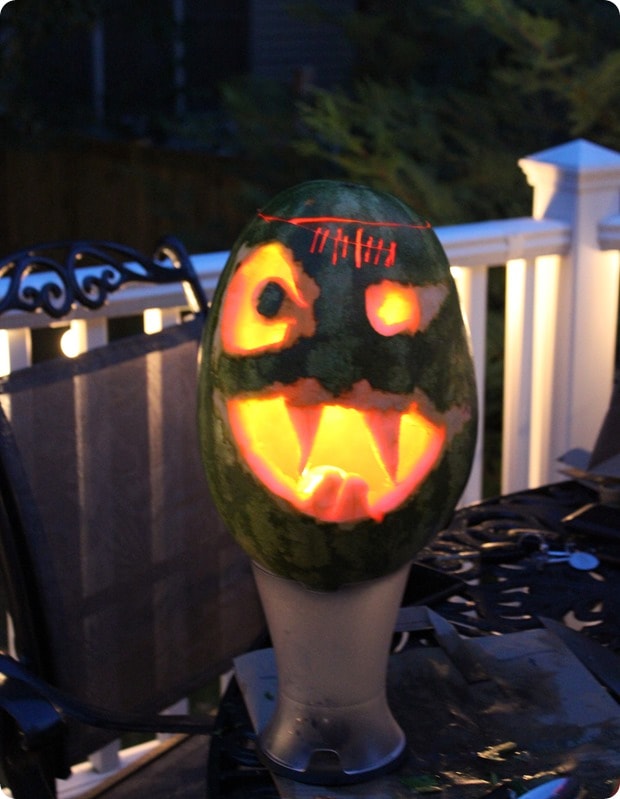 Our masterpieces all together! 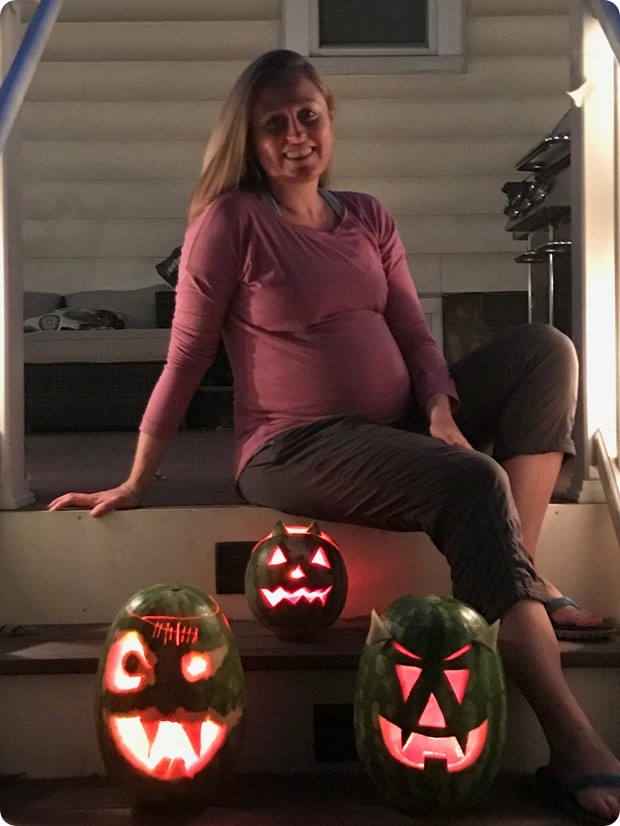 We spent the rest of the night hanging out on the deck – Matt whipped up some awesome burgers on the grill for us (topped with avocado, tomato, bacon, and sauteed mushrooms) plus roasted asparagus. Yum. Food and I are still having a tough time this pregnancy, but at least burgers always hit the spot! Shane and I agreed this one was restaurant quality! 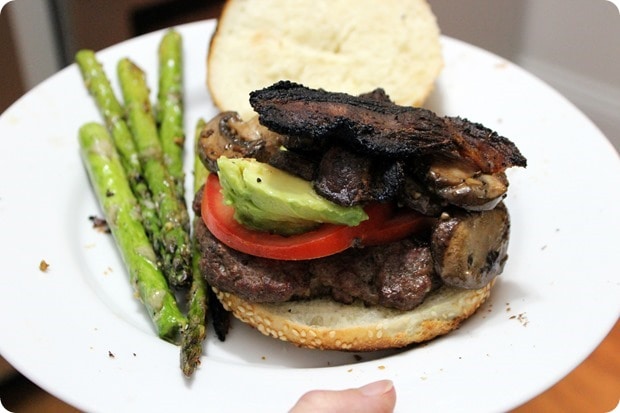 On Sunday, it was rainy but I had a perfect rainy-day morning plan: a prenatal yoga class at Blue Nectar Yoga in Falls Church (via ClassPass <- affiliate link for $40 off). This was only my 3rd prenatal yoga class as the first two I tried ages ago weren’t really my faves (one was at Blue Nectar but on a Saturday a few months ago, and we were smushed in a tiny room and the instructor was okay but not amazing; the other was at Journey Yoga and I really didn’t like the instructor – super bossy and opinionated about all things pregnancy). But, I’m getting to the point where normal yoga is getting pretty awkward and requiring a lot of modifications, so I figured I’d give it another shot. And what do you know – I LOVED this class! 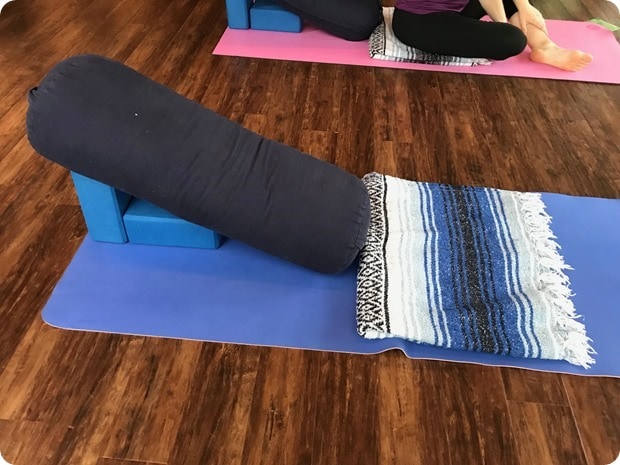 We were in the big, spacious room at the studio which was nice, and I liked that we were facing forward like a normal yoga class vs. facing each other, which I find kind of distracting. The instructor was also great – really kind and positive with uplifting and non-judgmental messaging, and I loved that the class was an actual flow. The other classes I tried felt really disjointed in the sense that we’d be doing random squats, then something else random, etc. – it didn’t feel calming in the way that I look for in yoga, you know? Anyway – it’s too bad I found this instructor so late in the game, but I’ll definitely go again so long as the baby doesn’t arrive early.

Post-yoga I headed to my track buddy Diane’s house for brunch! I didn’t get any photos because I was busy chowing down and catching up with her, her husband, and our other running buddy Josh, but it was SO fun. I really miss seeing them multiple times a week for track workouts and our long run dates! Josh just ran MCM and Diane is running Richmond in a few weeks… it will be great to get back out there with them in a few months, hopefully!

Matt and I spent the rest of the day doing stuff around the house – still lots of baby-related stuff on our to do list! I was going to pack my hospital bag, but I ended up being really tired after doing some of the other to do list items and we decided watching some Netflix and relaxing was a better idea. I’m working from home today, though, so hoping to pack it later this afternoon once work is wrapped up – the baby could basically come any day now!

I also have my appointment with the turning specialist doctor later today, as well as a prenatal chiro appt… I’ll keep you guys updated! (More info in Friday’s post – thanks for the breech turning tips and related advice!)

Have you ever tried carving a watermelon? 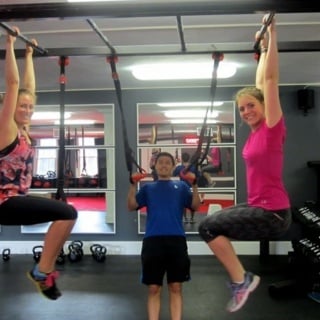 How to Get Over Jet Lag Quickly 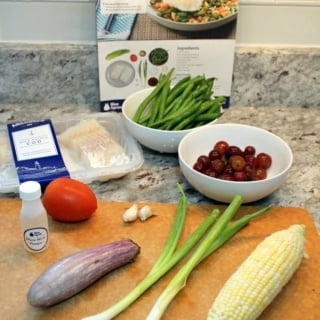 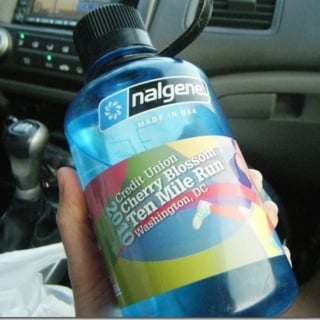