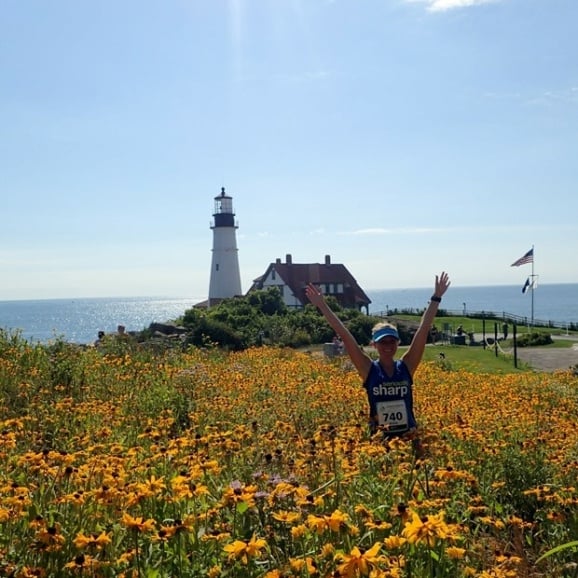 On Saturday, at the Beach to Beacon 10k in Maine, I set my first new running PR (personal record) since 2013!! 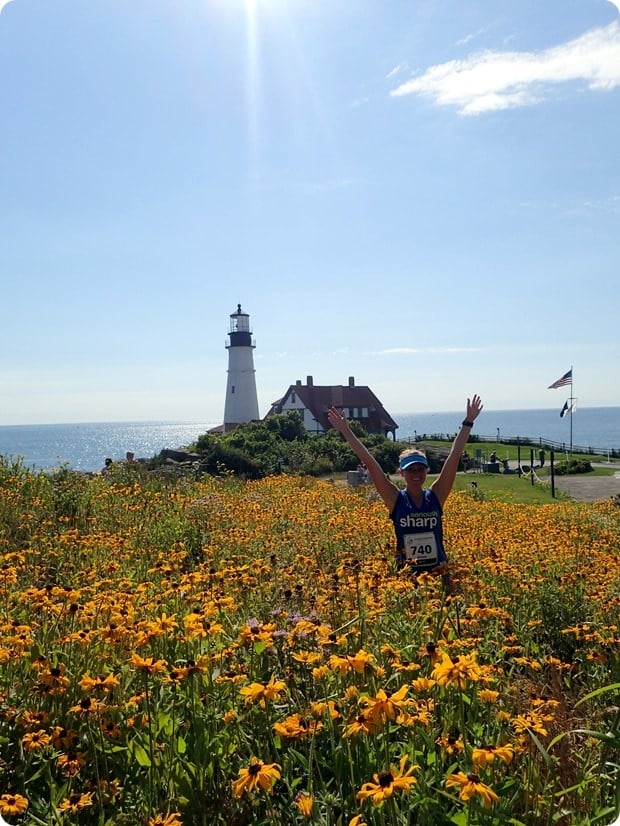 I was in Maine for the race as a guest of Cabot, along with my fellow Cabot Fit Team members. (Read more about the trip and my fellow Cabot Fit teammates in my first weekend recap!) I’m so honored to have had the chance to run this iconic race for the second time (I ran it in 2013 as part of the Cabot Fit Team, too). I know just how popular and coveted the mere 6,000 bibs available for Beach to Beacon are, and I’m so grateful to have received one of them! A HUGE thank you to Cabot for having me this weekend and for covering my accommodation and flight expenses, too.

We were up bright and early the morning of the race; the staff at the Higgins Beach Inn, where Cabot put us up again this year, was kind enough to get up early to provide a pre-race breakfast for us. (I had some toast with peanut butter and sliced banana, plus a hard boiled egg.) Here we are on the front steps, fueled up and ready to go! 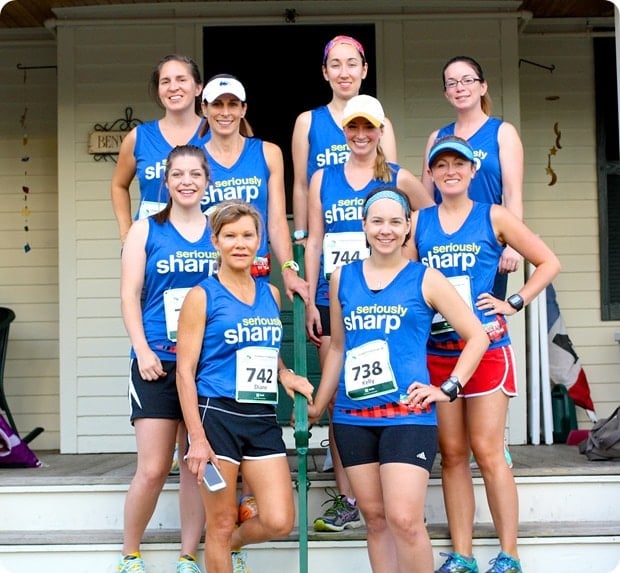 We arrived at the race starting area with about 90 minutes to spare – better super early than late, right?! We had time to take some pics and hit the porta potties twice. Aren’t our seriously sharp race shirts cute? 🙂 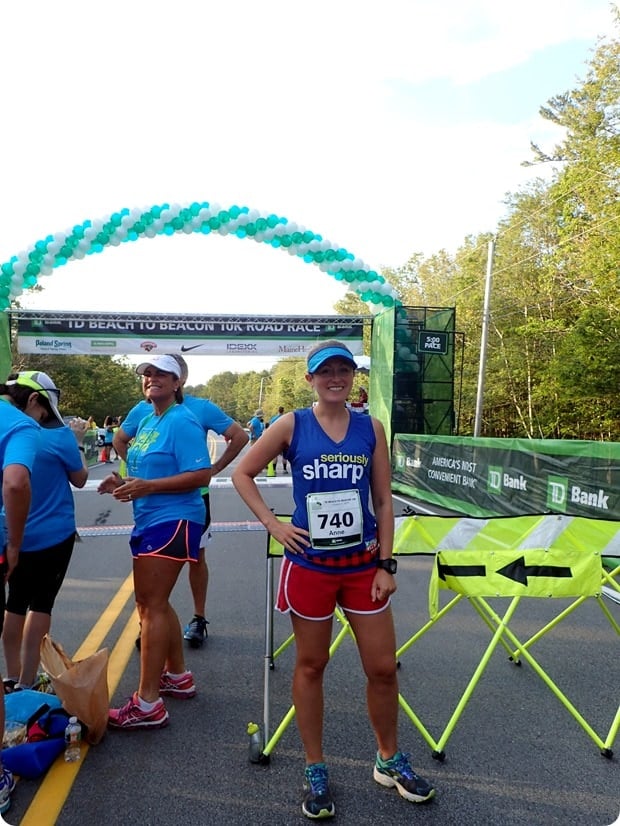 About 30 minutes before the start of the race, I said goodbye to the other girls and lined up in my corral. Ironically, my race bib number, 740, was also roughly the pace I was looking to keep up, so I lined up in between the 7 and 8 minute mile pace areas. 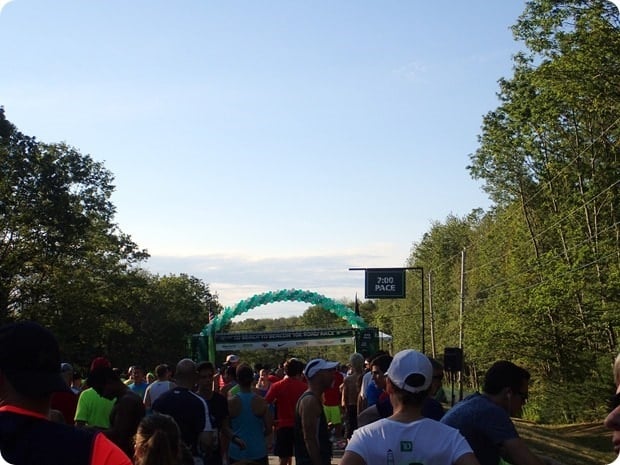 After a spring of near PRs, I was DETERMINED to get a PR for this race. My old 10k PR was actually on this course, too, so it was perfect to challenge it on the same terrain. My 2013 Beach to Beacon 10k finish time was 48:54 (a 7:53 minute/mile pace). Considering I ran two 10 milers this spring at basically that pace, I knew I could pick it up a little for a shorter distance, although I remembered that this course was far from flat.

While we waited to start, I sipped on a little Vega Sport Pre-Workout Energizer that I brought from home and chatted with a woman next to me. Let’s do this!! 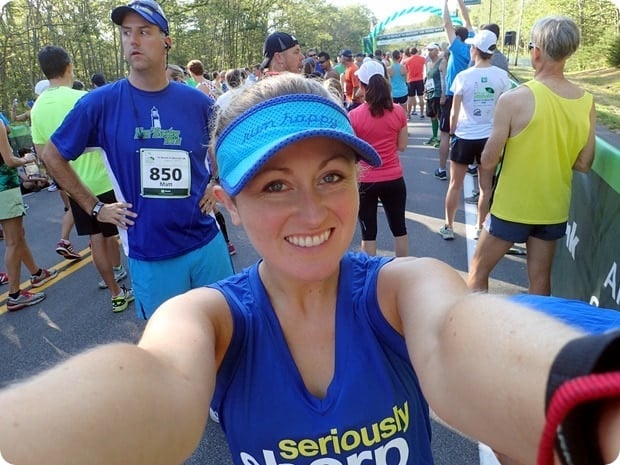 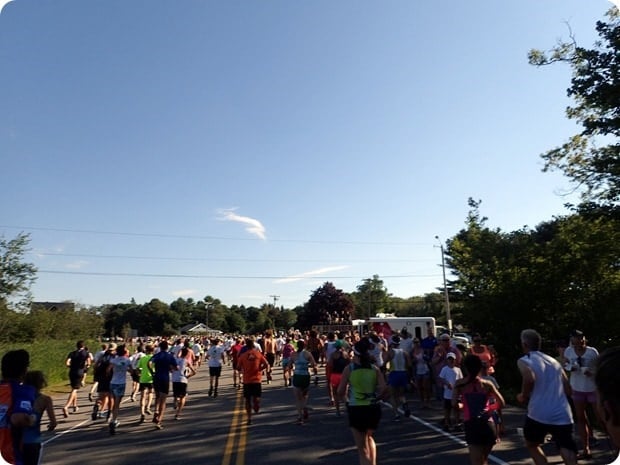 From the start, my legs felt pretty good, but man it was HOT. Like, way hotter than I thought it would be, and the sun was relentless. But no matter how hot I was, I was NOT going to give up on getting a PR this year. Since I knew the heat would get to me later, I tried to get a little bit of time in the bank by starting fast, but not so fast that it would crush me later. I was also keeping in mind that my Garmin splits are always a little off for races – it usually tells me that I’m going faster than I really am, because the course ends up being a bit long according to my watch. So I remembered to keep that in mind, too! 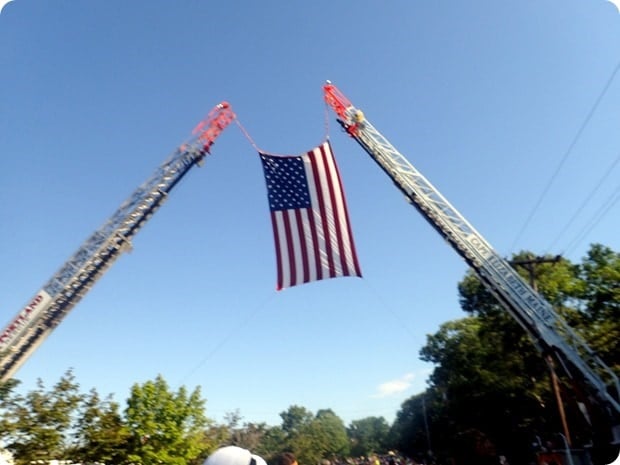 There were water stops every mile, which was great considering the heat. I grabbed some water at mile 2 and tried to choke a little down while still running. Normally I don’t bother with water during a 10k (and you know I wear my hydration vest for any races that are longer than 10k) but since it was so hot, I decided to be cautious. 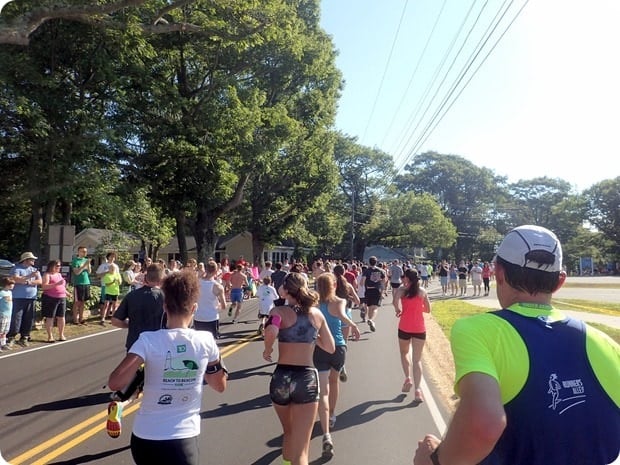 The heat started to get to me, and so did the hills – I had forgotten just how hilly this course was – but I focused on continuing to push it and not letting my pace slip too much. I also tried to fly down the downhills to make up for the slower uphills. I would NOT give up on this PR, even though my body really wanted to walk/stop/go swimming in a glacier. 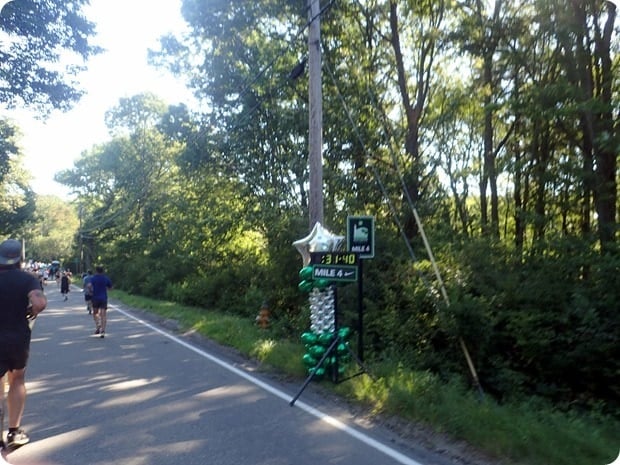 My favorite part of the course, which I remembered from 2013, was this spot around mile 4 and a half or 5 where it opens up and you have a beautiful view of the water. 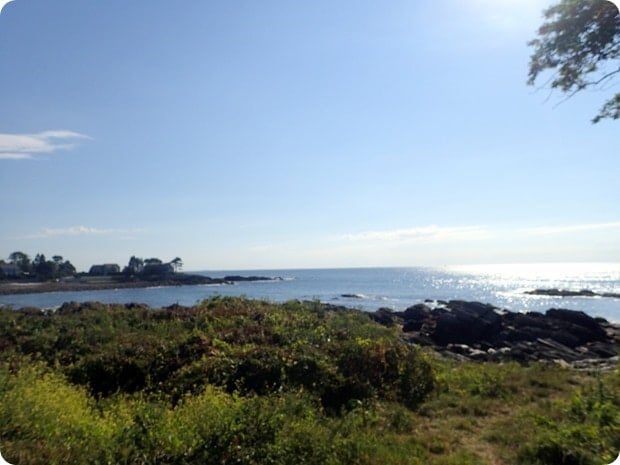 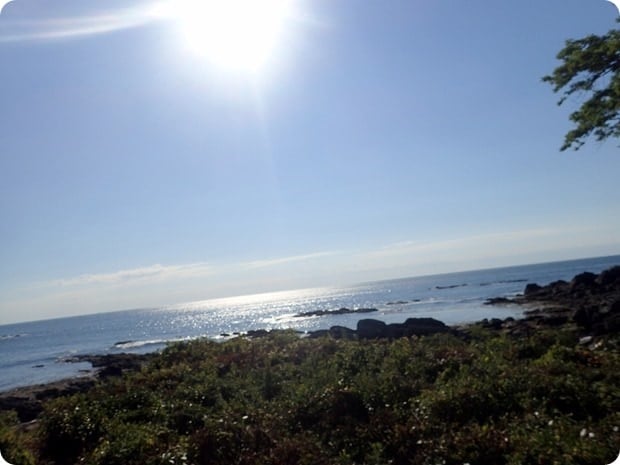 By mile 5, I was tired and hot and totally wanted to give up, you guys. I focused instead on my mental game and just hanging on, talking myself into it the whole way. I didn’t skip out on the beer tasting and a glass of wine last night to bail on this PR. I didn’t get up really early so many days this year for track workouts to not make them worth something. I would do this. Just a little over a mile left – that was nothing. Just keep pushing! I’m surprised now, looking at my mile 5 split, that it was quite speedy because that felt like the hardest mile. There was some nice downhill during that mile, so I guess it helped! I also grabbed another cup of water around mile 4 or 5, drank a little, then tossed the rest down my front and back to try to cool myself off.

Mile 6 was the hilliest, I remembered from two years ago, so I tried to prepare myself mentally. I felt like I was crawling up the hills but I knew from my watch that overall I was still holding a decent pace. All I had to do was hang on – and build as much time on the downhills as I could. I was still on track to PR but I knew it might be a little close, and I couldn’t afford to get lazy at the last minute! 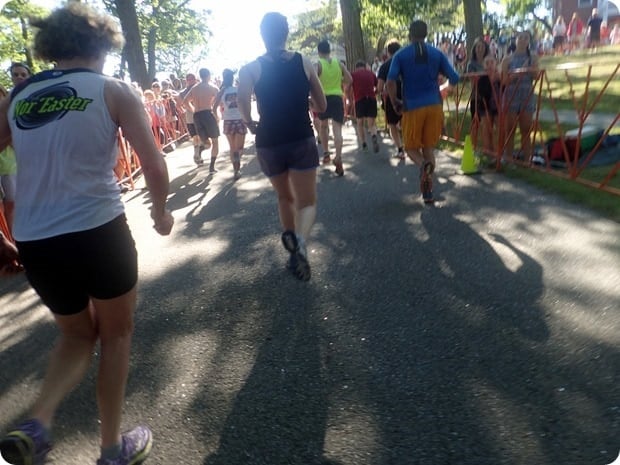 When you hit mile 6, there are tons of spectators – actually, this race has a fair amount of spectators the whole time, especially for a small race – which is awesome. I let their encouragement wash over me and aimed to really pick up the pace for the last quarter mile or so. I was SO CLOSE – I could do anything for a quarter mile, right? Just one more lap around the track! 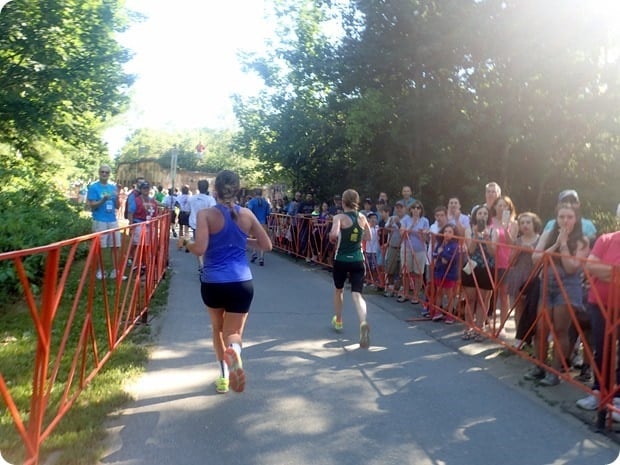 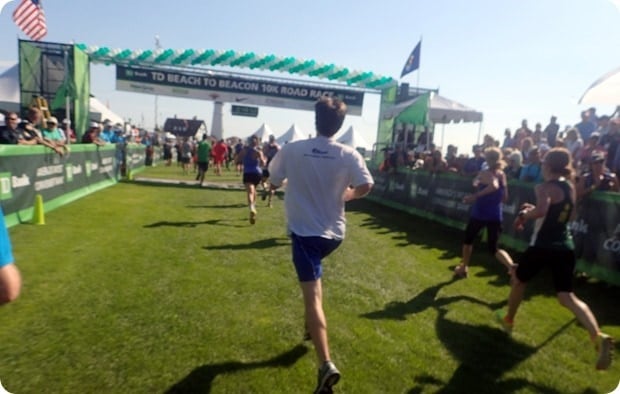 When I crossed the finish line and saw the time, I was SO pumped. Finally – after 2 years, I had set a new PR!! And man did I earn this one in the heat with those hills. 🙂 (Sidenote: now I really want to do a flat and cold race to see what I can do!) 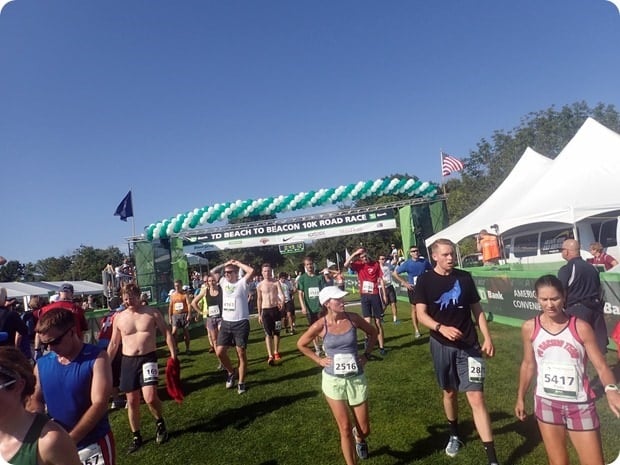 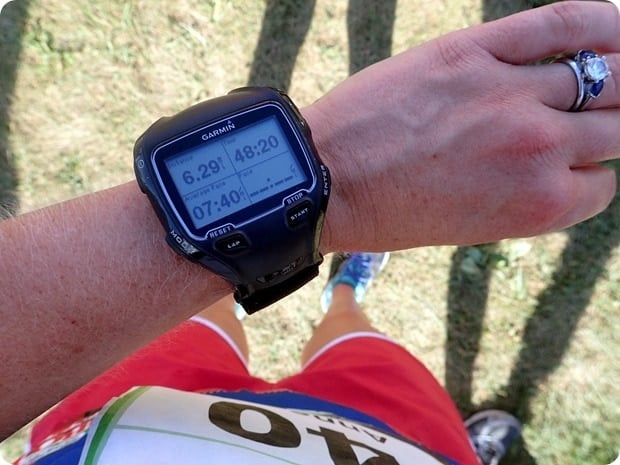 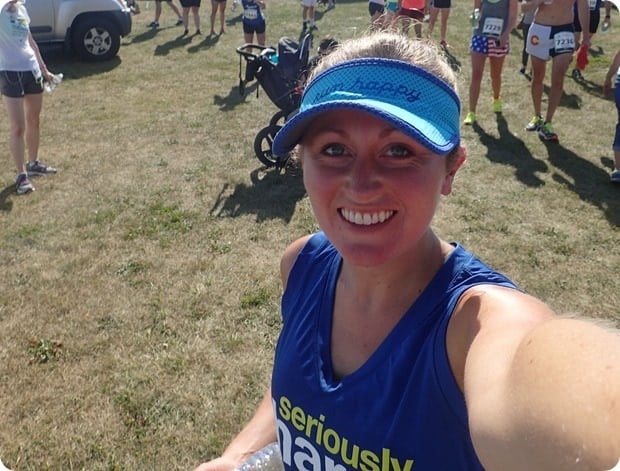 My only complaint about this race is that they make you walk about a half mile (uphill) until you get to the water, and I was SO hot and thirsty when I finished this race. Sweet, sweet water – you are amazing. They redeemed themselves by having watermelon in the runner’s food tent, though – greatest thing ever after a run! 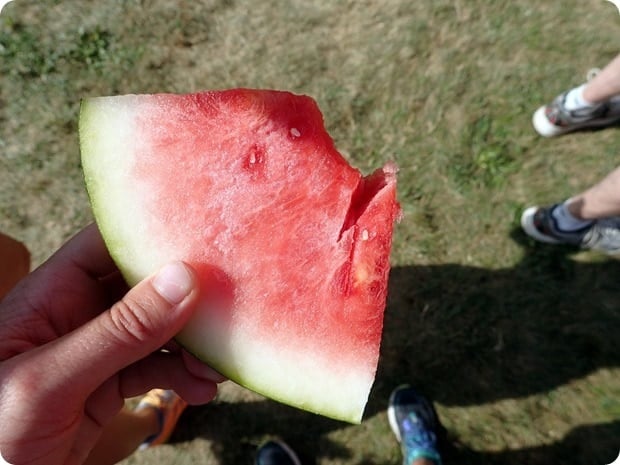 I also snagged a chocolate milk, a yogurt, and a little container of blueberries. Love that they had fresh blueberries!

Then, it was photo time! One of the most amazing things about this race is the finish area in Cape Elizabeth, which features stunning views of the Portland Head Light (the nation’s first commissioned lighthouse!). 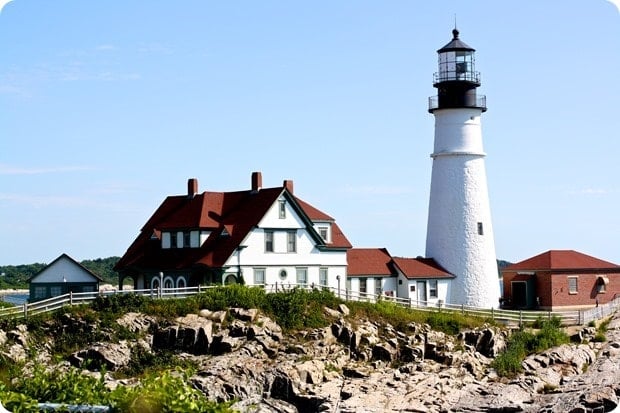 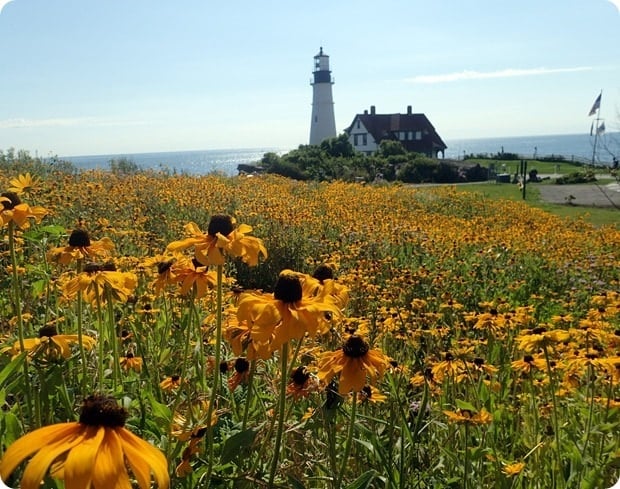 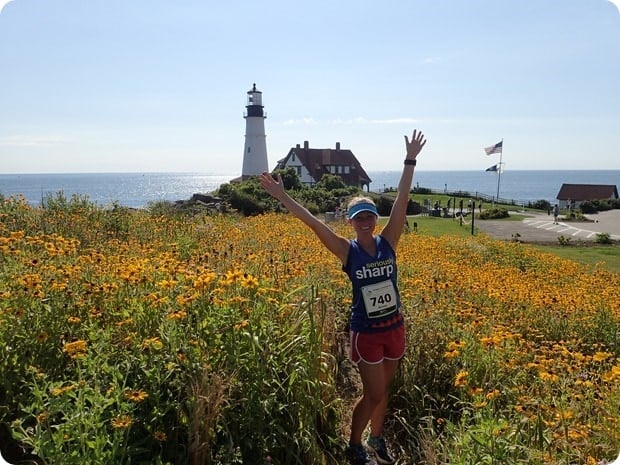 Deanna got herself a shiny new PR, too! 🙂 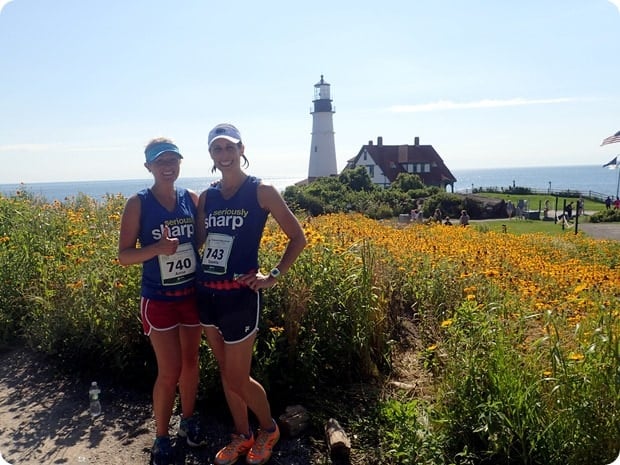 We met up with the rest of the crew shortly after. Everyone crushed it! So proud of team #CabotFit. 🙂 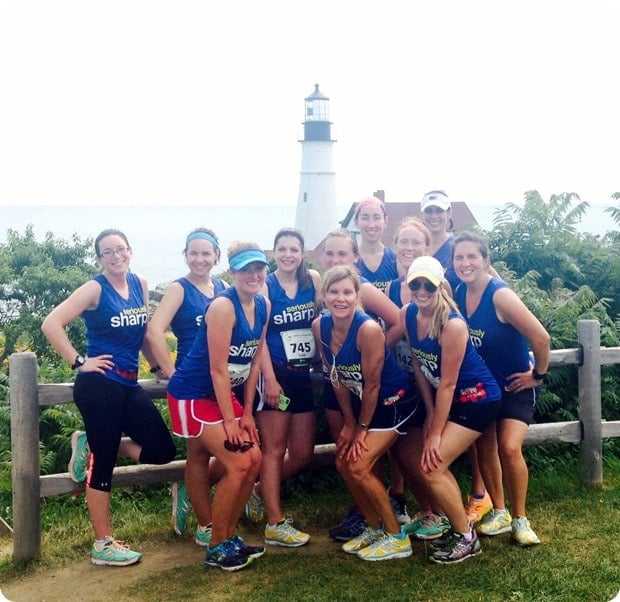 We were all so hot after the race that once we got back to the Higgins Beach Inn the choice was clear: do not stop, do not pass go, just dive directly into the ocean, still in running clothes. 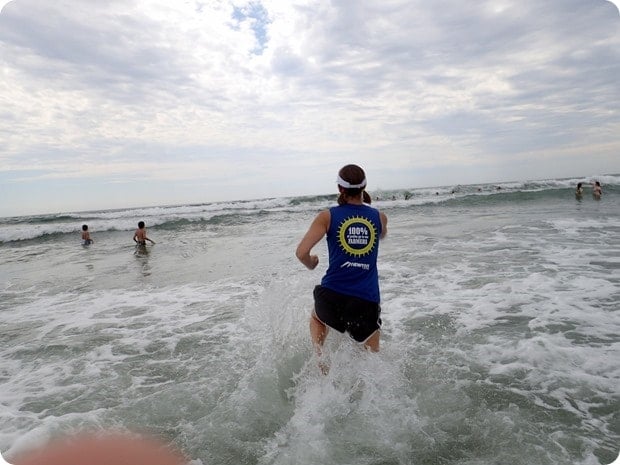 Yep, this was the best idea ever. That water was FREEZING COLD and it felt amazing. Hello, built in ice bath! 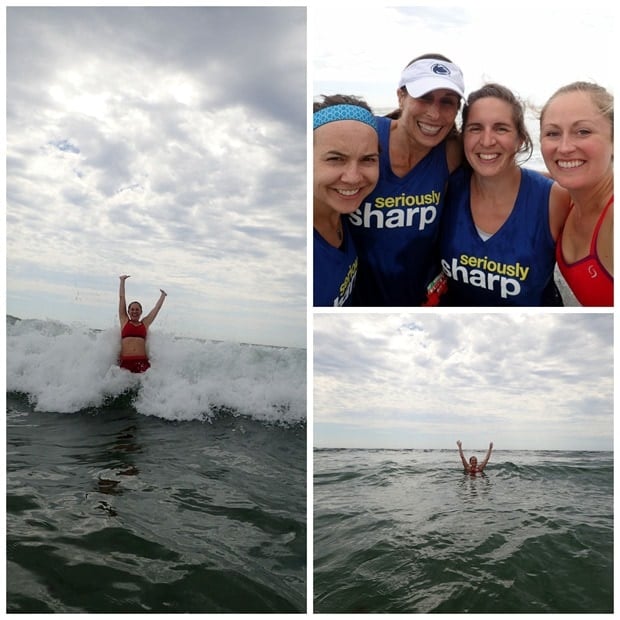 Another HUGE thank you to the Cabot team for hosting us this weekend and for the opportunity to run this race. Until next time, Maine! I’ll miss you!

And now, I’m off to update my race recaps and PRs page. 😉 Hizzah! 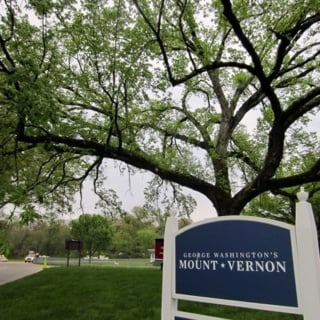 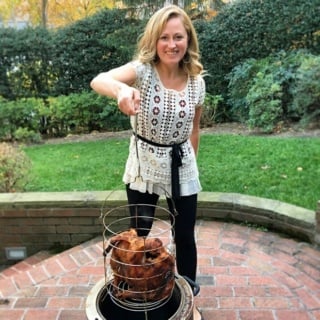 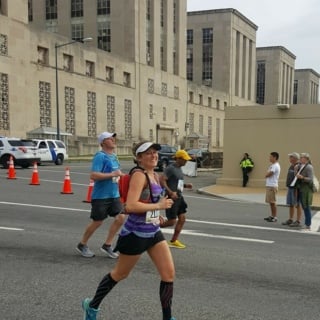 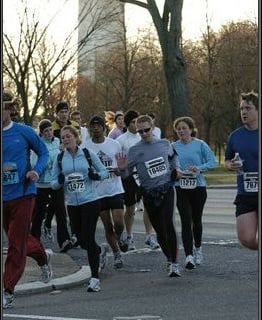