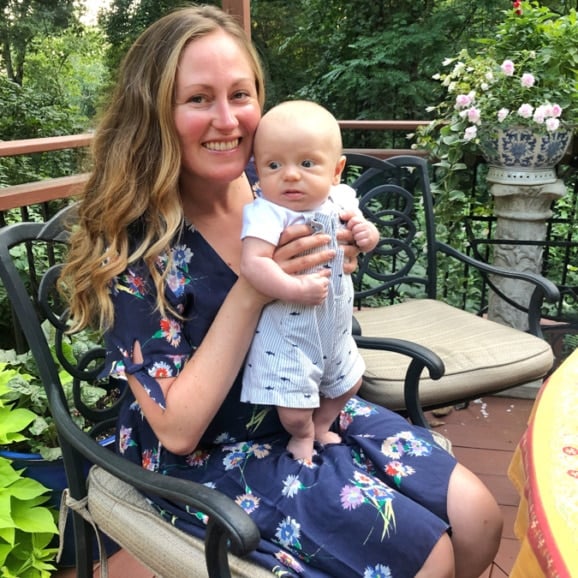 I’m Back! Here’s What We’ve Been Up To

I hope you enjoyed the recipes that were posted the past few months while I was on maternity leave. I can’t believe summer is just about over!

I’m going to start easing back in to posting and my goal is to post twice a week moving forward. I’m planning to publish new posts on Tuesdays and Fridays, just so you know what to expect!

The plan is one lifestyle post and one recipe or recipe round up post each week, but some weeks it may be two recipe/food posts (like next week, when I’ll be on vacation in Lake Anna (<- last year’s trip recap… I had just found out I was pregnant!) with family and wanted to plan posts ahead of time).

And now, here’s a bit about we’ve been up to since baby Wes was born on June 1!

Time has been flying – he looks so tiny in this photo below that was from a couple weeks in: 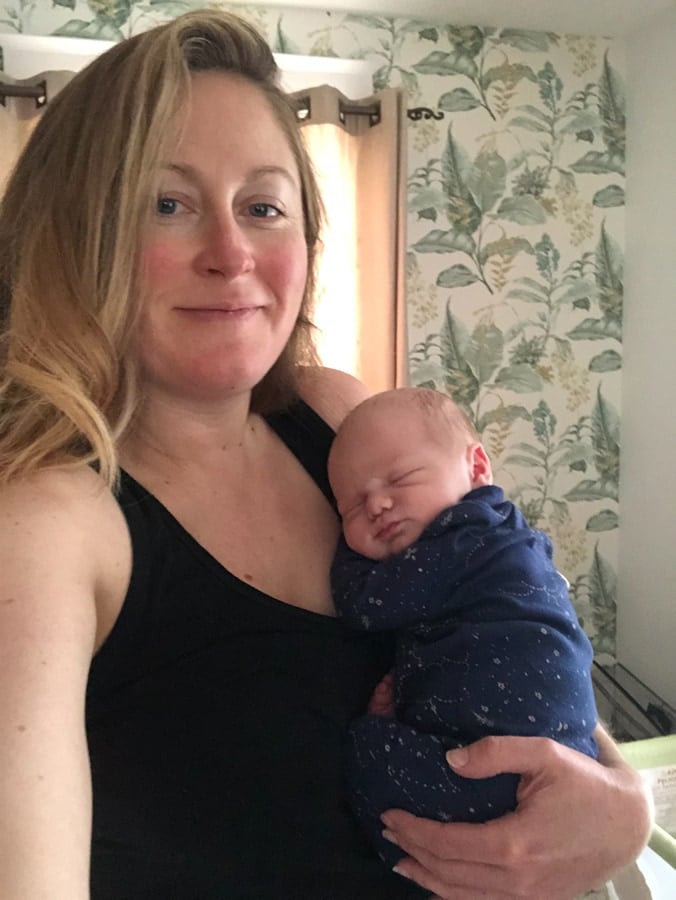 What We’ve Been Up To

So, of course what I’ve mostly been up to since baby Wes arrived is hanging out with him. 🙂 See also this post: 9 weeks of you. <3

I’ve been able to soak up and enjoy the newborn days a lot more this time vs. last time because a) I’m more calm/feel way more competent than I did the first time with Riese, and b) because I really do know how quickly the time goes now. Plus we are not planning on having any more children so this is my last baby to cuddle!!

It also helped a lot that I took a real maternity leave this time unlike last time… feeing very grateful I was able to do that! 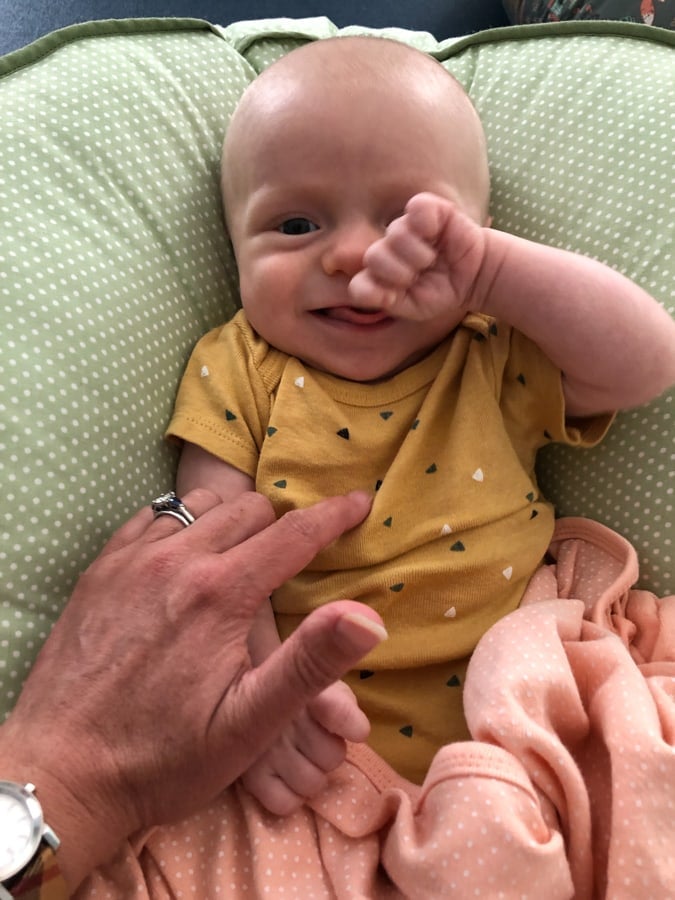 We have a part time nanny share lined up but it won’t start until November – it will be so nice to have a couple more months of undivided time with this little guy, even if it does mean squeezing work in mostly in the late evenings!

Anyway! Besides cuddling baby Wes, we have also had some adventures in the past few months that I thought it would be fun to highlight here on the blog to bring you all up to speed.

Here’s what we’ve been up to this summer!

This trip took place when Wes was almost 5 weeks old, and we were on the fence about whether we felt it was doable or not… the car ride in particular felt very daunting.

We ended up waiting until right before the trip started to decide (his family had a house either way and the others were all going, so luckily we could decide last minute) and in the end decided to go for it! 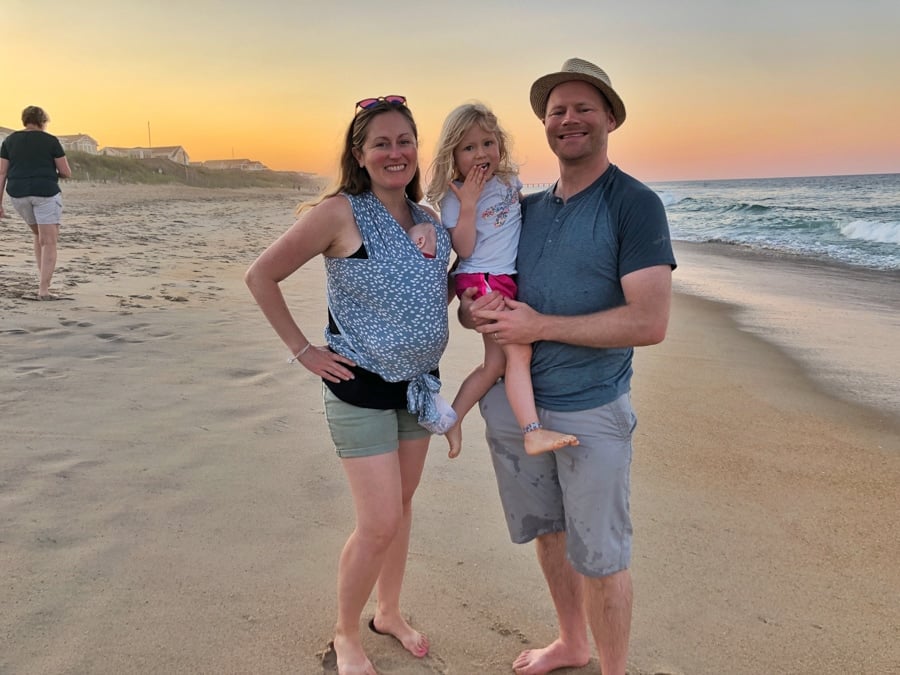 The drive was not fun (Wes hated his car seat and we couldn’t squeeze back there in the middle between him and Riese so we just had to listen to him cry, it was torture), but we made it and it ended up being worth it for sure, despite the fact that the drive home took 9 hours thanks to making like 10 (thousand) stops.

It was almost comical – every time Wes fell asleep Riese would have to go to the bathroom or we’d be hungry, etc., and the one time Riese fell asleep Wes almost immediately started wailing so we had to stop and… yeah.

At the beach, we did a lot of baby wearing – one of us would wear Wes while the other chased Riese around. 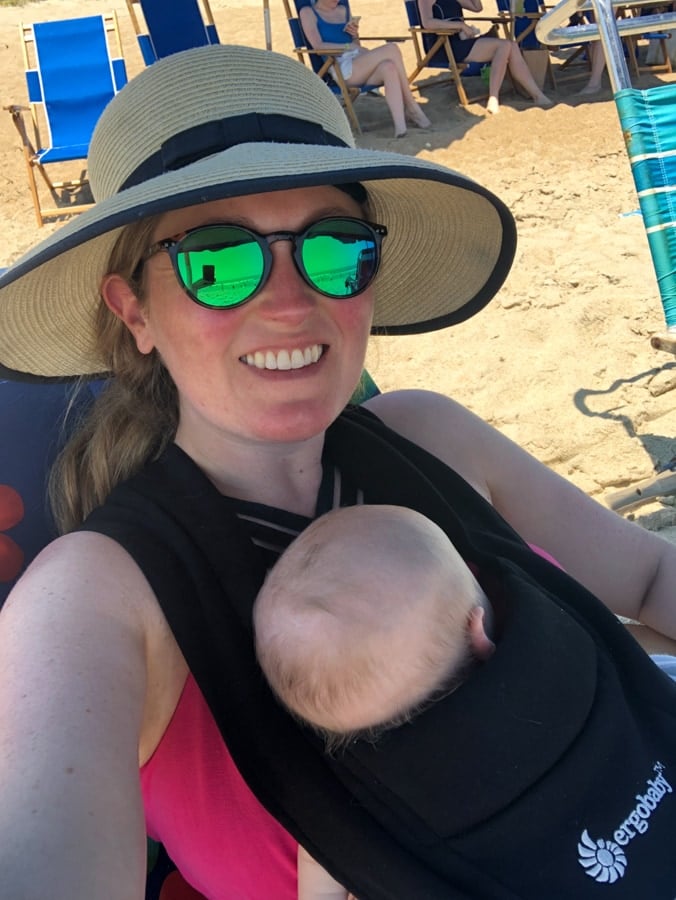 We also enjoyed lots of pool time at the house: 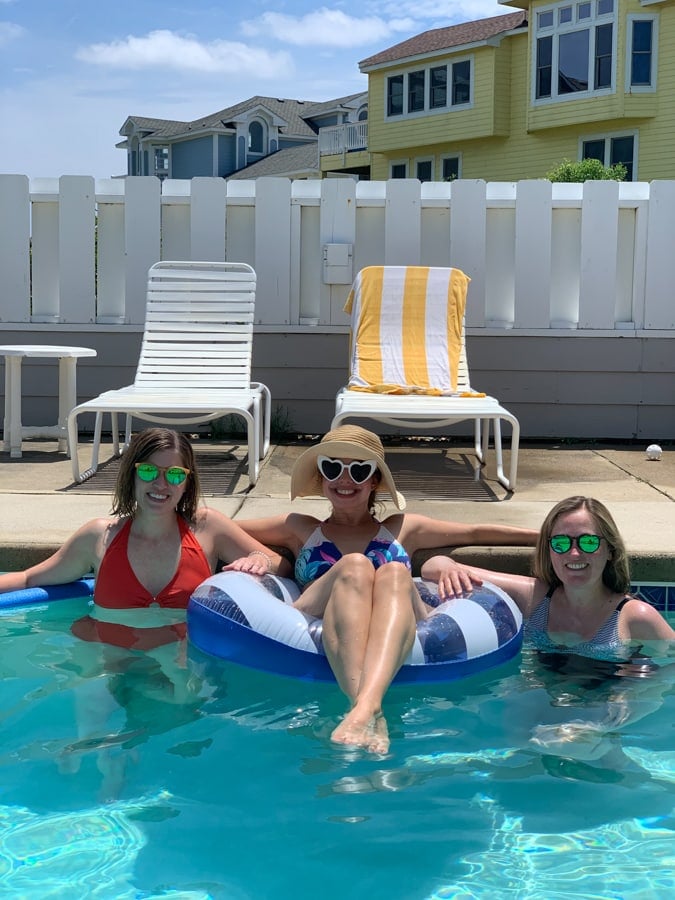 And Matt and I left Riese with the grandparents one night and went out to dinner with Wes + our friends Tom and Janice who were also at the beach at the same time (they go with us every year). 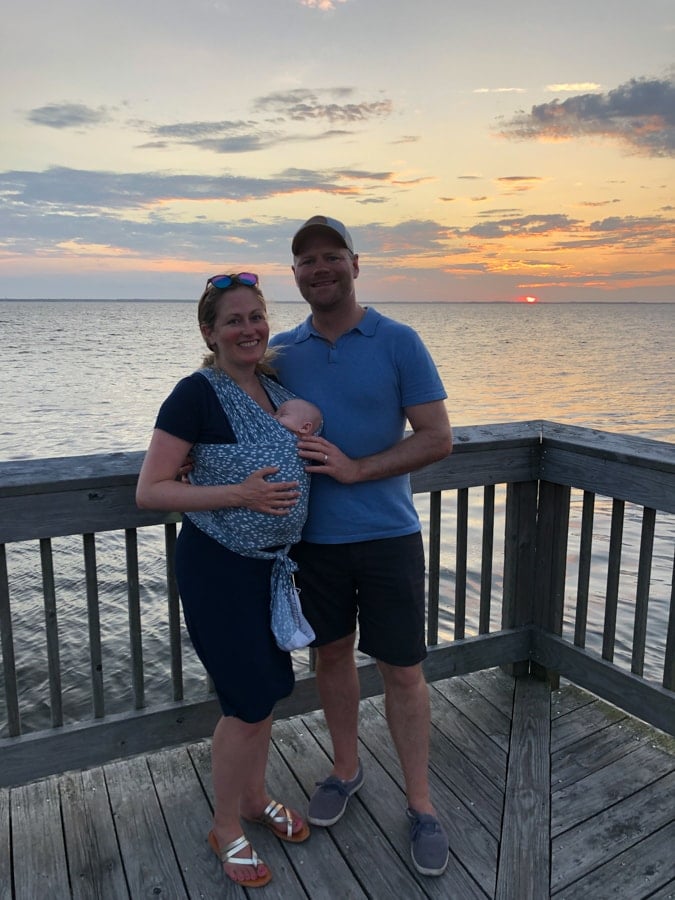 We went to NC Coast right on the boardwalk and had a fabulous meal with gorgeous views. We went there when we were in Duck, NC for our Outer Banks Babymoon weekend in the spring and it was super good so we knew we wanted to go back!

I had scallops on a really good strawberry balsamic salad that hit the spot. 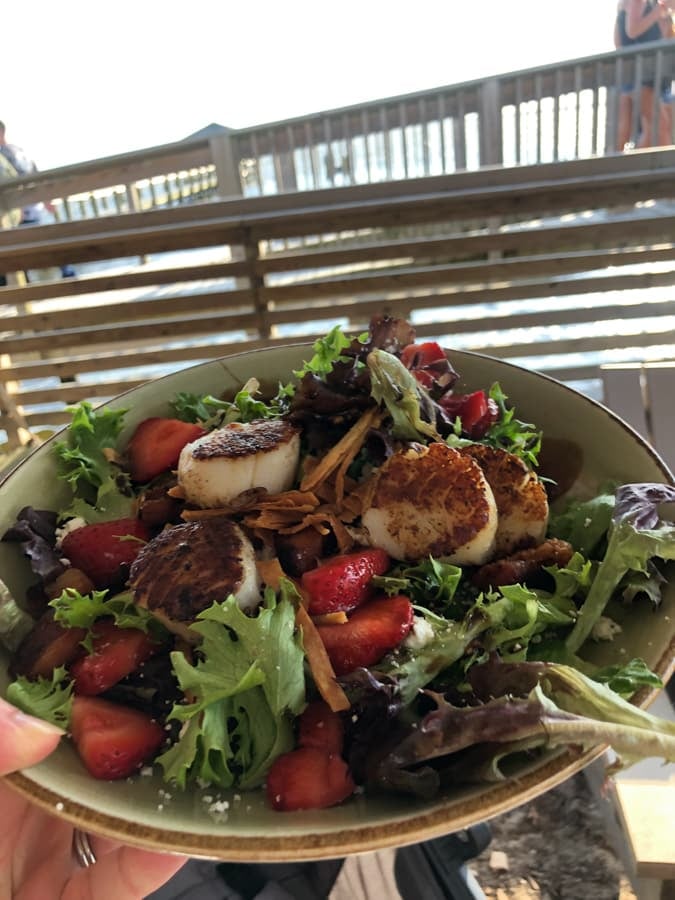 Plus some raw oysters and tuna – yay for being able to enjoy these again post-pregnancy! I also enjoyed some hard kombucha which was fun, hadn’t had hard kombucha before!

I got cleared by my doctor right before we left for the beach, so I also attended my first postpartum fitness class while we were there – a free outdoor yoga class that the town of Duck offers every Tuesday morning all summer.

It was nice and gentle and felt lovely to stretch! 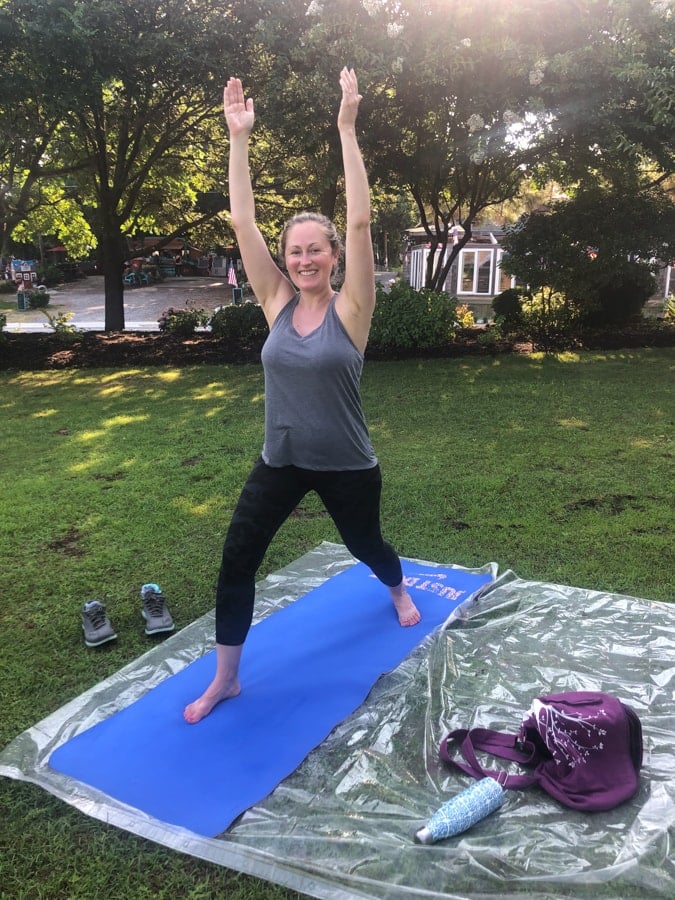 And yes, that’s a shower curtain under my mat – that was my trick when I went to outdoor yoga a lot last fall… it was the best way to keep my mat clean that didn’t involve a super heavy, wet towel to lug home after!

Speaking of fitness, when Wes was around 7 weeks old we started going to outdoor baby and mommy postpartum-specific fitness classes together!

The classes have been a really nice way to get out and chat with other moms and to give a couple mornings a week some structure (Riese was in camp at her preschool, in case you’re wondering)! Plus it has felt good to ease back into fitness in a way that feels very safe and appropriate for where I am physically.

Sometimes Wes chills in the stroller bassinet and looks up at the trees, other times he’s on my mat, and other times he wants to be held. We make it work!

My friend Chelsea and her sweet little man Luca came with us while she was still on maternity leave. 🙂 Miss you, Chelsea! 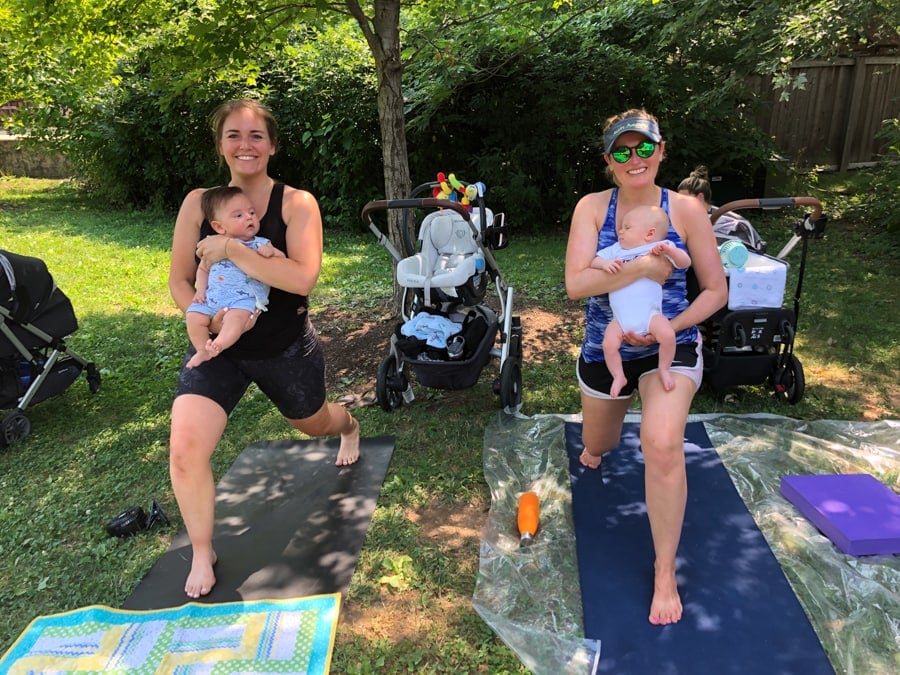 3) We spent a couple weeks in Pittsburgh with Matt’s parents.

There was a break at the end of August between camp and preschool starting back up so we decided to take advantage of it (plus the fact that Matt is still working remotely) and spend some extended time with Matt’s parents, plus all our friends who live in the area!

I love their backyard this time of year – so lush and green. (Plus delicious tacos.) 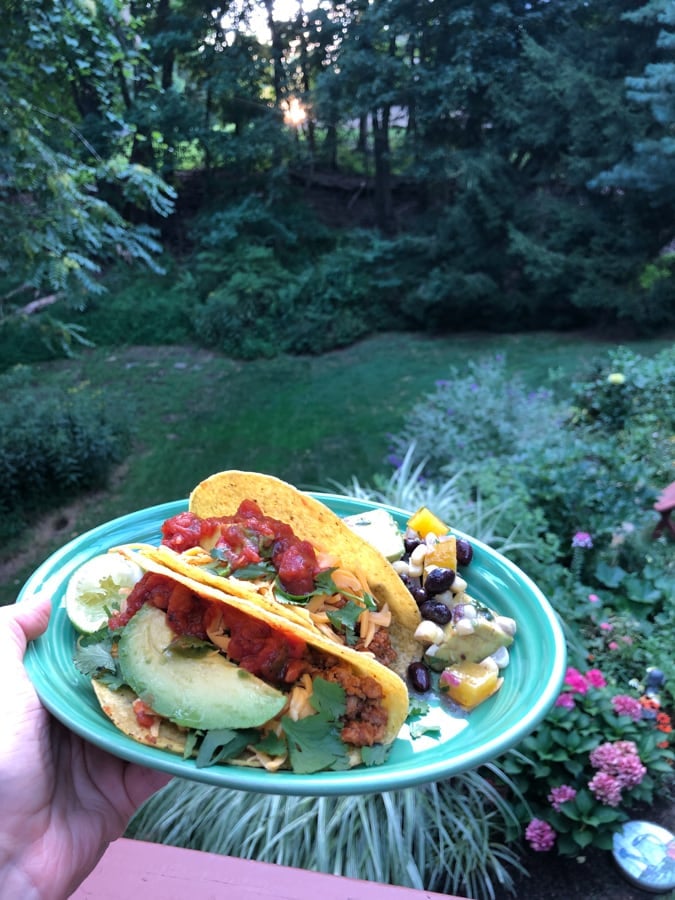 We had fun hitting the pool with Riese, seeing friends, and Riese got some quality time in with her grandparents, too! Win/win/win.

We also had lots of good food! One of the big highlights was a backyard party with some of our local friends – Matt’s dad smoked pork to make homemade pulled pork and it was super delicious.

We had quite the feast!

Riese had a blast in the bounce house that a friend lent us for the party, and we had fun showing baby Wes off. 🙂 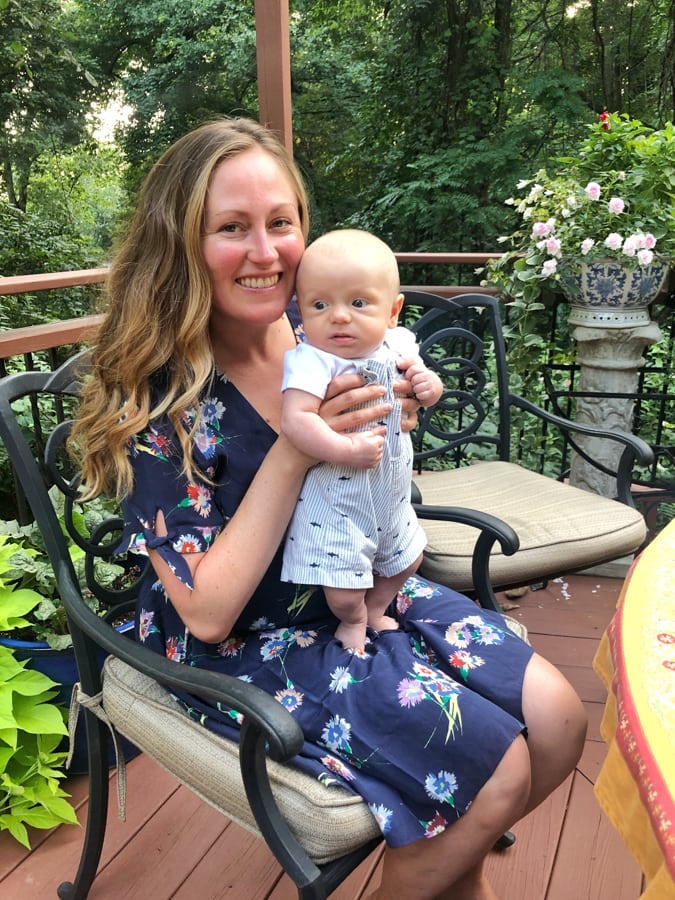 It was nice to get a break from the oppressive DC heat, too.

It was rainy the first part of our trip but the second half was nice – still very warm but not outrageously hot which was a nice change! 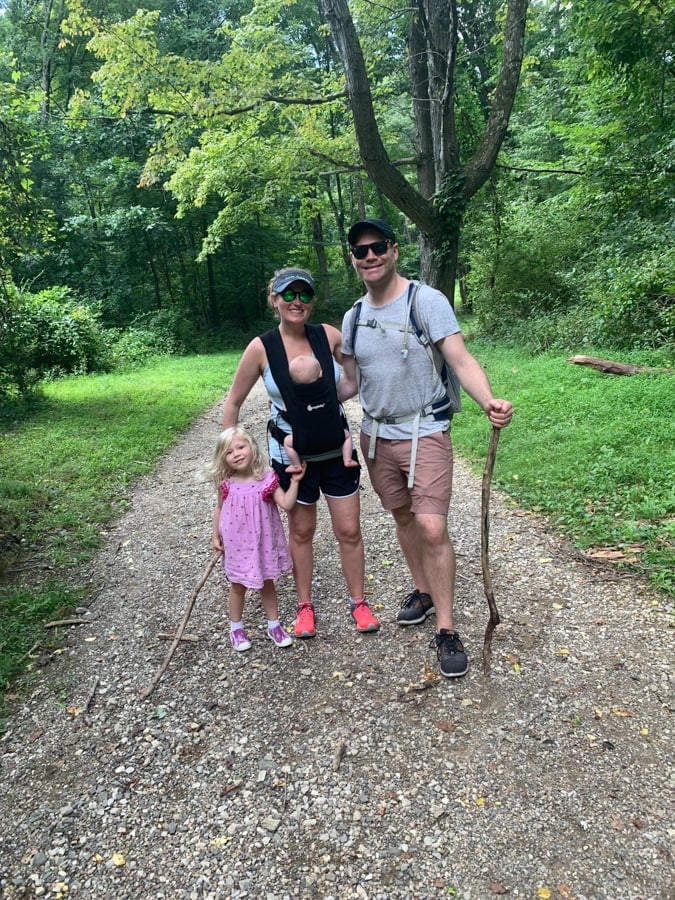 I also made it out to two private pilates reformer classes with a couple friends!

It was tough but felt really good and seemed like a good workout for rehabbing pelvic floor in particular. I’m going to see if I can find some reformer pilates classes near me at home! 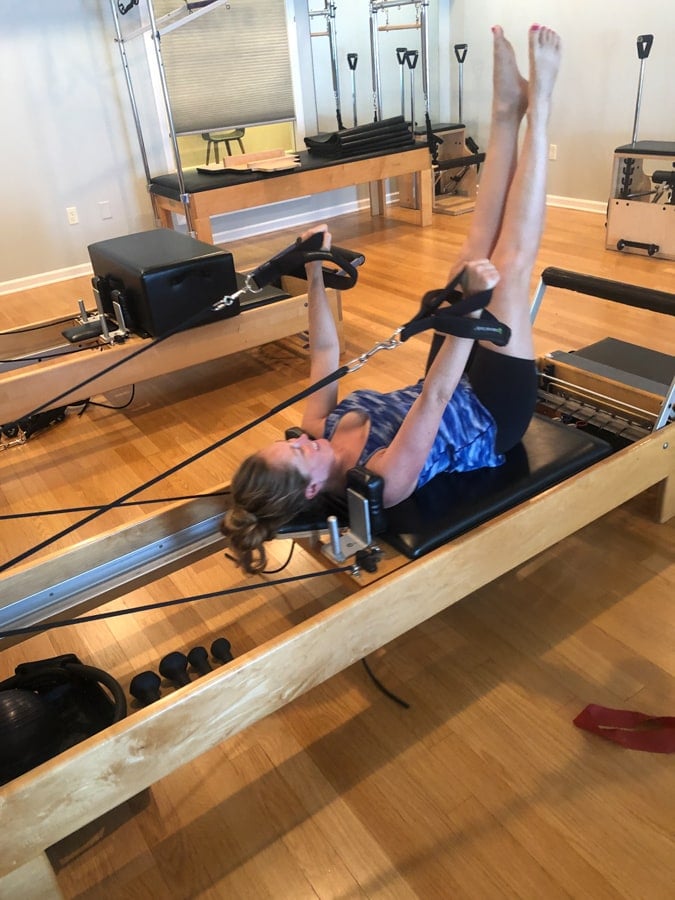 In case you’re wondering, I haven’t started running again yet (my pelvic floor PT recommended waiting a minimum of 4 months postpartum, but ideally 6 months postpartum, before starting to run again), so for now I’m enjoying the postpartum fitness classes with Wes and doing some yoga and lots of walks, too.

4) Speaking of Pittsburgh… our basement at home flooded the night after we left on the trip.

We have a sump pump that’s constantly running because there’s basically an underground river under our house, and we had the perfect storm combination where there was torrential rain and the power went out for over 12 hours.

Our sump pump’s backup battery only lasts for a few hours, so… this is what our cat sitter found the next morning when she went over to feed Zara. 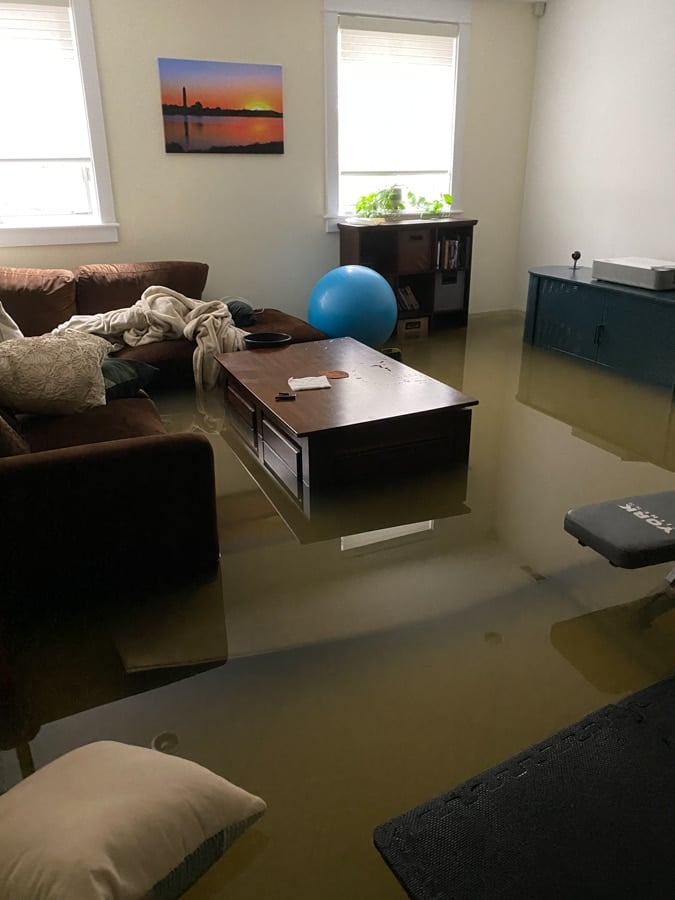 There was over a foot of water down there, ugh.

We had to toss our couch, coffee table, rug, and bookcase. We are going to look into getting a generator so that this doesn’t happen again! Womp, womp. 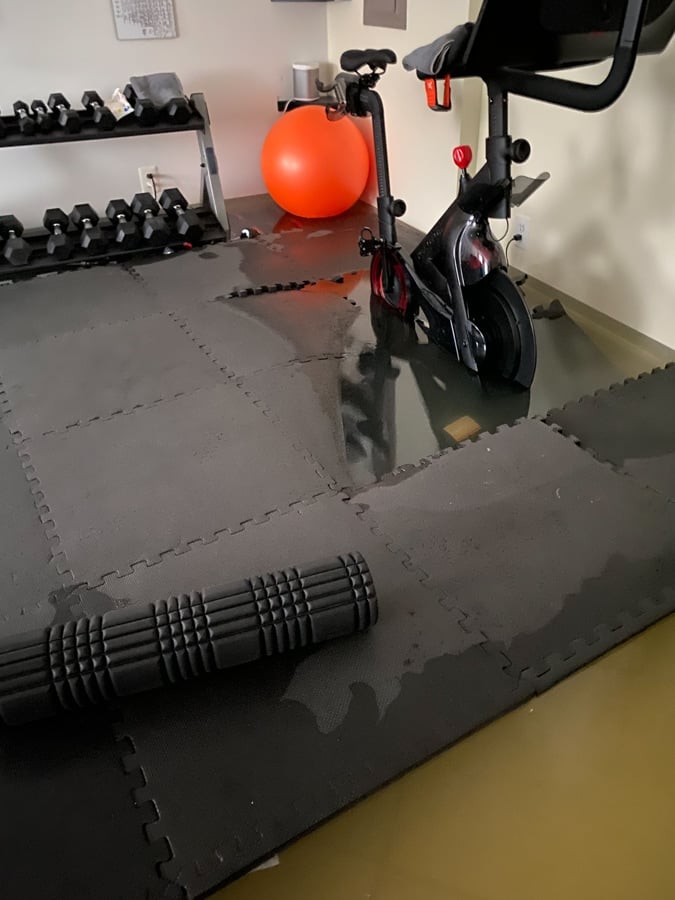 I do have some good news though – if you’re looking at that above photo like “Noooo, not the Peloton!!!” (because that’s what I was thinking when my mom sent me that picture), I’m VERY happy to report that it still works!!

It wouldn’t turn on when we got home and we were worried, but Peloton sent us a new power cord plug thingy and that did the trick. WHEW!!

I’m just starting to get back into riding the Peloton again after a long break at the end of pregnancy and postpartum, and it feels good to get in some tough but low impact cardio.

And that just about catches you up on some of the bigger trips/of note happenings from this summer!

If you have any questions for me (baby/postpartum or otherwise) or topics you’d like me to write about now that I’m back in action, just let me know.

Until next time, friends – thanks for being here! 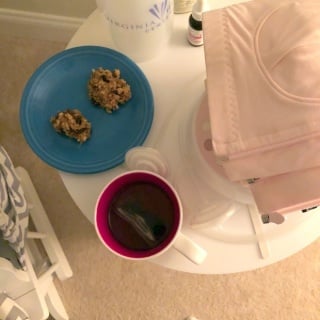 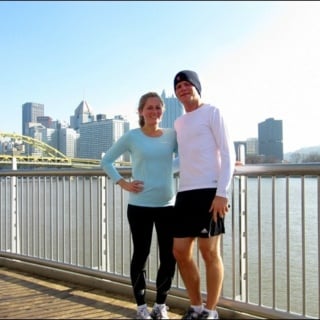 Pittsburgh by Foot – Our Own Personal Turkey Trot! 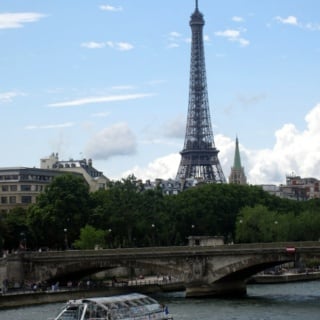