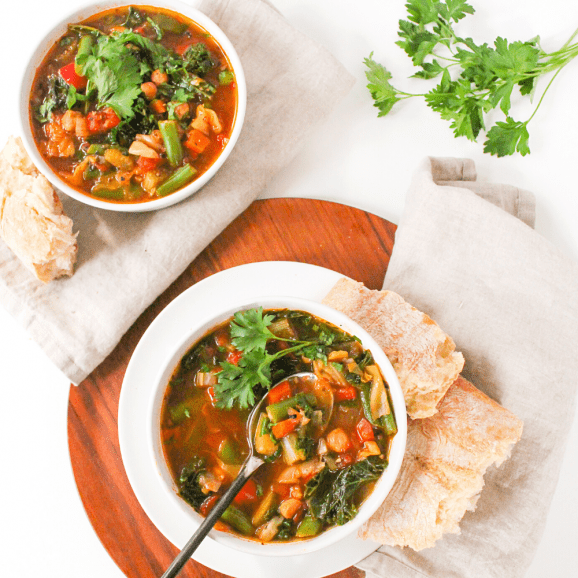 This Instant Pot vegetable soup is super easy, savory, and flexible. It’s cozy and healthy at the same time – a fabulous combination. And because it’s made in an Instant Pot, it’s a quick meal you can make any day of the week!

This is one of those ‘clean-out-the-fridge’ meals. You know, the ones where you can use basically whatever you have left in your veggie drawer (or pantry) and it will turn out delicious no matter what! Any veggie combo would be tasty here. 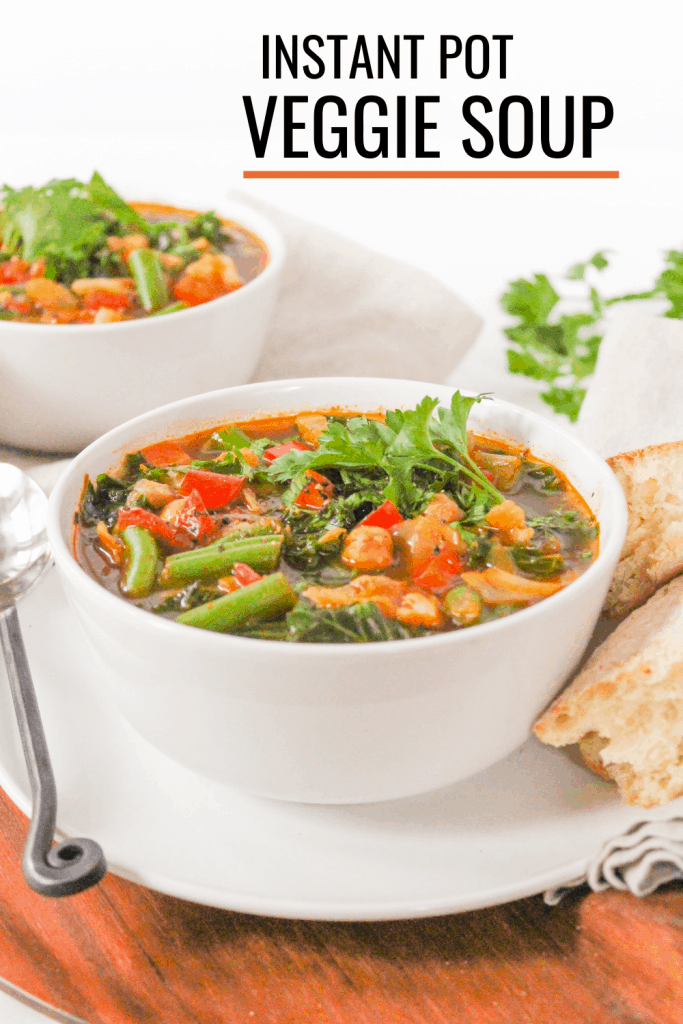 This comforting soup is all you need to warm up on chilly nights. And because it’s so versatile, you can make it over and over and it might taste unique each time (depending on what you use). It’s similar to my Easy Minestrone Soup recipe, but minus the pasta – although this recipe also tastes good with pasta added if you want to give it a little more oomph! Just cook it separately and add right before eating.

And, because it’s made in an Instant Pot (<- affiliate link to the one I have, 6 quart size), it’s quicker than a typical soup.

Aside from chopping the veggies and a few minutes of sautéing, this recipe is mostly hands-off. You can even use frozen veggies in this – I’ve included instructions for that in the recipe below. 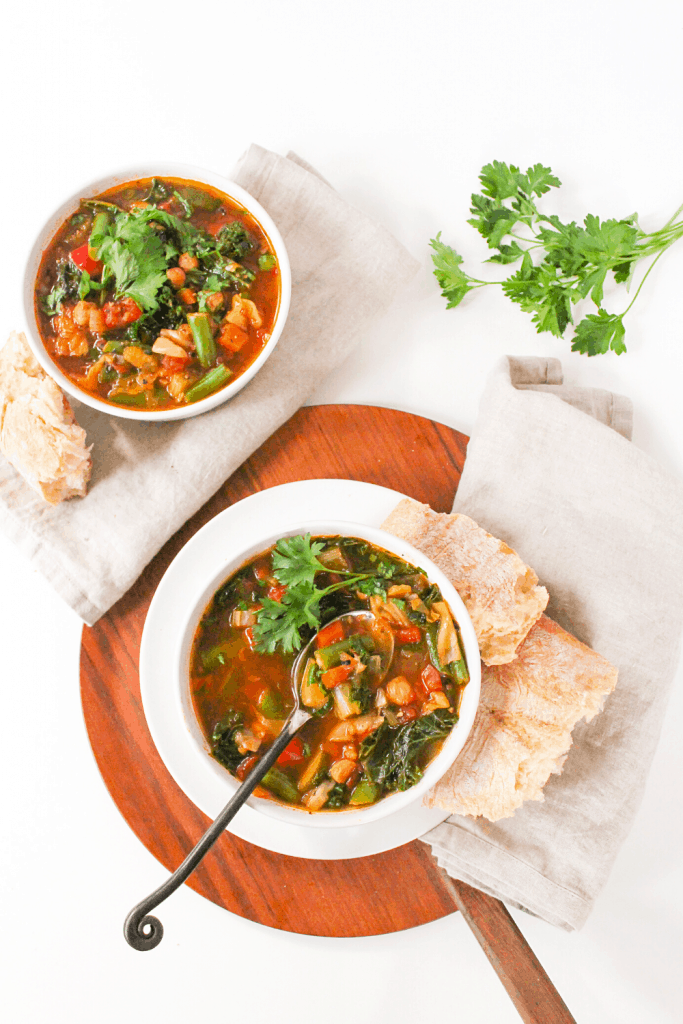 Like I said before, this recipe is flexible. The ingredients I included can be changed depending on what you have!

In the version I made, I used: 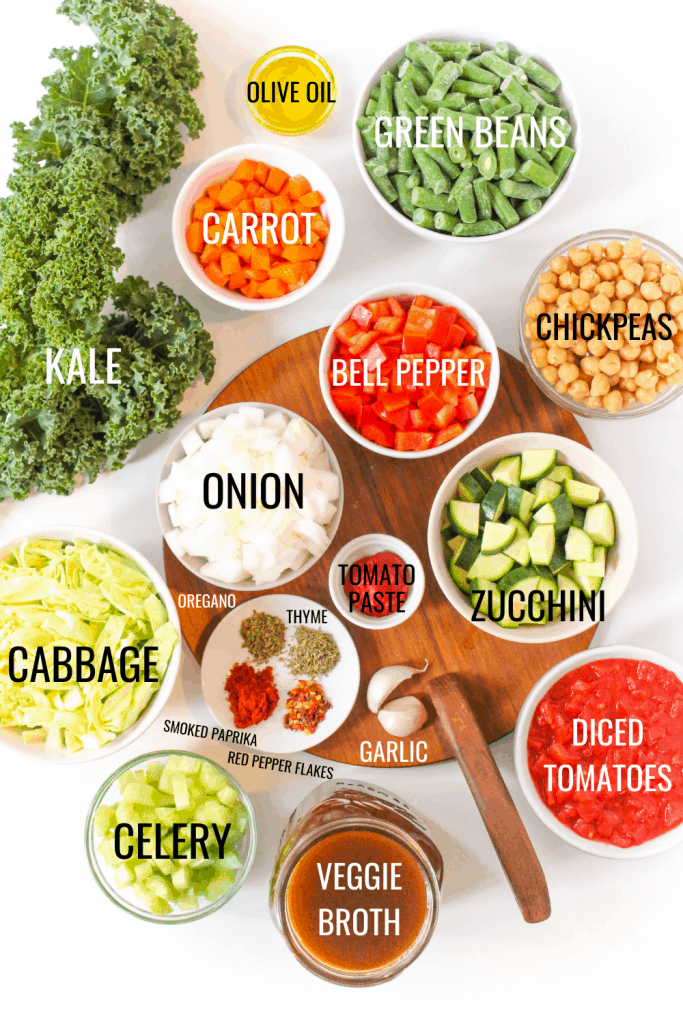 The onion, celery, and carrot are a great base, but you could also saute veggies like mushrooms, leeks, and/or fennel instead.

I chose zucchini, bell pepper, and cabbage for color and texture. But a different type of squash, red cabbage, any color bell pepper, or cauliflower/broccoli florets could also be used.

Additionally, any type of bean can be subbed for the chickpeas, or you could add extra beans. Black beans, cannellini beans, and kidney beans would all be great!

How to Make Vegetable Soup in an Instant Pot

Start by setting the Instant Pot to the saute function. Drizzle in a little olive oil, then add the onion, carrot, celery, and garlic. Leaving off the lid, stir and cook until translucent (about 5 minutes).

Next, add in the tomato paste, spices, and a bit of salt. Cook, stirring, for another minute. Then, add the zucchini (this can also be added just before serving if you prefer it super crisp vs. soft), bell pepper, cabbage, tomatoes, chickpeas, and vegetable broth.

Cover your Instant Pot, seal the valve, and set to the “soup” setting to pressure cook on high pressure for 6 minutes. This doesn’t mean your soup will be ready in 6 minutes, just FYI – it takes the IP about 10 minutes usually to get up to pressure before starting the 6 minutes. It will just say “on” while it’s heating up, then when you see the 6 minutes appear that means it’s high pressure and actually cooking. So be sure to plan for that extra time!

Once it’s done, carefully release the steam by turning the pressure release valve (I usually do this with a spoon or something so I’m not too close to the crazy steam).

Once all the steam is released, remove the lid and stir in your frozen green beans and leafy greens (I used kale) while the soup is still super hot. Let rest for a few minutes, until the kale is wilted and green beans are heated through. Lastly, season as you like with salt and pepper to taste. 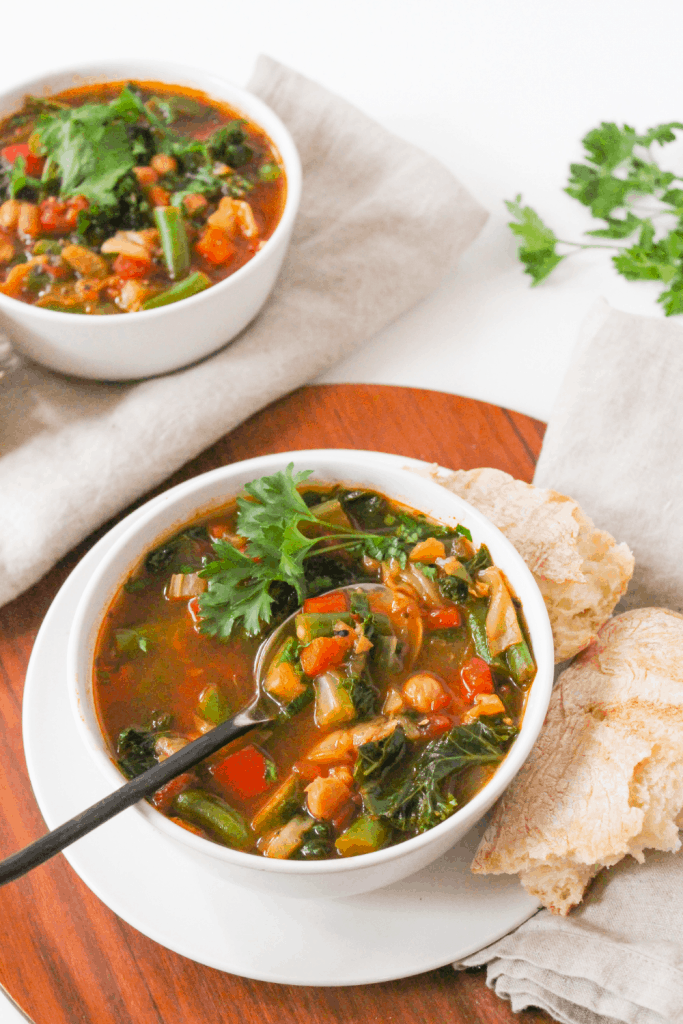 Serve on its own, or with a hunk of crusty bread and/or a sprinkle of parmesan cheese. You do you! It’s also great with grilled cheese.

Can I Use Frozen Vegetables in this Soup?

Absolutely! If using frozen veggies, I do recommend starting with the same onion, celery, and carrot base if possible. But other than that, you can go wild!

Feel free to substitute other veggies for the zucchini, bell pepper, and/or cabbage (just add them in the same step). Any other heartier veggies should be added before pressure cooking too, such as cauliflower, broccoli, or butternut squash.

As for smaller frozen veggies, I recommend stirring them in at the end so they don’t get overcooked. I used frozen green beans and added them at the end, and they heated through with no problem! Peas, corn, edamame or similarly-sized veggies would be perfect here.

How to Store Vegetable Soup

Once the soup has cooled, store in the refrigerator in an airtight container for up to a week.

You can definitely freeze this, too! It should keep for up to a year (or longer) in the freezer. I would recommend freezing the soup flat in Ziploc bags for more space-efficient freezing and time-efficient thawing. Nobody wants to deal with thawing out a giant block of frozen soup!

I also love Stasher bags (<–affiliate link), which seal well for liquids and are heat-safe. You could freeze the soup in a Stasher bag, then drop the bag in a pot of hot water to thaw and/or heat. 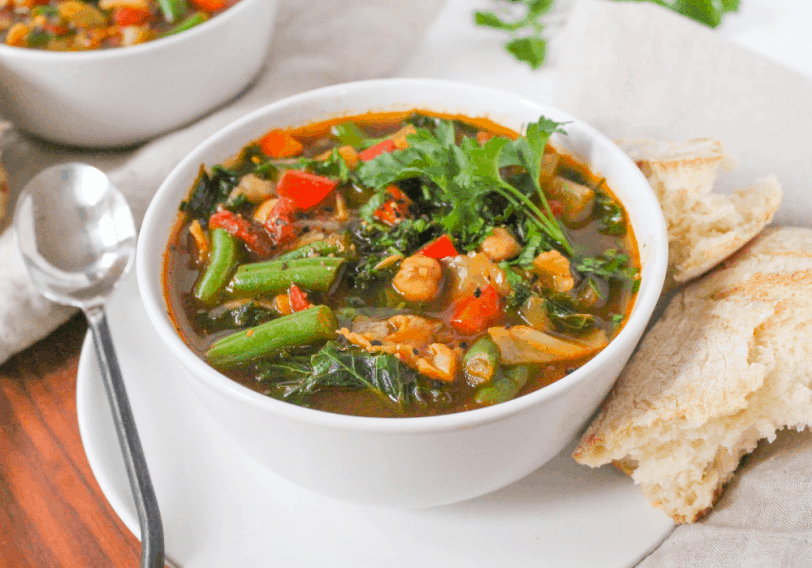 If you want to mix up your leftovers, try stirring in some rice or pasta (just cook separately and stir in before serving – you may want to add some extra broth if you do this, too) to this soup! If you are not trying to keep the recipe vegetarian, it’s also delicious with some rotisserie chicken stirred in before serving.

I hope you get a chance to try this soup! So much cozy deliciousness in one bowl. 🙂

Looking for more tasty soup recipes? Check these out: 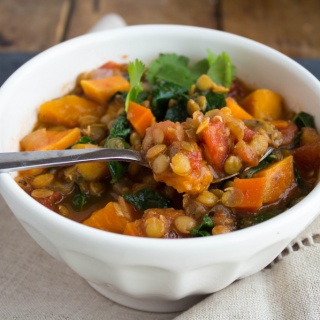 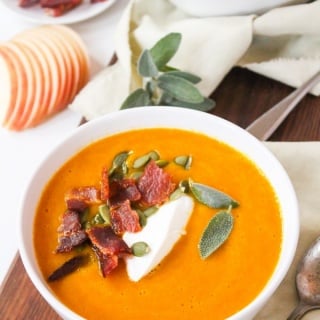 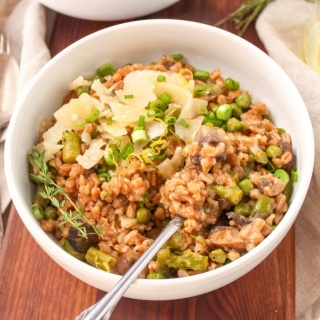 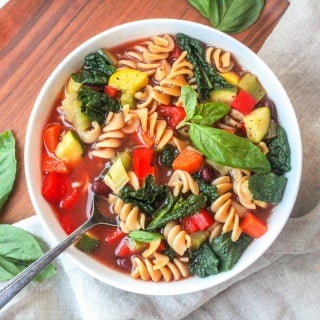