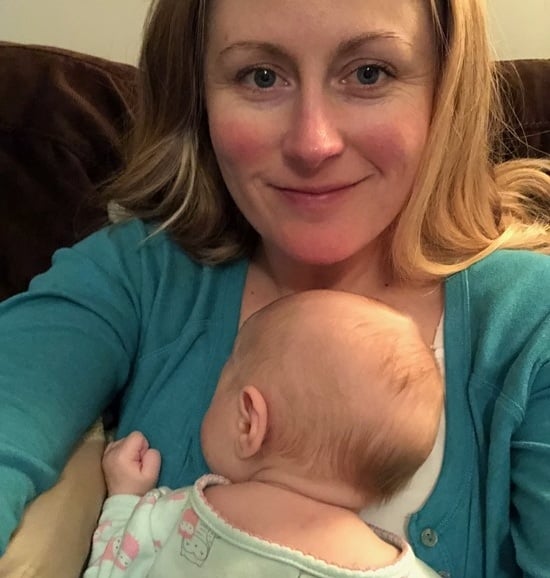 Hey guys. I’ve got some mom real talk for you this morning… things are feeling a bit tough over here today. But first, let’s chat about the weekend. 🙂 We had a nice weekend… lots of cozy time and baby snuggles. On Friday, we stayed in, had leftovers, and did this:

Saturday was an absolutely gorgeous weather day so we spent a lot of it outside. It was sunny but a little chilly so we put Riese in her snowsuit (I die over how cute this is) and took a nice long family walk. 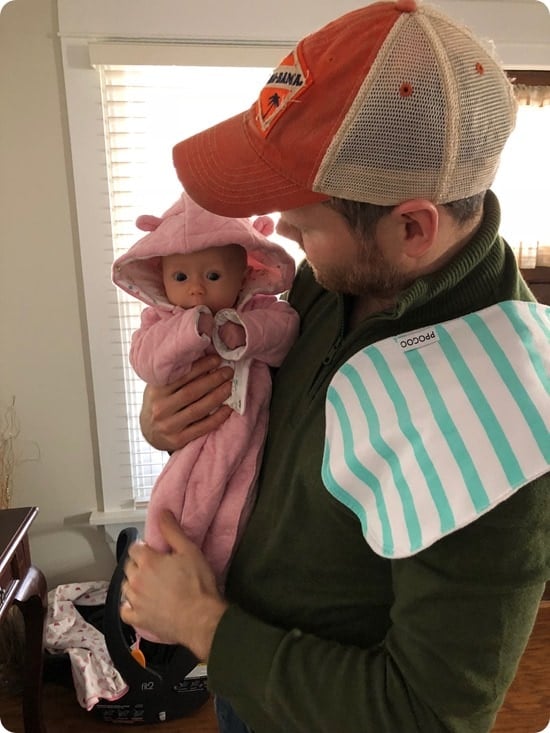 Riese is still really liking the Boba 4G Carrier, and so am I! It’s nice having her so close. <3 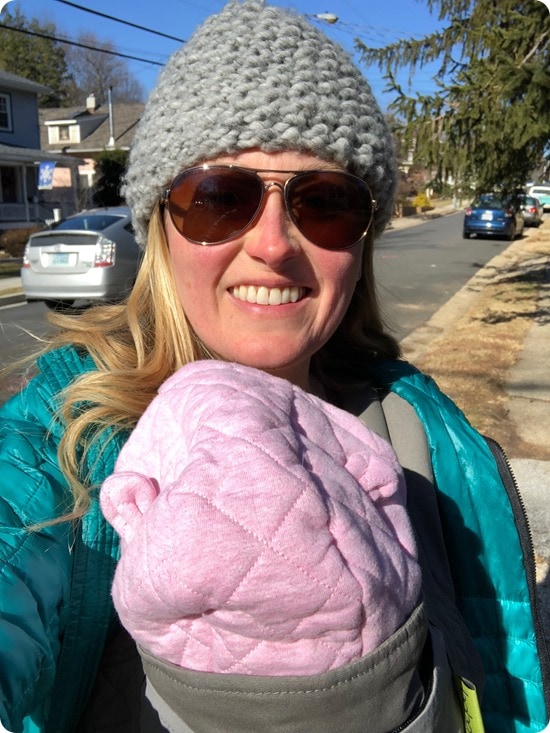 I had some of the leftover Asian Sheet Pan Salmon with leftover edamame slaw and quinoa and avocado for lunch, yum. 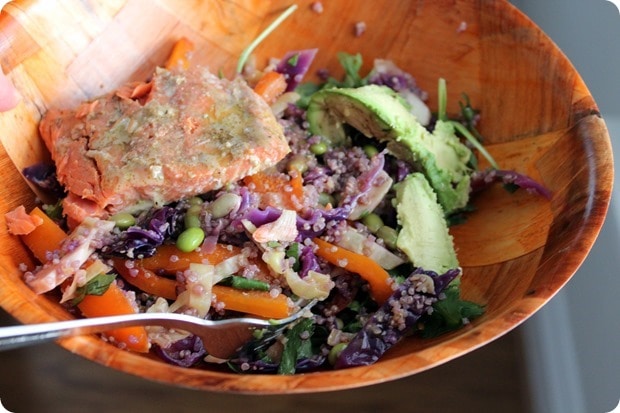 In the afternoon, we went over to my friend Heather’s to meet her new baby boy! He’s 2 weeks now and such a cutie with a TON of hair. The four of us + the babies all went for another walk and then we hung out for a bit at their place and caught up. So good to see them, and to meet their adorable little man! He was snoozing the whole time so I just have a picture of me and Heather (with Riese’s head poking out). 🙂 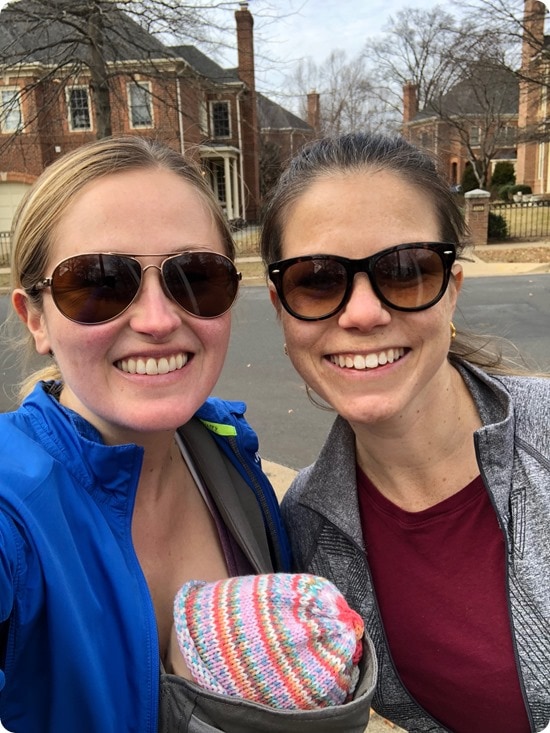 Saturday night we decided it would be fun to order pizza! Yum. We had that + some homemade salads I threw together. 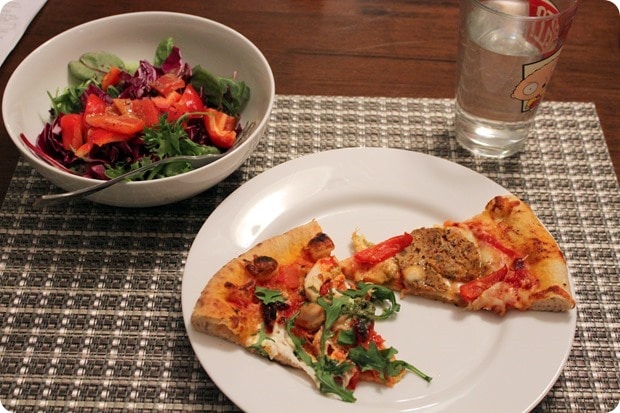 And then I spent the rest of the night on the couch with Riese reading The Fifth Trimester. I just started it but so far I’m enjoying it – helpful to read advice and tips from people who have been there before with this whole new mom thing, especially as I’m navigating the emotions of juggling baby time and ramping back up my work schedule again already. 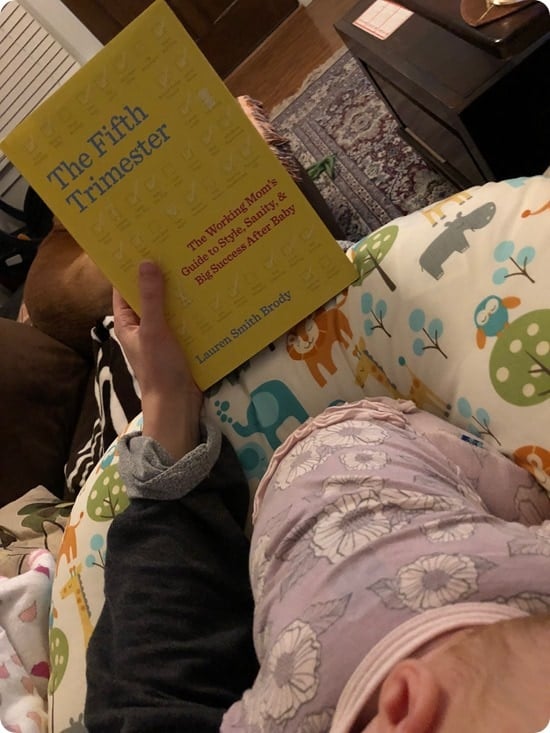 Yesterday was another low key day – it was rainy so no family walks, but I got out for a yoga class while Matt and Riese had some nice daddy-daughter time so that felt really good to get in some stretching. The rest of the day was spent hanging out with Riese and doing some stuff around the house! We made a really yummy Chicken Tortilla Soup last night, using our Instant Pot (I bought the 6 quart one) for the first time! I bought this back when I was pregnant and then hadn’t used it yet since I wasn’t super into cooking while pregnant, so it was nice to bust it out. The soup was delicious… I’ll share the recipe next week, so stay tuned! Really fast and easy. 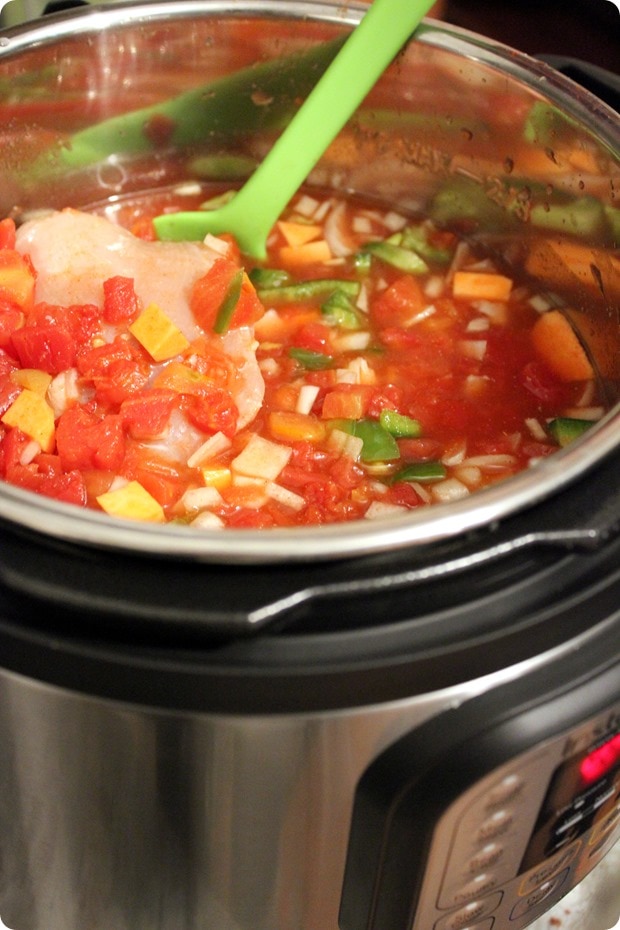 Okay so now for the life/real talk update. So… remember how I shared that after a bunch of interviews and research we had hired a nanny? And that she was supposed to start full time this morning? Yeah, well, when I woke up at 12:45 last night to feed Riese, I saw a text from her at 10:30 that said she decided she wasn’t going to be able to work for us after all. Seriously? Less than 12 hours before she was supposed to show up for her first day of work? It’s all just really confusing and bizarre and of course now I’m like “was it something I did? or said? or…?” Last time we talked a few days ago after contract negotiations she said she was really happy and excited, so the only thing I can think of is that she got a better offer and didn’t have the guts to say that (she said something in her text about how she needed the family she worked for to allow her to bring her granddaughter with her to work so this wouldn’t work out… but she’d never even mentioned a granddaughter to us before or asked us about that?! And when we responded saying we were confused and that we could have discussed that if she had mentioned it, she just replied “sorry that’s all”.) So… yeah. Total fail.

It feels really overwhelming to have to start the childcare search all over again… we didn’t feel strongly enough about any of the other nannies we interviewed to hire them. The bright side is that we have a better idea now of what we want in terms of hours than we did when we started the search, so we can be more clear upfront with what we are looking for. I think I’d like to try to compress my work schedule to 4 days per week, and then spend 1 day at home with Riese just the two of us, no work involved. I feel incredibly grateful to have the flexibility to do this, and I hope we can find a nanny that is okay with this schedule. The hours will still be pretty much full time (we are thinking 36 hours per week), so we’ll see.

On top of the nanny situation, we are also having some feeding issues. At Riese’s 2 month pediatrician appointment last week, the doctor said Riese was healthy but he would have liked her to gain a bit more weight than she had. He wasn’t concerned enough to ask to see her any sooner than her standard 4 month appointment, but of course this sent me into a mom guilt “oh my gosh, have we been unintentionally starving our baby this whole time?!” situation.

The pediatrician suggested that I add more fat to my diet because he randomly assumed the issue was the fat content of my milk, but of course I went and researched that online and research shows that while you can change the type of fat in your milk based on what you eat, you can’t increase the actual fat content. (Kelly Mom has more info on that… that site is so helpful.) So… yeah. I think the issue is actually Riese’s shallow latch, which has gotten worse recently. She has started taking longer and longer to eat and then still seems fussy after some of the feeds, and we experimented with giving her a bottle of pumped milk a few times over the weekend shortly after I tried to feed her from the breast, and she took down the bottles, which made me feel terrible because clearly she hadn’t gotten enough already and it felt like my efforts were being wasted. Things came to a head last night because I was really exhausted because I hadn’t slept at all due to being upset about the nanny situation, and then I spent 2 hours trying to get Riese to feed from 5 to 7 a.m. before finally bursting into tears and asking Matt to give her a bottle, which she downed. Time to see a lactation consultant ASAP to see if they can help me figure out what’s really going on.

The good news is that 1) we are incredibly lucky to have my mom nearby. She came over this morning to help so I can spend time researching nannies and setting up more interviews, set up an appointment with a lactation consultant, and meet my work deadlines. And 2) We have Riese, and for that we are so, so grateful. No matter how tough things feel sometimes, I know we are really fortunate to have a baby – and a healthy one at that. Her smiles have gotten so much bigger and more interactive lately – they continue to melt my heart, and I feel so lucky to have the opportunity to be her mama. 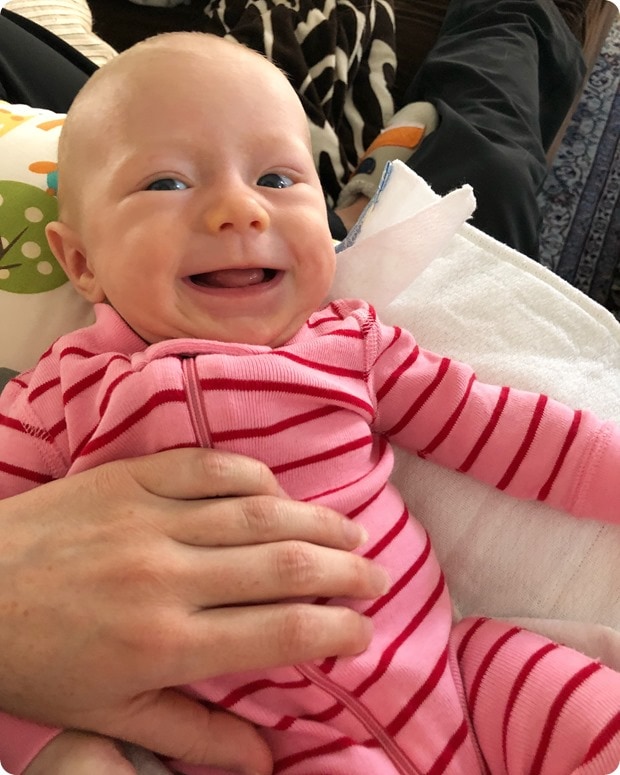 Time to get to it… thanks for listening to my rambling today, guys. It helps to write it all out. 🙂 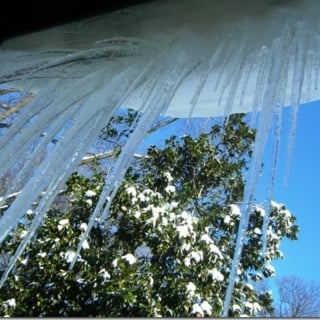 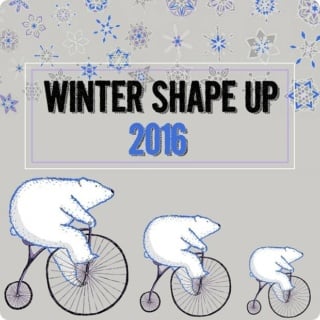 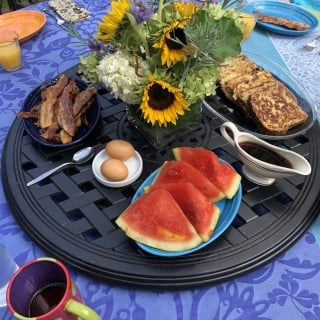 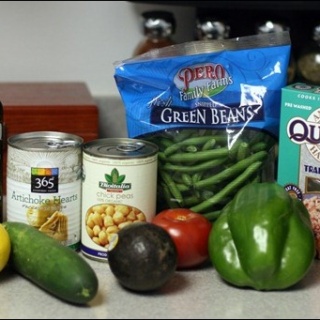