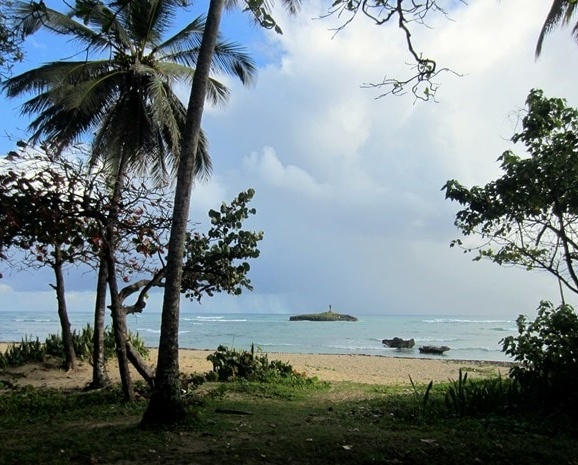 Running in the Dominican Republic

I’m on my way back to DC right now from quite the adventure, as most of you have seen via Instagram! I spent the past 5 days on a press trip in the Dominican Republic courtesy of their tourism ministry. Such a cool experience – I felt so lucky to be there! I’ll be sharing a couple posts with the details about the trip, which was adventure/fitness themed (right up my alley!), but for now, I thought I would pop in while on the plane home to share a quick recap of the runs I got in while on the trip, plus details about where we stayed, in case you’re interested in going there yourself! 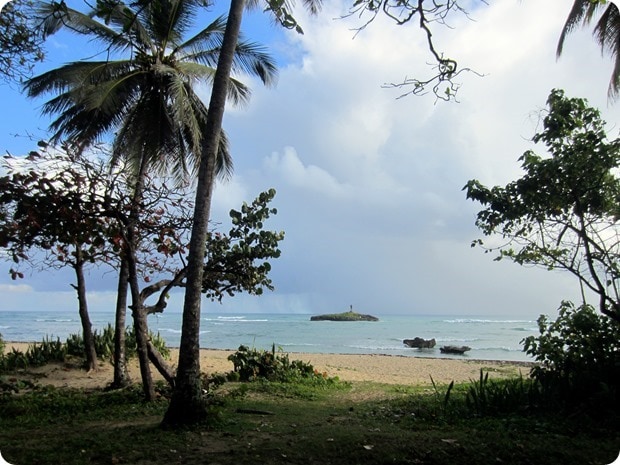 While in the DR, I covered a total of 17 miles via my running shoes, broken into three runs – a 6 miler, a 4 miler, and a 7 miler! My favorite way to explore. 🙂 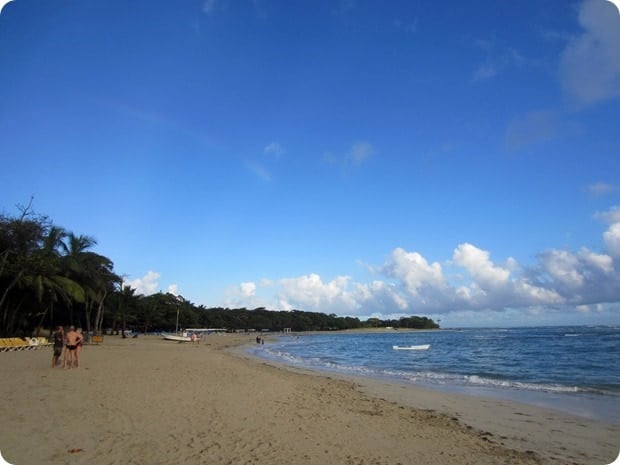 I did all the runs with my friend Sarah! She’s training for a marathon in April, so she was fully on board for runs on the trip, which was awesome. You guys know I always like to have a running partner in crime. 🙂 We had a lot of fun catching up over the miles! 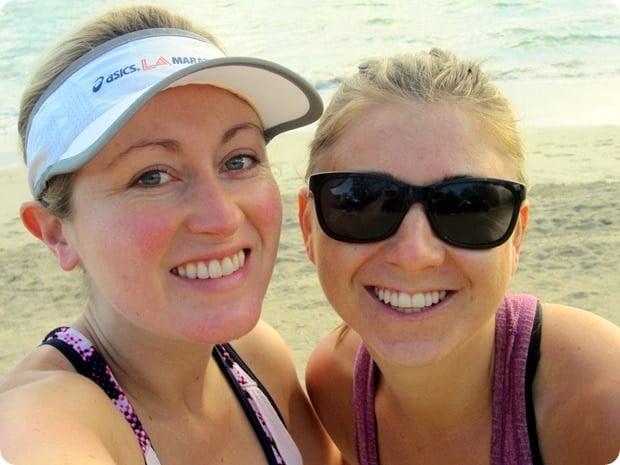 Considering the last run I did before this trip was in a blizzard, it was insanely awesome to be running in shorts and a tank. I felt so unencumbered!

The first run Sarah and I did together was on the night we arrived – last Thursday night. We both connected in Miami and had the same flight from there to Puerto Plata, and it was delayed, so we missed the welcome group dinner and were instructed to do whatever we wanted when we got in. After a long day of traveling/sitting, we were both pumped to throw on our running shoes and explore a little! 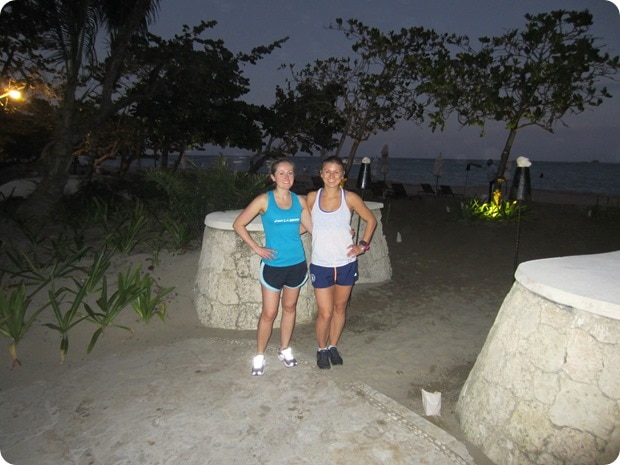 We stayed at the beautiful Casa Colonial boutique hotel the first two nights of the trip, so we ran around the hotel compound (there were a bunch of other hotels in there, too, so it was large) for simplicity/safety since it was dark. That hotel would be wonderful for a honeymoon, by the way – it was small and very luxurious/romantic. Highly recommend!

6 miles later and we were ready for dinner. 🙂 Weird to see a Garmin photo without a jacket and gloves! 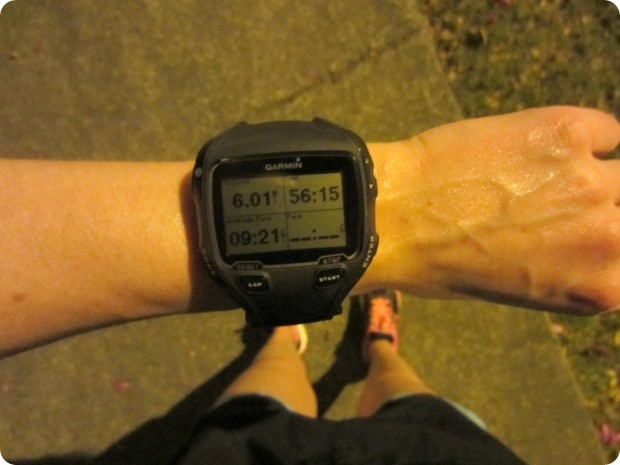 Our second run of the trip was a rainy 4 miler (I started my watch late) on Sunday morning, completed around the grounds of Sea Horse Ranch, where we had the pleasure of staying (in a Villa – it was amazing) on Saturday night. It POURED on us but we had fun with it – I always feel like a kid again when I run in the rain. It was warm out, so it felt nice! 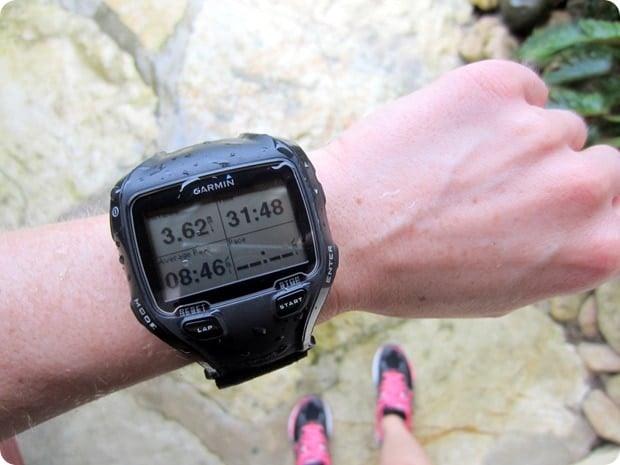 Our final run was this morning in Puerto Plata! On the last two nights of our trip, we stayed at the Iberostar Costa Dorada, which is a large all-inclusive resort – would be great for groups/families. Sarah and I started our run on the beach (slowly – it’s SO HARD to run in sand!): 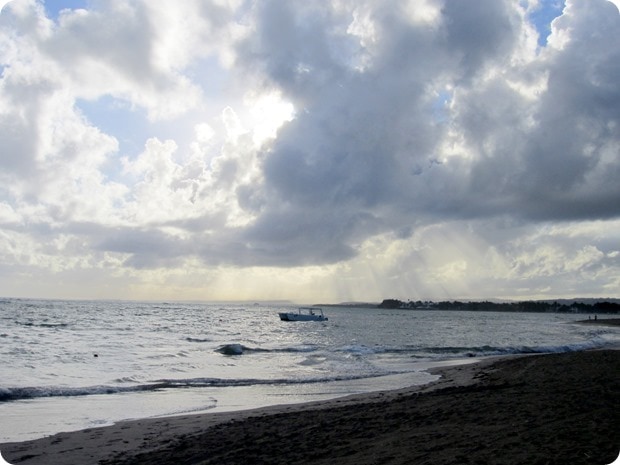 And then decided to run into the town, where we heard that we could “turn right after the baseball stadium” to find a nice running path along the beach. 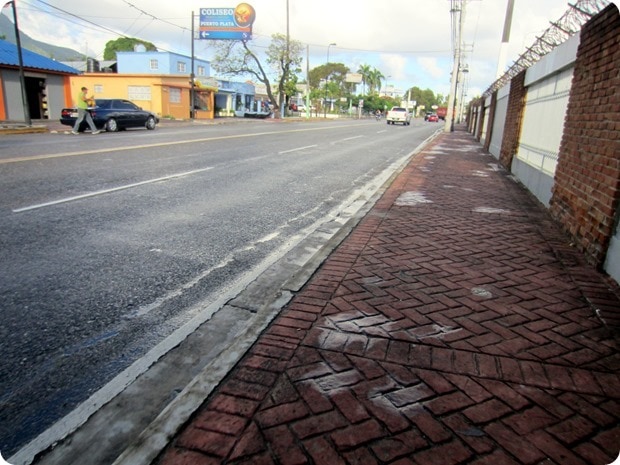 We ran along the road for awhile, which was a little loud with the traffic, but cool to see more of the real town outside of our resort bubble. 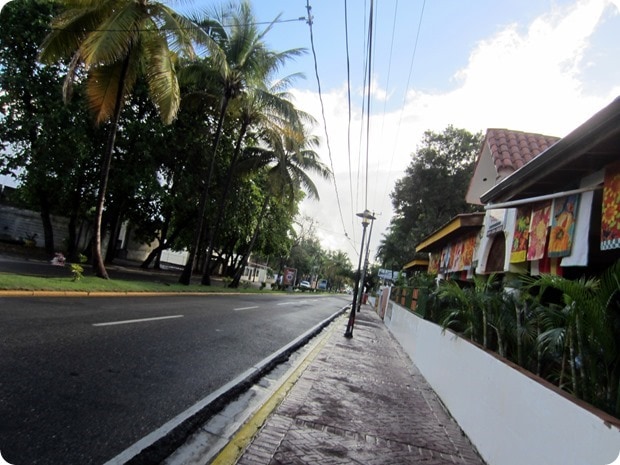 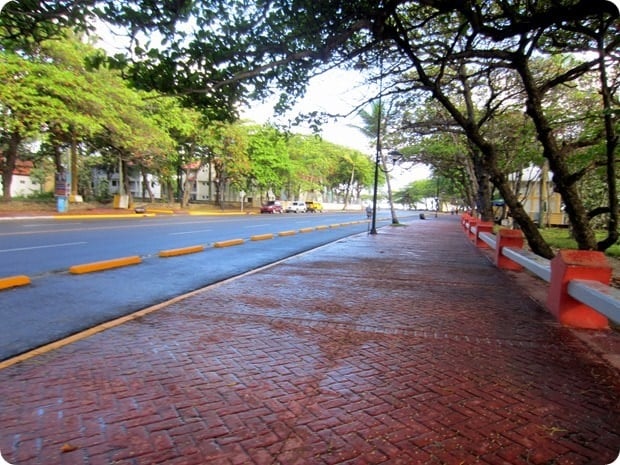 The view to our right: 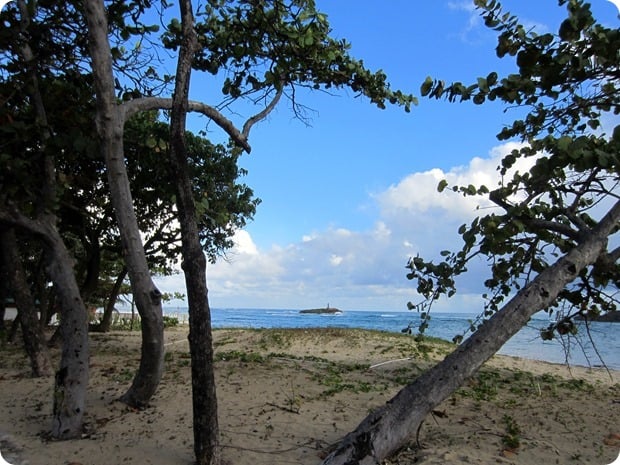 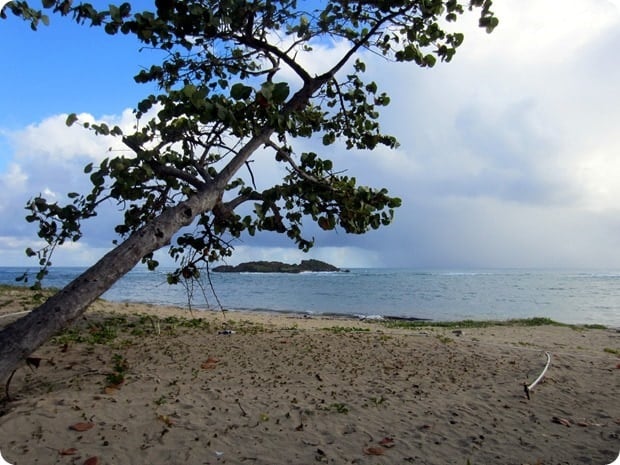 Does anyone know what the statue on this island is? We were so curious! 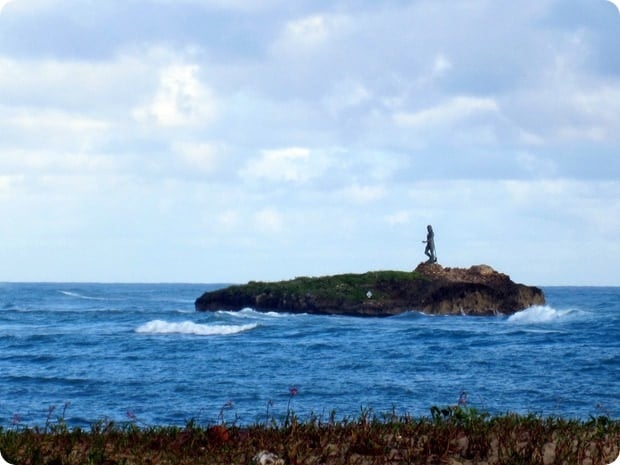 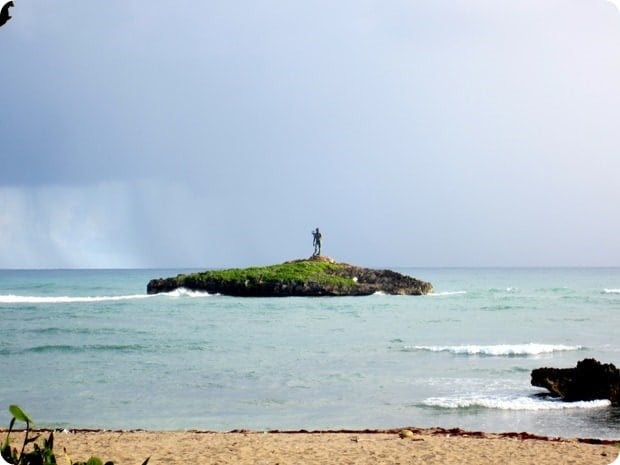 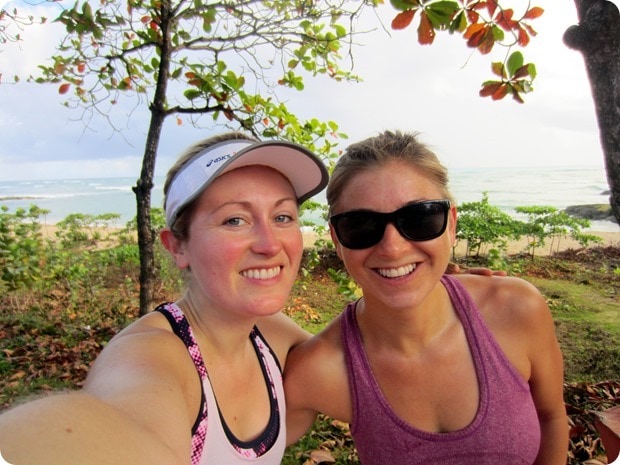 From there, we decided to attempt to run back to our resort on the beach instead of via the road. All was well, until we hit this: 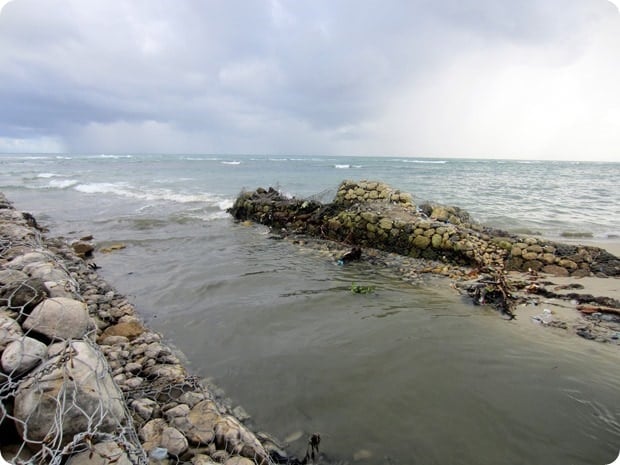 Uh oh. How do we cross?! It was deeper than it looks (and filled with trash, yikes): 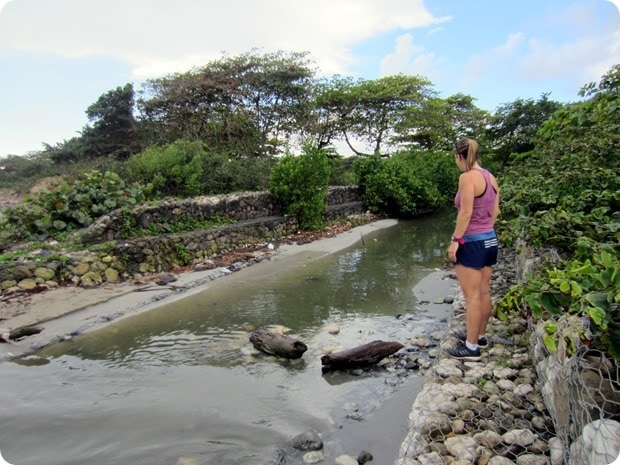 We made friends with a group of local guys who were out running for baseball practice. They also couldn’t figure out a way to cross the water! Back we all headed. 🙂 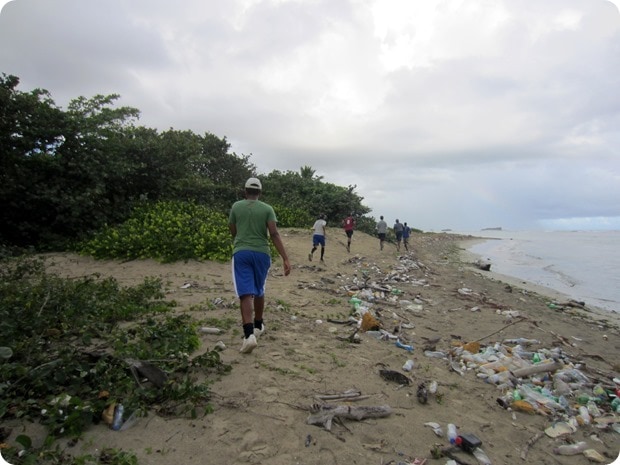 We followed them on a short cut through the woods, then made our way back to our hotel the same way we came. Oh well! 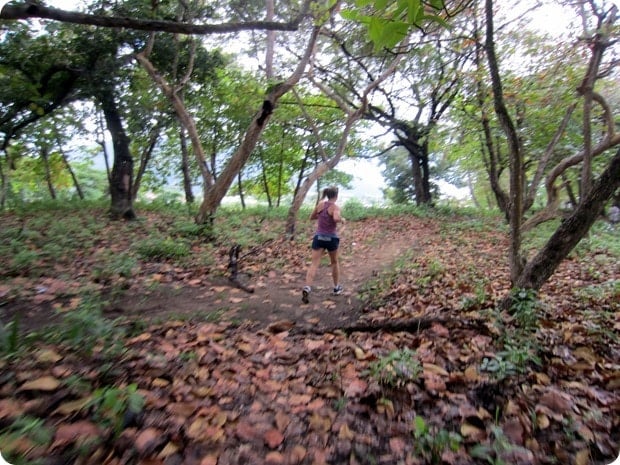 Nearly 7 miles, done! Decent pace, too, especially since some of it was on sand. 🙂 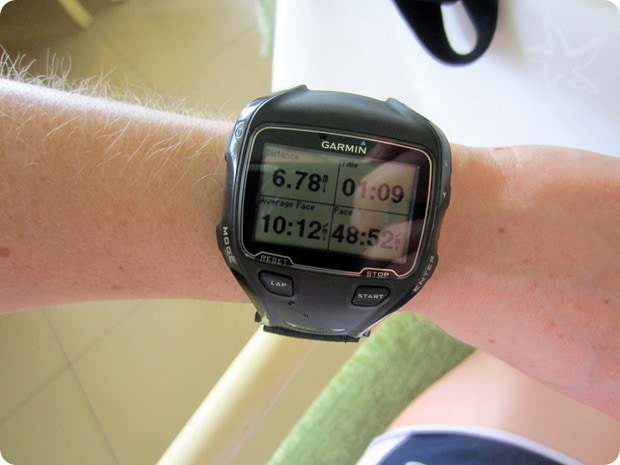 I was supposed to do a final long run (10 to 11 miles) before the Rock ‘n’ Roll DC half marathon in a week and a half while on the trip, but it didn’t end up happening. We had really early starts most of the mornings so there wasn’t time for much besides what we did, and by this morning, when I actually would have had the time, I was super tired from all our adventure, and also didn’t want to do an extra 3 or 4 miles solo! Oh well. I was happy I got in any miles. 🙂

I’ll be back to share more adventures over the next few days – planning to do one post about our food and one about the fitness/outdoorsy adventures. Stay tuned, and a huge thank you to the Dominican Republic Ministry of Tourism for having me and covering my expenses for this trip! 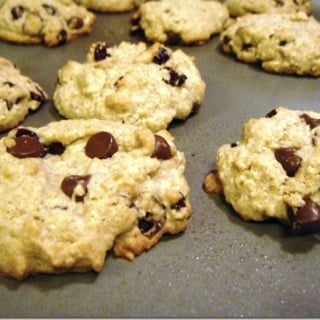 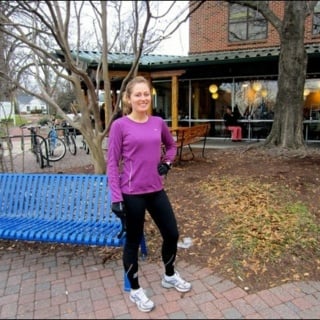 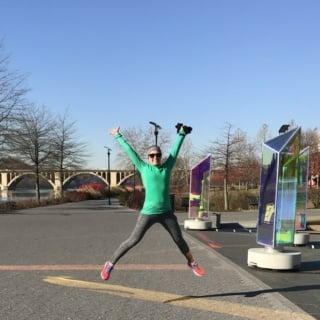 Thoughts on Running and Life 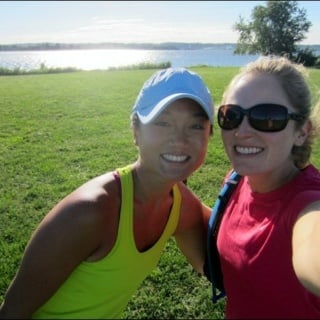