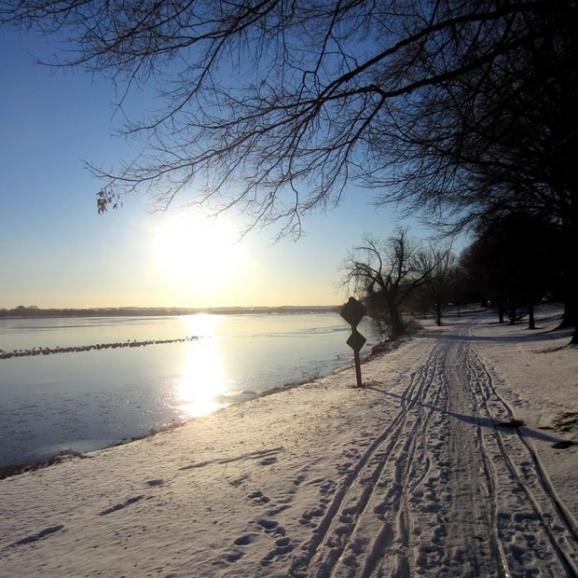 The Coldest Run Ever.

This morning’s run wins a new accolade: it was officially the coldest run I’ve ever done. 12 degrees, with a “feels like –2 degrees” situation from Weather.com due to the wind chill? Yeah, it was really freaking cold. But you know what? It was worth it to spend the morning looking at views like this. 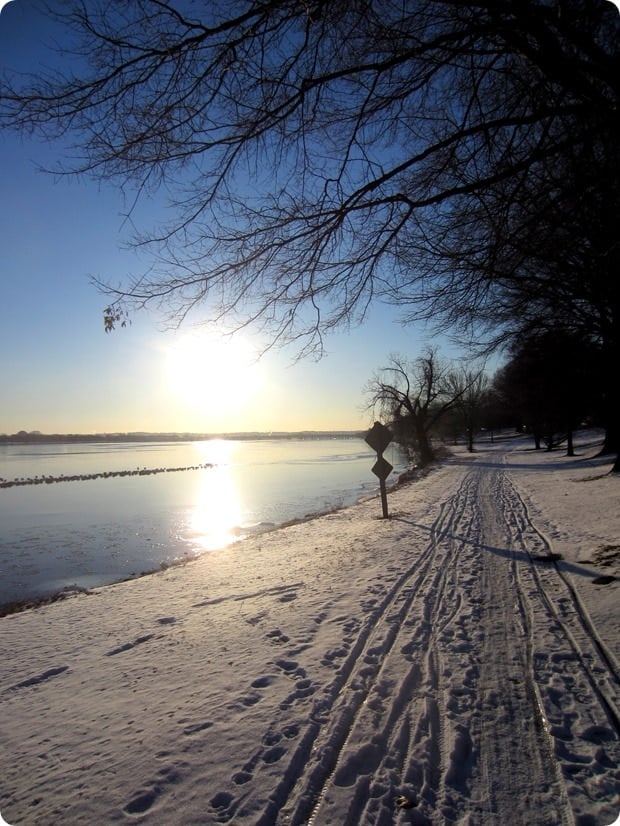 Even when it’s this cold… the great outdoors still wins out over the treadmill.

It helped that I had someone crazy enough to be out there with me – my buddy Mary, who I can always count on to be on board for ridiculous running conditions. (Her fuzzy Christmas tree hat cracks me up.) 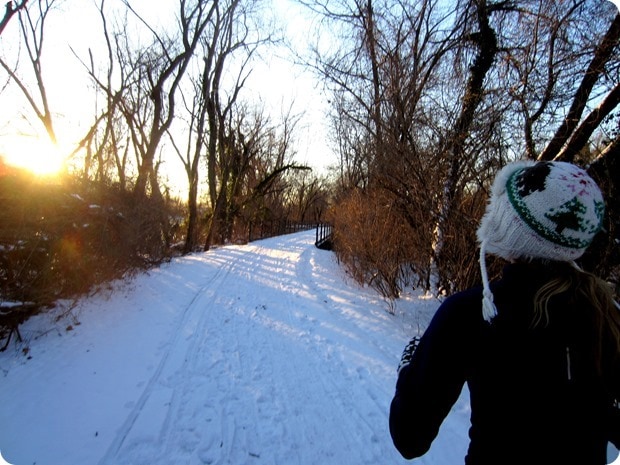 We did give ourselves the luxury of meeting later than normal – a civilized 7:30 a.m. – so that we were at least running in freezing sunshine rather than freezing darkness. It was such a treat to not be running in the dark! 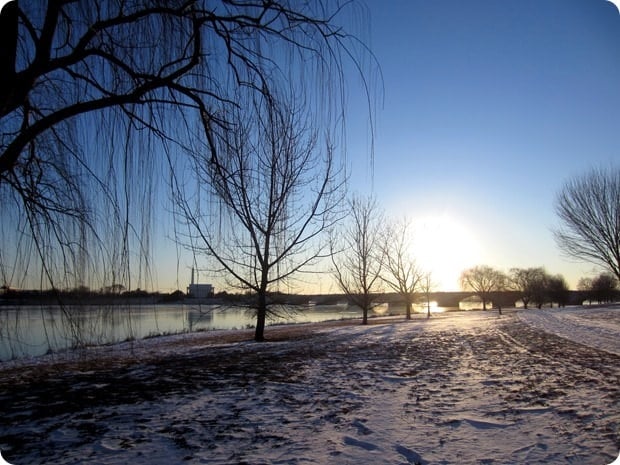 We decided that even though the trail was likely an icy/snowy mess, it would be worth the views to run down towards the water. We were right on both counts. 🙂 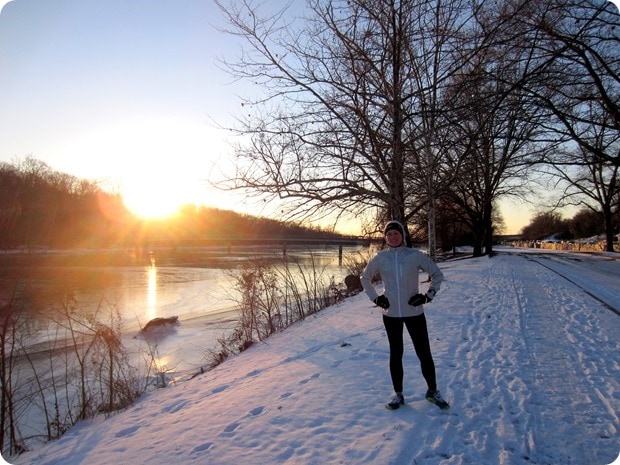 Honestly, it was super super cold, but it really wasn’t that bad once we got moving and distracted by chatting. I wore my warmest tights (although my hips/butt ended up pretty cold by the end of the run – no link for the tights because they’re really old), my warmest gloves, a short sleeved tech tee, an old warm running jacket, and then my new Asics lightweight rain/wind jacket over it, which was perfect to block the wind. I put the hood up, too, and wore an ear warmer underneath! My core felt great, but my exposed face was pretty cold, though – probably could have used a mask. 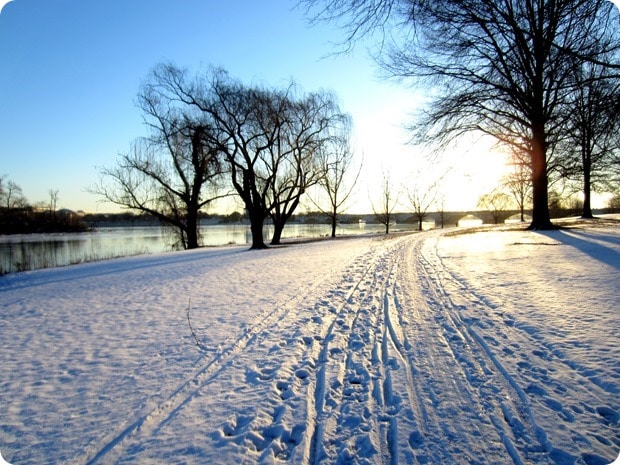 Anyway! I definitely wanted to bail on this run when I saw the weather, but I’m so glad I didn’t. We ended up covering about 6 miles (some of it rather gingerly/slowly on the snow) and it felt great to get a little fresh air. The hardest part of winter for me is being cooped up most of the day! 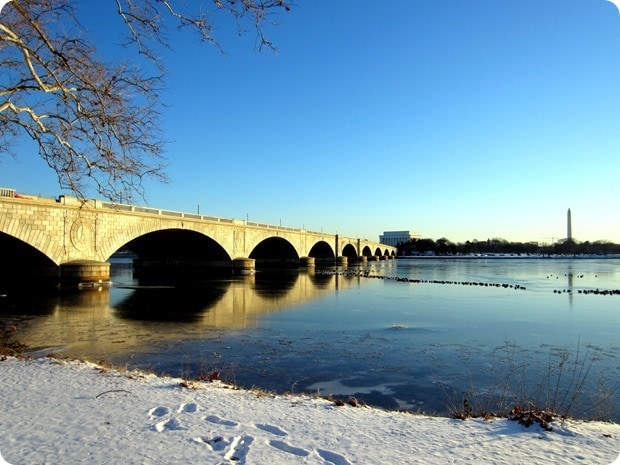 Thanks, Mary, for being as insane as I am. 🙂

In other workout news, I did something on the other end of the spectrum last night: a hot yoga class at Studio DC Dupont with my friend Karen. A warm room and a really nice vinyasa flow on a cold night? Perfection. 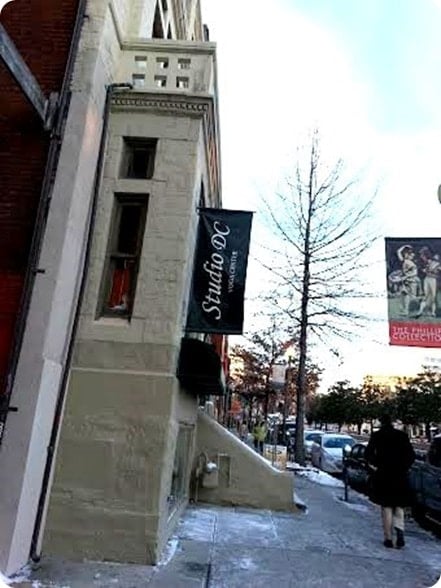 Dupont was looking so pretty in the snow on my walk to the studio! 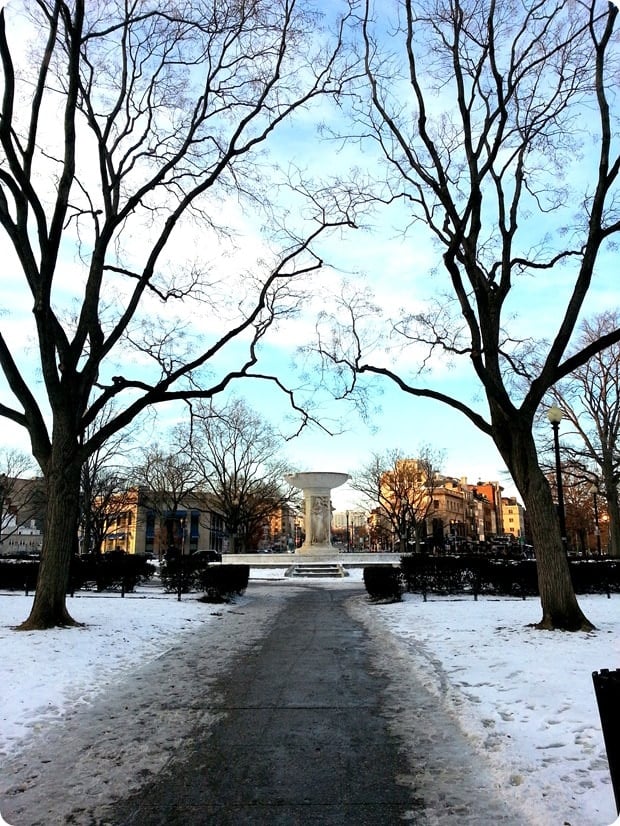 We grabbed a sweaty Sweetgreen dinner after the class, and I tried their new rice bowl – so good! I believe it was wild rice, kale, chicken, apples, dried cranberries, pecans, goat cheese, and balsamic vinaigrette. YUM! Plus some of their tasty bread. 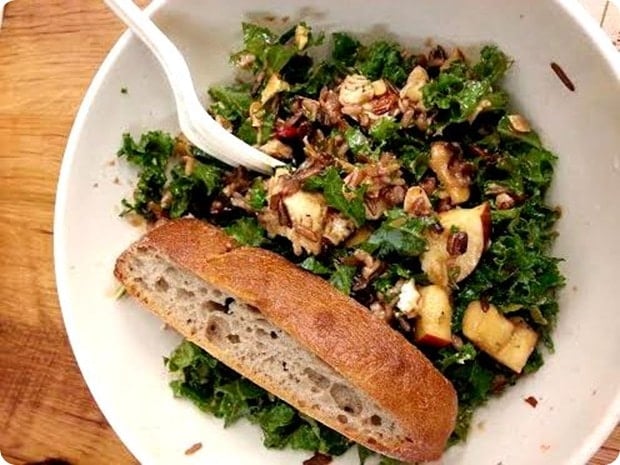 And now, in other exciting news: the Winter Shape Up challenge information is now up on the blog! It officially starts Monday, but Gina and I launched it today so that you have the weekend to prep and get ready. Check out this page for all the details, including a link to the week 1 meal plan and grocery shopping lists. We hope you’re as pumped as we are and can’t wait to hear how you guys are doing with it!

Time to pack up and finish up some work before rushing out the door – Matt and I are headed down to North Carolina this weekend (we were supposed to go 2 weeks ago but had to postpone) to meet our new nephew, and swinging by Chapel Hill tonight on the way. Excited!

Have a great weekend, friends!

What’s the coldest weather you’ve ever run in? I bet some of you midwesterners and Canadians have today’s temps beat by a landslide! 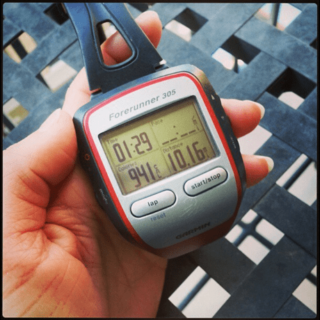 Back in Double Digit Land 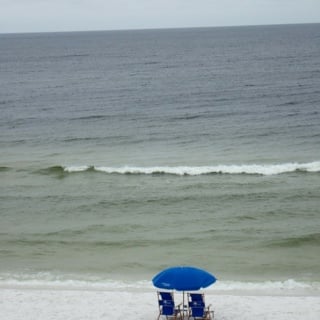 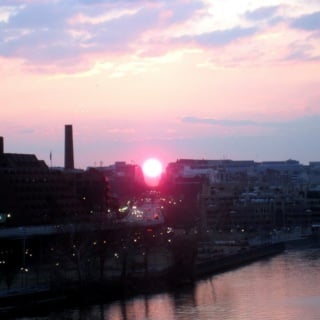 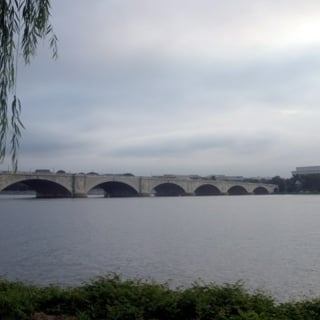