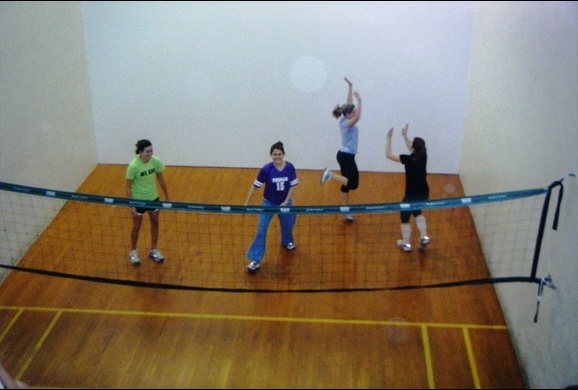 Walleyball is my new favorite sport 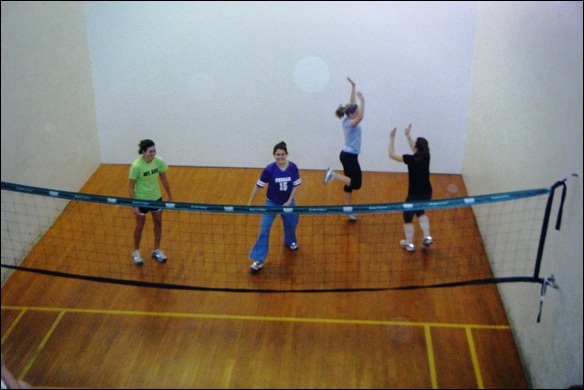 My grad school friends and I have decided to act like we’re undergrads and have signed up for a number of intramural sports, including the epic Walleyball. Hahaha. 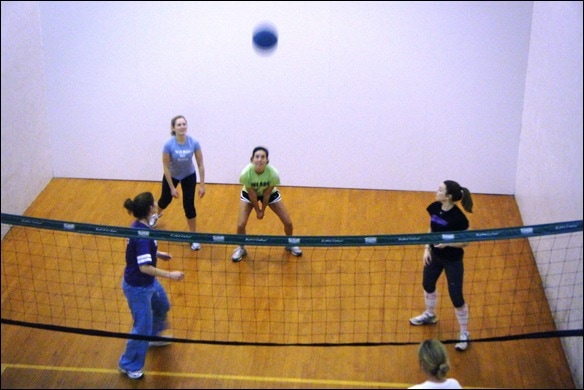 What’s Walleyball, you ask? Well, apparently it’s volleyball, but in a racquetball court so you can use the walls! 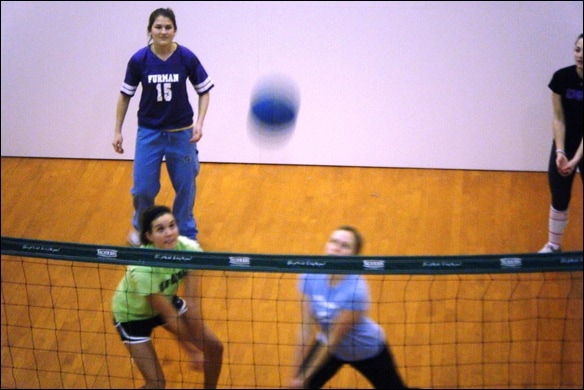 It was SO much fun. Since it’s female-only, we nominated Tyrone (the lone male in our MPH Nutrition program) as our coach, hehe. He came last night to support his team (aka laugh at us) — and also to be our photographer 😉 (And yes, Lauren is wearing a Santa hat. That’s how we roll.)

I’m pretty sure the other team hated us because we clearly had no idea how to play and spent half the game laughing when we missed the ball, lol. Case in point, this hilarious video Tyrone took of us at the very start of the game when we REALLY had no idea what was going on:

Heh. I love how in the end of the video I’m like “Okay ladies, we need to get it together!!” And we actually did pull it together in the second game and came back to nearly beat them, 16 to 21! I even scored a streak of points with some pretty sweet serving skills 😉 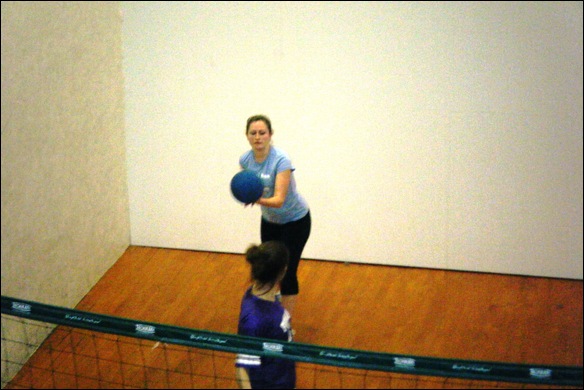 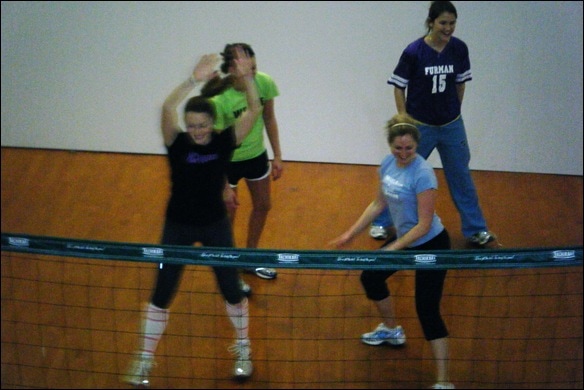 Lol. Even though we got destroyed, intramural sports rock — exercise AND fun with the girls all wrapped into one! We’re also signed up for intramural Inner Tube Water Polo?!? It starts next week — should be hilarious.

In other news, I did a real workout yesterday morning as well! Because as you know Tuesdays = track Tuesdays. 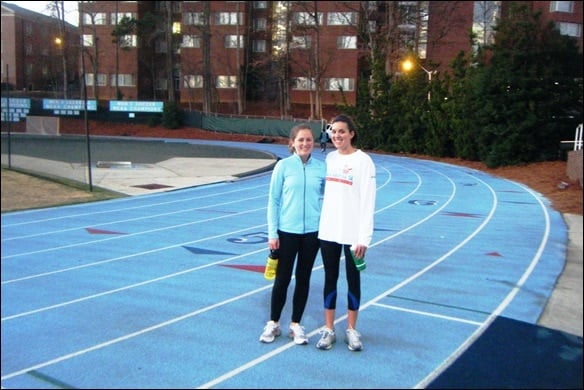 I met my friend Jillian bright and early at her place as usual to jog the 1.5 miles to the track! The plan this week was to do a repeat of our combination boot camp/sprinting workout from 2 weeks ago, but between Jill being sick all last week and me running 7 miles on Sunday instead of Saturday, both of us were feeling pretty tired and stiff. In light of that, we decided it would be smarter to nix the sprinting this week and just focus on the boot camp/strengthening moves instead 🙂 No need injuring ourselves with sprinting when our muscles are already tired! 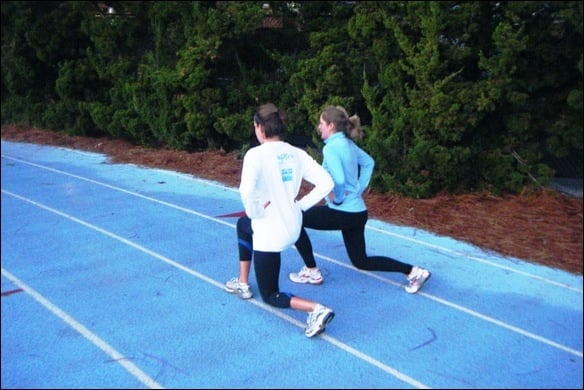 It was fun and pretty nice out — a bit warmer than usual at that early hour! 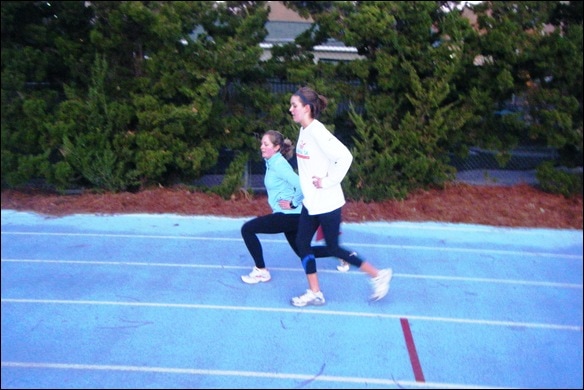 In between the boot camp exercises, we ran around the track at about an 8 minute/mile pace. 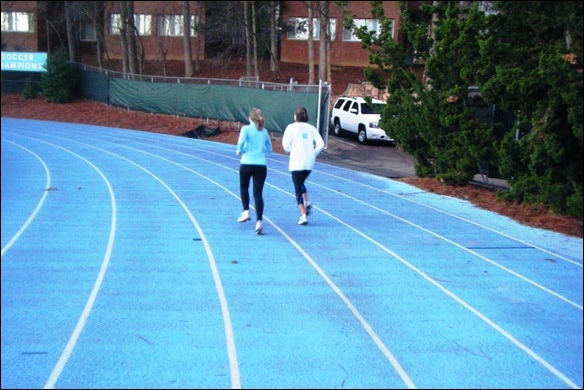 Incorporating some arm work in the form of dips: 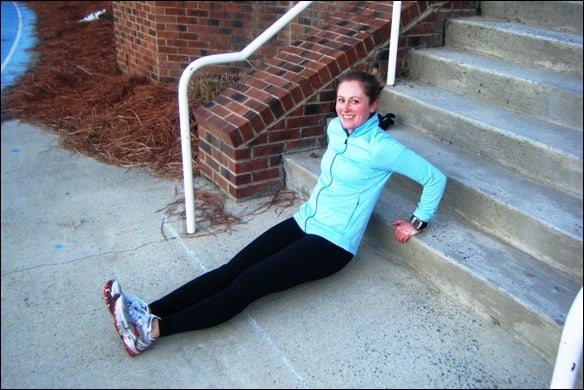 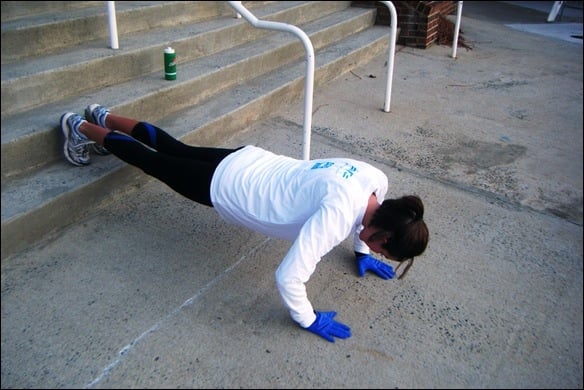 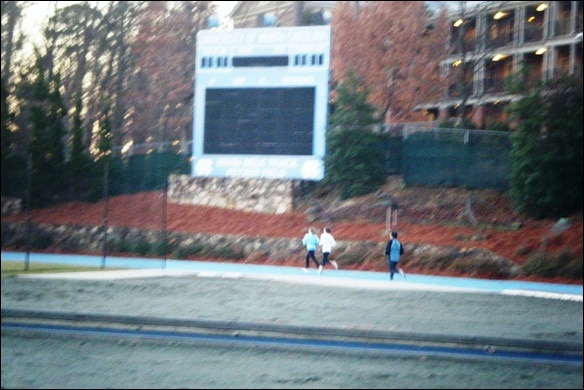 (Thank you to our friend Lauren who was also at the track and took these photos!)

The rest of yesterday was spent in class and STUDYING! We have two tests tomorrow, one in Food Service Management and one in Medical Nutrition Therapy, our really hard med school-esque class. It’s really interesting stuff but LOTS to learn and remember! We’ve been learning about diseases/disorders and malabsorption issues, such as gastritis, celiac disease, cystic fibrosis, esophagitis/gastric reflux, achalasia, lactose intolerance, dysphagia, etc., and how to treat them all nutritionally. I spent about 40 minutes on the elliptical with my flash cards this morning and will be doing the same tomorrow! Multitasking is key 🙂

Have a great day! And stay tuned because tomorrow I’ll be posting a delicious new recipe for a quick and easy wholesome on the go snack!

Question of the day: What’s the most random sport you’ve ever played? 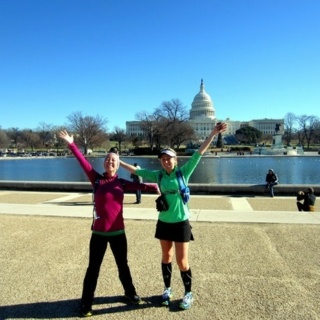 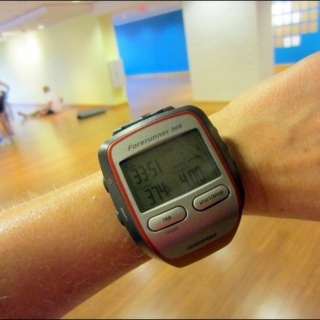 The Awesome Workout that Almost Wasn’t 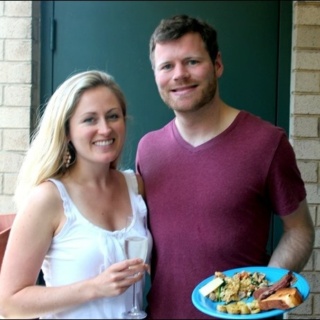