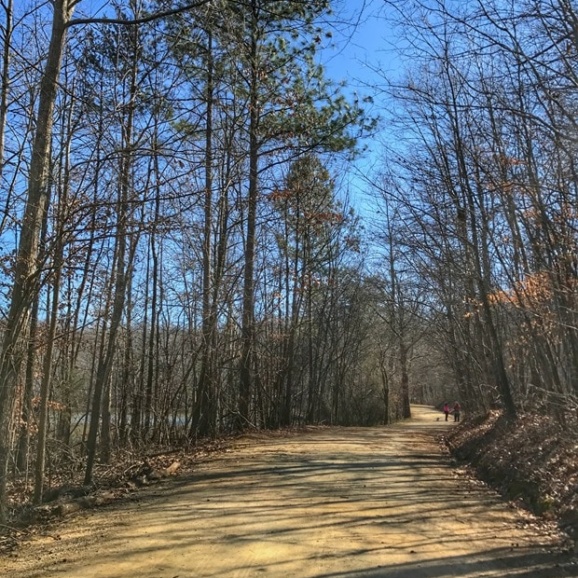 Hey guys! We’re back in DC after spending the weekend down in North Carolina with Matt’s brothers and their families! Man, I really missed those blue skies and the sunshine – it felt good to get out of the gray for awhile (although apparently DC was sunny this weekend too)! 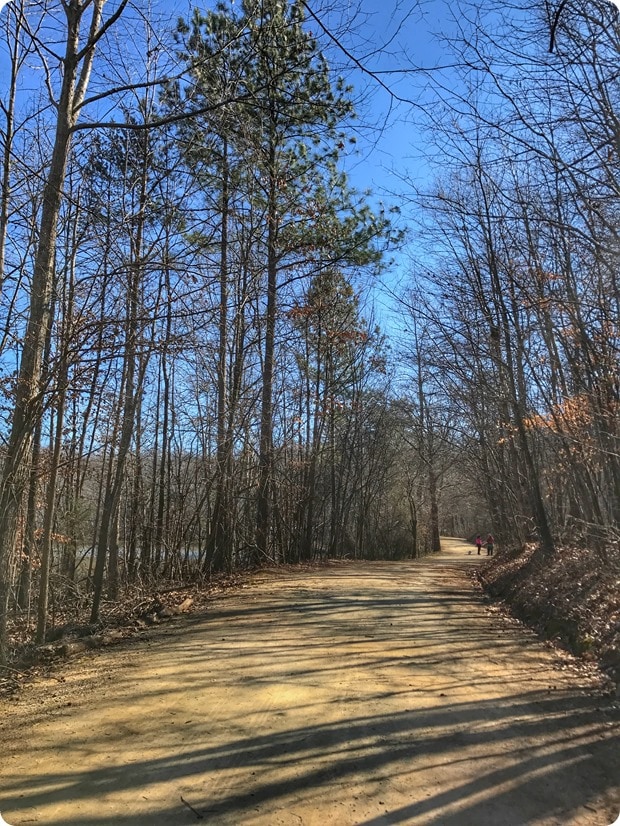 Matt and I drove down Friday afternoon and arrived in time for dinner. His older brother Chris, his wife Jess, and their sons Nate and Charlie live in Winston-Salem and Matt and I and Matt’s younger brother Drew and his wife Morgana made the trek so we could have a fun sibling weekend!

On the menu for dinner Friday was Mellow Mushroom: pizza + salad + wine! We also had some unpictured birthday cake and ice cream after for Chris’s birthday, which was earlier in the week. 🙂 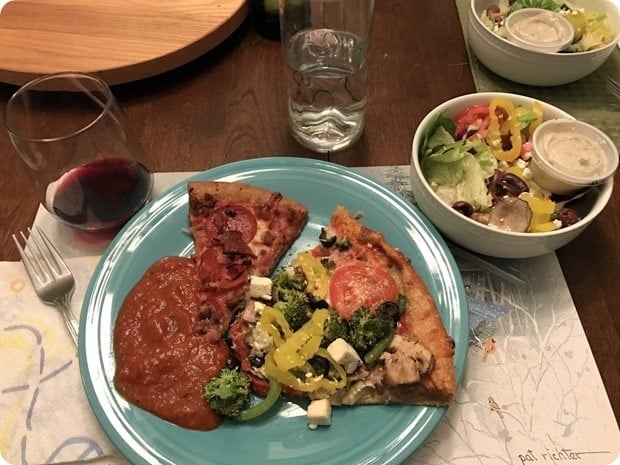 I love that Mellow Mushroom puts legit veggies on their veggie pizza – it’s not 1 piece of pepper or 1 spinach leaf like some places. And yes, that’s an enormous pile of sauce – gotta have extra for crust dipping! The meat pizza was a gluten free crust for Matt – I actually liked that crust better since it was crunchier!

We were staying at our hotel near their house, so on Saturday morning Matt and I were both in the mood for a workout and hit up the hotel gym. (We originally planned a run, but it was in the teens – what the heck NC?! – and we weren’t prepared with warm enough clothes for that!) Matt did his own thing on the treadmill and with some weights, and I did a short 5 minute warm up on the elliptical and then did two of the Winter Shape Up workout videos! 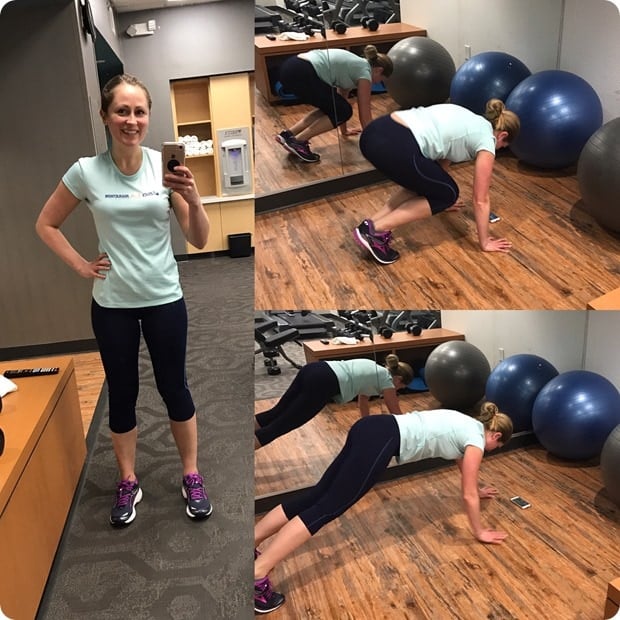 I did video #1 (a strength workout – I just did one round) and then moved on to video #4, which is a fun 20ish minute HIIT workout. They are hard but so fun – I loved getting to be in the videos this year! Gina and I had a blast filming them. 🙂 Video #4 is probably my fave… I miss those beautiful palm trees and that gorgeous weather!!

After our workouts, we headed back over to Chris and Jess’s for breakfast! 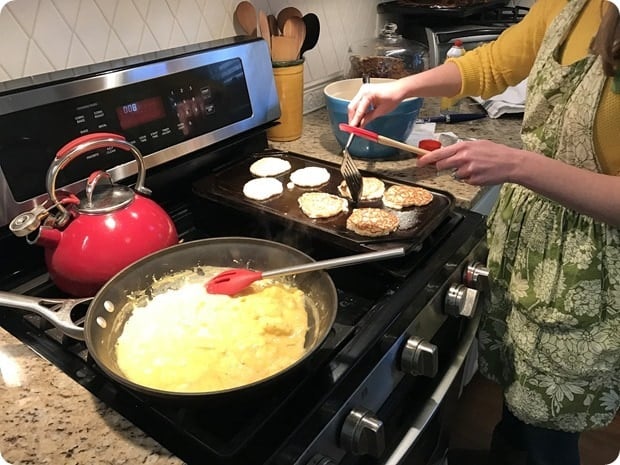 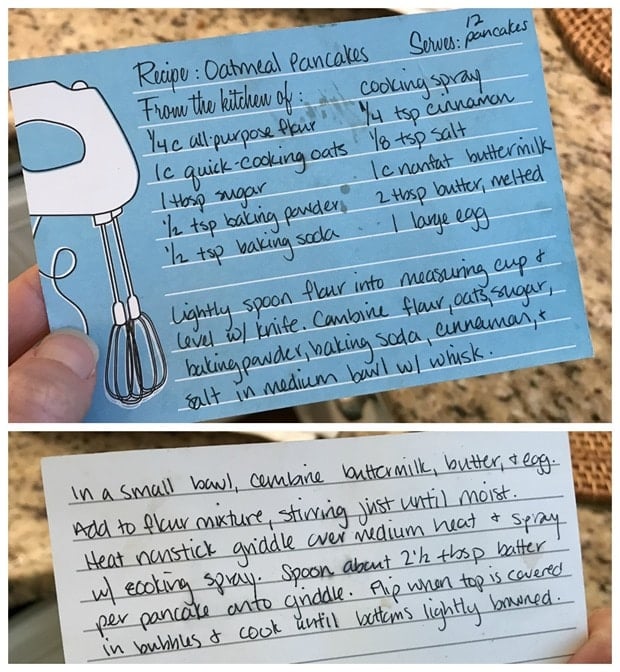 Served with some grated cheddar for the eggs and nuts, fruit, and pure maple syrup for the pancakes. 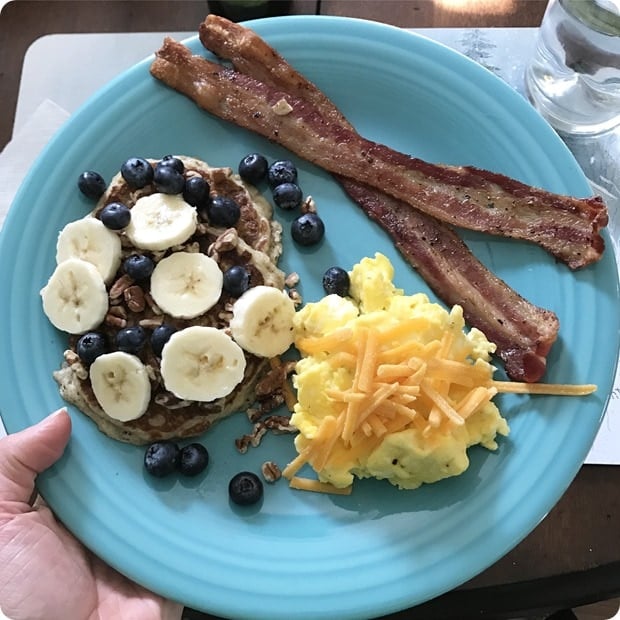 After breakfast, we hit up the Children’s Museum (which is more like a cool indoor playground) with the boys! This is Charlie – such a cutie. 🙂 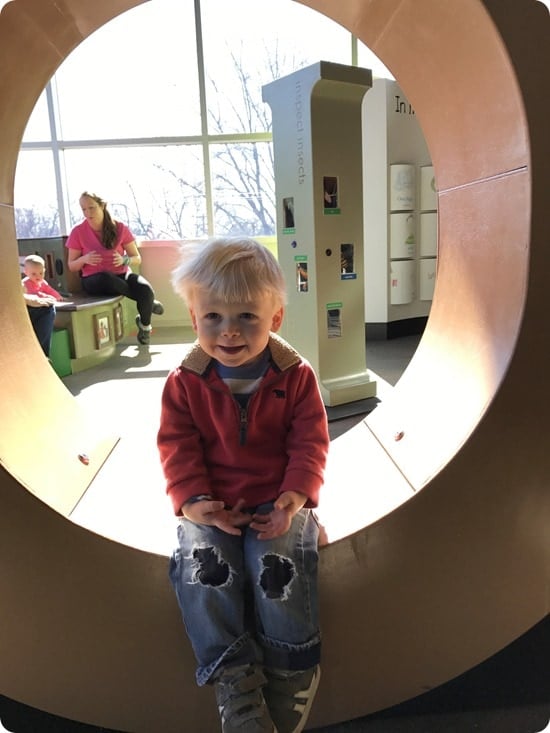 After playing, the guys offered to take the boys home for lunch and naptime so the ladies could sneak away for yoga! Jess had a bunch of my No Bake Peanut Butter Granola Bars (<- recipe) in their fridge (apparently the boys love them!) and gave us some to snack on on the way. I need to make these again – it’s been awhile! 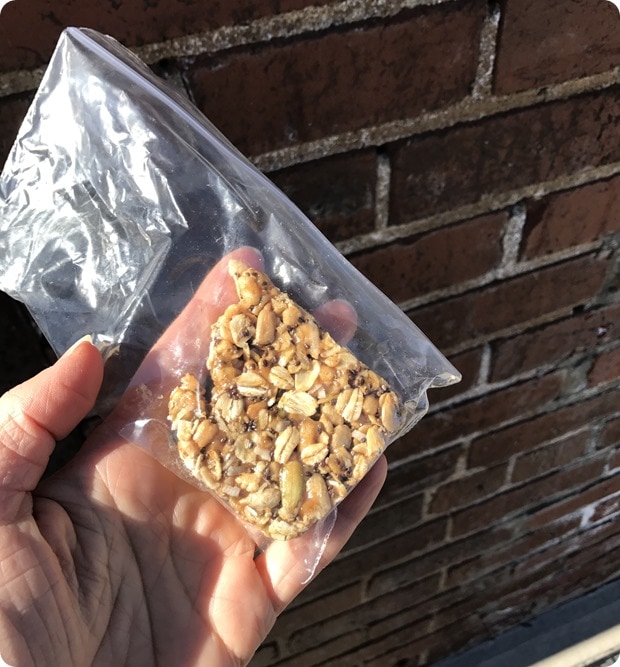 We hit up a studio downtown called Paz Studios for their 1 p.m. community yoga class. We were the only ones there for the class and the instructor pretty obviously had been hoping no one would come, I think, because she wasn’t particularly friendly or welcoming – not cool! But it was a nice calming, restorative class and it felt really good to stretch. The studio was really pretty, too! 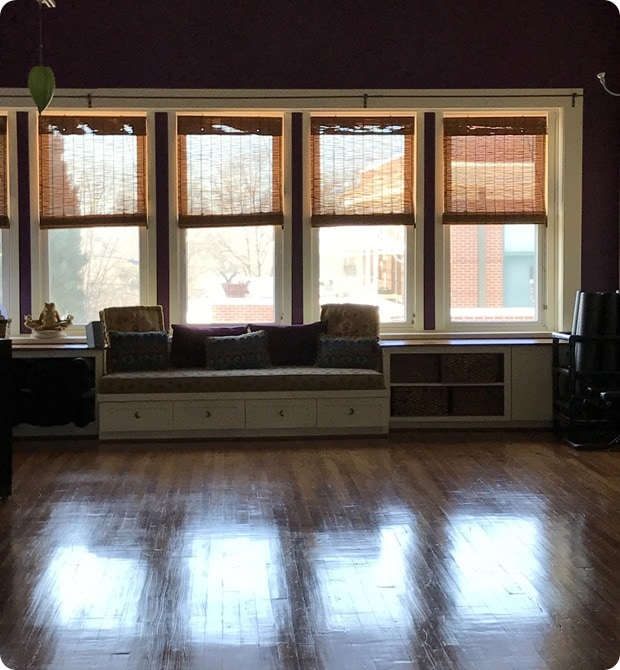 Yoga finished up at 2 and we walked over to a nearby spot called Local 27101 for late lunch. 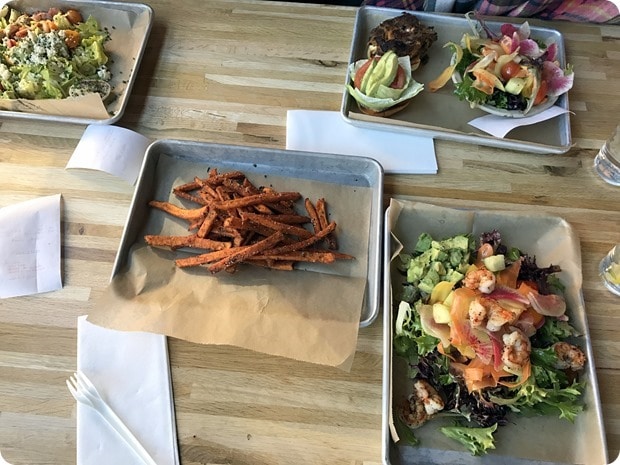 We all shared some sweet potato fries (delicious) and I had their market salad with grilled shrimp and avocado. It was phenomenal – so fresh and crispy, and I loved how colorful it was! 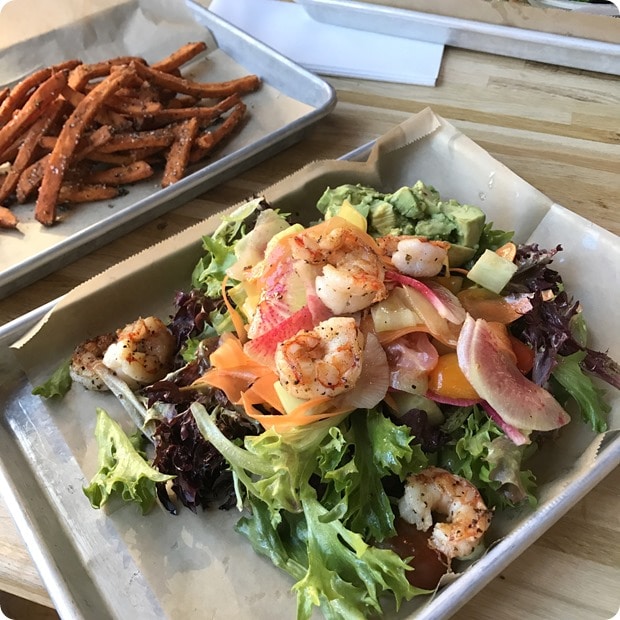 After lunch we grabbed hot drinks (green tea for me) at a cute hipster coffee shop next door and shared some pumpkin bread, because it looked delicious. 🙂 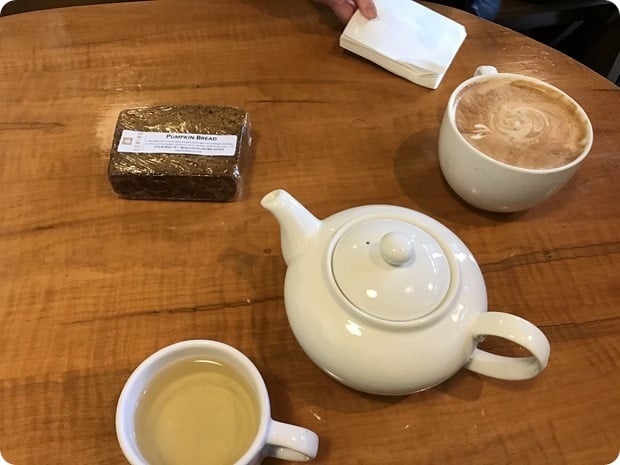 It was so nice to have some one-on-one time with my sisters-in-law – I don’t think we’ve ever had the chance to do that before! 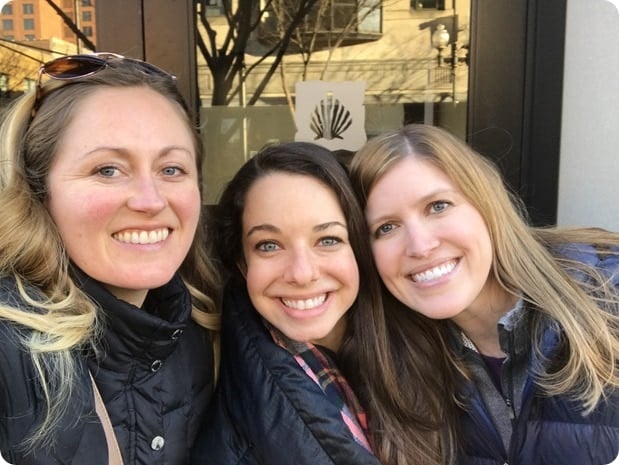 After everyone met back up and cleaned up, the adults left the boys with their grandparents and went out for dinner! We hit a cool hipster Mexican place called The Porch. I ordered a Moscow Mule but I’m pretty sure they gave me a margarita because it didn’t taste like a mule, lol. Oh well! 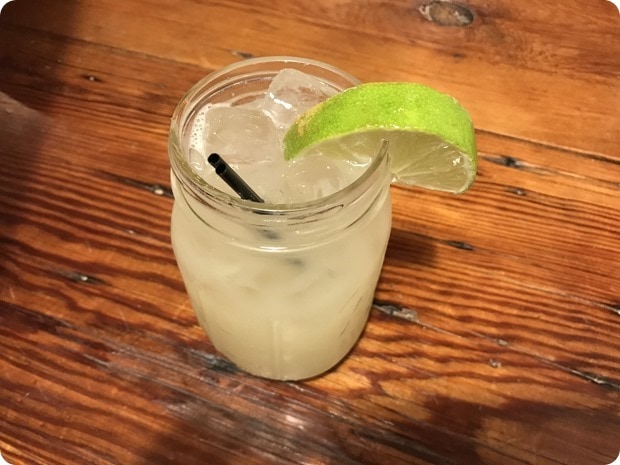 For dinner I had the burrito bowl with chicken, sauteed veggies, rice, and beans. It came topped with some delicious queso, guac, and sour cream with chips, so I ate it like nachos. 🙂 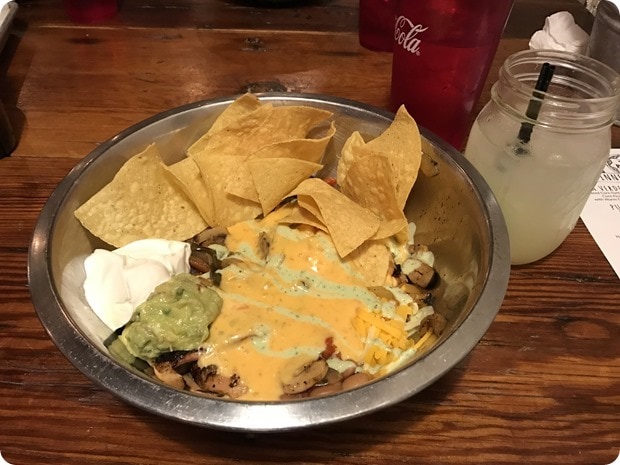 After dinner we hit up a brewery downtown for a nightcap. Fun night!

Sunday morning we all slept in and then met up for breakfast at Mary’s Gourmet downtown. I had an omelette with veggies and avocado and a side of sauteed spinach (really good when stuffed inside the omelette), plus a side of fruit and a biscuit, because I miss biscuits from NC! It was ENORMOUS though – a few bites (with their homemade apple butter – YUM!) was plenty. 🙂 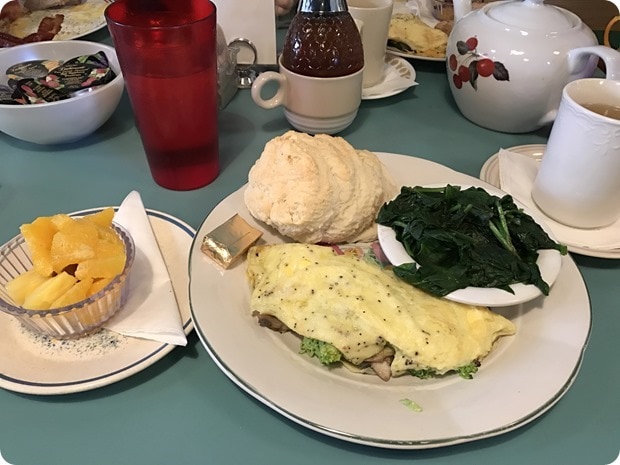 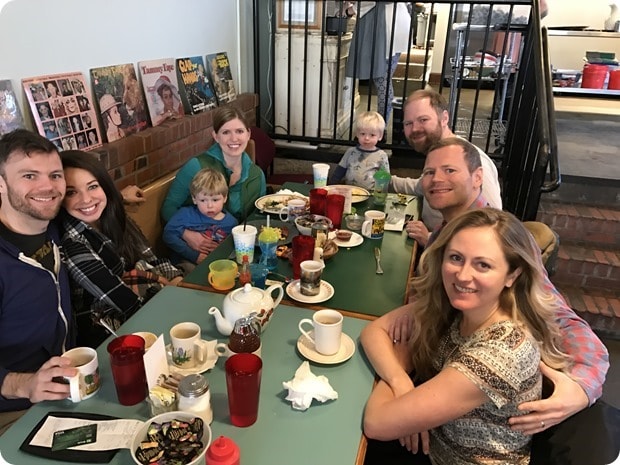 After eating we drove over to nearby Salem Lake for a stroll! Aren’t the guys cute with their matching walking sticks? 🙂 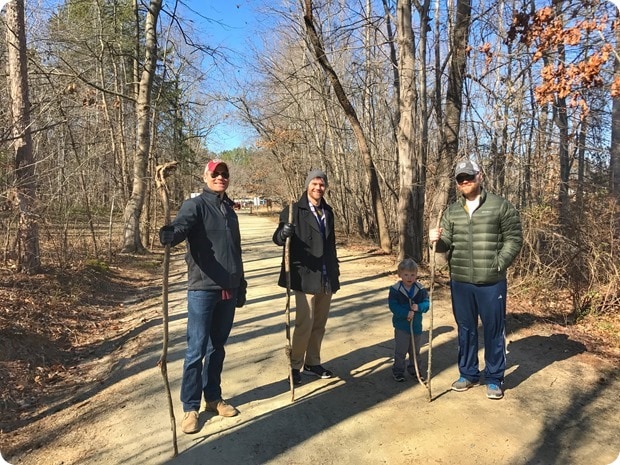 It was soooo nice out – super sunny and not too cold. Felt great to get some fresh air and movement in! 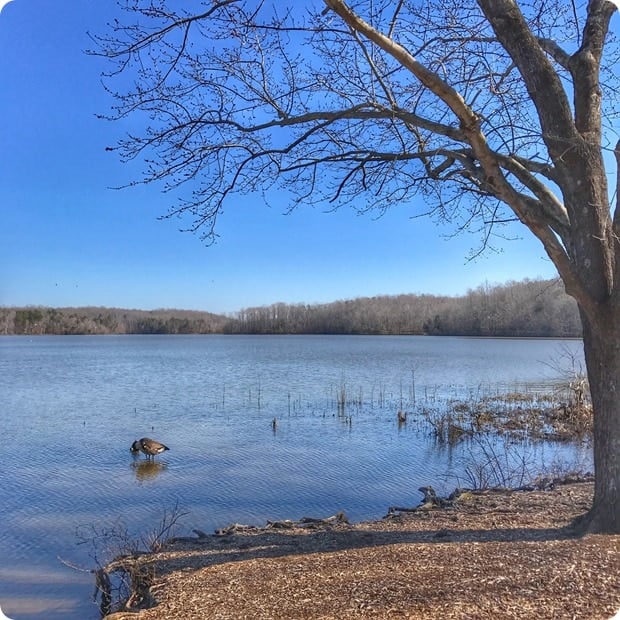 After walking around for about an hour on the trails, Matt and I sadly said our farewells and got on the road!

We made plans to stop a couple times on the way back to see friends, which was nice because it broke up the driving. Our first stop was in Greensboro, which is only about 30 minutes from Winston-Salem (and on our way back towards DC). Our good friends Tim and Lindsey who were in Chapel Hill when we were live there now – so glad we got the chance to see them! 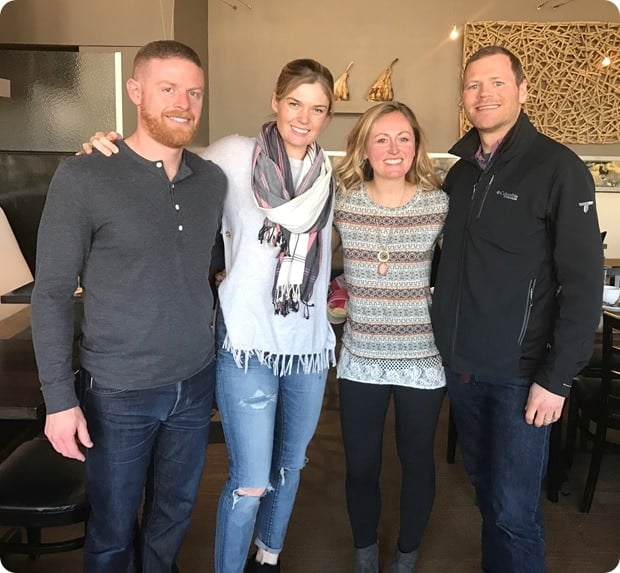 Tim and Lindsey had a sitter for the day (they were headed to a super bowl party after seeing us) so we had them all to ourselves, which was a nice treat!

We met them at a spot called 1618 Seafood Grille for a late brunch around 1. Lindsey was enjoying a mimosa when we arrived and it sounded delicious so I got on board that train too! 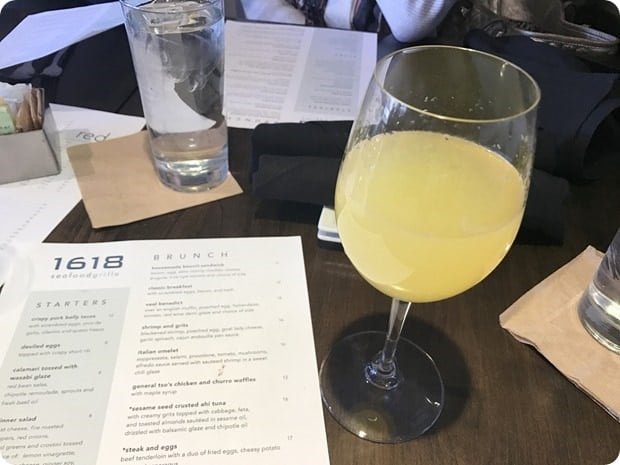 We all shared some deviled eggs to start, which were topped with crispy short rib. YOU GUYS – these were seriously one of the most amazing things I’ve ever eaten. 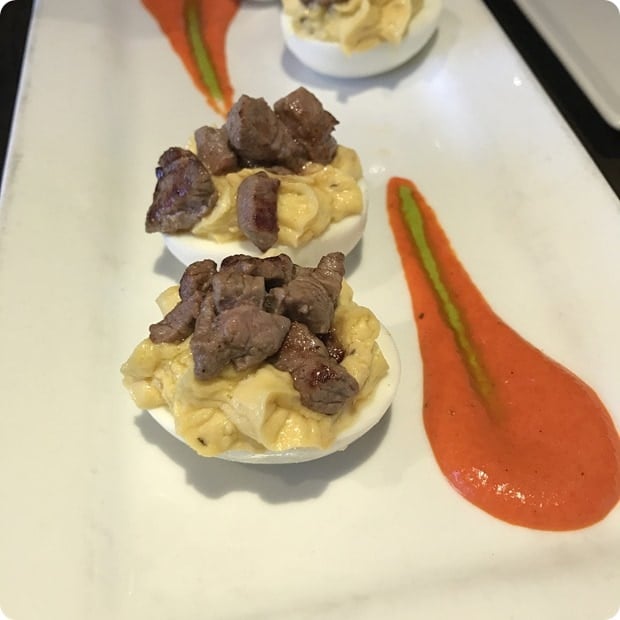 Seriously though – they were so good we all immediately decided we needed to order another round. 😉 Take 2! 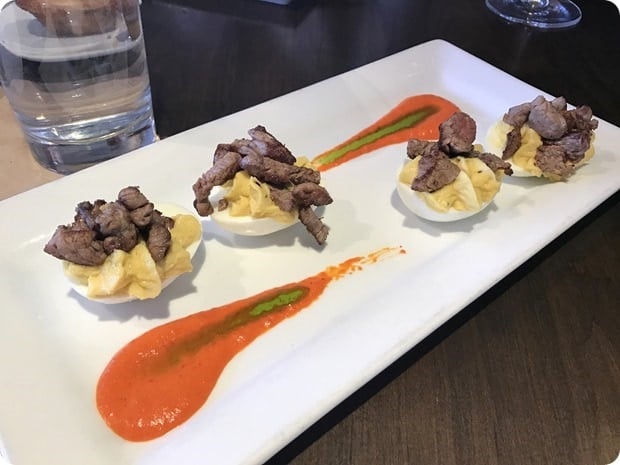 As for my entrée, even though I’d already had (a billion) eggs AND a biscuit earlier in the day, I couldn’t resist ordering the biscuit egg, cheddar, and bacon sandwich. Biscuit eggs sandwiches = my true love, and NC does them RIGHT. This was soooo good – and not too massive, either. Plus a yummy side salad that Matt helped me eat! 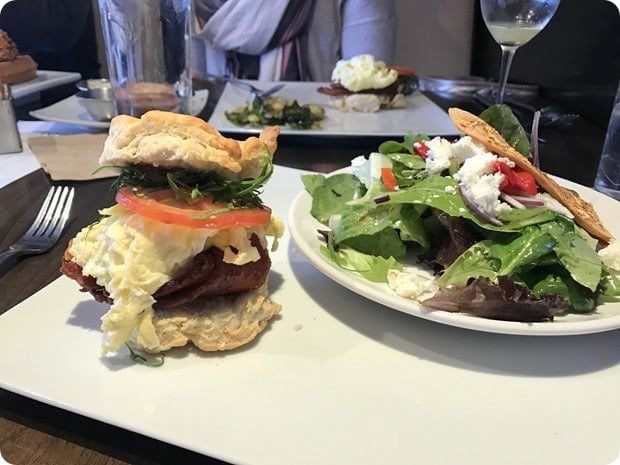 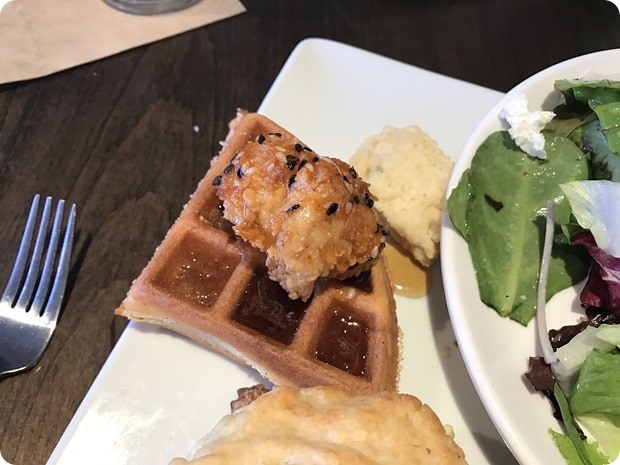 Such a delicious meal and so good to catch up with our friends, too! Thank you again for treating us Tim and Lindsey!

Matt and I got back on the road for about an hour before arriving in Durham for our last stop on our progressive drive home – a walking date on the Tobacco Trail with our friends Sarah and Matt! Sarah is one of my best friends from college and Matt is one of my Matt’s best friends from home/high school, so we were both really glad we were able to squeeze in a quick visit with them while in the area. (I wish we’d had more time – and I wish I’d had a chance to see my grad school buddies who are in the Chapel Hill/Raleigh area, too – I’ll have to plan a trip back soon!)

We walked with them for about an hour on the trail which was lovely – it was in the mid 50’s by this point and still super sunny. What a treat! Loved meeting their new baby boy, William, too, and seeing their adorable 5 year old son Holden!

Long time readers will remember this trail well – I used to do a ton of long runs on it with the girls and Matt while we were in Chapel Hill for grad school, and I even did the Tobacco Road Half Marathon back in 2012, which is on the trail! Ah, memories. 🙂

Matt and I got back on the road just before 5 and were home by 8:30 for Super Bowl watching for him and unpacking/getting ready for the week for me. 🙂 Such a fun weekend! Also, if you’re looking for a book recommendation, we are listening to “Born a Crime: Stories from a South African Childhood” by Trevor Noah right now on audible, and it’s really good. Highly recommend! Made the drive go by much more quickly. 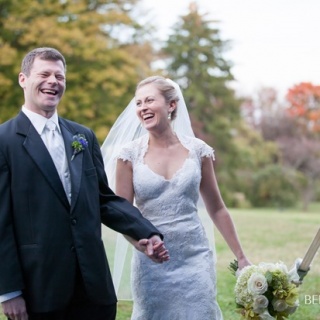 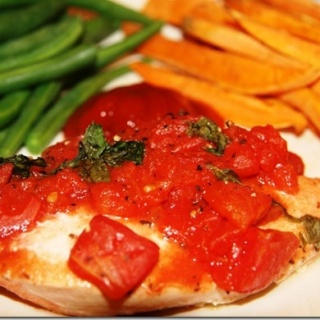 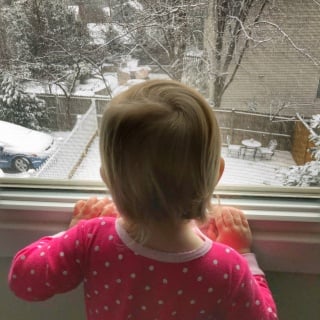 Where are you spring? + Eats 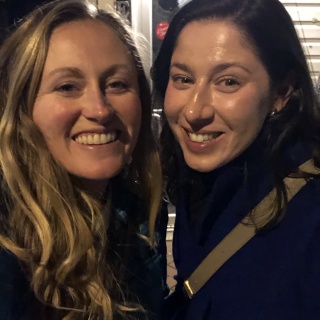