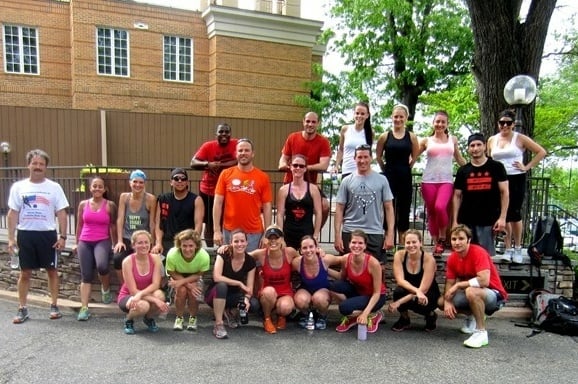 Matt and I kept things nice and low key on Friday night; we took a post-work walk to enjoy the beautiful evening and then parked ourselves on the couch the rest of the night. On Saturday morning, I was up bright and early for another OutRun adventure with Roam Fitness! 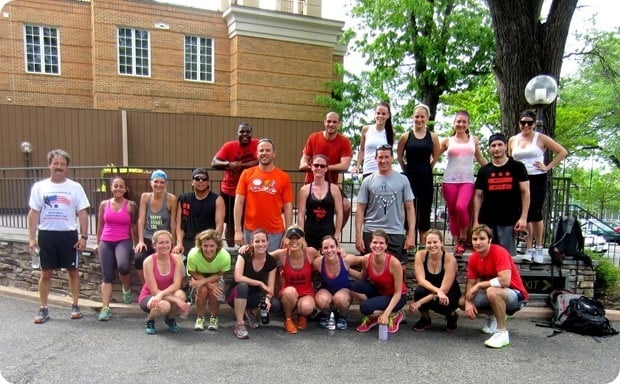 As I’ve mentioned, Roam Fitness is offering free weekend OutRuns (a sort of run club + boot camp urban adventure) all summer. 9 a.m. every Saturday, you just have to sign up on their website!

This week, my girls Kathleen and Lauren were on board for the adventure. I can’t say enough good things about OutRun – the group is so fun and welcoming, Iwonka (the instructor) is high energy in a good way, and it’s a killer, creative workout, too, while still being fun. 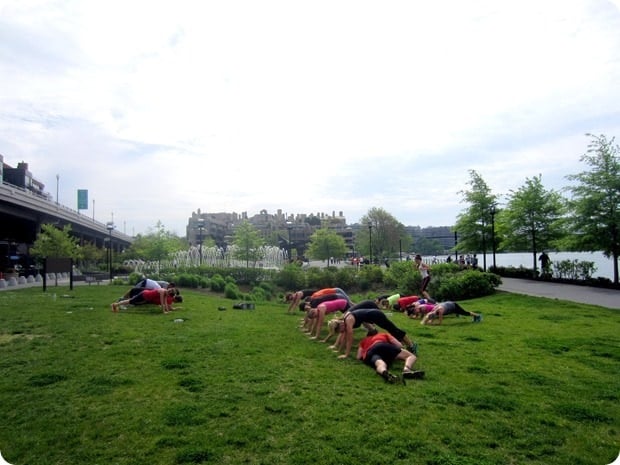 This week’s adventure started at the Roam Fitness gym in Glover Park (in the Savoy Suites hotel basement). From there, we ran down towards the Georgetown waterfront, with boot camp stops along the way! They were really creative this week with lots of partner workouts with was fun, and everyone was encouraged to mix up their partners each time. I especially loved the partner workout where one partner got in a plank and the other hopped over their legs while holding on to their lower back. It was such a good core workout, and hard for the jumper, too! Also, Kathleen is the cutest jumper ever in this photo below. 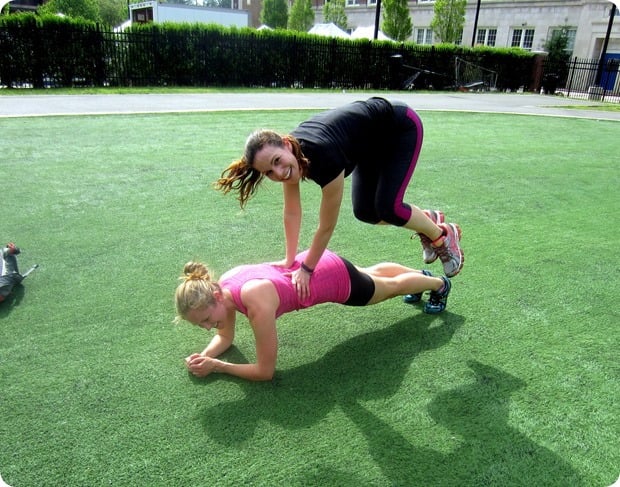 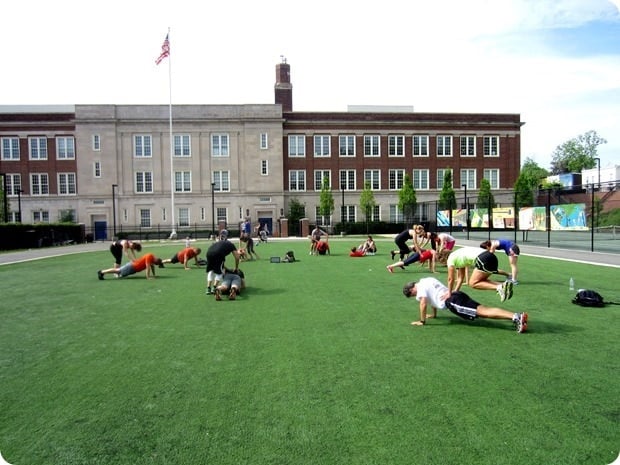 During the runs, I had fun chatting with the girls and with some of the others in attendance, too. 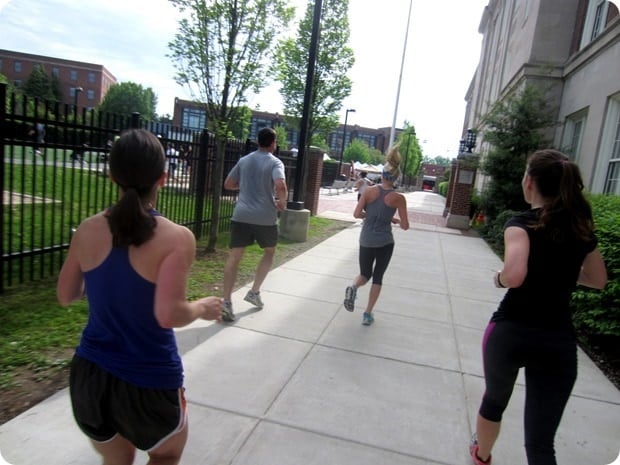 The main event: Planks on the Potomac! 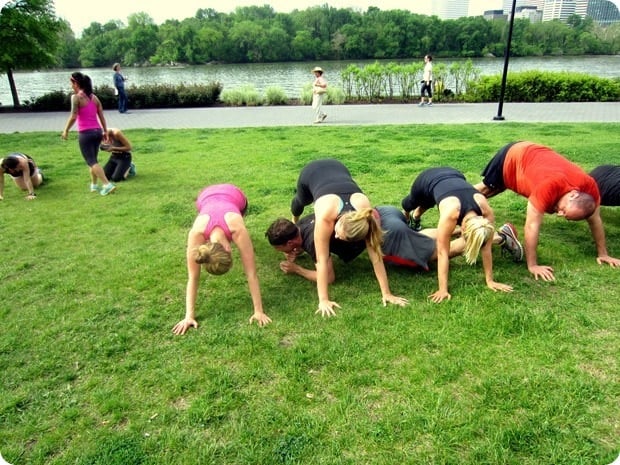 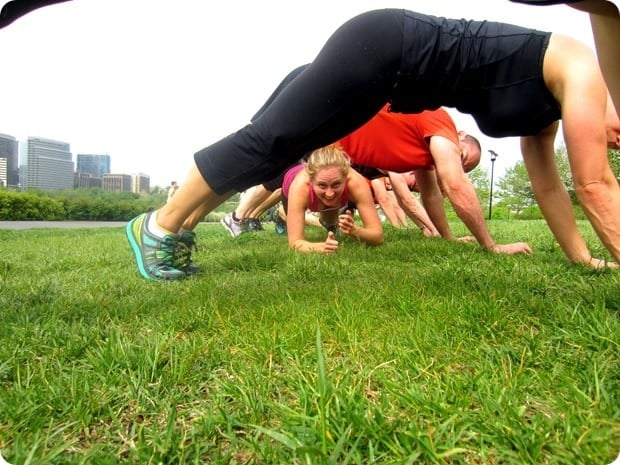 A trip to Georgetown with a workout group wouldn’t be complete without the Exorcist Stairs, of course. (Also, I love that the stairs have their own Yelp page.) 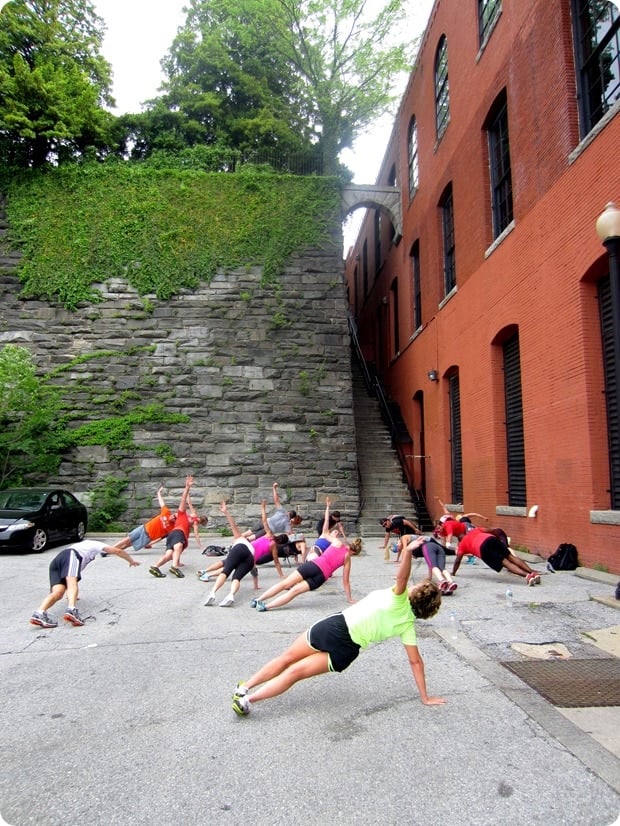 After the Exorcist Stairs we began our climb back up to Glover Park, with various stops along the way. 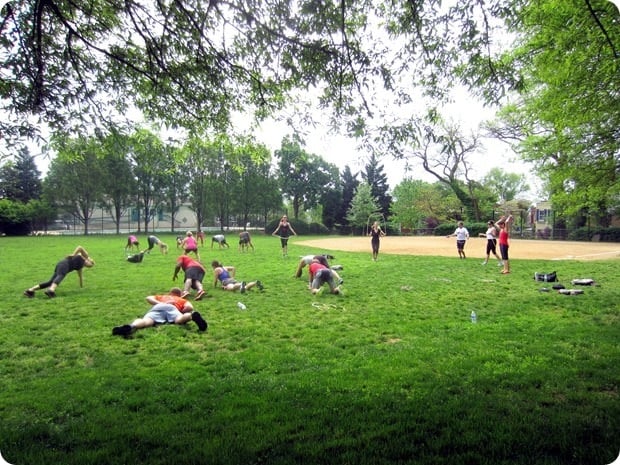 The past couple times I’ve written about the OutRun weekend workouts I’ve gotten some questions about pace and fitness level, so I wanted to address those. The weekend OutRuns are definitely not a workout I’d recommend to a beginner, simply because they are 90 minutes of nonstop exercise. You can certainly modify any of the activities to make them easier, and there are definitely people of varying fitness levels in attendance, but it’s still a pretty long workout. 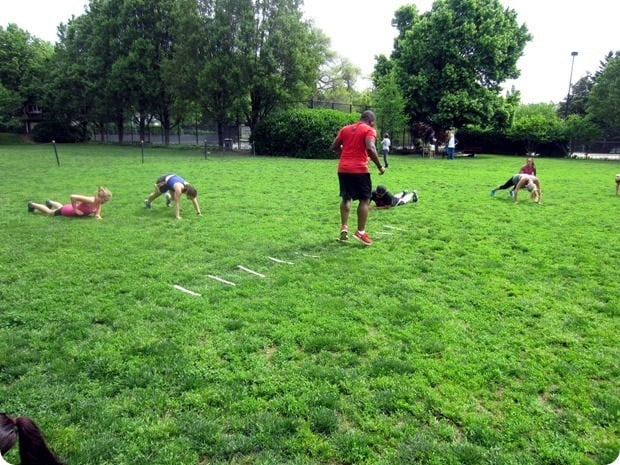 In terms of the running, the group usually covers between 3 and 5 miles in the 90 minutes depending how many stops there are. I wouldn’t be too worried about being a fast runner because you stop so much that it’s easy to catch up. That said, I’d probably recommend being able to comfortably do about a 10 minute mile, and being able to run for 30 minutes without stopping (even though we don’t run for more than about 10 minutes at a time before stopping, I still think it would be good to have that base fitness level). Anyway, I hope that helps. Hope to see some of you out there in the future! 🙂 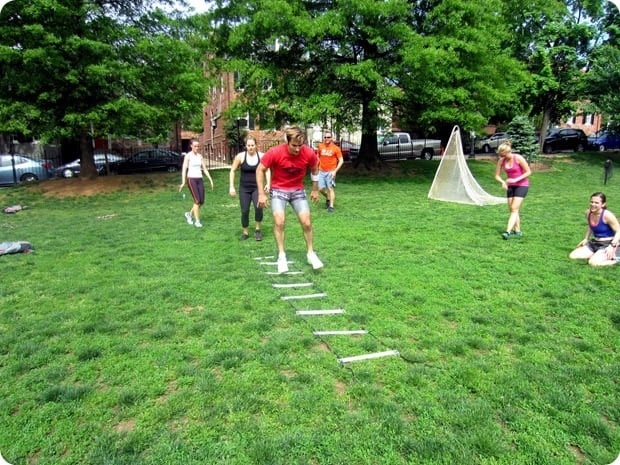 By the way – if you’re looking for a taste of OutRun but less intensity, or a way to get started and work up to the weekend OutRuns, the during the week OutRuns are shorter (1 hour) and much more hands-on, too, though not free. The groups are also a lot smaller, so it’s better if you’re worried about the running pace or need help with modifications. 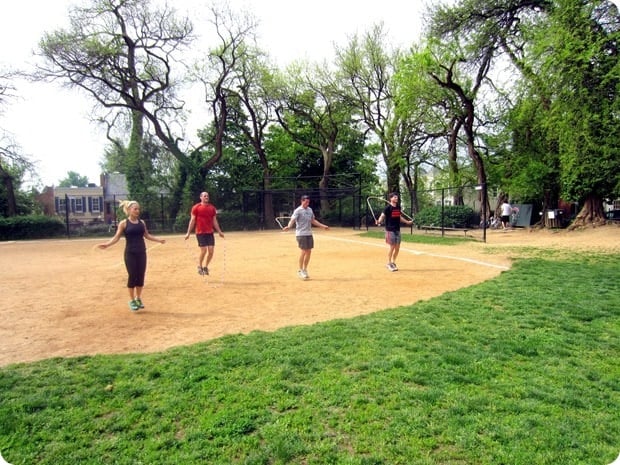 Anyway! Such a fun and invigorating way to start the day. Here I am with Kathleen and Lauren post-workout. We were sweaty, covered in grass and dirt, and totally endorphin high. We’ve decided we’ll be at OutRun every Saturday that we’re in town this summer. 🙂 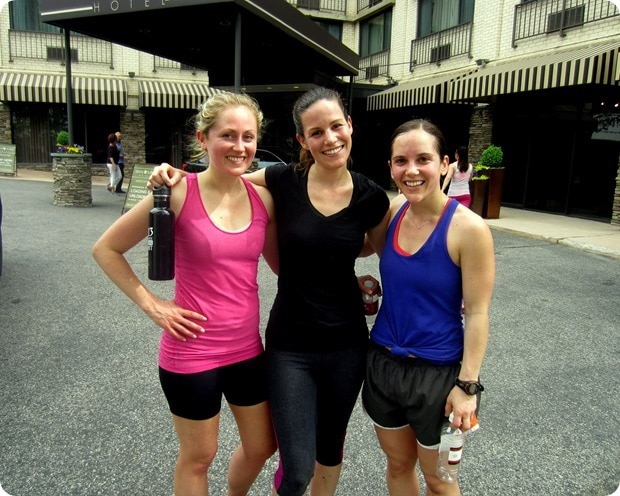 Also, a big thank you to Brooks for sending me the cute outfit I’m wearing as part of my Run Happy Ambassadorship. I’ve never owned running spandex shorts before and I LOVED these – you’ll be seeing them a lot more this summer! Really comfortable and they didn’t ride up during the running, either. I also liked the extra butt coverage during planks and such. 🙂 I was a huge fan of the tank, too – really comfortable, nice and long, seamless, great wicking material, and I loved the really fine mesh and pattern on the back. I got some compliments on it during the workout! 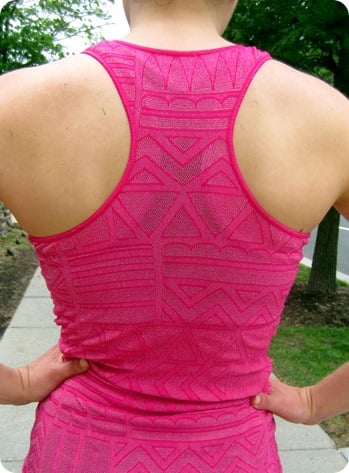 After the adventure, Kathleen had to head out but Lauren and I decided to get some food and catch up. We were STARVED so we made it a progressive brunch! First stop: Whole Foods for some green juice to replenish our electrolyte stores and rehydrate. I pounded this whole thing in about 10 minutes. SO GOOD. 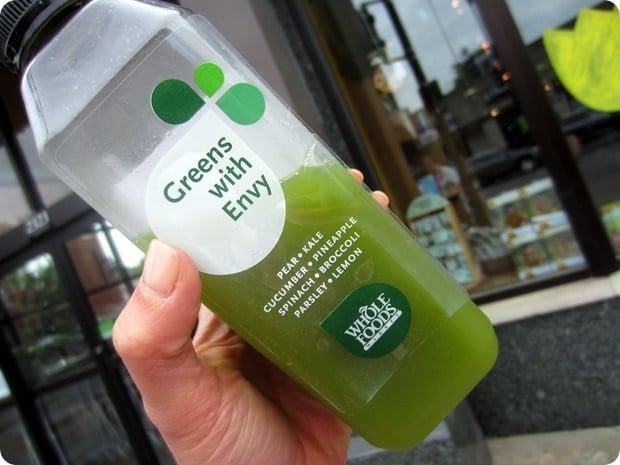 Next up: some quick and easy food! We were too gross from the workout for a fancy brunch so we hit up Einstein Bros for bagel sandwiches. I had an egg and cheese on honey whole wheat and added some lox (smoked salmon) to the mix, too. Hit the spot! 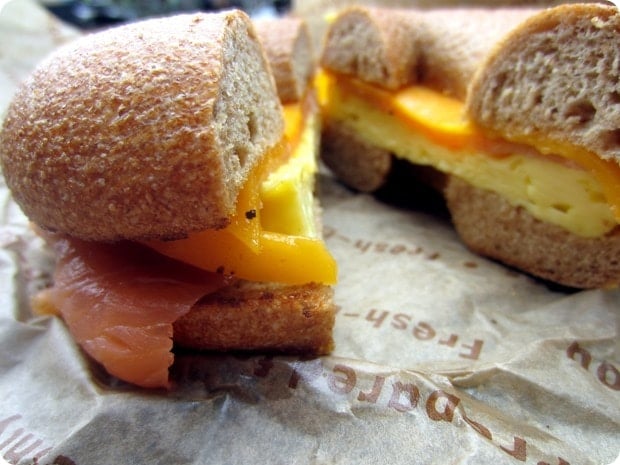 And since we needed coffee, we headed across the street to grab lattes from Starbucks and ate out on their patio while chatting away.

Such a fun morning! The rest of the day was filled with party hopping – Matt and I went to a friend’s place in the afternoon who was hosting a birthday party for their 1 year old, and then we headed to Heather’s place for a party to celebrate her engagement (SO excited for them!!). 🙂

On Sunday morning, I met my friend Karen for a yoga class! We hit up the 9 a.m. Yoga 1 class at Edge Yoga, my local fave. Don’t let the fact that this studio (which is really just a no frills room) is in the same building as a pizza place and a bartending school scare you off. 😉 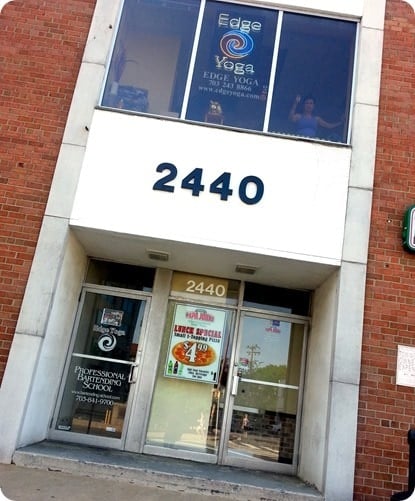 I loved the class – normally I go to Mark’s classes but I’ve been enjoying Rebecca’s lately, too, to mix it up. And even though it’s called Yoga 1 it’s still an awesome workout!

After getting our zen on, Karen and I grabbed coffee from my favorite local coffee shop – Java Shack – and spent the next hour strolling around, enjoying the weather, and chatting away. 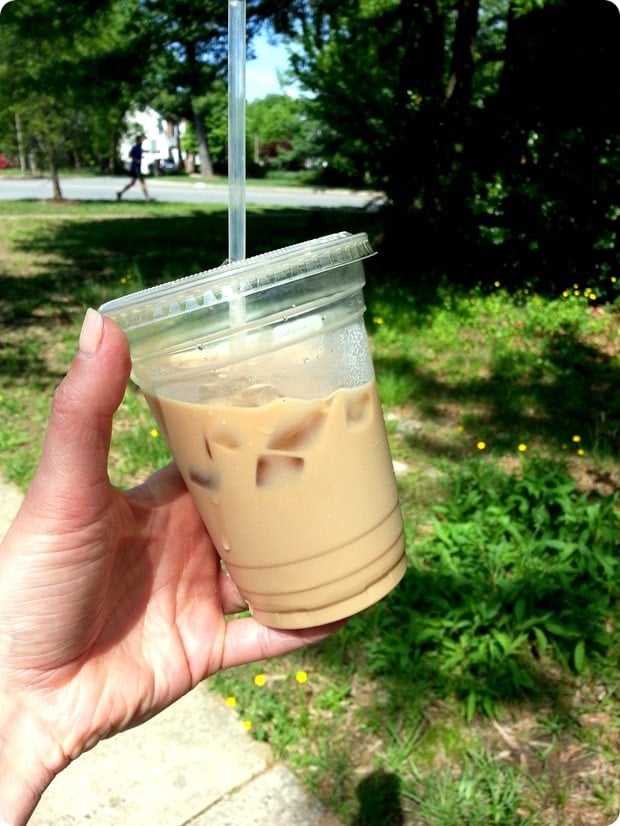 I really love hanging out with Karen – we always have such good chats. It was great to catch up with her. 🙂

As for the rest of yesterday, Matt and I went to Mother’s Day brunch with my family which was lovely, and then it was so nice in the afternoon we decided to head out for a little bike ride. Too beautiful out to pass up! We took the Mt. Vernon Trail along the Potomac River on the VA side and stopped for awhile to take in the views down at the Washington Sailing Marina. Felt like summer. <3 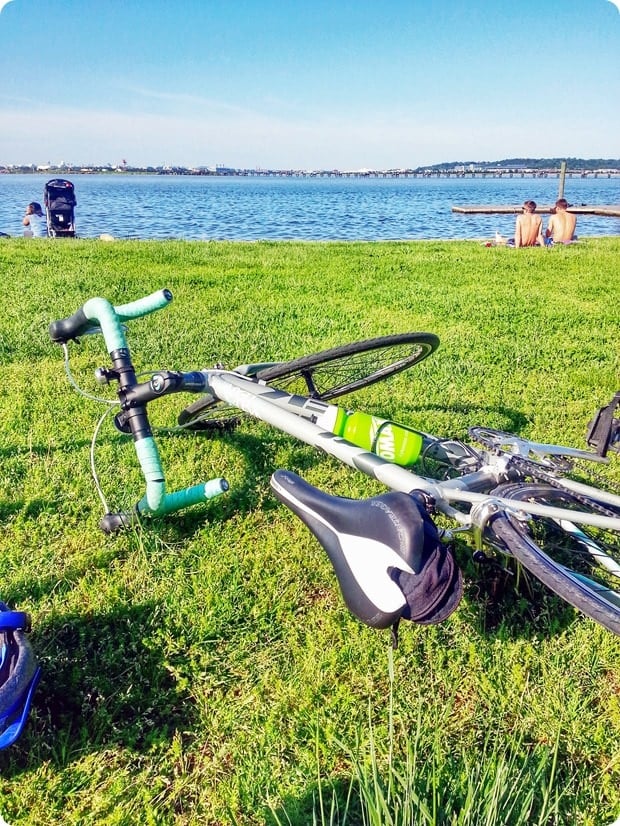 And that was that! Last night was dedicated to TV, specifically Game of Thrones. Obsessed. 🙂

And now, to catch up on emails and client work! I was planning to get in a swim workout this morning but I was totally exhausted from my ridiculously active weekend so I slept in instead. Always good to listen to your body, my friends!

Have a fabulous day!

What fitness adventures did you get into over the weekend? 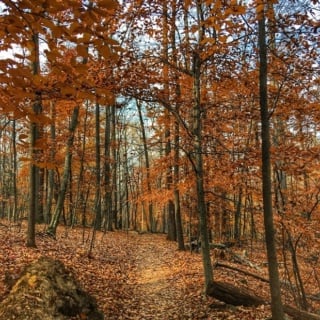 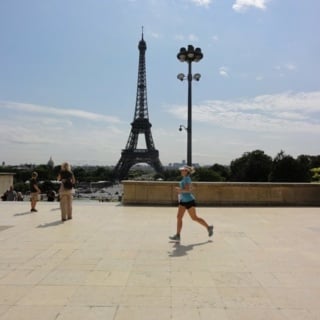 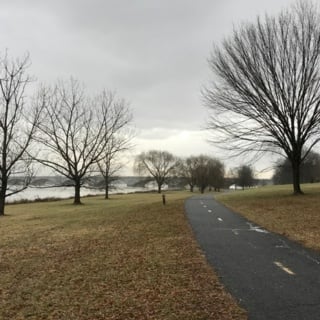 Back on the Run + Recent Eats 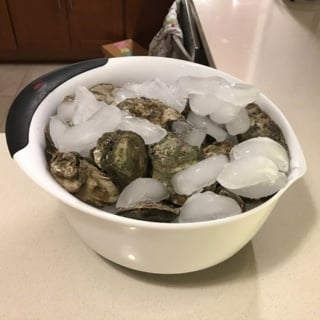