Well, my friends – it was quite the weekend! As you know, starting on Friday afternoon in the DC area, it snowed. And by snowed, I mean it snowed A LOT. Like, 2 feet when all was said and done by Sunday. 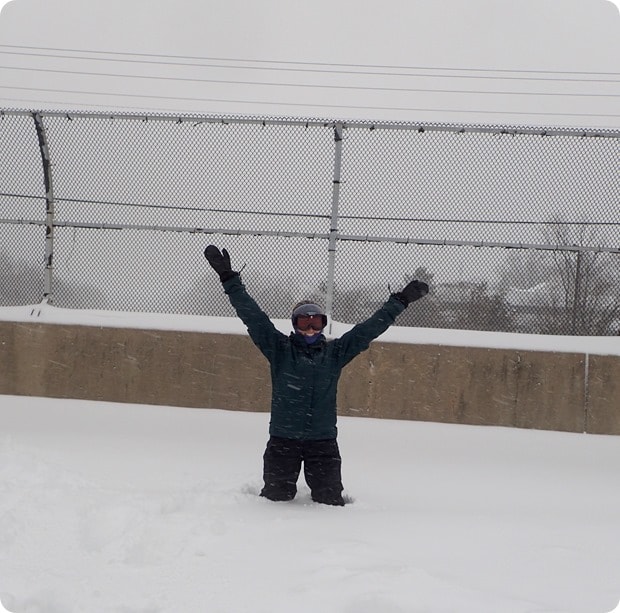 On Saturday, Matt and I took full advantage and enjoyed walking around and playing in the snow.

As you can tell in the photo below, I lost the wrestling match. 😉 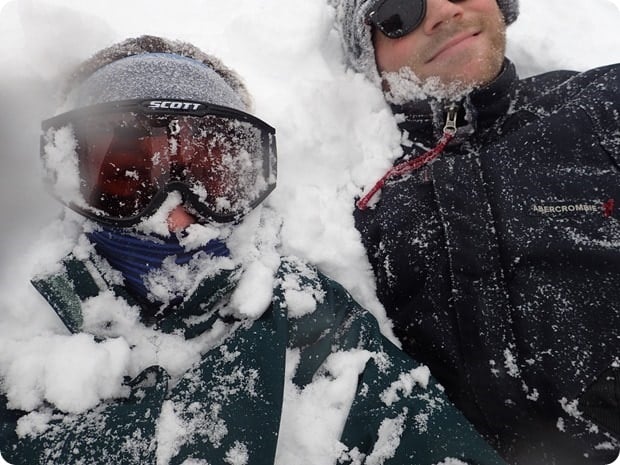 It was crazy to walk around – so. much. snow! Everyone was out wandering around on foot – lots of people sledding, cross country skiing, and snowshoeing. I felt like we were in Canada, not the DC area! 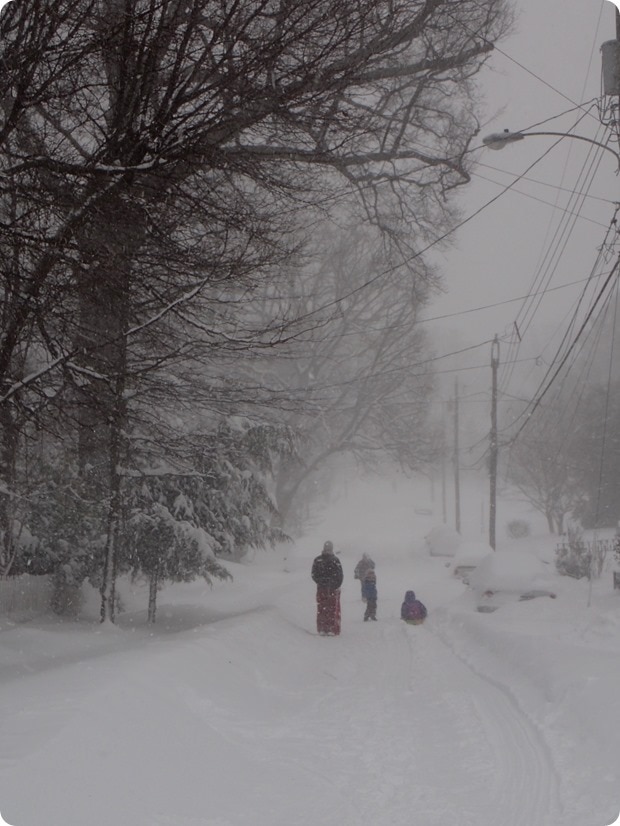 Then this also happened. Because happy hour while sitting in a pillow of snow (so comfortable – my favorite thing was to fall back into it like a trust fall) is cooler than normal happy hour. And your drink always stays cold. 😉

We also spent some time attempting to shovel (which is quite the workout – oof!). We figured even if tons more snow fell at least we’d have gotten a head start. 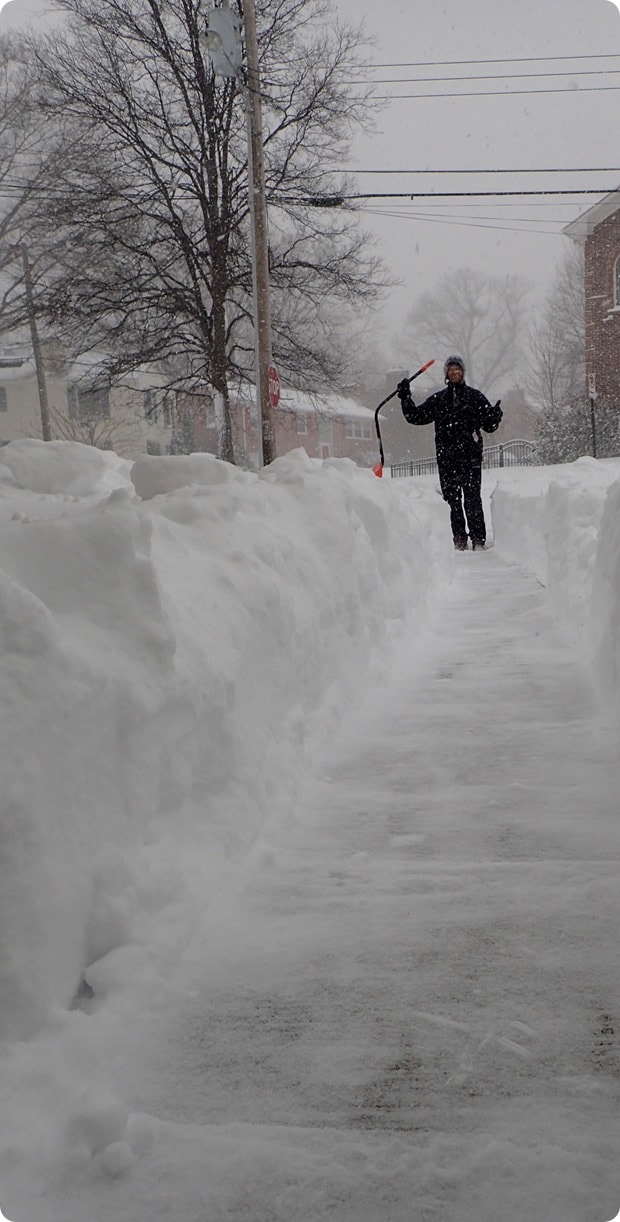 Oh, and then we went to a wedding. 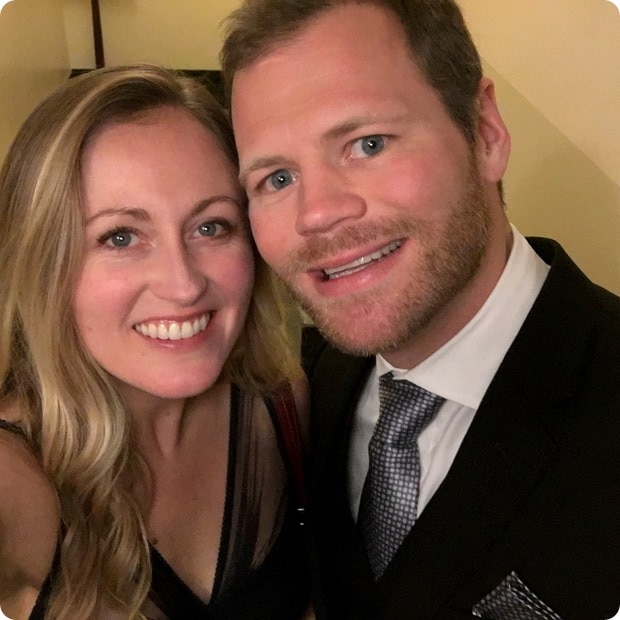 No, seriously! On Saturday, our friend Gretchen, who is my high school best friend Jenny’s younger sister, got married. All day we debated what to do. The wedding was down in Alexandria, VA, which is normally about a 20 minute drive for us. Could we possibly make it down there? Walking around, we saw that the main roads were being plowed well, and we really didn’t want to miss out – I have known Gretchen since she was like 9 years old – but we weren’t sure if there was any way to get down there. We tried to dig out our car – nope, not happening. We had almost given up when we heard from my high school friend Lara that they were definitely going, from Vienna, which is even farther. She said the roads weren’t great but that driving slow was working fine.

Okay, let’s do this! We ended up wearing snow clothes, packing our wedding outfits and some “just in case” overnight items in a bag, then walking to the closest main road to us that was plowed and snagging an Uber SUV from there. The guy who picked us up was in a huge Suburban and visibility wasn’t great, but in terms of actually driving the car had no problems. No slipping around at all and we took it nice and slow and stuck to mostly main roads. About 45 minutes later (and one VERY expensive ride, for good reason) we had made it!! Their wedding was at the beautiful George Washington Masonic Memorial building in Old Town, and thanks to their staff plowing the driveway all day we were able to drive right up to the entrance. Whew! 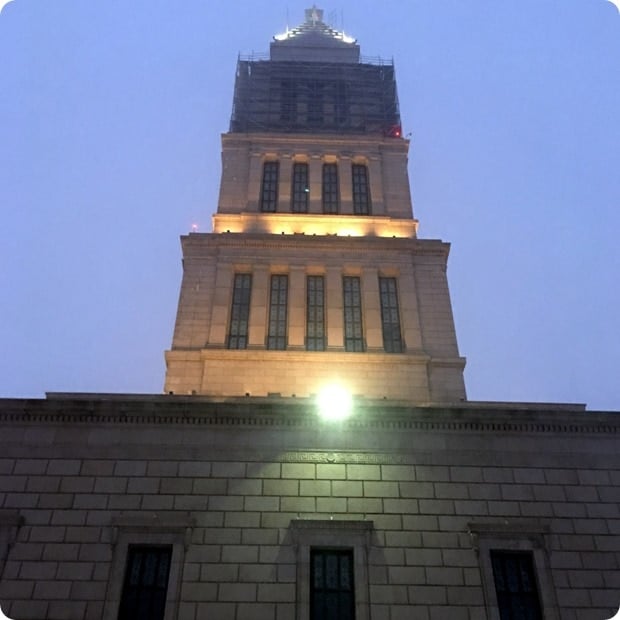 I seriously couldn’t believe we’d made it. Hooray! About half the guests weren’t able to show so I knew it would mean even more that we had. The wedding was black tie, so I threw on my navy blue floral gown once we arrived. Fun to get to wear this again!

As for the wedding, it was lovely and I’m so glad we were able to be there! Everyone did a great job pitching in to help out, and many people went to great lengths to be there. The caterer and the venue both put up staff at nearby hotels to make sure they were able to pull it off, and the photographer made it, too. The DJ, hair, and makeup bailed, so friends and family stepped up to take their place. Only one member of the string quartet made it – and he walked 2 miles to be there. Quite the memorable occasion, to say the least!

All that made it even more special, I think. <3 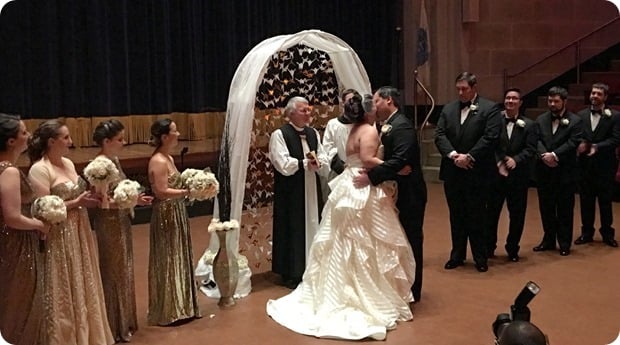 I knew that Gretchen had spent the better part of the last year creating a ton of beautiful DIY items for the wedding, and I loved seeing it all come together in person. Everything looked wonderful! Luckily they did most of the decorations (and the flowers) themselves – made it easier given the snow situation! 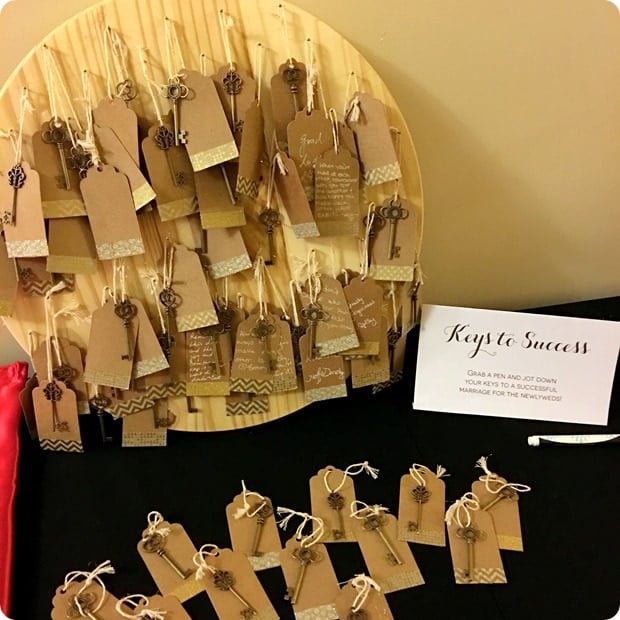 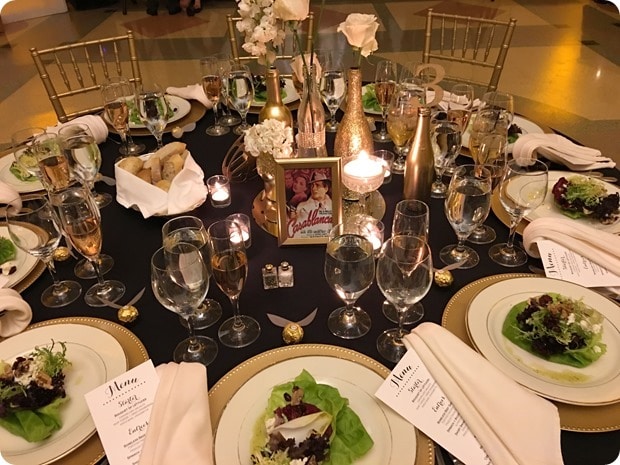 See that pretty canopy with all the paper cranes (white and gold) below with the (awesome) dessert spread? That was also the backdrop to the ceremony, and Gretchen made it herself. Friends and family hand folded every single one of those cranes – amazing! 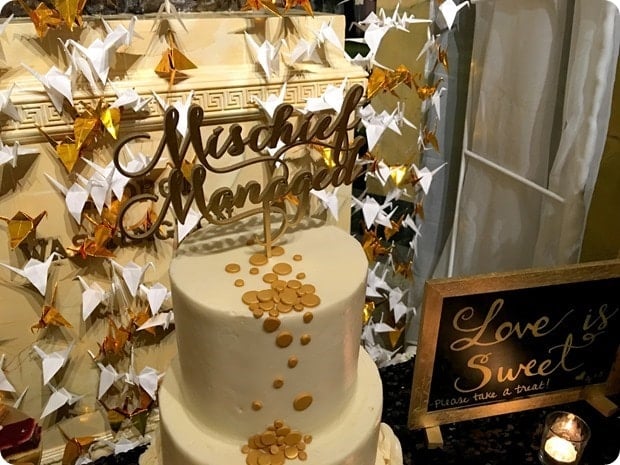 We ended up staying overnight at the wedding hotel nearby with everyone (glad we brought overnight bags just in case!) and hitching a ride home the next morning when the roads were better. Plus that meant we could hang out later with everyone. 🙂 My friend Lara and I were joking that we have now completed the “Triple Crown” or “Trifecta”, if you will, of Powell weddings. We were in Jenny’s wedding back in 2008, attended Ben’s wedding in 2013, and now we were at Gretchen’s! Matt has been at all of them, too. 🙂 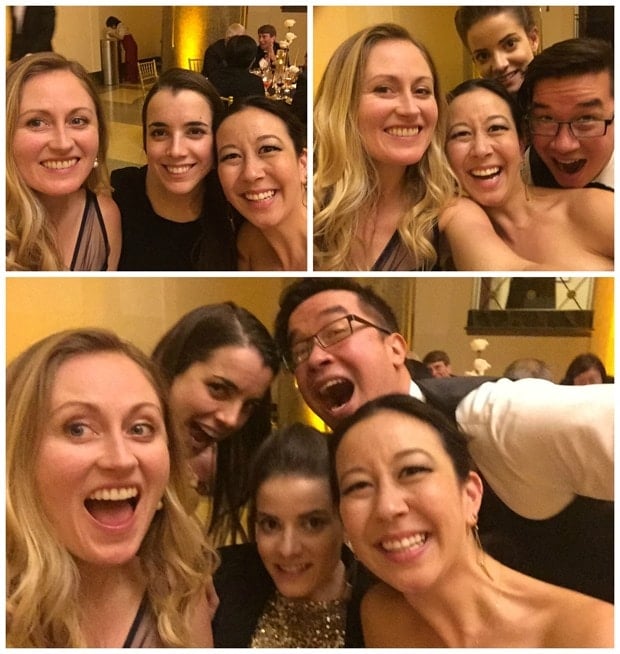 This picture below is my favorite of those I took at the wedding – Gretchen looks so happy. <3 Another huge congratulations to Gretchen and Sean – the new Mr. and Mrs. Fox! 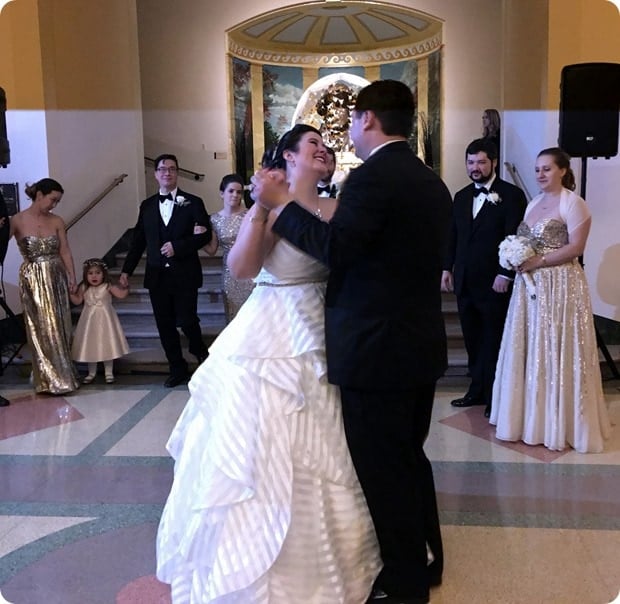 As for yesterday once we made it home, it was spent shoveling! I’m about to head back out now to do a little more. I seem to have caught a cold so I did some resting up yesterday, too, and Matt was sweet and made us a big chicken, rice, and veggie soup last night. Hit the spot. 🙂 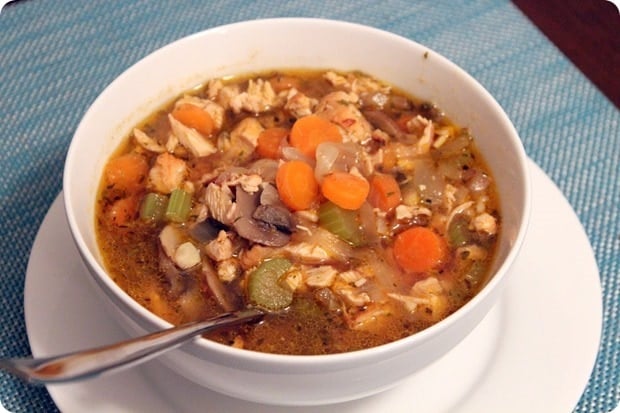 He winged it and didn’t follow a recipe, but it was chicken, carrots, celery, mushrooms, onions, and garlic with chicken broth and then some 90 second brown rice tossed in at the end. Yum! We have a little left I’m looking forward to eating for lunch today!

As for breakfast today, hot oatmeal sounded right – I whipped up a batch of my Microwave Banana Oatmeal with chia seeds and topped it with some almonds and blueberries.

Who else got buried under a ton of snow this weekend? 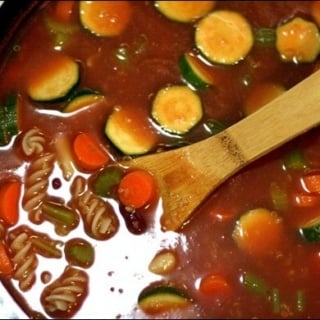 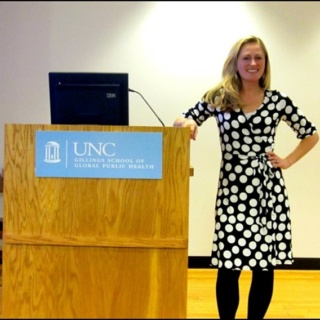 Confessions of a Registered Dietitian 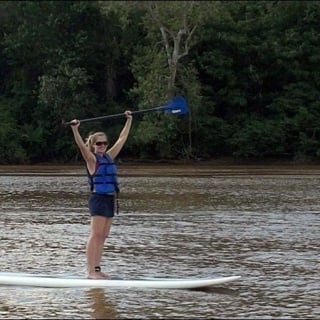 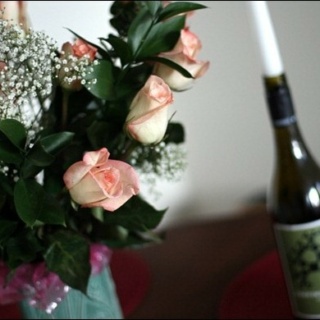