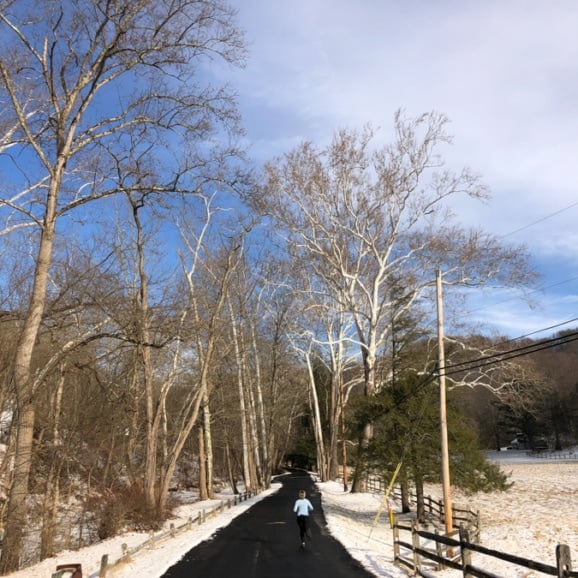 Hello! I’m back with part 2 of my holiday recaps. If you missed part 1, check that one out first – it covers our first few days of the trip, including Christmas day: 2022 Pittsburgh Christmas Recap (Part 1).

For this second post, instead of recapping day by day, I’m going to share some food and fitness highlights from the rest of the our stay.

We had some great meals while in Pittsburgh area with Matt’s family and enjoyed a lot of the leftovers for lunches most days! First, though, let’s talk breakfast.

I didn’t get daily breakfast pictures since it was mostly toast + nut butter and fruit type situations very early in the morning with Wes (I got up early with Wes a lot of the days in exchange for leaving for a workout once Matt was awake – worth it), but here were two noteworthy breakfasts we had at the house. 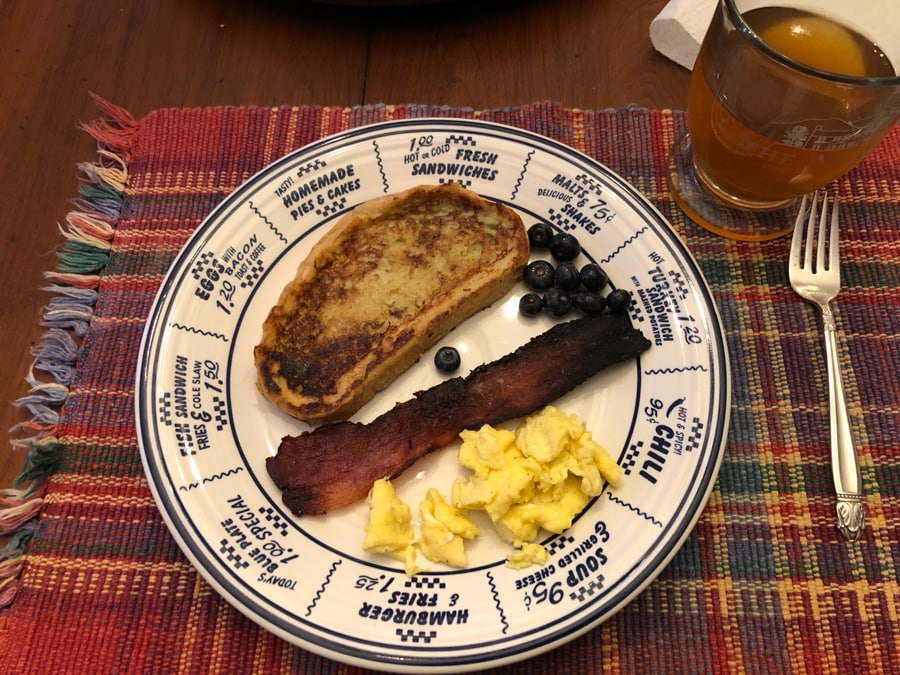 Freezer burritos – my father-in-law said these were a riff on my Freezable Sausage Burritos with Eggs recipe! I need to make more of those, they are so easy and delicious and really helpful to have on hand! 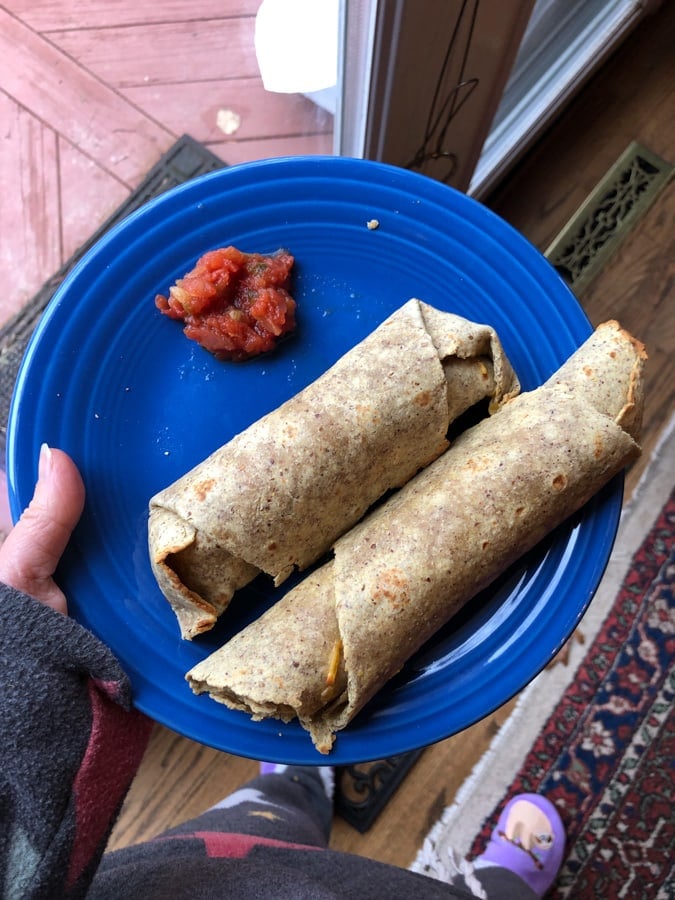 I also had a few yummy breakfasts out in town at my fave spot, Mediterra, after meeting local friends for workout dates. (I also had some really good lattes from Adesso Cafe, my other local fave!)

Mushroom quiche that was delicious and reminded me of my Goat Cheese Mushroom Frittata: 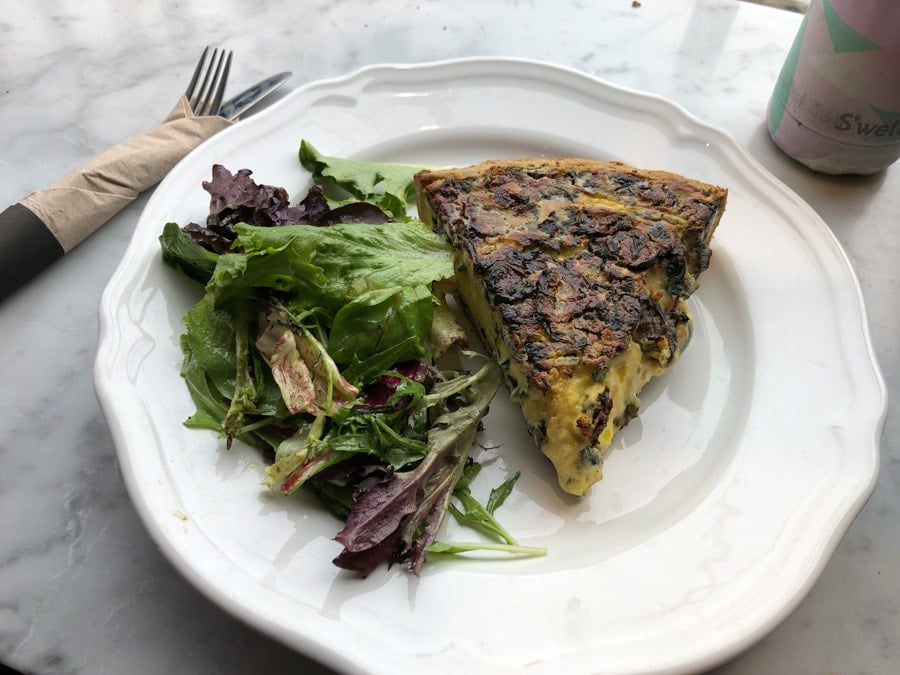 Salmon toast with cucumber and labneh: 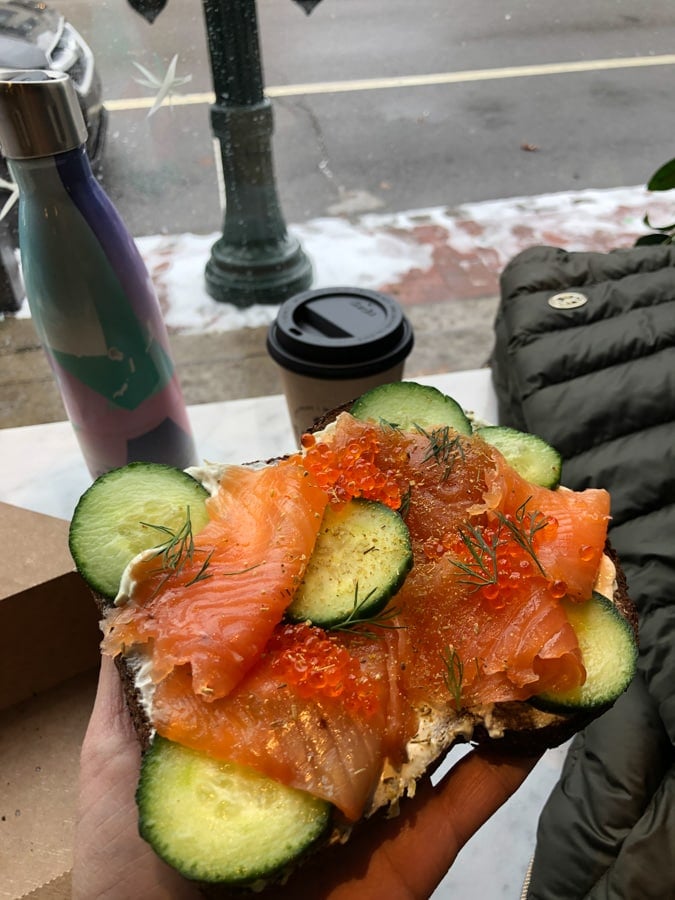 And avocado toast (loved the herb and seed additions to this): 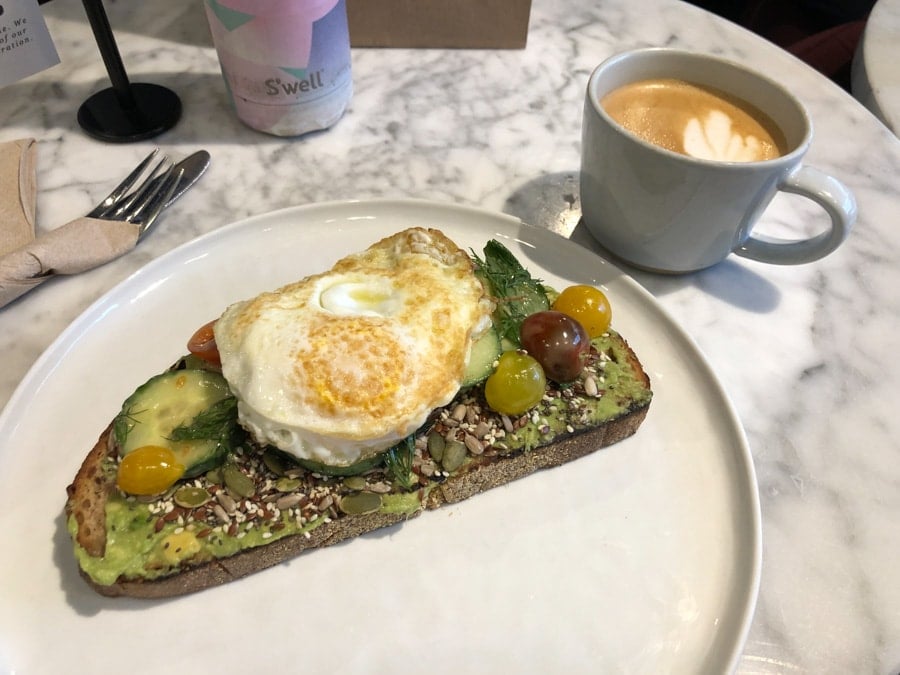 Lunches looked like a lot of leftovers paired with big salads I threw together. Here’s one of those salads with some leftover chicken, plus some soup. 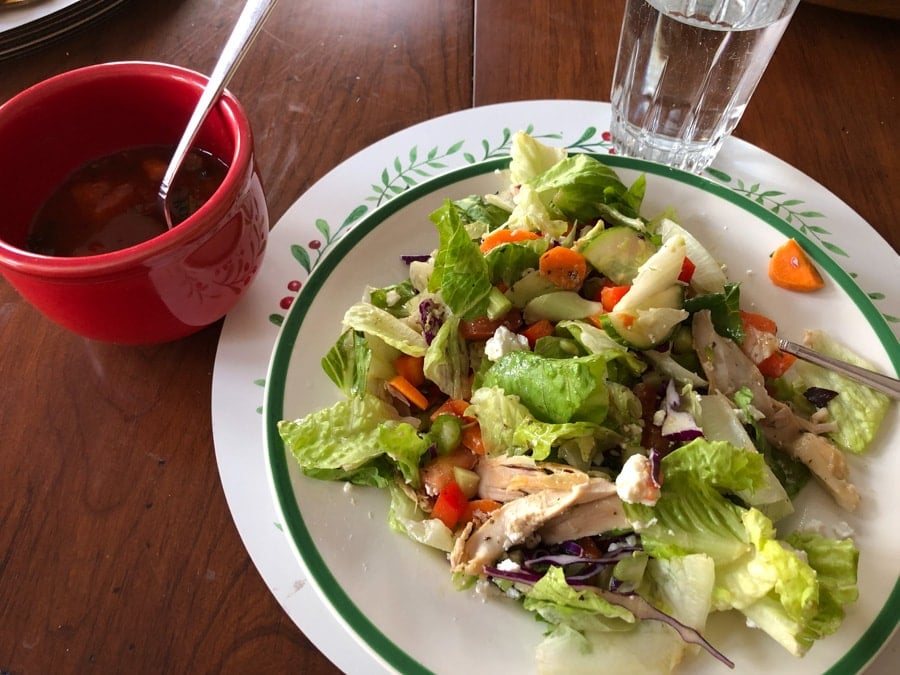 My father-in-law had some chicken broth on hand and made us a really yummy chicken, veggie, and noodle soup that got a lot of love – it was nice to have something lighter for lunches since the dinners were more rich! 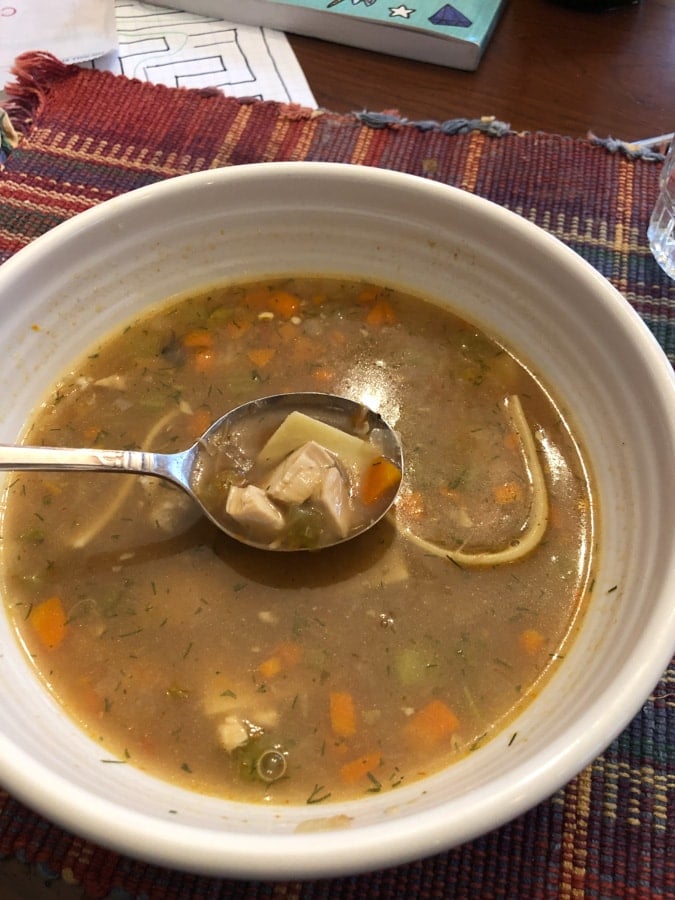 One of my favorite dinners was a big salad with leftover steak from Christmas dinner. It was so good! Plus half a baked potato on the side. 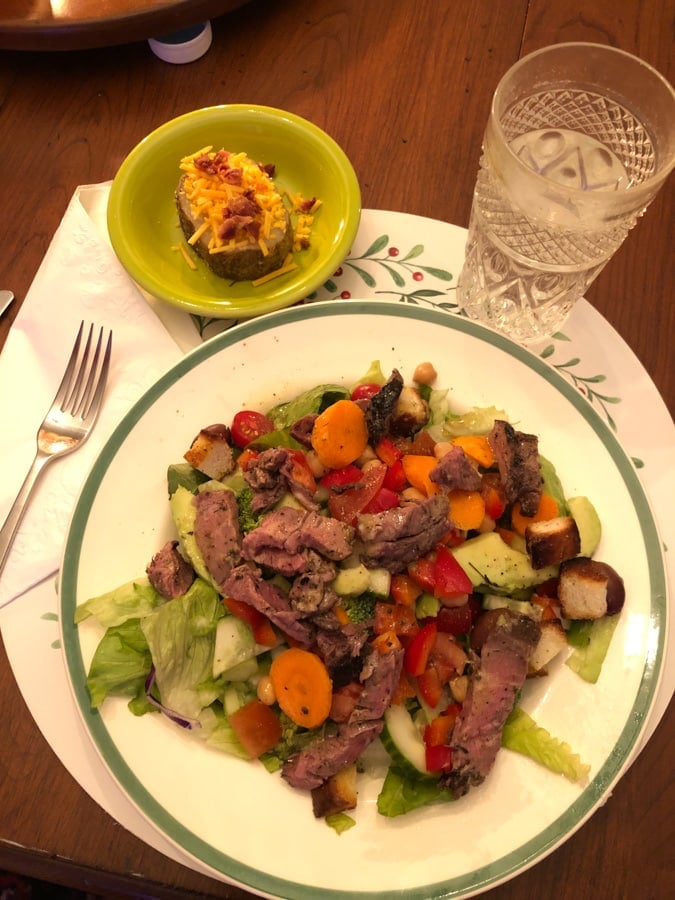 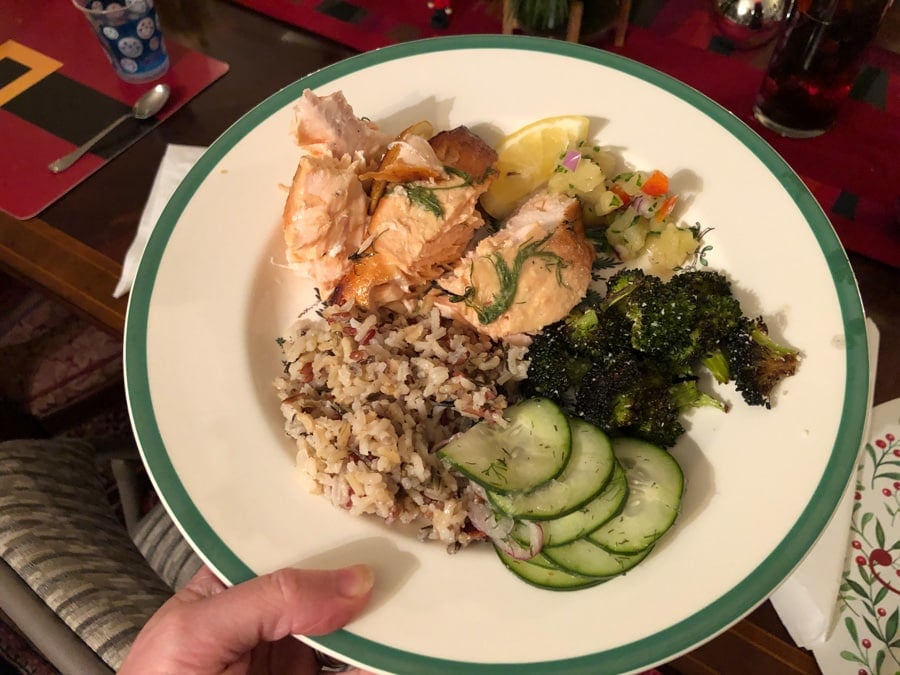 Our new year’s day dinner right before hitting the road to drive back to DC (we always do after dinner night drives, it’s just easier with the kids since they will mostly sleep and there’s not much traffic) was pork, potatoes, collard greens, sauerkraut, black eyed peas, and cornbread!

We also had a fun dinner out while we were in Sewickley – Matt and I and his two brothers and their wives made it out for a night out without the kids (thank you to the grandparents for babysitting so we could go out!).

We went to a spot in town called Mambo’s Italian Kitchen. I started with the beet salad: 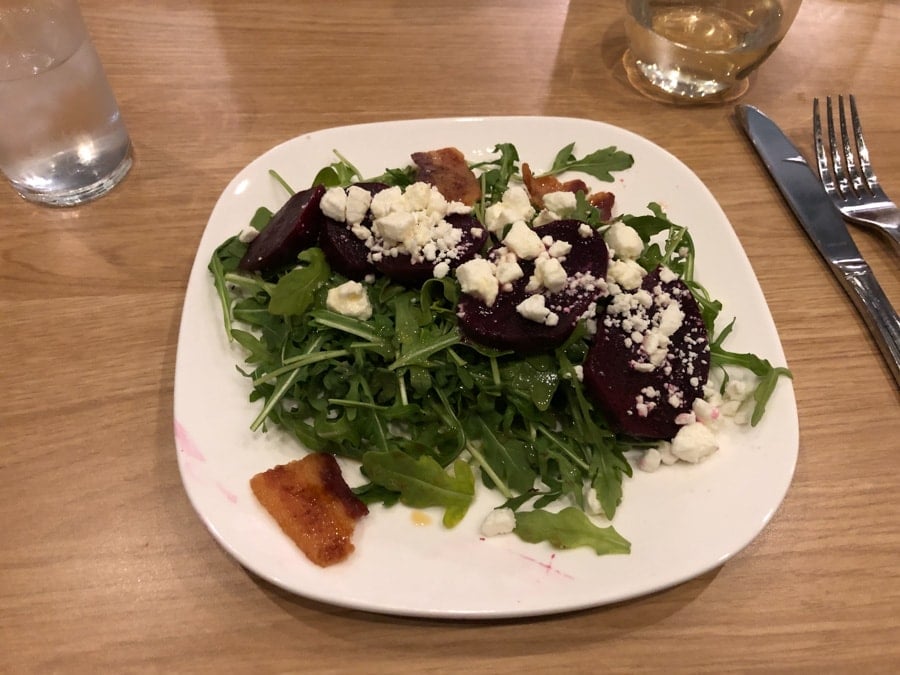 And then the other ladies and I shared a pizza and the lemon chicken. The salad was just okay but the entrees were very yummy! 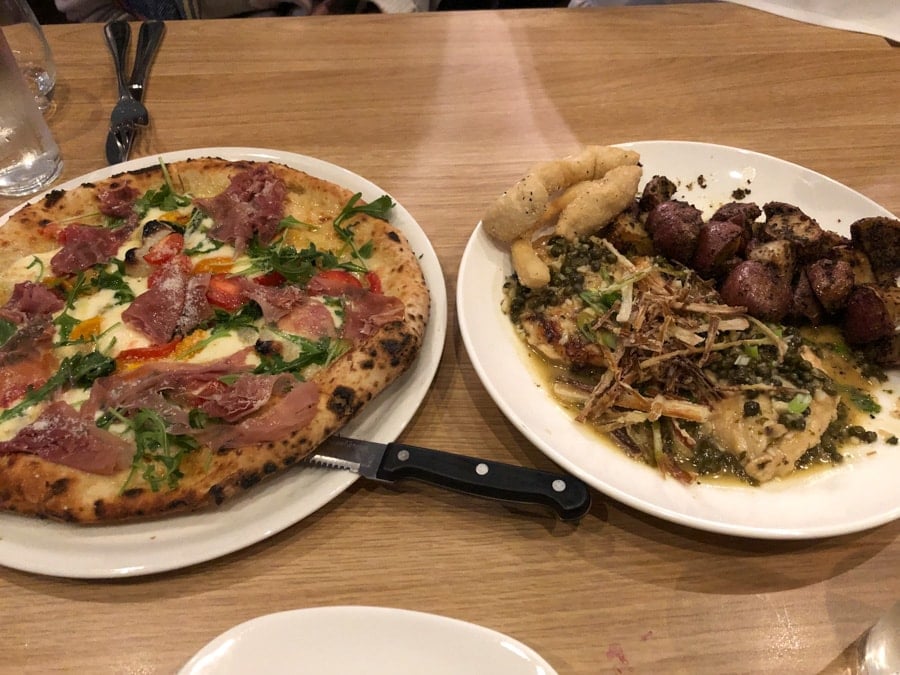 We also made it out on the town for New Year’s Eve – Matt, Riese, and I went to a party at our friends Jack and Megan’s house. (Wes stayed home with the grandparents since it was all older kids at the party and we knew we’d be there late.)

Riese and I stayed until about 9:30 before leaving Matt there (to Riese’s extreme displeasure – she scream cried the entire drive back and it was super fun) and heading back to my in-laws place on our own so I could get her to bed. I was asleep by 10:30 – close enough to midnight. 😉

The only picture I managed to get at the party was this one with my college friend Sarah, who married one of Matt’s high school friends after meeting through us way back in the day (she and I were roommates when Matt and I started dating). It was great to see her, and the others, too! 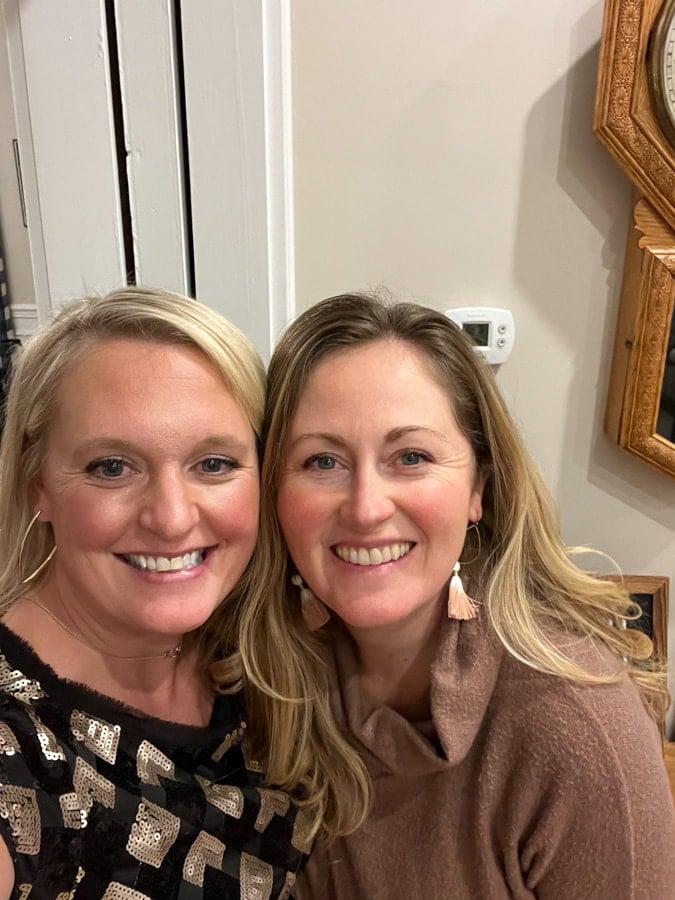 As I mentioned, I got out for a few yoga classes while there – some with friends or my sisters-in-law, and some on my own. It felt really nice to prioritize that time to regulate my nervous system amidst all the noise and chaos at the house with all the little kids around.

Matt and I also got out for 3 runs while we were there, which was a lot of fun as we don’t normally get to run together these days!

I wrote about the first run in my last recap (it was on Christmas Day in frigid temps so we kept it short and sweet), and the second one was on a gorgeous and sunny day (the only sunny day we had while there, actually – it is pretty gray in Pittsburgh area in the winters) with our mutual friend Tom. 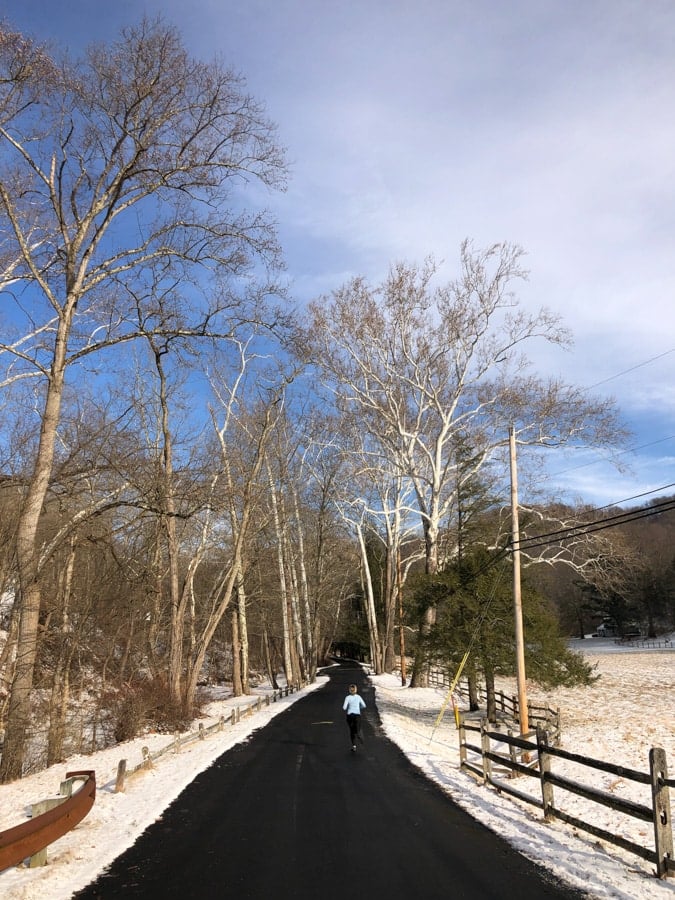 Matt and Tom are best friends from high school and he and I went to college together and are the reason Matt and I met!

We had a great run – chatty and it flew by. And thankfully Tom went much slower than he usually does for us. 😉 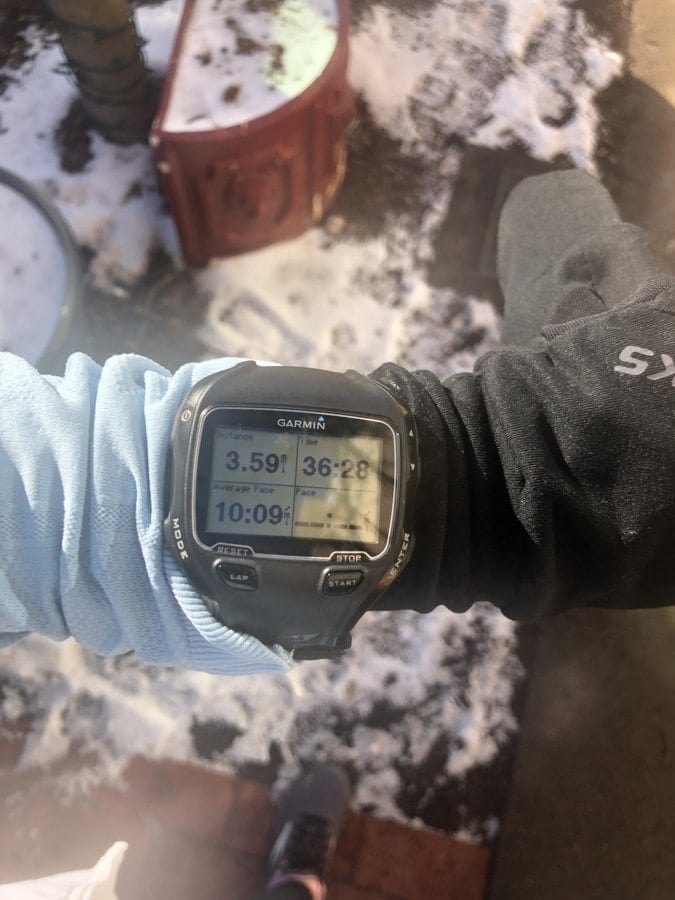 The third run Matt and I got in was on New Year’s Day – we figured getting in some movement before the long drive back to DC later that night would be a good thing!

We followed the same route we ran with Tom earlier in the week, just in reverse, and we stopped a bit earlier for a cool down walk.

I felt much more tired on this run than the earlier ones – the busy week was catching up to me, I think! Although interesting to see now that our pace was a little faster, especially given the reverse route is hillier… 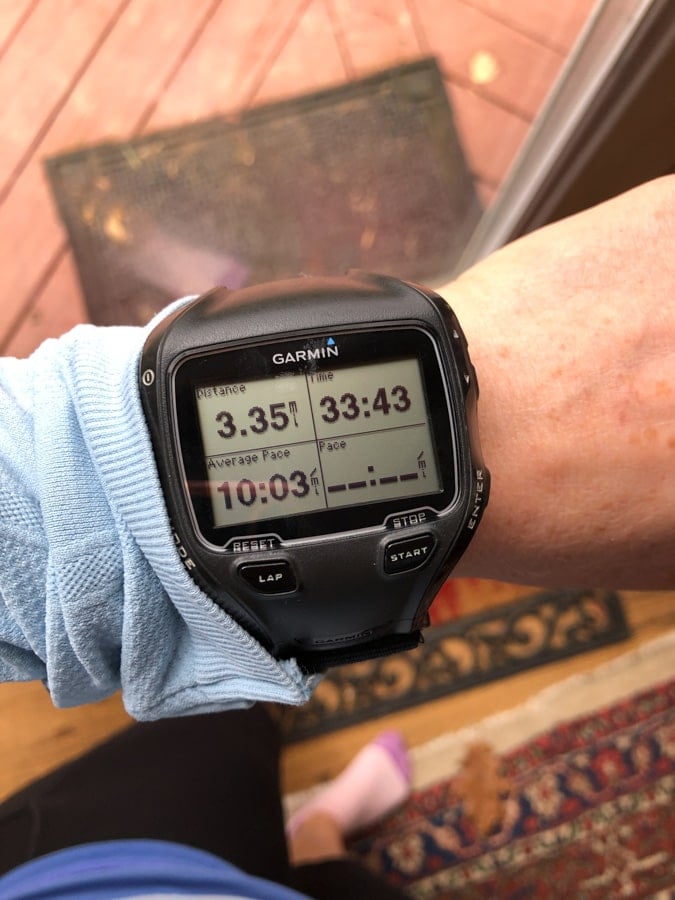 We also got in a hike with friends before leaving town – our friends John and Erin had flight delay issues and weren’t able to be there in time for the New Year’s Eve party, but luckily we got to see them and their kids for a hiking date on New Year’s Day!

Riese was thrilled as they have 3 girls – she hit it off right away with their 6 year old and literally a minute after meeting they were hiking while holding hands – so sweet. My little extrovert!

And Wes was into it once he realized the other people there weren’t going to take him away from us. 😉 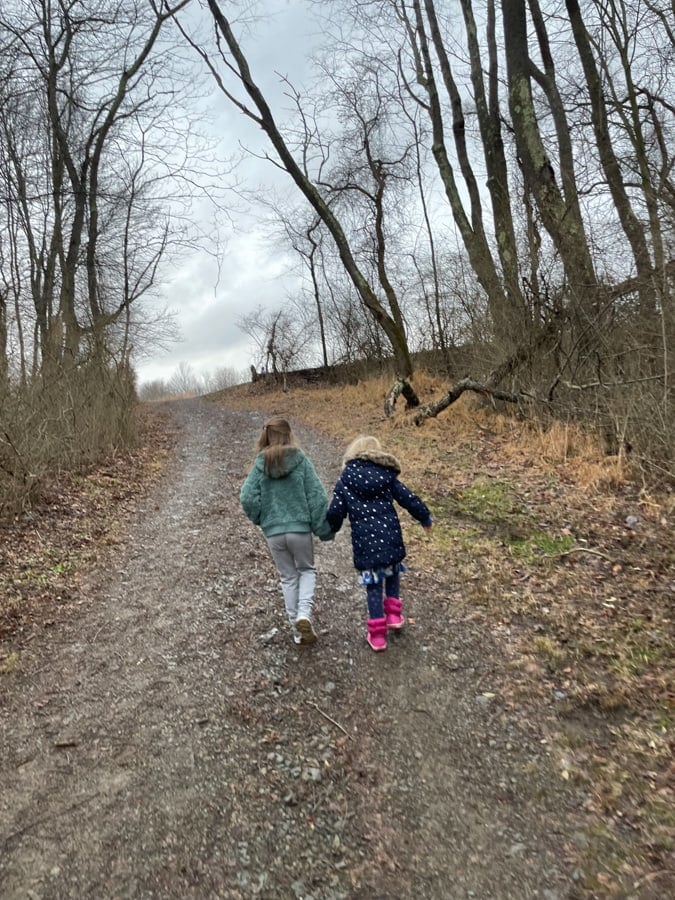 It was also nice to be walking on a trail vs. on the road – there aren’t sidewalks around Matt’s parents house so any of the walks we did involved Wes running along the road, which gave me a lot of anxiety because of the cars going by even though I stayed right next to him the whole time… oof. 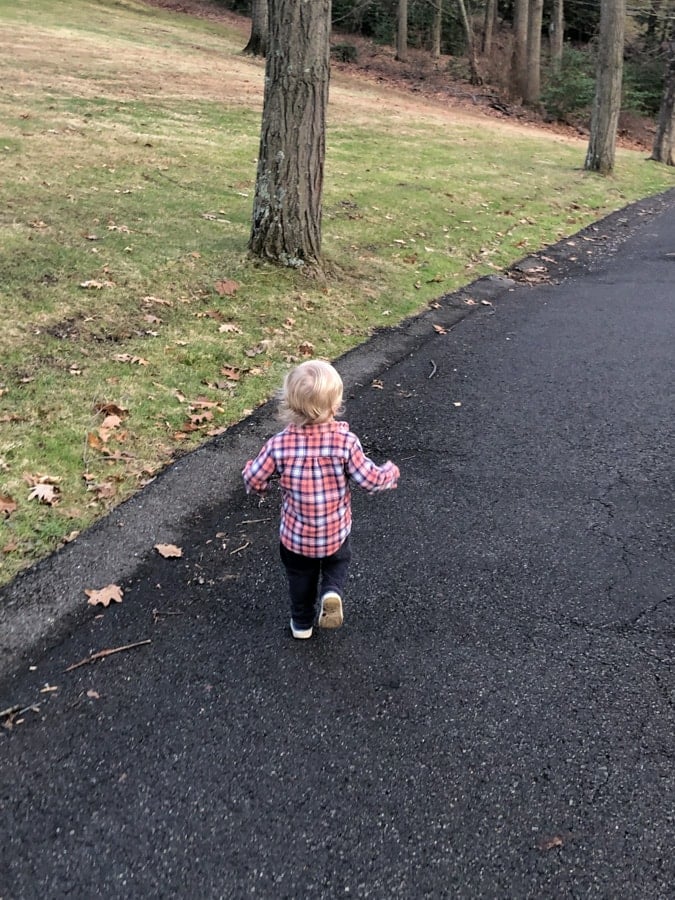 And there you have it! The full recap from the trip.

It was a hectic week but had a lot of fun – it was really nice to be together with all of Matt’s family, and the cousins had SO much fun together. It has been really cute to see them get closer as they get older! 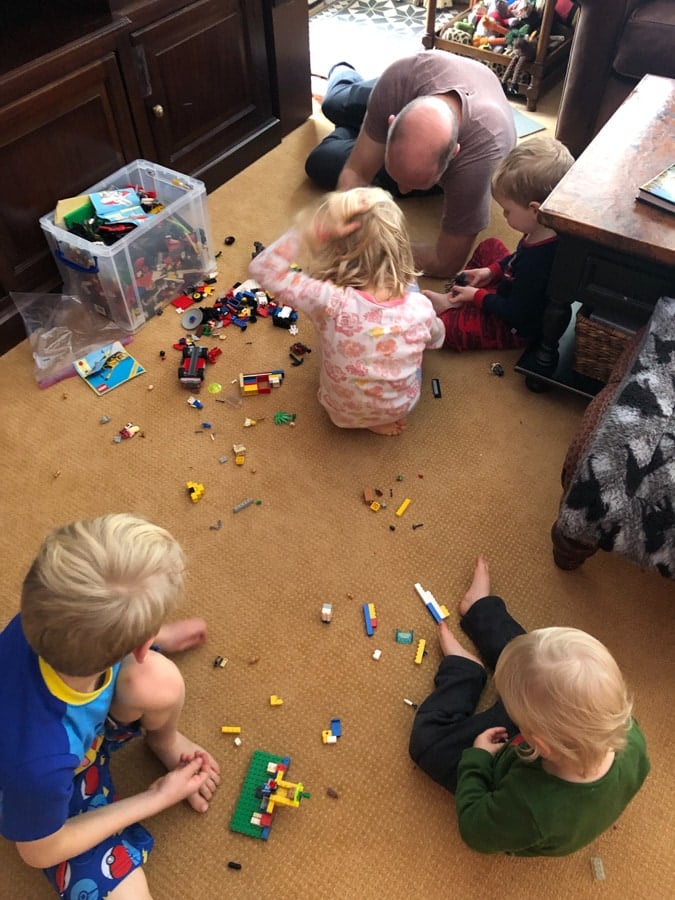 We were sad to say goodbye to our family and friends, but it has also been really nice to get back to our own beds and our routine. I was pretty excited to drop Riese off at school last Tuesday, not gonna lie… 🙂 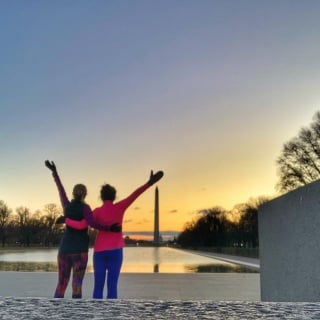 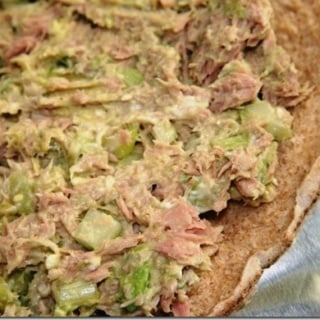 Eats + Exercise from the Week