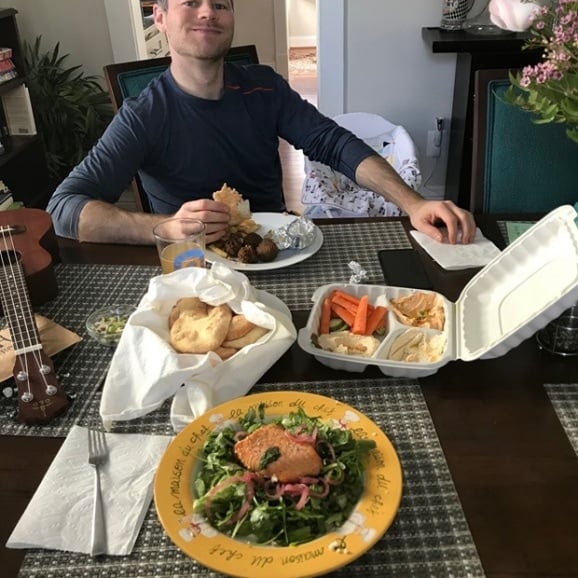 Hi guys! I wanted to pop in with some recent eats and talk a little about how my food cravings have changed now that I’m no longer pregnant. Despite having a newborn at home, Matt and I have been making an effort to enjoy as many home cooked meals as possible – but have also been rocking some delivery (and home cooked meals/deliveries from friends) a fair amount lately as well! 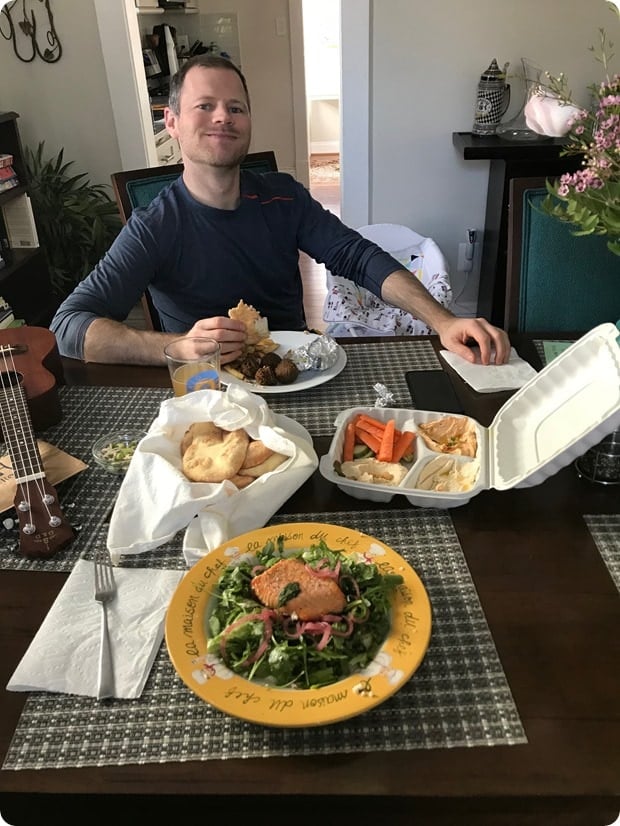 Matt enjoying Lebanese Taverna that his brother Drew and sister-in-law Morgana very sweetly sent us one day for lunch – I’m so happy that I really enjoy salmon again! It was a little hit or miss for a lot of my pregnancy.

Before our baby’s delivery (if you missed it: here’s our baby Riese’s C section birth story), I had all these plans about how we were going to order sushi and have Prosecco at the hospital right after she was born – yeah right. Reality was I was way too nauseous the first night, and by the second and third nights I was too sleep deprived and my stomach was still weird/not normal with all the pain meds and the surgery. I stopped taking the percocet they offered me on day 2 and instead did a high dose ibuprofen, and that fixed the nausea, but I still wasn’t up for much food-wise. I basically ordered oatmeal, cereal, soup, fruit, scrambled eggs – simple stuff – from the hospital dining services and that was that. I had some granola bars from home that hit the spot, too, but food in general was not super awesome those first few days.

Once we got home, my stomach was still a little off for about a week – I was able to eat normal stuff, but I had to eat slowly and I got full pretty quickly, especially at dinnertime. Thankfully my food aversions and mild nausea from the end of pregnancy that had me not loving a lot of foods was gone, though! After relying really heavily on pizza, Italian food, burgers, fries, etc. by the end of pregnancy, it was nice to actually enjoy healthier stuff again! 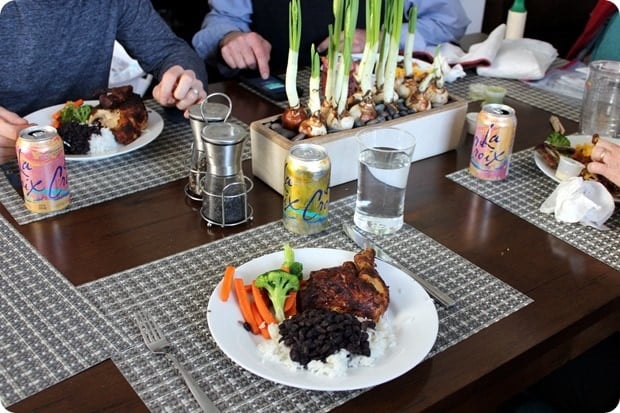 Rice, beans, chicken, and veggies – takeout from a Peruvian chicken place when Matt’s parents were visiting 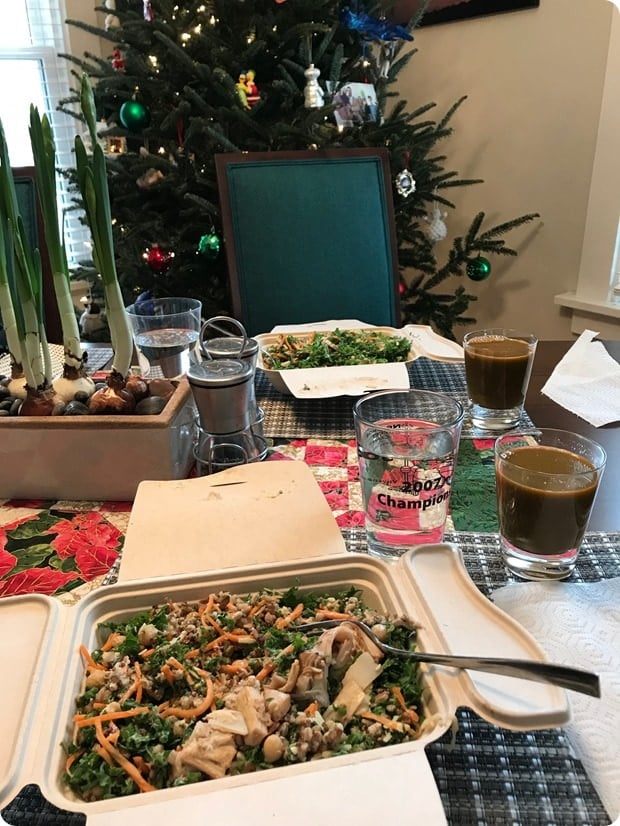 Hooray for liking salad again! This kale caesar my friend Heather brought us one day for lunch was so good

Matt and I have been doing Blue Apron still since coming home from the hospital, so it’s been nice to have those deliveries arrive and us not have to worry about the grocery shopping for 3 of our dinners. Usually I’ll feed Riese while Matt makes dinner for us. Here are some of the ones we’ve had lately that were really good: 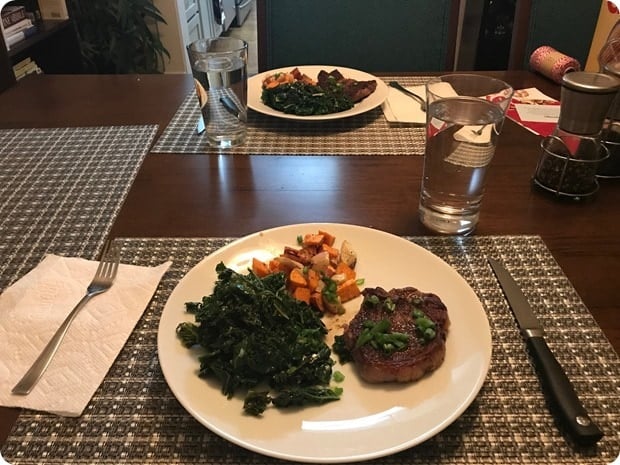 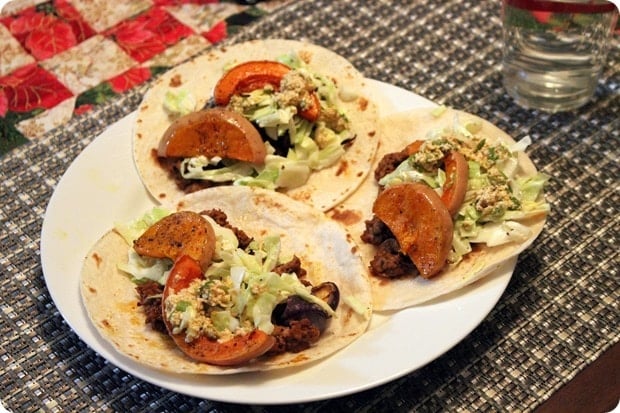 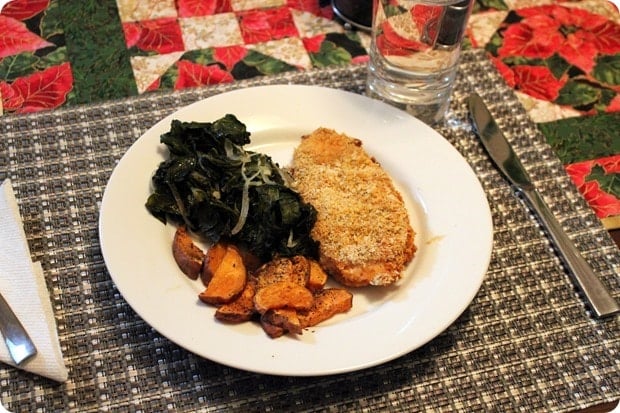 He also made a big pasta, meat, and veggie dish for us one night that we’ve been snacking on as leftovers. 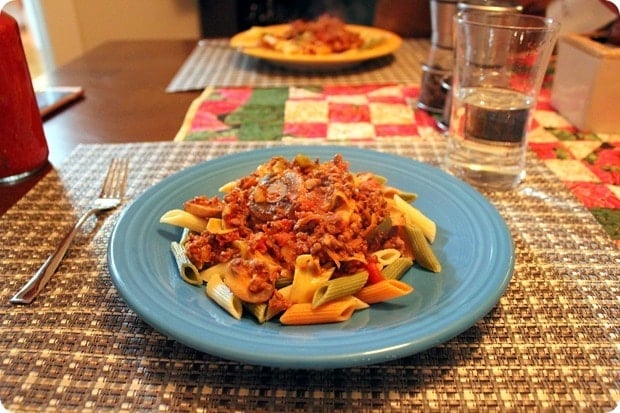 We’ve definitely been hitting up Postmates and Grubhub for delivery some though too! About a week after Riese arrived I finally got my sushi – Matt ordered some for us while I was napping before dinner one night. Soooo good! You know what’s funny though? We realized after it arrived that he had inadvertently ordered all cooked sushi – apparently he was used to that habit from 9 months of doing that! Fail! Lol. Good thing I love eel and shrimp rolls, pregnant or not! 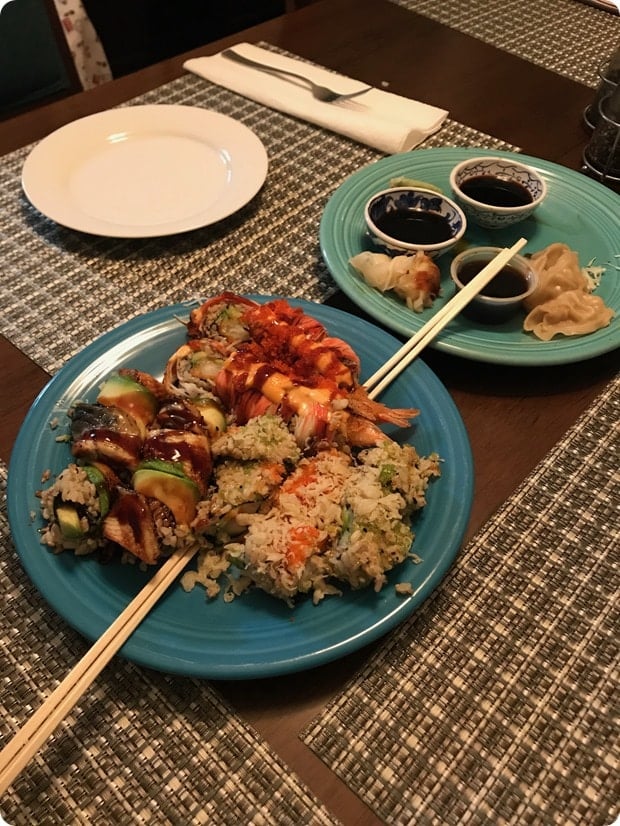 Luckily a few nights later my friend Gina very sweetly sent us more sushi via Postmates – so nice of her! And this time, I got lots of raw stuff. Ah, raw sushi, I missed you!! 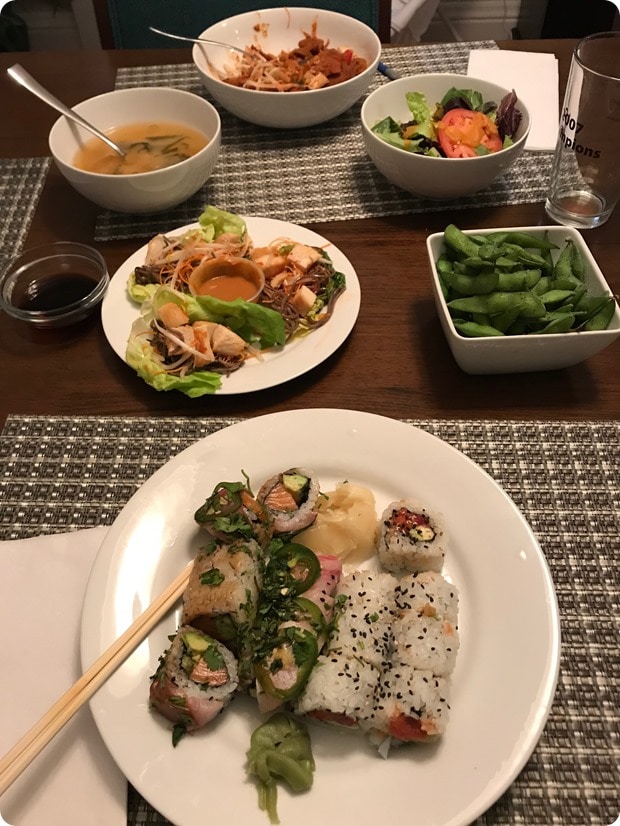 I was also finally up for some bubbly a little over a week after Riese was born – we enjoyed sharing a toast with Matt’s parents while they were here visiting. Mmm… I missed you, bubbly! (I actually have a holiday appetizer recipe coming up on the blog tomorrow that pairs perfectly with bubbly… stay tuned!) 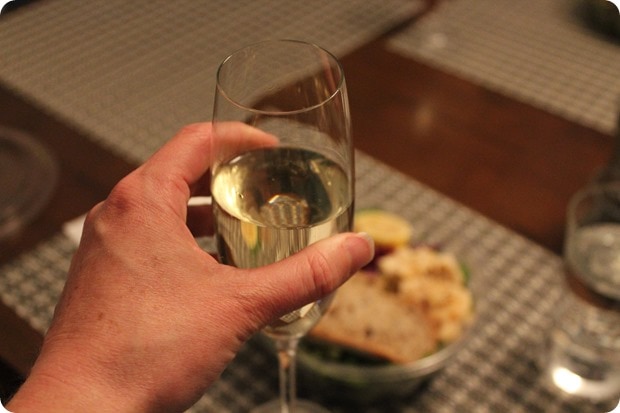 Other eats lately have included lots of eggs for protein – thankfully even though I ate a billion eggs during pregnancy I am still into them now! Re-introducing runny egg yolks = amazing. The runnier the better! Fried eggs are so much more delicious than scrambled eggs in my opinion… but the yolks HAVE to be runny. 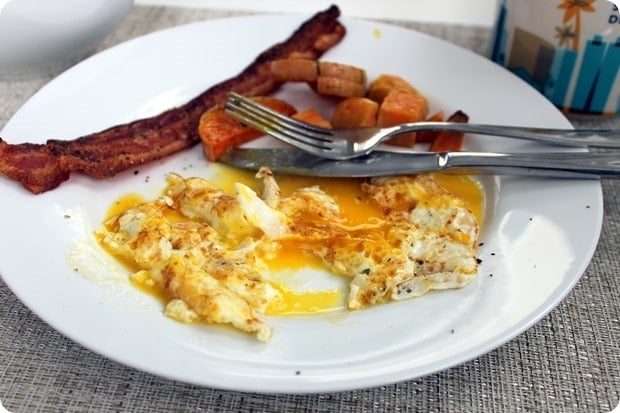 Egg salad is awesome as well, though, and was something I did enjoy during pregnancy too. We made this one day at my parent’s place last week while Matt and I were there hanging out with Riese. The ham and celery were good additions! The other key is adding dijon mustard (rather than just mayo, or just plain Greek yogurt) – it adds a nice extra bit of flavor. 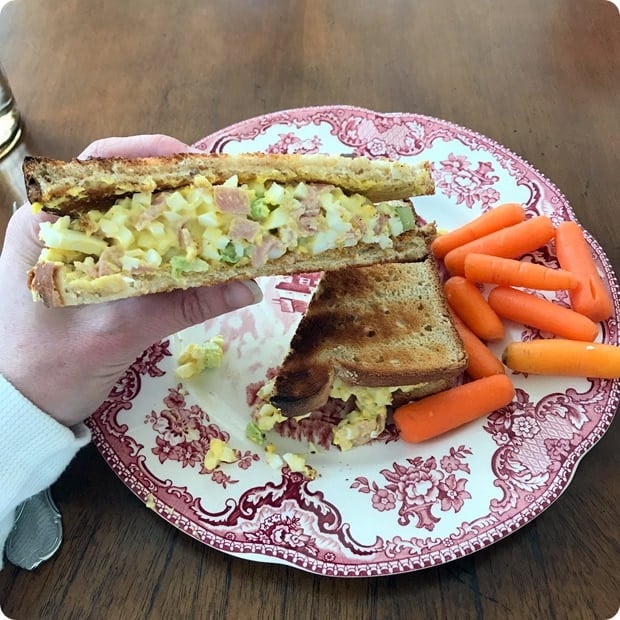 So there you have it – some recent eats of note. I’m feeling much more “normal” about food now which is nice… the pregnancy aversions were getting pretty old, especially because I couldn’t always predict what would go down okay until I started eating it! 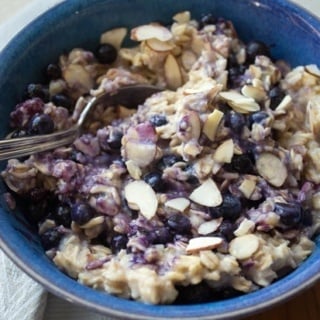 Healthy Recipes, Resources and Tips for the New Year 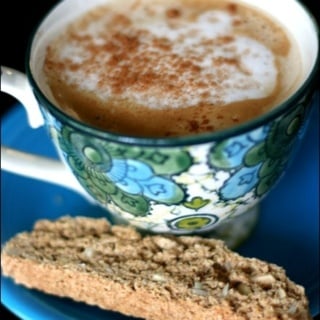 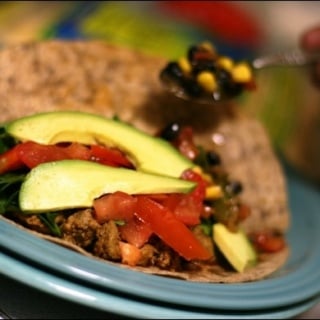 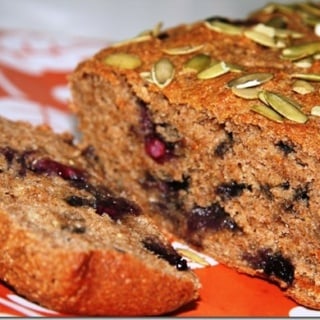