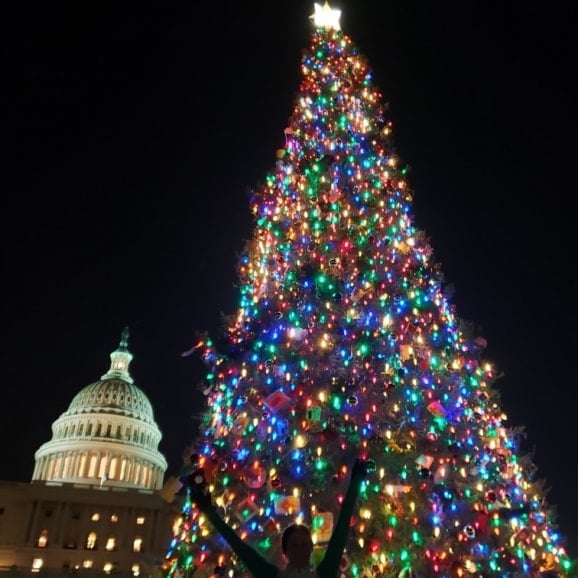 Running into the Holiday Spirit

On Wednesday night, something unusual happened: I went for a run!

I’m NOT an evening workout person – I can occasionally rally for an evening yoga class, but running in particular is really tough for me to motivate in the evenings, unless there’s something extra awesome going on, like: my annual-ish DC Christmas Tree light run with my friend Sokphal!

We’ve done this run together twice before (in 2015 and in 2016 – I had fun re-reading those posts just now!), but missed the past couple years, so I was excited to get the tradition going again this year!

I met Sokphal at her place near Iwo Jima and from there we ran over Memorial Bridge and all the way down the National Mall to the US Botanic Garden. 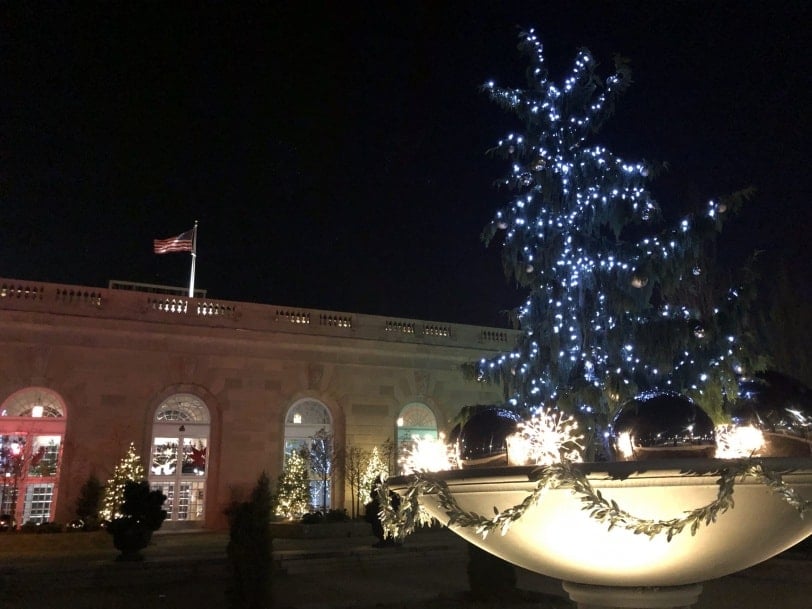 They were closed, but we were able to enjoy the outdoor decorations and their huge beautiful tree through the window. 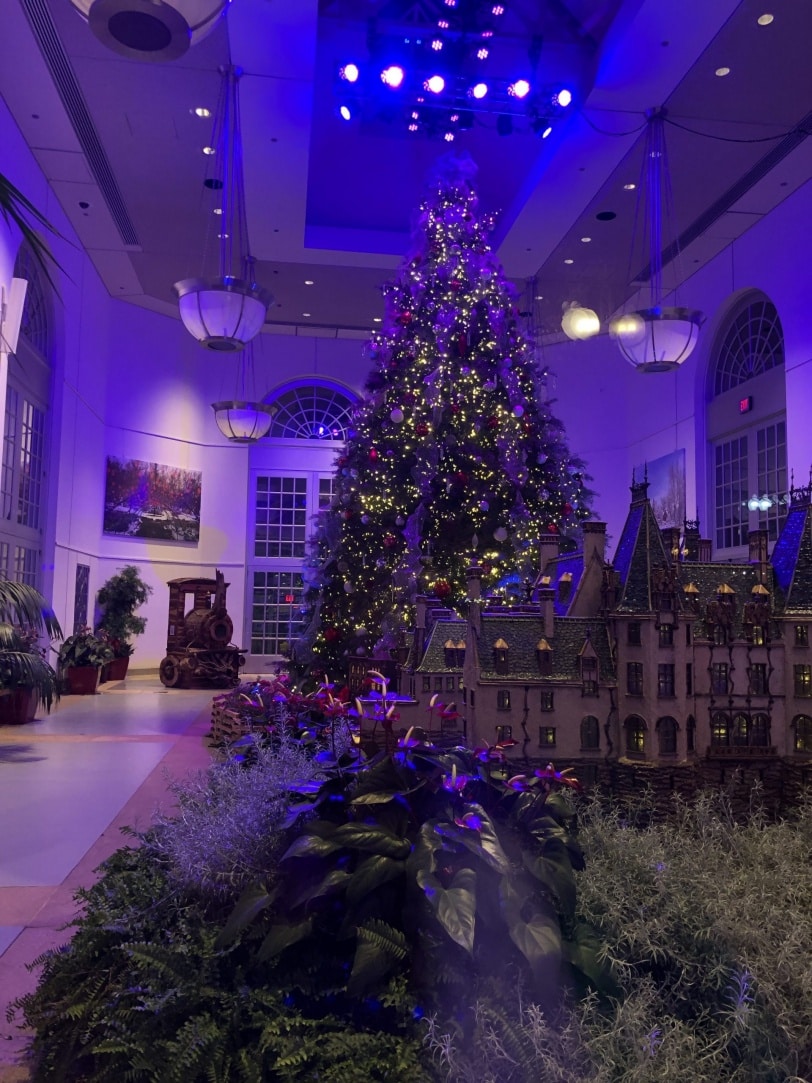 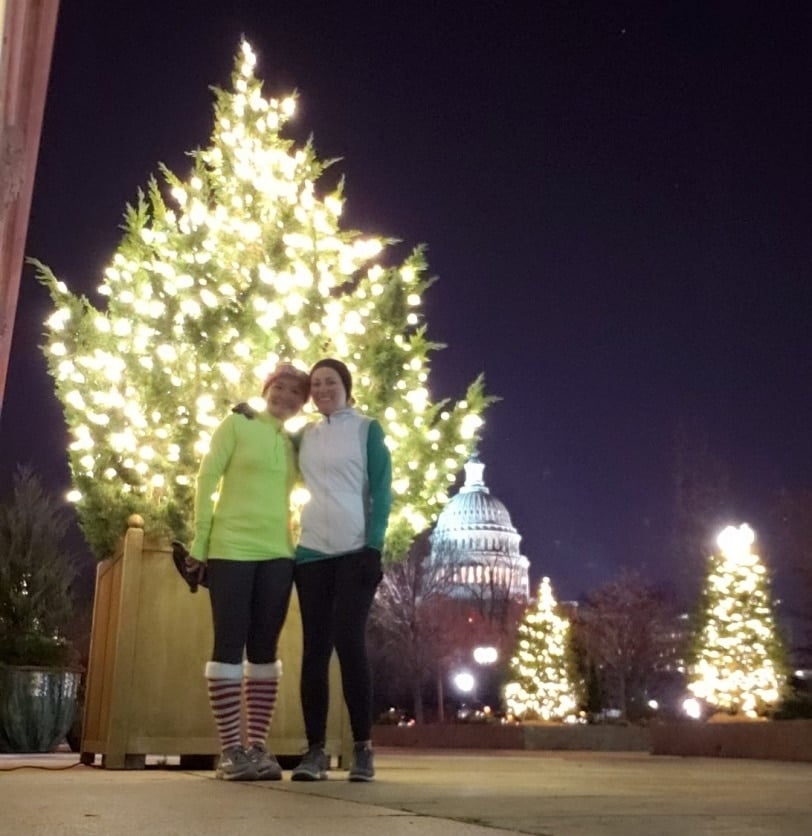 From there, we hit up the Capitol! This is always my favorite tree – so beautiful, especially with the Capitol looming in the background. 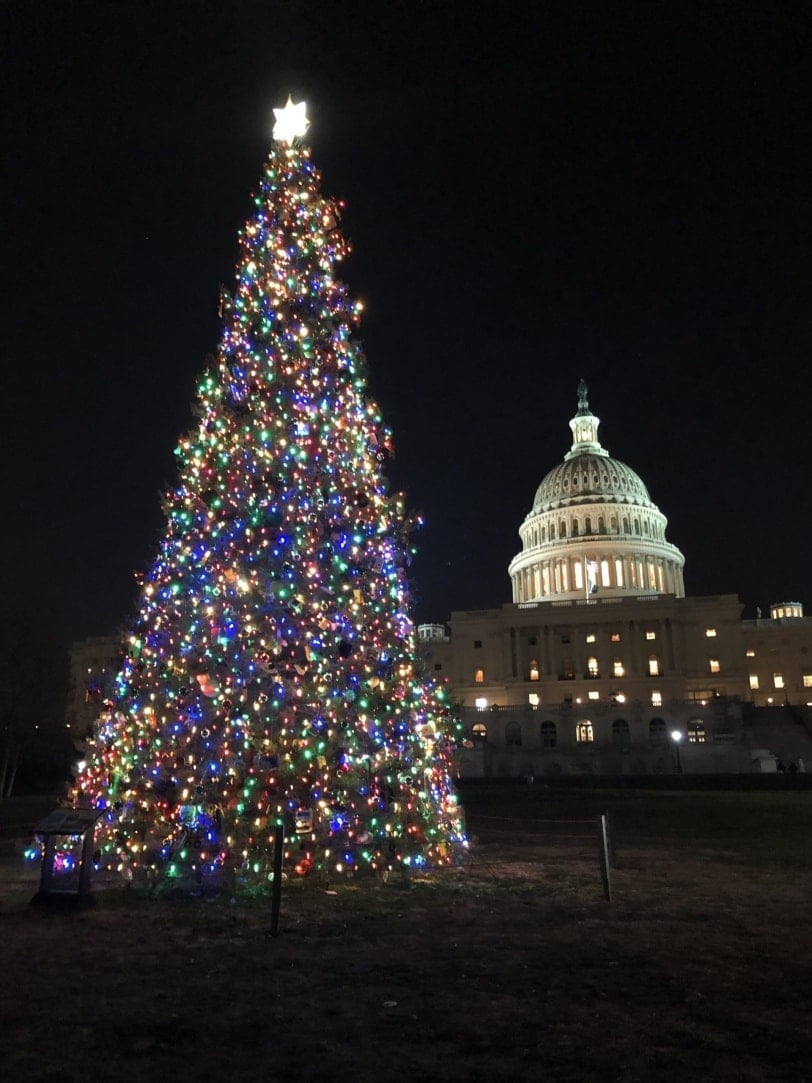 After the Capitol, we ran back down Pennsylvania Avenue towards the White House, with a quick detour to visit the Canadian Embassy tree.

Theirs is always on point – I liked the green and red lights shooting up the columns! 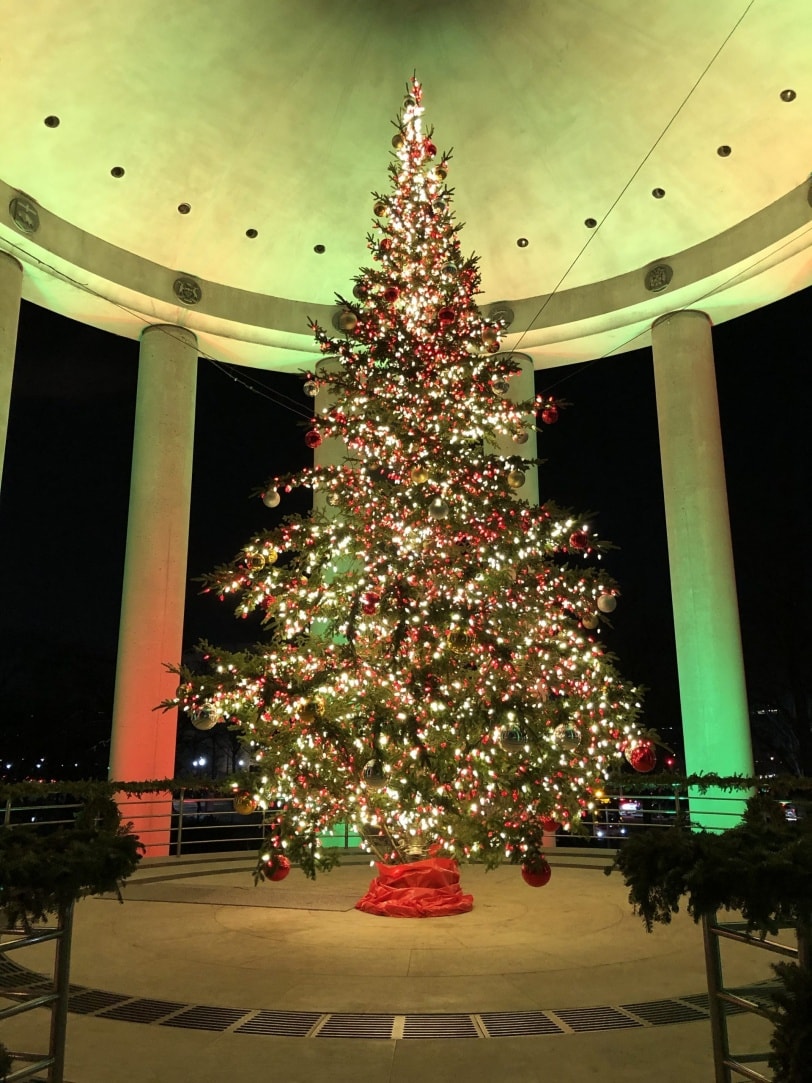 Apparently we took a similar picture to the one below in 2016 – I didn’t remember until I re-read that post! 🙂 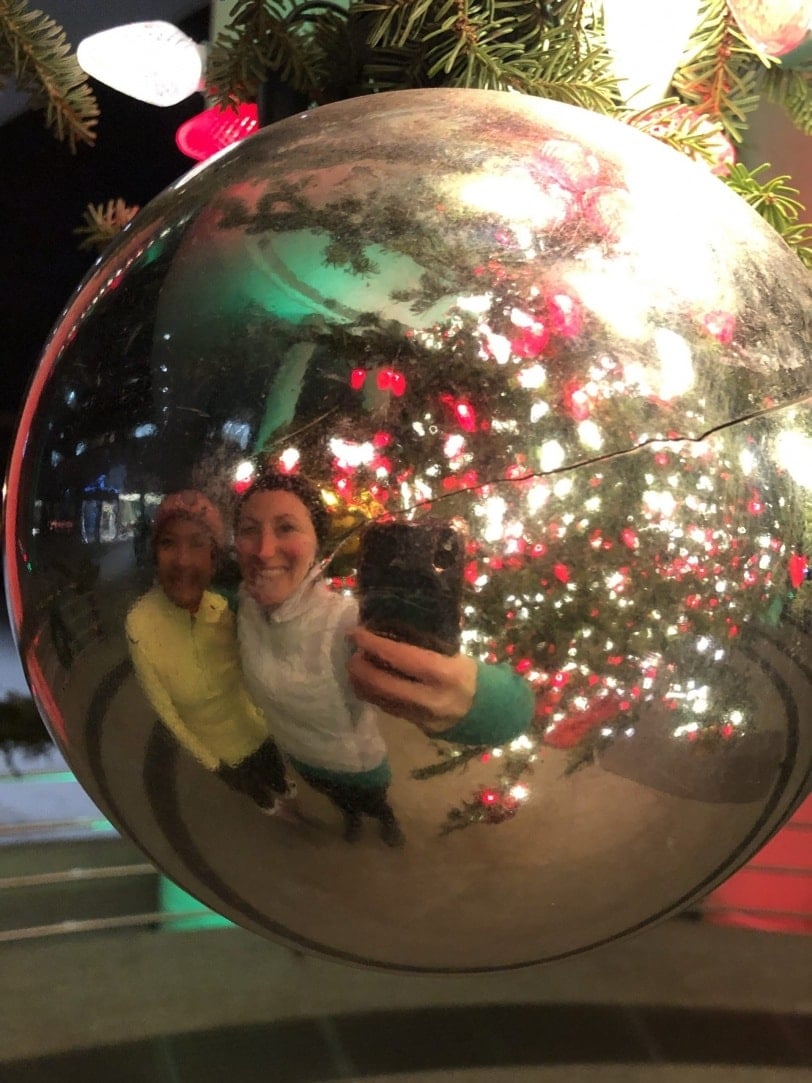 Our last stop on the tour was the National Christmas Tree near the White House!

There were a decent amount of people there but not nearly as many as in previous years, probably because it was “feels like 21 degrees” with the windchill – yikes! I felt okay when we were running but when we stopped we were both like – okay it’s FREEZING! 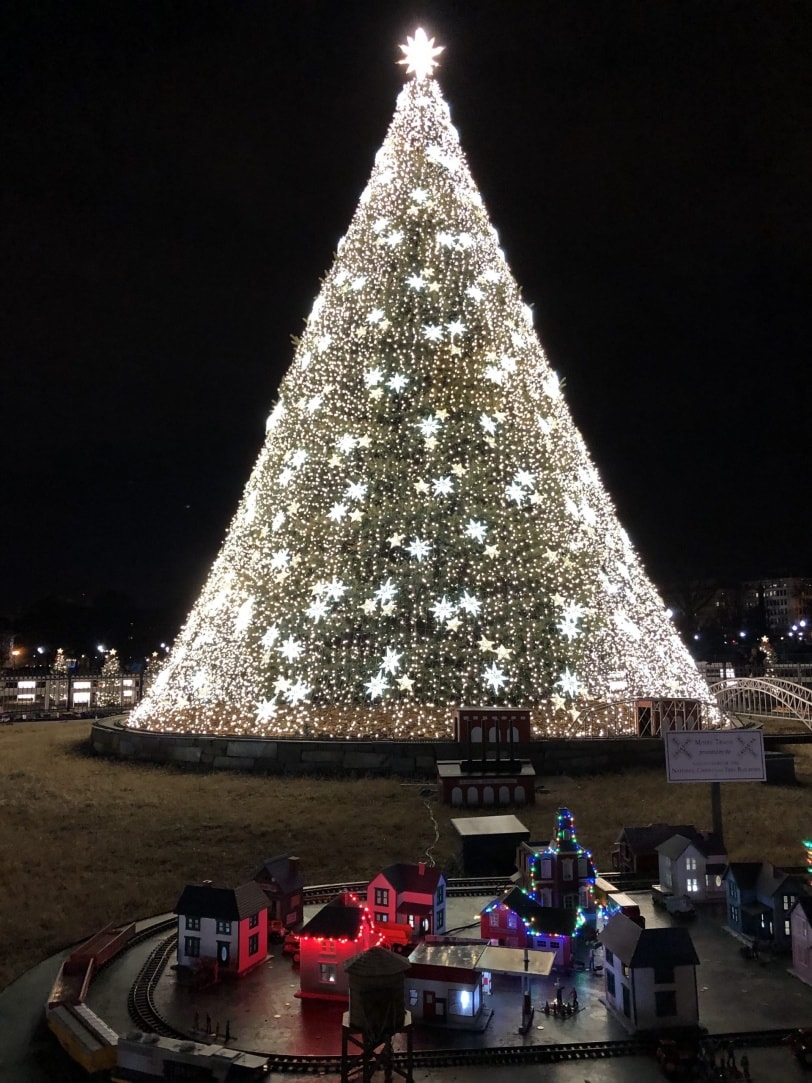 Each U.S. state/territory has their own mini tree circling the big National tree, and I love the trains set up at the feet of the big main tree! 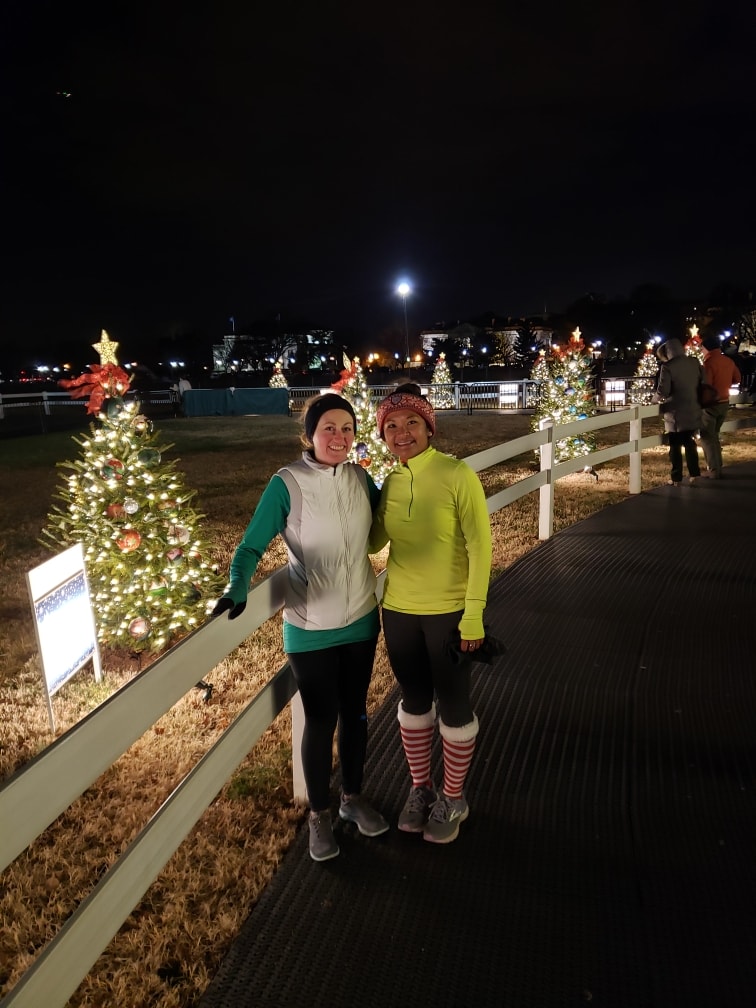 By this point we had run just about 5 miles so we finished it out by running a few extra blocks, and then called an Uber. It was definitely time to defrost!

I felt like we were running at a good clip (for me right now!) while we were out there, and when Sokphal showed me her watch stats, I was right! It felt surprisingly good considering I’m not usually an evening workout person. 😉 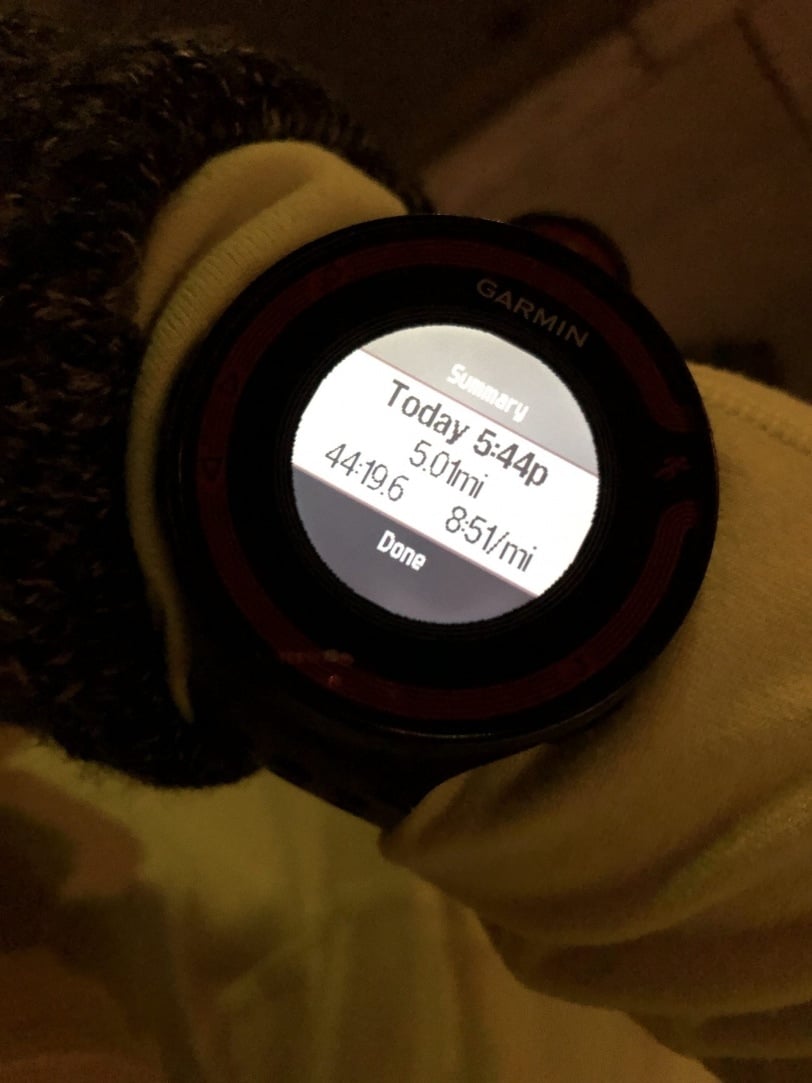 Such a fun night – thanks for braving the super cold and windy weather with me Sokphal! Until next time. 🙂

I got home just in time to read Riese her last book before bed, and then I chowed down – Matt and Riese made salmon tacos with some slaw and guac and they were delicious. 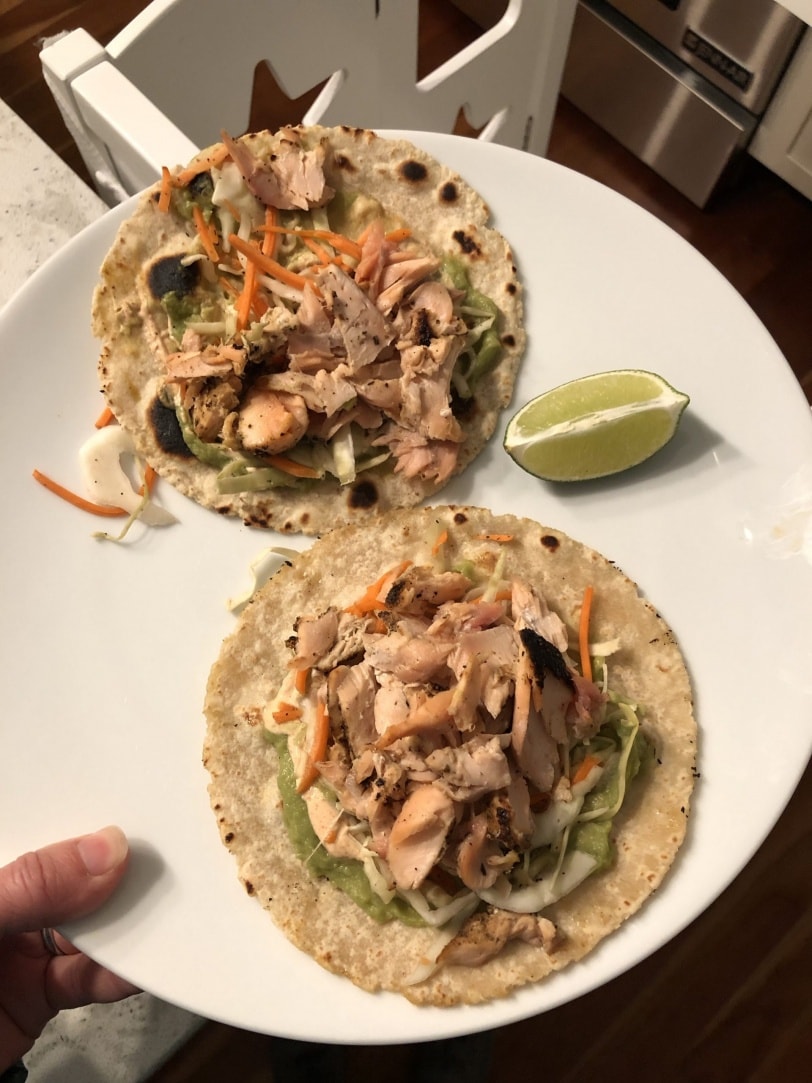 I have to say, even though evening workouts are super hard for me to motivate… coming home, having dinner, and then relaxing and going to bed was pretty amazing vs. the usual getting home and starting the day, trying to make/have breakfast/shower while entertaining Riese, etc. But… there’s just something about starting your day with some movement that feels so good!

Anyway – another yummy meal we had this week was meatloaf – always a hit! Riese LOVED it too. Plus roasted potatoes and sauteed garlicky kale. 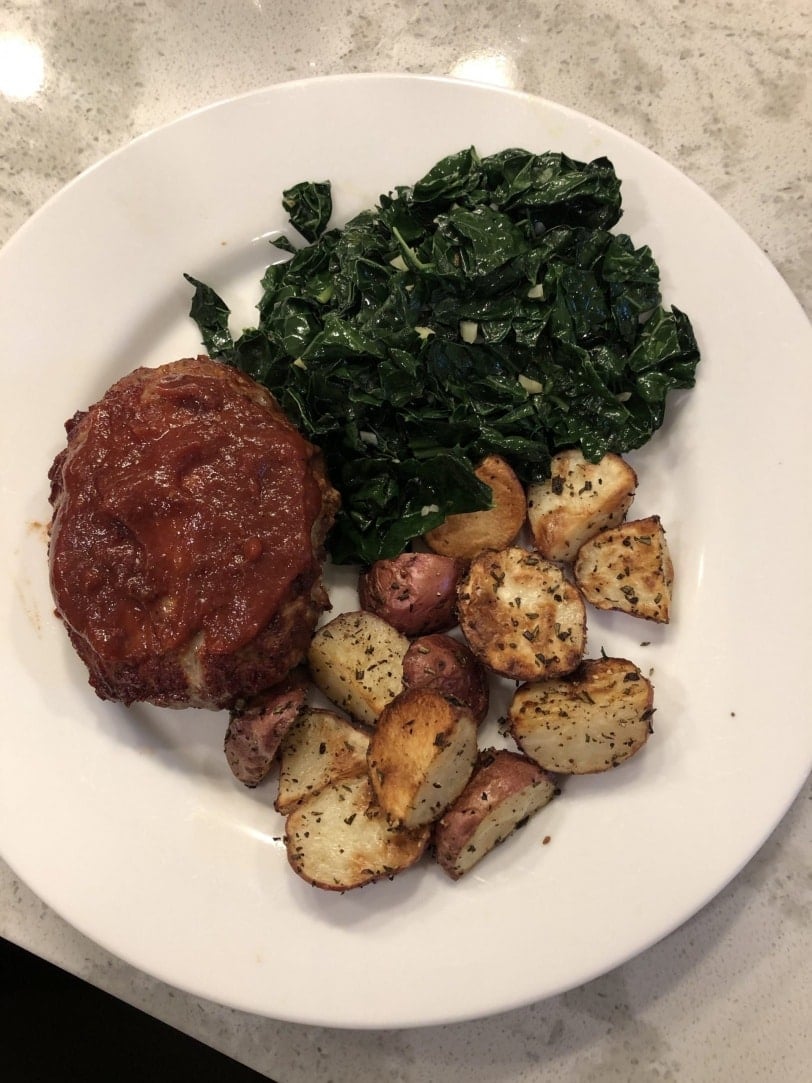 Last night, Matt was out playing soccer and Riese and I made my Mexican Lasagna – hadn’t had that in too long! 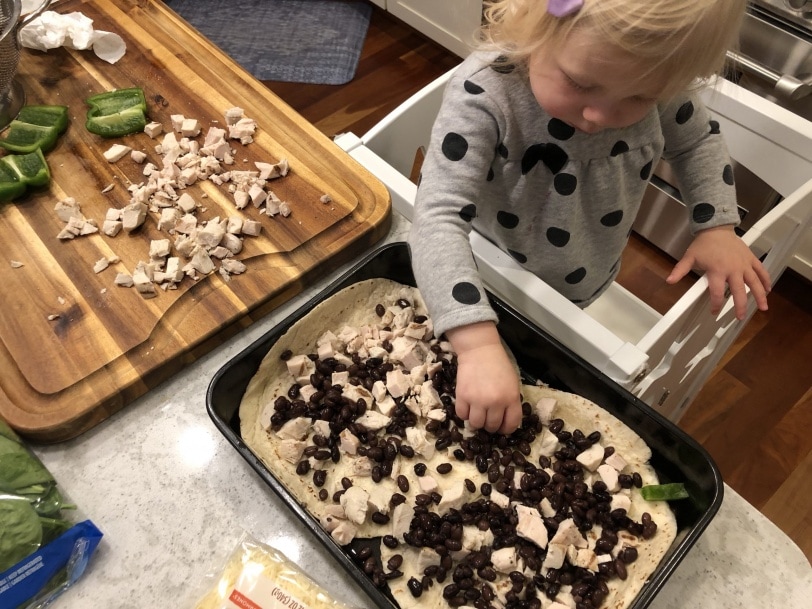 My sous chef “helped” by eating all the ingredients. 😉 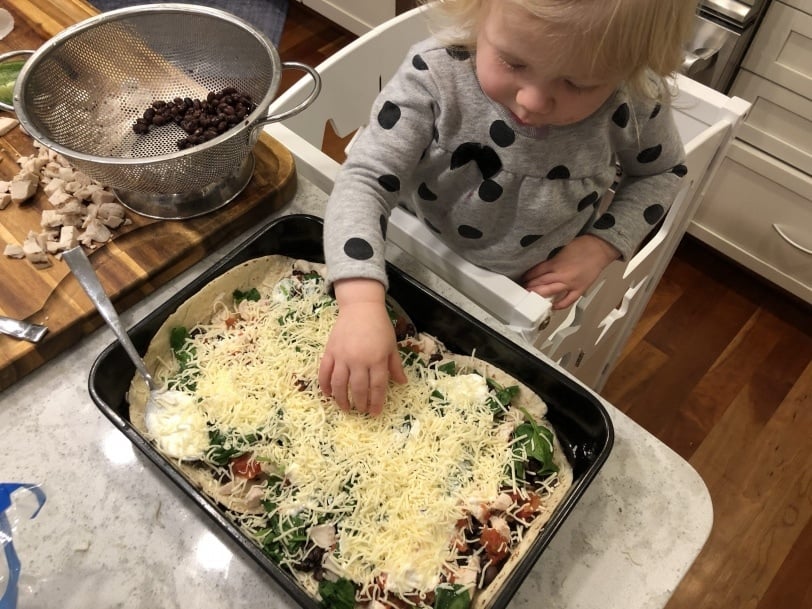 I forgot to get a final shot, but it was delicious!

I will leave you with a picture of the yummy pizza that Riese and Freyja made me this week. 😉 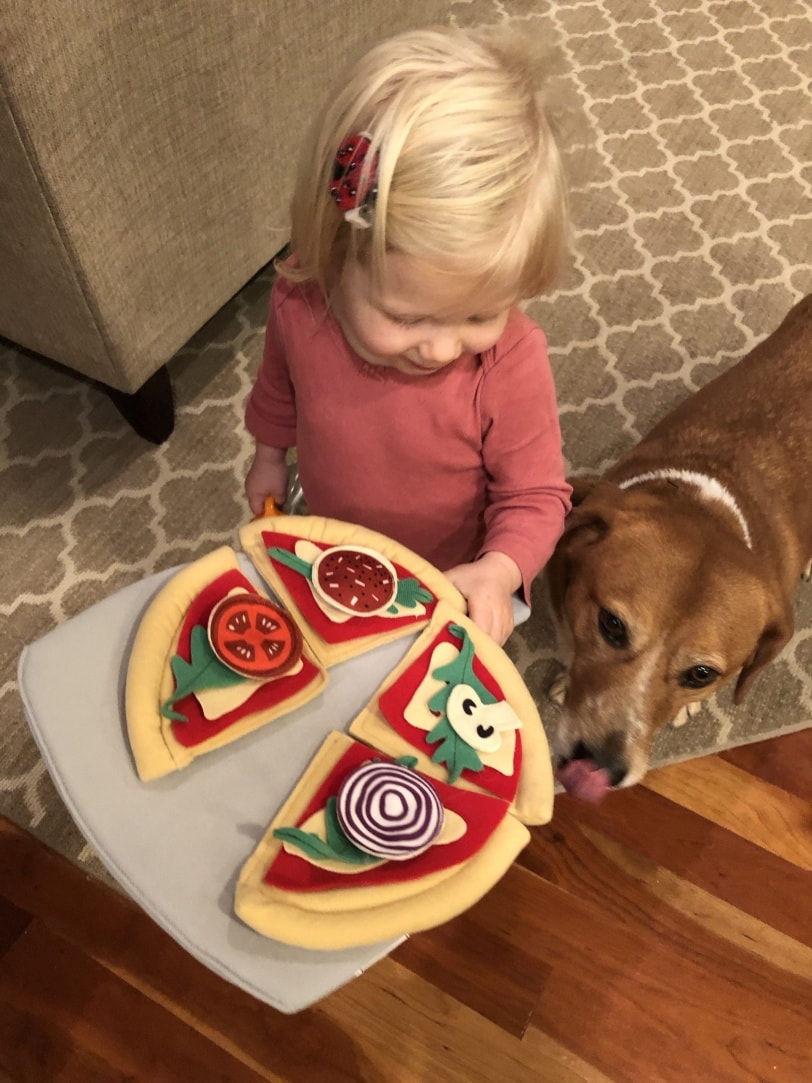 I hope you guys have a great day – I have a dentist appointment this afternoon (ugh, my fifth in 2 months… I had so many freaking cavities that apparently appeared during pregnancy/postpartum – has anyone else had that happen? – and two required caps), but then I’m looking forward to kicking off the holiday festivities!

We don’t have any big plans this weekend, but my brother and his wife arrive on Monday! We are staying here for Christmas and then going to Aspen with my family for a week on the 27th – I’m excited! Any Aspen tips/recs, I’d love to hear them!

Also – is it too early to get Riese on some skis?! 🙂 If you’re a skier, how old were you when you learned? I didn’t go for the first time until I was 17, and I feel like by that point I was old enough to be scared… I think it would have been much easier if I’d learned as a kid, but who knows!

Have a good one, friends! I have a post scheduled for you guys on Monday, but after that I’m planning to take the rest of the year off of blogging to give myself a nice break and to enjoy our Aspen adventures. After Monday, I’ll be back to posting on January 6! 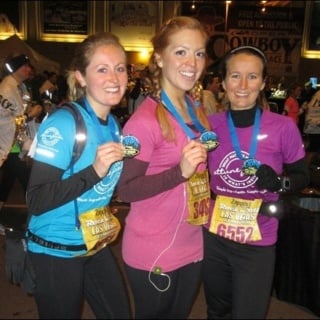 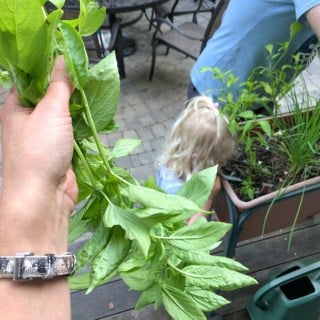 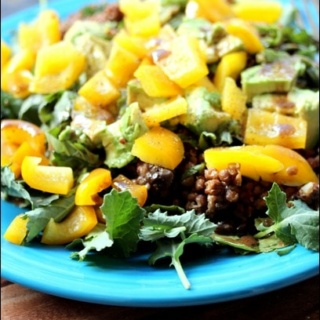 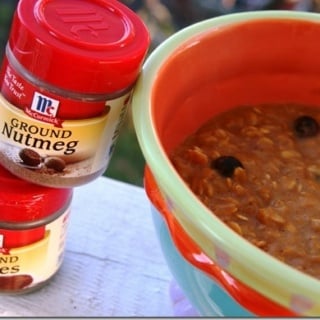