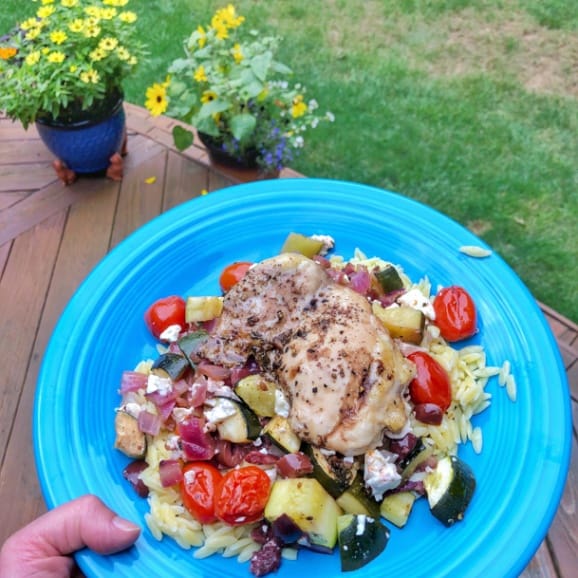 Does anyone else feel like this week absolutely flew by? I can’t believe it’s Friday already!

We are still in Pittsburgh area with Matt’s family, and we are still having lots of good meals!

One night this week I made my Mediterranean Sheet Pan Chicken Thighs for everyone, which is always a crowd pleaser. If you haven’t tried that recipe yet, do it! Super easy and so good. 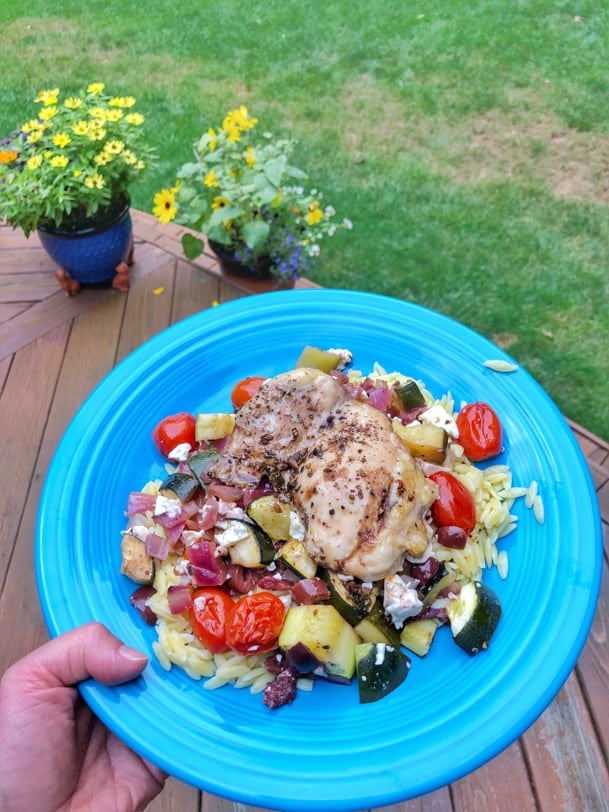 We served the dish atop orzo and had some unpictured pita and baba ganoush with it, too, which was a good addition flavor-wise.

To make this dish, you just place chicken thighs and veggies on a sheet pan, drizzle them with an olive oil, balsamic vinegar, oregano, garlic, and salt and pepper situation, and roast! At the end of the cooking you add some feta and chopped olives to the mix, too, or you can just add those when you serve.

It’s great atop orzo as I mentioned, or you can have it with any other grain.

Chicken thighs are always so much more flavorful and juicy than chicken breasts – we’ve been cooking with them a lot more lately! 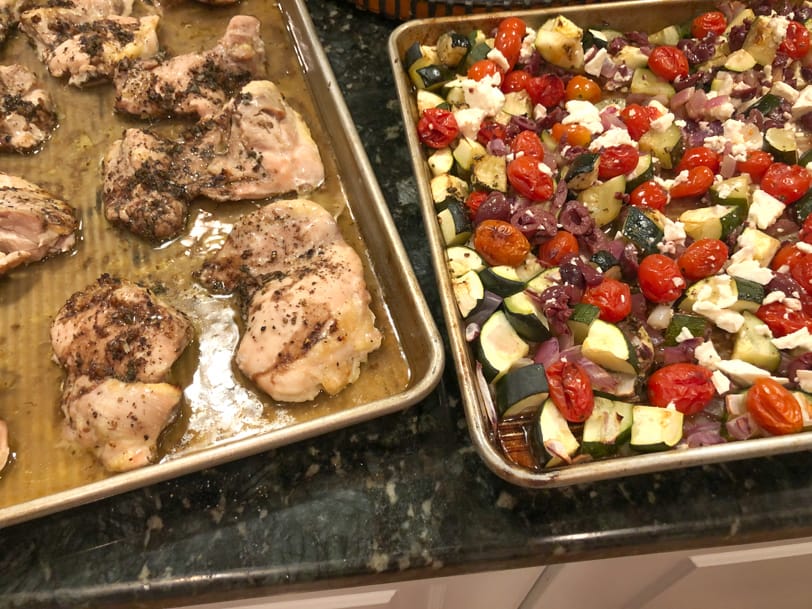 We had another good dinner last night – Matt’s brother Drew and his wife Morgana made a combination of my Mexican Lasagna and my Sweet Potato Black Bean Veggie Enchiladas! 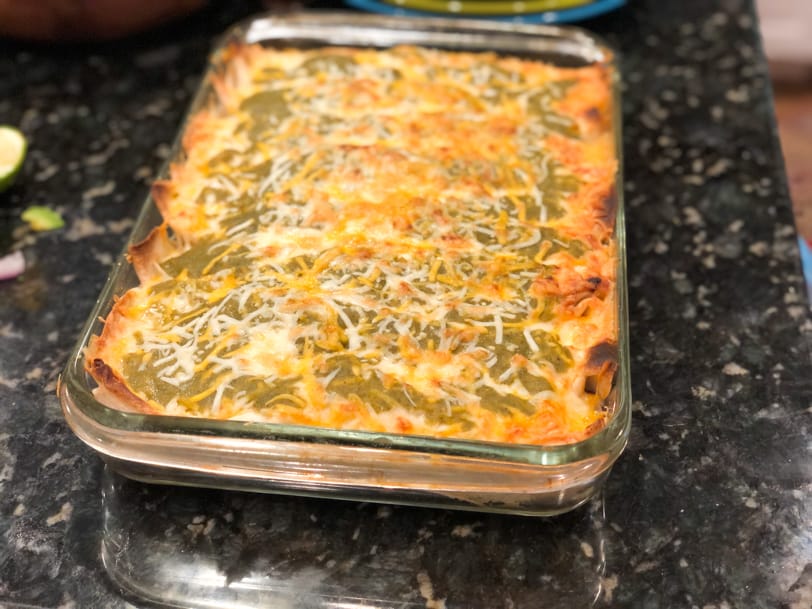 It was basically my Mexican Lasagna recipe, but they mixed together all the ingredients and rolled up the tortillas instead of doing layers. And then topped it all with some enchilada sauce!

Apparently they make this all the time, which was fun to hear! They said my Sheet Pan Dinners and Comforting Pumpkin Quinoa are other faves… I haven’t made that quinoa recipe in ages! 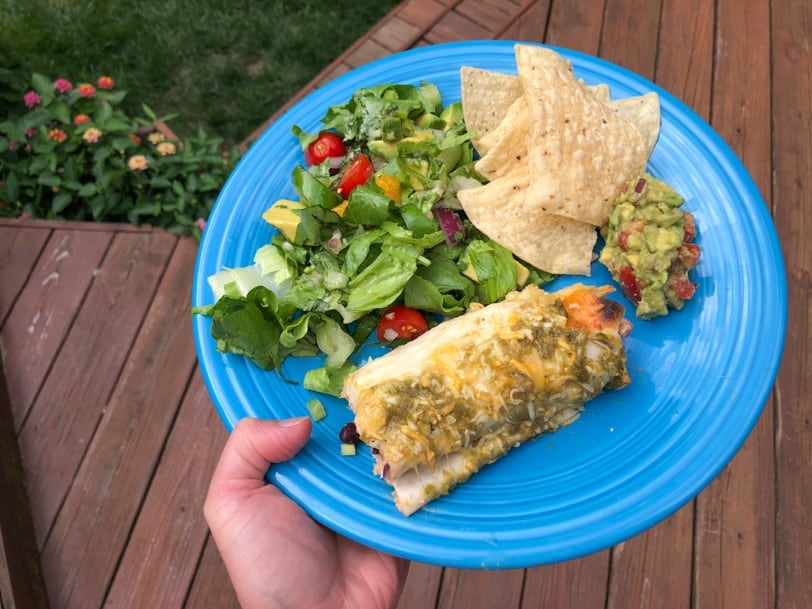 Anyway – the chicken for the enchiladas was cooked in the slow cooker – they just put the chicken breasts in there earlier in the afternoon with a jar of salsa and that was that! Once it was cooked it was easy to shred and the flavors went well with the rest of the theme. 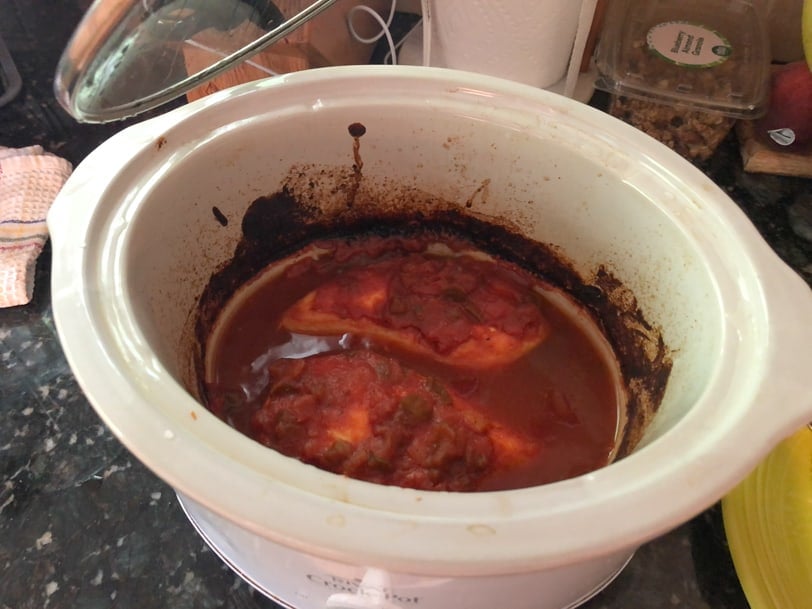 Another night this week we had dinner at the pool, which was a fun treat! It was a gorgeous afternoon and we practically had the place to ourselves.

The smell of chlorine always makes me feel really nostalgic because I spent so much time in pools when I was a kid… I love the water and was always on swim teams! Riese had a blast – she loves the pool, too.

For dinner at the pool, I had the salmon tacos and curly fries, and the fries were on point. Super crispy, just how I like them! 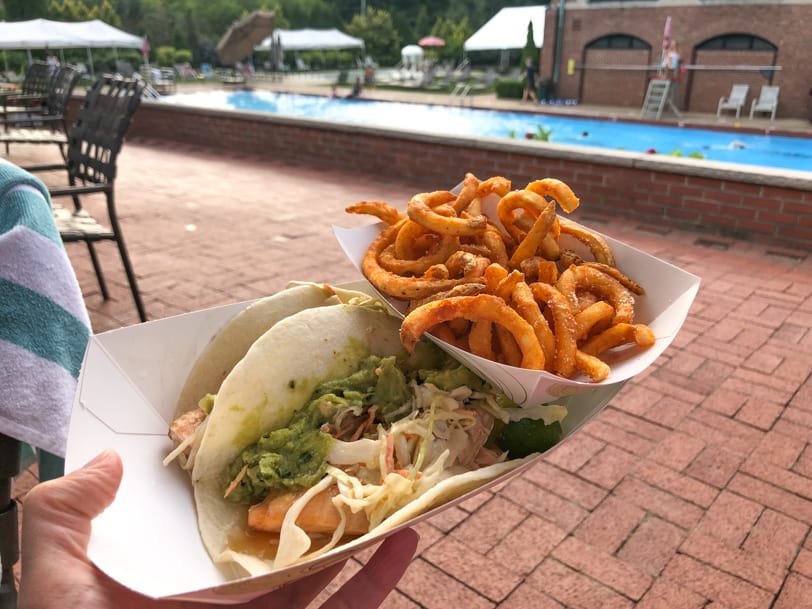 Lunches have been the usual mix of dinner leftovers thrown together – I only got one lunch photo, below. It was one of those “toss half the random stuff in the fridge on salad” type lunches. 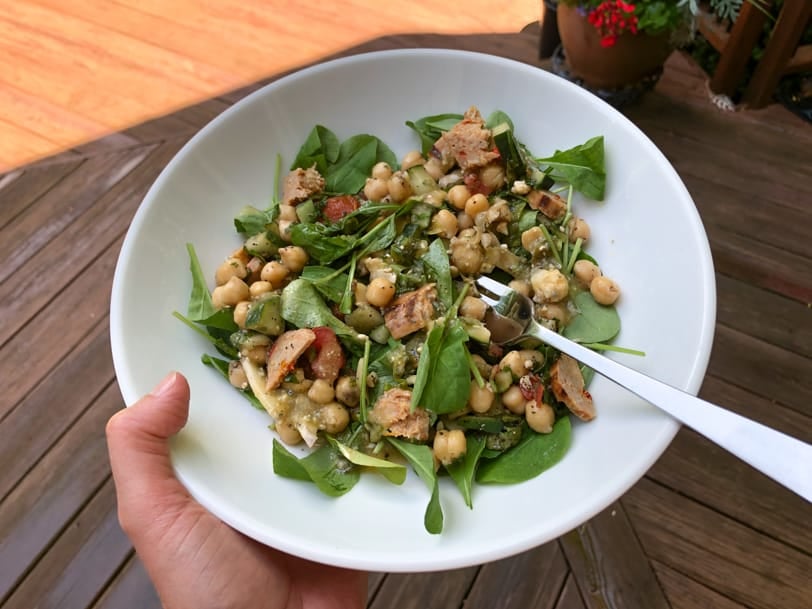 And breakfast every day has been English muffins with cheese and egg and fruit! 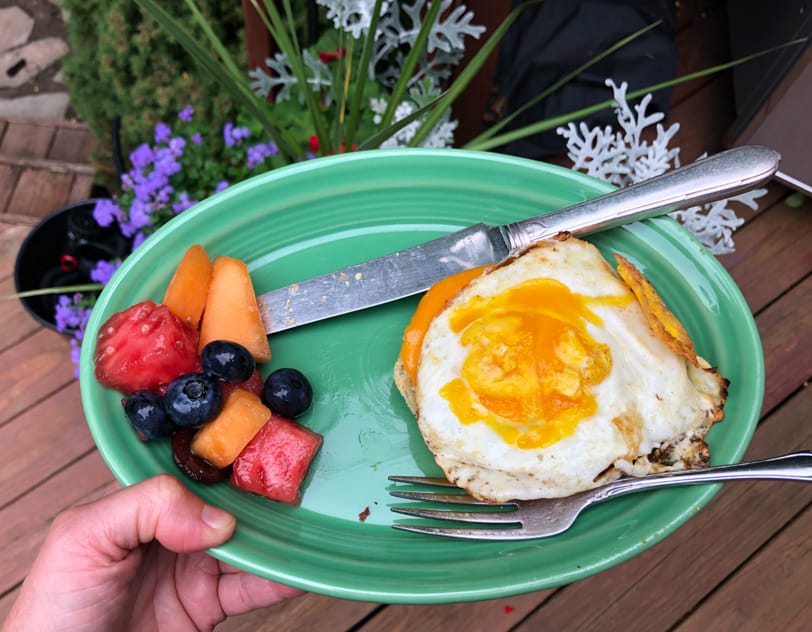 It has been so nice here this week – with the exception of Tuesday, which was a little rainy, every day has been sunny in the high 70’s/low 80’s with lower humidity.

Riese and I have taken advantage with some walks in town and on some trails. (Yes, she has socks on her hands, because… why not?) 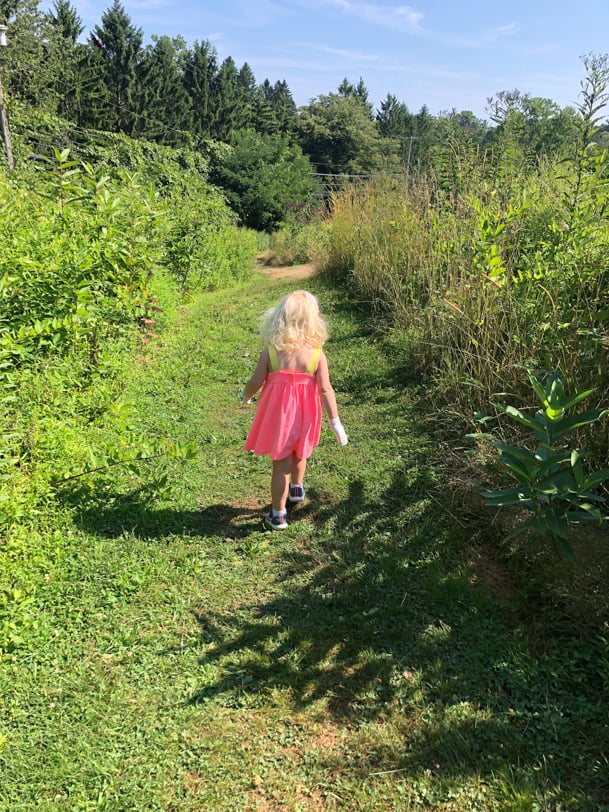 And I did a fun distanced trail walk yesterday afternoon with my college friend Sarah, who lives here. It was really nice to catch up with her and it was so pretty out in the woods! 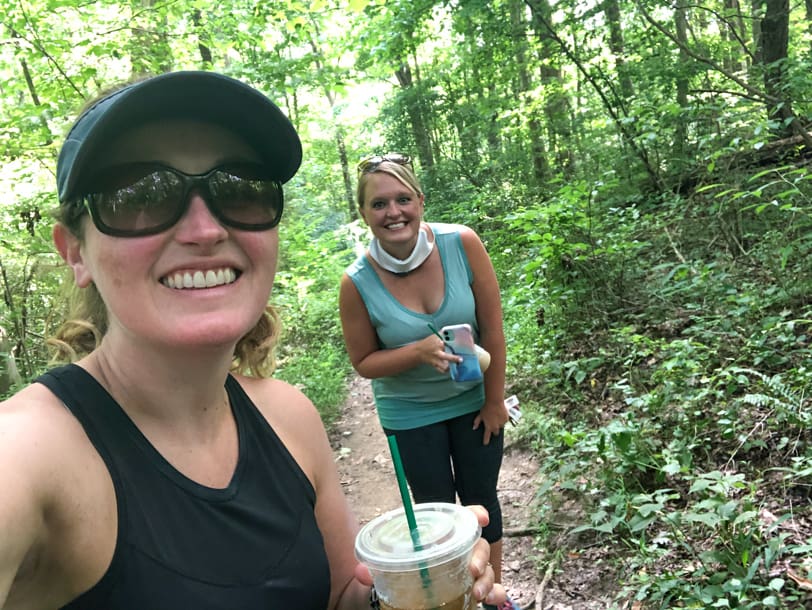 I did a jog one morning, too, and it was 62 degrees when I started – whoa!! Such a treat. Matt and I have a run date planned for this weekend which I’m excited about, too.

The other fitness this week was the usual Tuesday + Thursday morning Mauney Fit boot camp led by Matt’s brother Drew! We’ve been doing them out on the deck which is nice because the mornings have been so cool. 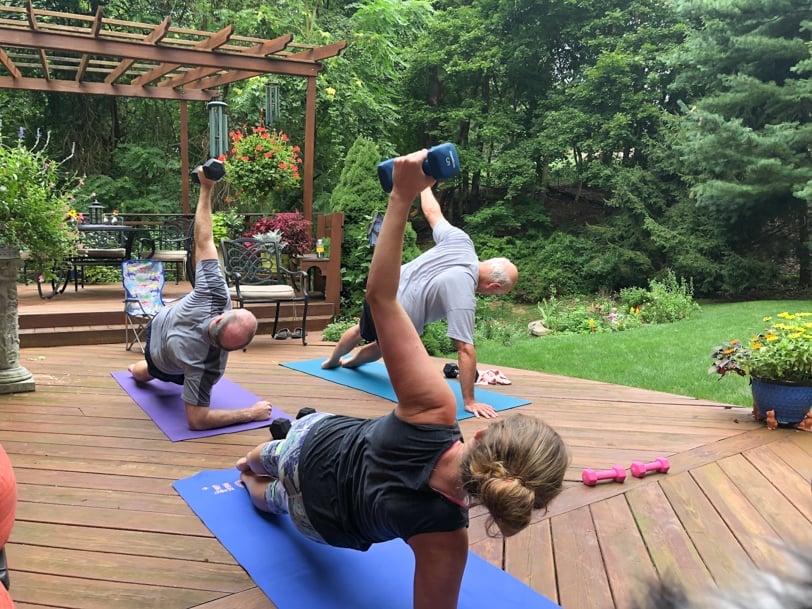 Lastly, I’m super excited because I (finally, heh) convinced my in-laws to start composting!! Check out my How to Start Composting at Home post for how to get going – you’ll be surprised by how much food waste you save from the trash!

He got the rotating composter I mentioned in that post (we have the non-rotating one) and it’s pretty cool! 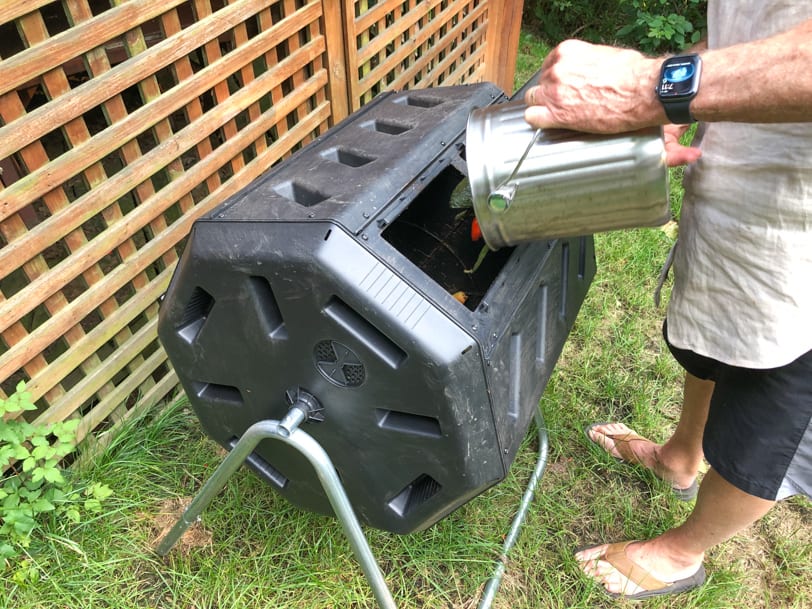 Have a nice weekend and I’ll see you guys back here on Monday with a recap! My Overnight Crockpot French Toast Casserole is going to happen… I’m excited. 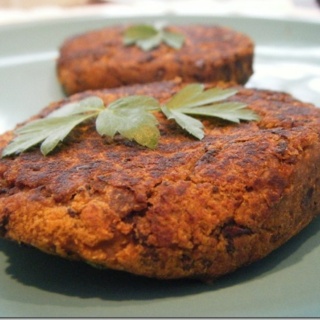 Veggie Burgers with a Twist 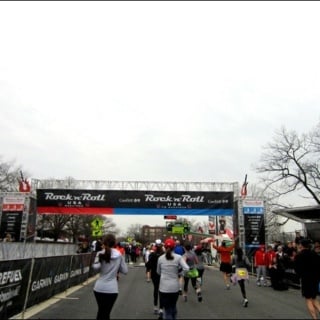 The Importance of Sleep + Tips for Sleeping Better 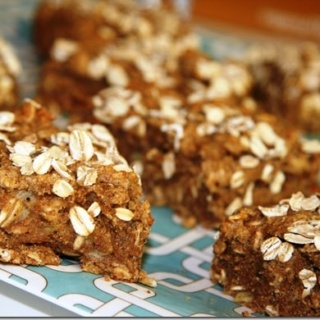 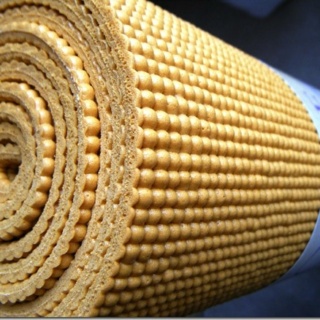