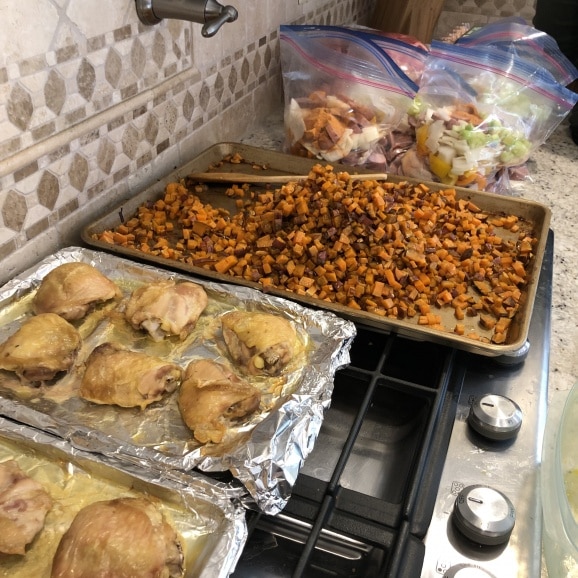 Hi guys! As you may have seen on my Instagram stories, yesterday I attended a meal prep party hosted by my friend Jackie! 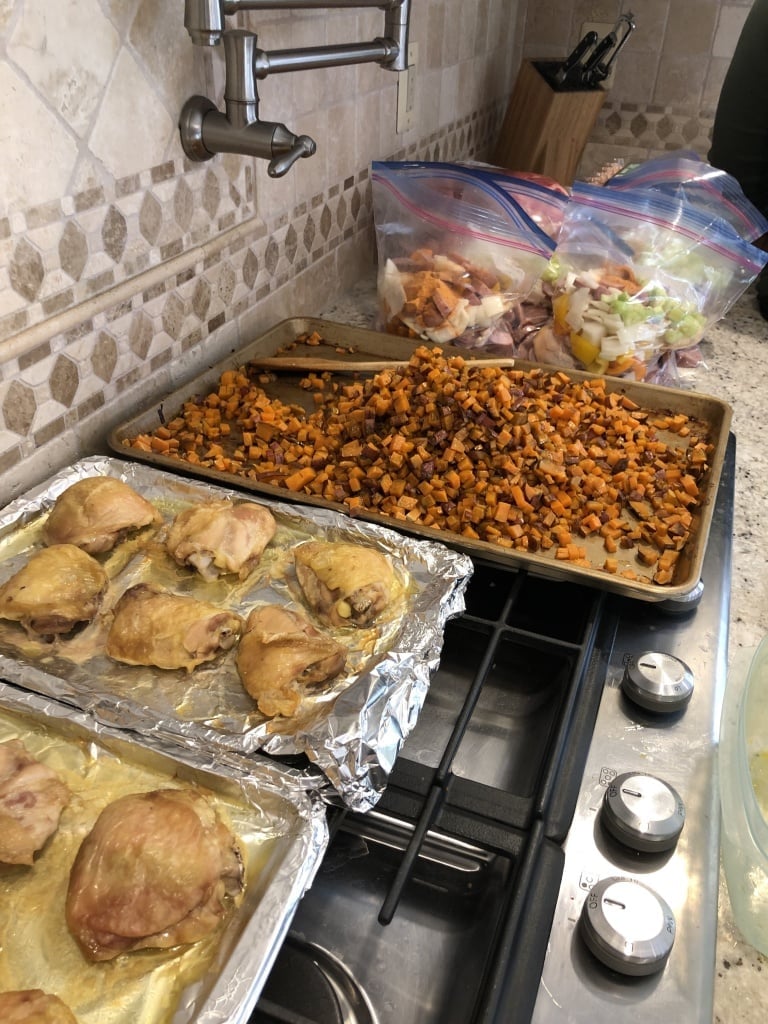 A meal prep party is exactly what it sounds like: a bunch of people getting together and prepping a ton of meals. Jackie hosted her first one of these a couple months ago, and I was super intrigued by it, so when she asked if I’d like to join for round 2 I was all about it.

There were 5 of us, and we emailed beforehand to figure out which recipes to make. We were aiming for mostly slow cooker/instant pot type meals; we weren’t actually cooking the meals, but rather prepping all the raw ingredients and putting them in bags. The bags then go into the freezer until we are ready to cook them! They said the best way to do it is to put the bag in the fridge the night before you want to use it so it defrosts.

Here are the meals we prepped ahead: 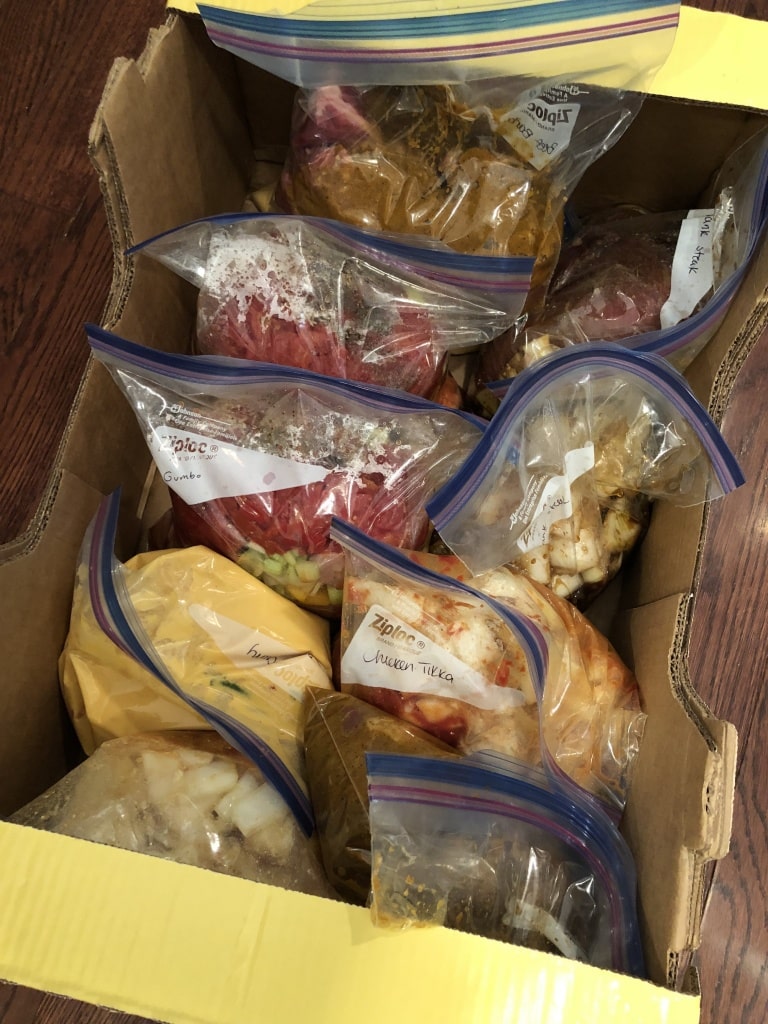 We also decided to prep a bunch of breakfast burritos – 10ish per person. I have a mix + match make-ahead breakfast burritos blog post coming up on Wednesday, so stay tuned for more details on how to make + freeze those! So pumped to have a bunch in the freezer to grab as needed over the next month.

Unlike the other recipes, the burritos involved cooking – we roasted a ton of sweet potatoes, onions, peppers, and zucchini, and also made some bacon and scrambled a ton of eggs. Jackie had the good idea to roast some chicken so that some of the burritos, if we wanted, could be for lunch or dinner. I swapped out the egg in about half of my burritos for chicken – nice to have some variety! 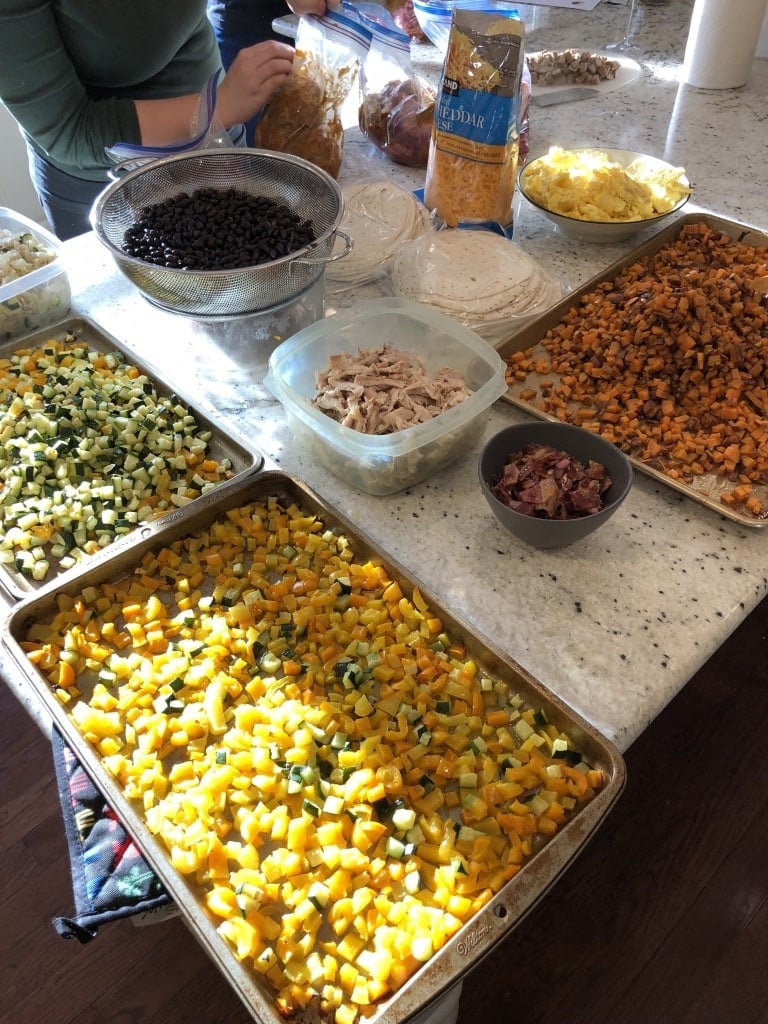 As for how this all worked logistically, Jackie and one of her friends offered to calculate how much food to buy and to do the grocery shopping. (Jackie later told us that she loves grocery shopping and was sad that one of the others volunteered to do it this time – we were all like, next time it’s all yours!)
Once we were all there, we dove right in. Usually the other four were in pairs preparing the raw meal prep recipes in baggies, while I chopped and tended to roasting veggies for the burritos (we each assembled our own once the fillings were ready – this was the last thing we did) and also chopped a bazillion onions. Each recipe AND the burritos called for onion, so I legit chopped 31 onions – I can definitely say I’ve never done that before! It was weirdly meditative to just do the same thing over and over… and randomly only 3 of the onions made me cry. 😉 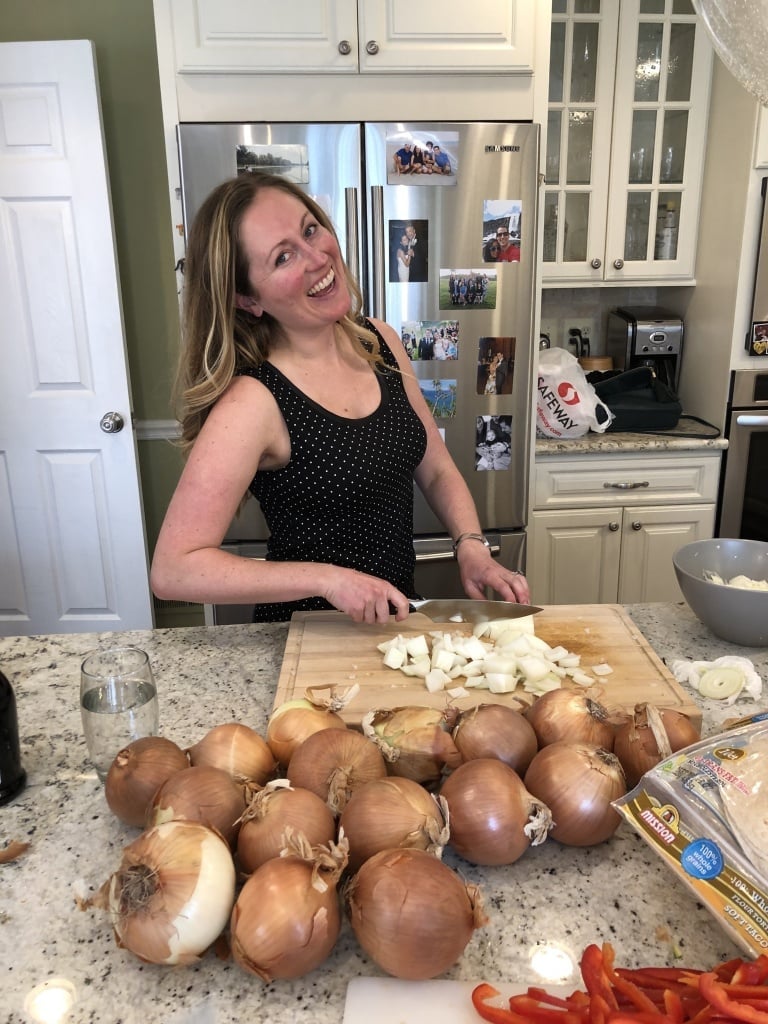 I got onion duty because I was teaching the others my sneaky tip for how to efficiently chop onions! All you do is chop off one of the ends of the onion, peel it, and then place the uncut end on the cutting board. Then, slice down through the onion, stopping just before you reach the bottom so it stays intact. Continue to slice horizontally across the onion about every quarter inch (or bigger depending how large you want the diced pieces to be). Then, rotate the onion so you are slicing perpendicular to the first set of cuts (again stopping before you reach the onion bottom), creating a grid pattern.

Once you’ve done that, simply turn the onion on its side and slice! 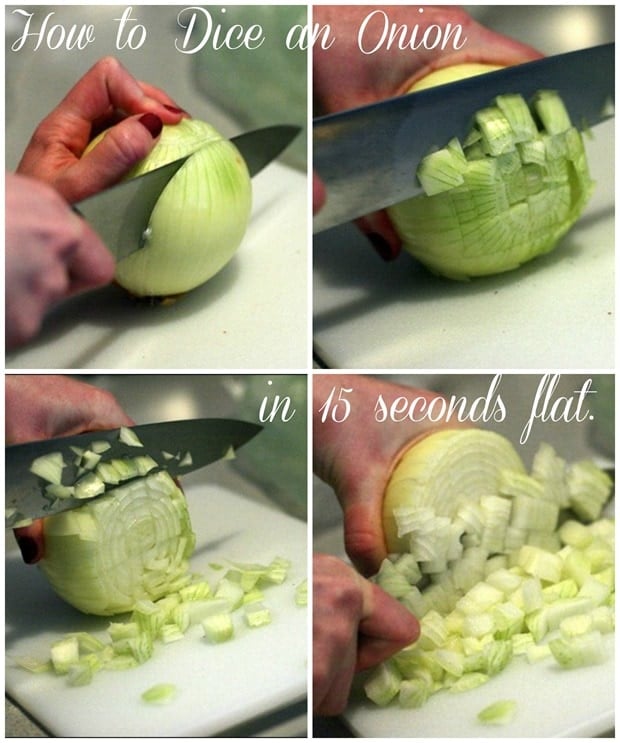 Anyway – a big thank you to Jackie and her friends for letting me crash their meal prep party! This was such a brilliant idea – meal prepping is way more fun (and a lot more efficient) with others, and now each of us have 10+ burritos ready to eat and 5 full meals prepped and ready to cook. Awesome! The only bummer was that yesterday afternoon was randomly warm and gorgeous out – not the ideal day to spend inside prepping food, but oh well! Pretty proud of our freezer game right now, and excited to eat all these meals! 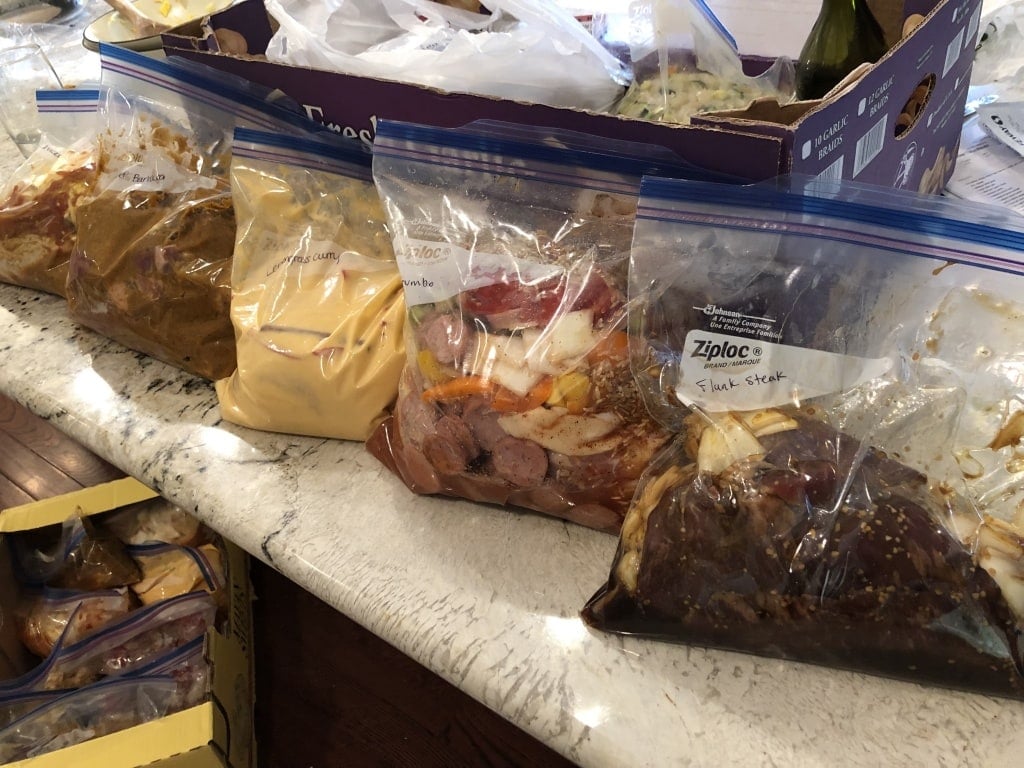 Other highlights from the weekend included a run date with my college buddies Kathleen and Sarah – we were really excited for a warmer morning! 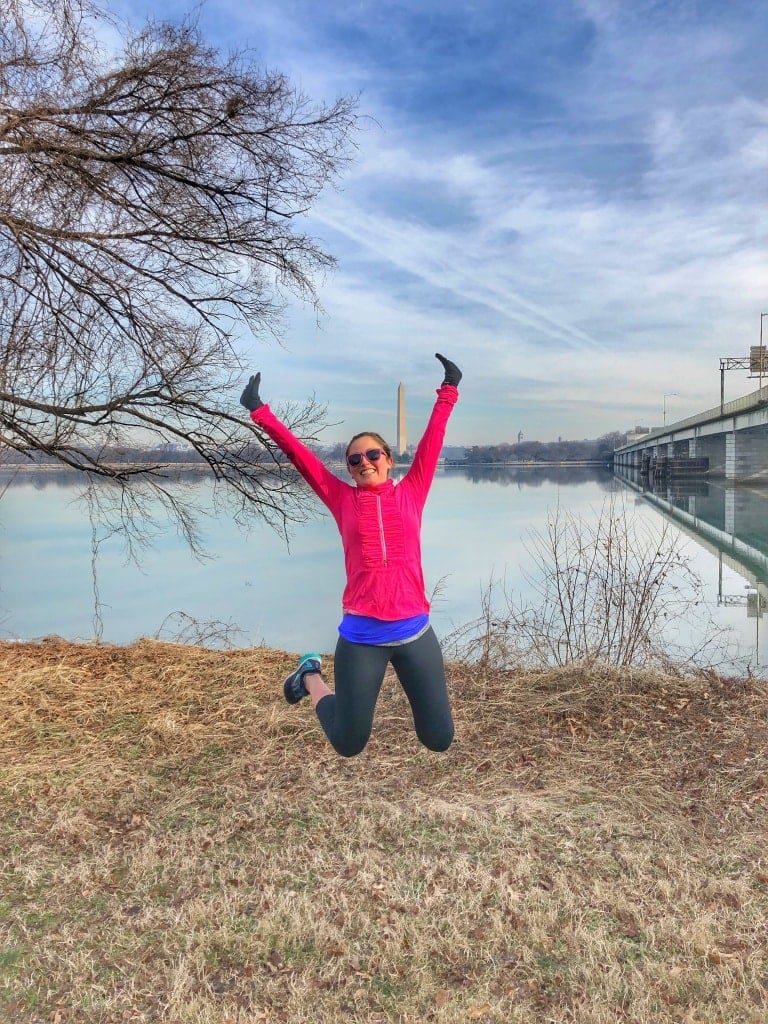 We covered 4 chatty miles. There was still some ice/snow on the trail that was struggling to melt away, so we had to be careful in some bits, but overall it was lovely out there! 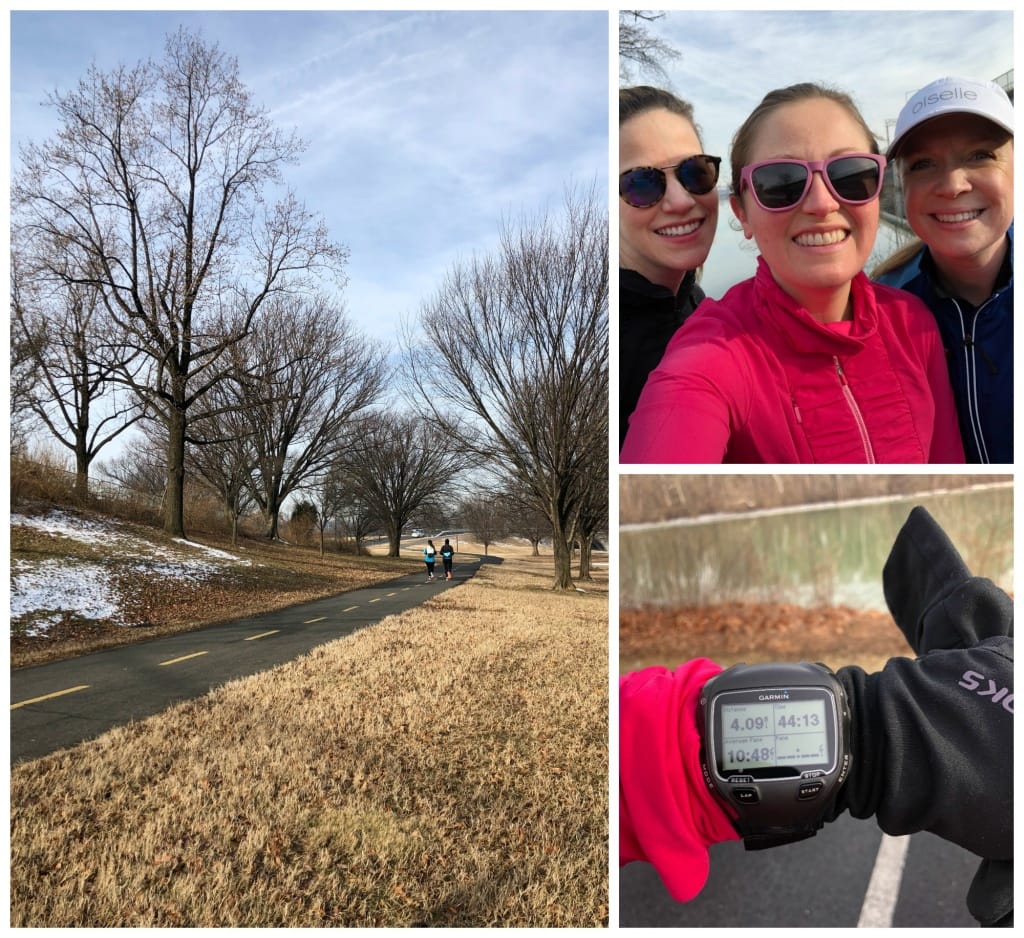 And in other news, Riese had her first bites of pizza on Friday night – Matt and I took her to an early dinner at Pupatella. 🙂 She was into it! 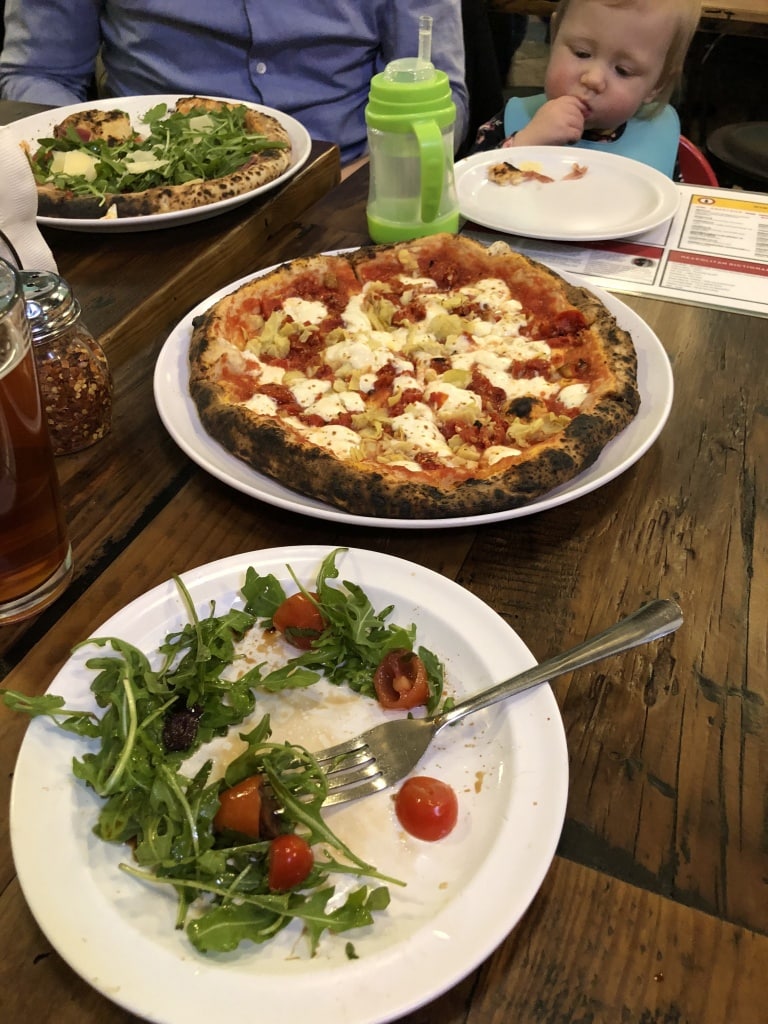 Have a great day, my friends – and for those nearby, enjoy this lovely warm sunshine! I’ll be back on Wednesday with my mix + match make-ahead burritos post – stay tuned!

Have you ever attended or hosted a meal prep party? 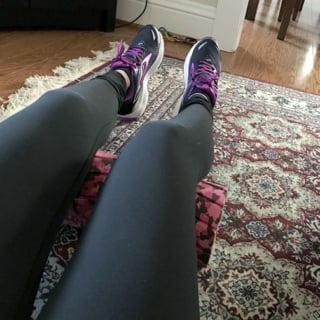 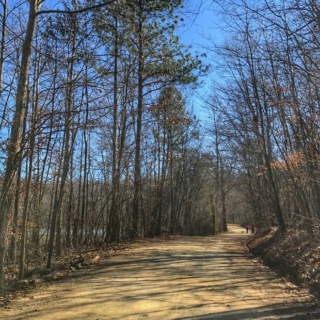 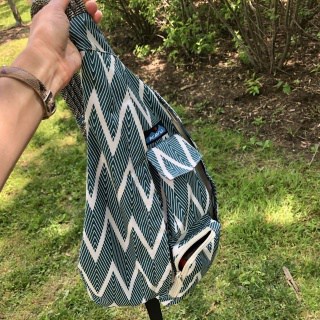 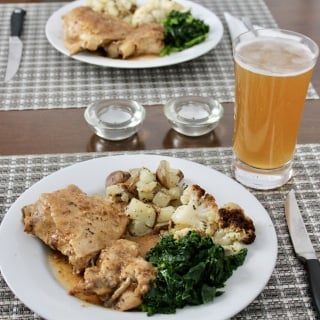